George Sohn, Daisuke Fukuda, and I are at a train station in Tokyo. We've just had a long day with Tamashii Nations, then dinner, and now we are about to take our respective trains back to our hotels.

I say to George "George, when are you going to make a Masterpiece Dairugger?"

"Not gonna happen" he says. "Not enough interest in the character".

Looking back as he is about to board his train, he says "Maybe I will, just for you."

The rest, they say, is history.

George has a habit of not letting on to his plans, and this was probably the case. He probably had a vinyl Dairugger planned all along, but I can't help thinking that it was my idea that spawned this toy. When he sent me the images of the initial toy, I couldn't help feel a bit of pride. This was really happening. We're getting a new Dairugger toy. 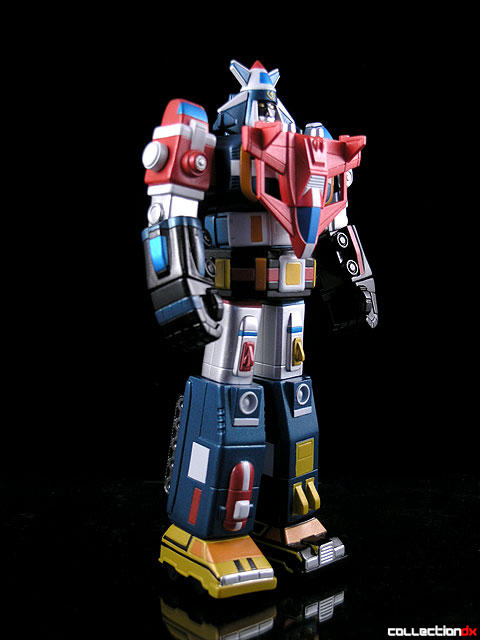 Actually, not ONE, but THREE.

Toynami's Vehicle Voltron vinyl comes in three flavors. Regular, Metallic, and Black. The Metallic and Black versions were released as Comic-Con exclusives, but the regular version will see wide release (when it ships). This version is "limited" to 1,000 pcs, which in this day and age is not really that limited. 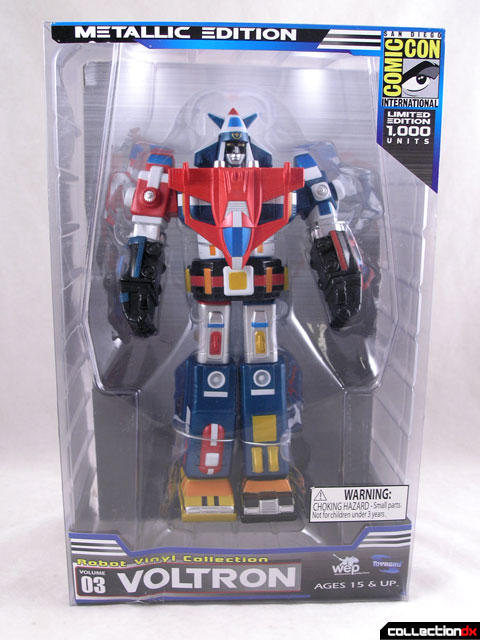 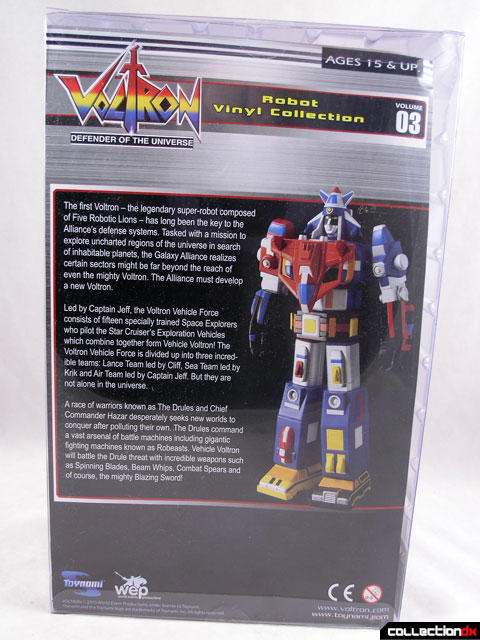 For those who don't know, Dairugger XV (that's fifteen for those of you who can't read Roman Numerals) is the original name for Voltron 1 - the Vehicle Voltron.

It's been twenty-five years since the last legitimate toy of this character. To say I am stoked about this release is an understatement.

Let me start off by saying that just the fact that this exists is cause for celebration. It could have been the crappiest toy ever released, and I would have been all over it regardless. Fortunately, it's not too bad. 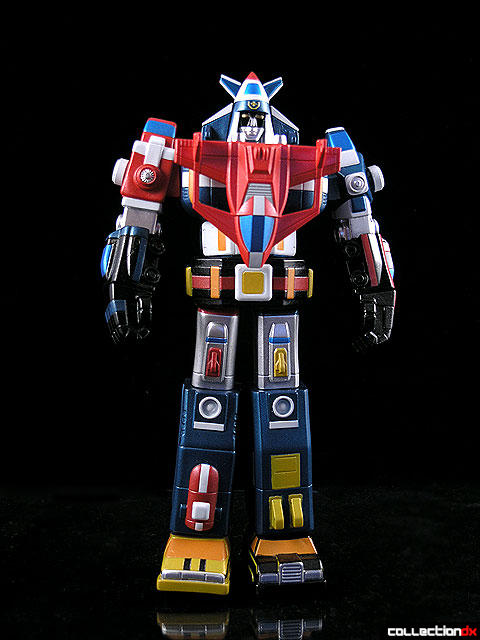 The toy stands 8.5 inches tall and is made entirely out of soft vinyl. The sculpt is cartoony, which either you will like or you won't. The head's a little big for the body in my opinion, but I don't mind that so much. It could be just me looking through rose-colored glasses. 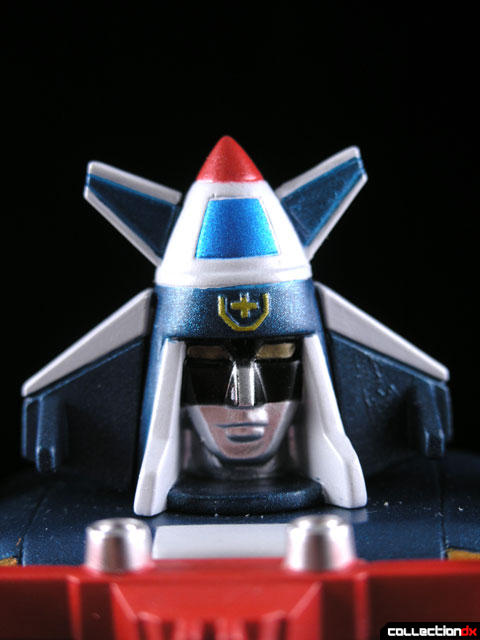 Where this toy surprises is in the articulation. Voltron features a whopping 12 joints, albeit all of the swivel joints. 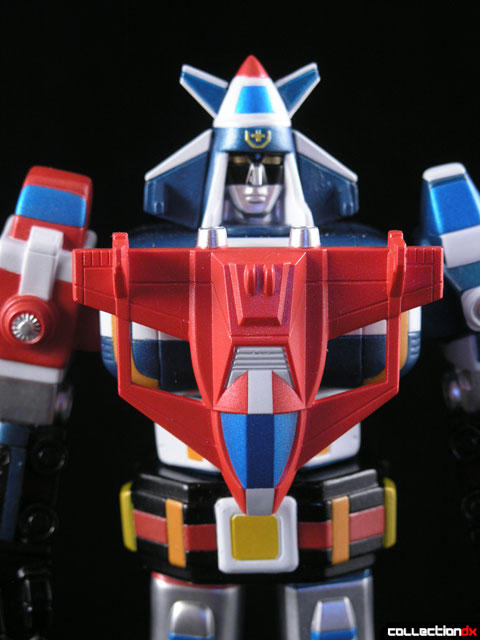 The head swivels, the shoulders swivel, and both the elbows and wrists swivel. With a lot of these joints, you need to apply a bit of force to "un-stick" them. Once loose, they turn freely, sometimes too much so. 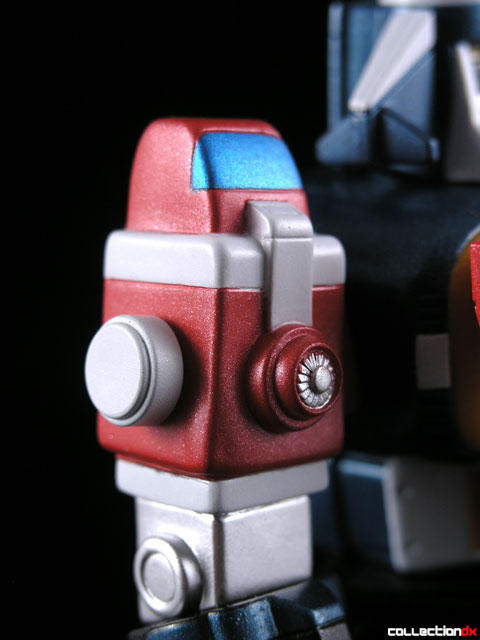 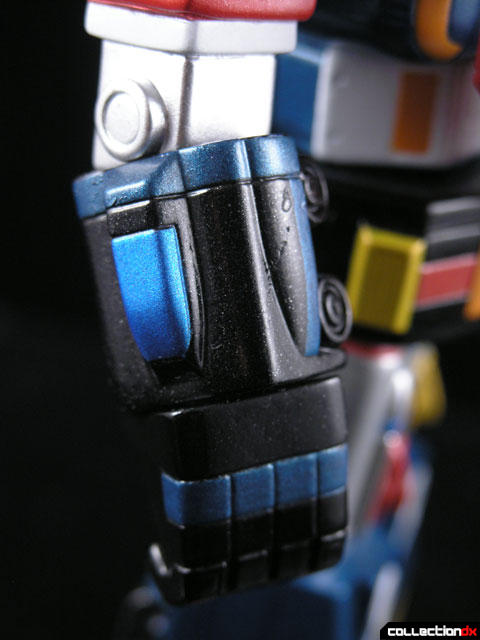 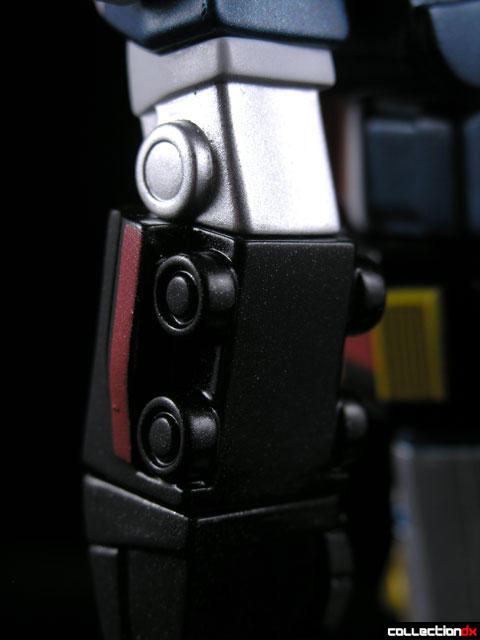 The chest ship is not removable. I tried. 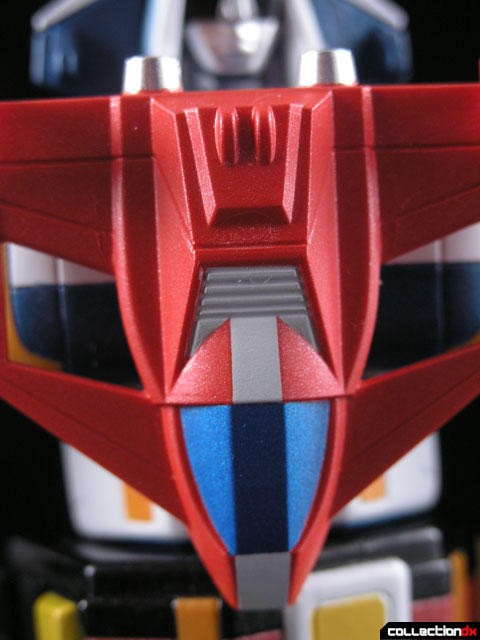 There is a waist joint, and swivel joints at the top of the legs. The knees move a little, but I don't know if that's by design. 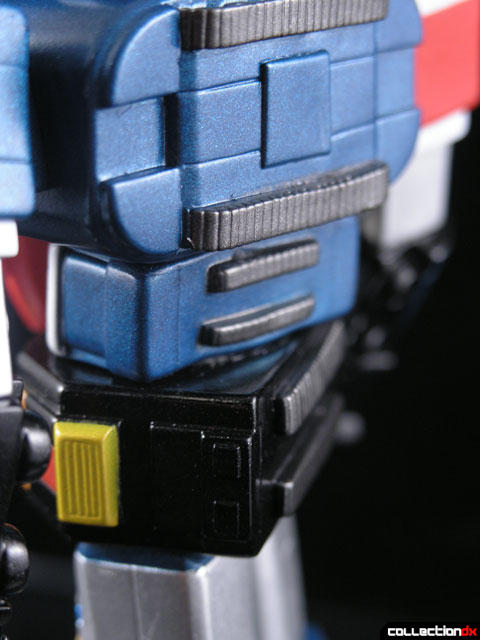 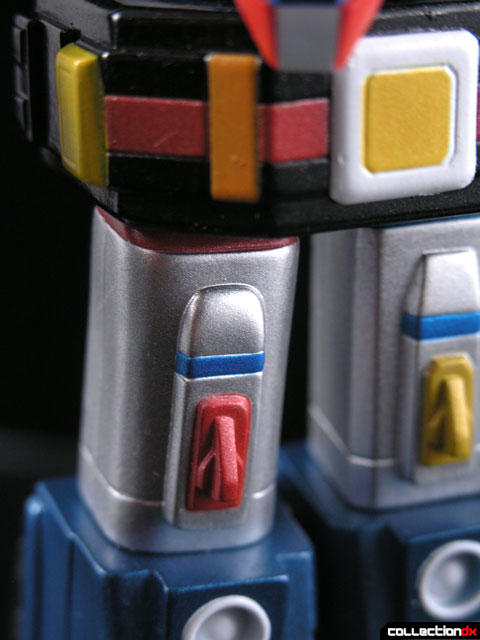 Finally, the feet swivel as well. The joints in the leg, once freed from their initial stickiness, get pretty loose actually. 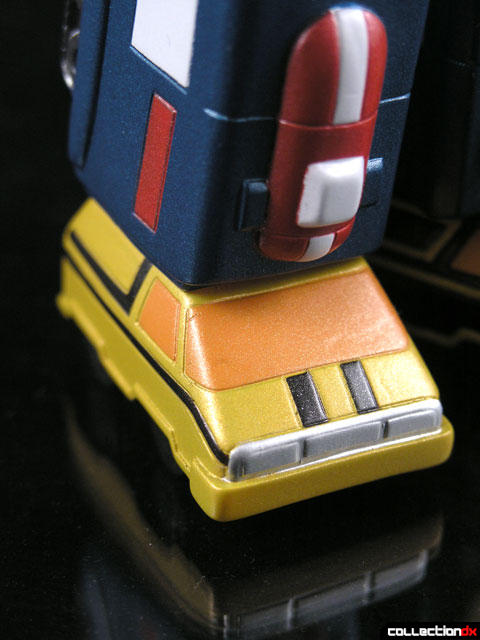 Paint detail is awesome. I'm actually kind of bummed that this isn't the regular release. The metallic coloring is fantastic. The metallic blue looks like the old Popy metallic blue. Mix that blue with the solid colors of the anime version and you have a winner. There are a ton of paint apps, right down to the detail on the tank treads on the back. 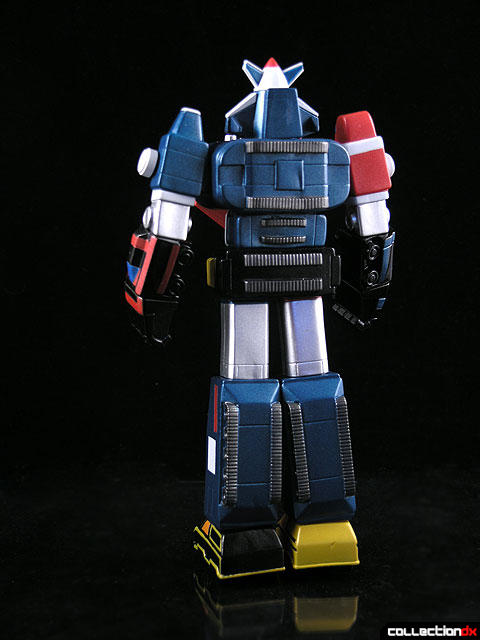 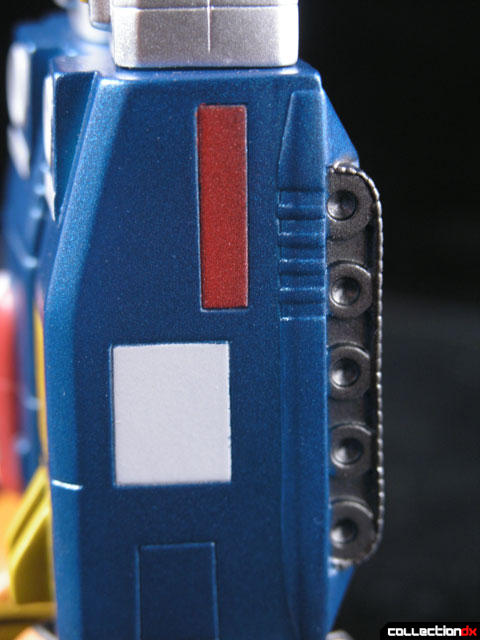 One glaring omission is the Blazing Sword.

Another is the propellers on the shoulders. I know, in the anime Voltron 1 in combined form had no propellers (Until he used them as weapons), but we all grew up with the toy more than the show. We love and need those propellers. Thankfully, the Jumbo release will have them.

(You can thank me for that as well.) 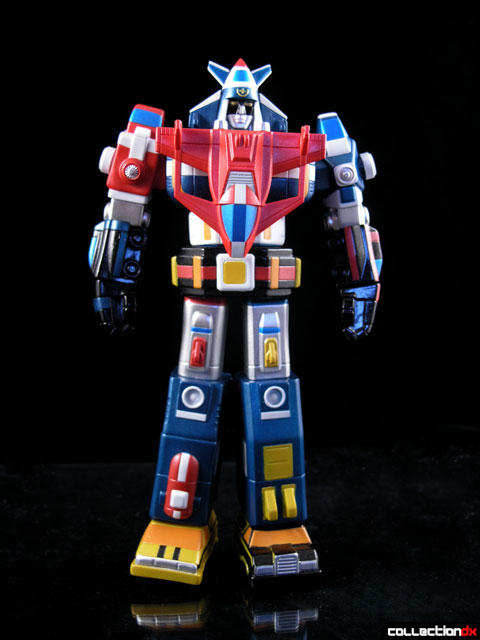 I love to have this on my hands, to bad i'm from South America, no Comic-Con here hahhha

Well i have the first voltron Vinyl Collection and also have the stickness and then loose joints, also the Battlepod regults specially on the canons!

And thanks JoshB for make this toy possible!!

I'm still wondering whether to buy this or not as I've never watched Dairugger XV on TV.

Another winner from Toynami!

Josh, thanks for making these new Dairrugers possible. Although everyone knows I'm a daitarn freak, there is no comparing when it comes to Voltron especially if you've seen my collection. My dairugger department is sorely lacking so Seeing new stuff come out makes me very very happy

That he should go over to the battlepod guys and ask about demand.
"If you build it they will come. . . "
Or at least try a new poll on the Dairugger XV.
I'm almost sure Toynami would get support for it.
I mean I'm totally stoked over the lion voltron, but I've always loved the vehicles more.
IMHO they were more versitile and its more bang for your buck.

The quest for supremacy shall never end. . . .

still waiting on a gokin or masterpiece dairugger...