In the 1994 anime series, Macross 7, Captain Maximilian Jenius makes his amazing return to the cockpit of a Valkyrie with his very own VF-22S Sturmvogel II. The high performance machine, codenamed "Blue Gazer", is equally matched by the skills of its pilot.

During my initial review of the VF-22S Gamlin Type, I noted that the toy came with a decal sheet featuring the names of Max and Millia Jenius. Rumors circulated that Yamato Toys would release the pair of appropriately colored VF-22S units, and only a few months later they were announced. 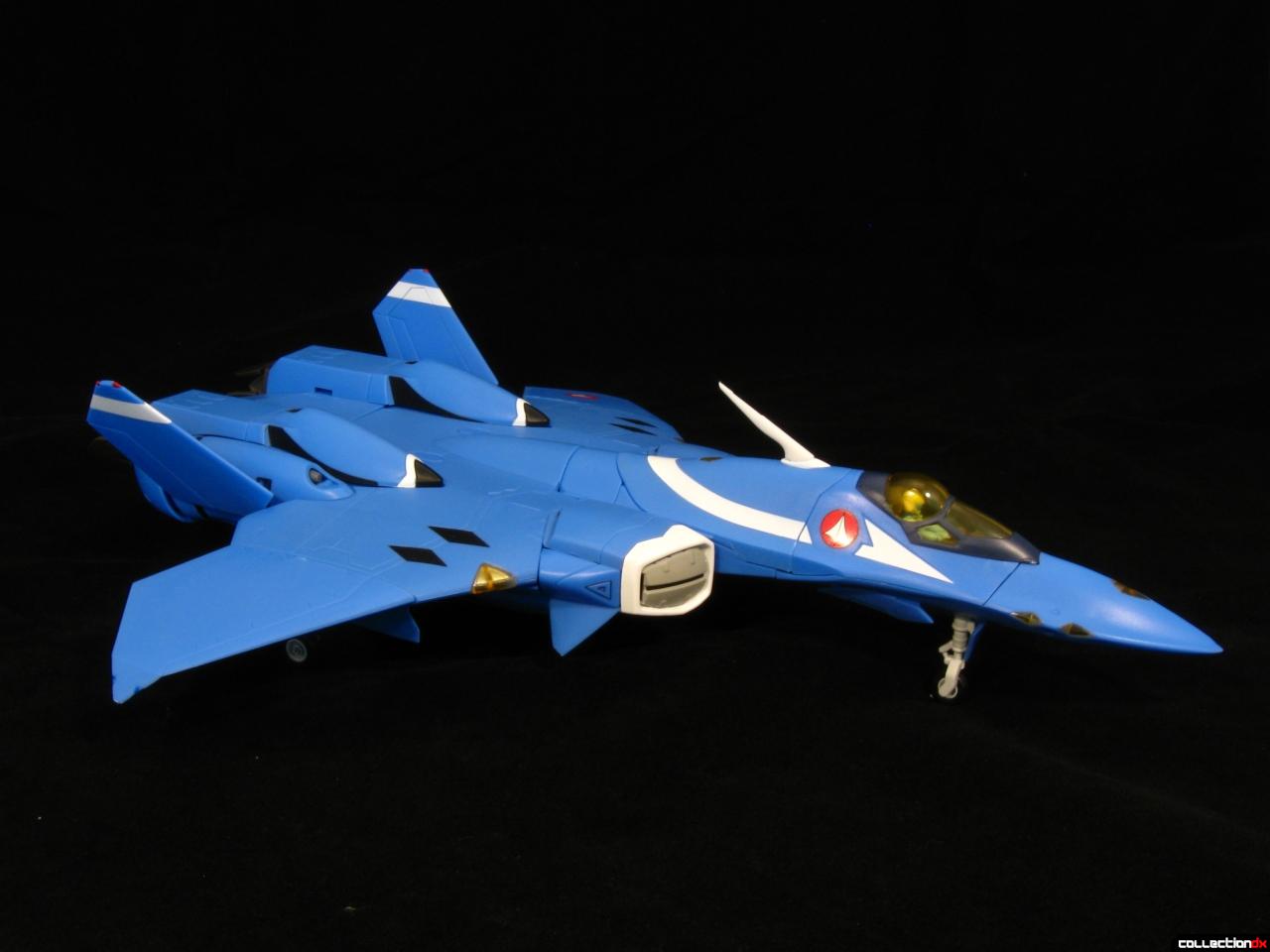 In the fine tradition of Macross toys, this color variation of the VF-22S is no different than the previous release. The same toy, however, with its tightly packed limbs tucked away in the sleek styling of a stealth fighter take on a decidedly different look when rendered in powder blue. 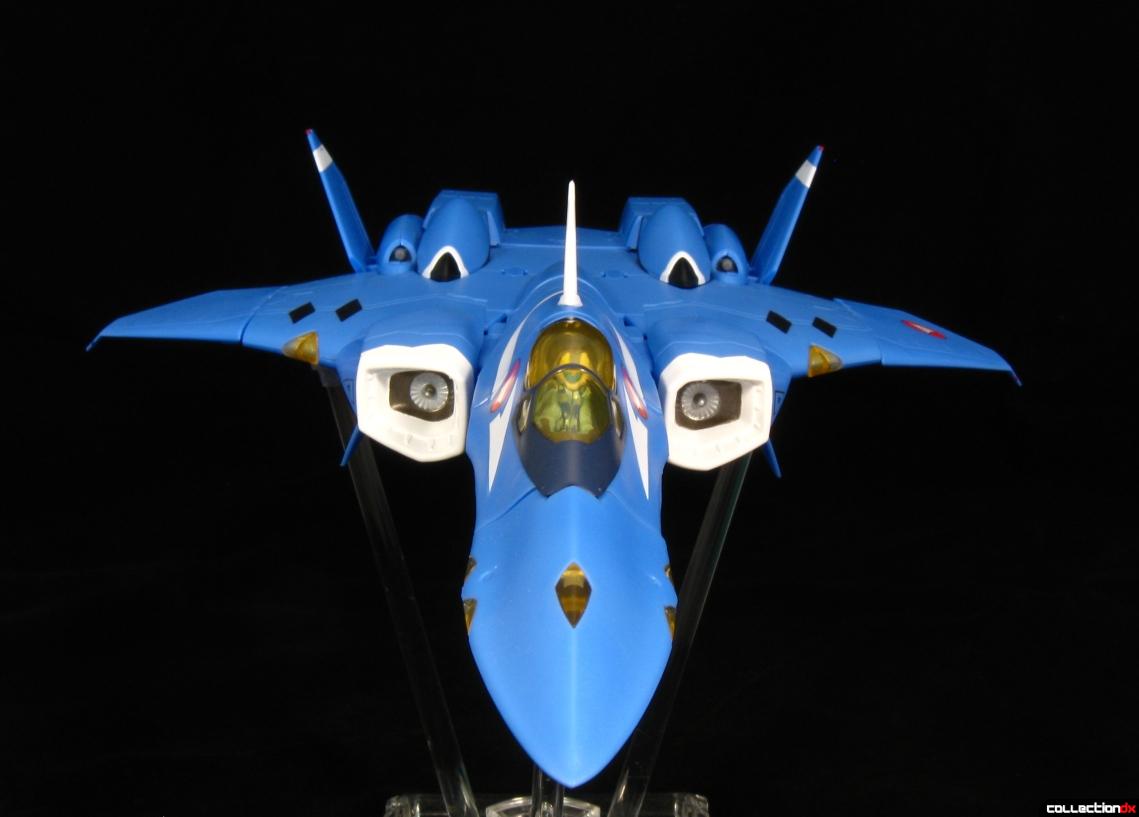 Much like the Gamlin type, the Max type uses a singular color for all of its many little clear parts. In this case pale yellow bits dot the craft's blue body. Under some lighting conditions the yellow can appear a little weak, but I've found that under good lighting the yellow is quite complementary. As you can see in the photo, the VF-22S features removable intake covers like most modern Macross toys. Do note, however, that they are cast in blue plastic and painted gray. 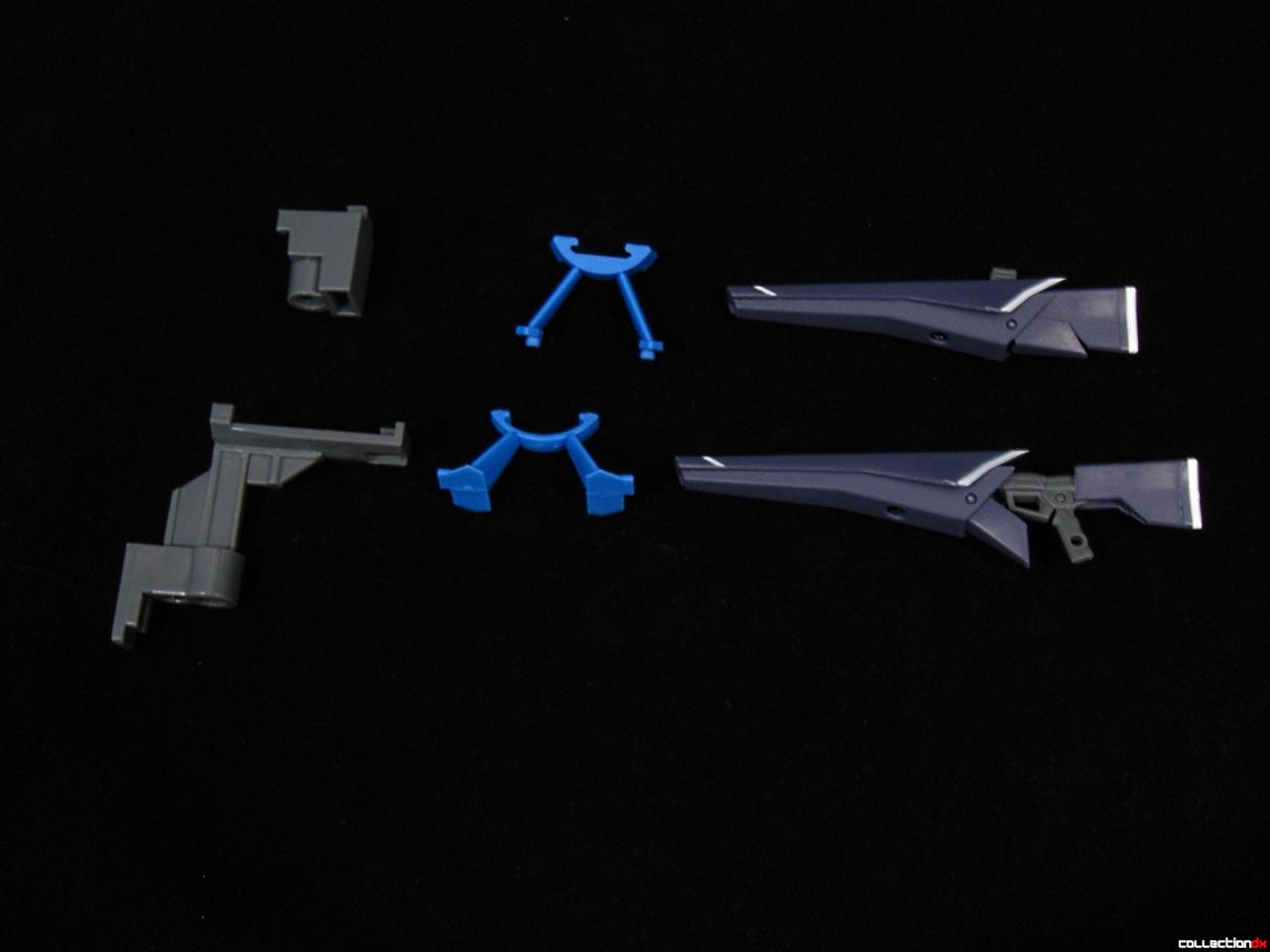 This toy comes with a few accessories including the stand adapters, fold booster mounts, and two gunpods. The piece in the upper left is the Battroid mode stand adapter and only works with the type of stand included with the YF-21(initial release) and Sv-51 toys. The one below it is for GERWALK and Fighter mode and works with the Yamato Macross stands, the Mighty Block stands, and the YF-21/Sv-51 type stand. 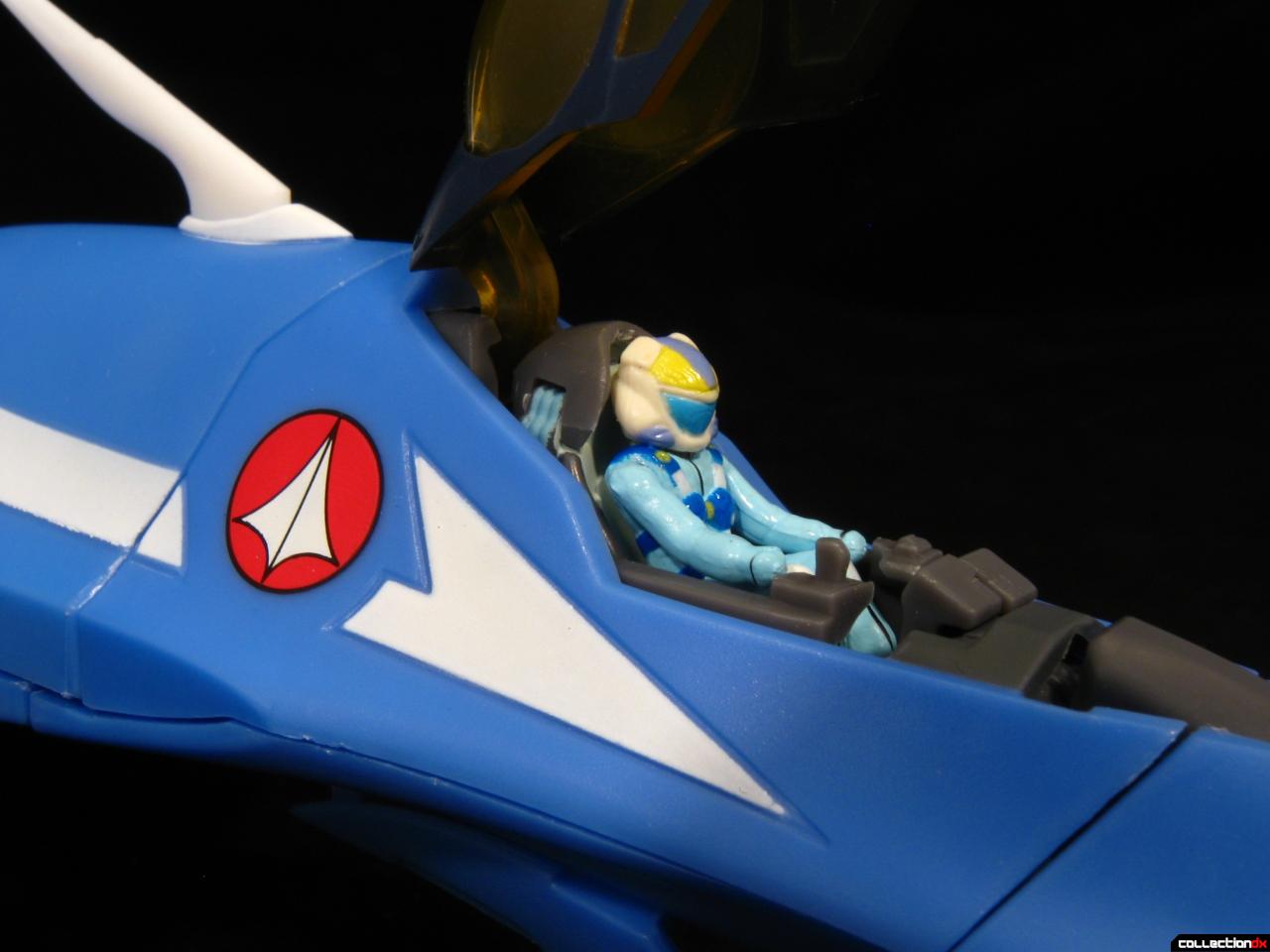 The figure comes with an appropriately dressed Captain Maximilian Jenius. This is the same figure that comes with the Gamlin Type. 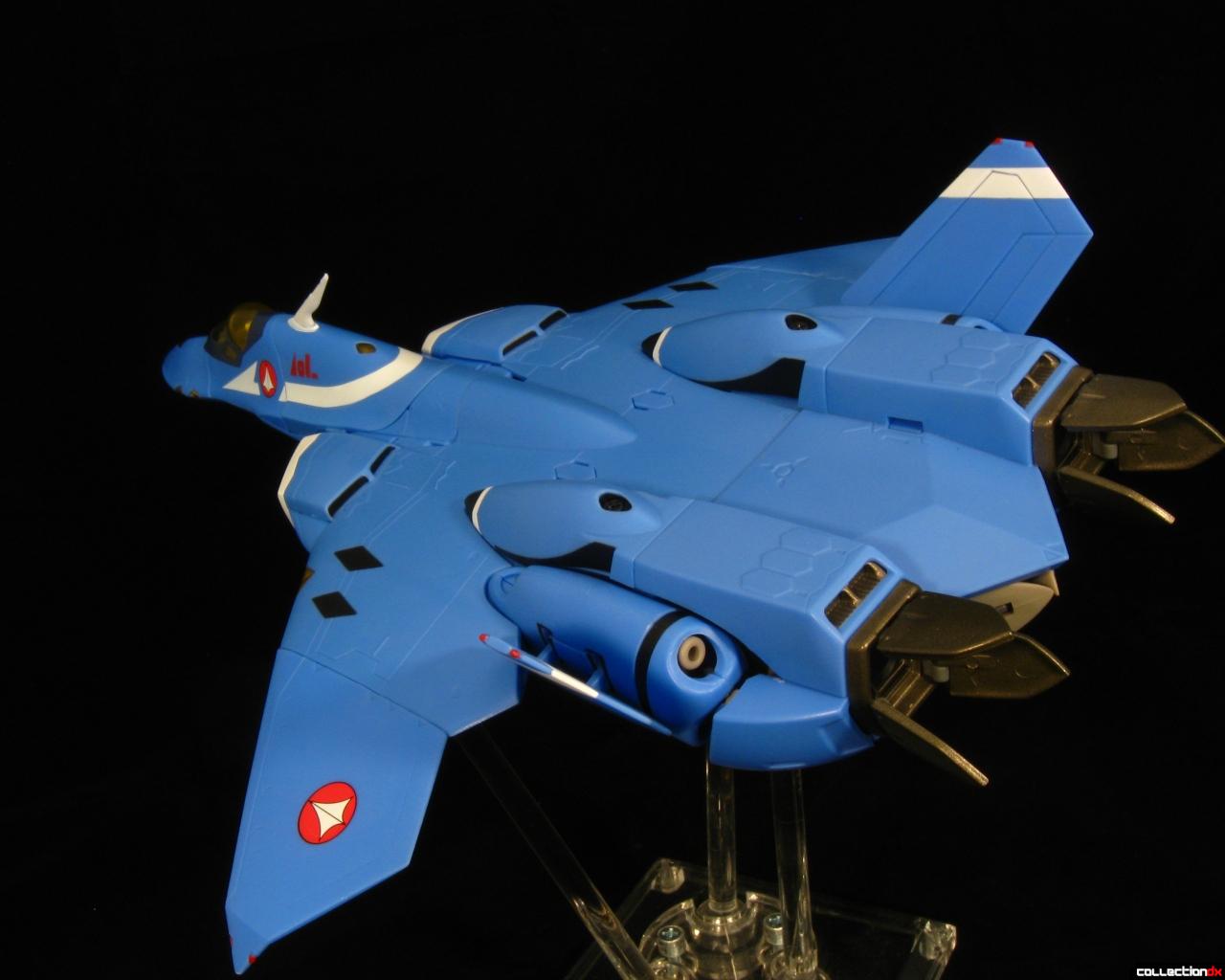 The blue plastic that constitutes the majority of the toy's construction has an excellent matte finish, which captures the look of the anime. 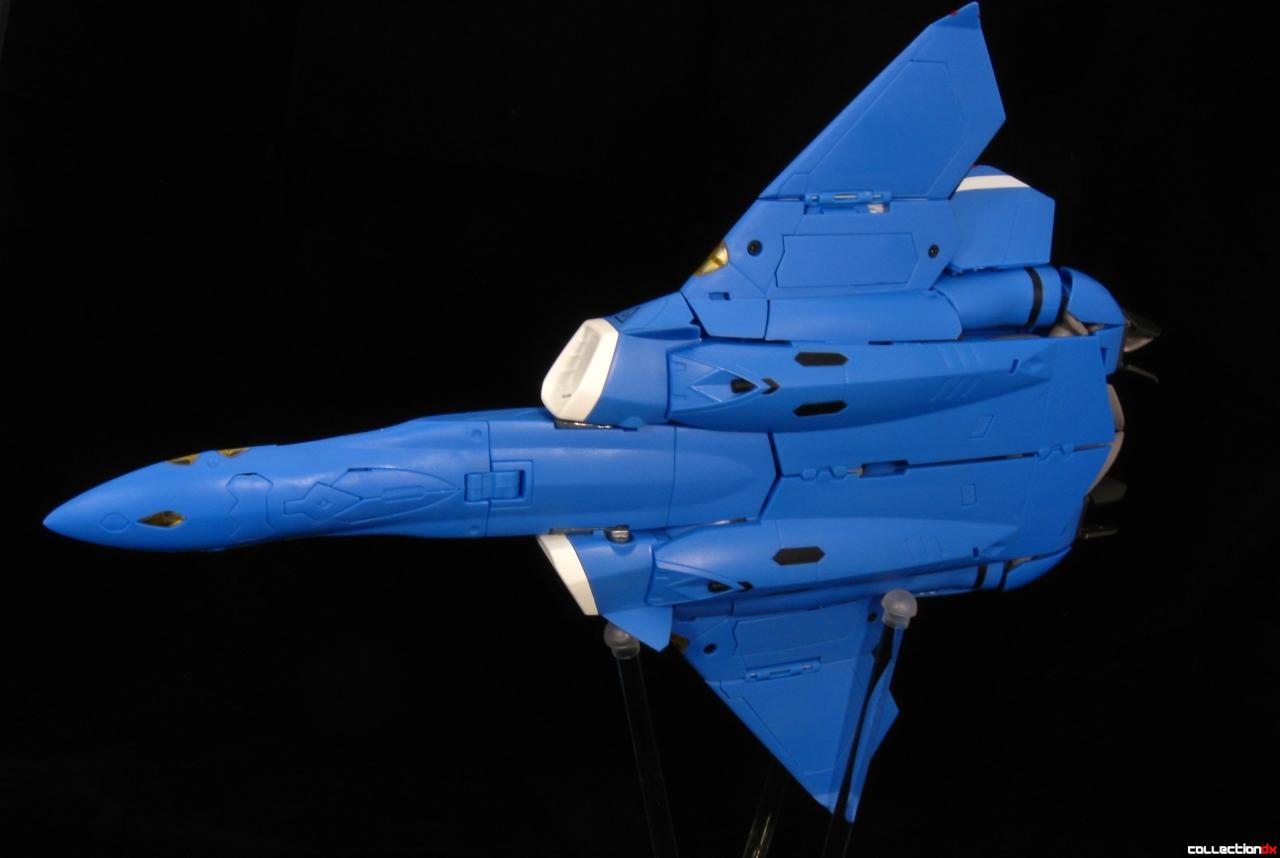 One notable change between the YF-21 and VF-22S is the new ventral plates, which store the craft's twin gunpods internally rather than externally. Well, in theory at least; the toy does not have a slot for the gunpods. Rather, it simply has them as a permanent detail. Still, the effect of the new panels is quite nice as the VF-22S is appropriately sleek from below. 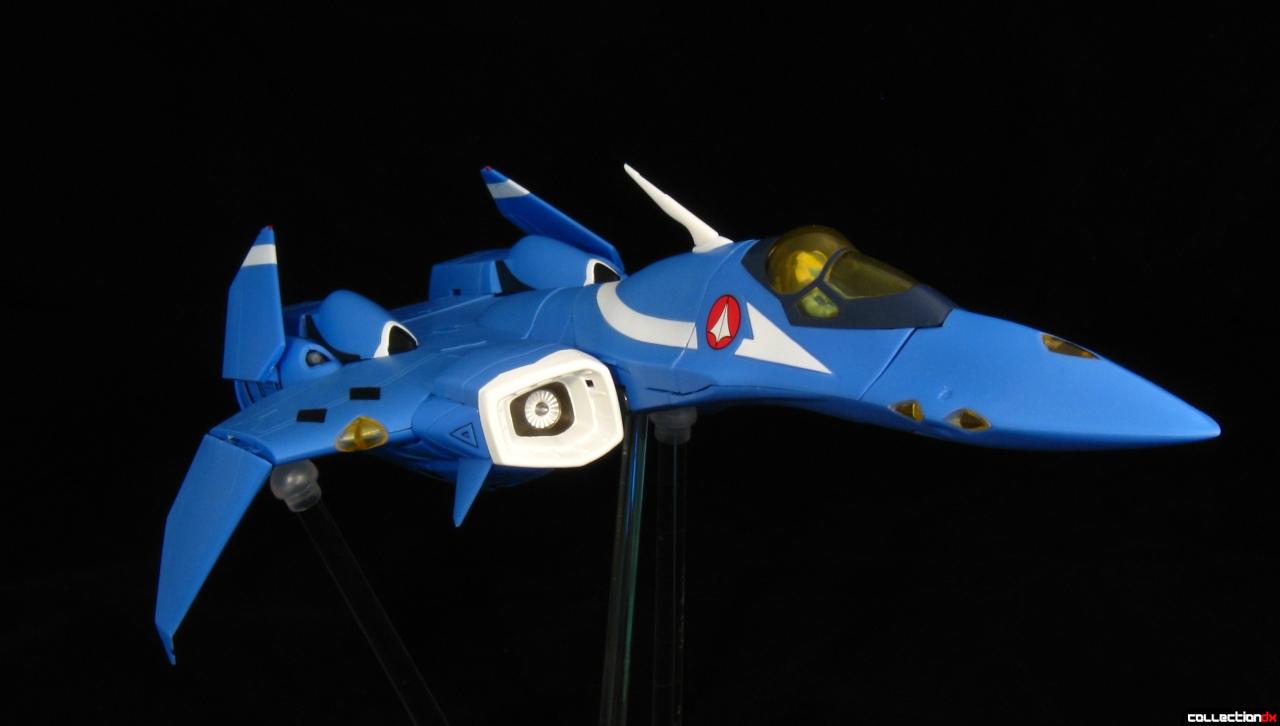 Due to the toy's transformation, you can also replicate the more aggressive high-speed configuration by canting the wings and tail fins.

A note on the transformation: The VF-22S (and YF-21) toys all feature the same transformation, which I can best describe as being both straight-forward and somewhat fiddly. Please check out the video at the bottom of this review for a better look at how to switch this toy between modes. Now, I must admit that I've transformed this toy (and the Gamlin type) a lot so I might be some kind of expert. Honestly, I've found that it's something that takes a few tries before you figure out how all the individual bits interact, but still manages to have an intuitive quality once you look at the whole picture. The robust joints and numerous locking mechanisms for each mode make the whole experience quite satisfying. 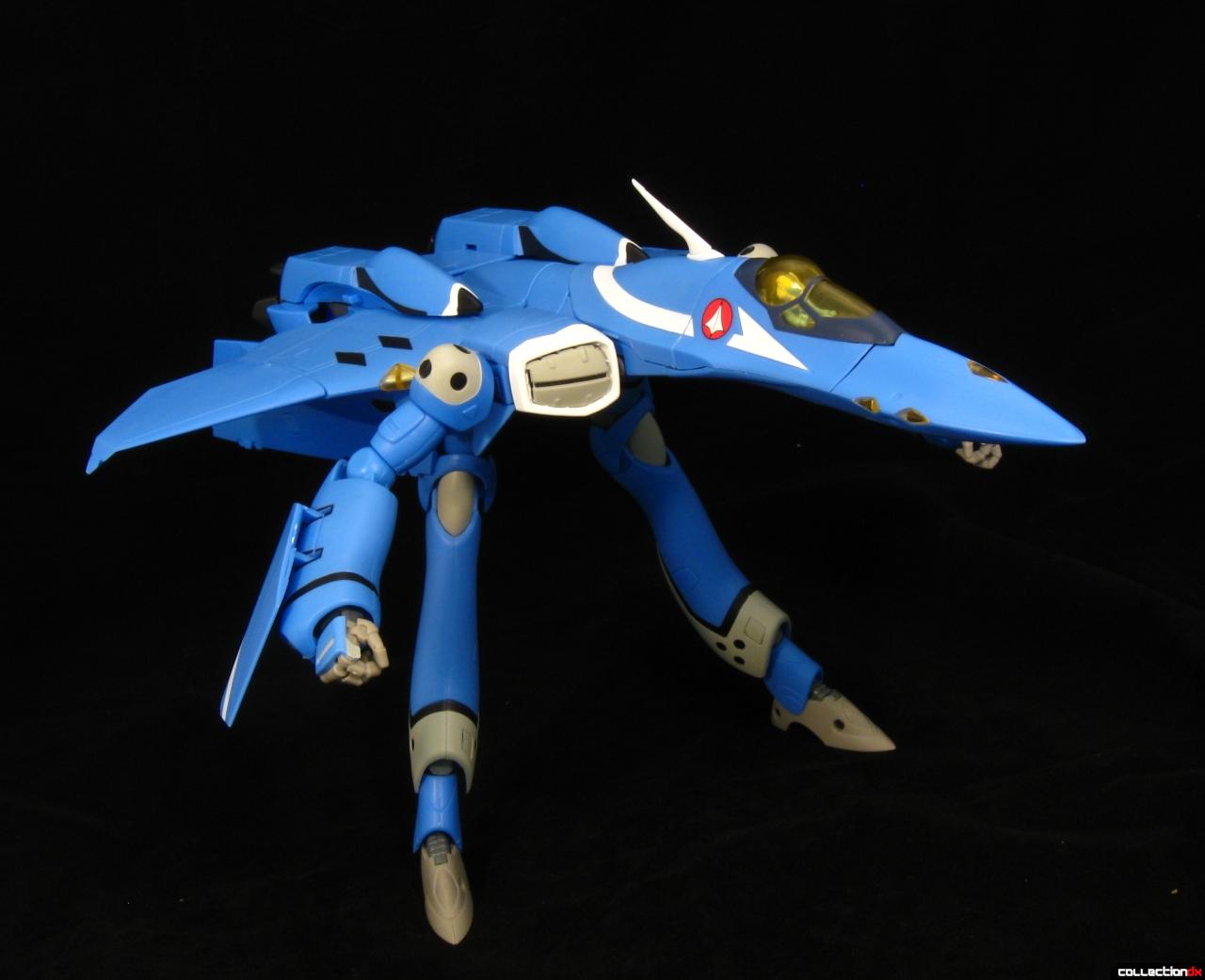 The GERWALK mode on the VF-22S is probably the most evocative of the "airplane with arms and legs" notion put forth by this iconic half-form. Balancing the figure on its bird-like legs isn't much of a problem, due to numerous ratcheted joints and swivel points in the thighs. 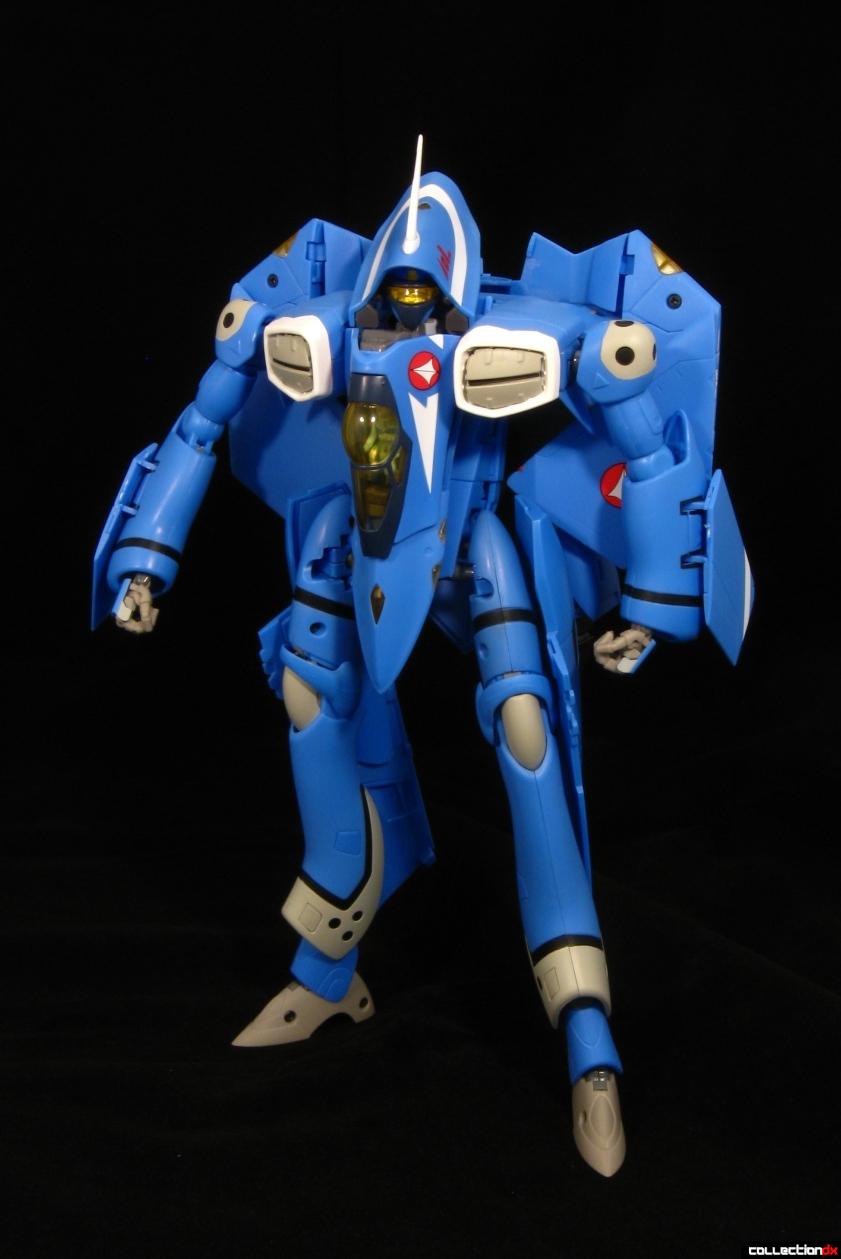 Battroid mode is where the VF-22S starts to show its unique origins. Conceived as a variable version of the classic Macross design known as the Queadluun-Rau, the VF-22S combines with familiar form of Valkyrie fighter with the styling of an alien power suit. The matte gray accents work especially well in this mode. 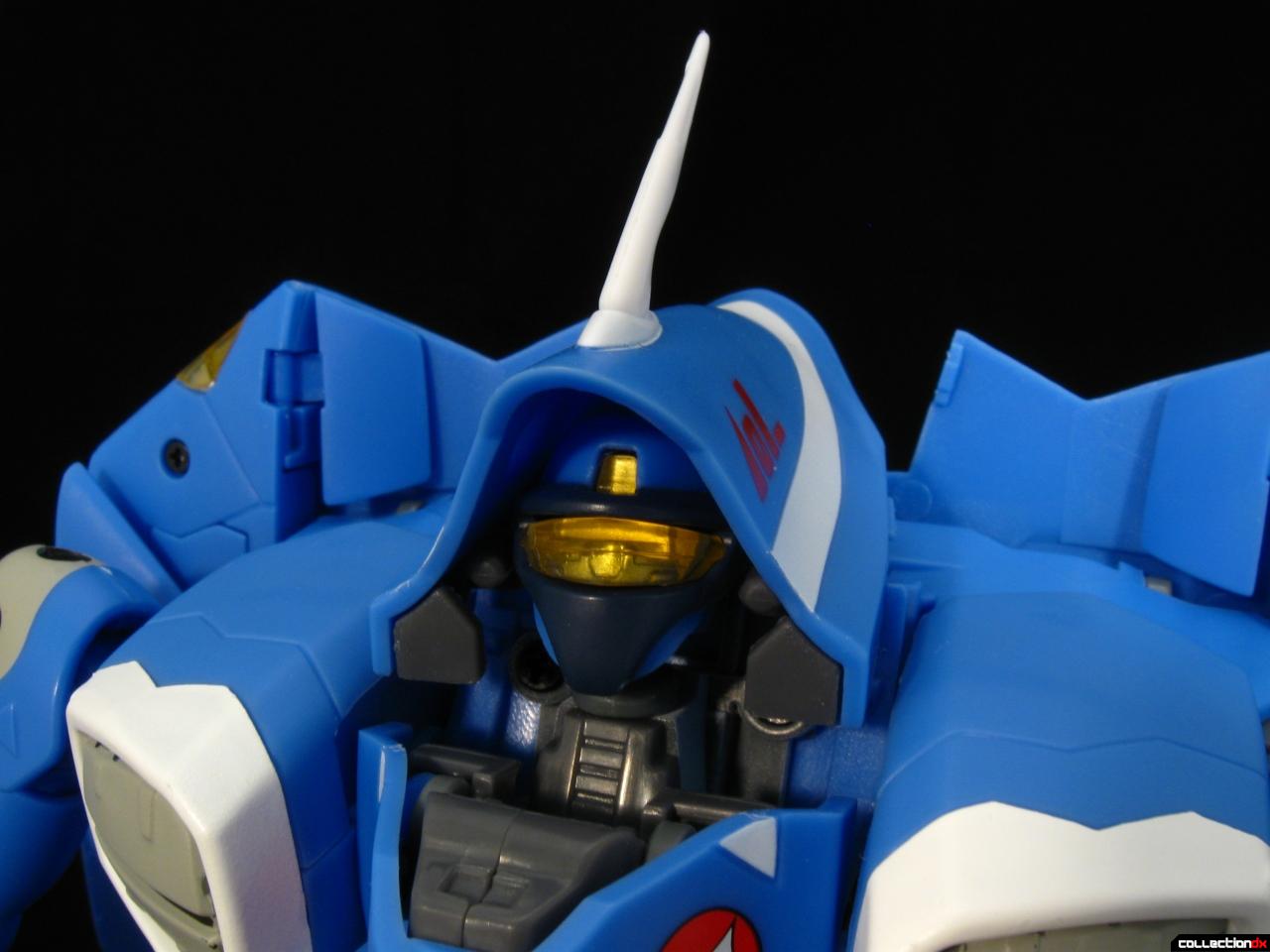 The face of the VF-22S is a simple but well done homage to the classic commander type Valkyrie such as Roy Focker's VF-1S. The majority of the face is painted in dark blue with the bare light blue plastic framing the center. Clear yellow plastic placed over simple mechanical detailing serves to represent the robot's eyes. 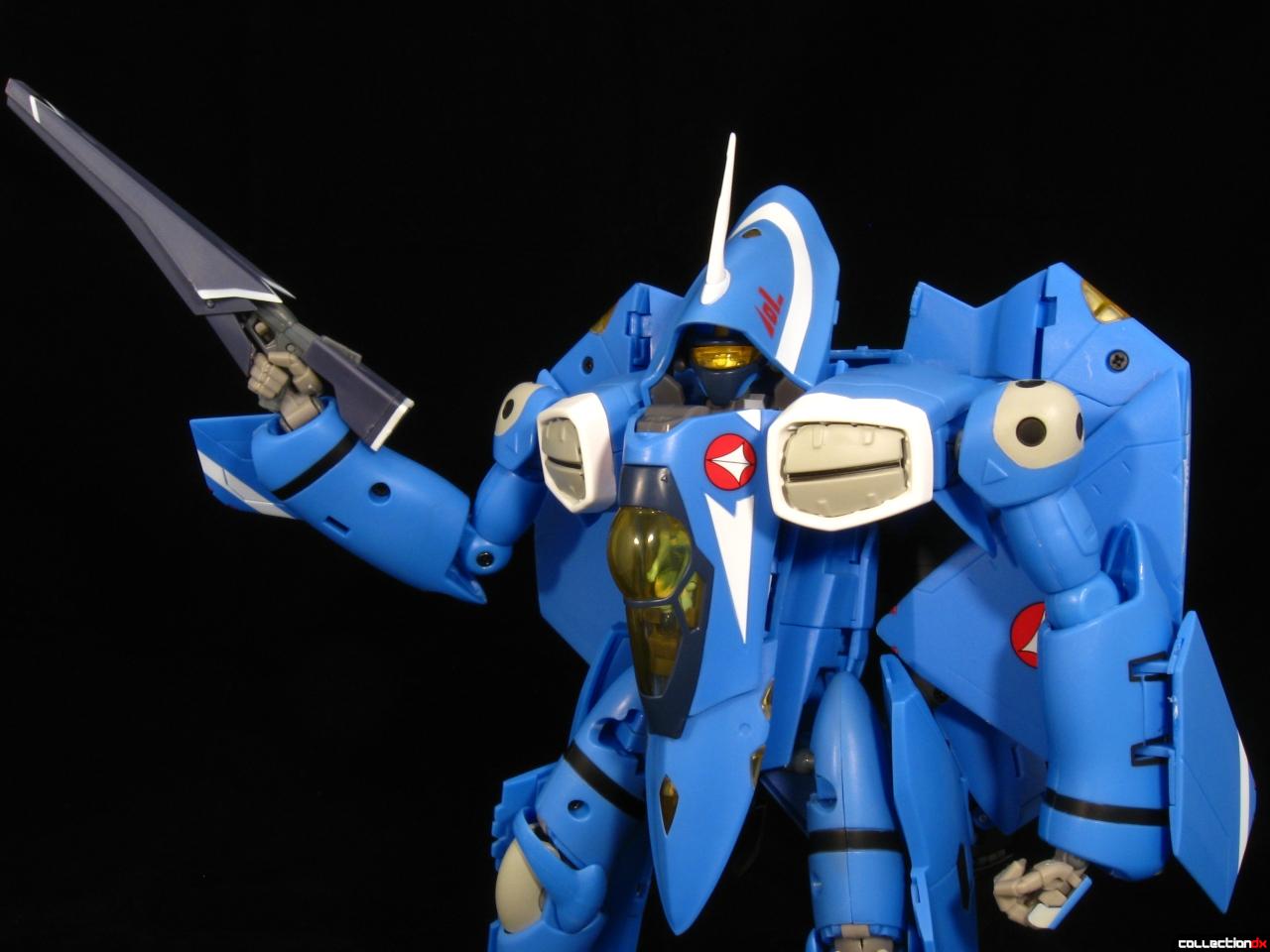 The gunpods can be fitted onto a peg in the palm of each hand. While I've never been wild about these futuristic dustbusters, they don't look half bad in the hands of the toy. 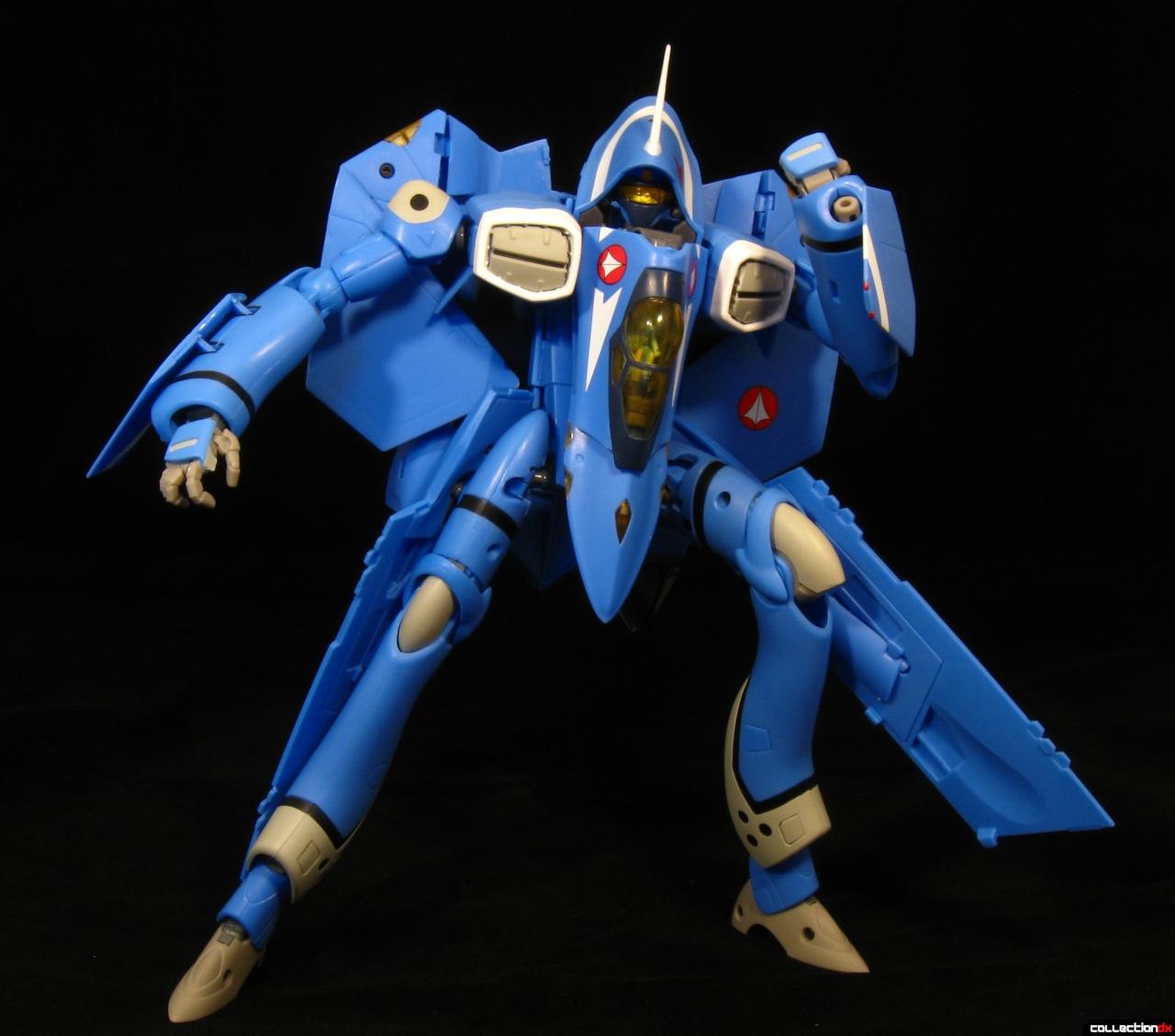 Despite the unconventional proportions, the VF-22S can achieve some dynamic poses. Most of its major joints are done with satisfying ratcheted joints. 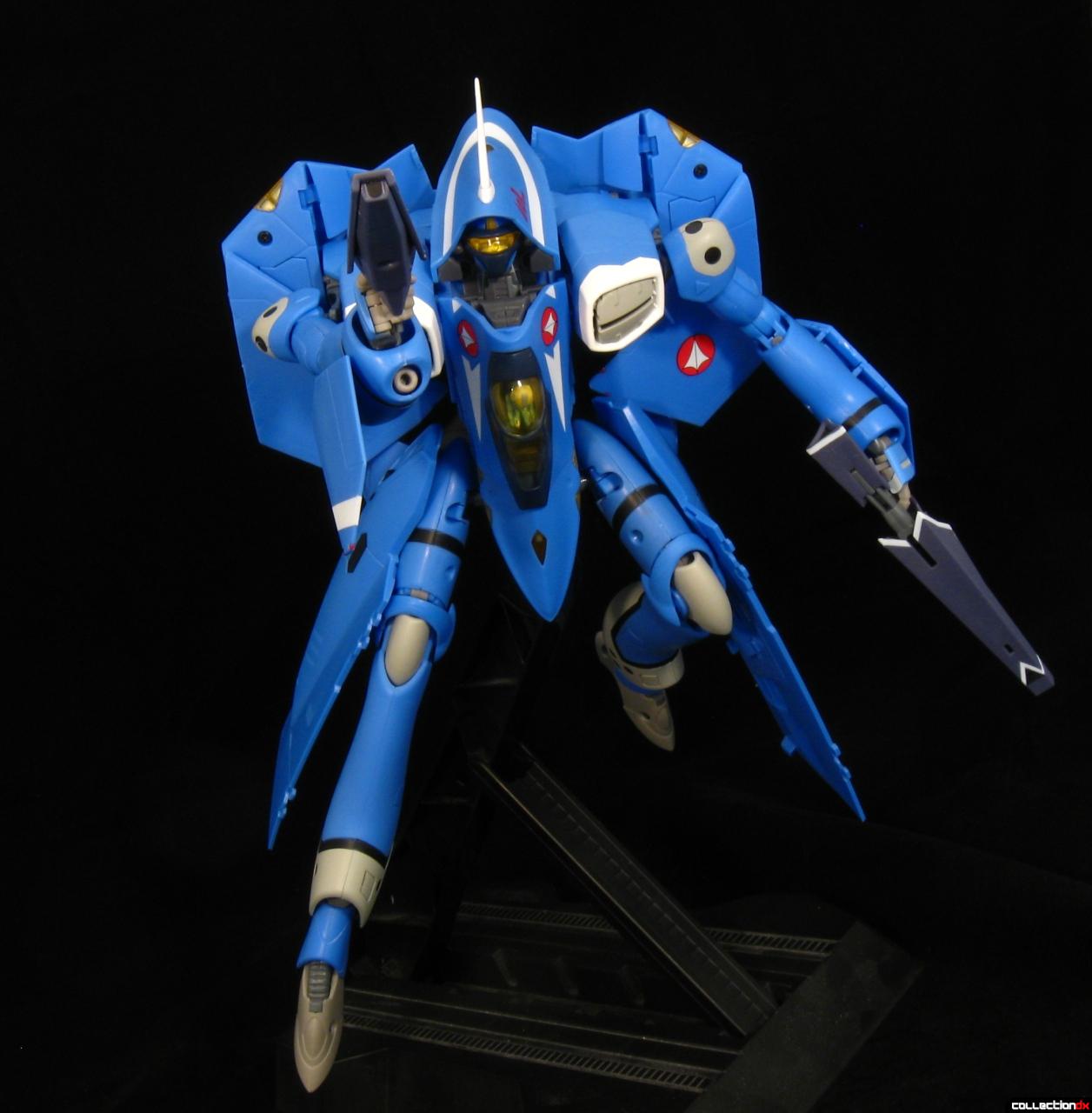 The VF-22S also comes with an adapter for the large flight stand which was included with the Sv-51 toys and the first releases of the YF-21. As an aside about these stands in particular, they are very straightforward in design and kind of ugly. They're also quite large so I can see why Yamato opted to not include them on any of the VF-22S or the future re-releases of the YF-21. Still, they does the job. It's just that they don't look very pretty while doing it. 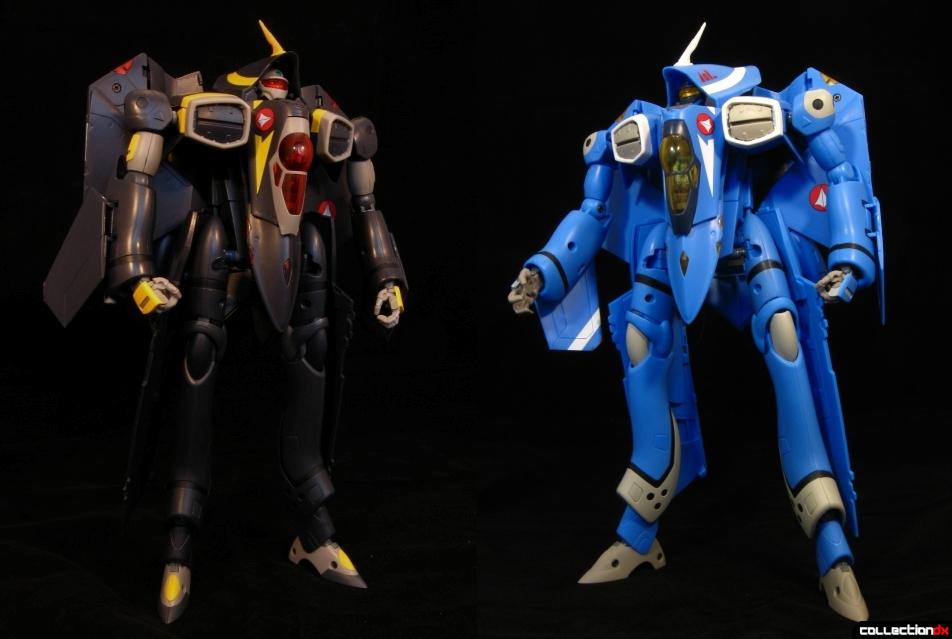 It's quite a contrast seeing what two different paint schemes can do for this toy. Despite my unrequited love of Gamlin and his VF-22S, I can't help but think that Max's machine commands a more indomitable presence with that blue. 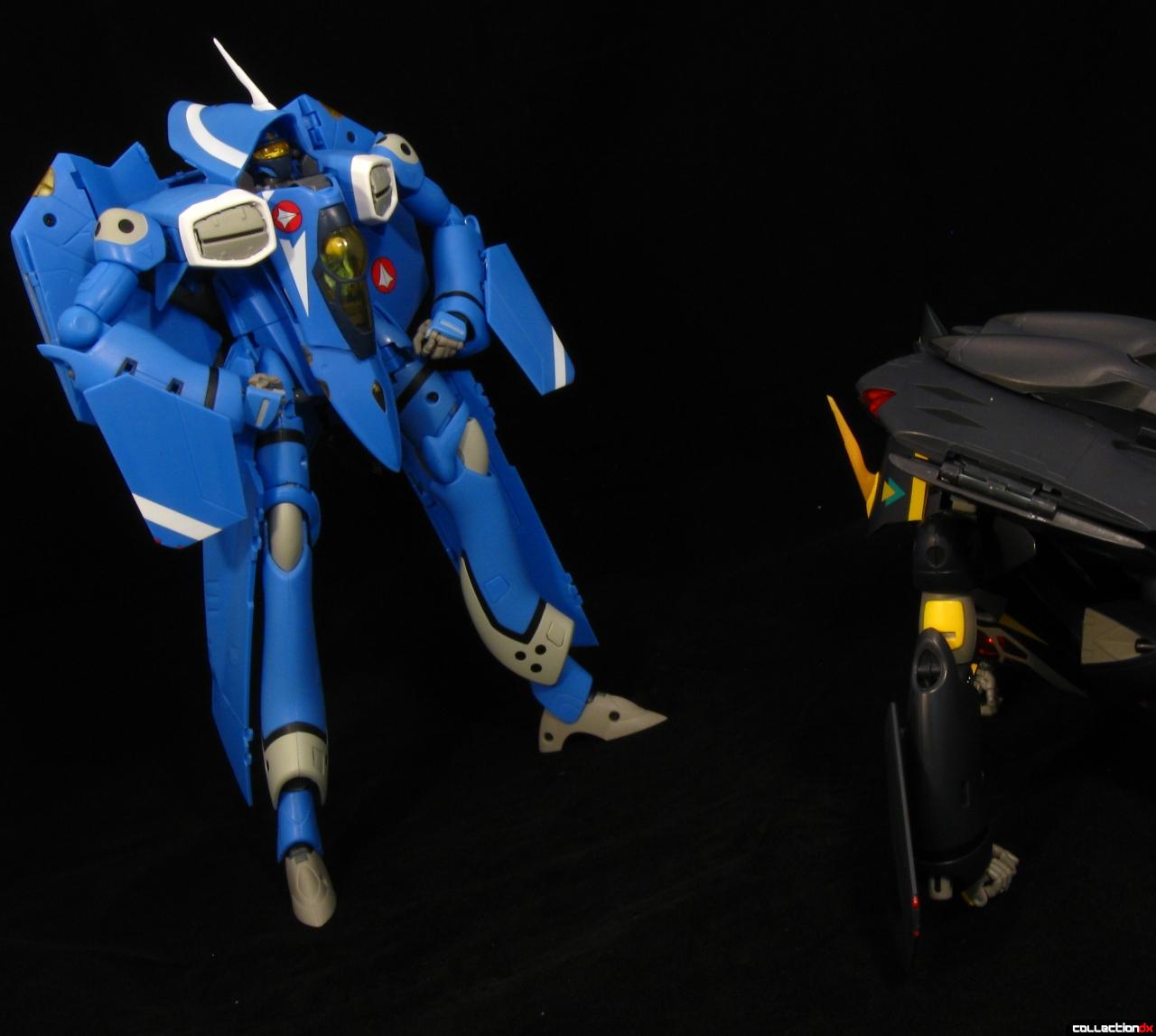 In the end I feel that Max's VF-22S is the real reason for why these toys were made. The Gamlin type was a much appreciated entree, but now that Captain Max has arrived I feel as though I have found the true colors for the VF-22S.

At least until I get my hands on Max's better half.

9 comments posted
This is such a pretty shade

This is such a pretty shade of blue to look at...

Very nice review Andrew. This has me looking more closely at these designs.
Please bring this if you can to the summit or whatever next show-n-tell oppurtunity.

The video is great, and part of what's making it appealing. You come across as happy, and positive about this toy. The transformation steps were pretty quick and concise. Enjoyed it.

"You come across as happy, and positive about this toy."

I hope that says a lot about the toy. Especially considering that was like my twentieth take for the video over the span of few days.

I'm hoping they do a VF-11B in Milia colors eventually (http://www.macross2.net/m3/macross7/variant-vf-11b-milia.htm) as that would look awesome side by side with the Max. Not as keen on Milia's VF-22S as that would mean I would have 4 of them lol

Good review as always, will probably pick this up eventually when I can get some spare cash in my pocket again.

This thing sure looks great and the colors scheme is quite eye catching. I'm thinking about getting one of these, since it's an awesome toy.

Love the part about the "futuristic dustbusters"
^ ^
Thanks for the review.

I'd love to get the VF-22S max but its hard to justify having a double since I have the YF-21.