It's a great time to be into Transformers. Whether you like them because of the movie or because you grew up with them, you have a variety of choices at the moment. For the classic style lovers of the line, not only do we have Generations and Reveal the Shield but if you look overseas for your collection, you will find the United line by Takara. United is basically a mix of Generations and Reveal the Shield with the majority sporting a fancy paint-job compared to their Hasbro brethren.

Today we are looking at UN-06 Optimus Prime. Don't try and find the US version as it's not available. At least not yet. It is a reused mold but still cool enough to fit right in with a new line.

It comes out of the package in robot mode. The first thing you'll see is that nice candy apple paint-job. Then you notice it isn't carried over the rest of the figure. Takara does their best to match the plastic to the paint, and somewhat succeeded by using a pearly red plastic, but then they went ahead and also used another regular solid red that doesn't match at all. It has a very classic G1 Optimus Prime look to it. It also has a pretty nice rifle that completes the look. 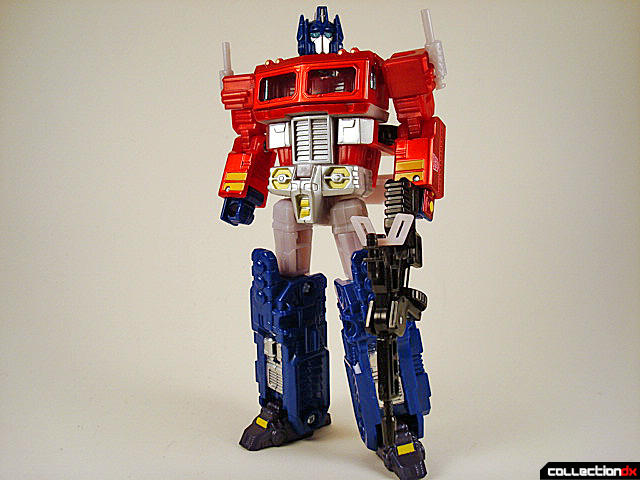 If it wasn't for the strangely shaped "backpack", it would be a pretty clean figure. 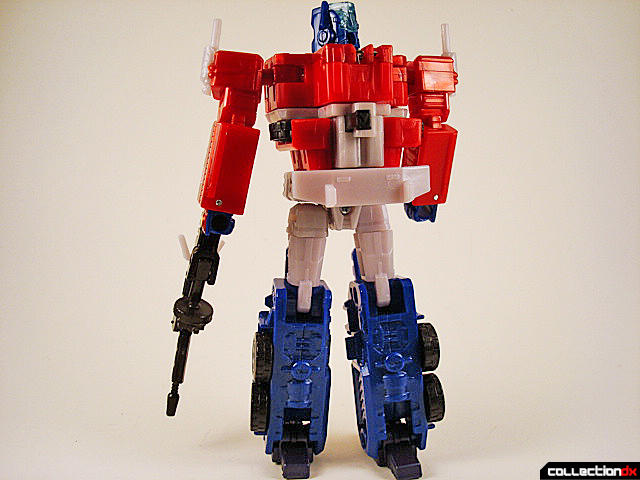 Again, the face has a very classic look to it sans the vents. In place of the center vent on his forehead, he has a four pointed star. 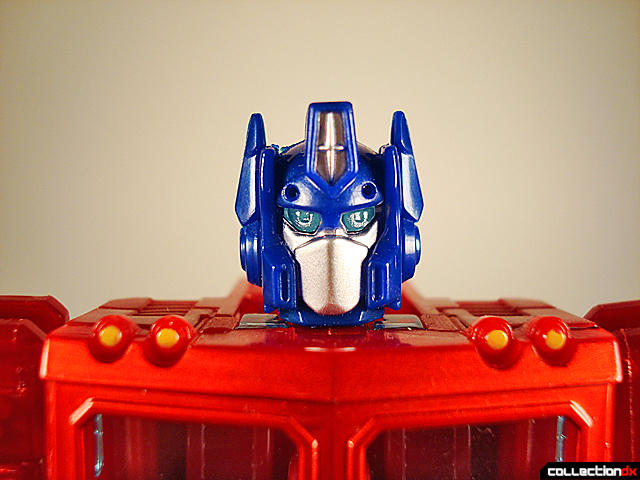 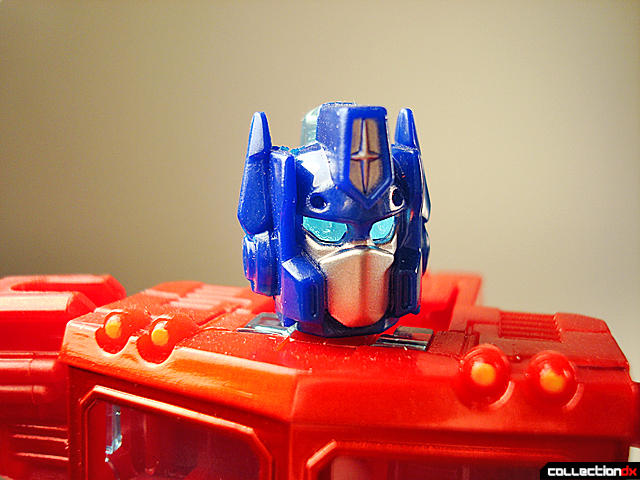 Although the figure isn't completely painted red, it is strategically placed in all the right spots, including his forearms. Strangely, the Autobot logo is on the forearm instead of the shoulder. Looks out of place to me. 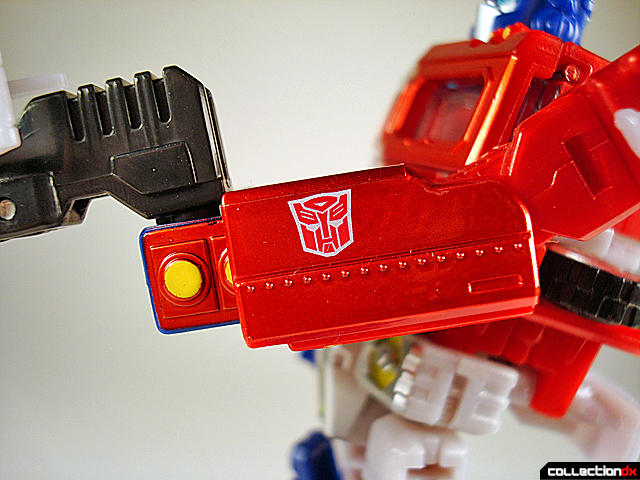 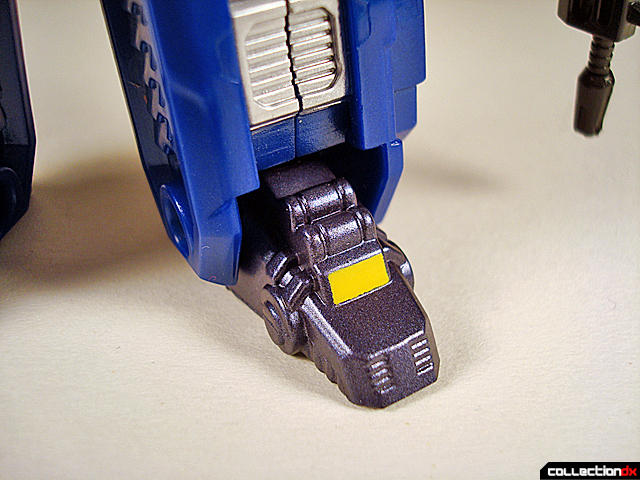 One of the eyesores out back is this black stick. It is used to activate the figure's gimmick. I wish there was a way to hide it somehow. 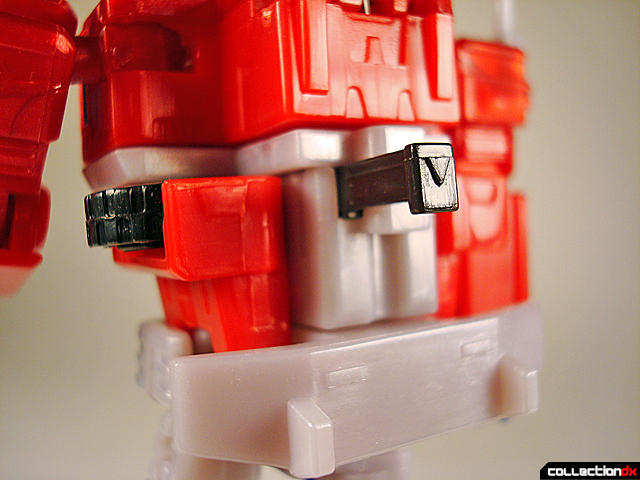 First, push it in until you hear a snap. This will unlock the upper half of his chest. Then just push down repeatedly to get him to do a spin attack. Strangely cool. 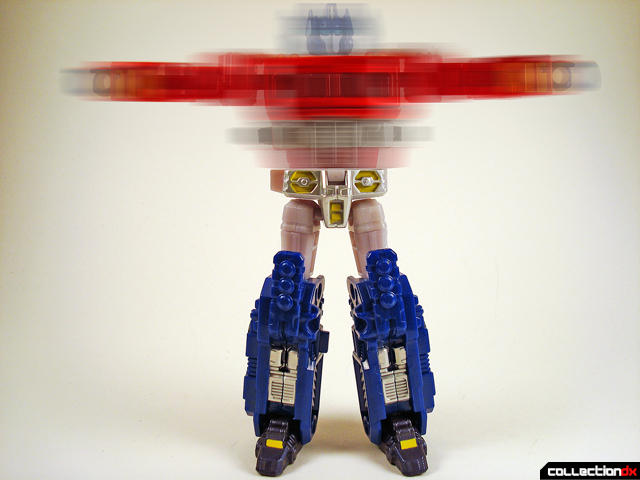 Can G1 Prime do this? I think not. Any robot that can kneel easily is more fun than one that can't. 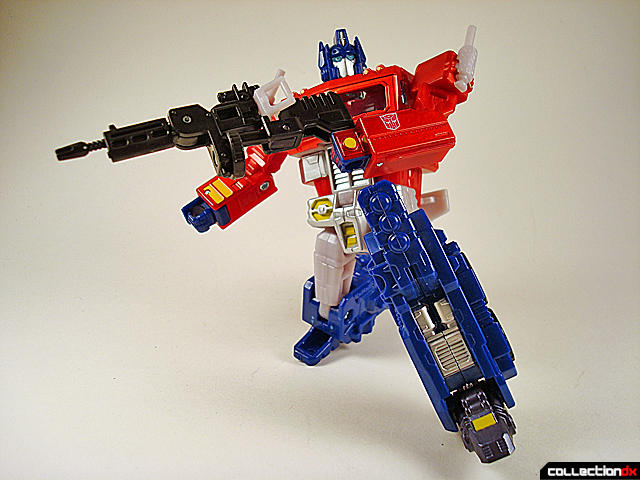 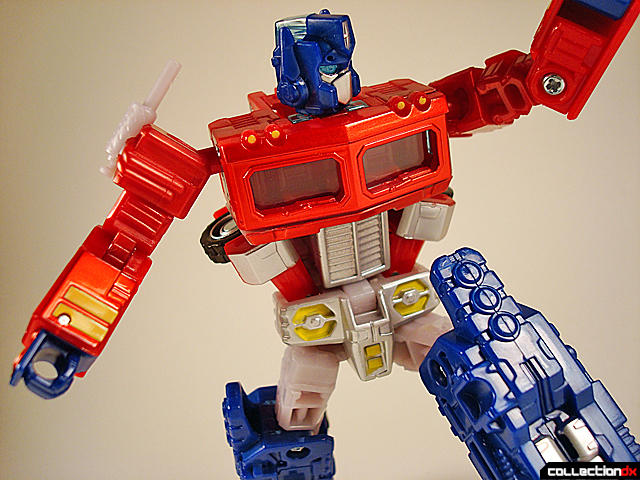 Transformation is pretty straight forward and rather similar to the original G1 Optimus. Once done, you are left with the cab. Sadly no trailer. 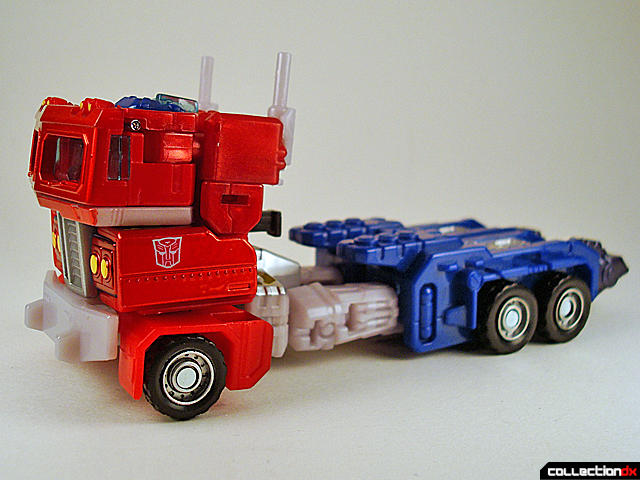 From the front it starts getting a little ugly. Panels don't line up, too many uneven surfaces, but overall OK. I wish there was a more secure transformation for the arms and cab section. 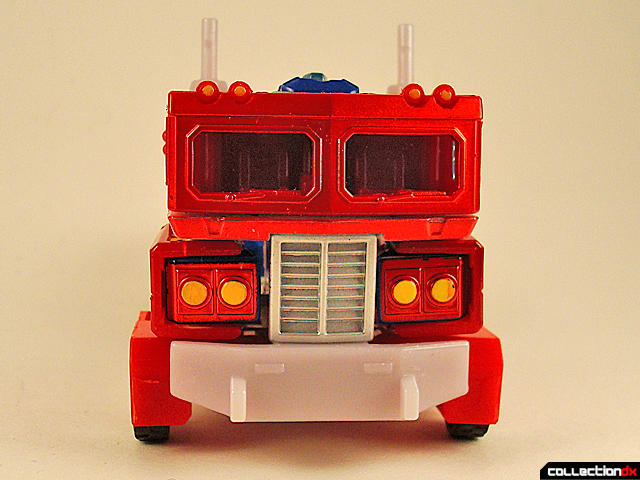 Now, this is just silly. Couldn't they devise a way to hide the head? Seriously? It's there for everyone to see. 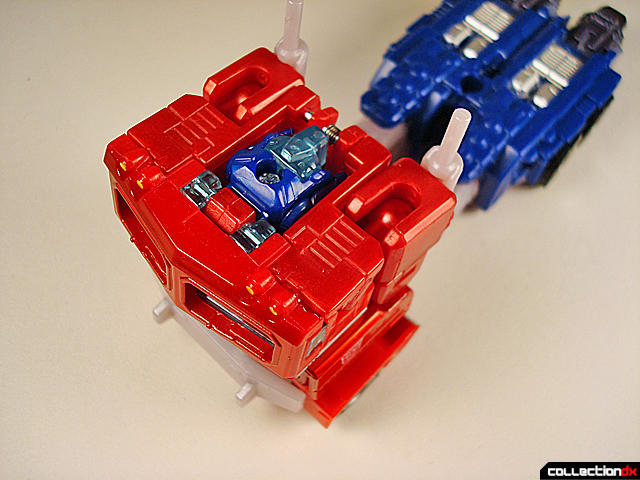 His gun unfolds and can be mounted out back when battle looms near. 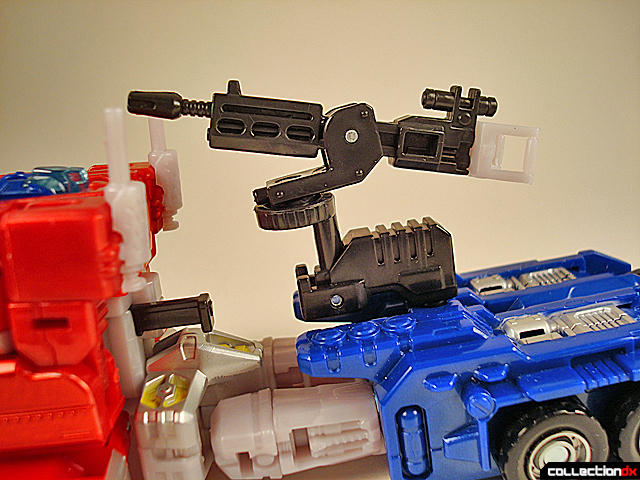 Since no human can man this gun, who can? Legends Hound is willing to lend a helping hand, except he can't reach the handles cause his tire boobs are in the way and he is a bit too tall. Fun times nonetheless. 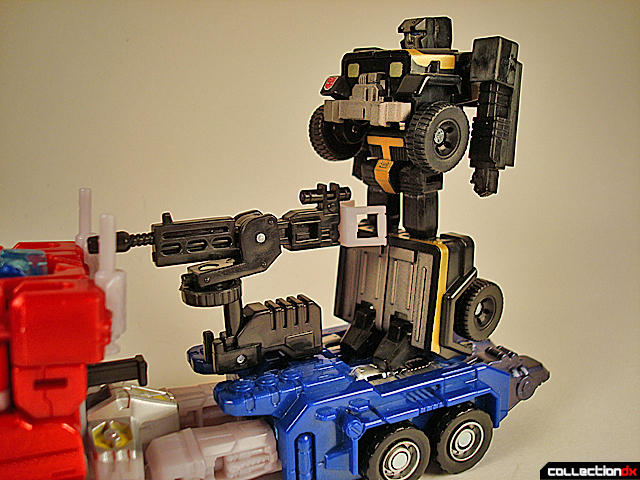 With hound in vehicle mode, you can see that they scale together rather well. 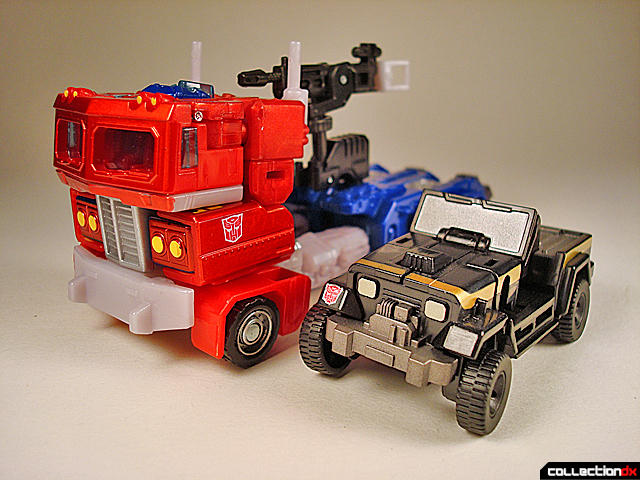 Overall I don't think it necessarily a bad figure, but it should have been better for the price it demands. The paint job is rather cool aside from the different reds used. The gimmick is kind of cheesy and while it's nice that they included a gimmick, the money could have been spent elsewhere on the figure, like making sure panels line up better and avoiding floppy arms. If these things outweigh your desire for a newer release classic style prime, you may not think it's a worthwhile purchase considering the high price tag. I would wait for the inevitable Hasbro release. Size-wise it is rather small compared to other deluxe sized Transformers. Even smaller when compared to Masterpiece Prime. Poor lil' Optimus! 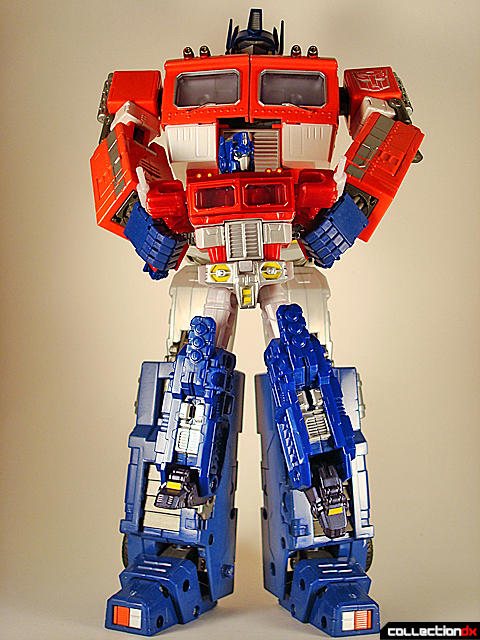 Check out the video!

Wasn't this thing warming the shelves at dollar general for like 5 bucks including Megatron?

That "backpack" thing is actually pretty accurate to certain episodes of the show. There's 2
(IIRC) episodes where Optimus (and maybe other characters?) has a different character model,and he has the backpack.

Hmmm you may be right. I was just thinking that they were trying to work around the spinning mechanism which caused the strange shape, but that darn black button looks so strange.

I have to say, for years I've been waiting for an ideal G1 Optimus, though some models are more detailed than others, i cant find one that really does it for me, and though i would have loved to get a new G1 Optimus instead of my extremely old one I've had since i was a kid, the one that's appealed to me recently is the War for Cyberton Optimus, looks pretty cool in both vehicle and robot mode.

PS: Love that last comparison pic between the two models, the one in the back seems very dark and evil, especially since you cant fully see his face, nice job.

thanks, yeah I pretty happy with the way it came out. It wasnt on purpose beacuse I am using a makeshift setup for photos so I wasnt able to get the look I originally wanted, but the last shot came out nice and evil

Yeah, this guy was fun to play with, but he's a horrible truck. Love the gun, though! I only ended up with 'em because he came in the two pack; I bought that sucker for Megatron!

Wait, isn't this TakaraTomy's repaint of the OP from the Classics toyline G2 Optimus VS Megatron? I heard a lot of negative things about that toy.

If it's the one that Alexx is talking about, probably. I also have this mold in another release that came with a window flap called the SE -01. Doesnt have as many paint apps as this though.

Yup, that's the one I was talkin' about! Much plainer looking than the one reviewed here, but the same mold. The spinny torso always cracked me up, but I don't pay the figure much mind because of the classics version awhile back. Still my favorite Prime.

this thing is gorgeous...
the colors are awesome, but the mold is decent too.
really wanted to see a new prime other than movie prime( don't like it!!)
the Classics one is cool, but this one look more accurate..
this one and War for cybertron are my favorite primes for now....
come on hasbro!! please release this guy.....i'd definitely buy it for 13 bucks...