I continue to watch the margins for toys sneaking out of China’s burgeoning popular culture. While China continues to manufacture toys for the rest of the world, both legitimate and otherwise, unique domestic properties are flourishing.

Ultra Beast Force is a recent Chinese CGI action program. From the looks of the opening, it’s a solid, if derivative, piece of work. The style is heavily indebted to Plex’s Sentai and Kamen Rider designs.

UBF features four prominent mecha, a blue dragon, a red dragon, a purple dragon, and a yellow elephant. A fourth dragon would have been too much. All four combine into a large mech. It all looks pretty sweet in CGI.

But what about the toy? Ehhh...

The 3-in-1 Gattai playset arrives in a huge, inefficient, expensive-to-ship box. All the Chinese toys I’ve bought are clearly intended for domestic distribution only. Whereas Bandai packs everything into the smallest possible box, Auldey could care less how much it costs to ship halfway around the world. It’s a sturdy, colorful box though, easily the match of contemporary American packaging in quality. 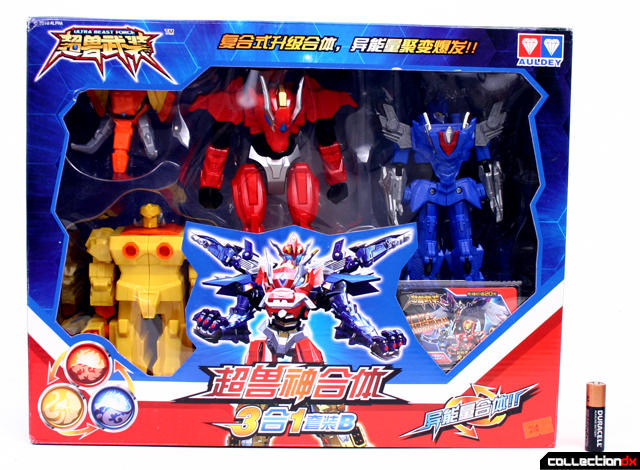 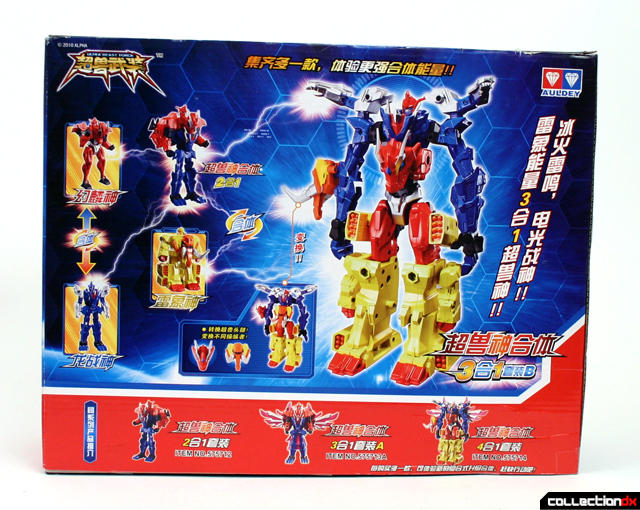 Inside, you see where all of that wasted space went. The set includes three of the four mecha (I gather that the purple dragon is available separately) and no accessories (there’s an adapter for the red dragon head which makes it work with a single port rather than two, and the elephant head is packed separately). 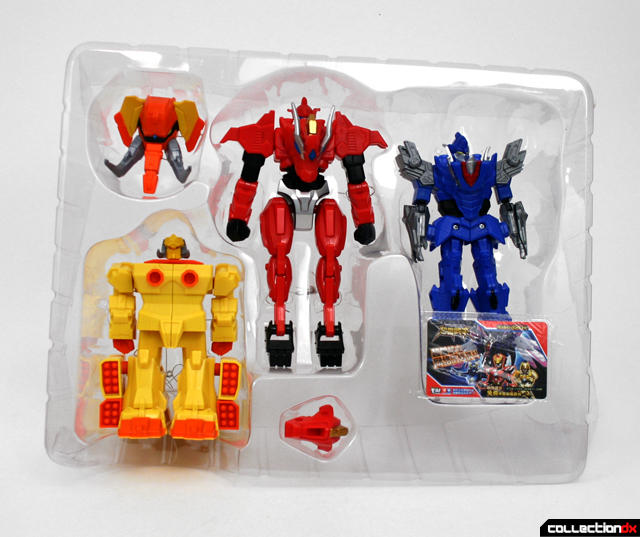 Let’s dig in. First up, the red dragon. I don’t care for the design - anonymous, boring pap. Twelve superior variations on this figure already exist. The detail is minimal, the sculpt uninspired. Its head, in particular, is the sort of doughey, vaguely Gundam-esque sculpt favored by bootleggers for decades. 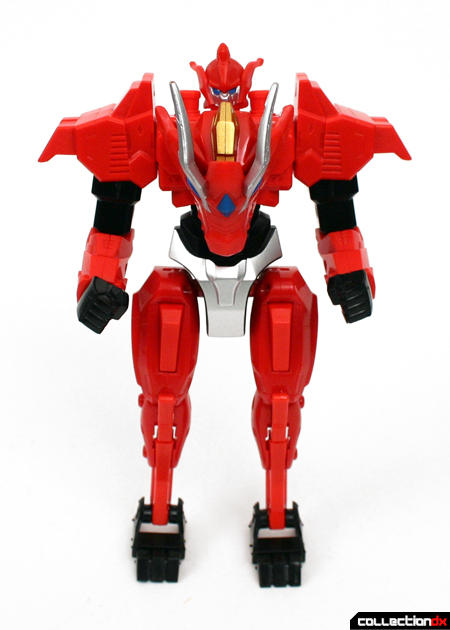 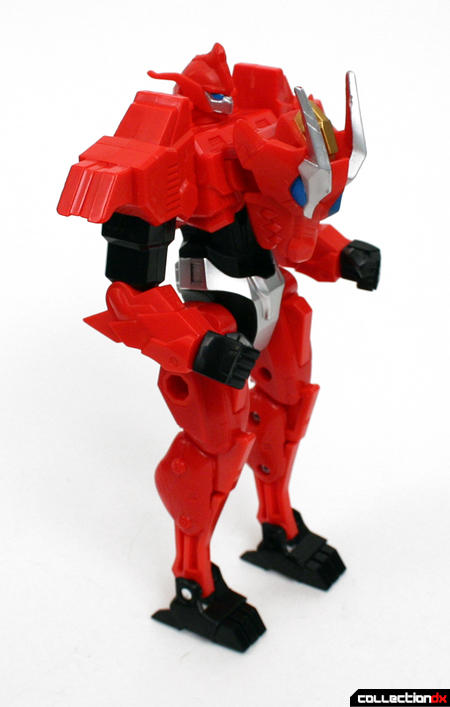 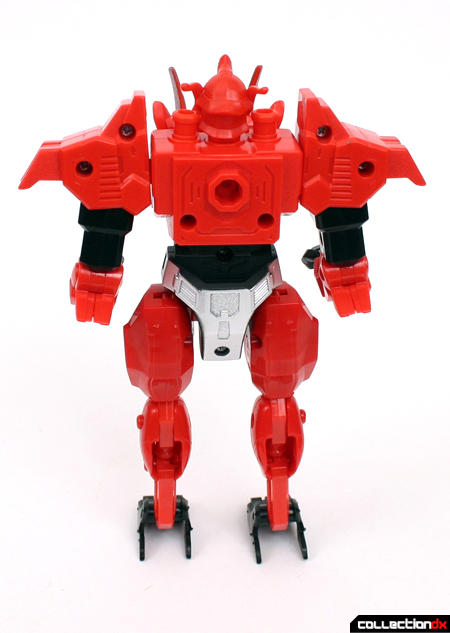 Having said all that, by the standards of Chinese toys it’s perfectly fine. A sturdy, competent plaything.

Articulation is respectable. There’s some life in those legs. Many of the joints are heavily detanted. 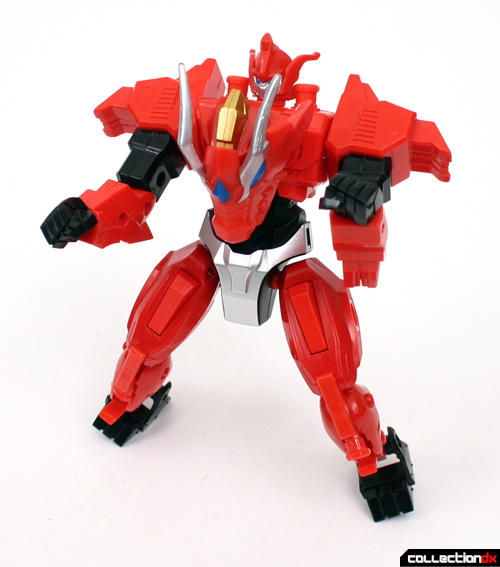 The red dragon is more than capable of truckin'. 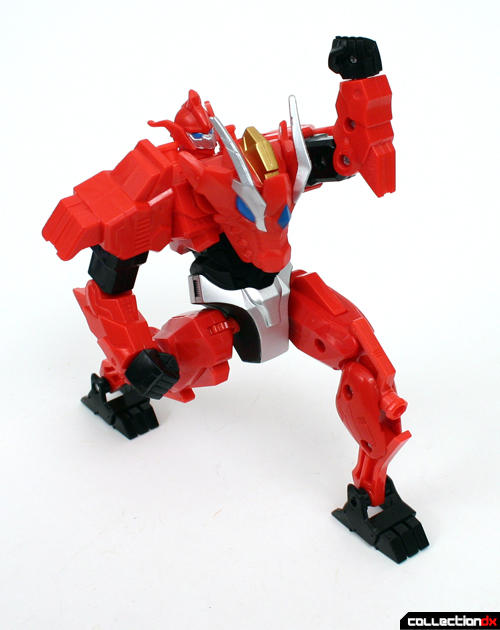 The blue dragon is a little more compelling, but suffers from strange proportions and minimal articulation. As we will see, Chinese Plex is still a little shaky on proportion. 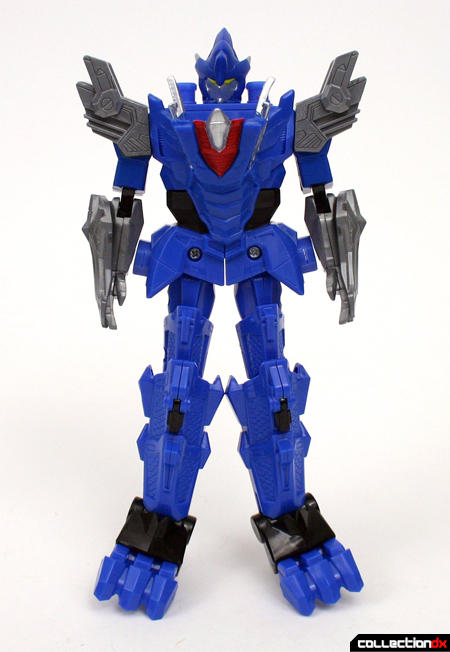 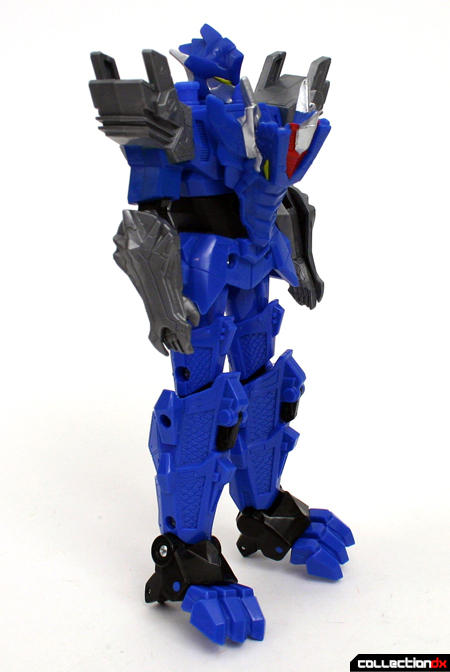 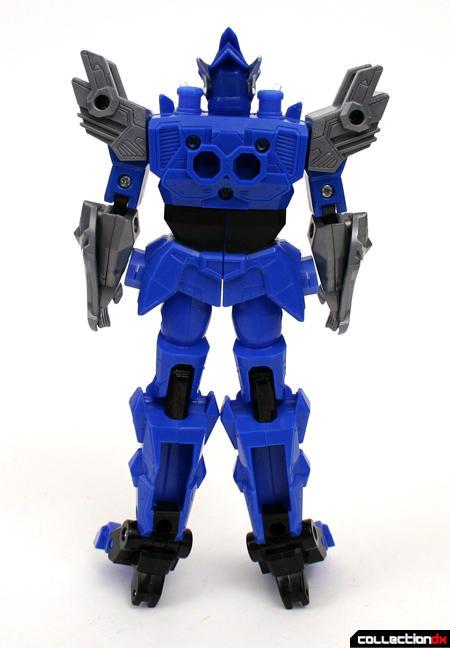 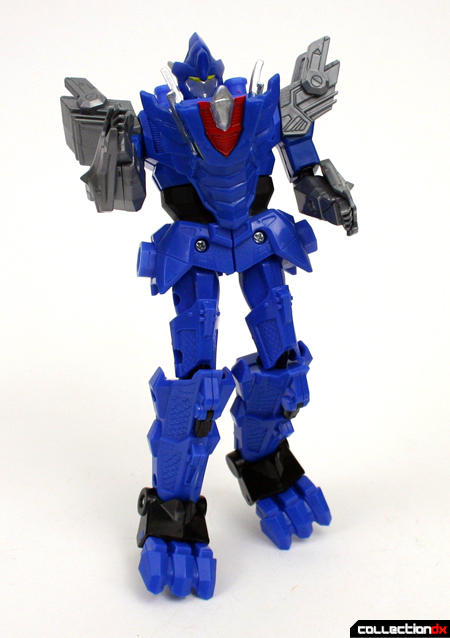 The elephant makes up for the milquetoast dragon bots. The design is relatively fresh, the proportions appealing. I get a Predaking vibe from the colors and blocky sculpt. 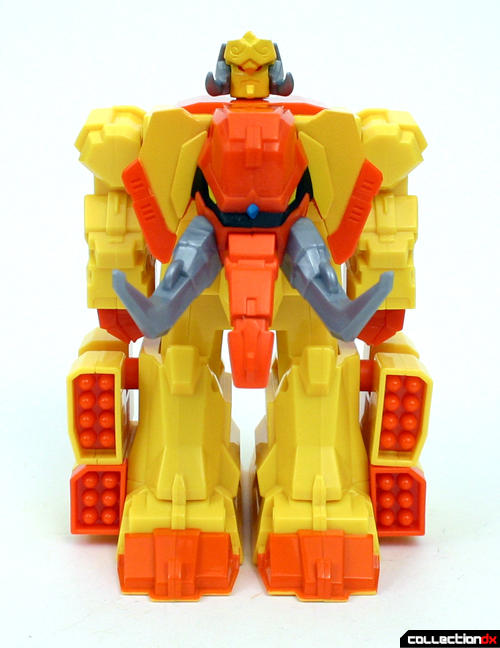 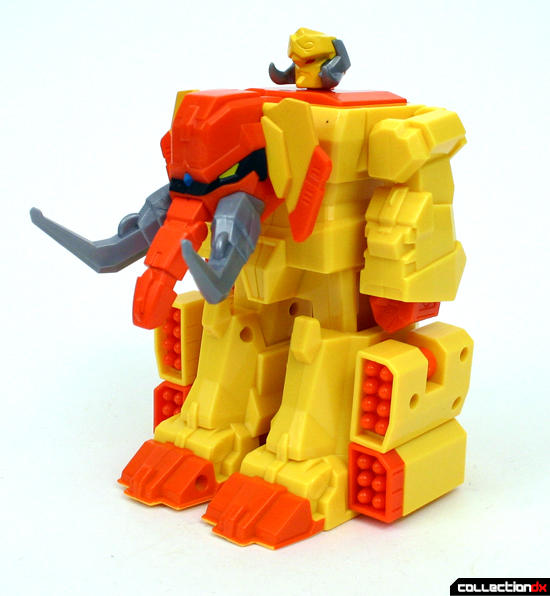 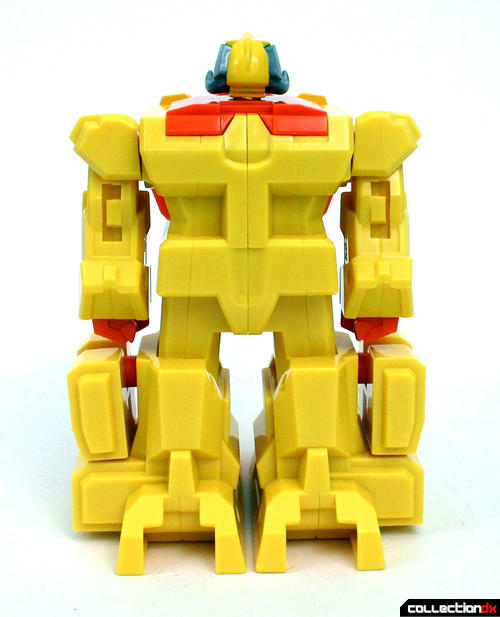 Articulation is limited to the arms and neck. 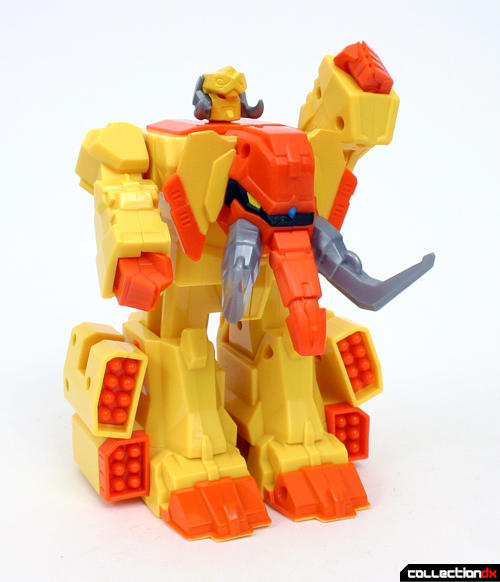 The base figures aren’t the draw here, though. Auldey released proper transforming versions of all these characters, but this set is about the Gattai.

All of the figures are constructed with modular limbs and torsos using hexagonal joints similar to modern Sentai connectors. The two dragons combine with a little dis-assembly and rearranging. 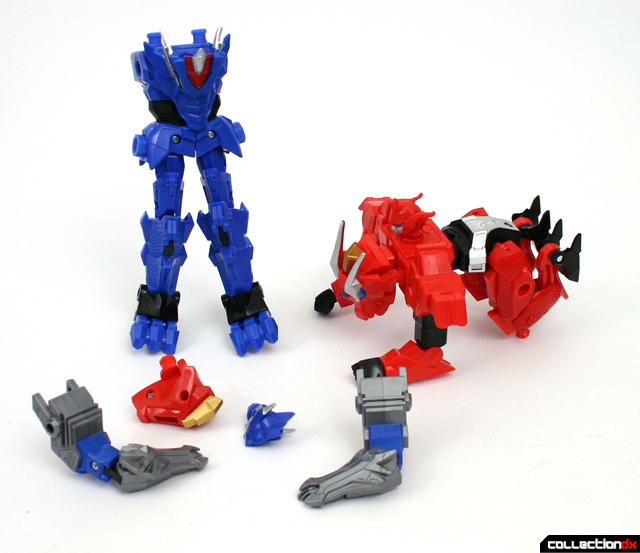 The resulting form is just adequate. The torso is too long. 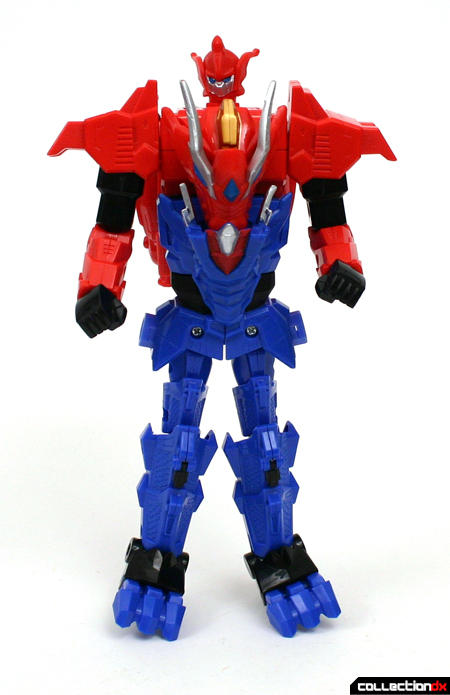 And what looks okay from the front is just a disaster from the side. Yeah, the whole bottom half of the red bot just kind of hangs off the back. I do like how the dragon heads nest. 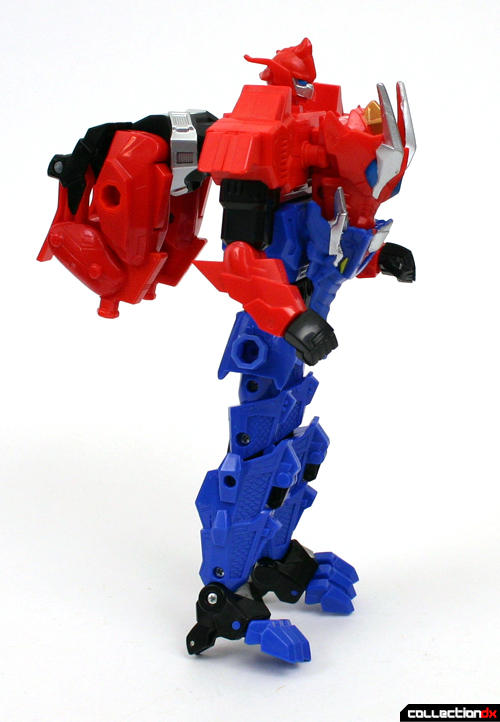 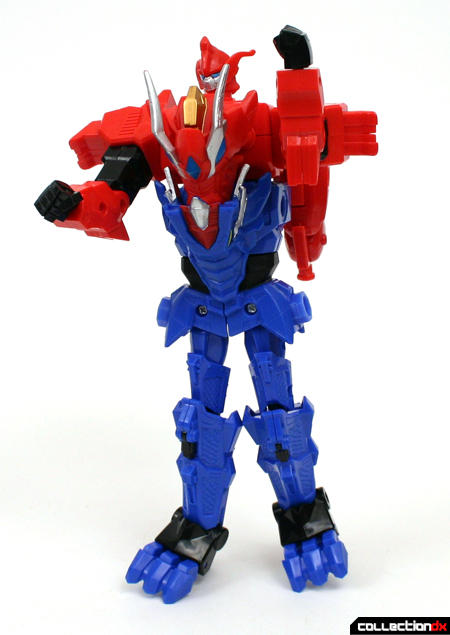 With more extensive dis-assembly and rearranging, the whole set comes together in it’s ultimate configuration. 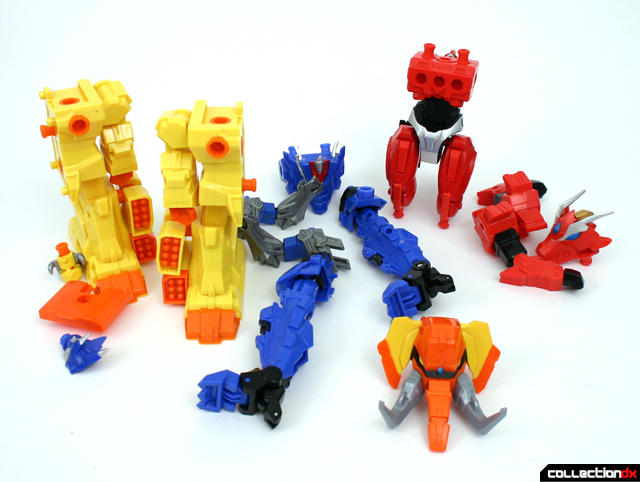 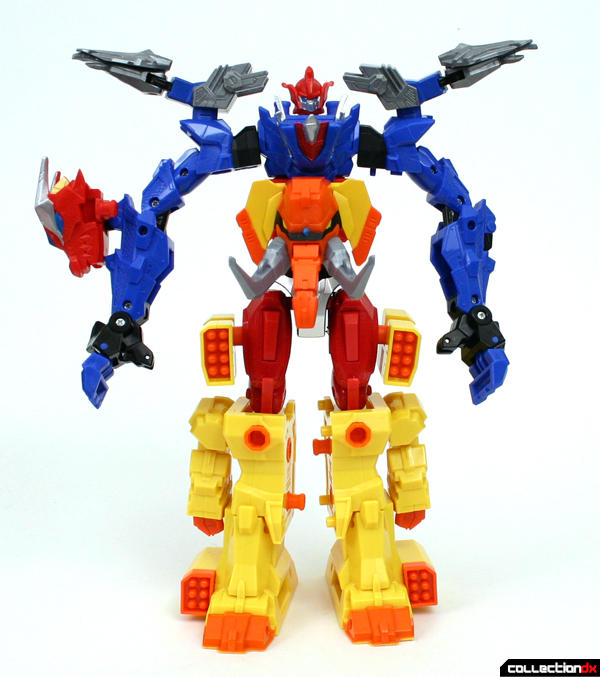 Wow. Again, proportions are questionable at best. But the ballsy outlandishness is arresting. I can’t help but like this ungainly monster. Every individual component is awkward, but the combination of it all somehow works for me. 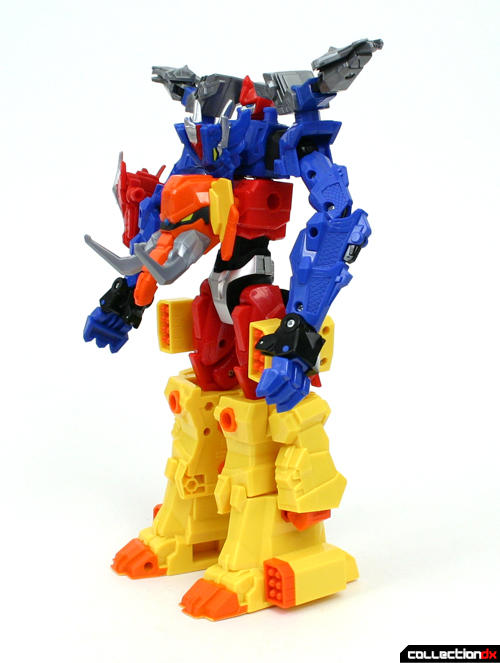 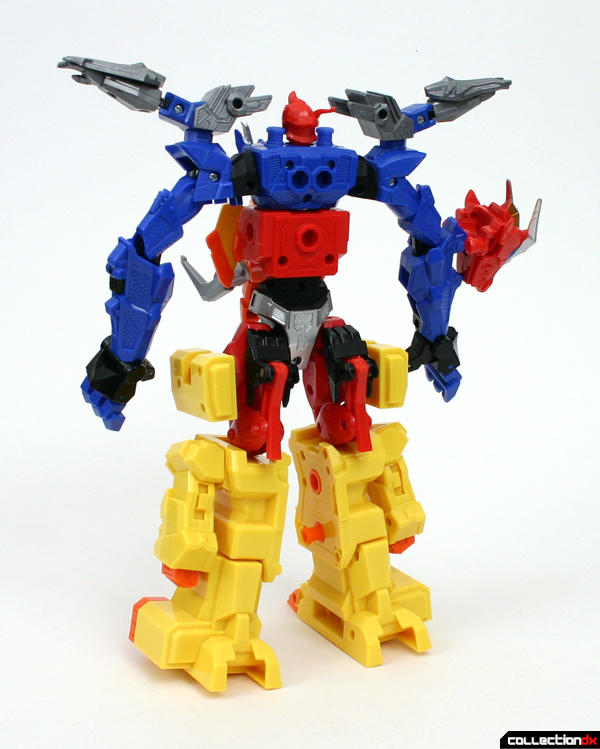 The final form is mostly a brick. Any attempts to pose look like ‘robot’ break-dancing. 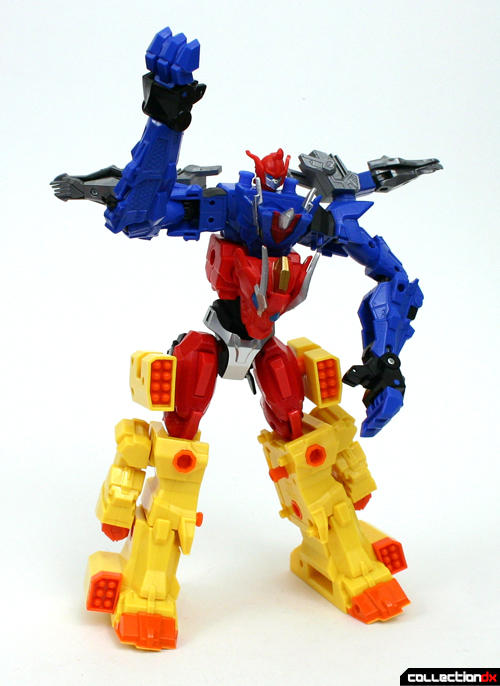 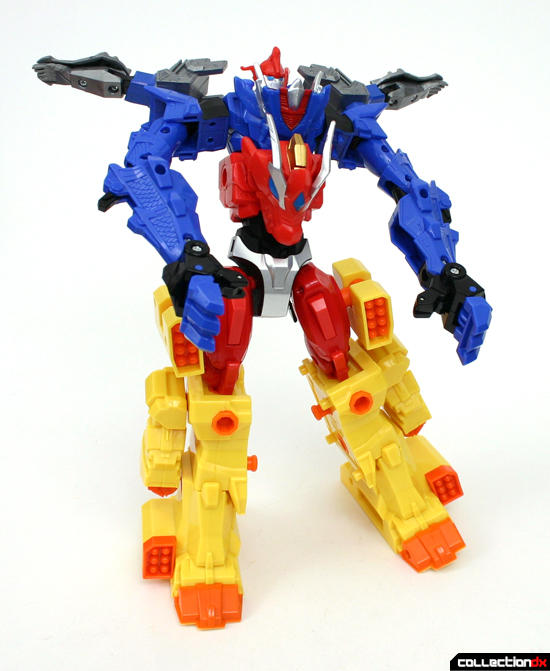 You can switch the heads at the arm and chest. 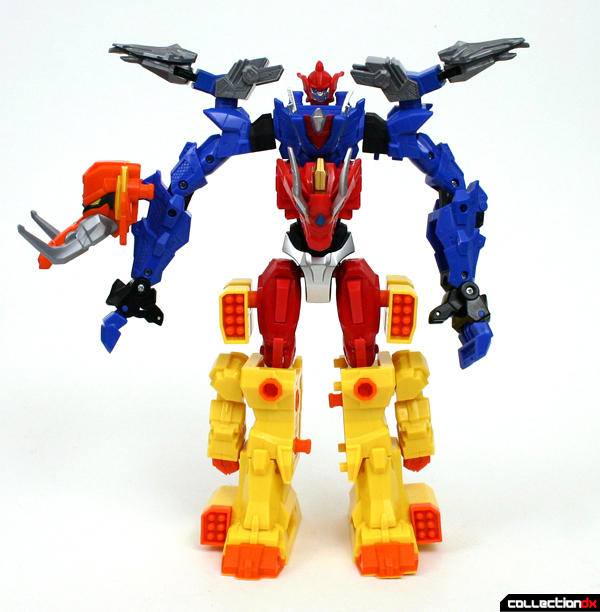 I’m conflicted by this toy. The set is pretty middling in almost every respect, but the alchemy of the Gattai elevates it to something more. Just more promising evidence of the stirring imagination of Chinese toymakers. 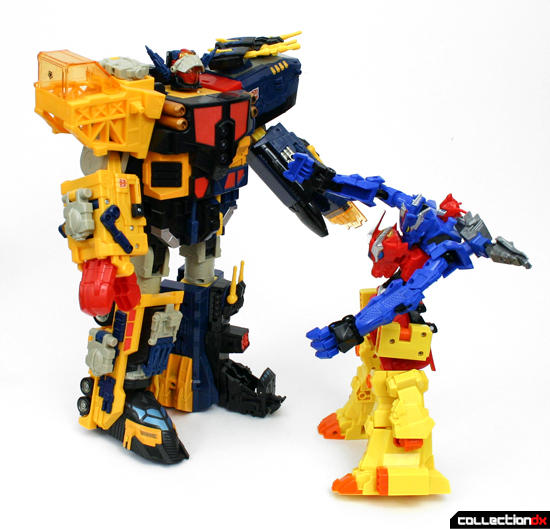 4 comments posted
That's actually not half the

That's actually not half the bad. The show that is.

Are the pegs and ports compatible with Bandai's Joint Gattai series of toys? Those would make some interesting combinations.

it's oddly proportioned.. but I can see the fun factorin it. I'm surprised at the show's animation.. the quality is suprisigingly good.