In the world of military aircraft, attack planes are the ground pounders that bring powerful weaponry to bear against targets with far more precision than a large bomber. In the Muv-Luv universe where many famous airplanes have been re-imagined as sweet robots, a little extra work had to be done to differentiate a Tactical Surface Attacker from a Tactical Surface Fighter. On the battlefield a TSA is tasked with blitzing the fringes of an enemy stronghold and establishing a landing zone for the main force to arrive on. With the navies of Muv-Luv possessing both the F-14 Tomcat and F-18 Hornet, it was only natural that they would also have a robotic version of the venerable A-6 Intruder. 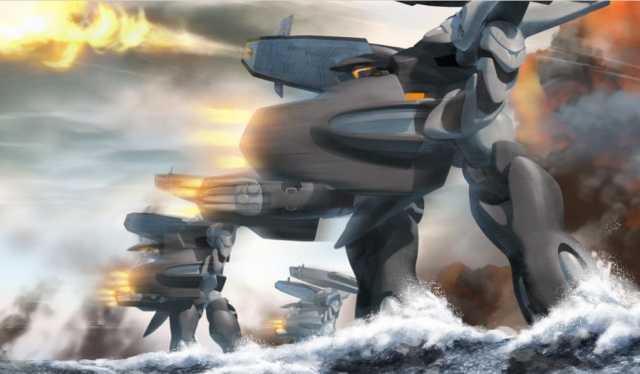 A team of A-6 Intruders storm the beaches of Sadogashima with guns blazing.

The Muv-Luv version of the airplane that would carry Willem Dafoe to his final mission was the first TSA deployed to help combat the onslaught of BETA aliens. Rather than being optimized for aerial maneuverability, the A-6 Intruder is built for amphibious operations and is capable of transforming into a submersible vehicle. An A-6 normally travels to the battlefield affixed to the front of a small submarine. Once it arrives on the scene it detaches and floats to the surface so it can land on the shoreline and secure the area. The Japanese Imperial Army uses their own localized variant of the Intruder which they call the Type-81 / A-6J Wadatsumi (god of the sea). The A-6J appeared briefly in Muv-Luv Alternative and has also shown up in various side stories. 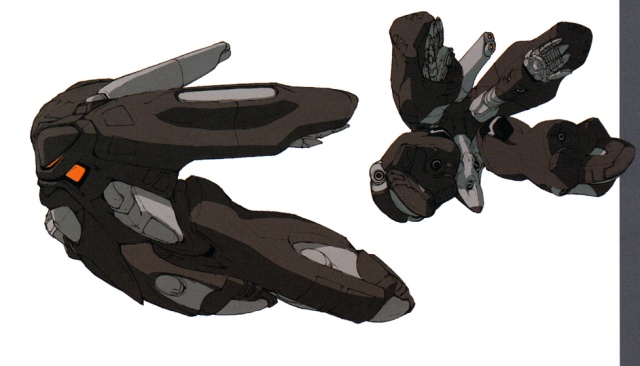 A-6 Intruder in its alternate mode.

Those reading SpaceRunaway's reviews of the Full Action Figure Series know that Volks is right at home at producing strange and obscure robot toys for a small market. The Volks figure of the Type-81 / A-6J Wadatsumi is an offshoot of their regular A3 and TMC lines that was sold as a "campaign item." 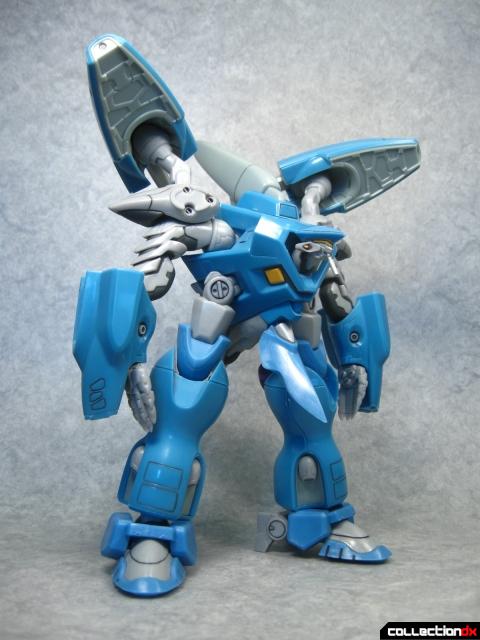 The Volks Wadatsumi is a large fixed-pose figure that stands roughly 7.5 inches tall. It's constructed from a mixture of hollow ABS plastic parts with some solid PVC pieces. 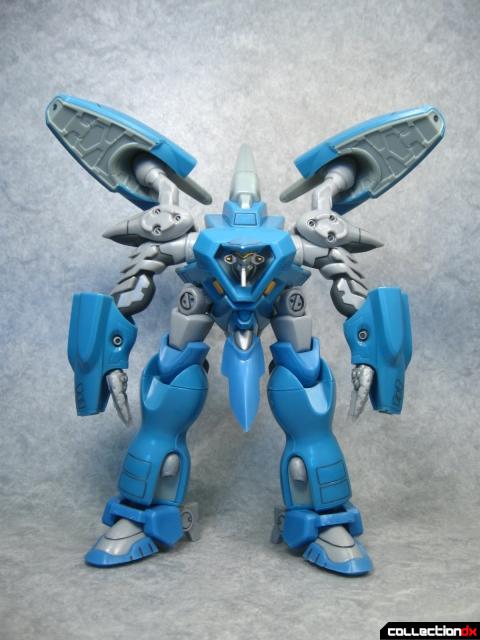 Being nearly as wide as it is tall, the Wadatsumi has a lot of presence 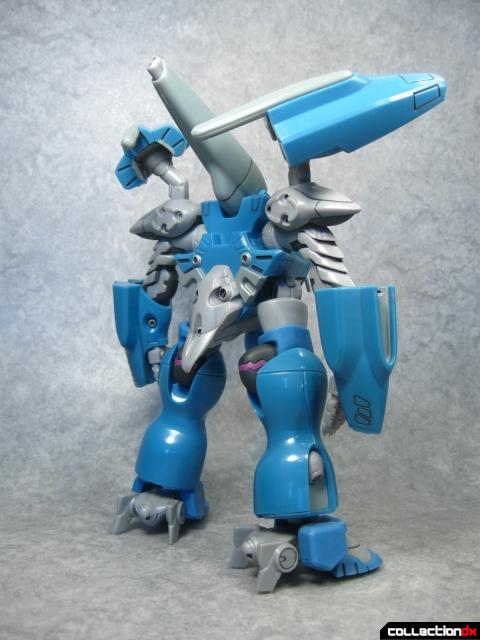 While it has zero points of articulation, the figure is sculpted as the A-6 was designed so it still looks like a functional giant robot. 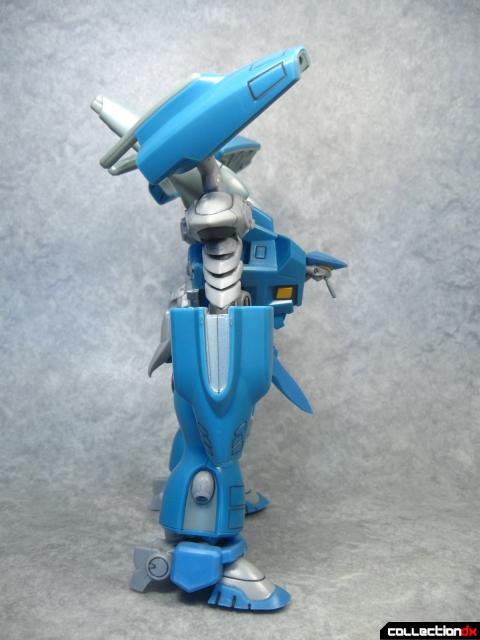 Despite how different it appears, the Wadatsumi still has the earmarks of a Muv-Luv mecha such as the pointy codpiece that appears to serve no purpose on this particular machine. 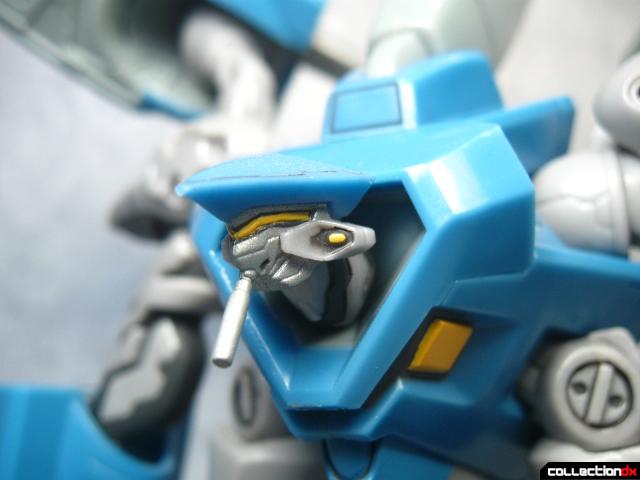 The head especially is unmistakably Muv-Luv with its narrow visor and pointed facial features. Its long cylindrical chin is sharply defined and most definitely something you should never ever touch unless you want to suddenly feel sad and/or upset. 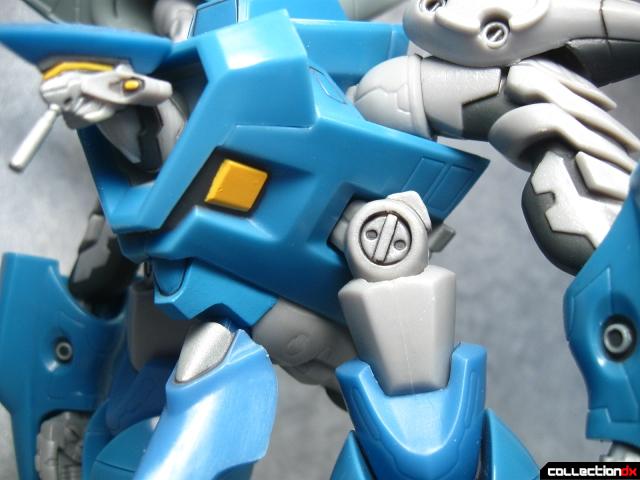 Detailing on the figure is mostly good. 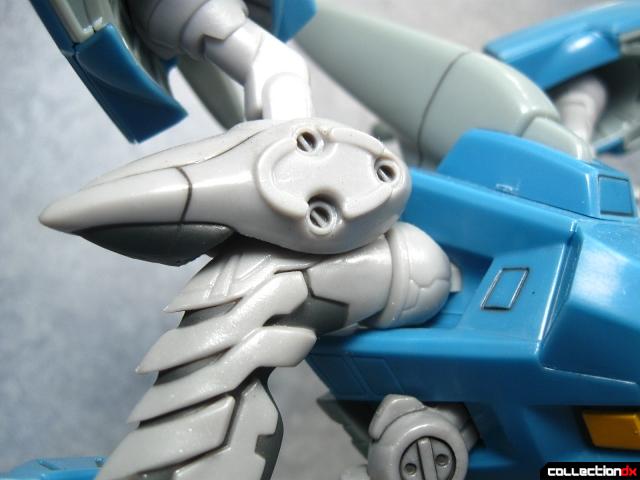 Everything that needs to be highlighted is picked out with paint and the surface has a pleasant if somewhat waxy shine. Most of the large gray pieces are molded in solid PVC plastic that has a similar feel to Volks's TMC figures. This type of PVC is not soft and pliable but rather hard and thick like colored resin. 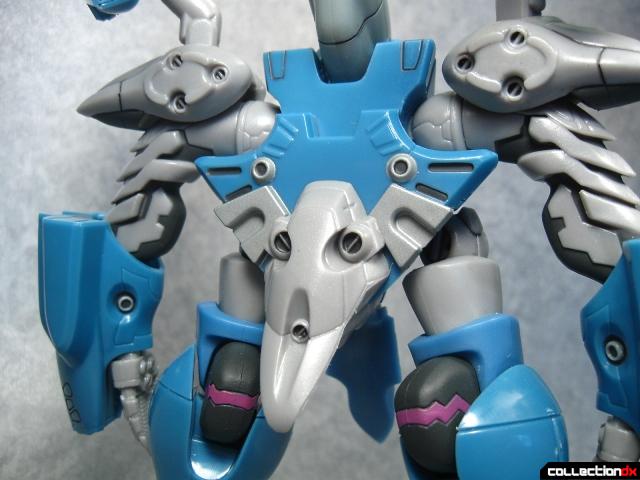 The backside especially has an interesting design consisting of tiny underwater thrusters and what I presume are brackets where a Wadatsumi attaches to its submarine partner. 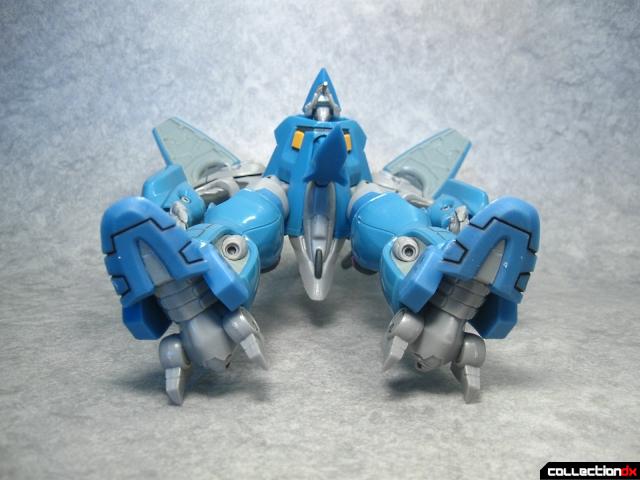 As an amphibious craft, the Wadatsumi has little rudders for heels. 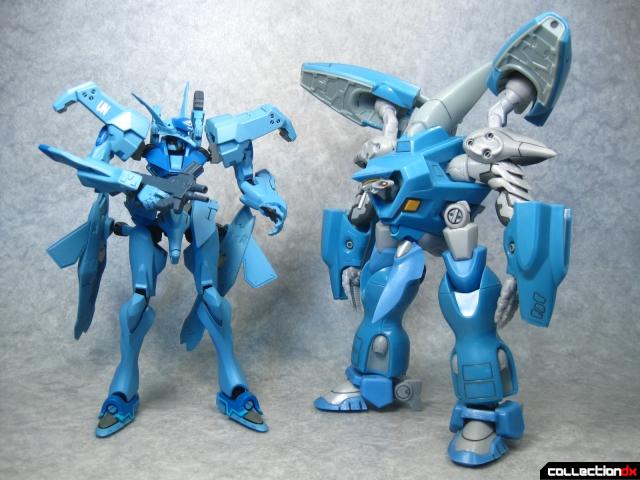 The Wadatsumi is not a part of either the A3 or TMC lines but rather serves as a companion piece to Volks's other Muv-Luv action figures which makes it similar to a Figuarts ZERO. Its blue color scheme denotes that this machine is a part of the United Nation army. According to the official stats, a Type-94 Shiranui is about 18 meters tall while an A-6 is 25 meters tall which means these two toys aren't quite in scale as the Wadatsumi should be visibly taller. All the Volks toys are said to be "non-scale" so it's a moot point. 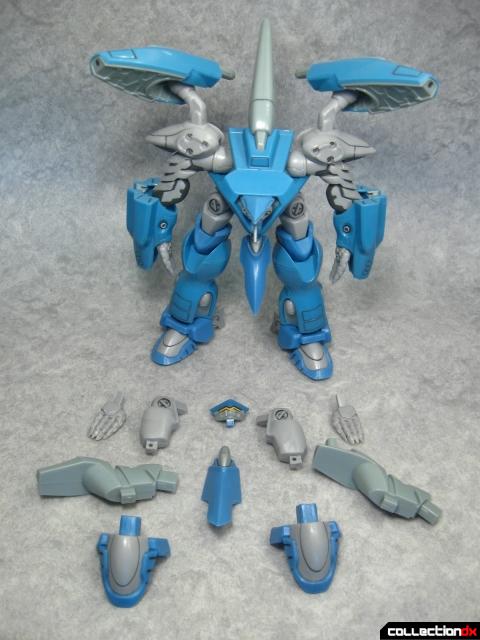 This figure's only accessories is a set of alternate parts that allow you to reconfigure it into its submersible mode. These are all specific parts of the Wadatsumi that have been "transformed" and need to be swapped out with bits that are pre-installed on the figure. 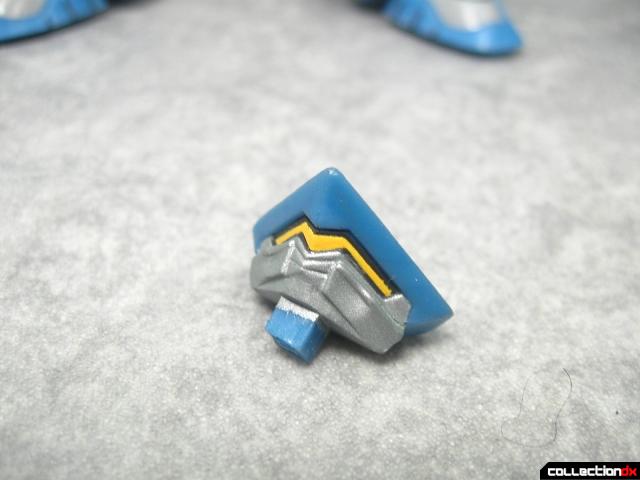 The alternate head is particularly curious because it still has a fair bit of detail underneath the triangular "cap" that is covered up once it is inserted into the main body. 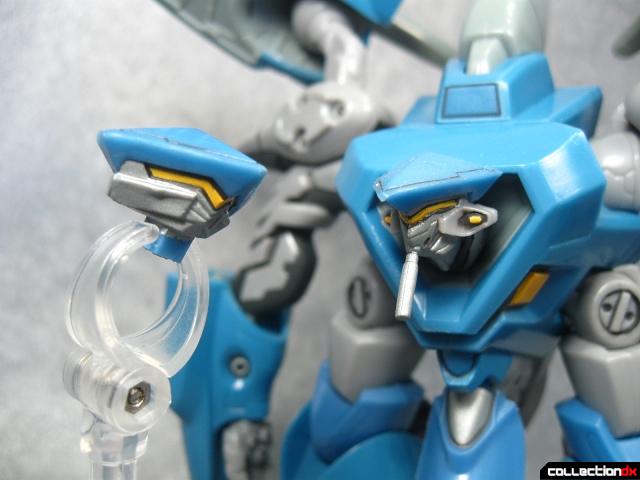 The other head looks quite strange next to the normal one with its extra wide face and squashed details. The amount of fudging between these two heads is kind of comical considering how simple the the transformation is. 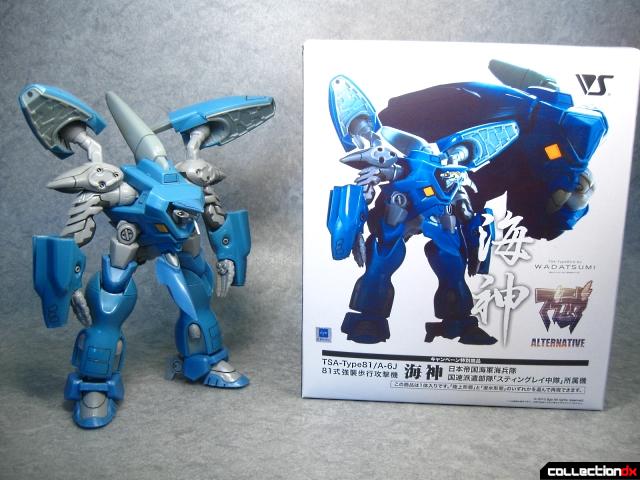 Before we take a look at the transformation, let's check of the toy's box. It's a big ol' square that is only slightly bigger than the figure it houses. On the front is a nice picture of the Wadatsumi in both robot and submersible mode. The Wadatsumi sits securely inside a large plastic tray. 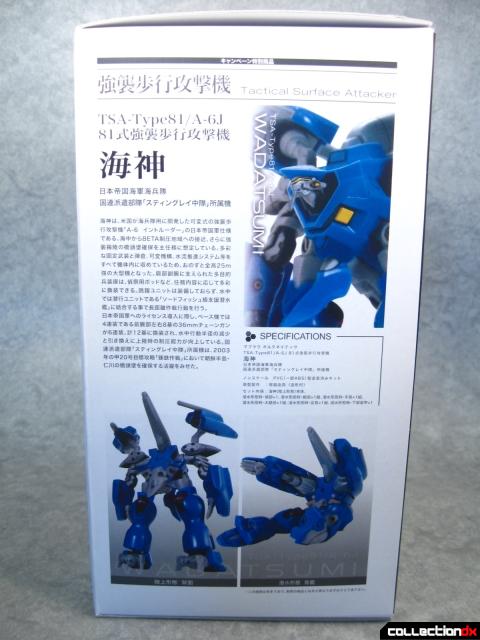 The sides of the box give you some information about the Type-81 / A-6J Wadatsumi as well as a basic overview of the figure you're buying. 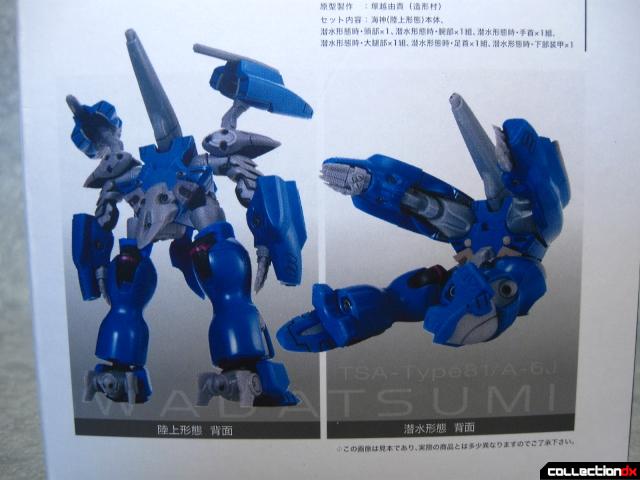 Down on the bottom are rear views of the toy in both modes. 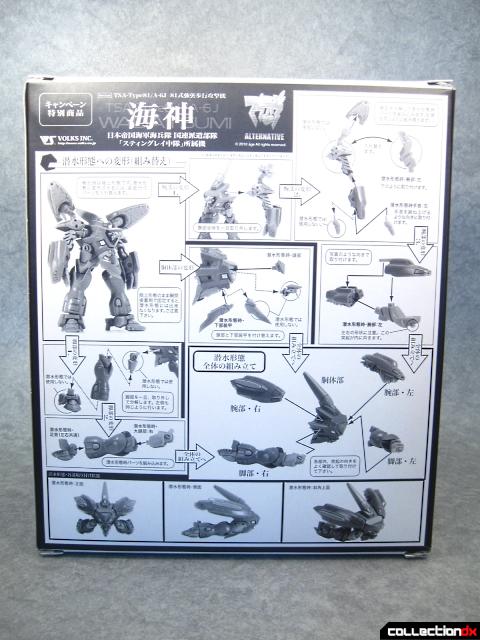 The back of the box has instructions on how to convert the Wadatsumi from one mode to the other. It's a pretty basic affair that involves pulling everything apart and swapping out certain parts with "transformed" versions. As a company, Volks had barely mastered the art of making articulated action figures so making a toy that featured perfect transformation was a little out of their league. 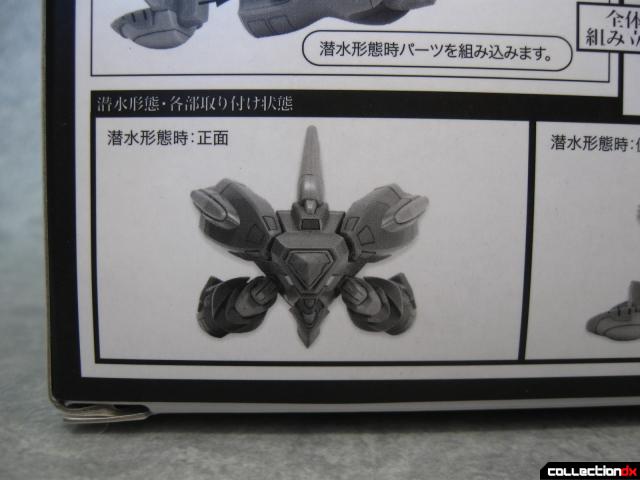 Still they do give you some nice pictures of the Wadatsumi in its other mode. 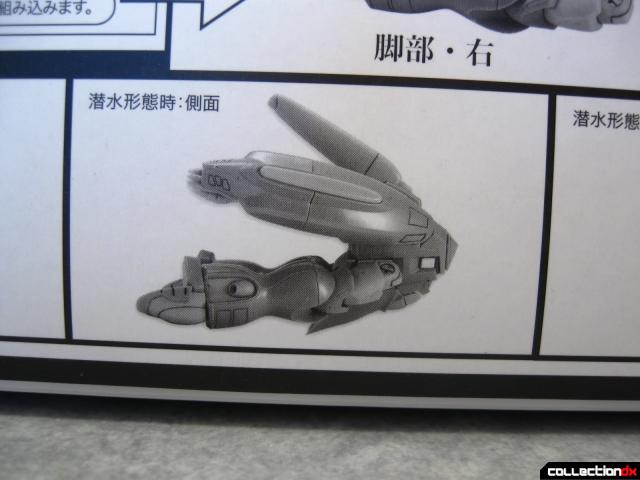 It's basically the front of a submarine. Nothing too flashy or dramatic. 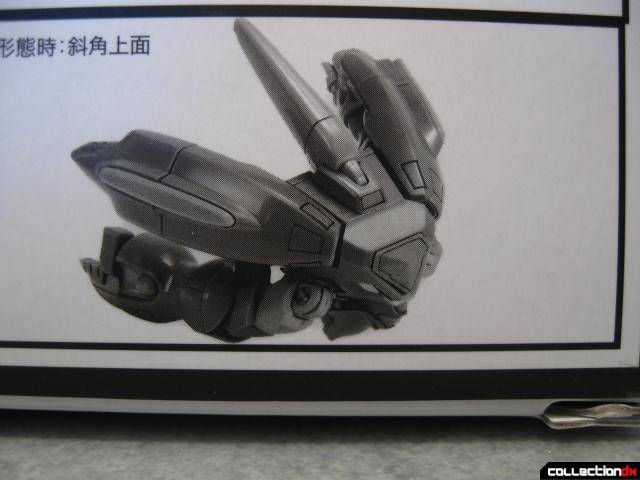 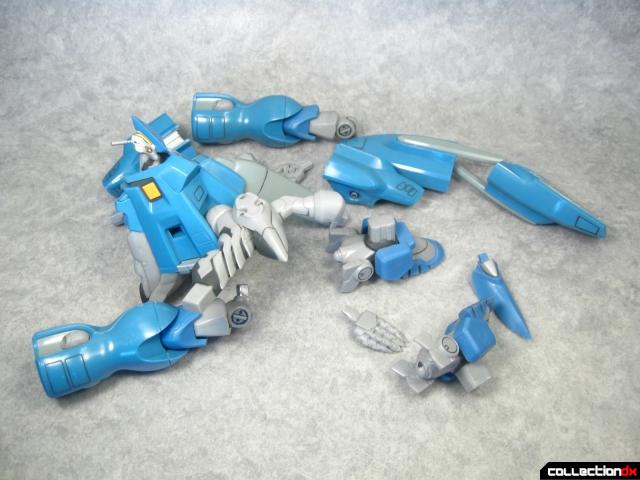 The reason I'm showing you all this is because for the life of me I cannot get my Wadatsumi to fully disassemble. The arms and head are stuck solid in the main body and the upper thighs remain locked into the legs. Everything else comes apart okay but upon closer examination of the ends of the PVC bits reveals they have some really rough molding that makes it hard to peg and unpeg the parts from one another. I think I may have finally been struck by Volks and their spotty quality control. None of my other Muv-Luv figures have had an issue as perplexing as this but it was bound to happen at some point.

Honestly, I'm not really mad as I am disappointed. I bought this figure from Mandarake alongside the Type-97 Fubuki with OTH Cannon and ended up being really pleased with the latter. The Wadatsumi originally cost 6,000 yen but I was able to buy it for 3,000 yen (oddly enough the Fubuki was 1,500...) and for that price I am mostly satisfied with it. It's a good looking fixed-pose figure of an obscure design from Muv-Luv that stands out on my shelf and helps break up the (awesome) monotony of my Tactical Surface Fighter toys. I have certainly seen enough Japanese photo reviews to know that this figure can transform, but I just wish I could have better documented it here. These figures pop up here and there on Japanese stores and at around 3,000 yen I would say the Type-81 / A-6J Wadatsumi is an interesting curiosity for fans of the series regardless of whether it can utilize its singular gimmick. Definitely buy these with a bit of caution if you're expecting the transformation to work.

Recently, my interest in the figure was rekindled as I found its ultimate purpose is not as a weapon... but as a friend. 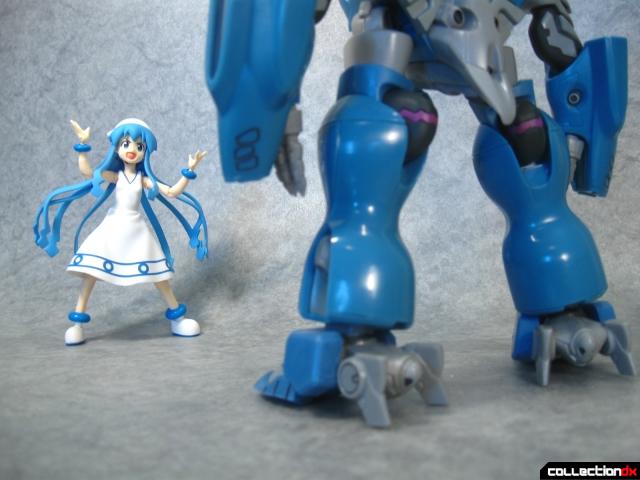 "Hey there fellow sea dweller degeso! Do you want to help me conquer the surface world?" 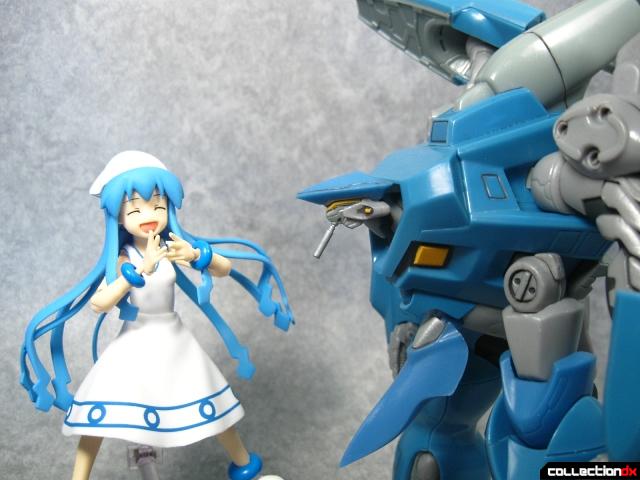 "Why sure! I'm easy like Sunday morning, little lady." 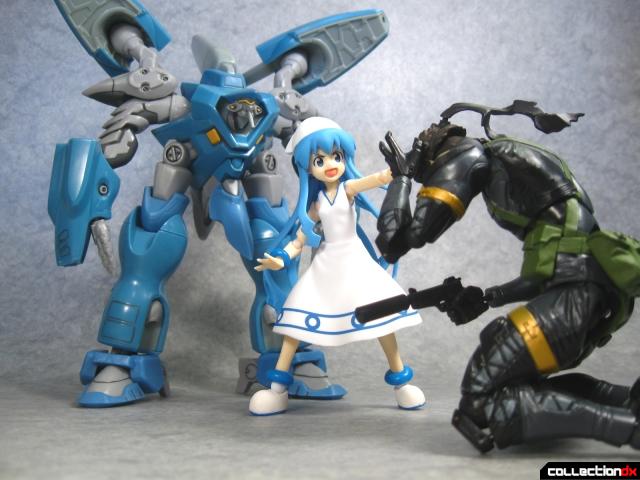 "Our first objective is that eyesore of the seas: OUTER HEAVEN degeso!" 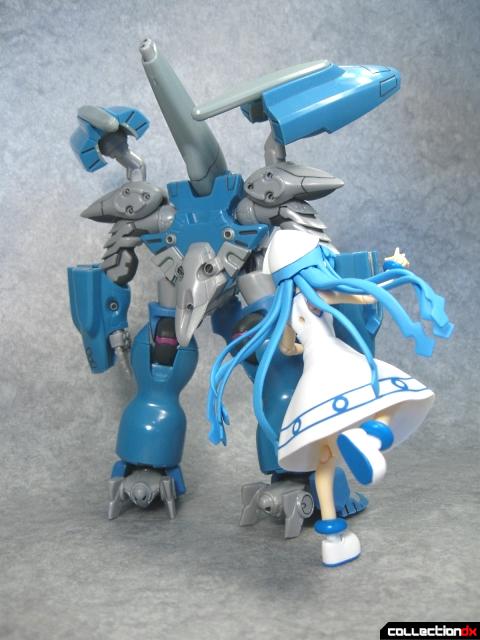 And thus a squidtastic friendship was born as mankind was besieged by a threat far greater than even the BETA...

Wow, I really love this design. Too bad it's fixed pose. Funny how I don't care for the other Muv-Luv designs, but this one hits me.

Well he is a big chunk of luv.

This is still, I think, my favorite design from Muv-Luv and seeing this for the first time marked the point at which I perked up my ears and thought, "Muv-Luv, eh?"
I'm still kind of crushed from learning that it was fixed pose. It's such a great design that can go toe to toe with the best amphibious mecha, it really deserves better. At least it's a piece that can make the other toys around it shine, and sometimes that's enough.