There have been several iterations of the movie version of Starscream since the first Transformers film arrived a few years ago, but none of them seemed to really do the character justice, coming in too small (out of scale to other Transformers of his ‘film’ size) and generally not quite looking like his onscreen counterpart. Well, apparently Hasbro felt the same way because this summer they have graced us with a stunning Leader-class version of the character. 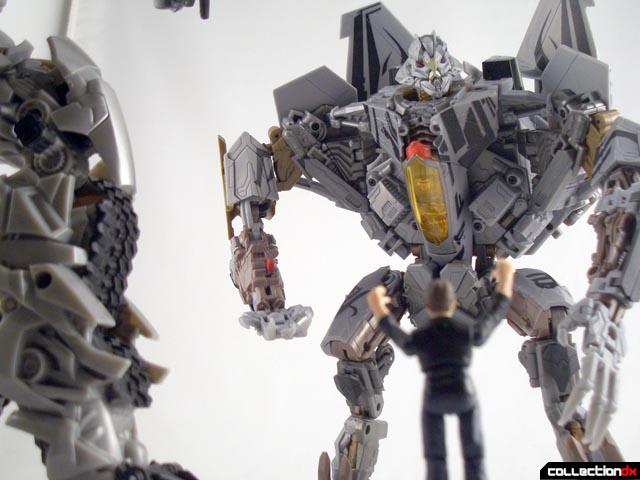 Like the previously released Transformers: Revenge of the Fallen Leader-Class figures, Starscream comes in a shaped window box. I wonder why they go thru the trouble to create these odd shaped boxes. I know it adds to the final cost of the product on the shelves, and in this economy you would think they would be out to shave a couple bucks off an already pricy domestic toy. 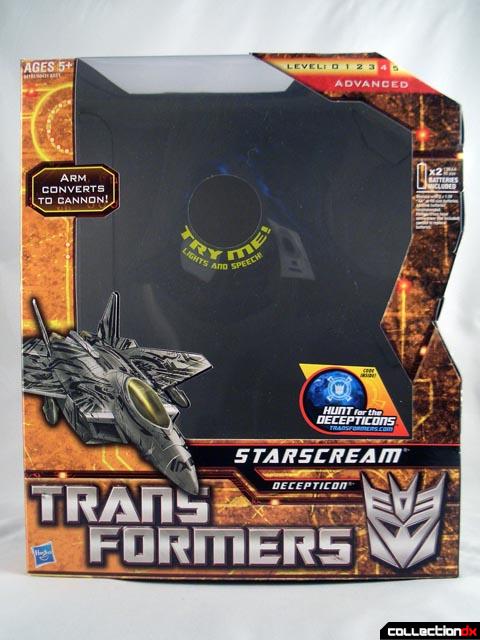 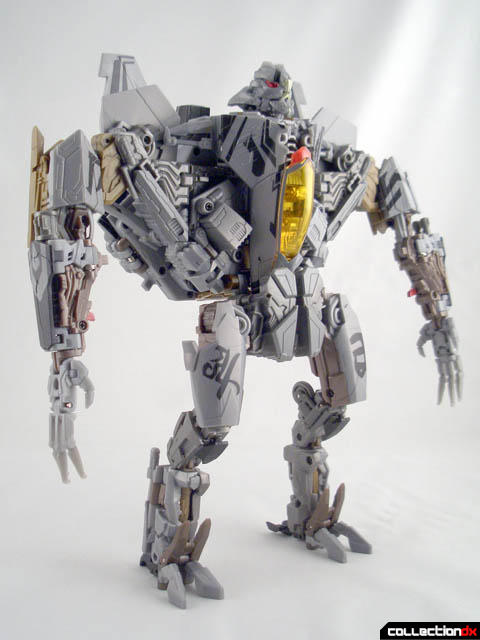 Starscream ships in robot mode and boy does it look good even before you get it out of the package. 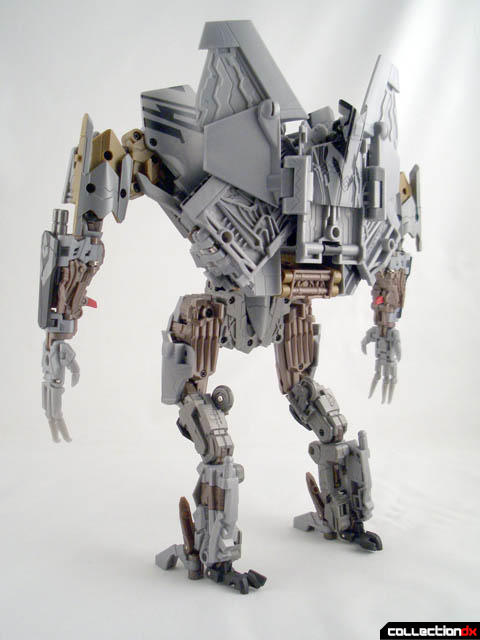 Once out of the package the first thing noticed is that the sculpted detail is very generous. This is something I've noticed Hasbro has gotten much better with over the years, upping the ante on the level of detail these mass produced toys can have just in the mold alone. 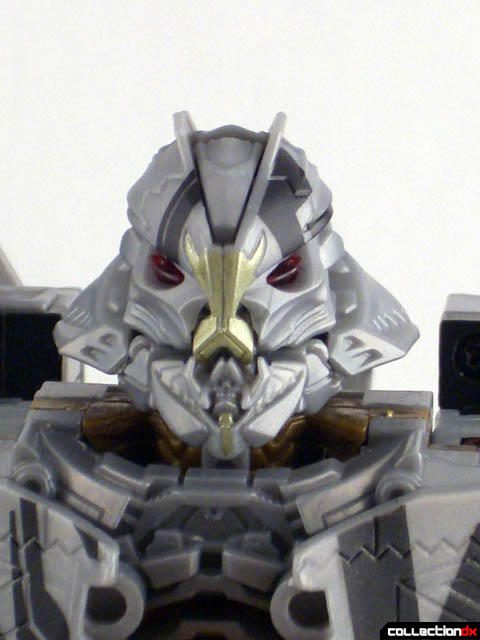 Paint application is neat and clean and there are no problems with sloppy details or smudging paint on this release. While the painted detail is good, there is not a lot of variety to it. 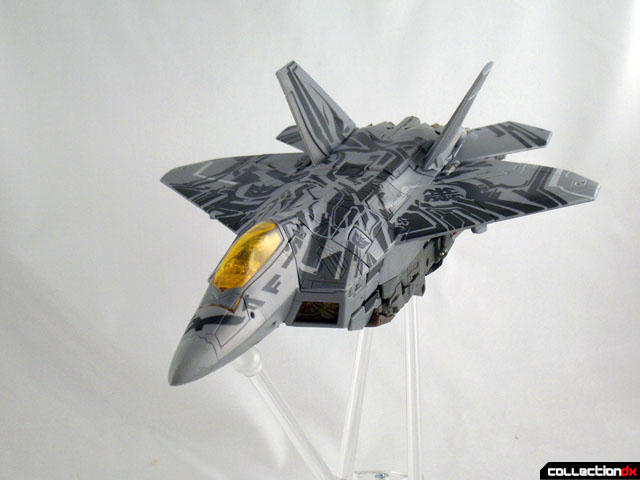 Tampo printed Cybertronian tattoos cover Starscream in black, with just a sparing amount of gold and red added to select parts to bring out some details. 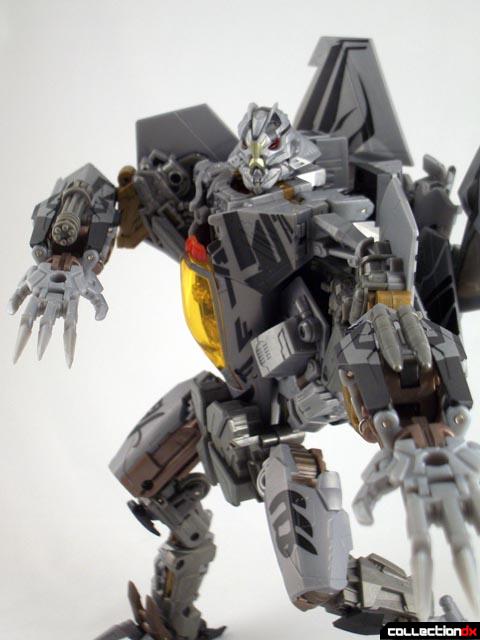 I'd rather they give me a standard, low key box and spend that extra buck or two on another pass on painted highlights and details. The gears and mechanisms would pop a bit more if given a pass of paint. Otherwise, as you can see from the pics, the rest of him is molded in a flat silver color with some parts in a rusty gold color. These are nitpicks though and overall Starscream looks great. 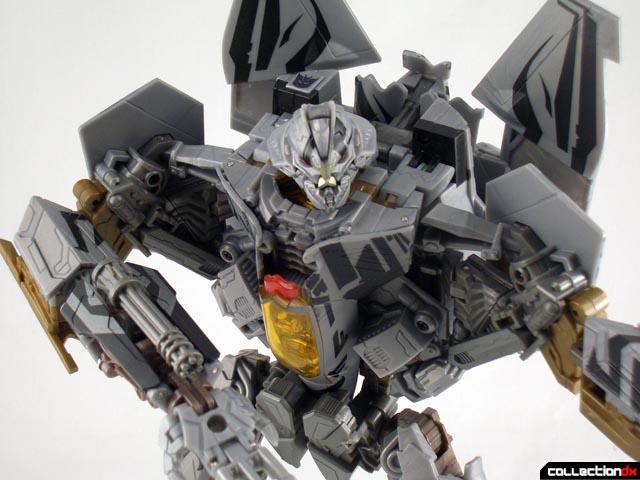 So he looks pretty, so how does it handle? Good. Real good. Articulation on Starscream is very generous. The legs feature tight racket joints that hold poses with great ease, and the arms have some nice hinges in the shoulders that give them a nice range of motion and make action poses easy. There is no rotation joint in the wrists, however, which strikes me as a bit odd as the figure is well thought out otherwise. It’s not a huge complaint, but it is something I notice every time I fiddle and pose this guy. 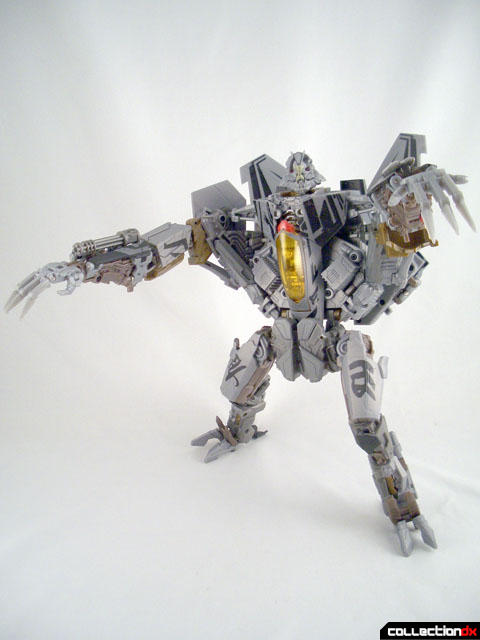 An arm mounted rocket launcher is included and indeed fires a missile. This launcher is a bit awkward looking but it is nice that they included it. Mine stays packed away. 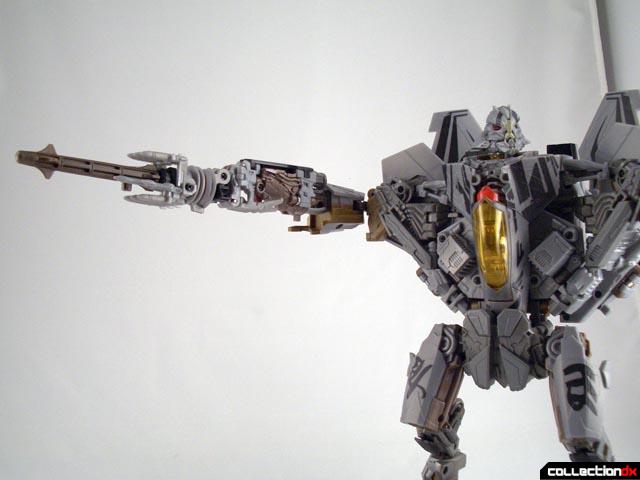 Built into his arms are a pop-out Gatling cannon and missile launcher. Just pull back on the little red lever located on the back of the arms and Starscream is ready for battle. 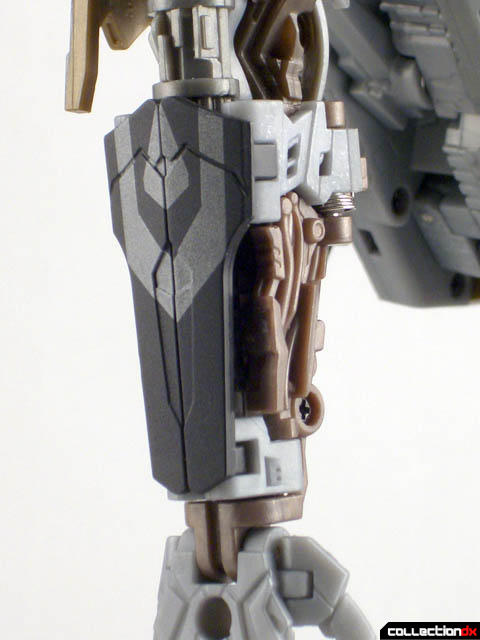 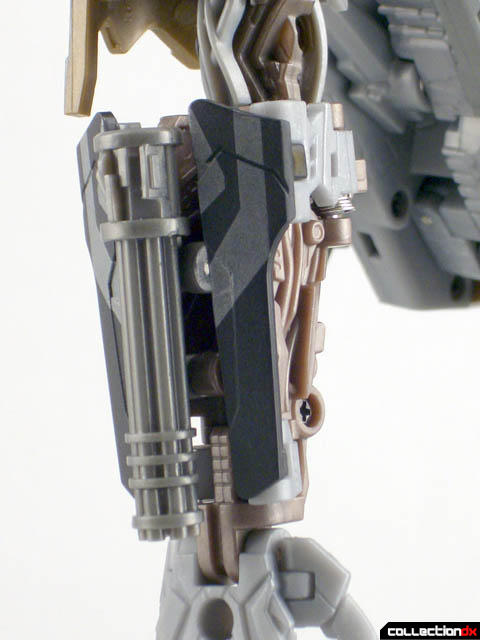 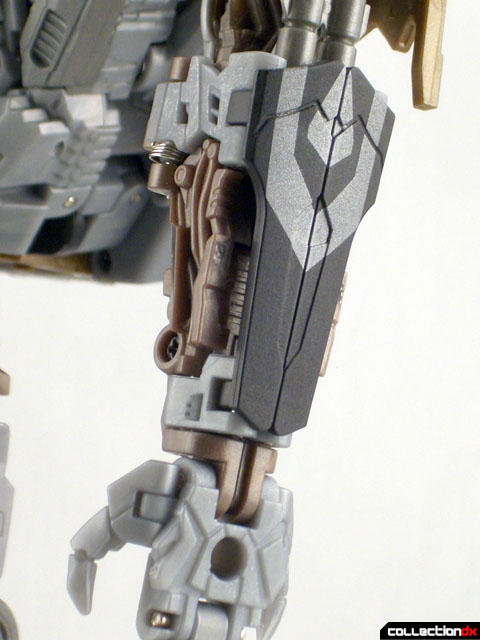 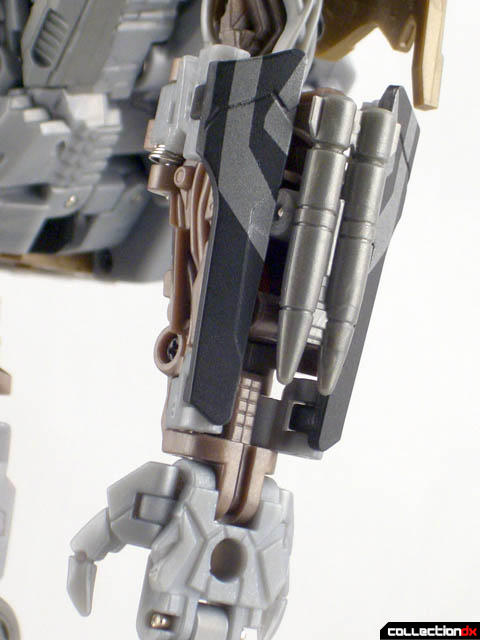 Starscream's alternate mode is an F-22 Raptor and I must say Hasbro has definitely upped their game with this Leader-class release. The last transforming jet we got in this scale was the movie version of Jetfire, and while he looked good from the top, the underside was an ungodly mess of kibble. This time around Hasbro has done a better job of hiding the parts and pieces in vehicle mode. He's a bit thicker than he probably should be for a Raptor, but it all looks much cleaner on the underside.

The removable missile launcher can be attached to the underside and flipped out to fire while in jet-mode. With the launcher deployed, though, you cannot ‘land’ it on the ground. It must be flipped back in to do that. 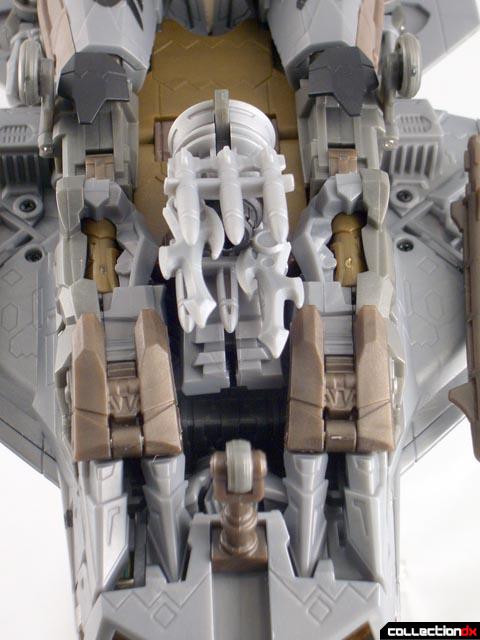 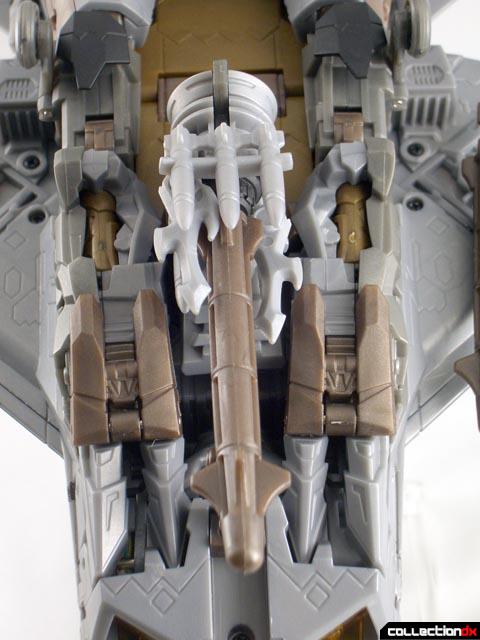 Being a larger Leader-class release it does include some lights and sounds.

In jet mode, pressing the Decepticon logo gives you either the sound of a jet flyby or the phrase "No one can defeat Starscream."

In robot mode you can push the Decepticon logo on the top of his right shoulder and you get the transformation sound.

The button from jet-mode is still accessible on his back in robot mode. So if you’re so inclined you can activate the fly by sound.

Pull down on the cockpit canopy will activate the phrase "No one can defeat Starscream" or "The Decepticons will crush the Autobots." The chest panels open forward and Starscream's jaw will move when you activate the sounds this way.

Whenever you activate these sounds the chest, eyes, and jet intakes light up red. Sound effects are loud and clear with the lights being suitably bright.

Overall, Starscream is an excellent toy and a great representation of him from the films. My only real complaint is the lack of rotation in the wrists for the hands, seems a bit off considering how well thought out the rest of the toy is. It's not a deal breaker for me by any stretch of the imagination and it shouldn't be for you either.

Starscream is on shelves now so go get one while you can. You won't regret it. It's awesome, transforming robot goodness.

7 comments posted
I saw this at my Target

I saw this at my Target twice, almost getting it but passing on it.

Atom, in case people ask, I JUST opened TakaraTomy's MPM-1 Masterpiece Movie Starscream yesterday, and it is my next review.

Obviously just a more-expensive repaint than the US release you covered here, I have to agree with everything you stated above. Good robot mode, awesome detail, weird what they did with the wrists, fair transformation, and jet mode looks like it's pregnant but it's far more tolerable than Jetfire's alt mode was.

Mr. EVA, I am curious to see your experience with the Japanese Movie Screamer in your next review. Does it have diecast parts?

Yes, thank you for sharing your experience Mr. Atom, but I'll pass on this one. I like Mindwipe better only because of personal aesthetics.

BTW Atom, the angle shot you took in Picture 20 is realistically eye-catching. I can see you had a lot of fun playing & shooting pics of Screamer.

As much as I like Starscream (Both original and movie), I'm not getting this figure. Instead, I'll get the Masterpiece version.

Yeah I know it's more expensive than this one, but I like the more realistic paint than these stupid tattoos that ruined the whole "Robots In Disguise" thing.

I will have the review up for the MPM-1 set by the end of the week.