I remember playing the original Metroid on my Nintendo back in the day. While I enjoyed the game, I never would have imagined that the title character, Samus Aran, would go on to be one of Nintendo's most iconic characters alongside Mario and Zelda.

Max Factory and GoodSmile teamed up with Nintendo to release a figma of the character, and the resulting product has been in such high demand that the company has continued to offer rerelease after rerelease.

When I bought this figure, I was told that it was an original release and not one of the reissues, if that means anything.

The first thing I notice when I pick up Samus is the rather solid feeling. The toy seems much more toy-like than other figma releases. Never once did I feel like I was going to break something. The overall construction of this screams quality. 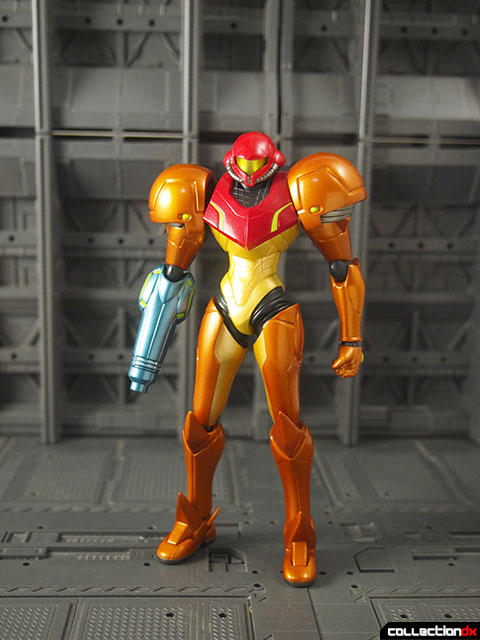 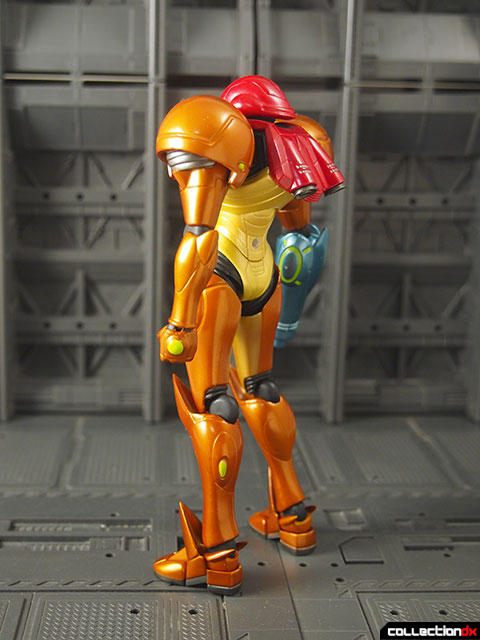 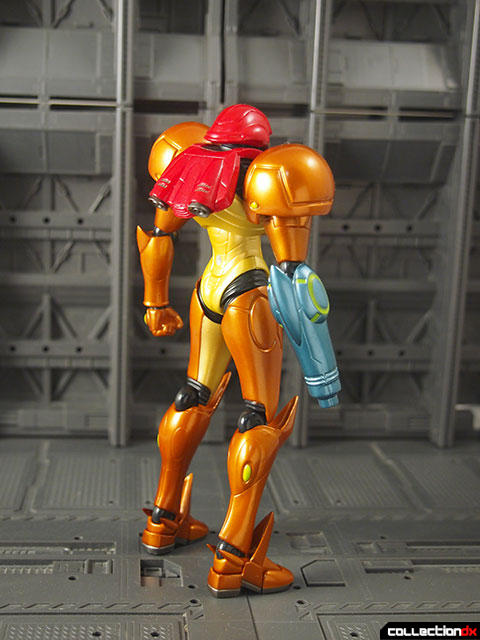 Articulation is great. She's got a ball jointed head, dual ball shoulders (with independent shoulder armor), elbow and wrist joints. Hips have double balls concealed in sheaths, double knees, and poseable ankles and bending toes. The hands are removable and can be replaced with any of the included alternate hands. Because she's only got one hand, she only comes with half the amount of hands that a standard figma has. 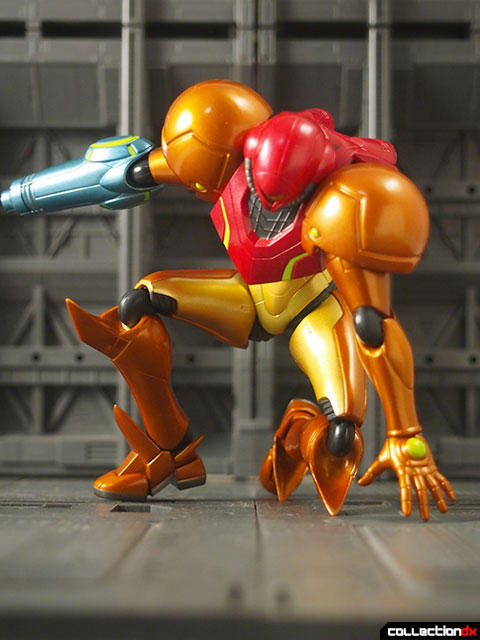 The cupped hand allows her to brace her firing arm. 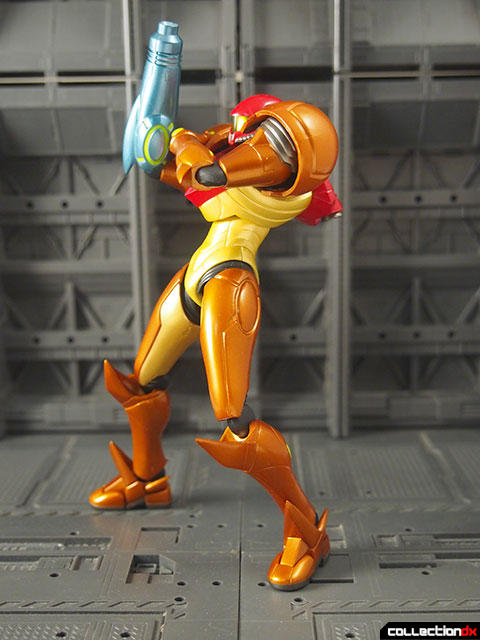 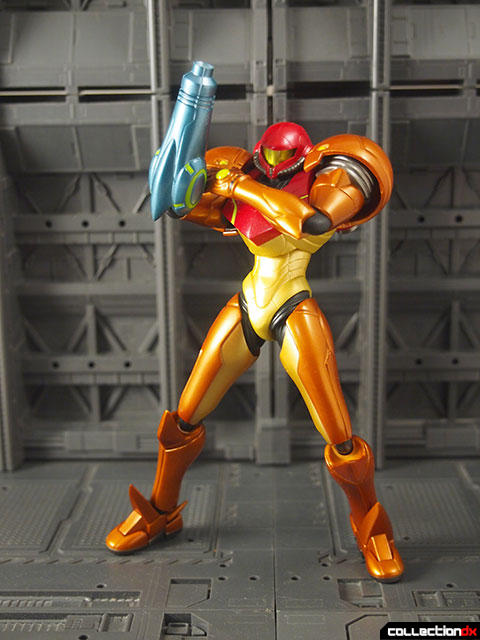 The splayed hand allows her to say hello! 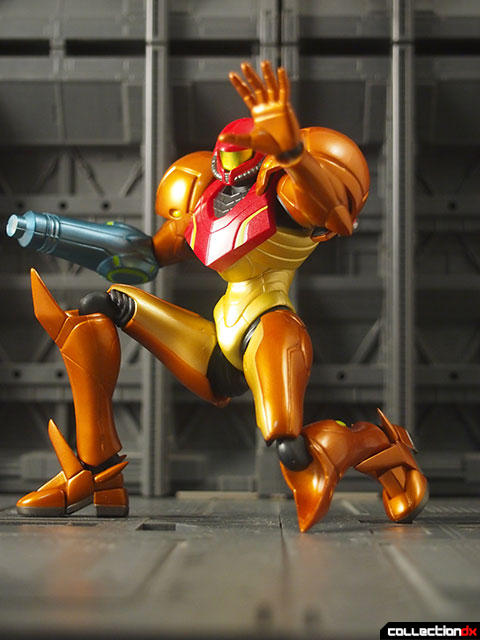 A "Thumbs-up" hand is included! Yatta! 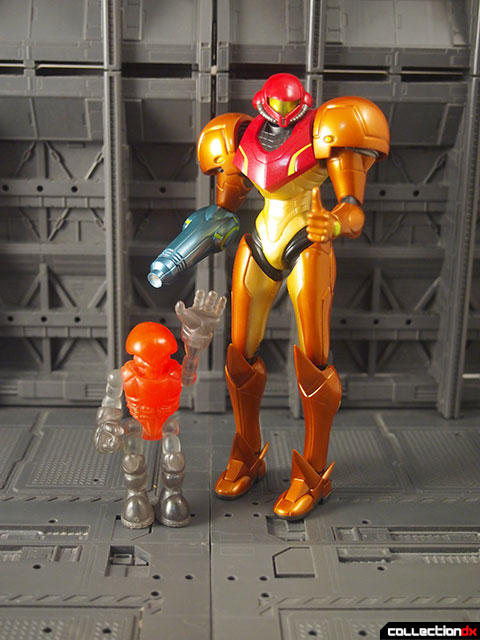 And finally, a weapon holding hand is included, but no weapons come with the figure. 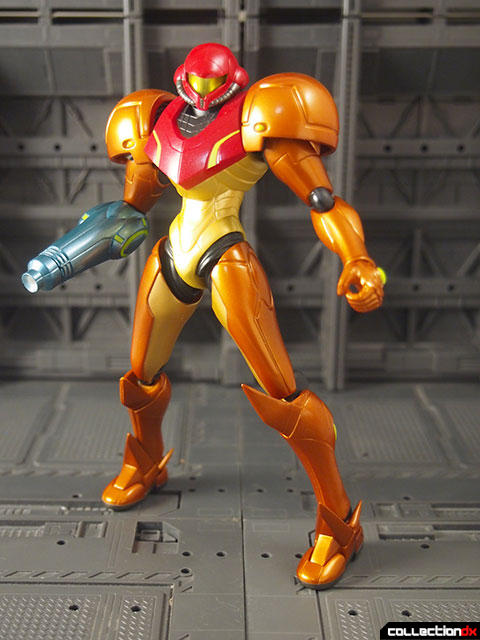 An alternate tip to the beam cannon is included. 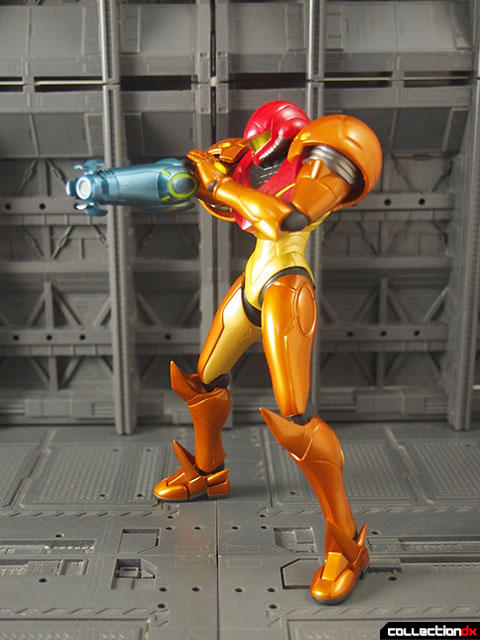 As well as two different beam effect parts. The parts fit into either tip of the beam cannon, however the fit on the single beam is rather snug. 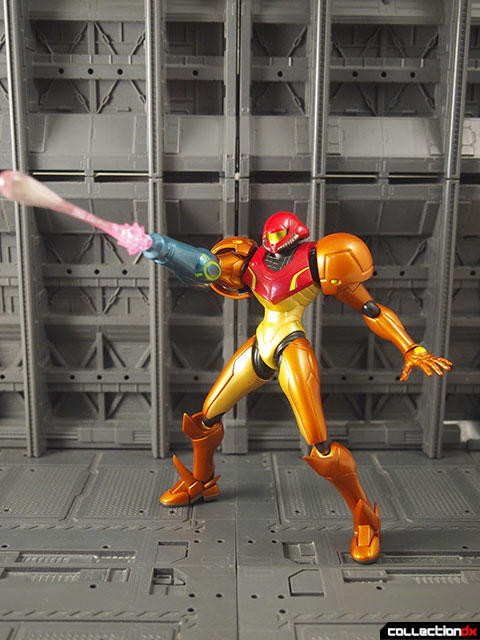 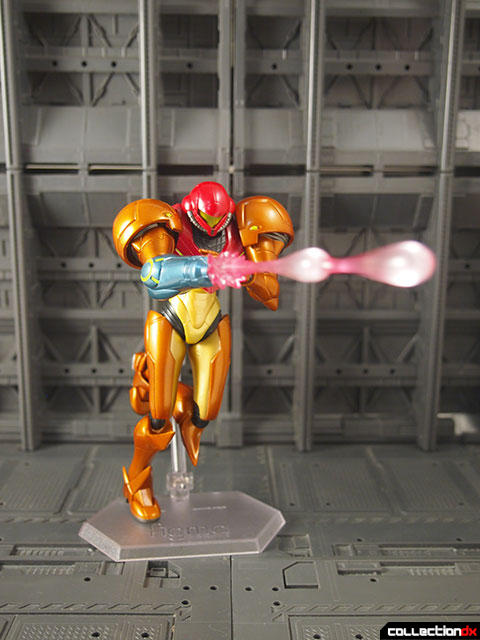 The standard figma stand is included and does a great job supporting the figure in a variety of poses. It connects via a hole in the back of the figure. 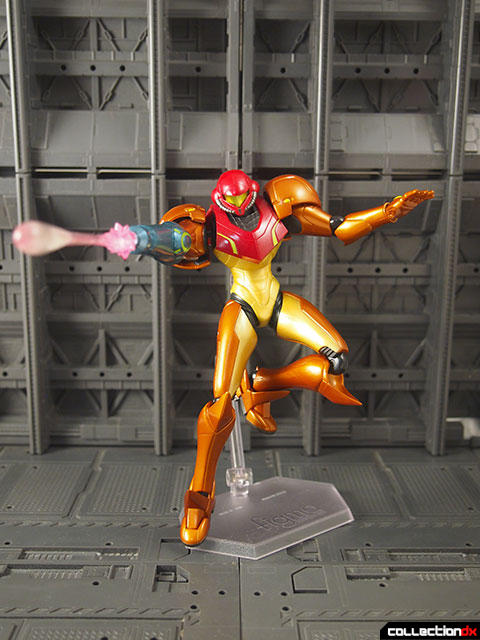 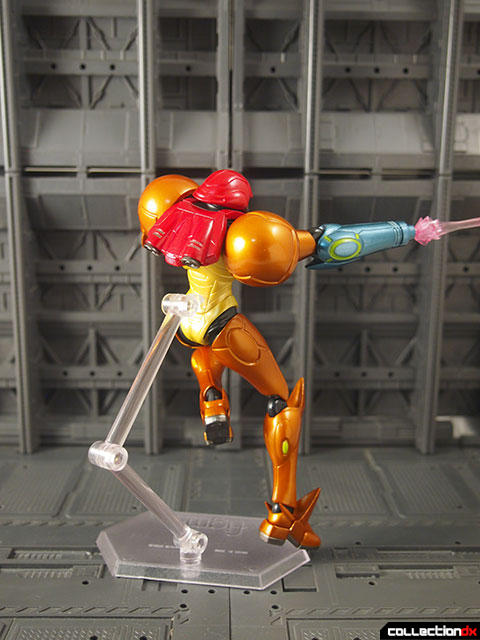 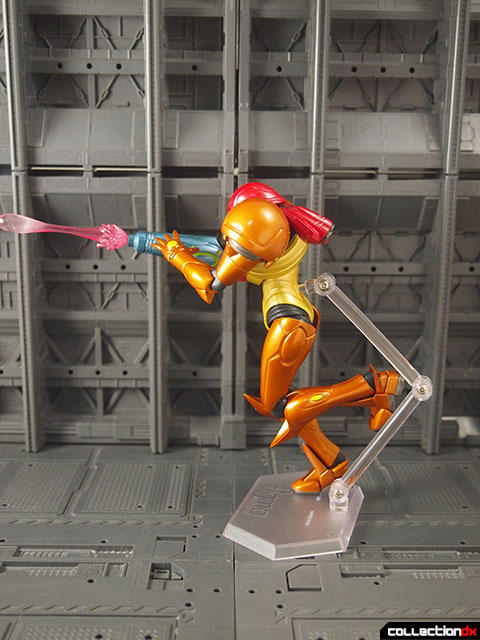 Samus in her Morph Ball configuration is represented for when she needs to fit into tight places. This solid ball is nicely detailed and can also be displayed with the figma stand. 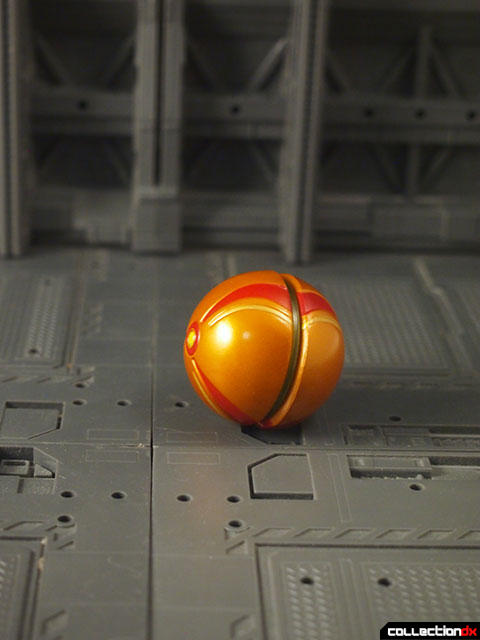 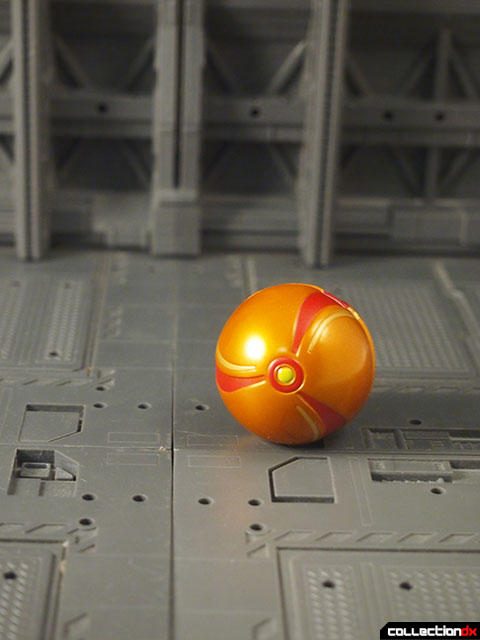 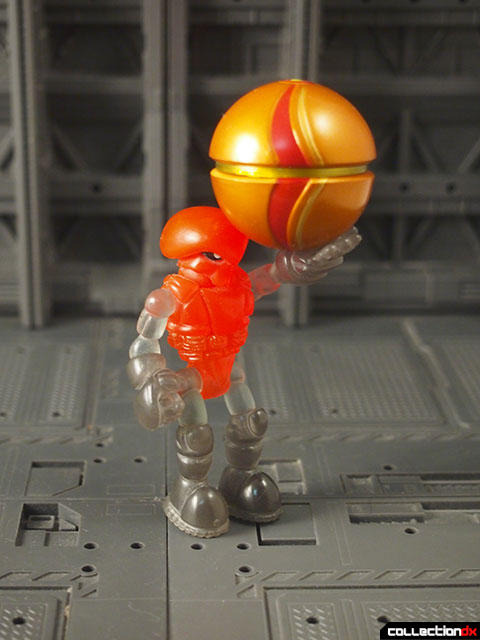 Overall, a great release that's not to be missed by Metroid fans. Too bad they didn't offer an alternate un-helmeted head. 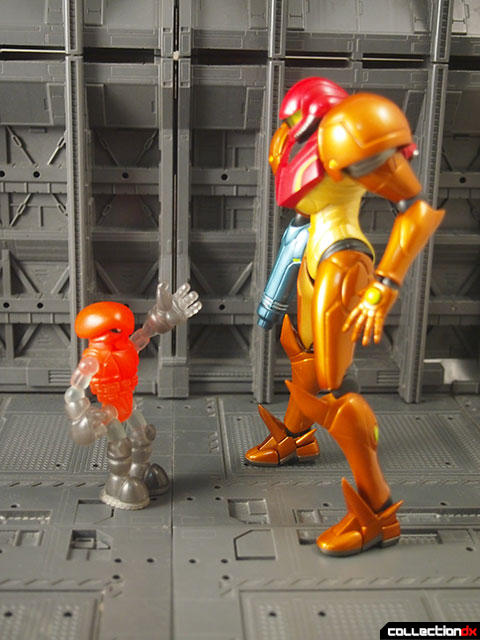