Battle in Space set is only just starting to pop up in certain stores. Wont be long until all the big retailers have them. I, however took the online route to get mine since it was meant to be a Christmas present for myself. I can't tell you how psyched I was to receive it. Now that its in my hands, I can show you guys whats going on with this playset so you can decide if it's a worthwhile buy-it-now or wait-'til -later purchase.

The Battle in Space set comes in the new Reveal the Shield colored box that carries over the Generations design. The figures are neatly laid out in all their splendor. In the middle you will notice a mini robot. This here is Mini-Con Nightstick who becomes Cyclonus' gun. If you look even closer still, you'll notice that this set comes with the Matrix! Nice...even nicer when I talk about it later on in the review. 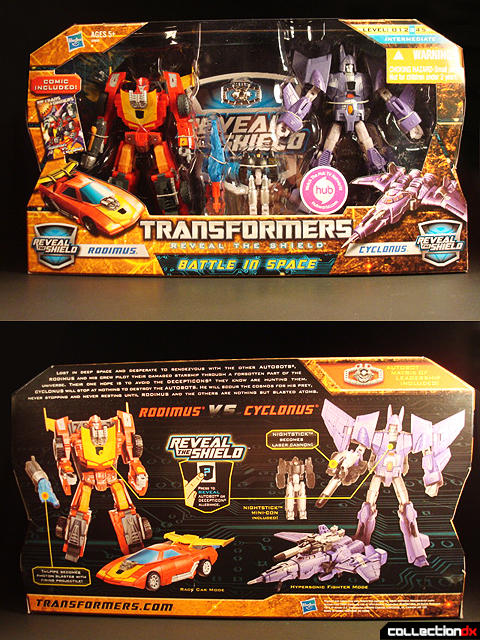 First up is Rodimus in his cool Classics sculpt. First thing I noticed is how horrid some of the paint was. Very quickly applied and sloppy. Even his rubsign is crooked. I'm a little put off with the bright red color and the low contrast in the yellows used for his flame job.Otherwise the figure is great as far as design. 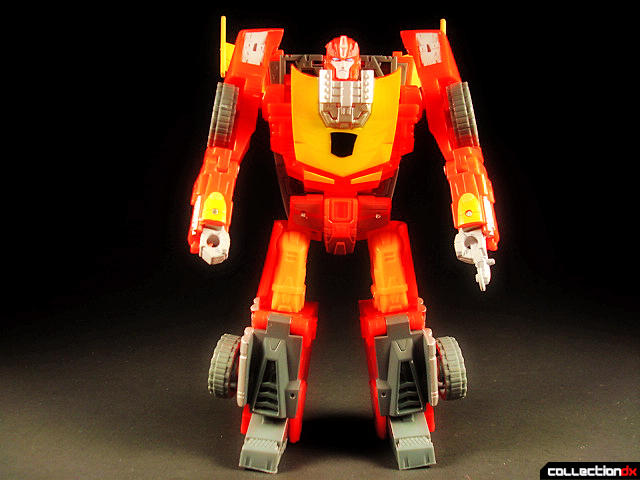 The back is very simple but its refreshing to not see a bunch of parts hanging off the back. 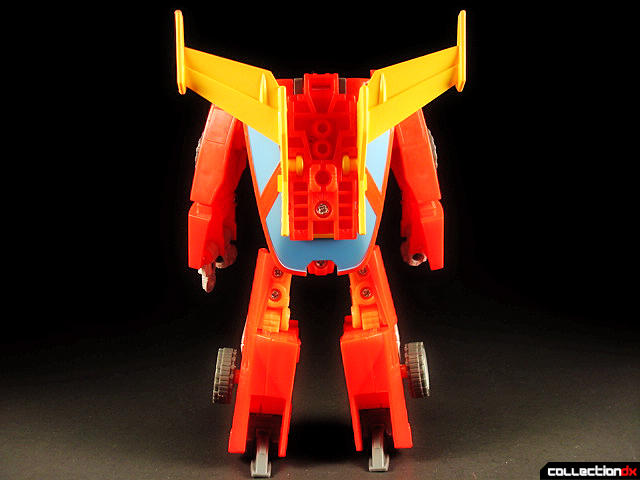 When we take an up-close look, we can see the sloppiness I was talking about. It looks like those little fins on his head were painted with watercolor paint. Thankfully, the sloppy paint does not carry on to the rest of the figure. This figure has no light piping. 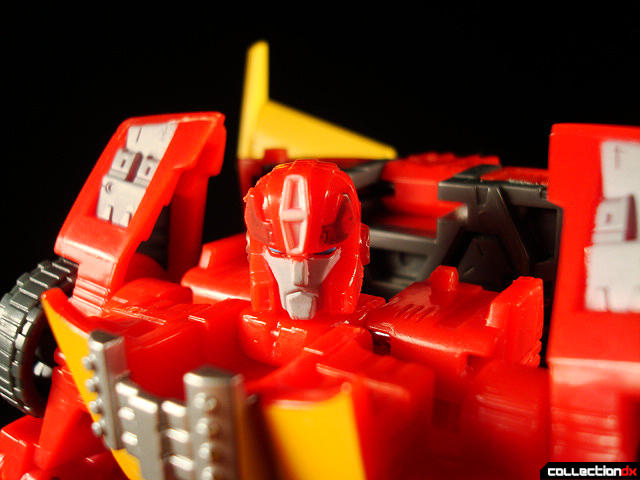 His tailpipe becomes his gun in robot mode. Check out the unawesome projectile he shoots. It looks like a water gun when using this missile. Notice they round off the tip so you can't impale any eyeballs. Not that you could even if it was sharp as the force the spring provides is minimal. 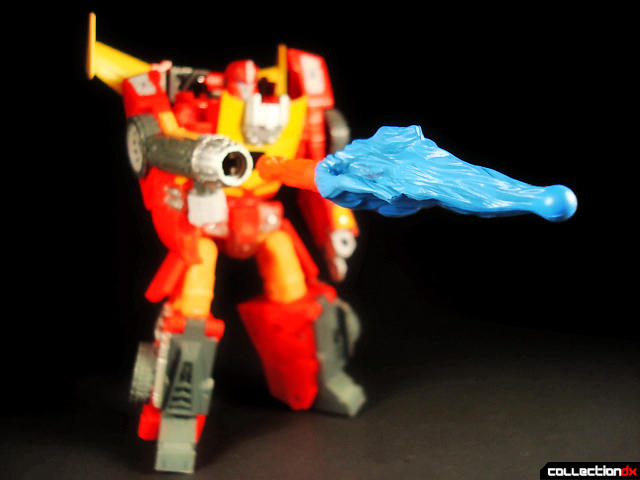 His chest sports the new-style rubsign. Give a little rub and you can see he is indeed an Autobot. 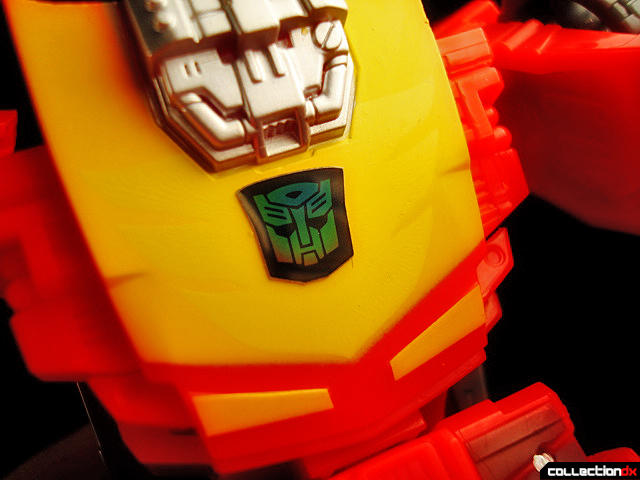 His transformation is rather cool but simple. His car mode is clean and sleek. However, the baby blue windows are cheesy looking... or slightly cartoon accurate depending on how you look at it. 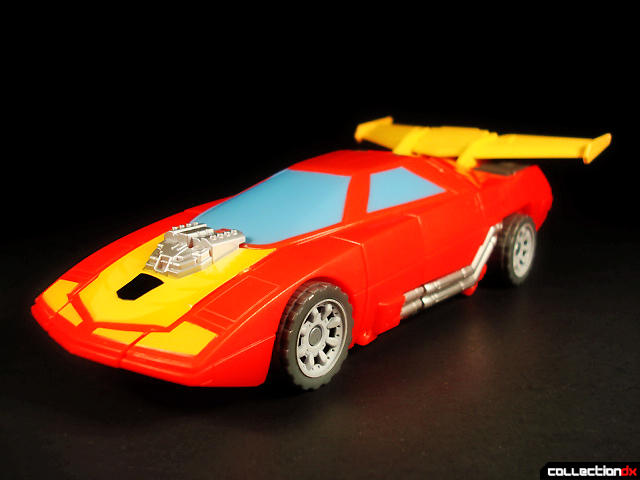 From the back, things are still relatively clean. If it wasn't for the exhaust tip, there would be an awful gap back there. Again, here we see the water-looking flame gimmick/missile. 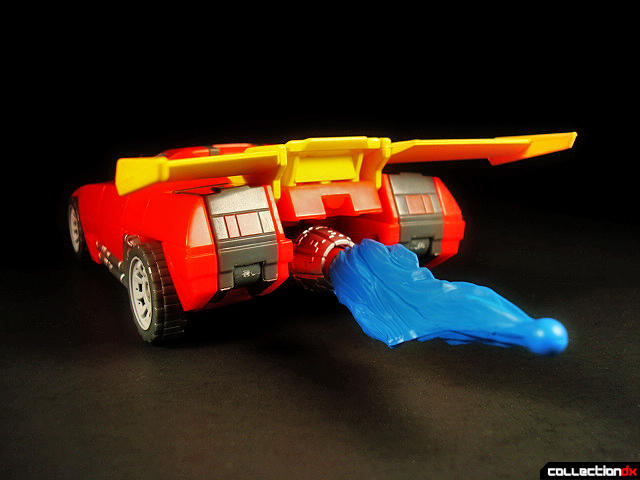 Next we have Cyclonus. He seems to be of higher quality than Rodimus. His molding is sharper, paint apps are better, windows are translucent plastic instead of painted and he has much more detail. It is instantly obvious that he is the highlight of this set. 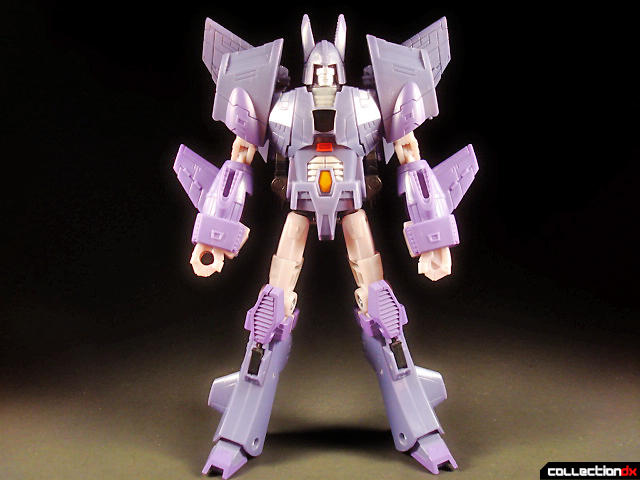 From the rear, he looks really clean with none of the nonsense other transforming figures have. 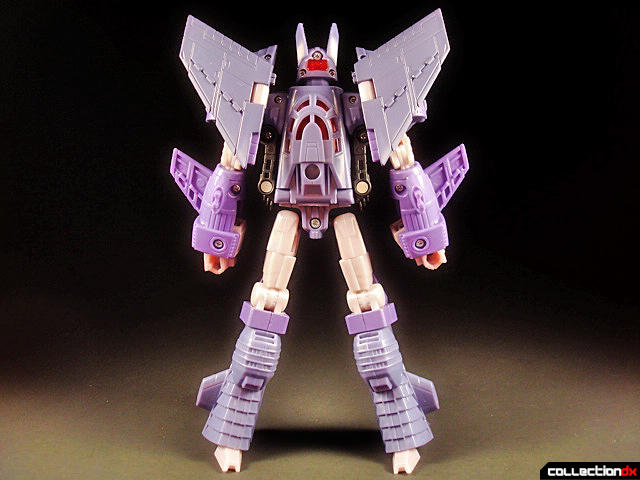 Unlike Rodimus, Cyclonus has some really cool light piping. Those red eyes you see are glowing by way of the lamps I used to take these pictures. Glorious. 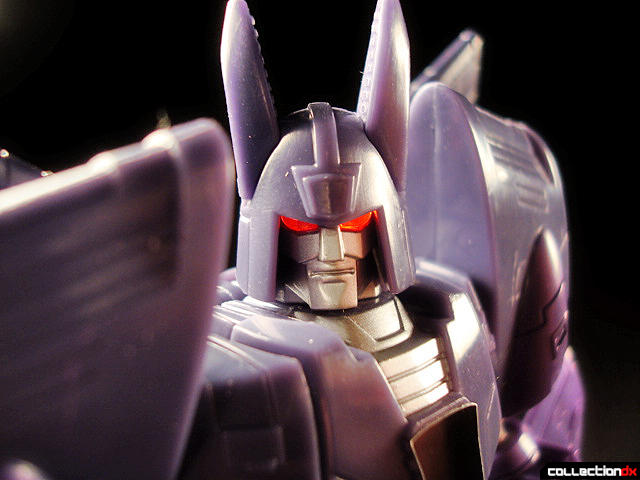 My Cyclonus had his rubsign applied straight and with a little rubbing he reveals himself as an evil Decepticon. 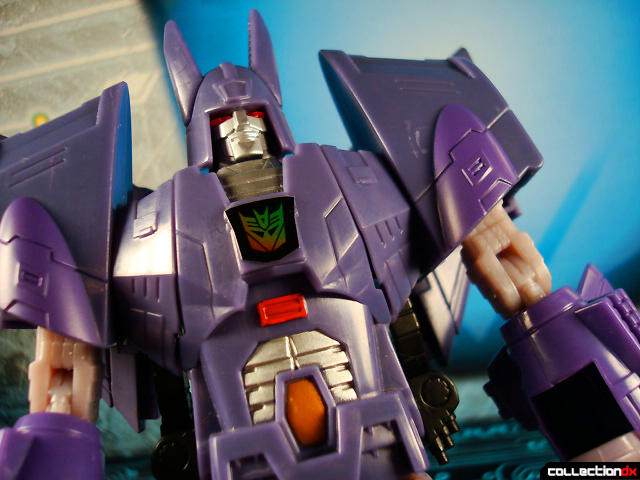 His transformation into his alternate mode was much more interesting than that of Rodimus' transformation. There is a lot more engineering and movements to achieve his ship mode. 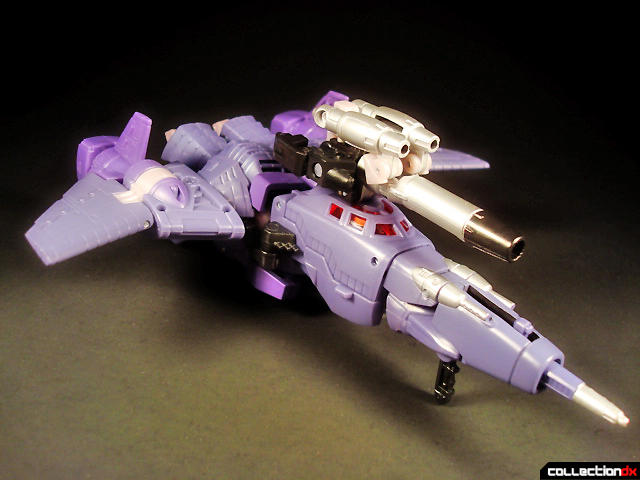 If we take a look at his underside, we can see that he has landing gear which is actually retractable. Very nice. 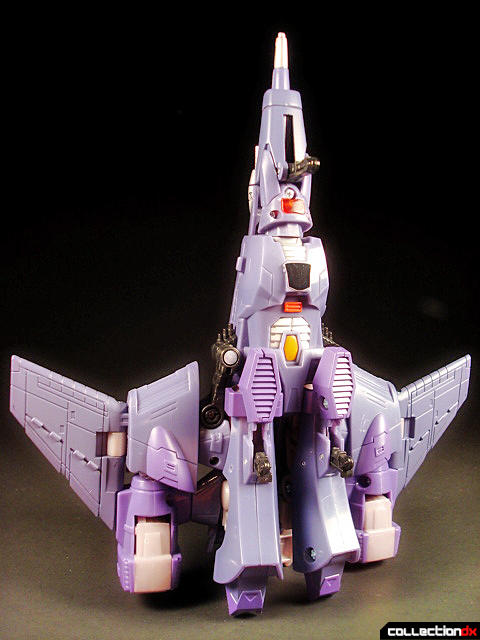 Remember the Matrix I mentioned? I never in my wildest dreams expected it to be made out of my favorite stuff...METAL. Yeehaw! I thought it was cheap chromed plastic but when I held it in my grubby hands, I knew I held something special. Bad news is that Rodimus cannot hold it. However you can use it as a necklace if you wanna show it off. 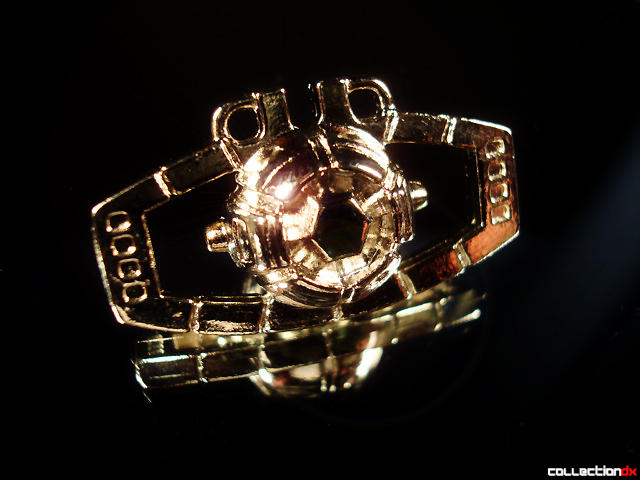 Another bonus that's included in this set is a full color glossy comic book by IDW. It's got Animated style illustrations which I dont care for too much but the artwork is really good overall. 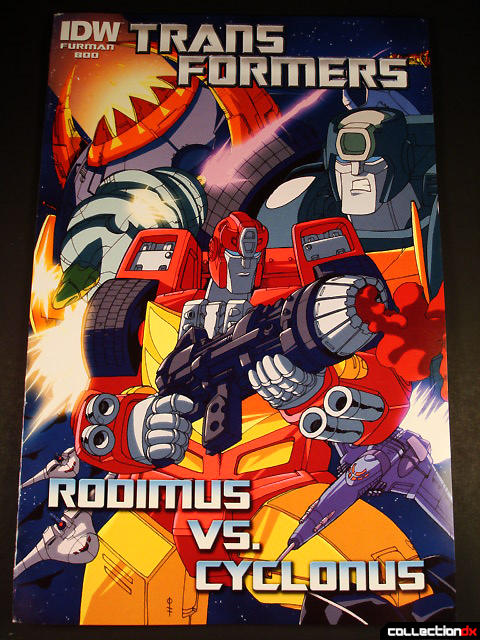 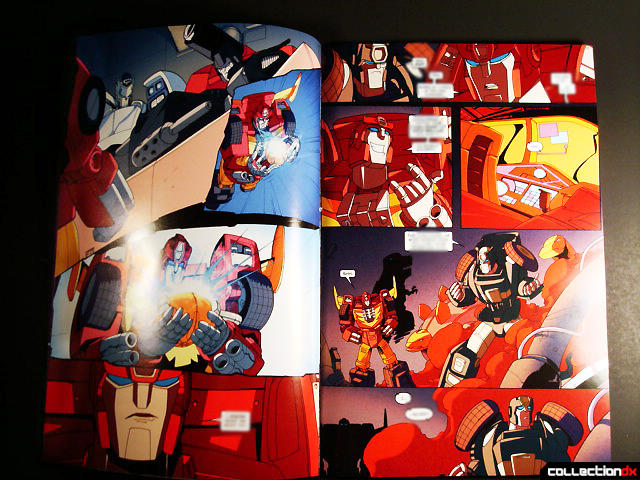 Now, we can't forget about little old Mini-Con Nightstick can we? Don't get too excited though if you noticed his Decepticon insginia, It doesn't come with one, I made that myself. I suggest you do the same so he looks cooler. He's got nice atriculated elbows for some extra play value.

By simple folding his feet in and folding him in half, he transforms into a gun for Cyclonus. 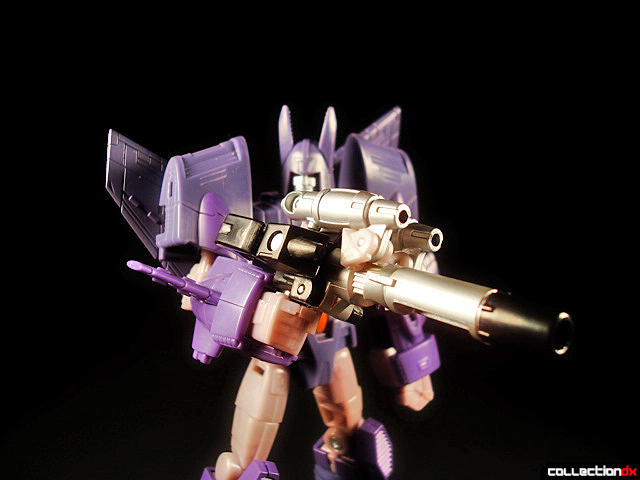 I noticed that the inner box makes a pretty cool backdrop for these figures. I've taken the liberty of taking some photos using the inner box. 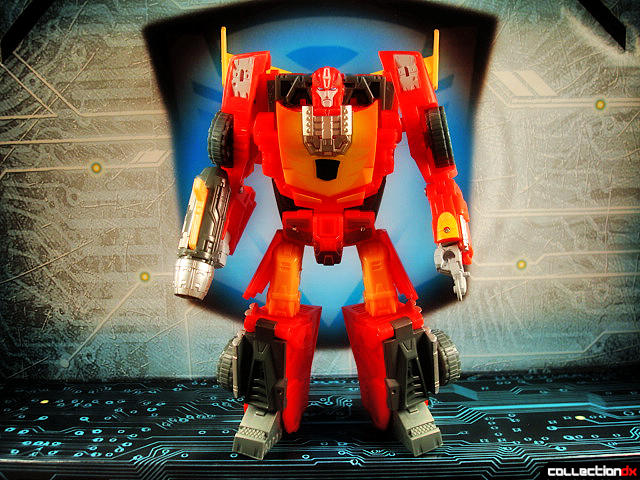 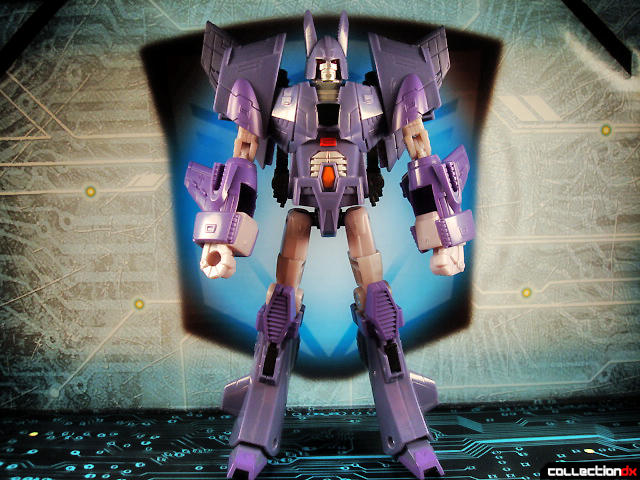 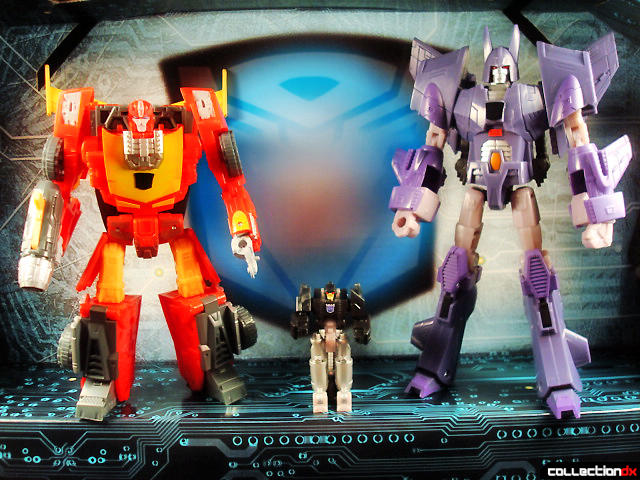 Overall this is a nice set and will appeal mostly to G1 fans but there is enough good things about this set that it will appeal to just about anybody including casual fans. It's not perfect, but the price is right, the figures are nice and there are a couple of welcome bonuses. An updated Rodimus would have made this a homerun. Look for this set to hit wider distribution in the near future. 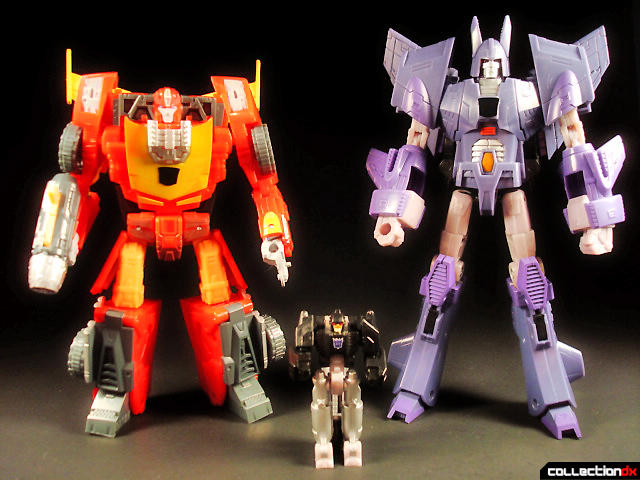 8 comments posted
I missed my chance to get

I missed my chance to get both of these when they originally came out. Though the bland color pallet is quite cartoon-y, I think I can put up with it.

...Damn, I wanted to be the one to cover these.

Yeah sometimes I look at Rodimus and think about the bland colors..it almost looks like he could transform into a Burger King logo with those colors, but once you start messing with him you get over the whole color thing

Man, you guys made it look so much fun. I think I'm gonna give it a try to showcase one of my robot toys here when I apply for submission.

Personally, I think Hasbro chickened out on the color schemes for Rodimus. They oversimplified his tampo designs to the extent of leaving out the cool flames which defines his character clearly.

BTW Mr. Chachi, may I ask what local store did you buy this boxset from so I hopefully won't buy it online like I normally do?

Everyone asked for this color scheme when Rodimus first came out years ago. Cyclonus also.

It's kind of funny because when it first came out, everyone complained about the clear windows on Rodimus and how the cockpit wasn't detailed enough, he had blue windows in the cartoon and movie so why doesn't the toy?

Now people are complaining about the blue and want the clear. Personally I think the bright colors on these guys is much better looking. And I think a lot of the demand for that scheme has more to do with money value that aesthetics.

Over the past ten years I've gone from a giant G1 collection, to selling it all off, to getting into Classics line as it started, sold them all when I got bored/frustrated (it is too frustrating and depressing for me to chase after or pay $40-50+ for a $10 figure that can be bought in any Target or TRU - and the markup is just because you weren't fast enough to beat an ebay scalper) - but with Jazz and now this set, I'm hooked all over again.

I also wish they did a better job with the flames. They ARE there but there is hardly any contrast between the two yellows chosen so it looks invisible.

I bought mine from BBTS although I read they are popping up in Meijers stores which are not local to me. When they are available at major stores, you're looking at a cost of 19.99 which is very cool for what you get.

I will prowl (pardon the pun) the stores for it tomorrow as these two were a favourite back in the G1 days..

Hey, don't forget that Cyclonus can use Nightstick like a gun arm as well. When he's in gun mode, just flip Cyclonus's hand inward so that the jet nozzle is pointing out, then plug the back of gun Nightstick into the nozzle. It's pretty cool!

Anyway, I'm not sure if I wana get the set, but it's pretty cool. I like the prevous Cyclonus just fine, but I never did get Rodimus. That is one of the more bland color schemes for 'em, though. I understand the nod to the original toy, and I suppose he's kinda desirable in a cheezy way. I do like the matrix, though! That's almost a deal, there. Still not sure.

I was just going to comment on that very thing Alexx. A lot of fans don't know they included the connector port on Nightstick so Cyc could hold him Japanese Targetmaster Style (from Headmasters).

hasbro mentioned this at the 09 Botcon but didn't include it in the instructions for the orginal release.