Kanada on his motorcycle is probably the most iconic anime image in both the Western or Eastern hemispheres, so when I started seeing pictures of Project BM! 1/6 Kaneda and his bike, of course, I was way interested, but who the hell is Project BM!? 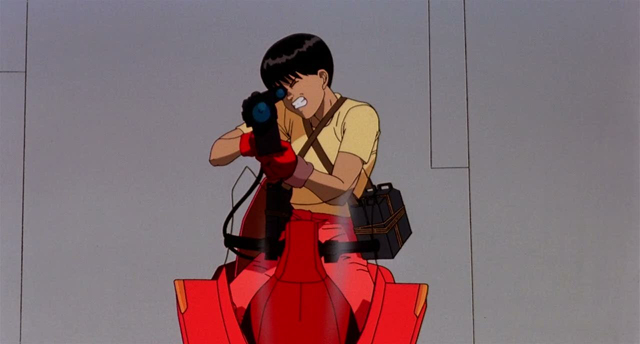 "Project BM!" comes from ‘B’ for Bandai and ‘M’ for Medicom Toys, with the 2 companies producing Projects together. Medicom Toys was responsible for the design and manufacturing of the Shotaro Kaneda figure (you can read that review here.) Bandai, under the supervision of Katsuhiro Otomo, produced the bike.

Kaneda's bike ships in a big box. Images of the bike with Kaneda riding it decorate the box, and are printed in a high gloss against a black satin finish, just like the Medicom Toys released Kaneda figure.

Inside, the bike is wrapped in plastic and stored in a styrofoam coffin. With the exception of the panels, the bike is completely assembled. Just add three triple AAA batteries and you’re good to go.

This initial release also ships with a set of blank cowling parts and two sticker sheets, so you may recreate Otomo's DVD illustration.

It's nice they included these, but I probably won't be doing anything with them other than storing them in the closet.

The seat of the bike, as well as the running boards, is made of rubber. Using different media where appropriate really gives this piece a high-quality feel.

The wheels are a heavy, high-density rubber, and the shock absorbers actually work on the front fork.

The frame and almost all of the chrome parts you see here are made of die-cast metal. The removable panels are each individually wrapped in plastic and stored in a panel on the back of the styrofoam packing. Each piece is made of a thick, heavy ABS plastic that feels good and solid in the hands.

All the red, plastic parts of the bike appear to not only be molded in color but the outer facing parts are all treated with a high gloss coat of paint. It makes a very noticeable difference in person. Magnets are embedded into each piece which holds them in place tightly and securely with no fear of pieces falling off with even the most aggressive of handling.

The front cowling actually rises up, as seen in the movie and manga.

It doesn't stop there! Not content with it just looking pretty, Bandai went above and beyond to include lights and sounds. At the back of the bike is a two-position switch.

The first position is lights only, and they are very bright and noticeable even in normal daylight.

The second position is for lights and sounds. Flipping the switch plays a powering up sound while the turn indicators blink. Pressing the right pedal plays the sound of the bike starting up and accelerating. Pressing the left peddle makes the brakes squeal. All of the sound effects are crystal clear and loud.

If you feel the sound effects need a bit more oomph, you can plug in a set of external speakers by removing the left side cover.

1/6 scale is big. That is hard to grasp when you only own 1 or 2 figures, but when you start getting vehicles in this size, where to put it becomes a very valid concern. As fantastic as the Batmobile was, after several months I was left with the problem of trying to figure out where to store this 3-foot long collectible. It became this thing to deal with... And ultimately that's no fun.

Something like Kaneda's bike, however, still fits on the shelf, can be picked, handled, and played with without overtaking your space.

The addition of the sounds and not just lights really helps propel this to the toy "hall of fame", and in my opinion, not only is it toy of the year, it's the toy of my lifetime. Seriously, it represents everything I love about Japanese toys.

While the suggested retail price of $420.00 is very high, you actually get something that feels like it's worth every dollar in your hands without apology or excuses. We spend 100 bucks here, 50 bucks there, 150 for that, and many times these things come up short of what we expect of these prices. I suggest saving up and buying this bad boy. You will not be disappointed, no matter what kind of collector you are. Years from now people will reminisce about the pieces they wish they had bought, and the Project BM! Kaneda's Bike will be at the top of many people's lists.

If you decided to pass on a Kaneda figure you can still have some fun with Kaneda's bike all by itself and your existing toys.

worth every penny... man gotta get this one...

Wow!! The only way you can approve on this is the real thing...

The AUX output is bizarre..

...to actually hear the bike's sounds through your stereo speakers! :D

It would have been cool if a preloaded OST of Akira was in the bike, or at least the sounds you hear in an iron lung ward of a hospital, since they are one in the same.

Did the cat come with the bike since Bandai must love cats.

I think it's absolutely perfect that the 1/55 Takatoku Valkyrie fits so well into the seat intended for a 1/6-scale Kaneda!

Great video review Atom. I'm really tempted to get it after watching your review.

reviews like this should have warning labels...thing and review was so great I am weighing every two seconds to drop the 600 USD to get the bike and doll....sigh...how is the 1/12 version...do you have both and can you put next to each other...need to buy great...need to fight...arrggghhh...

broke down and bought one...I am weak, weak....thank god I don't gamble or smoke or I would be dying of lung cancer and having my legs broke by a loan shark...

How about Batman DX verison sitting on bike instead of kaneda???

I bought my Shotaro Kaneda and bike from HobbyLink Japan and I am very happy with them!

hi guys!! I am a fans of yours since years ago, I am from Peru and I am the first peruvian guy who gets this bike!!, its absolutely awesome, definetly one of the best toys of all the time, I can express with just one word what kind of collective it is, definetly this is a marvellous piece of art for sure!

I will upload photos on my gallery soon! please check my blog and let me know what do you think!!

One detail you didnt mention in this review is the little compartiment for the cigarrets, other neat detail ubicated in the middle of this great bike :)

Atom, I found myslef with two circular little magnets ubicated on the holes of the rear tire, very strong magnets I think, I had to remove them to ubicate the red plastic cover without problem. Do you have those magnets too? o.o