While I don’t watch a lot of anime these days, I make a point to check out well-done theatrical anime. I don’t live the lifestyle where I can commit to a massive anime series, but self contained movies are just the thing for me.

I had heard good things about Summer Wars, and I was a big fan of Mamoru Hosoda’s previous directorial work – “The Girl Who Leapt Through Time”. Needless to say, I was not disappointed, and thoroughly loved Summer Wars.

I’m not going to recap the whole movie here, for that check out our review here. But at a high level the story is about a family dealing with an internal crisis while a rogue computer AI is bringing the virtual world to its knees.

That AI is called Love Machine, and it is up to the real world family members to take it down. It’s a great story, with superb animation by MADHOUSE.
The two main avatars in OZ are Love Machine and King Kazuma, and both got represented as Figma by Max Factory / GoodSmile. Both were initially hard to find, but subsequent re-releases has at least made Love Machine a bit easier to get. 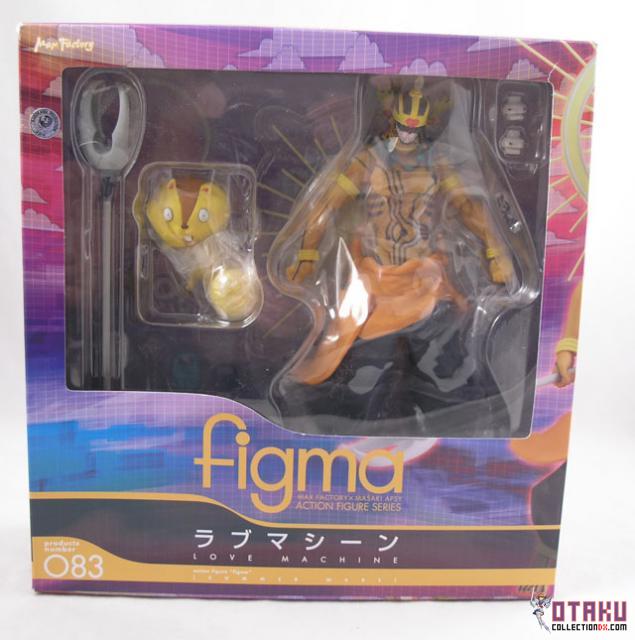 The box is your typical Figma box, but a bit larger. Love Machine is a large figure compared to other Figmas and there are some good sized accessories included. Inside everything rests nicely in TWO plastic trays. 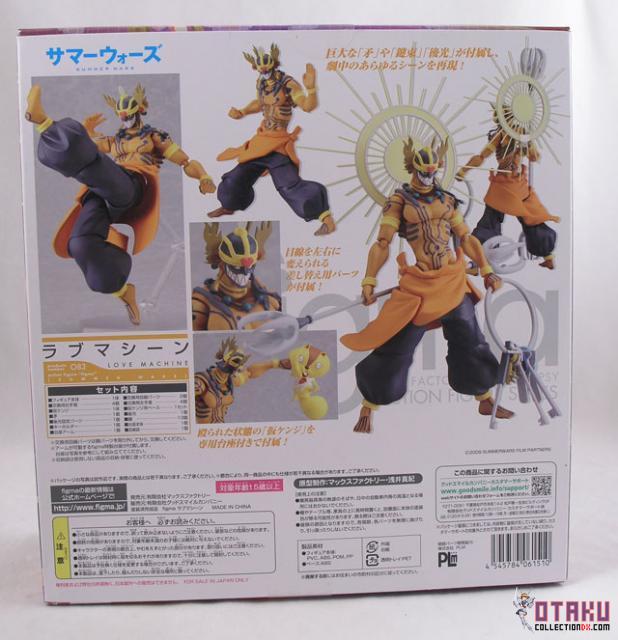 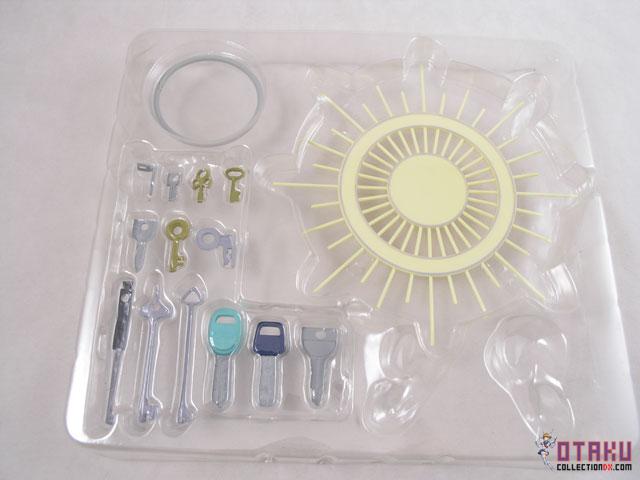 Love Machine is a really interesting figure. It’s hard to explain, but there are a lot of interesting things going on here that make it quite different from any other figma. If you watch how Love Machine moves in Summer Wars, you can see that the character has a very unique way of moving. This figure uses a unique combination of joints to showcase this unique style. 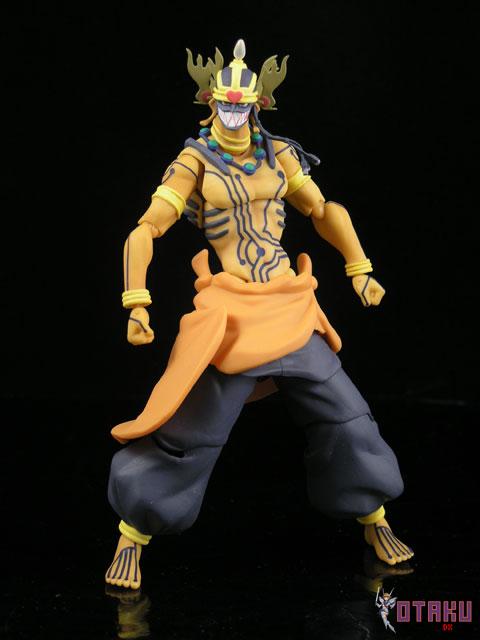 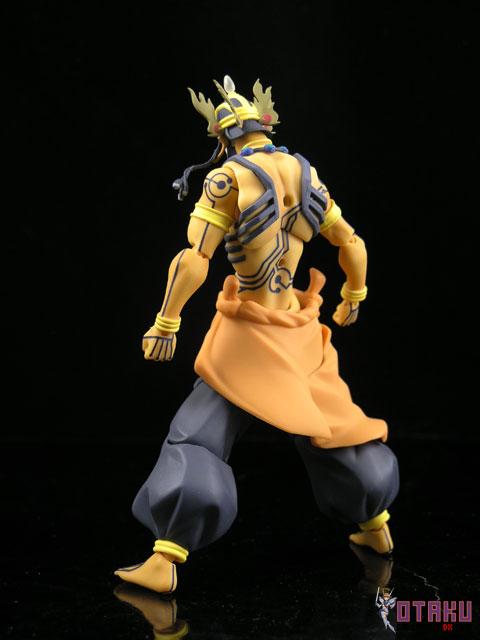 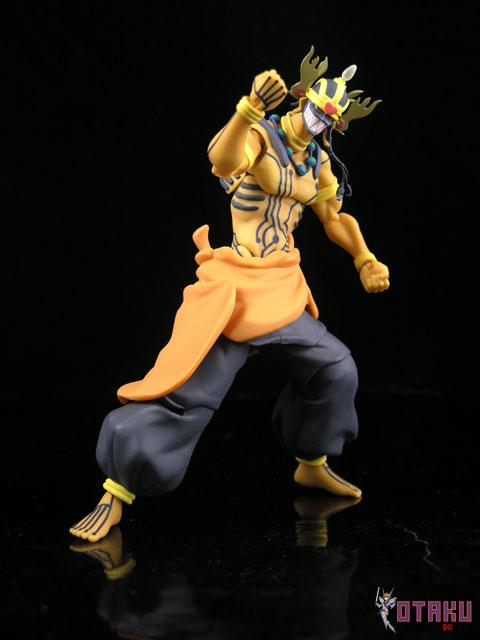 Starting from the Top the head features interchangeable face plates for slightly different expressions. Love Machine’s face reminds me of a cross between the Boognish from Ween and the Joker from batman. The hat resembles a cross between a Chinese and Tibetan monk, and it’s a theme carried throughout the whole character. 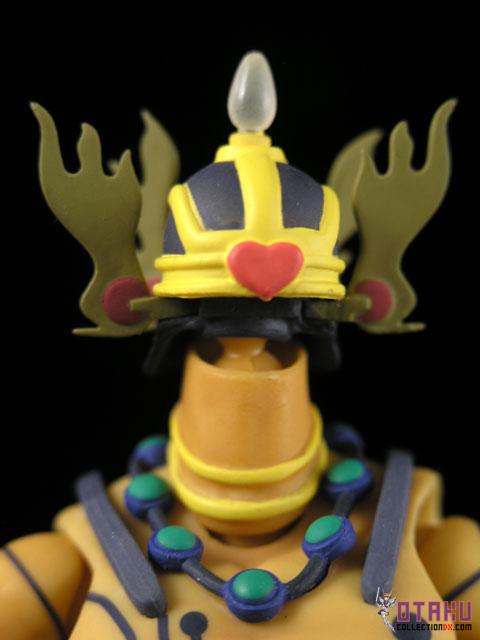 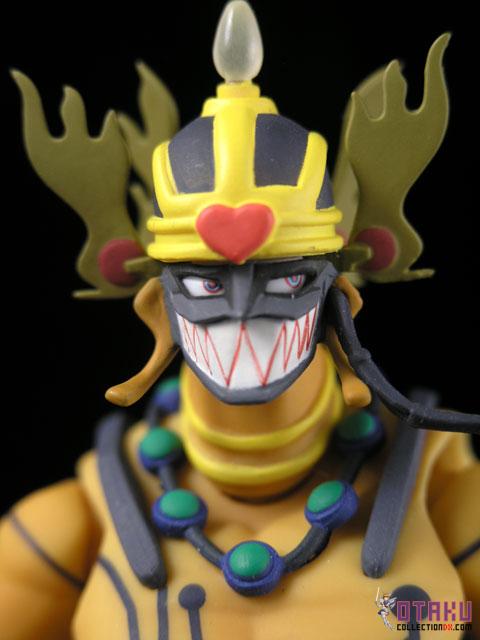 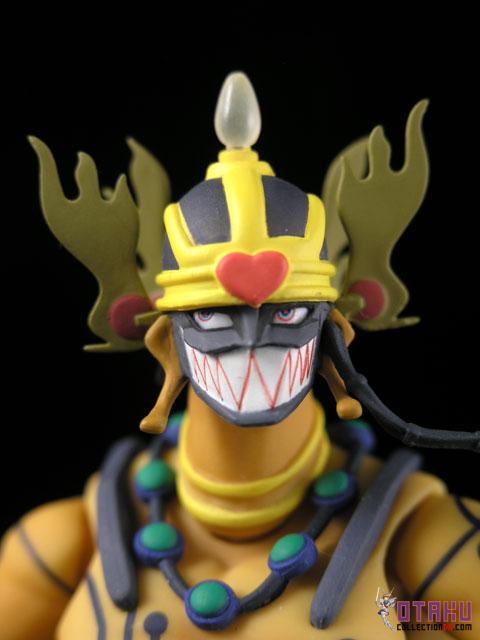 Separately molded decorations adorn the neck of Love Machine, which holds the head via ball-joint. Neck articulation isn’t great due to all the decorative material. 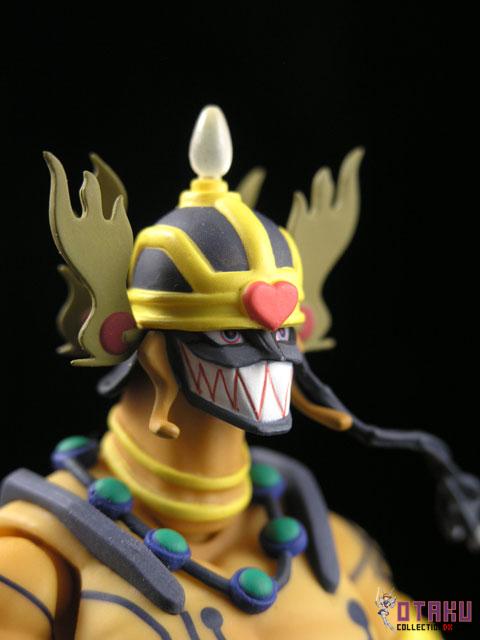 There’s an upper torso joint on a ball joint, and then a lower abdomen hinge joint. Love Machine is RIPPED. 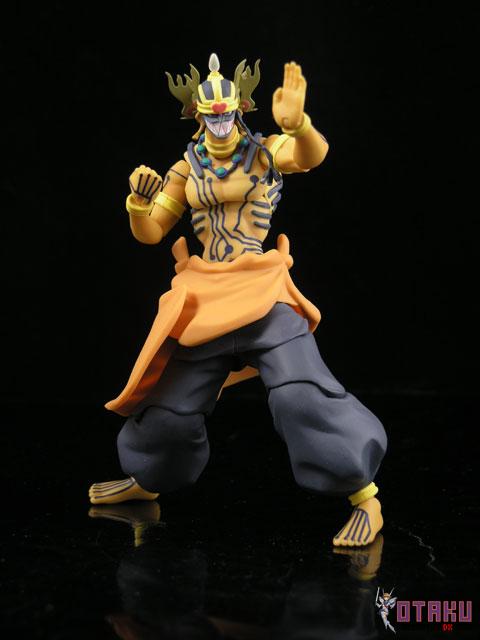 Shoulders and elbows are standard figma joints, and the wrists are peg and swivel joints that can be replaced with any of the MANY variant hands. 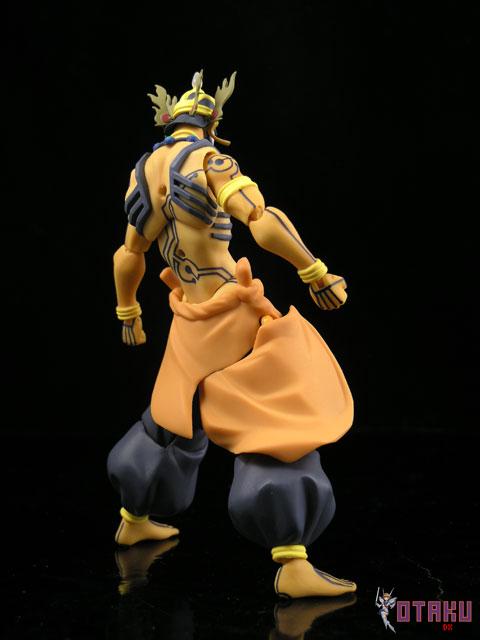 The torso is obscured by a fabric wrap similar in color to a monk’s robe. It looks like something that was once worn around the body but is now wrapped around the waist. This is a separate free-floating part and one of the sections is articulated by a figma joint. Underneath that is a rubber shroud covering the hip mechanics which appear to be ball joints. 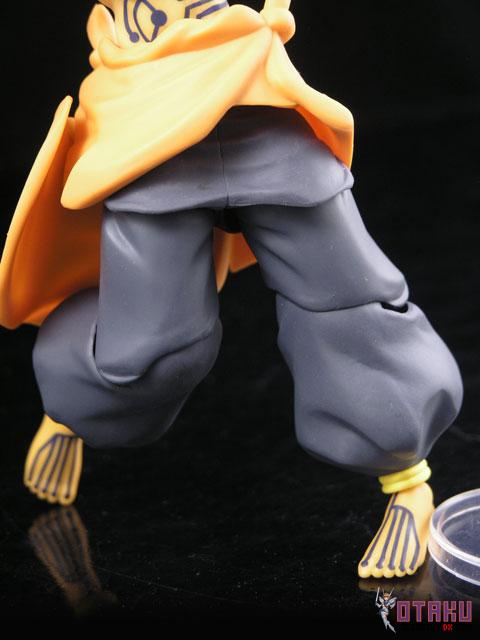 The legs are solid, thick pieces of plastic. I was surprised by the hinge joint at the knees, but it really works well with this style of leg.

The feet are of course connected via figma joints.

Love Machine sports a digital “halo” that is represented here by a plastic accessory. To get the look of the halo floating behind the figure, a small clear plastic connector is included that attaches to the back. The spines on the halo are VERY thin and look like they could break rather easily. 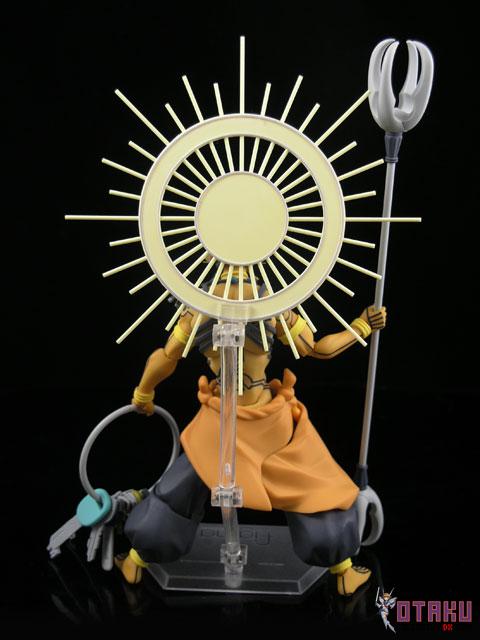 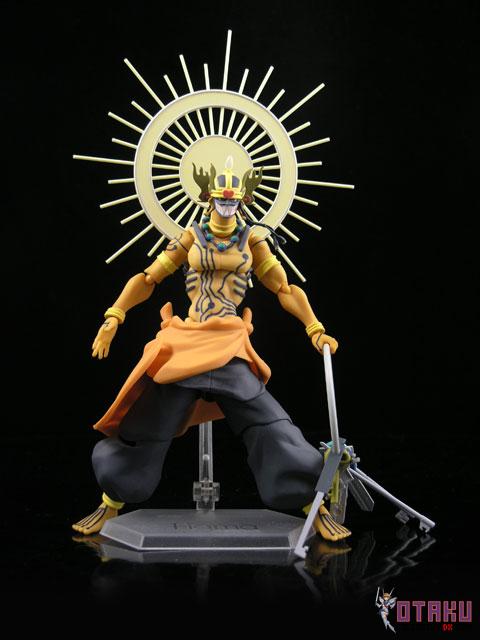 One of the more interesting accessories is the key ring. This ring features several individual keys that you have to add to the ring. They look really great and an appropriate holding hand is included. 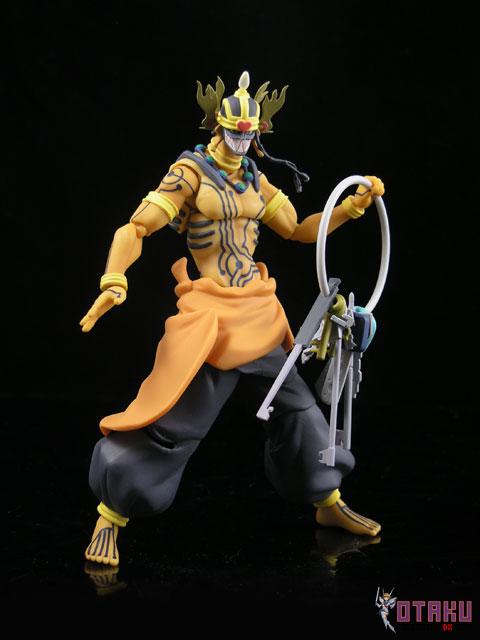 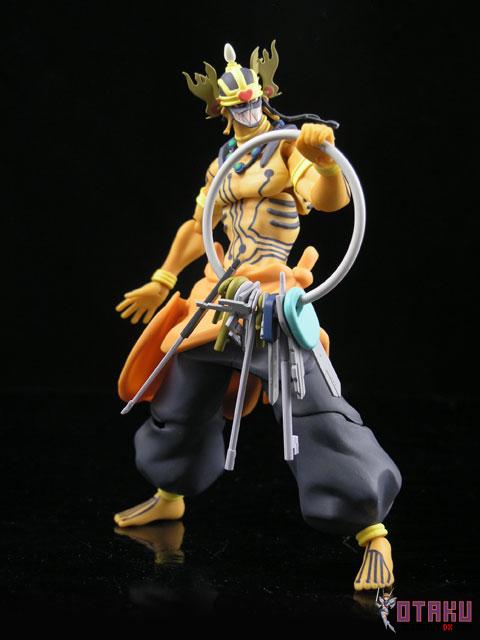 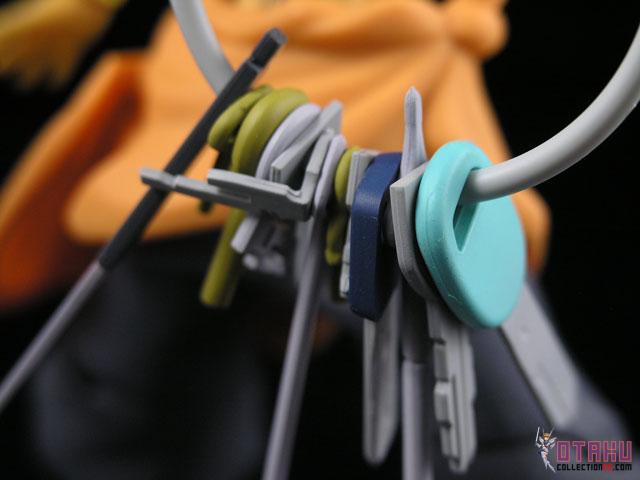 Love Machine’s Halberd is also included. This long staff includes two removable tips that allow you to slide the handle through the hands first. The halberd is HUGE and can be held with one or both hands. 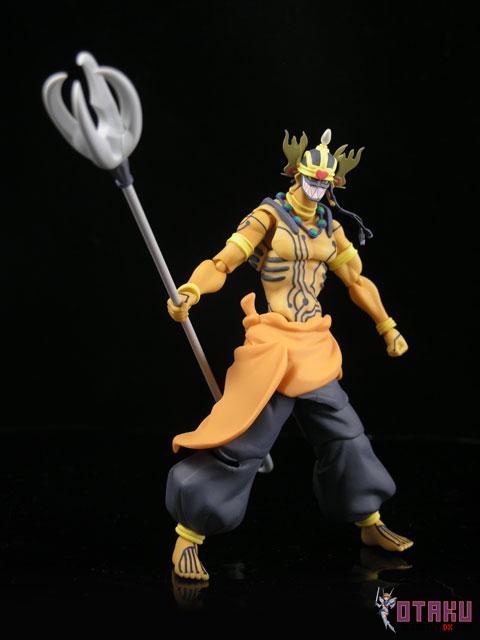 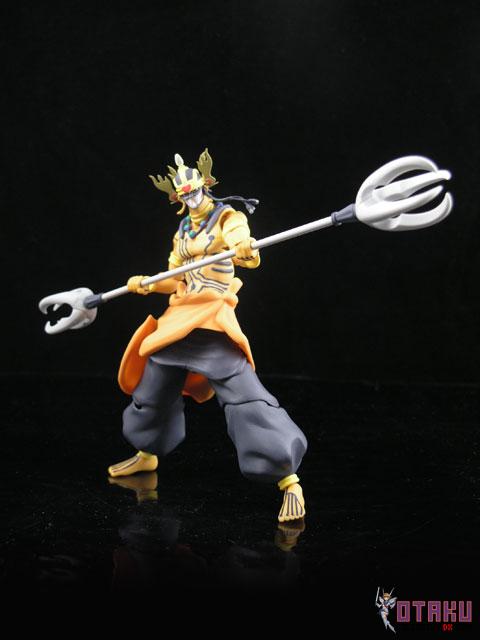 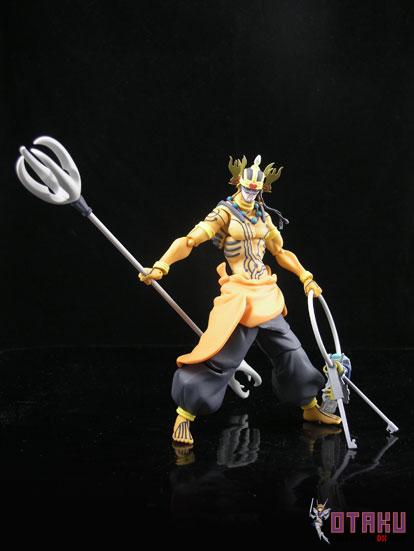 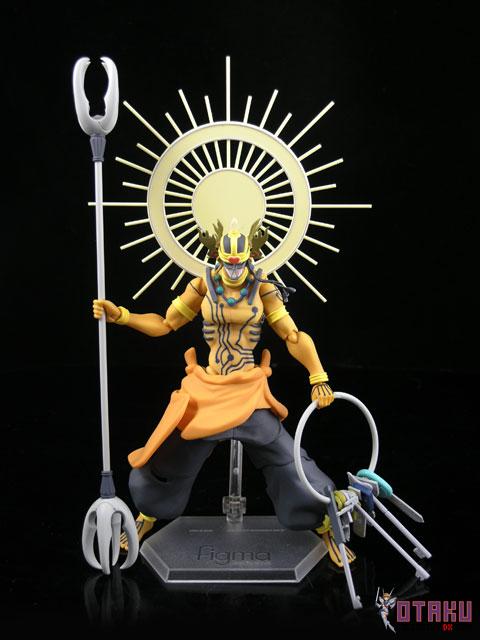 My favorite accessory of the lot is Kenji’s squirrel avatar – who is depicted being punched in the face by Love Machine! 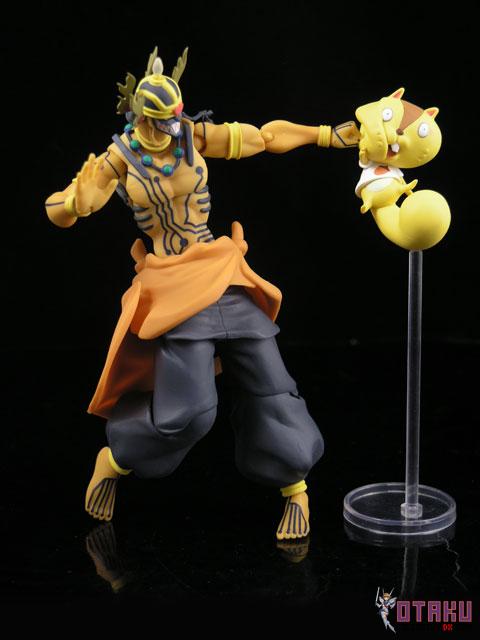 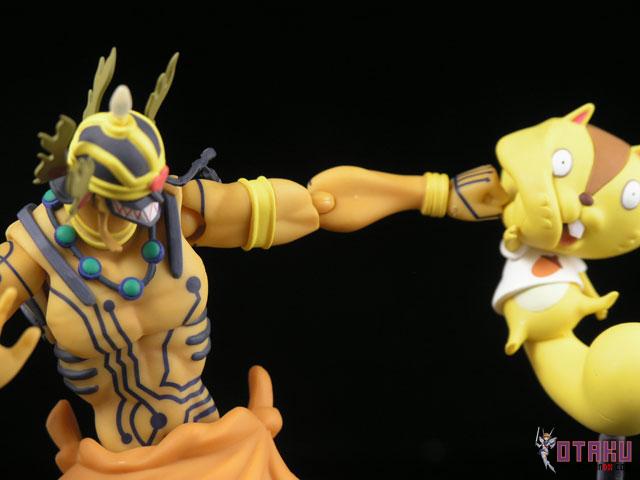 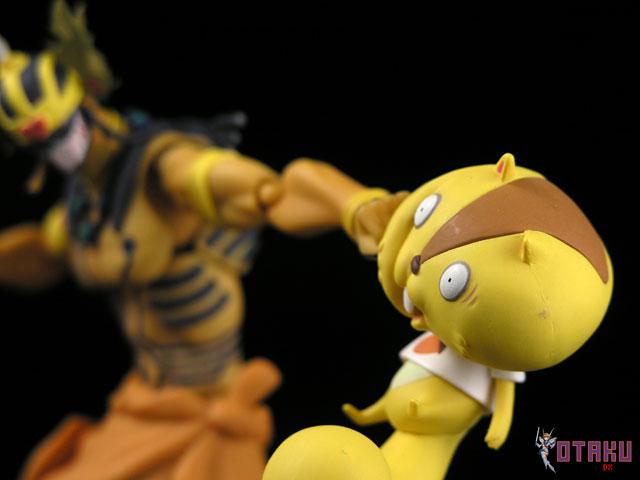 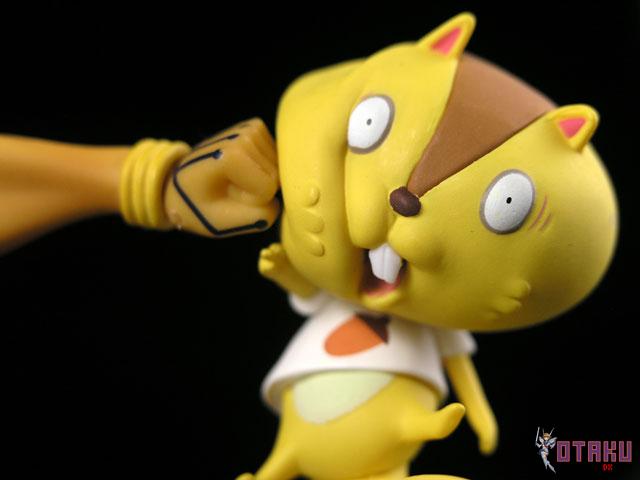 Your standard figma stand is included, as well as the accessory bag and the holder for the fists.

A great release and a must-have for Summer Wars fans!