TRON was one of the defining movies of my childhood. To say I am just a little excited about the sequel is an understatement. So when new toys hit the stores (months ahead of the movie) you can be damn sure I was there to buy them. So what if I had to pay inflated Disney Store pricing? I got them before street date, and that made me happy. Of course that street date has passed and they are everywhere now, but that is beside the point.

The point is I have new TRON toys, and there is a new TRON movie coming  out, and that makes me happy.

The first toy from TRON LEGACY that I am going to review is Kevin Flynn’s Lightcycle. Flynn was one of the main characters from the first movie, who now has aged and lives in the digital world. Flynn’s Light Cycle closely resembles the classic design from the original movies, with a few alterations.

The toy comes in an impressive box, with a clear window with a “Try-Me” feature. Pull out the tab and press the button and lights on the vehicle are activated. 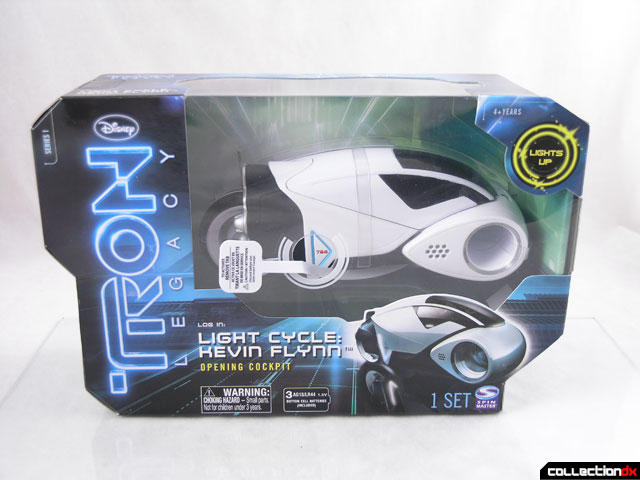 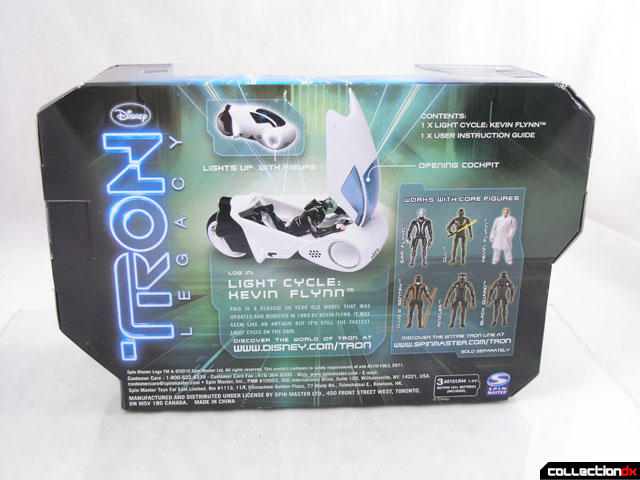 A few things strike you when you remove the vehicle from the packaging. First off – there’s a lot of packaging for a relatively small toy. Second is that it’s very light. Those of you who own the original TOMY lightcycles know that they are sturdy and heavy due to the metal insides of the rear wheel. This toy is all plastic and feels cheap compared to the original. 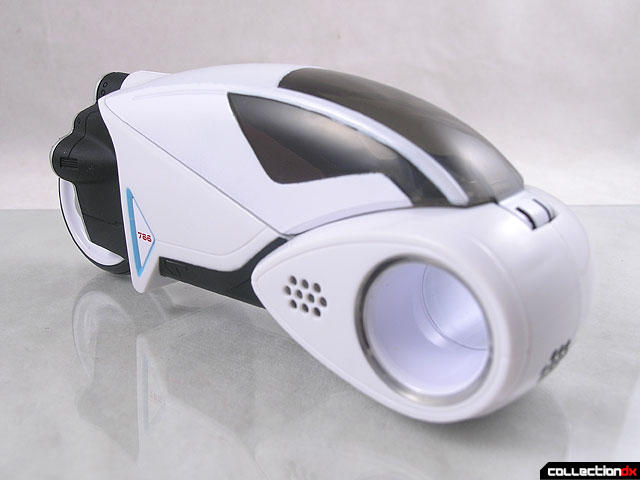 However, the fit and finish are nice, it’s actually not cheaply made, it’s quite sturdy. Details are sparse but clean. 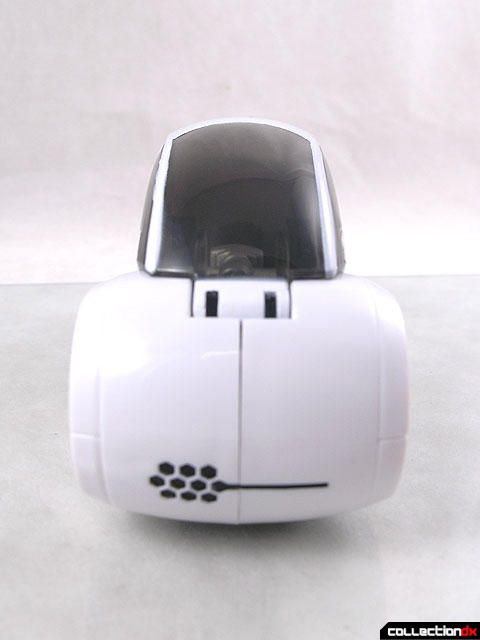 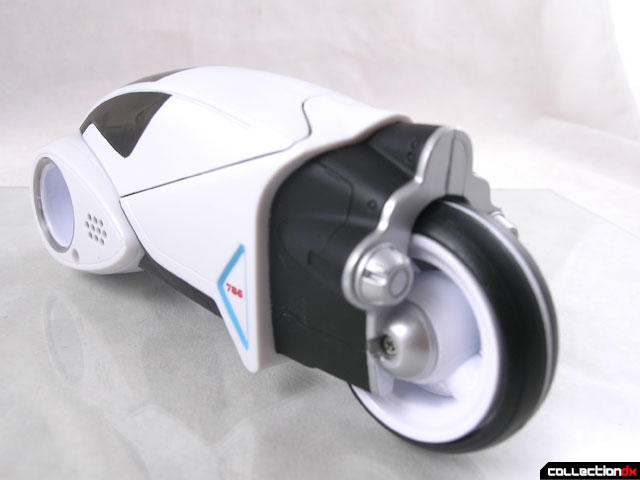 The toy has some play value. Press the triangle on the side to activate lights (but no sound). A switch at the bottom goes from try me to OFF to regular operation. 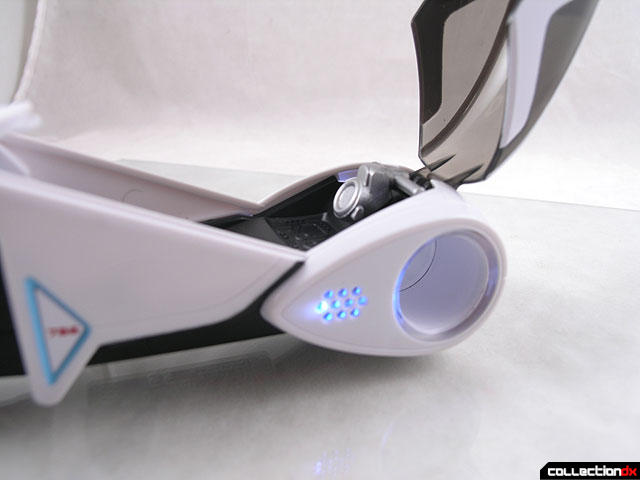 Open the cockpit to reveal a sparse interior, with a button in the middle. If you insert a figure (not included) it depresses the button and activates a different light sequence. 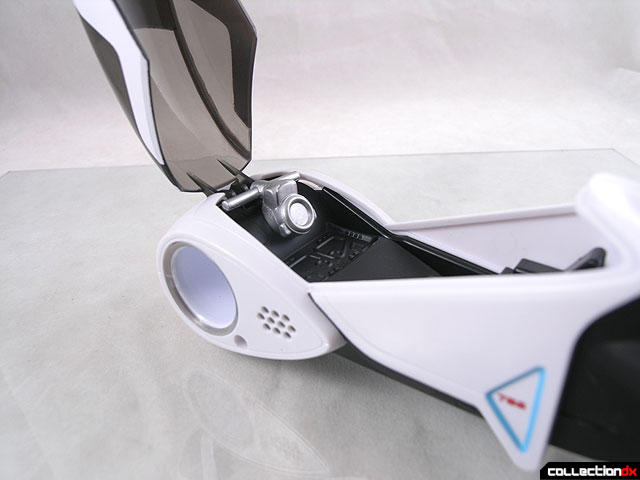 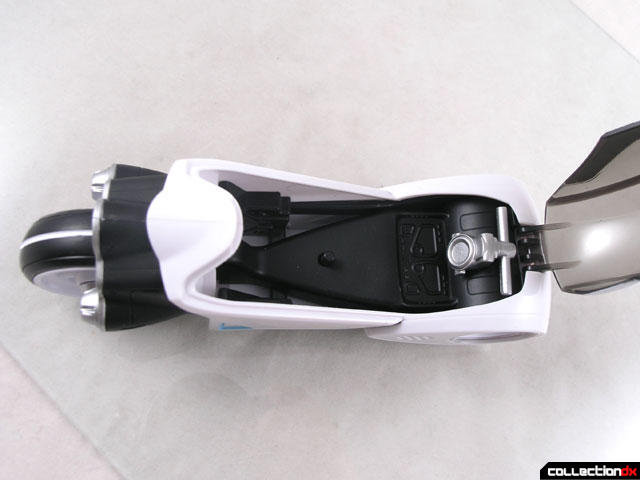 Of course it rolls, but there is no rip-cord action like the old ones did. 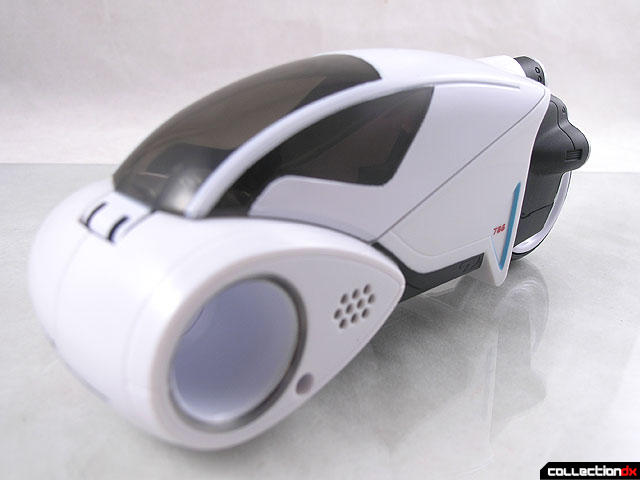 I like the fact that it is essentially in-scale with the old TOMY Lightcycles. 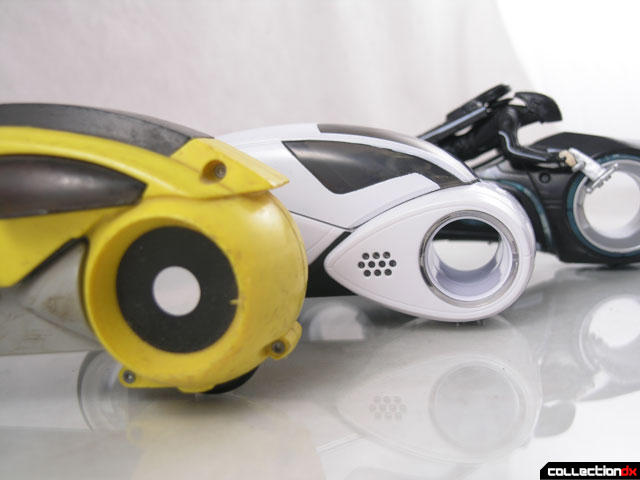 I dig this toy for what it is, but I am disappointed by the missed opportunities. No rip cord? No sounds? No figure?

Perhaps there will be a deluxe version in the future.

Toy looks like a bummer, but the overall design is a nice update/cleaned version of the classic design; nothing too radical to irritate the fanboy in me.

I wonder if they'll make a large-scale toy of the new Recognizer (or even the old one)...?

I find this toy disappointing. While its a nice looking object, it's not much fun. While it's priced as a deluxe toy, nothing about it is special. I can't get my Sam figure to fit properly inside, but maybe that's because the figure has two left arms.

Do yourself a favor and spend the money on either an old Tomy model or one of the NECA reproductions. The fact that the old ones were indestructible and are just as fun now as then is worth twice what this is.