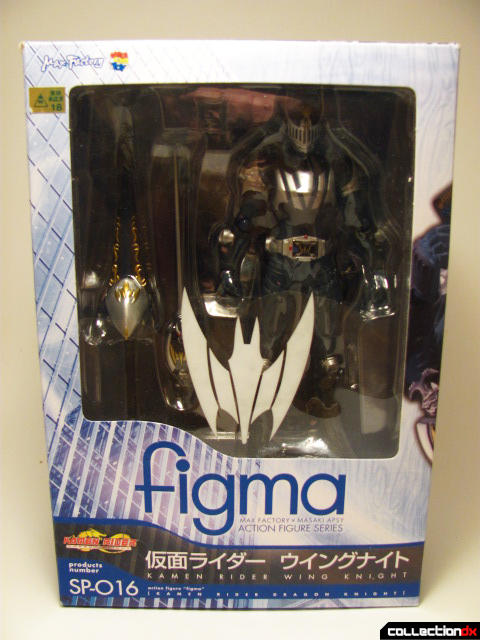 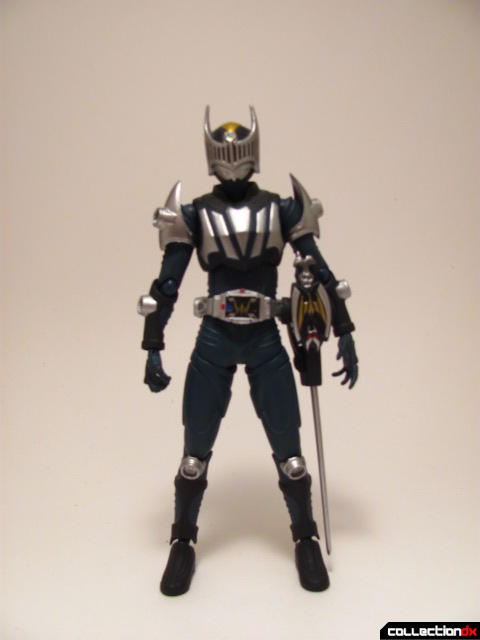 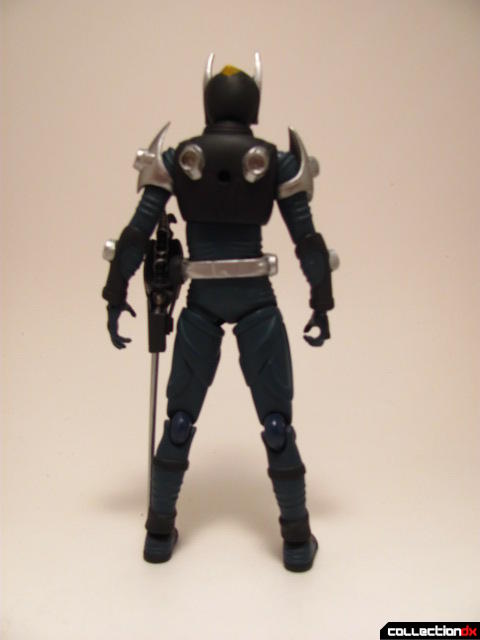 Len is your average run-of-the-mill biker loner who transforms into a rubber-powered super hero who fights monsters and jumps into mirrors. So, you know, the normal stuff. He made a contract with Black Wing, a cool Mirror Beast who just happens to be a huge bat. As the show progresses, we get to see the loving side of his personality, which is pretty much the same as his normal personality, except slightly less scornful. 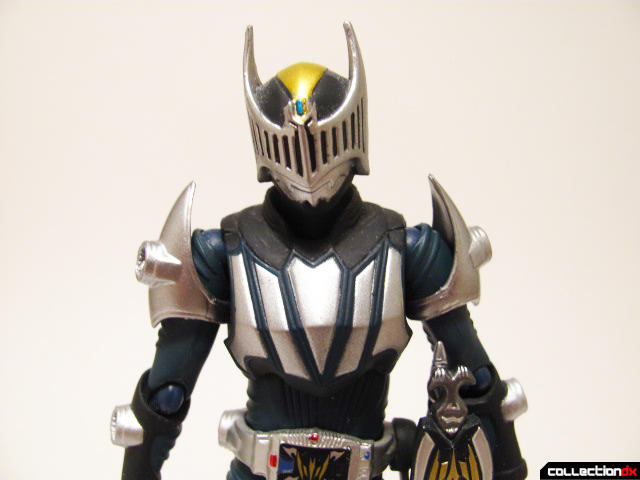 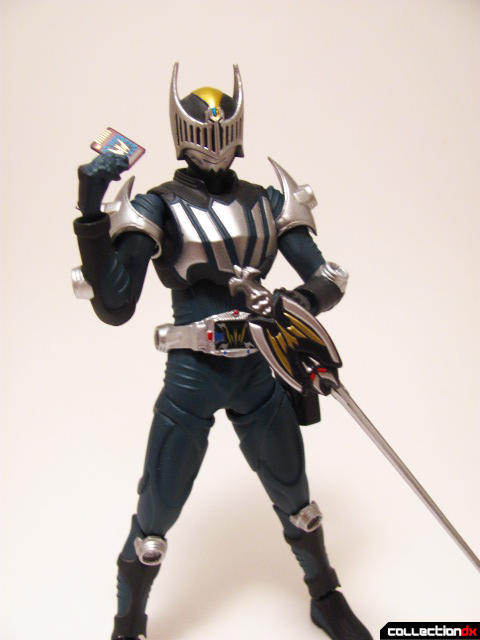 The sculpt of the figure looks great. The colors look wonderful, and every detail seems to be in order. The blue is a nice matte dark blue, and the silver adds a nice touch as well. I’m a huge fan of the suit design of Kamen Rider Knight/ Wing Knight, so I was pleasantly surprised to find it looking so great. Plus, the plastic is really rubbery, and it makes the figure feel really nice in your hands. Or feet, whatever. 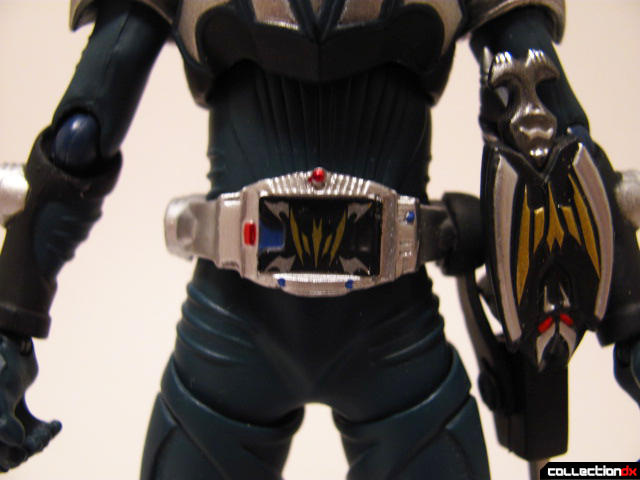 The belt itself looks really nice. They managed to cram a lot of detail into such a small space. 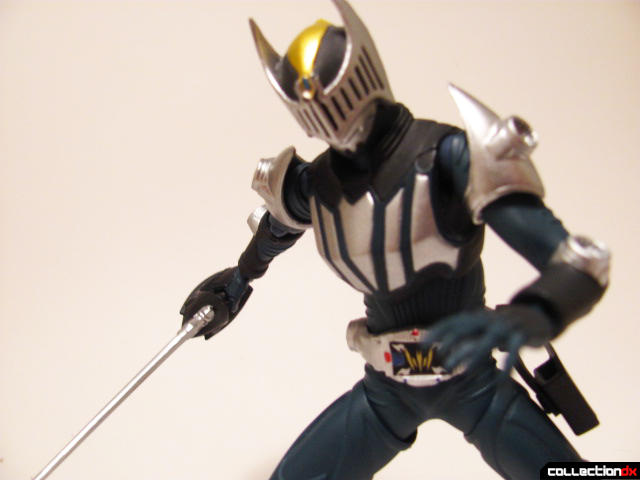 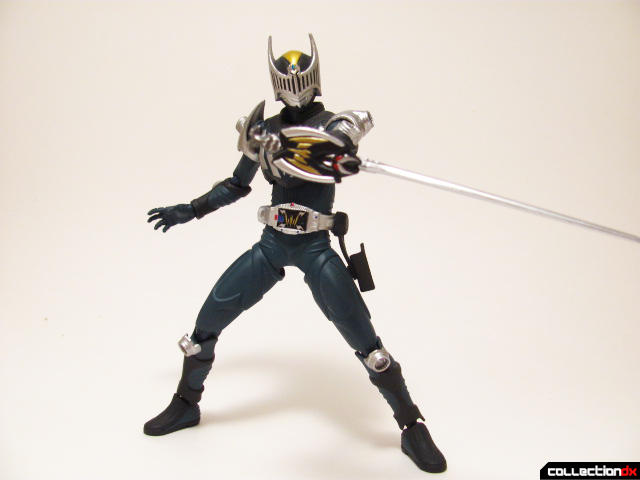 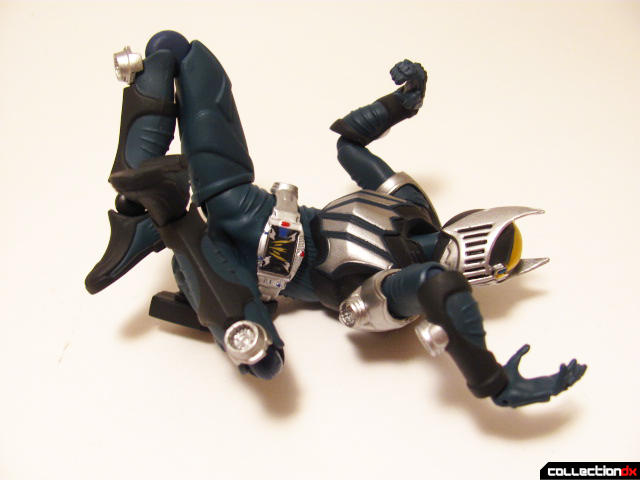 Wing Knight has some really nice articulation. He has a ball-jointed neck, double-swivelling shoulders, bicep swivels (more on that later), single-jointed elbows, double-swiveling wrists, ball-jointed chest and waist, ball-jointed hips on a swivel, thigh swivels, triple-swiveling ankles, and a single joint in the knees that protrudes out to give the motion of a double-jointed knee. The knees look odd, but for some reason, I kind of like it. It may be because the swivel feels so nice. 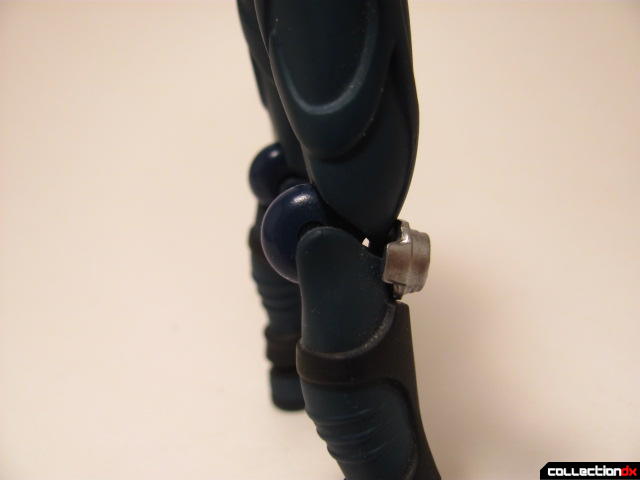 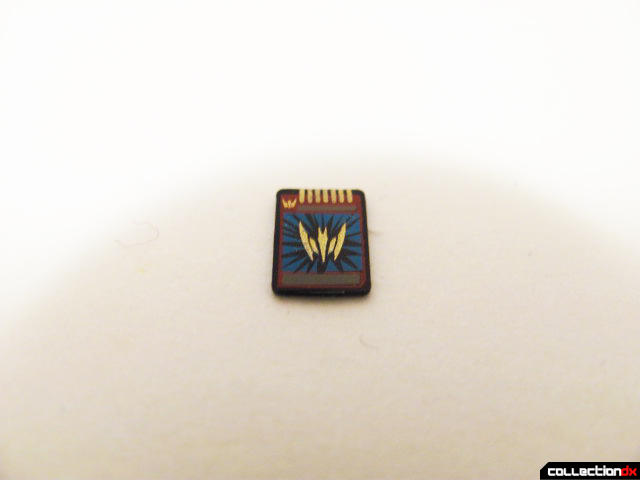 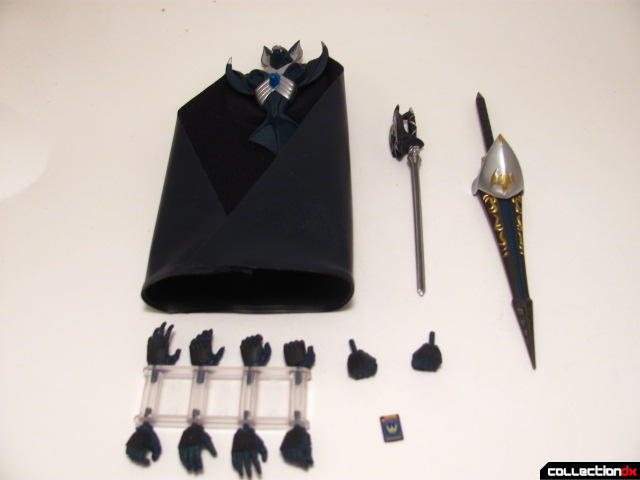 Wing Knight also comes with a decent amount of accessories. He comes with 5 pairs of hands, including fists, calm hands, splayed hands, holding-things hands, a hand for holding advent cards, and a hand for gripping the Drag Visor (because, you know, a boy can dream). He also comes with Black Wing in his cape form, his Black Visor (the rapier), his Sword Vent (the lance), and an Advent Card. He even comes with his own stand and a baggie to hold everything. His cape is made of a cloth-like leathery material, and there is a wire in the bottom so you can articulate it. I can’t think of anything else they could’ve crammed into this package. 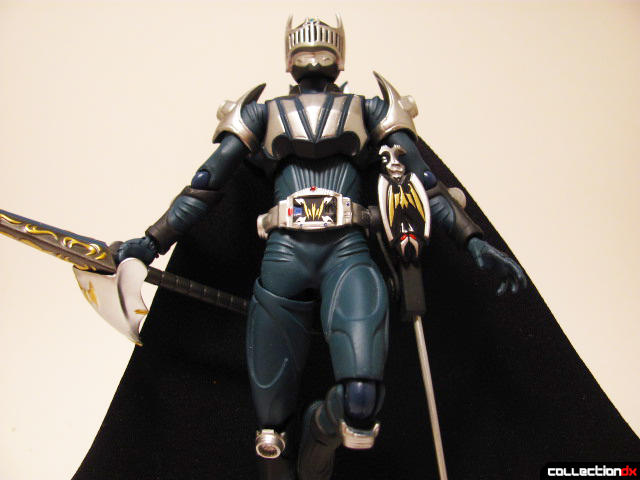 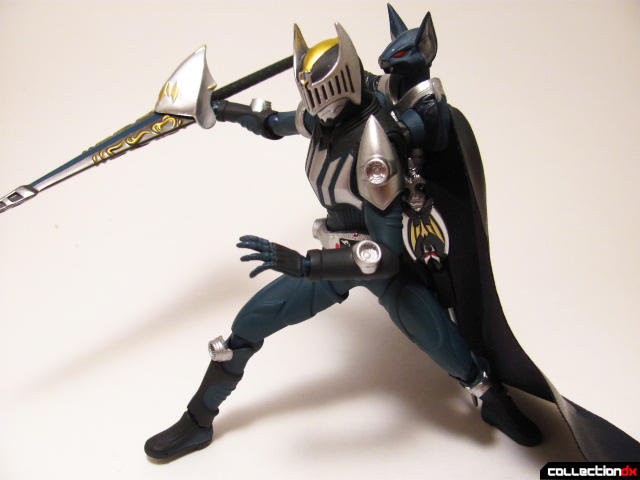 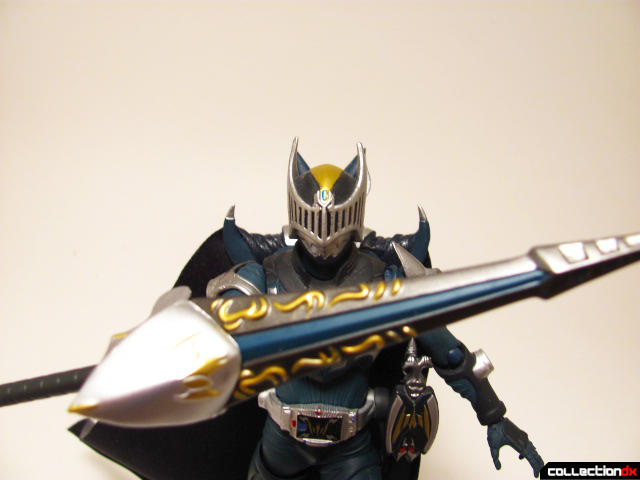 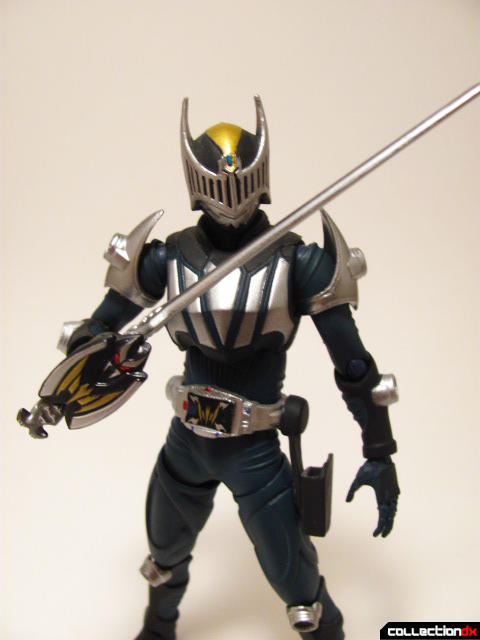 Alright, I’ve laid out all the great things about this toy, but it’s time to crush your dreams to bits. As soon as I started fiddling around with this guy, his arms fell apart. At first, I thought it was just a onetime problem, until it started happening whenever I touched it. The bicep swivels aren’t even remotely useable because the second you touch the arms they fall into about 3 pieces which you have to Tetris together. Overlooking the fact that I just used Tetris as a verb, I found this to be a complete deal breaker. It made posing him a huge pain. I suppose it would be ok if you posed him once and put him on display, but I’m the kind of person who has to constantly play around with his toys at his desk. 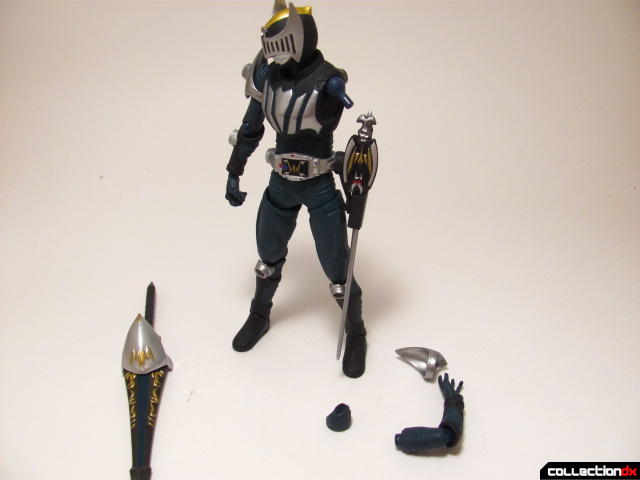 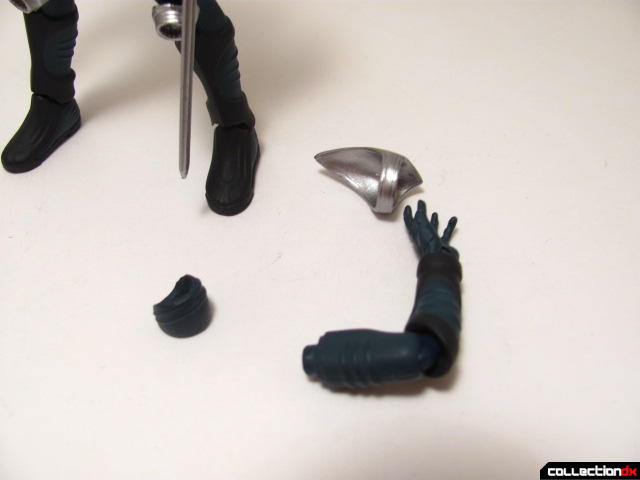 Figma Kamen Rider Wing Knight had a lot of promise, and admittedly looks great, but I can’t recommend him to anyone unless they don’t want to pose him at all. Even if you’re a huge fan of the character or suit design, there are better options out there. 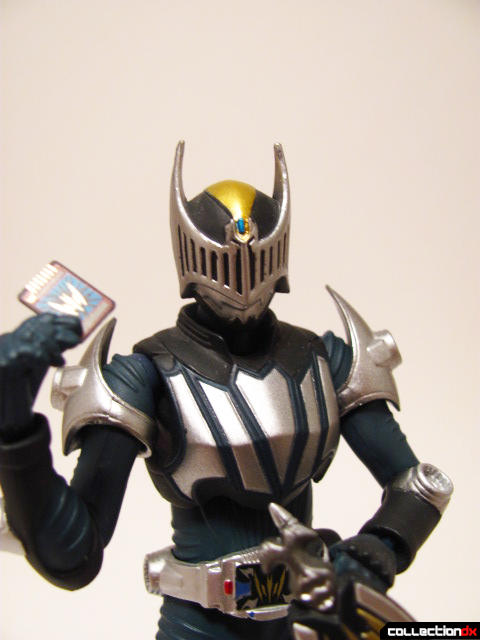 4 comments posted
Seems you got a bit of a duck?

Shame to hear about the QC problems, but as someone who owns about 70% of the figma Rider line Knight is by far the most finicky, and on mine the arms only ever fall apart when I try for a really strenuous pose. The rest of the line is pretty solid the whole way through, fortunately.

Since the arms are keyed not to have a bicep swivel, I guess you could also use some glue or nail polish to stiffen the joint a bit, but eh.

He's a pretty cool figma though, and I do like the cape. Nothing better than giving it to Koyomi Araragi~

That was also my experience. I have a couple more of the Figma's and they are great. This was the first one I got, and it almost ruined the line for me. Luckily, he's the only bad egg that I could find.

I gave the cape to Kamen Rider Fourze, and it looks awesome.

The only true better option is for sh figuarts version which is much better then this but currently more expensive.

I for one did not have any of the QC issues you had and others seemed to exp. with the arms. I guess i got a good one lol.

I envy you so much right now! I tried so hard to love this toy, because I'm a huge fan of both source materials and the suit design. I'm happy not all of them had the errors I had. The other Figmas I have are great.