You may know Eiji Tsuburaya from his more popular creations, such as Ultraman, but did you know that about the same time Tsuburaya Productions created another legendary Japanese Kids show? Alongside Ultraman, Tsuburaya produced a show called Kaiju Booska in 1966.

Kaiju Booska began life as a pet iguana to a Japanese kid named Daisuke Tonda who liked to play mad scientist. He made some kind of food called Kuropara and fed it to the Iguana. This resulted in the reptile growing into a man-sized friendly Kaiju named Booska.

Booska and Daisuke would go off on adventures and fight off the monster of the week. The show was incredibly popular for the time, but was off the air in 1967. The show was later revived in 1999 as “Booska! Booska!”.

Revoltech Booska pays tribute to this iconic television character. Booska was a live action Tokusatsu show, so it appears as part of the Sci-Fi Revoltech line. 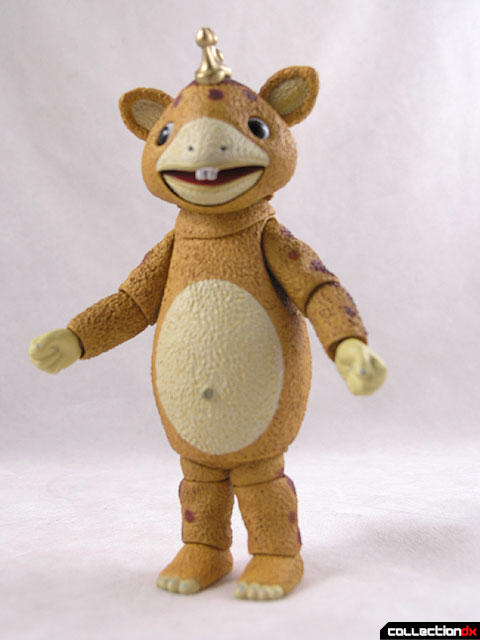 As with all Revoltech Sci-Fi, the box is stunning. A Velcro-latched cover and wrap around paper obi add a sense of prestige to the box. Muted vintage colors add to the feeling of nostalgia. Inside the Velcro flap there’s information about Booska, with photos from the show. Opposite that you can see the toy and accessories through the window box. 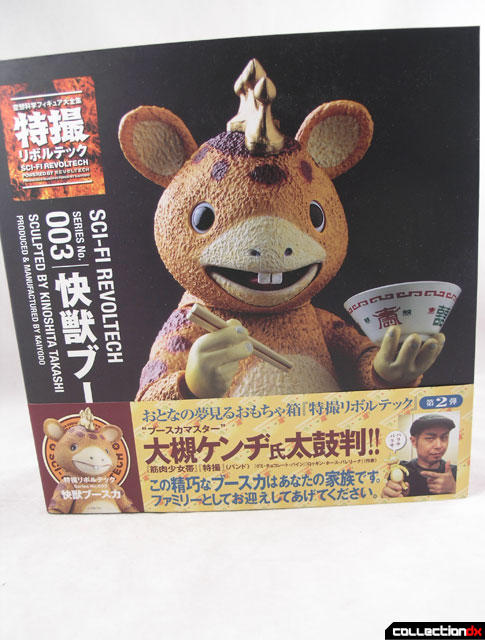 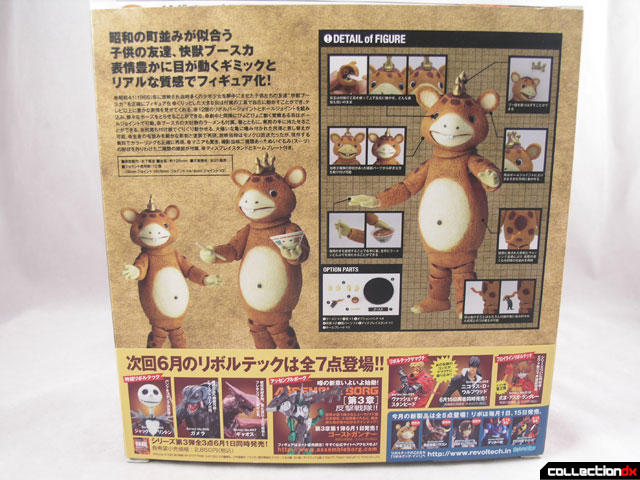 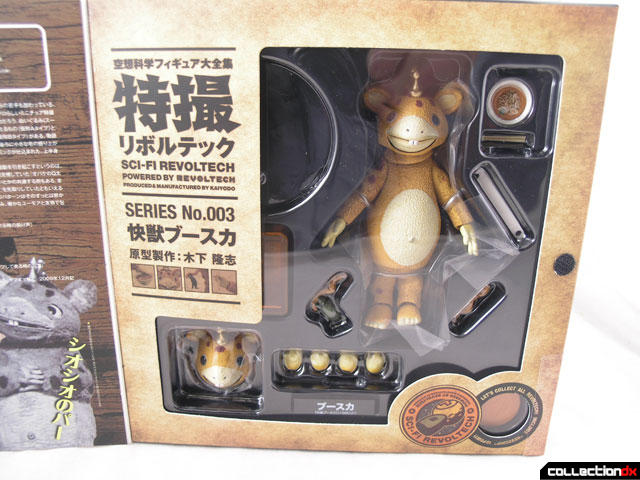 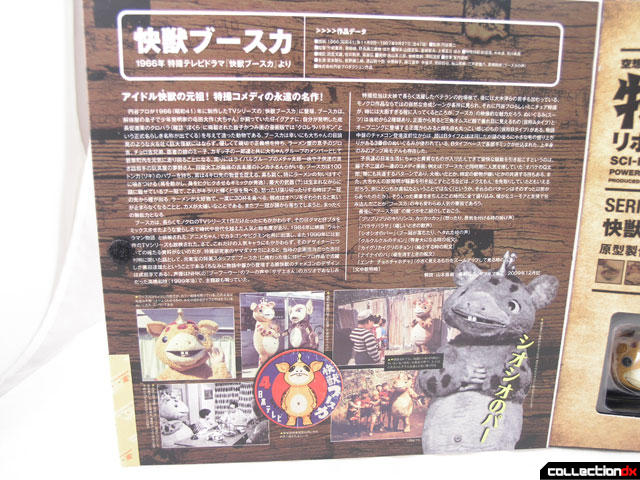 Included with the toy are a few accessories related to the character’s appearances on the show.

The bowl of ramen is there because Booska required 100 bowls of Ramen a day. Chopsticks are included, as well as a variant hand to hold the sticks. The bowl is nicely molded with great details in the soup. There’s no peg to attach the bowl to any hand, so it is easily knocked out. 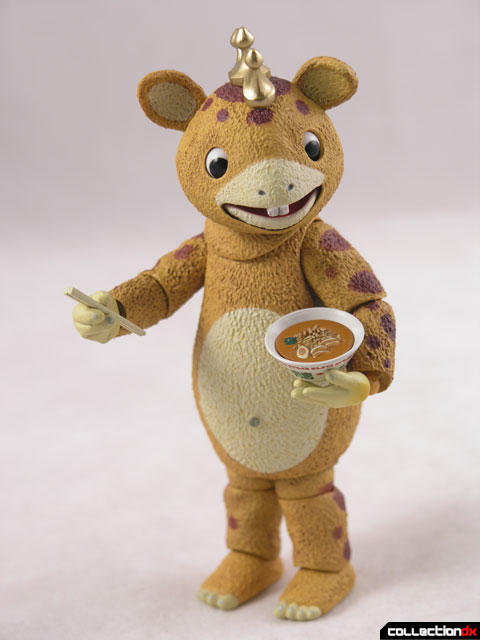 Booska includes two tails – a normal tail and another with a small turtle biting it. 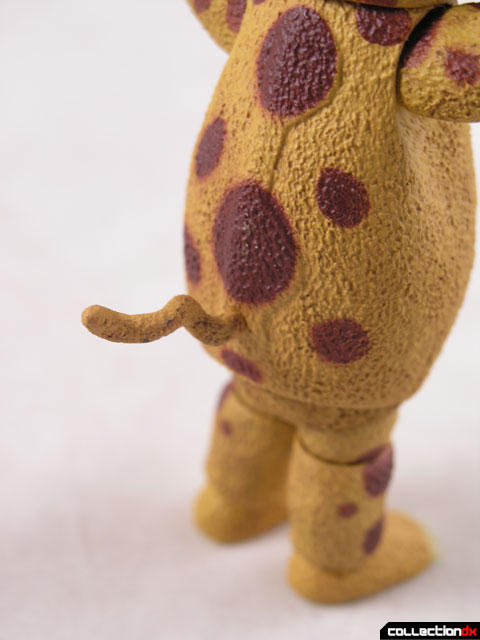 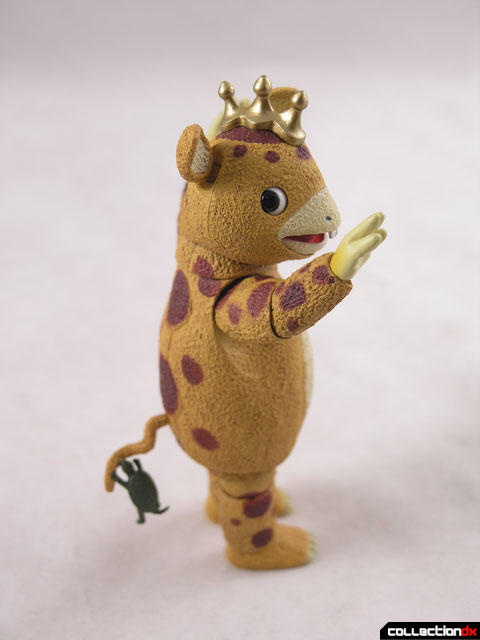 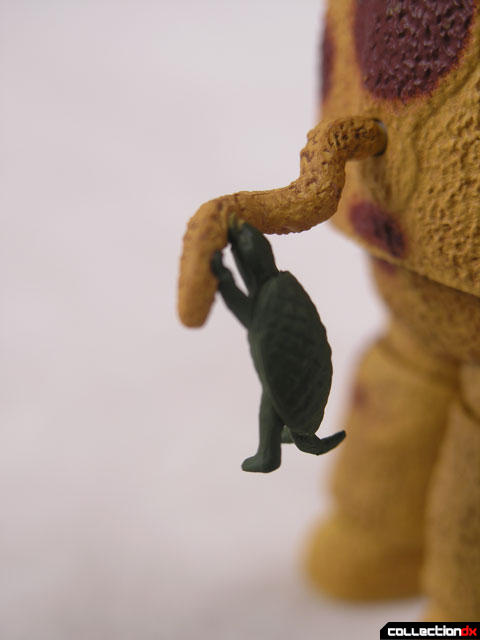 One of the best features is Booska’s head. The head features a removable crown, movable ears (with Revoltech joints), moveable eyes and opening mouth. 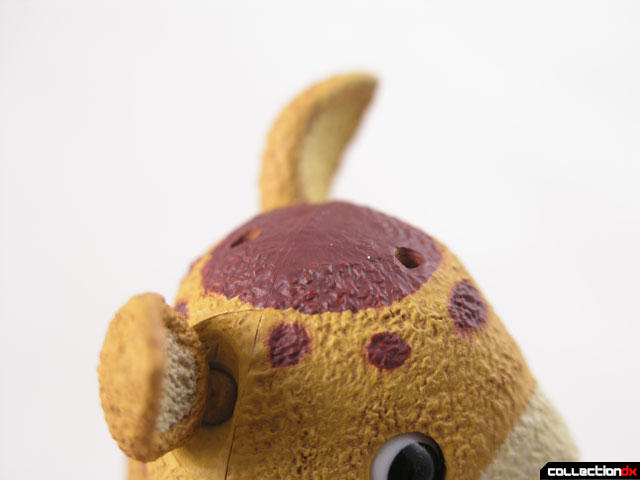 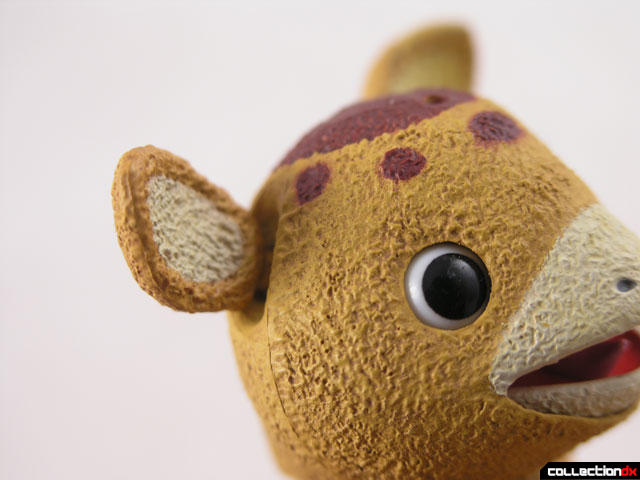 A special tool is provided to position the eye pegs inside the head. 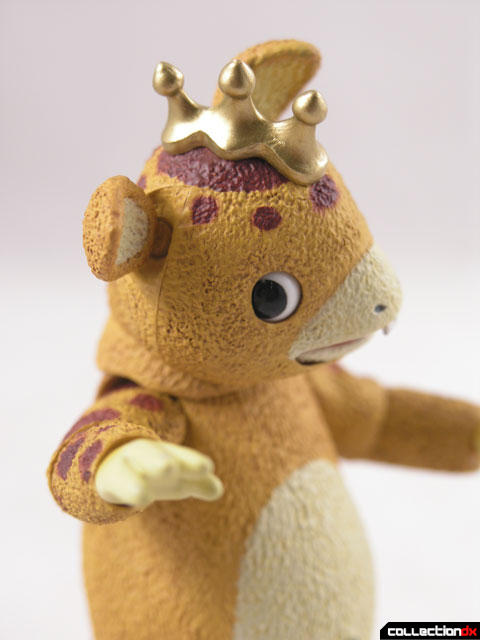 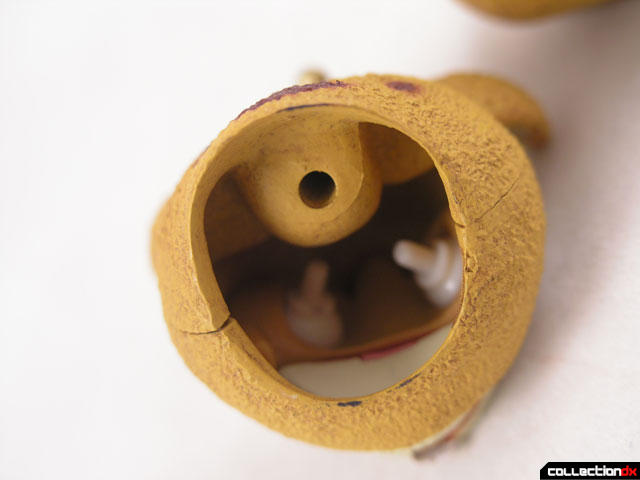 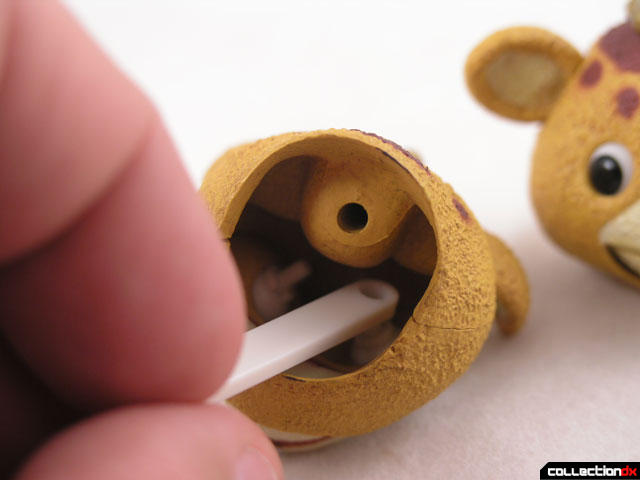 Two heads are included, and it took me a while to figure out what the differences were. One head has a slightly rounder face, and one mouth has a tongue where the other does not. My theory is that one represents the original Booska, and the other a more modern appearance. 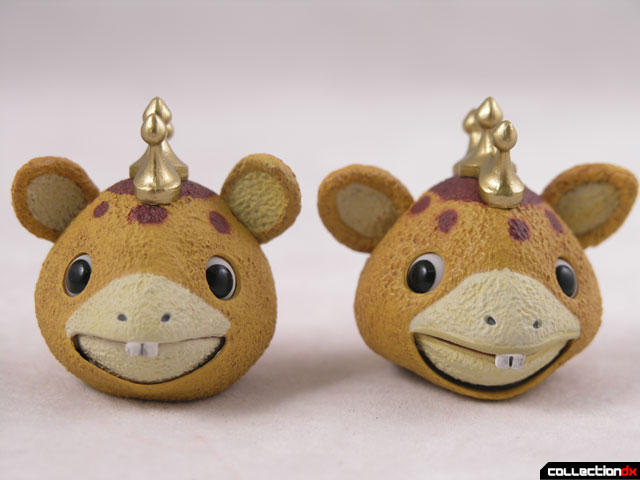 The figure itself is of high quality, but it really doesn’t do much. This is due more to the design of the character than the figure. However, I can’t say I like all the panels used to cover the joints. 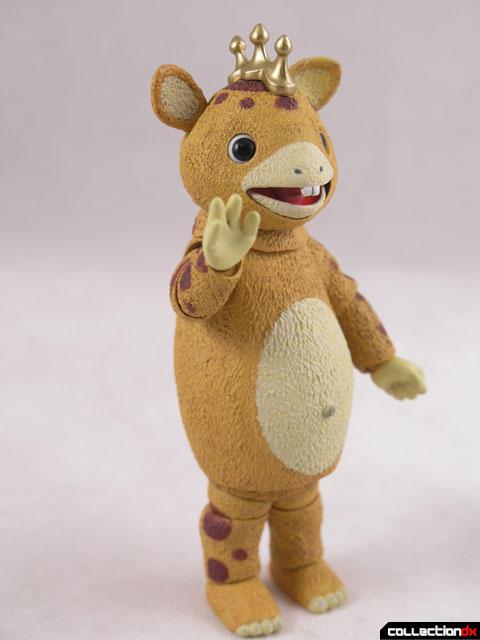 While better than exposed joints themselves, I find the panels just don’t fit with the character. Booska is supposed to be fluffy and soft – this toy is hard. They did their best with the medium, but it just doesn’t feel like Booska should. It would have been cool if they could have covered it with some kind of flocked material, giving it a fuzzy feel. I also noticed that some of the panels, specifically on the legs, were stuck together and had to be freed to get the most out of the joints. 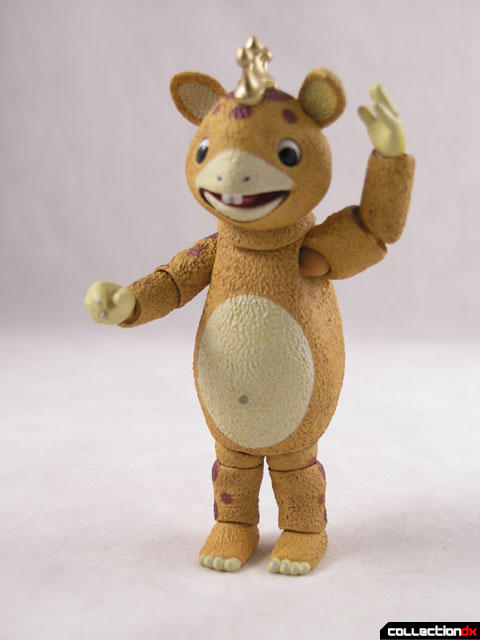 There’s no Revoltech stand with this release. In its place you get a round disc with a peg on it. You can attach Booska to the peg by holes in the feet. Also included is a name plate, and that has a hole in it as well. I presume you can put either Booska or the name plate on the peg in the stand. 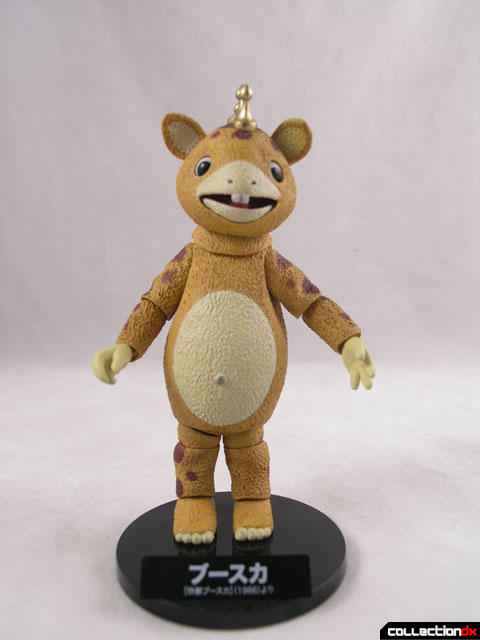 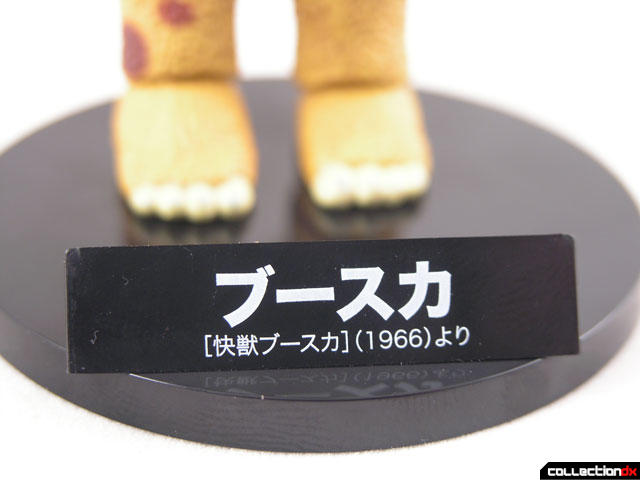 If you are a fan of Revoltech in general, you will probably like this toy, but if you are looking for a great representation of Booska for your collection, I would go find a Booska plush or soft vinyl instead. It’s a good toy for what it is, but I think I am looking for something that conveys the feel of Booska a bit more.

So Cool! I love the theme song, I think I need to find the record!

I swear after my next film I'm going to produce and direct my own Tokusatsu show!

I really need to pick this one up!

"Booska includes two tails – a normal tail and another with a small turtle biting it."

It sounds so funny when you just say it like that.

Man, that eye positioning system with the special tool is really slick.

Honestly, this seems pretty similar to the basic Bandai sofubi with the googly eyes to me, only posable. And I actually like that cheap vinyl a lot. I just wish the Revoltech was a painfully bright orange :)