Revoltech can be a mixed bag, and so much of it depends on the character. If you dig the character, you can overlook some of the flaws because of your love for the design. Such is the case with Grendizer.

Whenever a classic super robot gets made these days it's cause for celebration. Even more so when it's not a re-imagining (aka Shin Getter). Grendizer is somewhere in the middle. While the design is true to the original character, the proportions are not.

Packaging is the typical Revoltech style. Window on the front, action poses on the back. 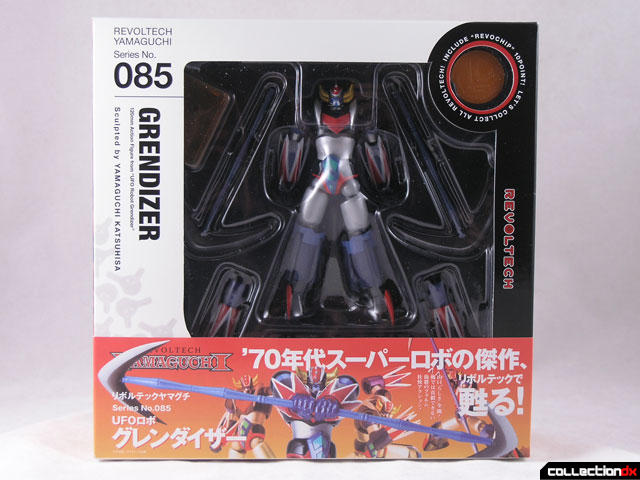 Lets get this out of the way right now. There is some serious crotch thrust. 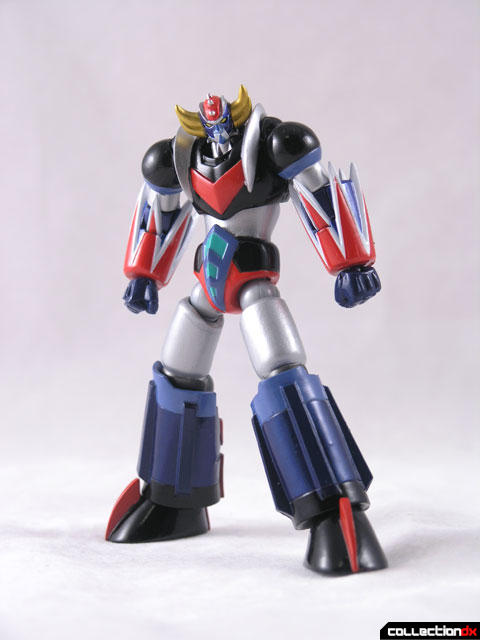 I mean, just look at that. It's right in Sanjeev's face. 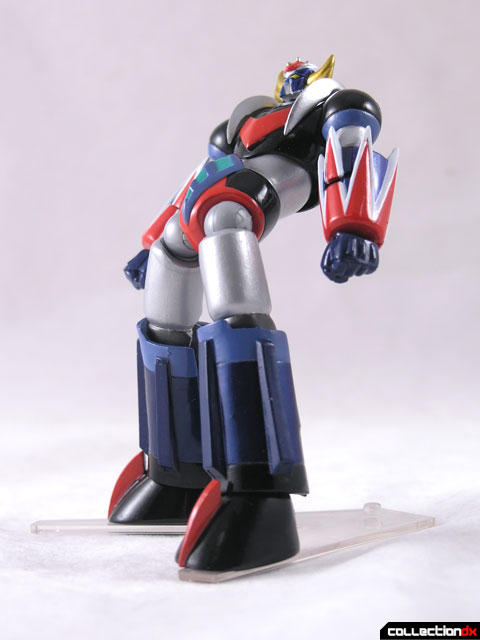 And look, it can do a neutral pose as well. That settles that argument, right? Nobody said the pose had to look good... 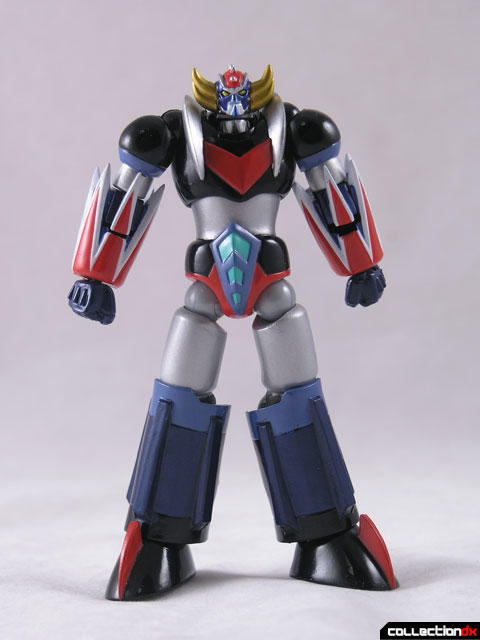 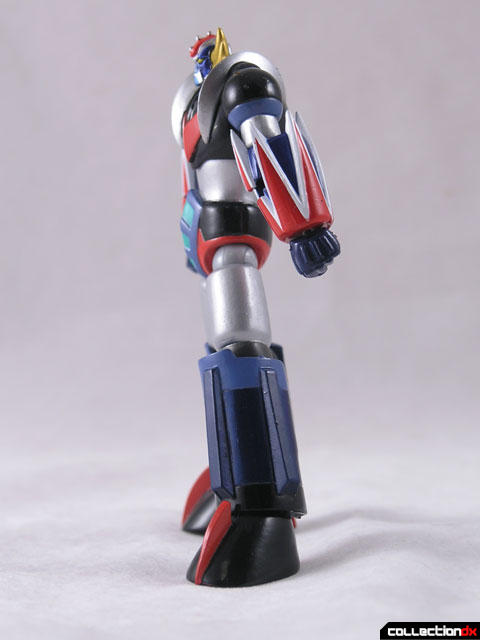 There are some interesting design choices with this figure. The head is really really small. The neck is no longer a Revoltech joint, now they are using these swivel peg systems. The head separates from the neck rather easily. It sits low on the shoulders, and you are tempted to pull it up a bit, but it will just come off if you do. 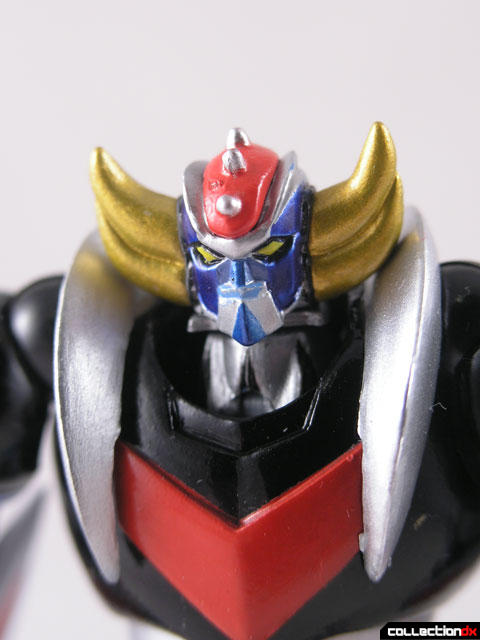 Paint detail on the head is iffy, but keep in mind, this is REALLY small.

The Revoltech shoulder joints are high up on the shoulders, making for an odd double bump. This is hidden fairly well when the Harkens are attached to the shoulders. 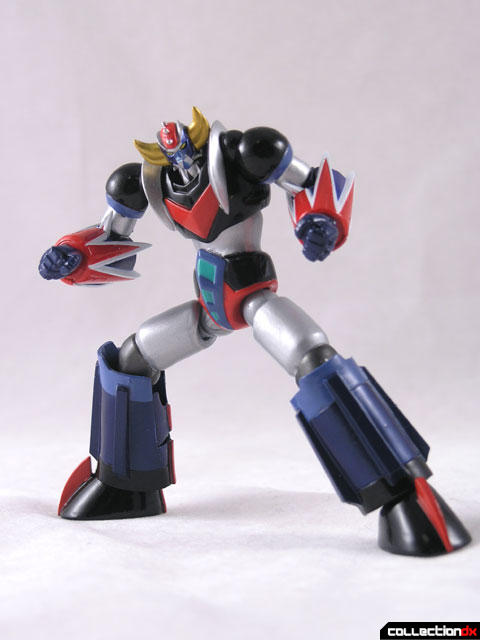 Each Harken is keyed to only specifically fit one side. These fall off rather easily, but look great when they are on. 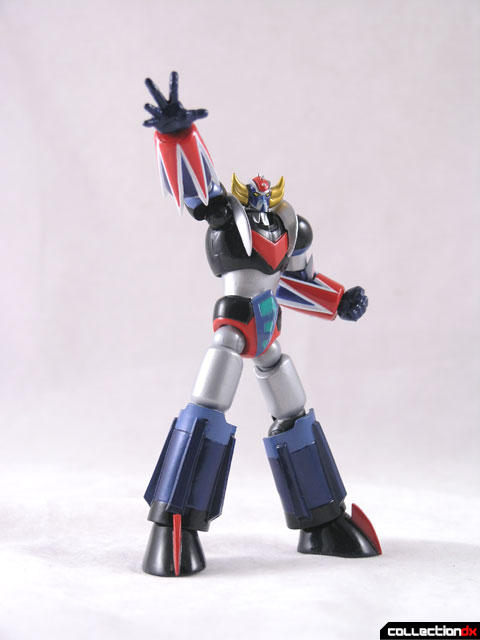 Normally, the removed Harken's become weapons. In this case, Kaiyodo provides more dynamic Harkens that can combine into the Double Harken. Variant hands are provided to hold the Harkens, including one unique opened hand. The hands are cool because they have a pivot joint at the wrist. 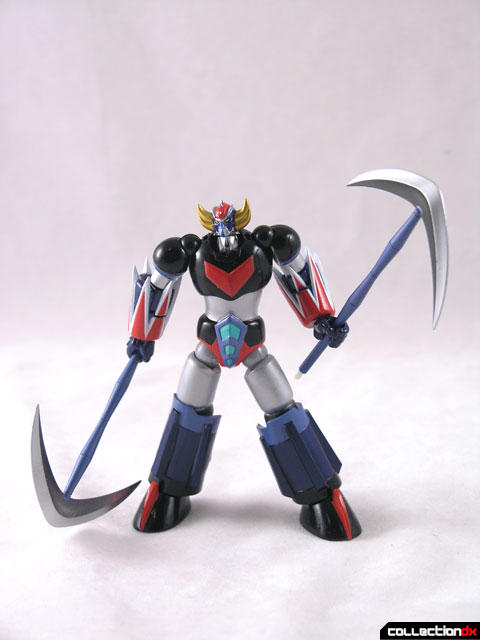 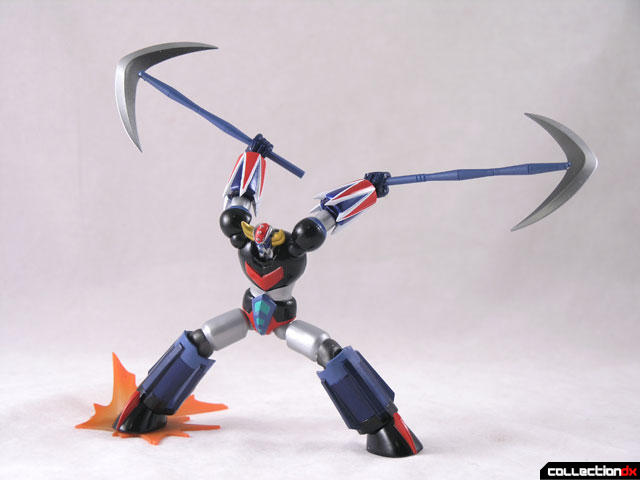 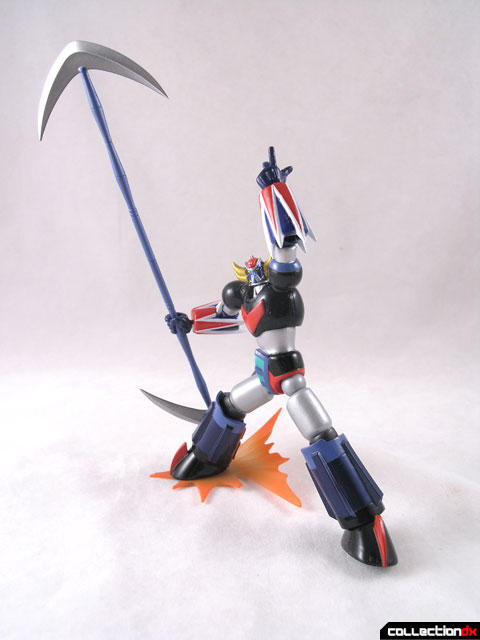 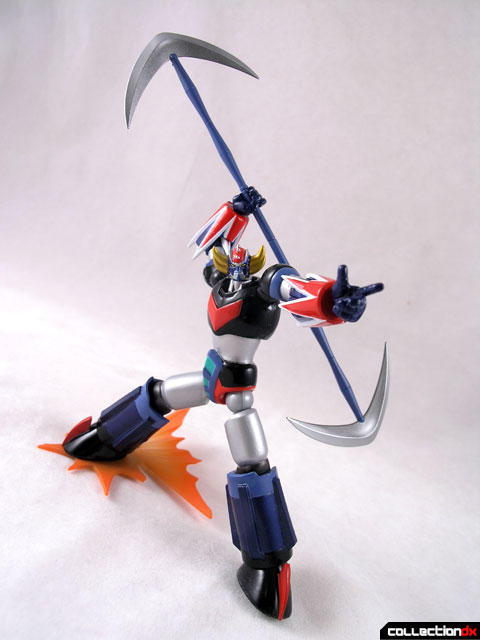 One of Grendizer's signature attacks, the Screw Crusher Punch, can be replicated by an additional set of forearms. These have the blades pointed outward. These forearms feature removable blades that allow you to insert a variant fist. While the arms aren't spring loaded, when you remove them they do have the look of being launched. 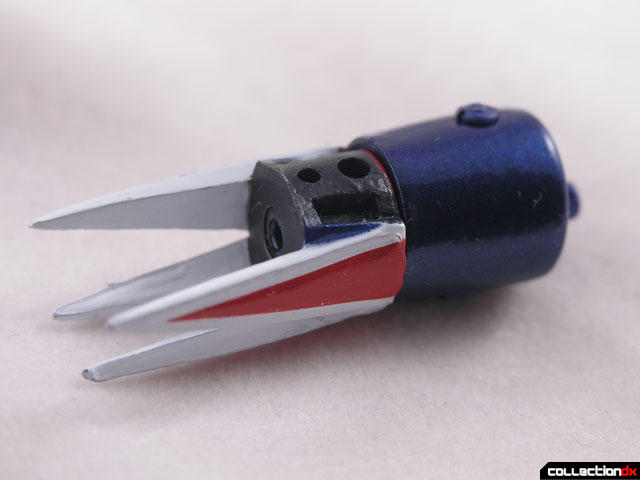 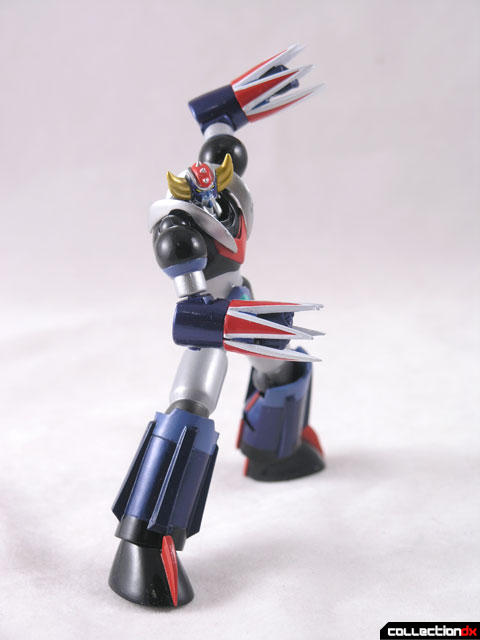 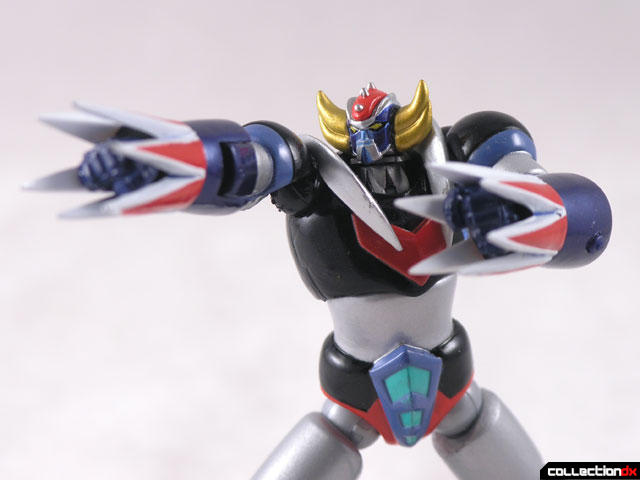 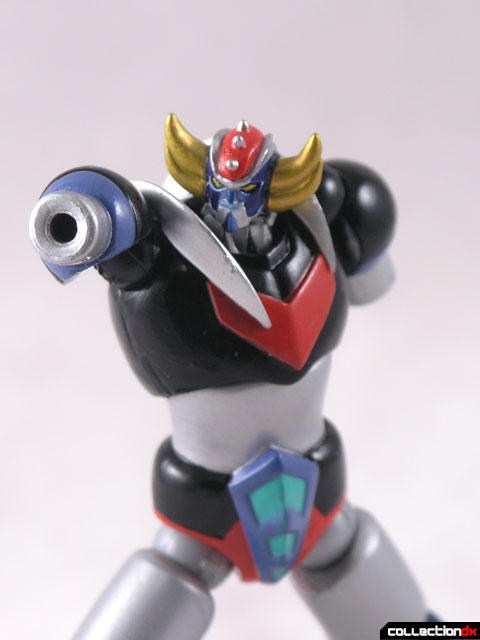 Dynamic poses abound, but you come to expect that with Revoltech. To add to that dynamism, Revoltech figures now come with an accent "blast" that can double as a stand. 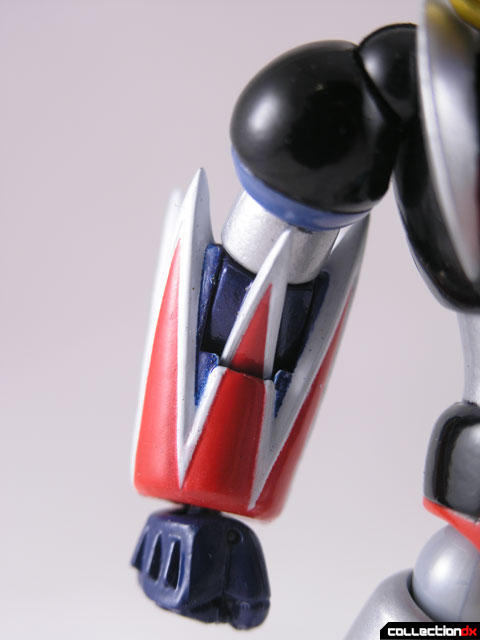 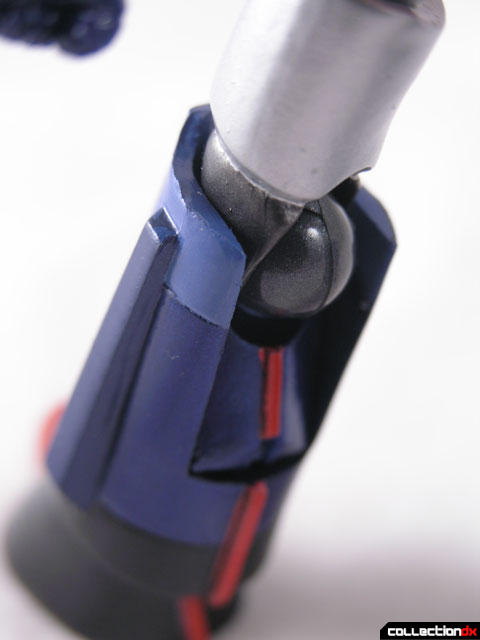 The traditional Revoltech stand is here as well, but now in clear! A simple idea whose time has come. 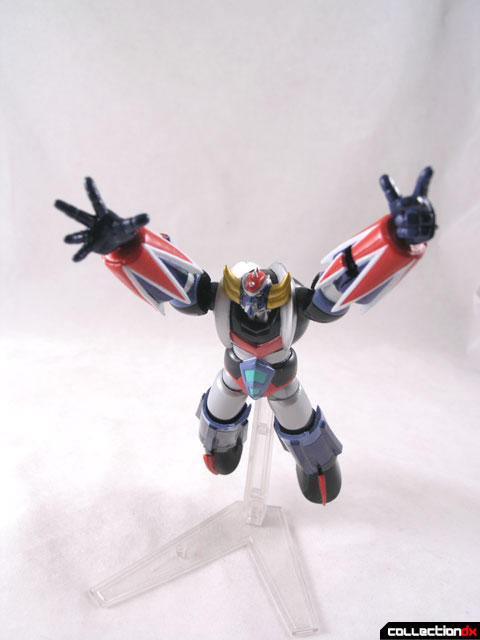 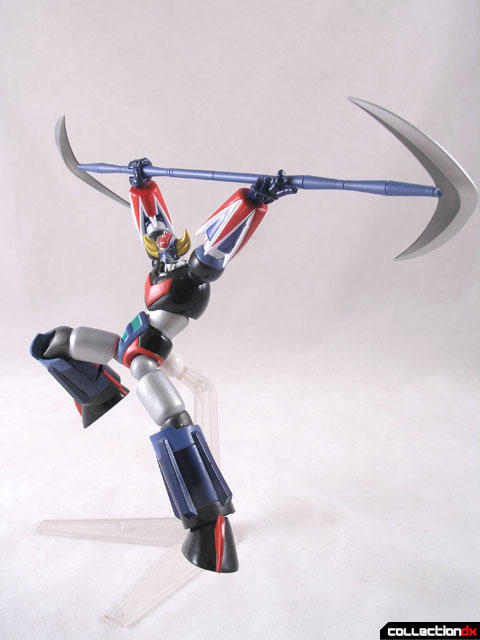 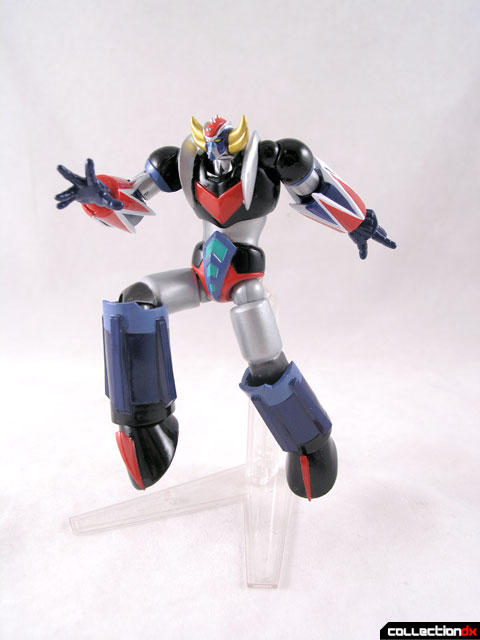 But is it good? Well, it's not bad, but old-school fans of Grendizer may scoff at the dynamic take on one of their icons. New fans can enjoy an inexpensive entry into the super robot panthenon. 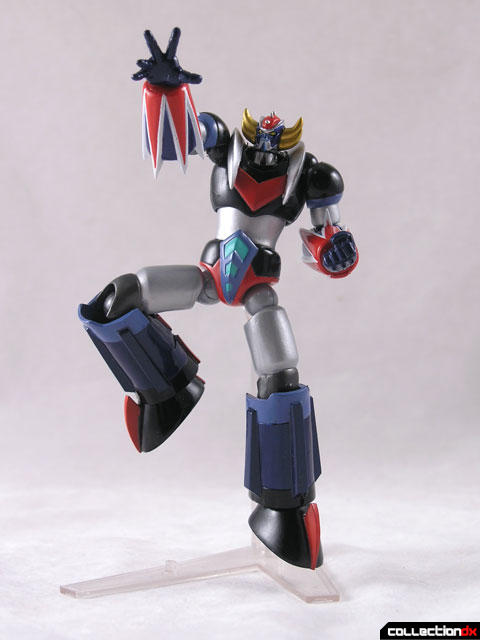 Revoltech Grendizer is available from Anime-Export.com

23 comments posted
The stands should have

The stands should have always been clear!

I know I was one of the guys defending this figure's look,but between then and now I've seen some of the other revoltechs coming down the pike,and I think I'll just wait for them,since they're characters I'm more invested in. This is a cool figure,though!

That thing is not Grendizer.

To be honest, I never really liked action figures because of the visible joints. Revoltech takes my dislike to an extreme but......they are posable.

Oh men I was waiting for reviews since the official pics looked to good, and not as good as it made me belive but still awsome
What I really miss here is the spacer2 , it would have been an awsome set, since we are getting revoltechs like lavatein that have tons of accesorioes, it wouldn't hurt that much.
I'm a huge fan of grendizer and always wanted a little robot to play , revoltech going the classic way is awsome, now give us some jeeg and I'll be happy

Kaiyodo had issued a Jeeg together with Takara in the past so it will not be a problem to issue a larger one in the Revoltech line.

Who else thinks there'll be an add-on Spazer later?

I've been thinking about ordering this guy. Still a bit on the fence, but it's nice to see a CDX review of him.

I received my Revoltech Grendizer from HobbyLink Japan five days ago but went to retreive it today. I still haven't opened the box yet but I found your review today (what a coincidence) and read it first.

Being a die-hard Grendizer fan, I would say that I'm delighted that Kaiyodo is finally issuing Revoltech action figures of classic robots.

However I am somewhat disappointed as Grendizer could have been made way better than this.

I sincerely hope we get an improved Grendizer plus Spazer. Maybe Yamato will also take up this challenge and issue a Grendizer in their GN-U DOU range of action models.

Finally, I am still of the opinion that only High Dream is taking Grendizer seriously as is shown by its recent releases.

This thing is damn ugly...Not my grendizer...

I'm almost afraid to offer my opinion now for fear that people will think I'm just being anti-crotch thrust or just an old grump again, but man, that has got to be the worst non-bootleg Grendizer I have ever seen in my whole life. Never mind how it does or does not pose, it's just plain ugly, as maltagokin said. What is up with Japan and their tiny heads?

What's with the football shoulders and no neck? Hideous.

Shoulder joints almost on the neck are FUGGLY! Biceps are too short. Head is tiny. Other than that it looks good...

I laughed hard at the "neutral pose" photo. Actually, there's quite a bit about this figure that makes me laugh...

I understand why they are the way they are, but the extra 'hump' caused by the shoulder RT joints is turning me off a surprising amount. Everything else looks great, and the figure looks fantastic in poses that take advantage of those shoulders, but they are actually pretty goofy looking. Maybe I need a Metaltech...

I like Revoltech figures, but I don't think that this figure looks good.

It seems to me that one of the bigger problems is that they copped out in the design; they didn't make the proportions crazy enough. Compare this to, say, the Revoltech Giant Robo.

Revoltech, for the price of two & a half you can buy a SOC without the a crappy paint job and with diecast parts. Lets do a poll to keep or dismiss Revoltech toys? Seriously, I want to like Revoltech but I feel it's such a ripe off... I own Revoltech DieBuster & Gaiking but am not very impressed for the price, eventually there will be or already is a SOC toy for these.

That's a big leap of logic there... you really can't fairly compare a cheap toy to an expensive one, and that's the point here. Revoltechs are designed for a certain customer... SOCs are designed for a very different customer. One side hating on the other doesn't accomplish anything, and yet it happens in EVERY Revoltech thread.

I look at it as "I could buy two SOC or five Revoltech", and with five Revoltech I can make a neat battle scene, whereas with two SOC I can just have them kind of stand there.

He has a small head to indicate he's a giant robot,it's forced perspective.

In my honest opinion, sometimes I think that Grendizer, along with Tetsujin, Astro Boy and Mazinger has been abused too much by toy producers over the years. Actually the abuse is on collectors like me who can't resist buying anything which 'looks like' their favorite robot. But this is hideous... He looks like he slept badly and woke up with morning glory and a bad neck ache... And his wife's blabbering before sleeping made his head shrink... This must take the Oscar for the ugliest toy so far in 2010. I still can't believe Revoltech's worst offering is Grendizer himself, maybe the most aristocratic of Nagai Robots.

I am one huge Grendizer fanatic, like most southern europeans, and will probably end up getting it anyway, just for completeness sake... But then again I'll think i wasted my money after getting it... I understand its a cheap toy, but cheap for cheap i'd go for the Marmit/High Dream Mini Metal one if I was strapped for cash. The paint job on the mini metal is nice and the proportions are well balanced at least. And if you buy a big magnifying glass and have a bit of fantasy (or grass) left, you can almost make yourself believe you have the Daigokin...In all honesty, apart from the vintage stuff by popy, the only modern grendizers I think are worth buying are the ultra expensive Daigokin, the moderate SOC's and yes, the cheap Minimetal...But not this ugly poser...

I am so happy to hear all of you hating on this. I will now wait for the lack of orders = serious price drop. Then I'll get mine! THANKS!

I think he looks pretty good.

I'm in the minority, here, that I quite like this guy. I always liked beefier versions of giant robots. I'd get this one.