As far as I know there have been three incarnations of Reideen;

This review is about that 90’s Raideen called God Reideen, which hails from the show Chouja Reideen, or Reideen the Superior. 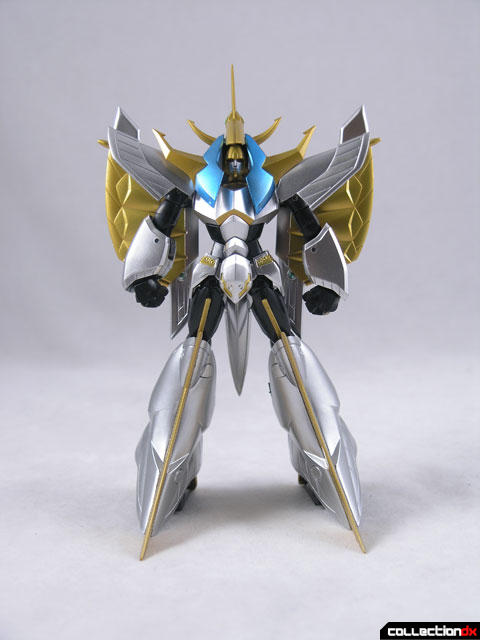 I’ve never seen it, but I know it focuses on 5 yaoi-looking boy characters in bird suits who occasionally summon God Reideen. Seems flaky to me.

The Reideen design is cool, however, and it’s a design that does not get a lot of love in toy form. In fact, the only other toy was a diecast version that came out just prior to the SOC series. It is often thought that this Reideen toy was the precursor to the SOC line, as it is similar in size, scope, and material.

The fact that they made another toy of this design gives me hope that the SRC line will be a unique and original line, and not just the same old characters re-hashed. A quick look at the upcoming lineup (Gear Fighter Dendoh, Sunvulcan, Aquarion) seems to indicate just that.

God Reideen is a bulky character with a grand design. It’s a mighty vision of gold and silver, worthy of the “God” title. He arrives courtesy of HobbyLink Japan 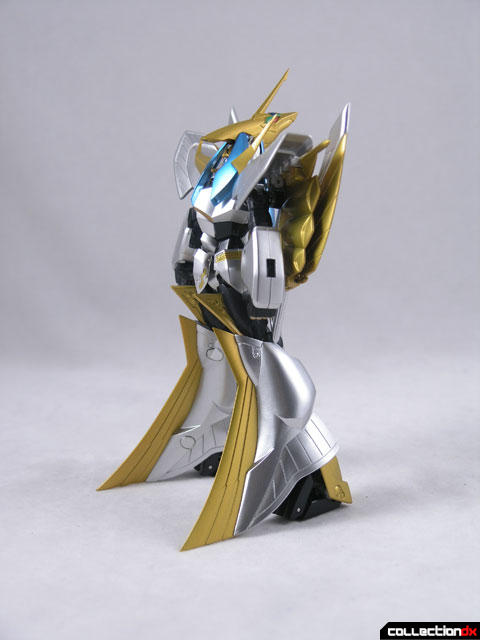 Metal content is limited to the outer silver legs and parts of the chest. The rest of the figure is plastic, with subtle paint applications. 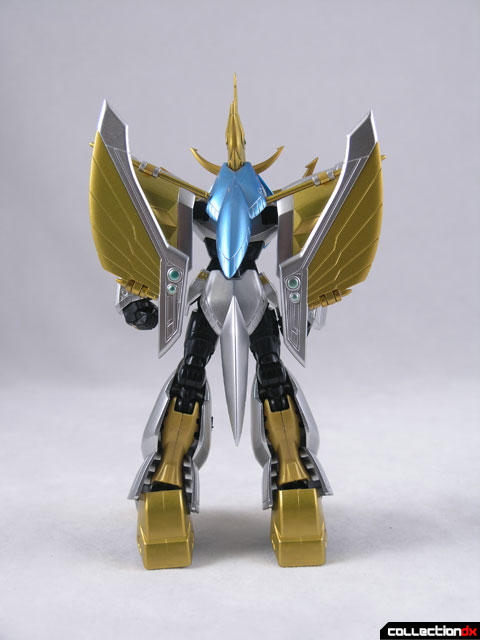 Starting from the top, the head is large, pointy, and has multiple segmented parts. Movement is limited due to the design. The helmet can be removed to get a good look at the actual face, but this is for transformation purposes only, not a feature from the show. It’s all plastic, and like the classic Reideen, hard to get to look just right. 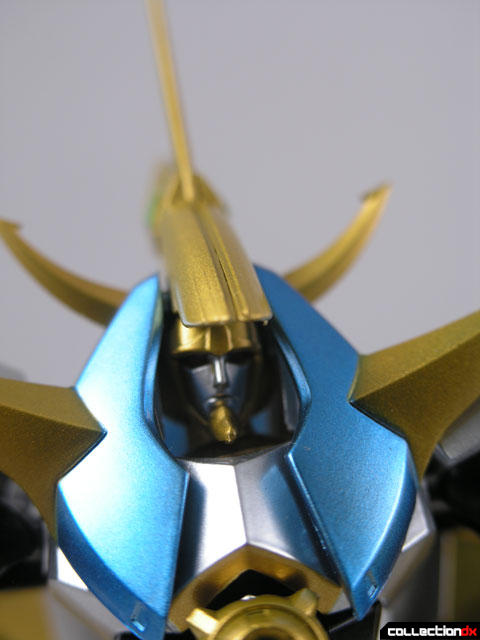 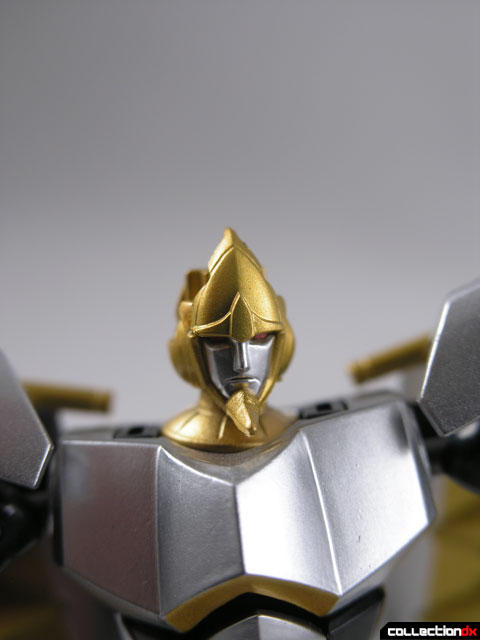 Shoulders have the dual joint and the shoulder pads are actually mounted on the back instead of the shoulders. This allows the arms to move freely. Elbows have a double joint, while the hands are interchangeable. Instead of popping the hands off of a ball joint, you pull a peg out that’s attached to the hand. 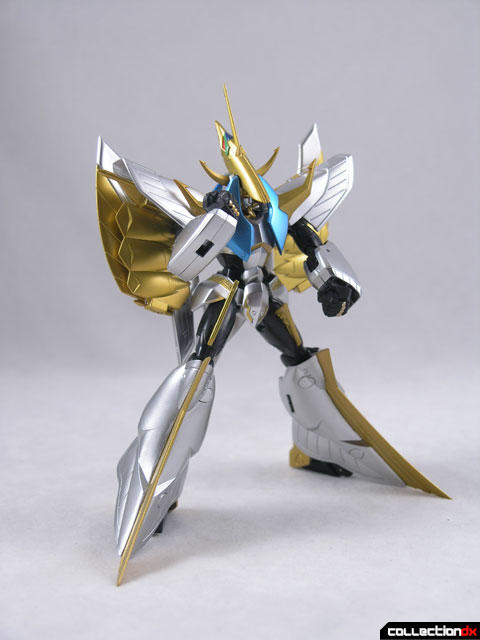 The top of the chest (where the silver meets the black) can separate, but only to remove the top panel so that you can insert the weapon in the chest. This weapon is called the God Voice. 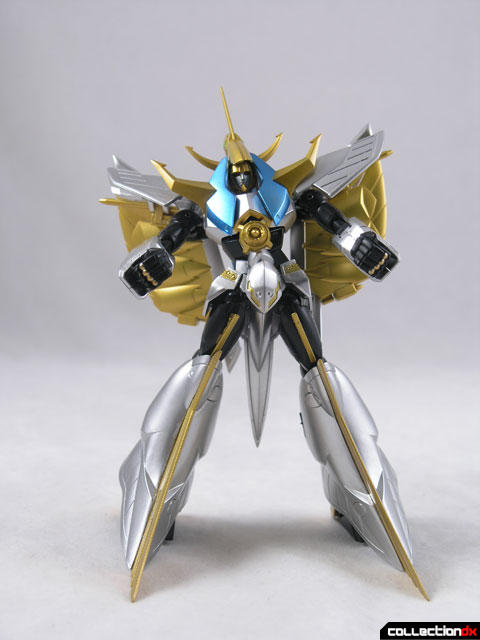 There is some waist articulation, but not much. Like I said, this is a big blocky design; it wasn’t made for dynamic poses. 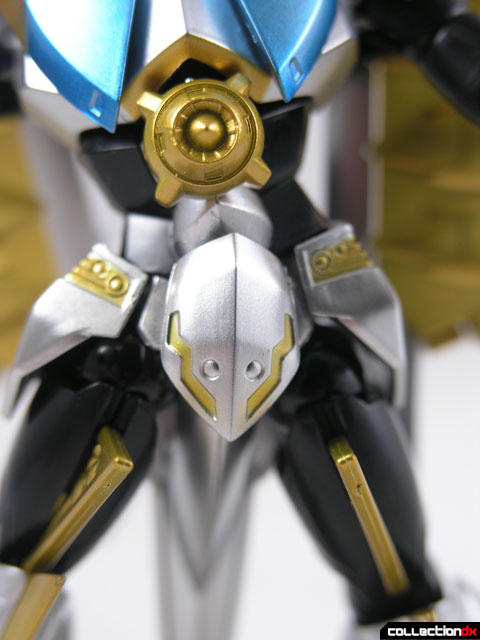 The hips have ball joints and there are moveable side skirt parts to accommodate the motion. The knees bend, and from there down its solid leg – sort of. The heels move, but that’s more of the secret that’s stored inside than proper articulation. 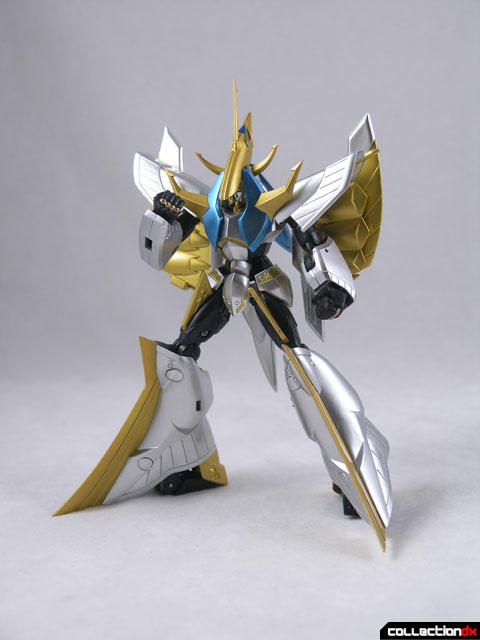 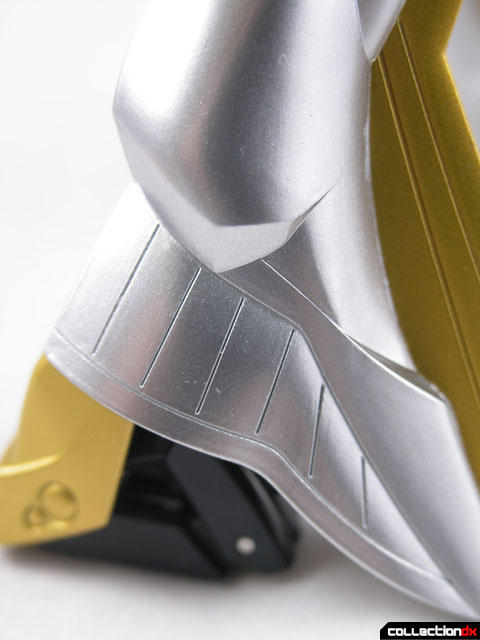 In addition to the cannon on the chest, God Reideen has a few more weapons. There’s a shield that goes on the right arm that has a detachable blade. In its closed form it resembles the God Break from the classic design. You can swap it with a separate part that resembles the shield in its “open form” – a large mirror. 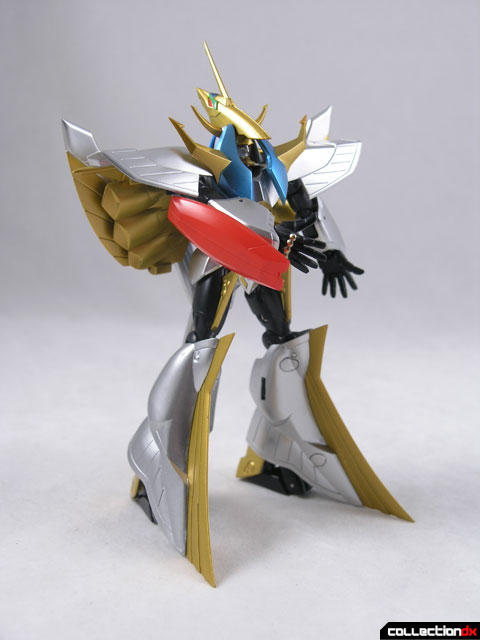 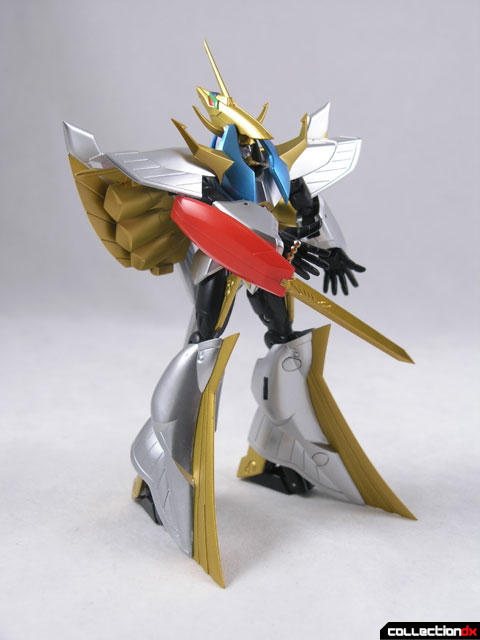 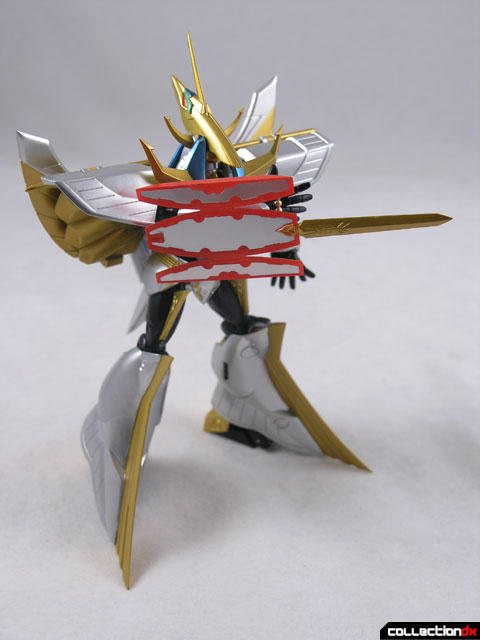 On the left arm you can attach a smaller bow weapon that can open and close, as well as extend an arrow. To replicate the full bow and arrow, Bandai has included one solid piece. This would have been a good idea for the regular Raideen! Special hands are included to hold this weapon. 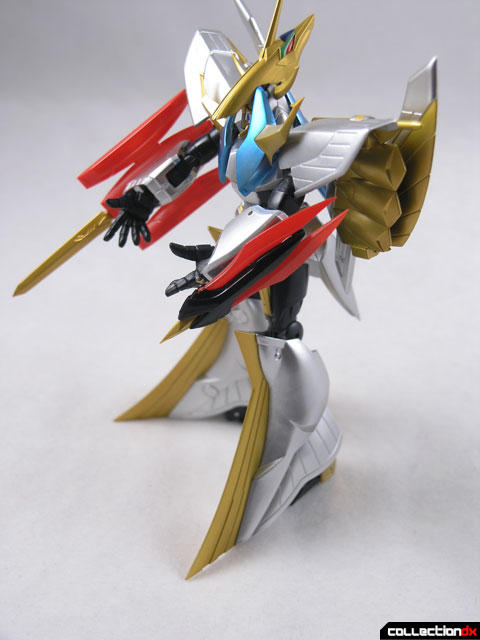 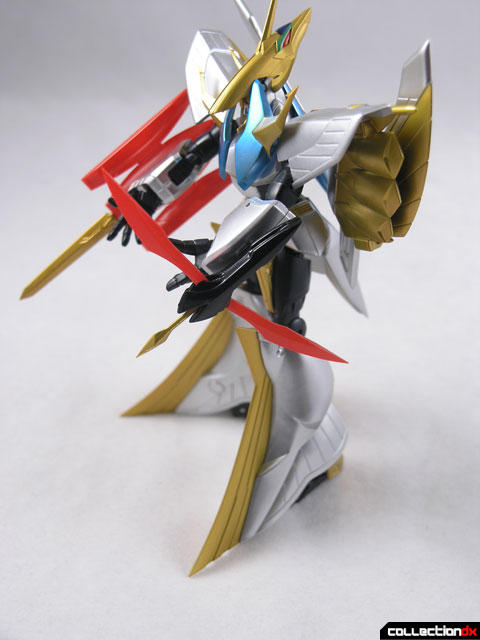 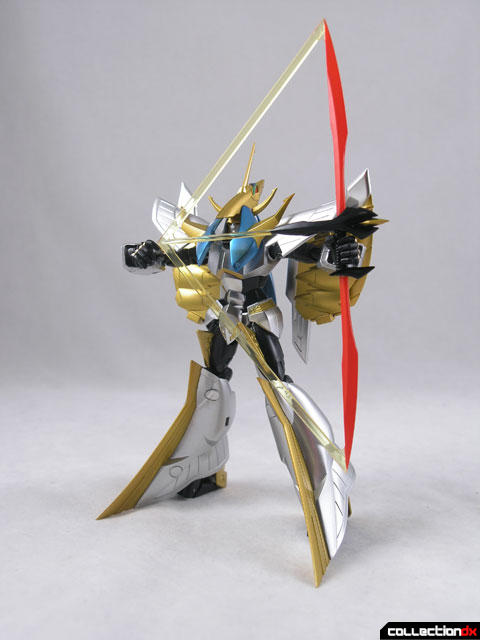 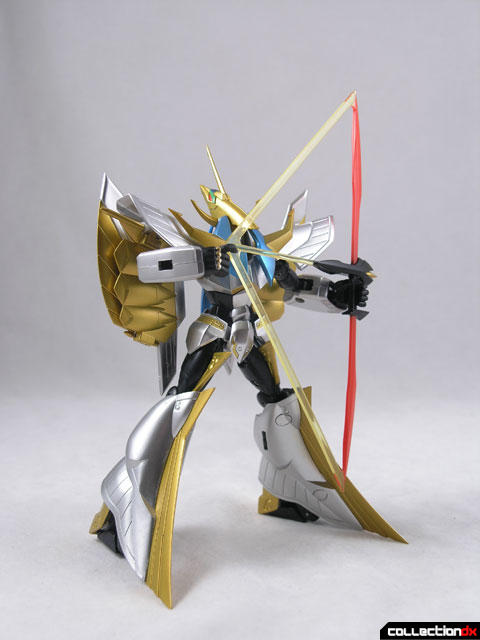 Like the classic Raideen, this toy transforms into god bird mode. While transformation is relatively self contained, the final form is not very precise.

First you need to remove the helmet, and replace it with the bird mode head. I had a manufacturing defect on mine where the covering plate was glued on at an angle. I have not heard of this being a widespread issue, so it’s likely just mine. 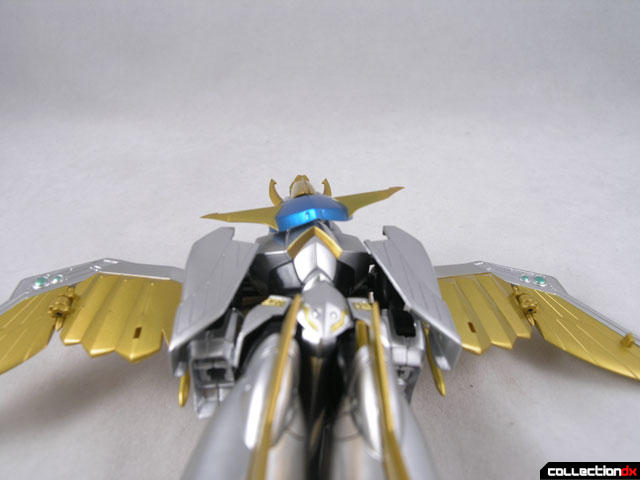 Take the hands out and make the arms straight along the sides, then fold down the shoulder pads and unfold the wings. It would have been nice if the arms or shoulder pads had tabs so things could lock together. 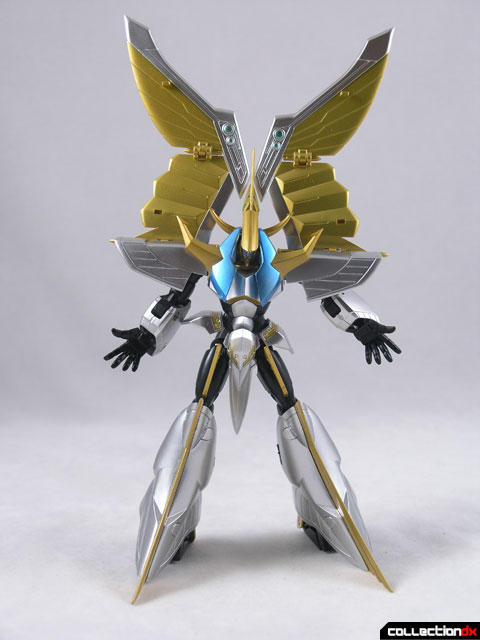 The legs are interesting. Pull the silver lower legs up towards the chest and pull the claw and leg assemblies down and behind the figure. There’s a small black tab in the leg to make the two legs attach together, but it doesn’t hold very well. 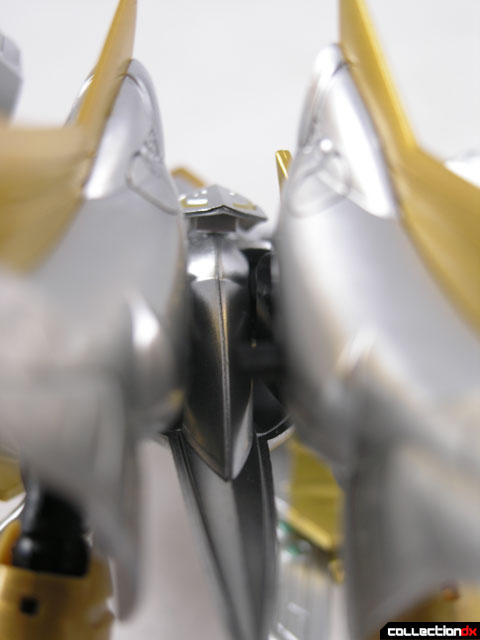 Pull the claws under the back and unfold. The claws are sharp and segmented. 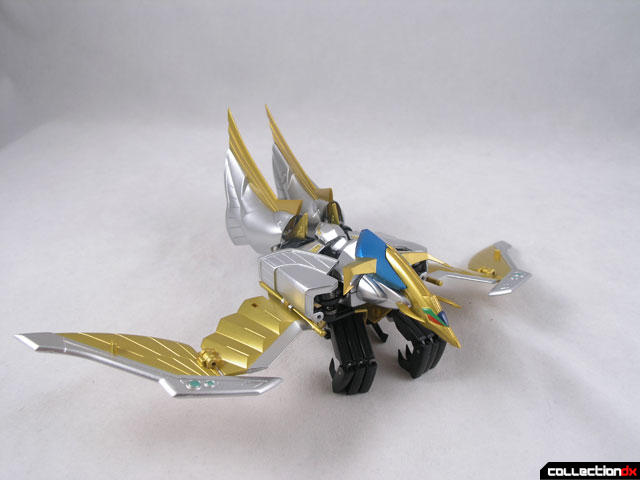 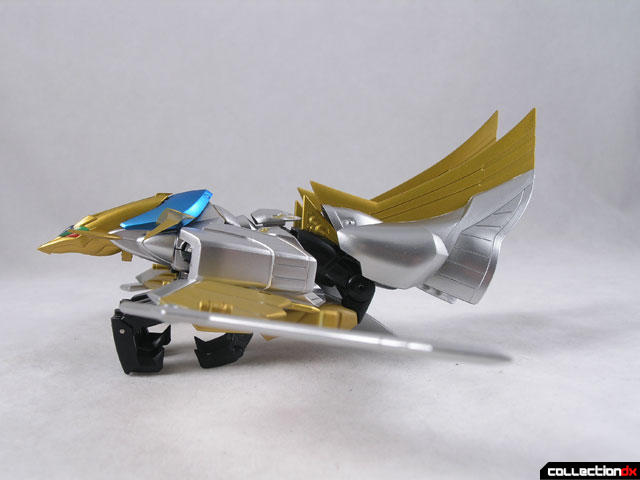 Bird mode is not bad, but suffers from the lack of pegs for precise placement of parts.

There's a small hole on the back under the blue head part that can accept a Tamashii Stand connector. 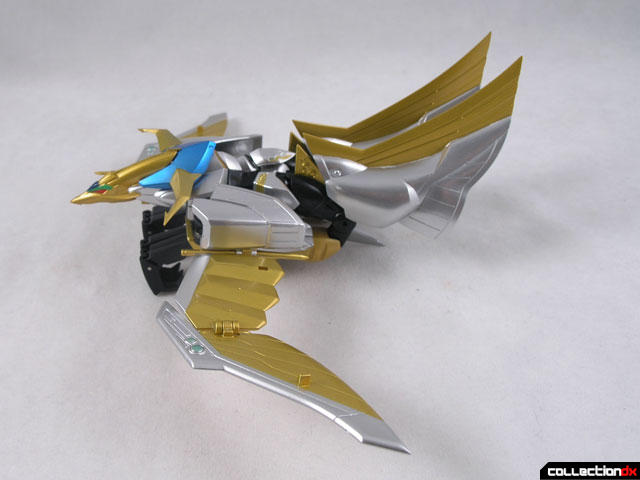 Overall, though, I am reasonably happy with this release. I think it could be better, but I was happy to see an obscure design get new life in toy form. I do think though if you really like this design, track down the earlier Chogokin which does it right, although less accurately.

You can get your Super Robot Chogokin God Reideen at HobbyLink Japan. 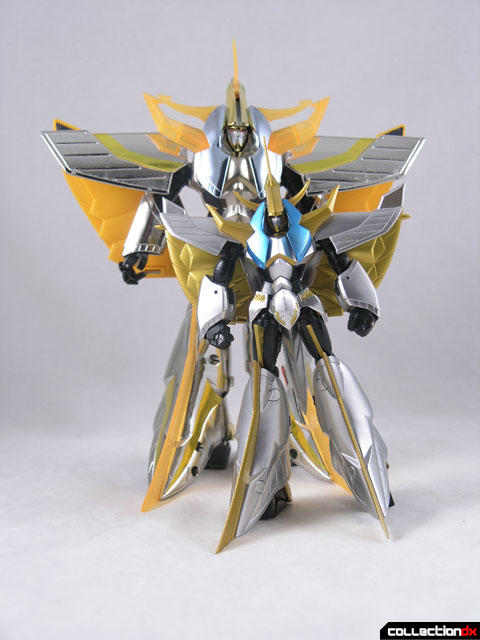 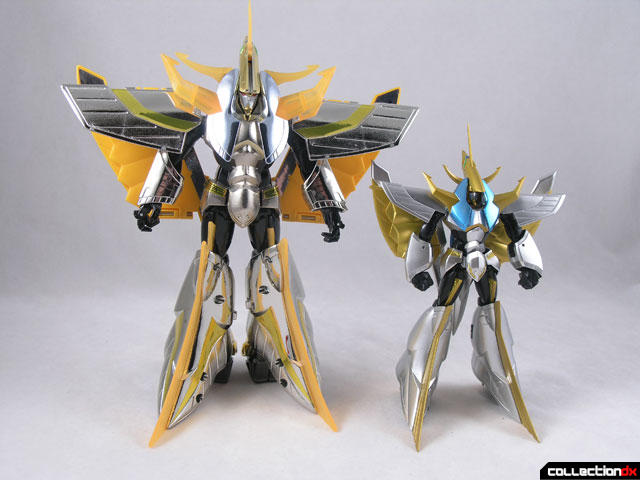 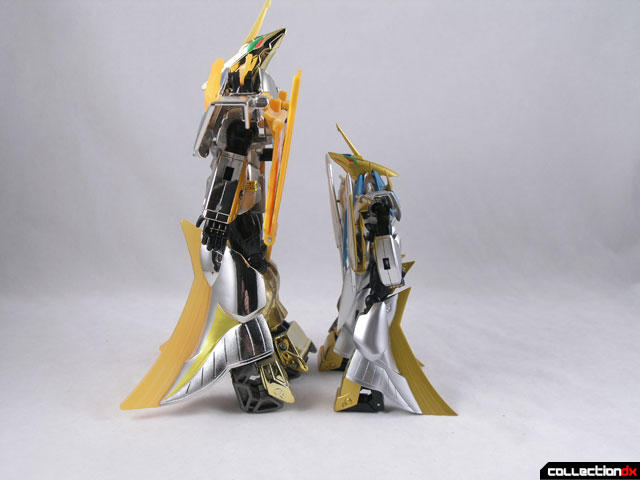 God Reideen was summoned using the twelve Zodiac Stones, and our heroes were scrambling to get them before the villains, the Chouma (Super Devils), could use them to control God Reideen itself. Of course, God Reideen needs a maiden of pure heart (aka a virgin) to allow one to control it. In the end, the leader of the Chouma gets wasted, the maiden herself takes over and her warped mind influenced the behavior of God Reideen from that point on. It even turned black during the final episode!

Not once did any of the ten lesser Reideen (Yeah, there was another team of five bishounen) ever take control of God Reideen. Maybe that was a taboo?

I have most of those bird boy toys. I'll review a couple soon. Short review: they pretty much suck.

Correct. In the anime God Reideenn diddn't move much at all. It pretty much stood in one place and fired away from there. Other than that, it did a little bit of flying in space, but that was the extent of its movements. Oh, and it was a "Bad Guy" until the end...

rad design. and good lord is that a '97 bandai GR? that thing is gorgeous
as I side note, I for one love '07 reideen.

Not only are your reviews great, but you obviously are a man of high taste. '07 REIDEEN isn't the greatest design, but if they came out with an SRC of it I'd buy it in a heartbeat (though I'd much rather have Saiga and Hoshikawa figma, but that's never gonna happen)

I do want this one, though; God Reideen is one of those mecha I thought I would never personally lay my hands on, but then SRC made all my dreams one true. I'll have to pick this one up.

couldn't agree more about '07 Reideen.
I love how the mecha was reinvented into that ancient golden machine all covered in runes and clockwork and crystals.
I'm ALL about that.
and the ultimate attack? that sword that was the size of the MOON? forget about it.
as a side note, do you know if any toys were produced of the '07 version? I did some snooping but found nothing.
I'd love to get my hands on one.

I wonder also if there were any toys

I'm not going to complain that you reviewed the toy without watching the show,since unlike others,I don't really think it's necassary to see the source material to evaluate a toy. In fact,it might be better if you didn't see the show first,because your review won't be tainted by your love of the character.

That said,I don't really think you should open the review by making fun of a show you've never seen. I've never seen it either,but I'll at least watch an episode before I start ragging on it. Since I've been on the site a couple years,I know you're one of the top American experts on robot toys,but if I was a new reader,I'd wonder how serious you were about anime related toys.

Well I doubt he meant yaoi as a compliment. ;)

It's not like I was offended or anything,I like Josh's reviews,I like the site. I just think it makes people look less credible when they say,"I've never seen it but...." If I didn't already know Josh (or at least online "know" him) I'd probably dismiss the review.

I only meant it as a constructive comment,I'm not trying to insult anyone.

I have never seen this version of the show, other than what I found on Youtube, but I picked this one up purely based on this review. Thanks!

Ugh! Having just about completed my SRC collection, baring repaints and upcoming stuff, I feel I can say without fear that this is the absolute worst figure in the SRC line. Even Bandai can have an off day. Maybe they made it after a National three day tequila bender holiday? I don't know? But short answer, It looks more or less nice (in an overly silvery blue CGI'ish 90's sort of way), so long as it is standing in a solid neutral A pose. Don't worry much about that, because of how the Roided up hot mess is designed, that is likely the only pose you will ever actually get it in. the wings are a mess. The transformation is a mess. The arms and legs clash so badly with other parts of the robot that they can barely be moved. The hands fall off. constantly. Forget holding weapon. He can only hold is bow horizontally in front of him, shooting sideways. They put the metal ratchet joints in the idiotic transformation bird arms, instead of in the knees right next to them. So it can barely support its own weight. Every time you move one thing 2 more fall off. Unless you have a real fascination with horrible 90's robot reboot designs, skip this guy in your collecting until last. And even then hunt him down as cheap as possible. $20-30 is barely fair.

On the positive side it is a kind of pretty shade of metallic silver blue. Kind of like your grandfathers old buick from back in the day. A nice pretty silver blue statue. Just make sure there are no breezes passing by or parts will fall off. Although to be fair the big honking 90's feet mean it stands well, so long as the knees don't flop over.