As a mecha enthusiast, I have what you may call fetishes for certain design elements. Things like backpack wings, a part that sticks up behind the head, long rifles, and some kind of space jet mode almost always turn my head. The RGZ-95 ReZEL hits all of those things in just the right way. 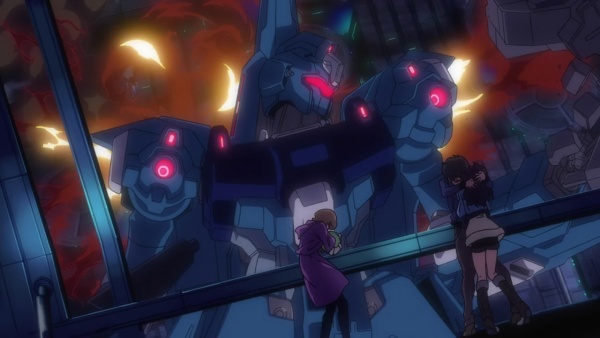 Hailing from the latest and greatest entry in the vast Gundam franchise, the RGZ-95 ReZEL (Refined Zeta Gundam Escort Leader) is somewhat of an amalgamation of several different transformable Mobile Suits. Everything about the ReZEL oozes that signature Hajime Katoki style as he incorporates features from many of the Mobile Suits he designed and redesign. Wrap it all up in a Jegan-esque skin and you've got one sexy mass-produced Mobile Suit.

The Gundam Fix Figuration (GFF) line has persisted since its creation and with the inception of GFF Metal Composite spinoff line there has been a major shift in the main GFF line. Gone is the spotty PVC construction of the old toys as the new GFF Next Generation (GFFN) toys have taken cues from their GFFM brethren with more solid plastic. I was looking for a good toy of the ReZEL and I am very pleased by the GFFN figure. 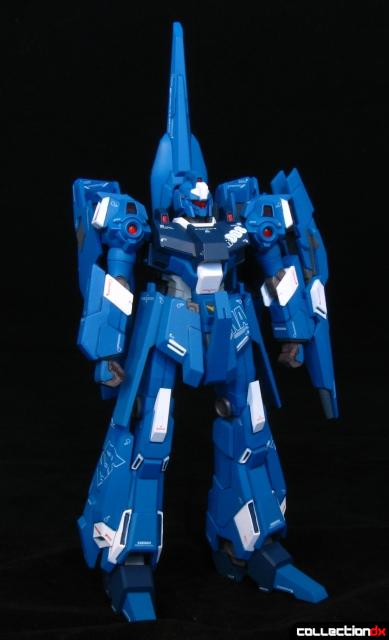 The ReZEL is a 1/144th scale figure and is around six inches tall. It can be outfitted with two different wing binder sets. 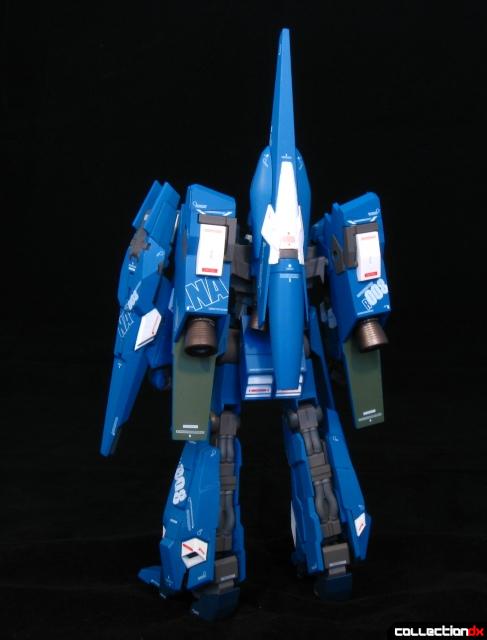 This is the standard configuration with it's more sedate looking engine nozzles and boosters. These plug into a pair of balljoints on the back of the figure. 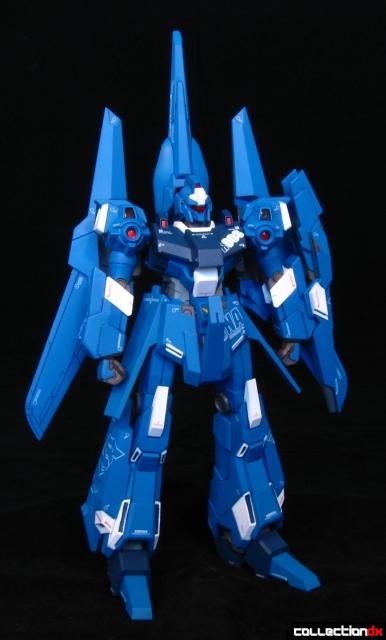 And this is a commander's unit featuring variable geometry wings. 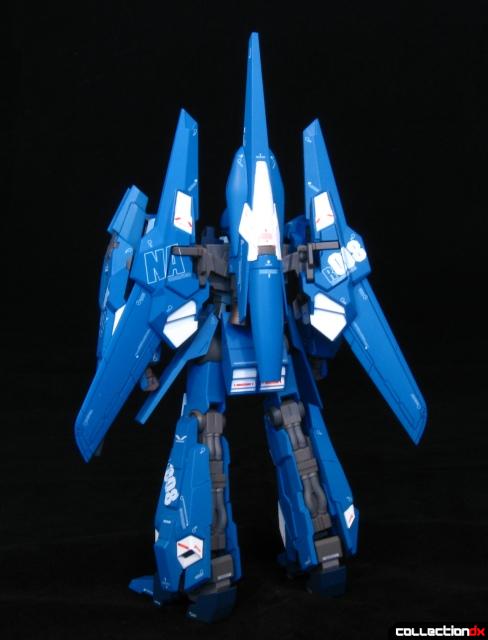 These wings use the same balljoint with uncovered sockets that cup the ball more than fit over it. 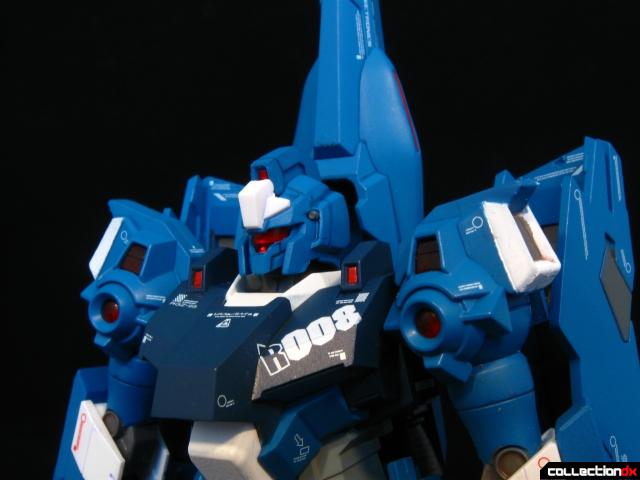 The ReZEL is a very detailed figure with multiple tampo markings and subtle highlighting in the paint applications. I really like the use of clear orange parts for various sensors. They really pop against the toy's blue body. 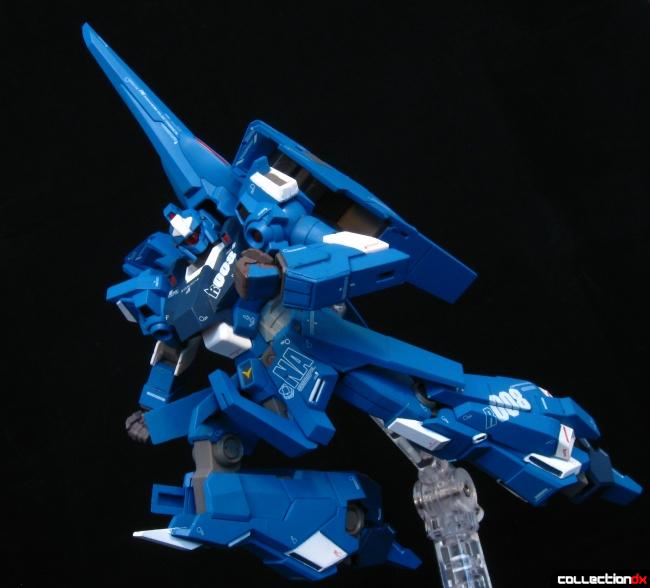 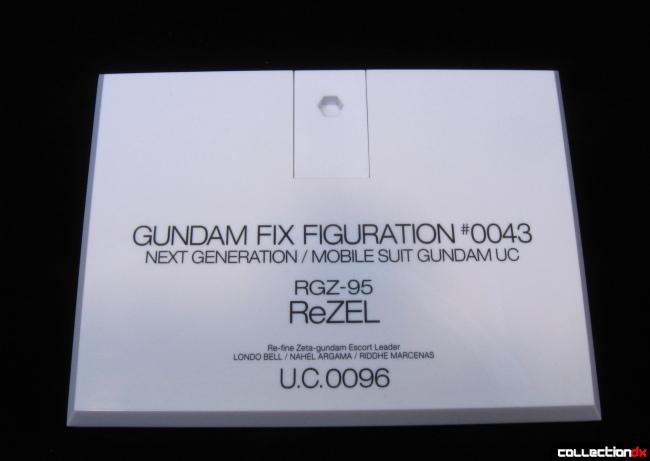 Like all GFF figures, the ReZEL comes with the line's signature pretentious white display base. This base is made from hard plastic and is almost larger than the toy itself. The slotted piece near the top can accept the Mobile Suit mode stand or can be swapped out for the Mobile Armor mode stand. 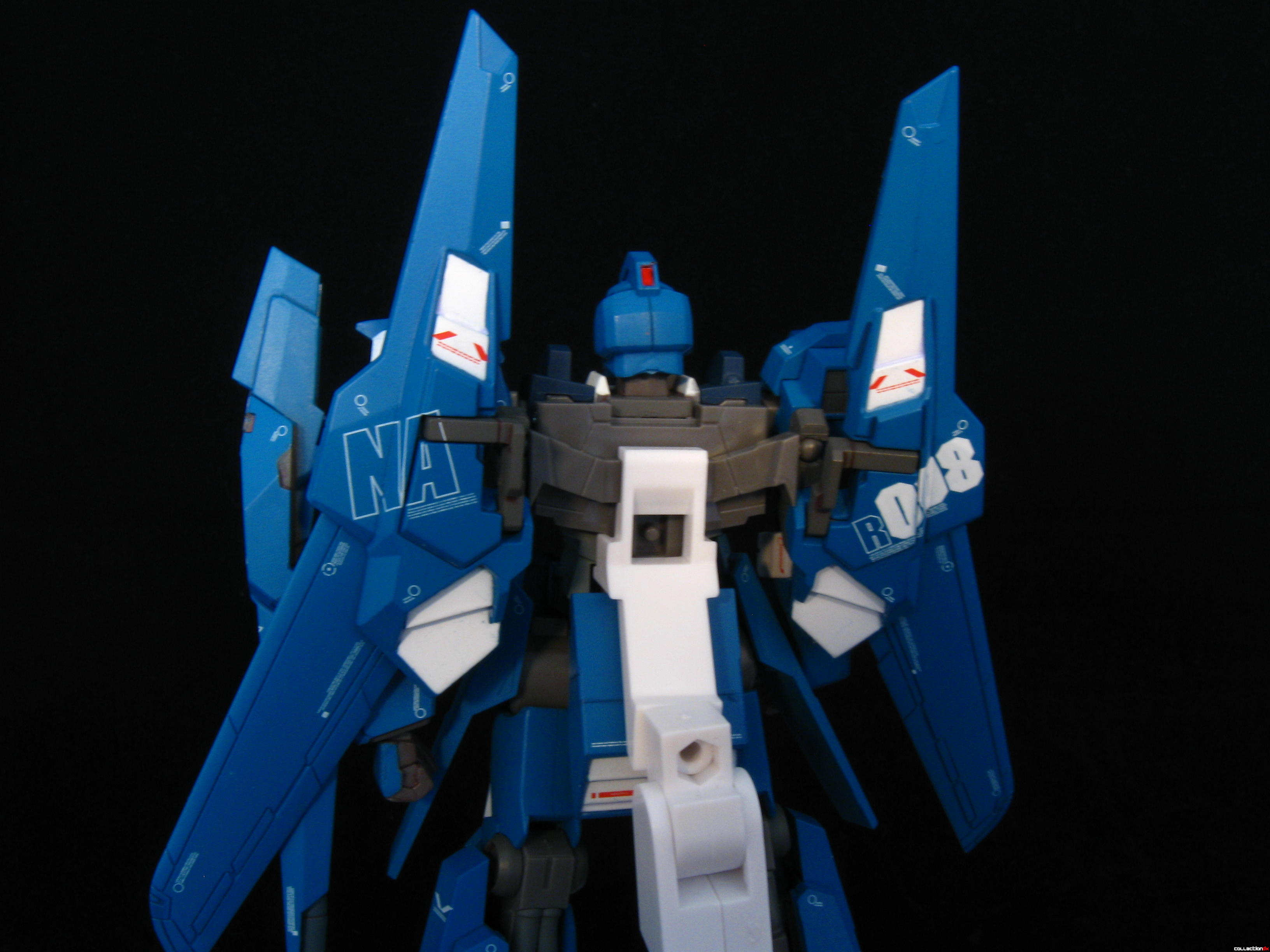 The stand attachment for Mobile Suit is one of the weaker aspects of the toy. You basically sandwich this part in between the backpack nose section and the ReZEL's back. This unfortunately makes an already touchy connection loose enough to cause the whole assembly to pop apart. 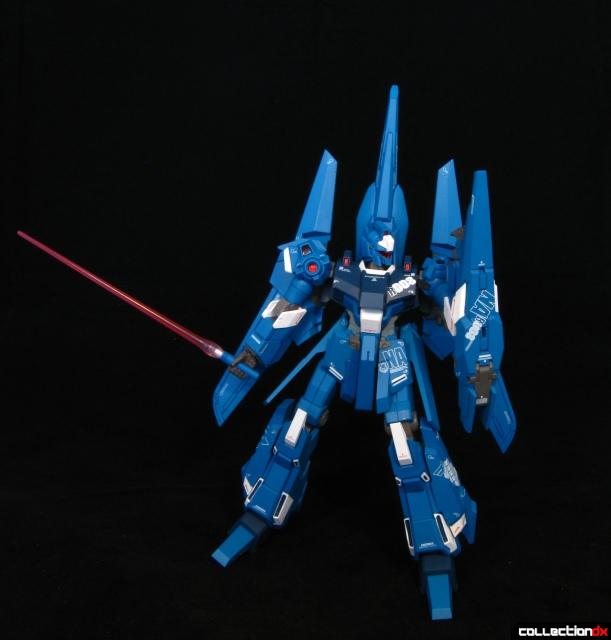 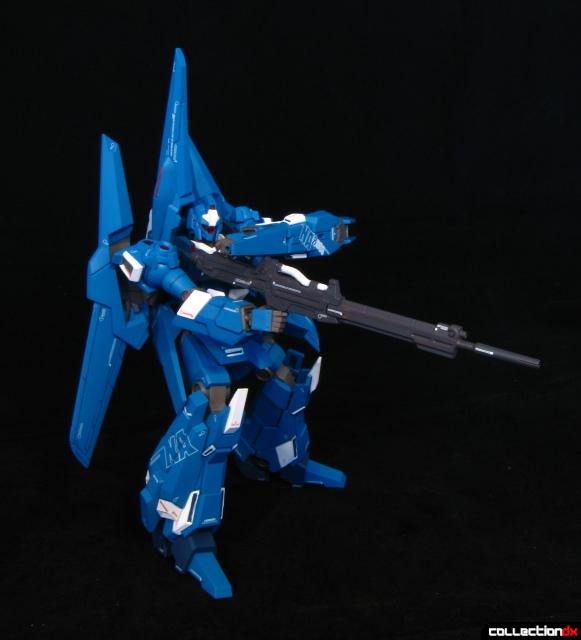 The ReZEL also comes with the requisite beam rifle and two hands for holding it. The rifle itself features a collapsible handle and a swing out mount for attaching it to the shield. 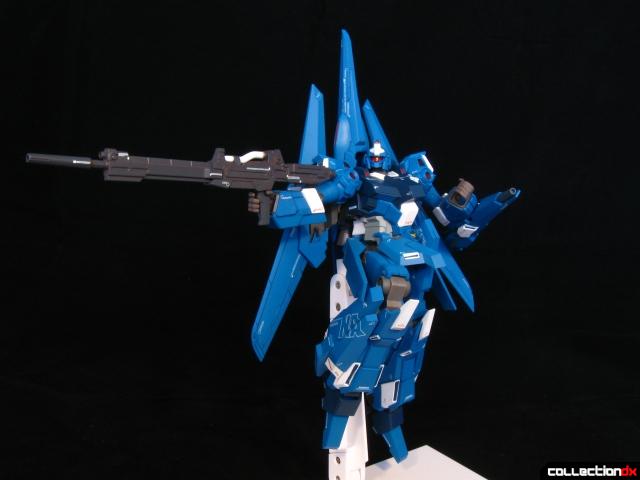 Once you get a solid connection, the stand is actually quite good. 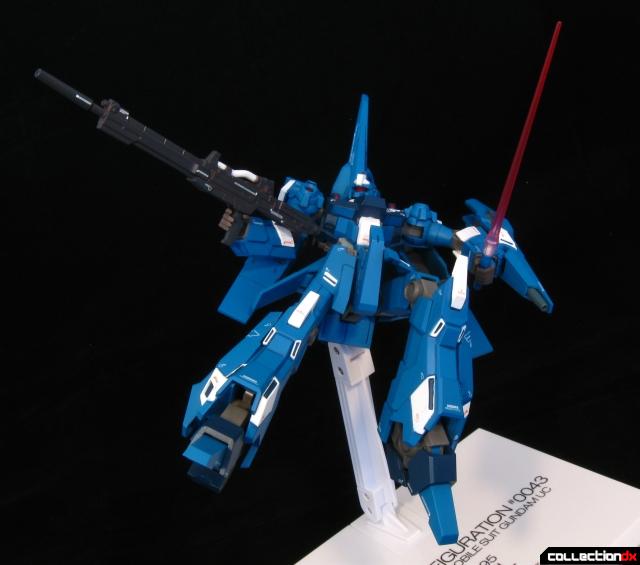 It is really stable and the connection point features a ratcheted joint for pitch. The adapter piece can also be tilted left or right. 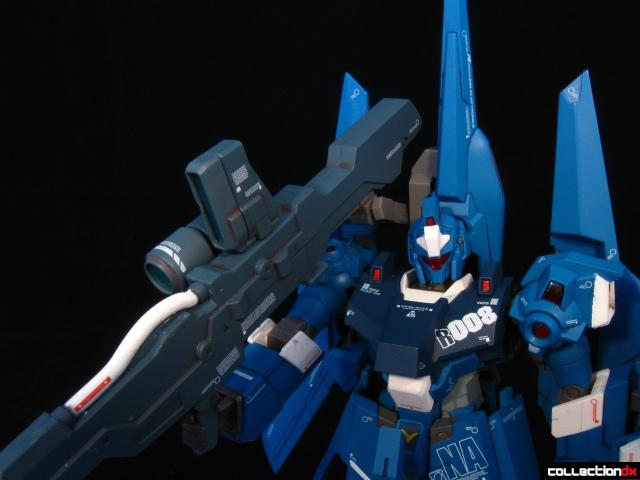 Taking a cue from the Full Armor ZZ Gundam, the ReZEL can be equipped with a large back-mounted weapon. The Mega Beam Launcher is almost as long as the figure is tall and features subtle red highlighting along the panels lines and sparkling green sensor arrays. 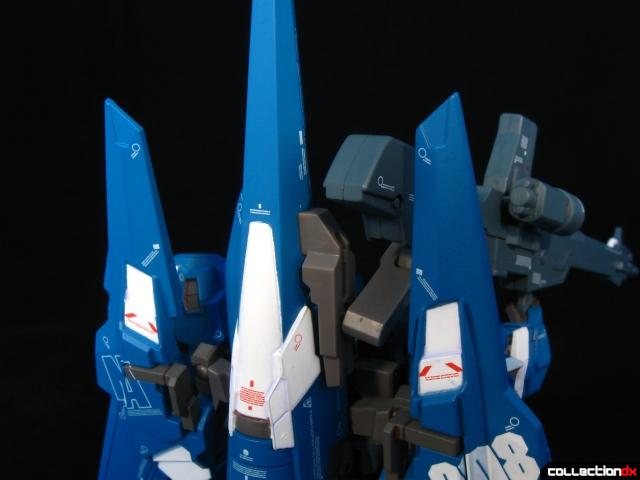 To attach the Mega Beam Launcher simply pop off one of the blisters on the side of the backpack nose and plug in the articulated support arm. The support arm is made completely from hard plastic. 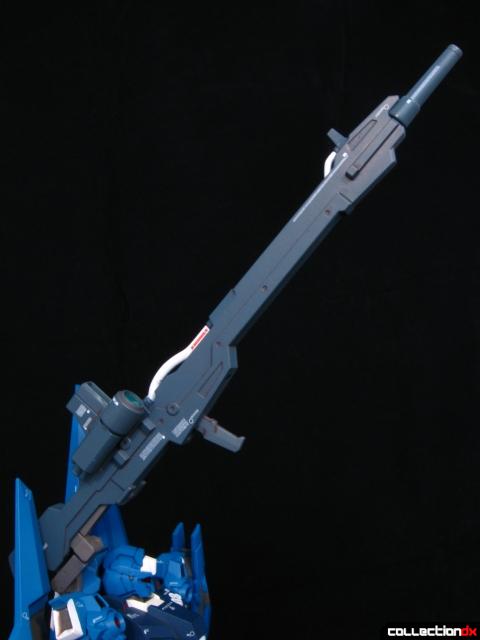 One nice thing about the support arm is that it is very stiff. As you can see, the it has no problem keeping the Mega Beam Launcher steady in any pose. 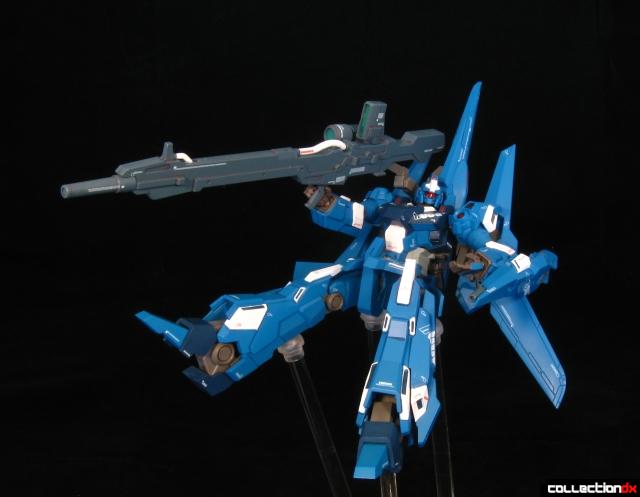 Overall, the Mobile Suit is quite sturdy. While the backpack nose section is kind of problematic, I feel that's not enough to distract from the solidness of the toy. 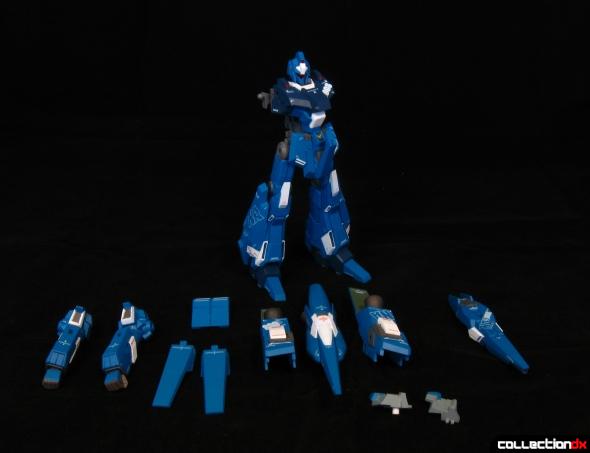 The transformation requires a fair bit of parts removal. However, unlike another recent Bandai toy, all of the parts you take off the ReZEL are put back on the toy in the same or slightly different place. 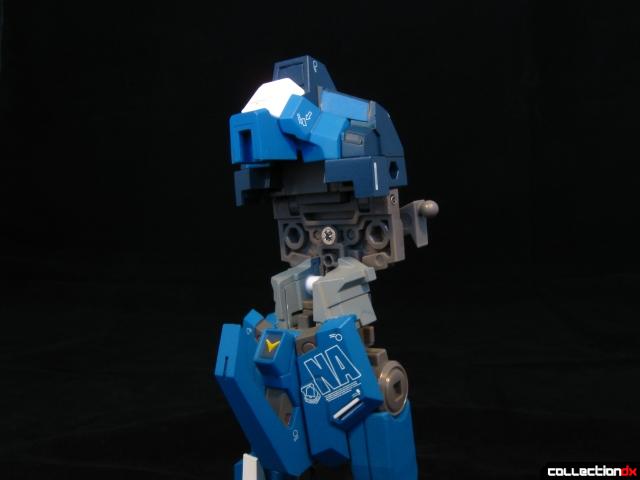 Flip the chest up and push the head in. 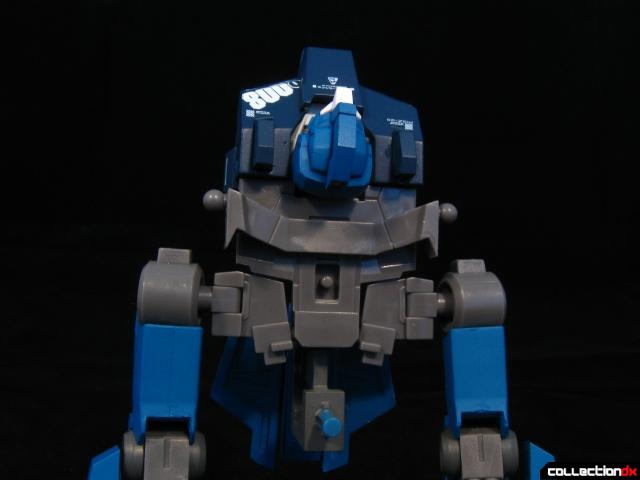 The legs and hips move outward and snap into the back via a few hinges. 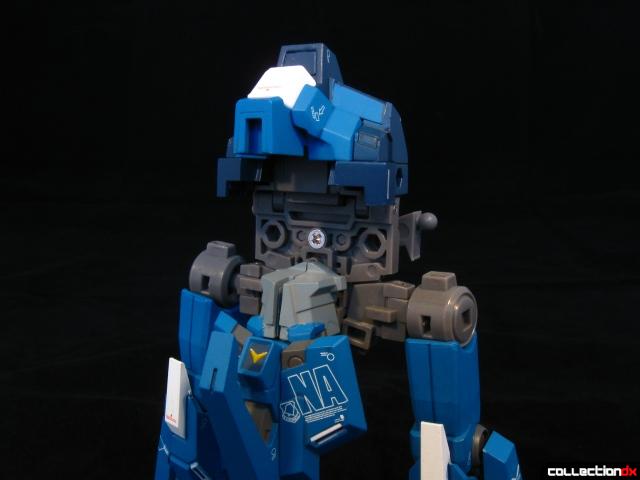 Now you remove the chest sections, combine them, and stick them back in. 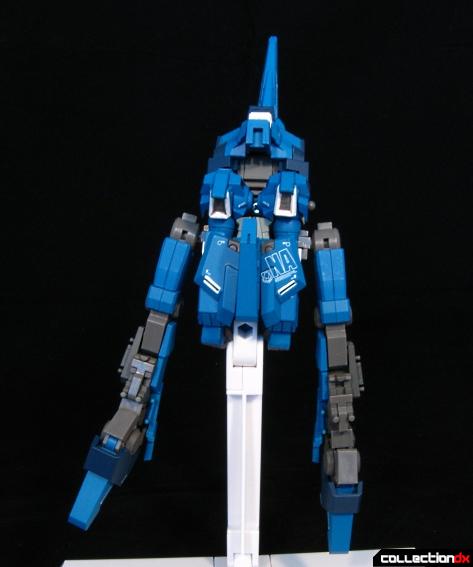 Now reattach the arms to the underside of the chest. The instructions say you are supposed to remove the front skirt armor so you can direct reattach the arms but I've found you can just thread them through the sides and bypass that step. You're also supposed to strip off the outer leg panels so you can remove the whole foot section just to place it maybe a few centimeter higher. Why they didn't go with a simple telescoping mechanism is beyond me, but honestly you can skip that part of the transformation entirely as you will barely notice the difference. 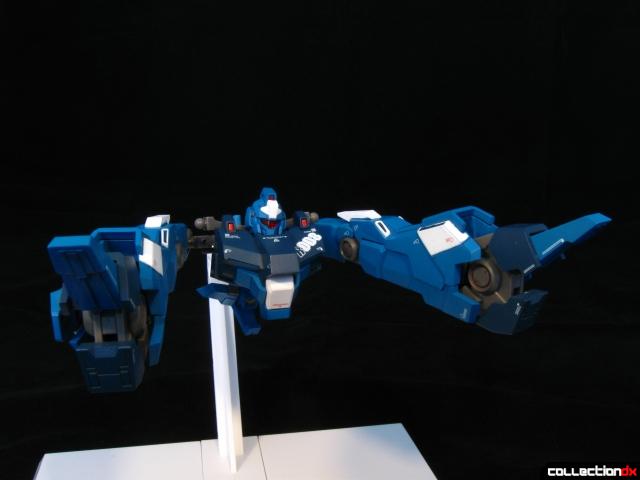 Now you can start to swing the legs forward and reattach the remaining parts in the same place as in Mobile Suit mode. 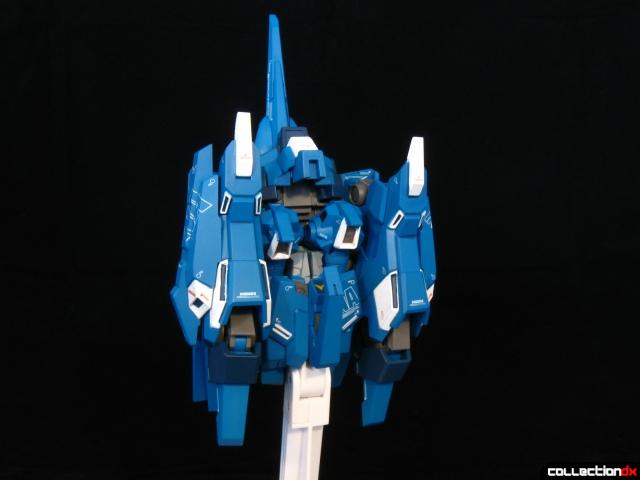 It's almost done at this point. Now all that's left is to slide the shield into the waiting crotch hook. 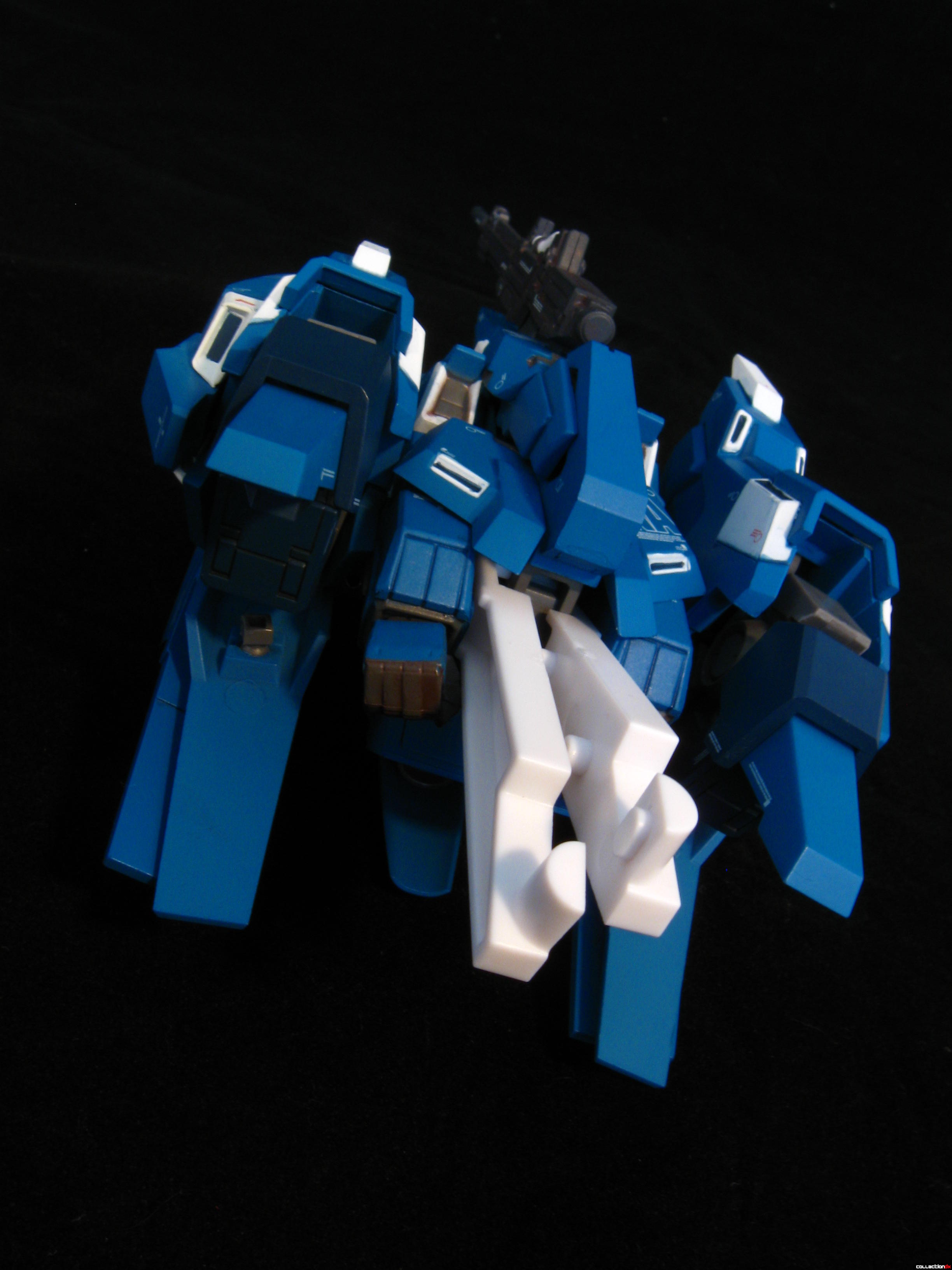 Finish off by attaching the stand adapter. It consists of a pair of white plastic parts that fit into the cavity left by the hip plates. 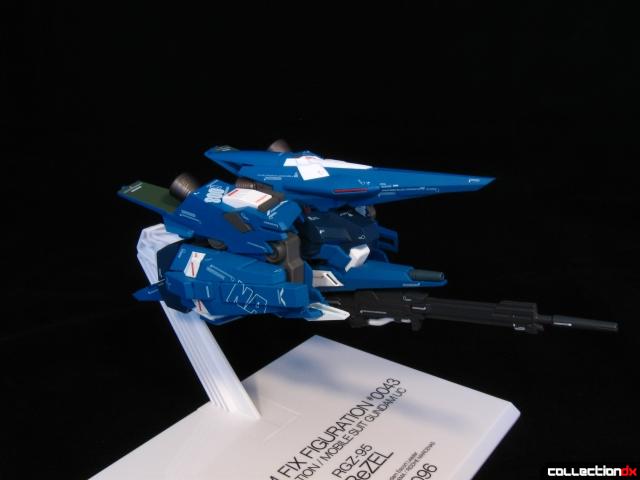 The finished Mobile Armor mode is really solid. It's basically a small plastic brick with engines. On the stand, the ReZEL looks like a legitimate desktop model while the figure itself still has that toy-like durability. 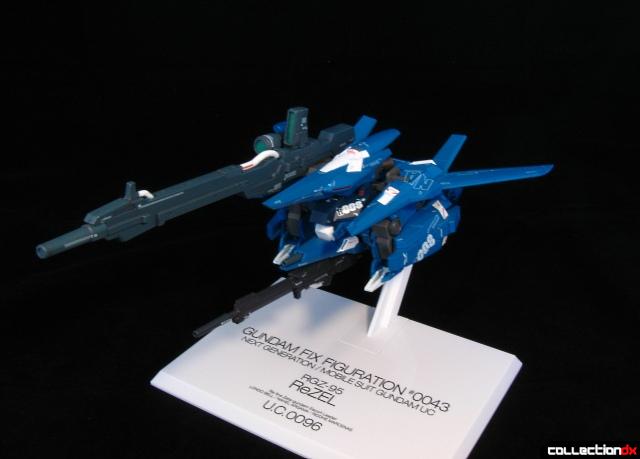 The Commander's version is a plastic brick with wings! The addition of the Mega Beam Launcher compliments the anime space fighter look. 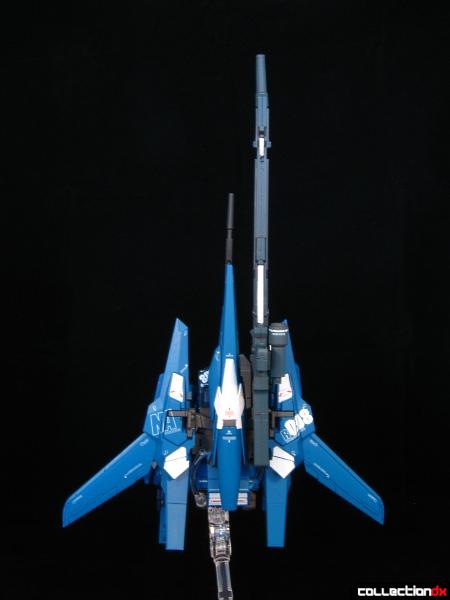 As I alluded to in my Armored VF-25S review, I really dig the whole Japanese shooting game design philosophy. Holding the ReZEL up like this gives me the same vibes from playing Ray Storm or Raiden. It's just something that gives the toy a nice shelf presence.

Overall I find the GFFN ReZEL to be a very satisfying figure. It has a sharp sculpt, good articulation, excellent detailing, and looks great in both forms. Moreover the accessories such as the beam rifle and Mega Beam Launcher give it that perfect Gundam feel. Although, even if you choose to leave most of that stuff in the box, it still feels complete with only the bare minimum of parts like the shield and basic fists since that's all you need for both Mobile Suit and Mobile Armor mode. Despite the nagging problems of the touchy backpack and the "disassemble style" transformation, I really like this toy. 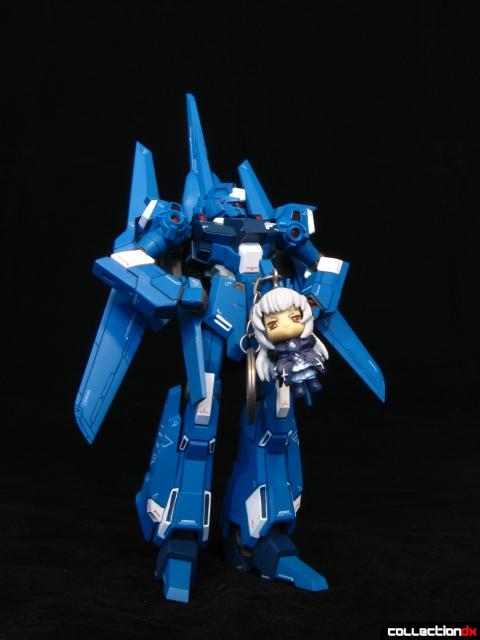 And I really love the love hook.

11 comments posted
Cup the balls - do not grasp

Cup the balls - do not grasp them. This is an important lesson to be learned from this toy.

This review has pretty much cemented the GFFN line as a winner in my mind. Now, as soon as I pick up a ReZEL or whatever MS I like that they put out next, I know I'll be happy.

It's not like I'm not already giving Bandai all of my money. ;w;

Mr. Veef, what sort of lighting setup do you use to get those marvelous pictures? Is that just a cloth backdrop? Forgive me if you've answered such questions before.

Just a photo-tent and a pair of 55 watt lamps.

Thanks for the information ... both of you.

will definitely get one.. this is pretty much the same with the zeta plus 0000 limited edition. details and accessories tells me that im gonna get my money's worth. great review \m/

As a rule, I build my Mobile Suits, rather than getting more durable versions like I do with other robots.

Still, you just made me SORELY tempted to dip into a new toyline.

I applaud your skillful presentation and curse the potential damage to my income.

It seems that is gonna take sometime for Bandai to release a Master Grade of the RGZ-95 ReZEL. They just launched the HGUC 1/144 Commander version.

Patience is a virtue, friend. I can wait.

There will be a puddle of drool anytime I stare at this review too long but, blast it all, I -MUST- wait!

If I remember correctly, Bandai has actually promised 3 completely new Unicorn Master Grades for this year. I mean, with Bandai, it's more than likely what they consider "completely new" is just the HD Color Unicorn + Cage along with a few special finish versions, but whatever.

Hope is good, even if Bandai dashes your dreams for years, only to bring hope back decades after you thought all hope was lost.

Here's hoping those three include the Jegan, the Geara Zulu, and the ReZEL. Though my senses tell me that one of them might be the Unicorn-Banshee and another attempt on the Sinanju. if they said 'three in 2010' and they counted the Unicorn (version OAV/HD color), then only two more to go. Change one set of head parts and the color scheme of the existing Unicorn and you have a 'brand new' model, and take the same refinement steps from the Version Ka -to- Version OAV with the Sinanju for the same results.

A Jegan is way overdue, and the ReZEL screams fan demand. Though I really don't think Bandai wants to strain itself with a 1/100 scale Kshatriya.

OH BABY! I didn't know they made a figure of the ReZEL! Man, I gotta get that sometime; it's awesome! I love it!