You may know Blurr as the fast talking hyper fast character of the Transformers series. Well today, I managed to slow him down enough to get an up close look at what to expect with this release. This figure may look familiar to those who are keeping tabs on Hasbro's new lineup of Transformers. The reason it looks familiar is because it is technically a repaint. What? a Transformers repaint? No, never.

Hopefully you caught my sarcasm there. This is a repaint of the Generations Drift figure with some slight molding differences and paint apps. I was going to start with drift but since this one is more colorful and practically identical, I'll stick to this one since it's a newer release. Once you rip open the cheap blister card and undo the paper twist ties, you get this sleek sports car. 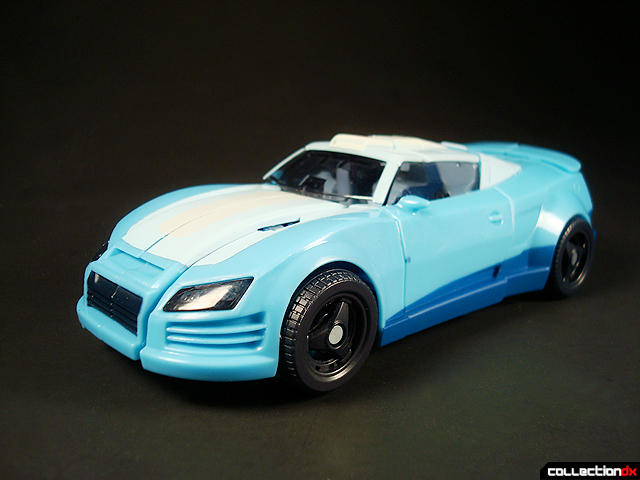 Here's a look-see at the rear. Very racy looking with the diffuser and the huge dual exhausts. Notice the slight sloppiness on the rear edge of the two tone paint job. Not to worry as it's not so noticeable while being handled. 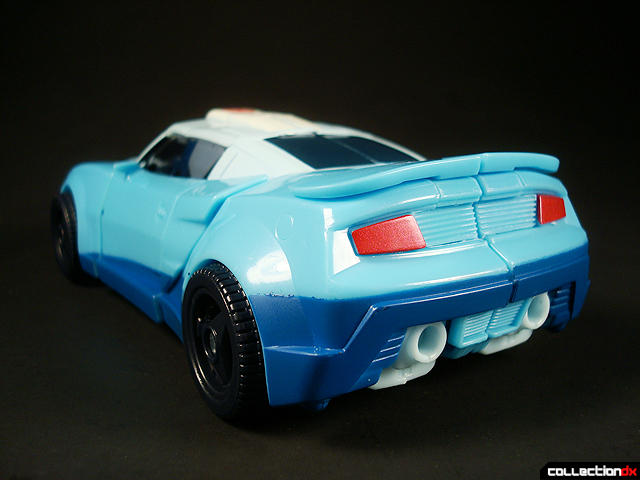 Something that caught my attention as a car lover is the glossiness of the plastic used. Made even glossier by giving it a quick buff. 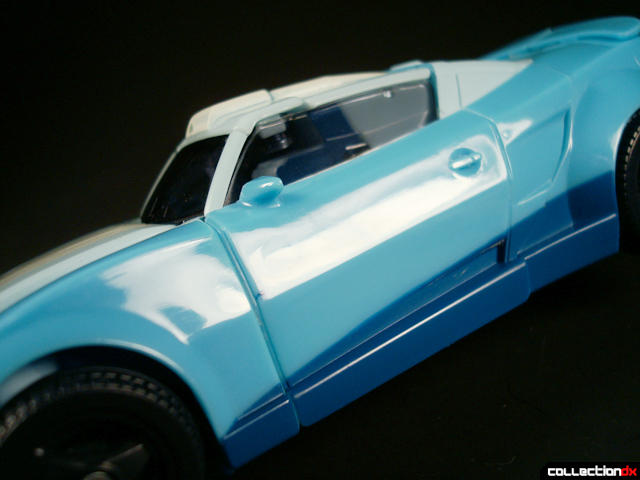 If we take a look underneath the chassis, we can enjoy the engineering involved in it's puzzle-like transformation. 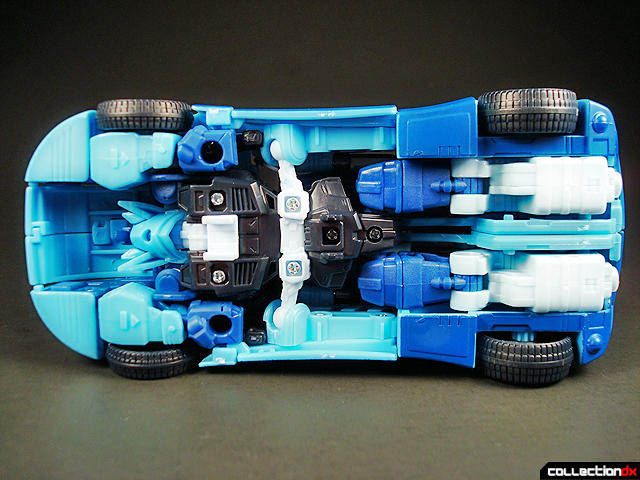 Since I didn't do a Drift review due to his similarity to Blurr, I would like to include him in this review for the purpose of comparison. Here they are side by side. You'll notice different paint apps and lens colors. Out back you'll notice Drift has a taller spoiler. 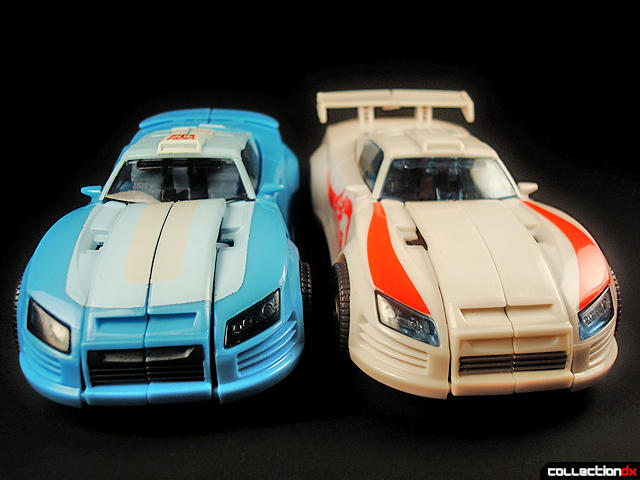 From the rear, you can see the similarities and differences. From this view you can really see the difference in spoiler size. Blurr has more coloring to keep the eyes entertained. 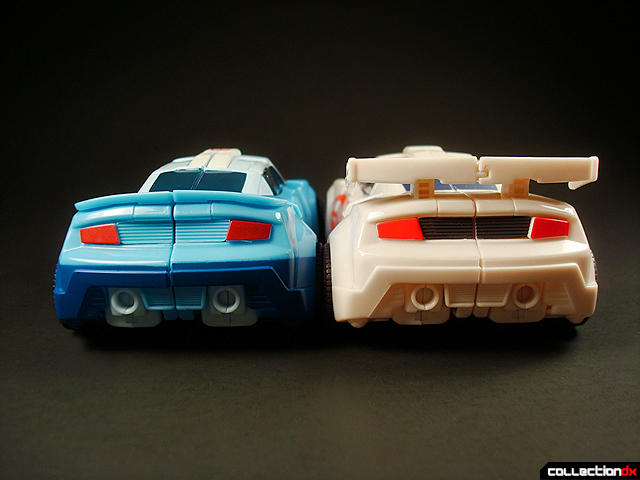 From helicopter view, you can really take a good look at how different the paint apps are between the two. In my opinion, Blurr has the superior paint job. Notice Blurr is the only one with a visible insignia while in car mode. The Kanji on the side of Drift makes him look a bit cheesy. 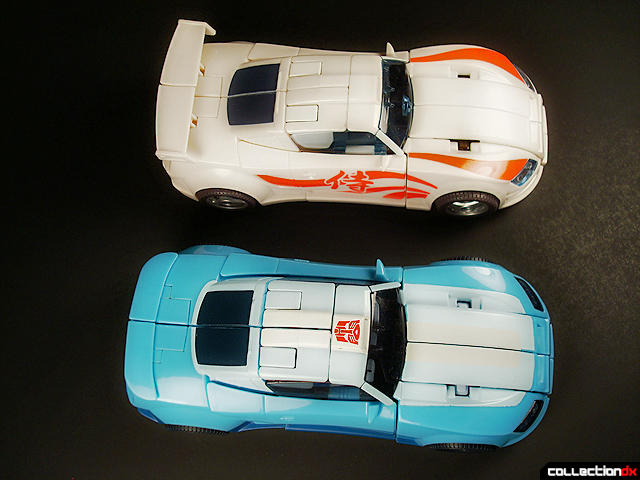 After enjoying the figure in it's sports car mode, you will get the urge to finally transform him into his robot mode. After some snapping, folding, twisting and pulling, you are left with this. His robot mode looks a but busy but it's not so bad. Notice the nice red Autobot insignia on his chest. 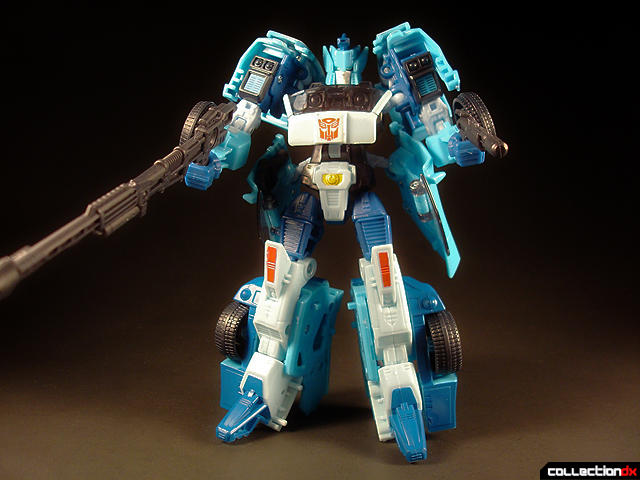 Not unlike other Transformers, this one hides all the "extras" out back. 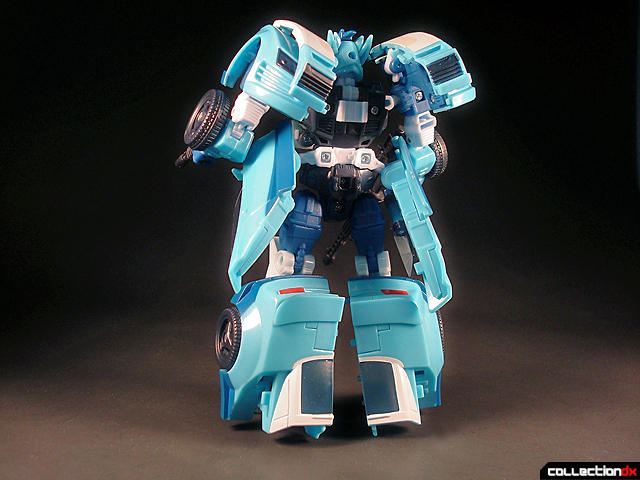 Aside from the long rifle he uses, he has some smaller pistols that store into his doors which double as holsters. 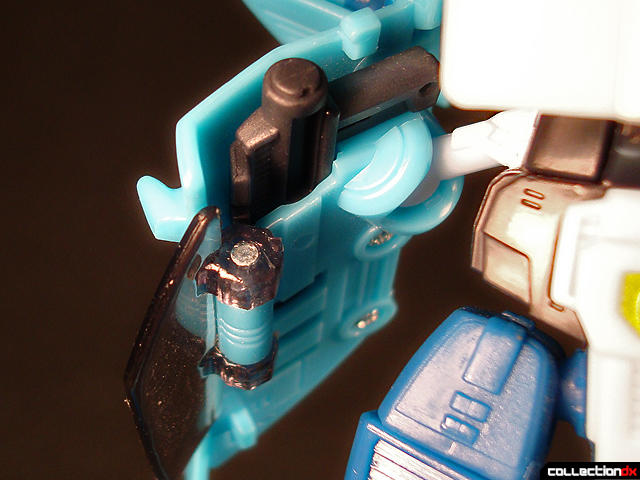 Once out of the holsters, the fun begins. 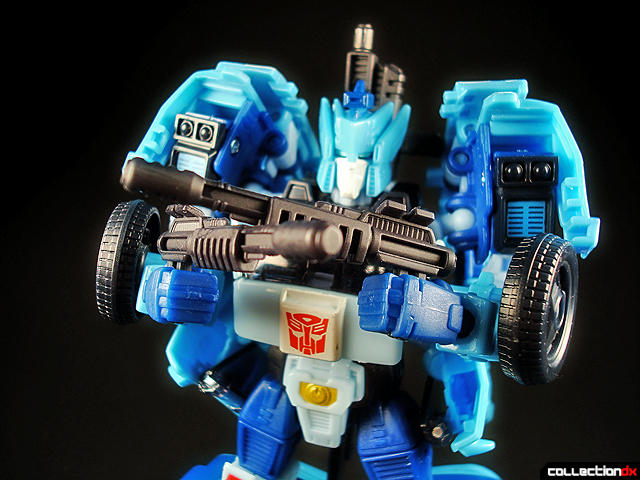 When his hands are full with the pistols, you can store his large rifle out back. 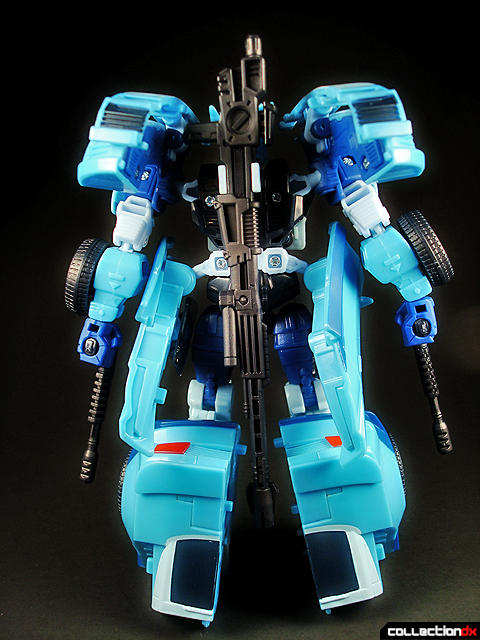 When the little guns are put away, the big guns come out and play. 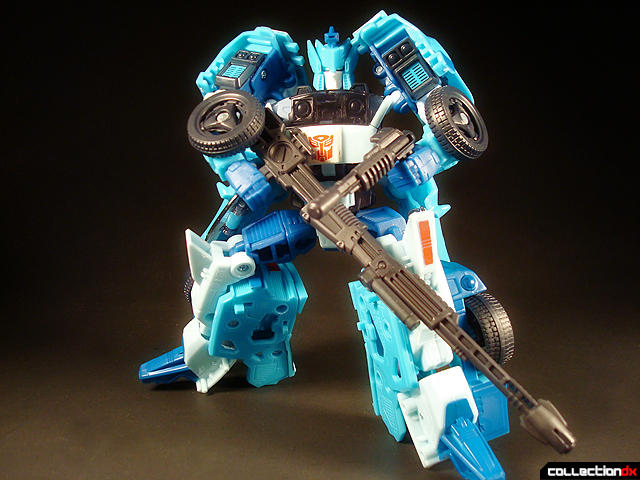 It's got a pull out handle so he can hold it with both hands. 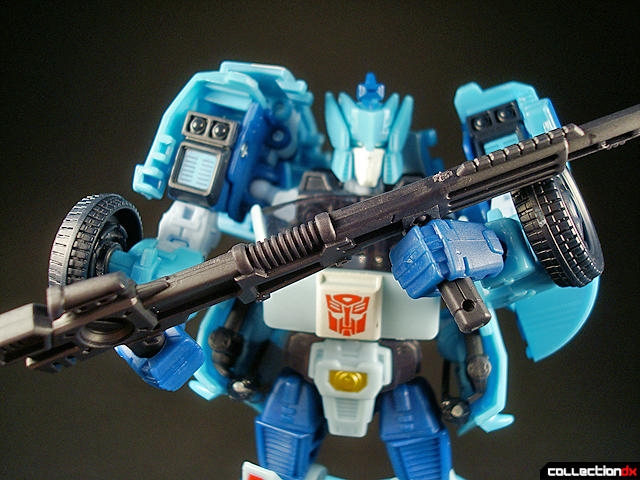 Another major mold difference between Drift and Blurr is the head. There are some hints of G1-ness with some elfishness thrown in. Its of a multi-piece design. 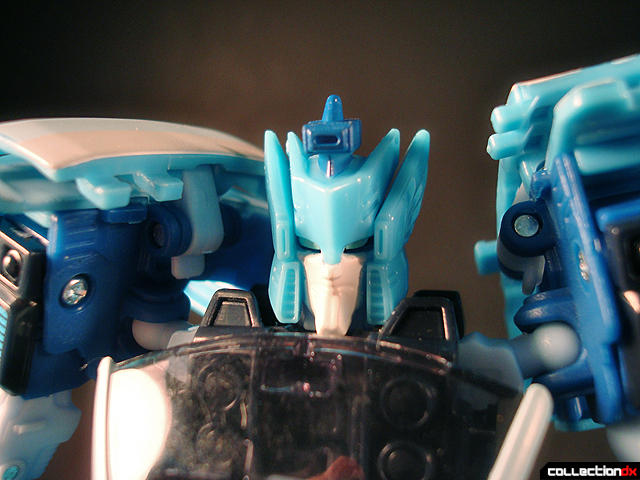 There isn't much paint detailing on the figure, but it was nice to see that they detailed some vents on the shoulder. On Drift, these vent details are replaced with Autobot insignias. 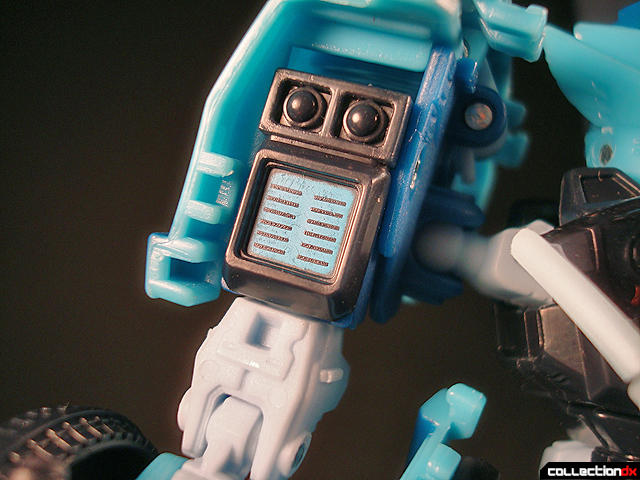 When standing side by side, we see that these are essentially the same exact figures overall. My favorite of the two is Blurr, although Drift tickles the race car driver in me since I used to drift professionally. I think Hasbro took a little more time to detail Blurr and make him more appealing. Drift has small swords instead of pistols. They store away just like Blurr's pistols. 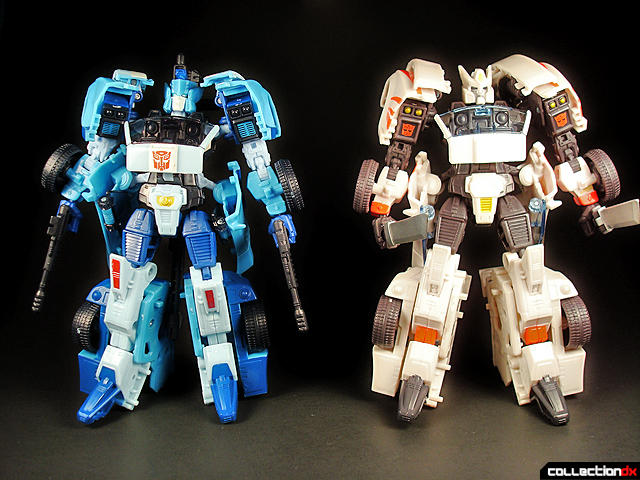 I hope you didn't mind the intrusion of Drift in Blurr's review, but many of you would probably like to make a decision between the two. This is one of my favorite transformations so far in the Generations lineup. Quality-wise the figures are really good. Joints on my examples were tight with the loosest being the hips, but not to an annoying extent. Plastic is great, lenses are clear and paint apps are OK. It really comes down to what appeals to you visually and what character you like. My favorite of the two has to be Blurr with his better color scheme. Although you can't blame me for liking Drift's name more.

Hasbro's Reveal the Shield lineup is coming soon, so get these while you can.

7 comments posted
I already have Drift but I

I already have Drift but I need this guy too.

And I rarely go for repaints/remolds if I have one version of a figure I like but sometimes they do such a good job on a figure you'll want it again.

I agree, which is why I have both. I actually had drift for a couple of months, but it wasn't til I got Blurr that I decided to take out Drift for comparison. It really stands out on my shelf amongst all the other TFs.

Picked this guy up just last week. Fun, but I'm having trouble transforming him back into vehicle mode. It's tricky.

I really like the weapon storage. That's a huge plus on any figure of this type for me. As a small bonus, the two pistols can be combined with the long gun to form a tripod. Pretty nifty!

Nice, I didnt know about the tripod feature, I will have to check it out!

Yeah, the bi-pod feature is pretty neat and if you get it just right, you can actually get Blurr in a kneeling pose. Although personally I prefer to flip the guns around to the front so all three barrels are pointing forward. My friends and I like to call it the "SUPERGUN".

Wow. I think this may actually be the first time that I pick the one with guns instead of the one with swords. I mean, this has been an ages old decision! I always found the one with a sword and tried to get it. This time though....man, those guns are awesome! I mean, Drift is still cool, but Blurr just has a certain something. Not sure what.

And I love drift's color, it's not white, it's more like pearl or something, you can really see the difference when you put it next to Red Alert or another white character. I also love the "samurai-esque" head and the long sword is awesome but it tends to blend a lot.

Blurr is awesome too, but I don't know, there's something I don't like about the paint app.
Unlike Alexx, I usually go for big guns instead of swords, but my favorite has to be Drift this time.

And I don't go for repaints either, but i had to get both and pose them togheter, the mold is just awesome, the weapon storage, the clear pieces, the way the legs look, i really like this mold.

Also I usually collect diecast figures, but latelly i've started to like transformers again, I first got Red Alert two weeks ago, and now I got 9 of them (I got Breacher today), they are way cheaper than diecasts and some of them look really awesome on display.

Can't wait to get my hands on Kup, Scourge, Strafe and/or Perceptor.