Gowapper 5 Gordam is a, uh, series about a robot.  The Wikipedia entry makes the series sound crazy silly, and the Gordam robot is dumpy and goofy.  All I know is that the vintage toy was a Magnemo, so it gets a pass in my book.  Problem is that vintage Magnemo costs a fortune, and has a bewildering amount of not-really documented add-ons floating around, just like Jeeg in all his formats. 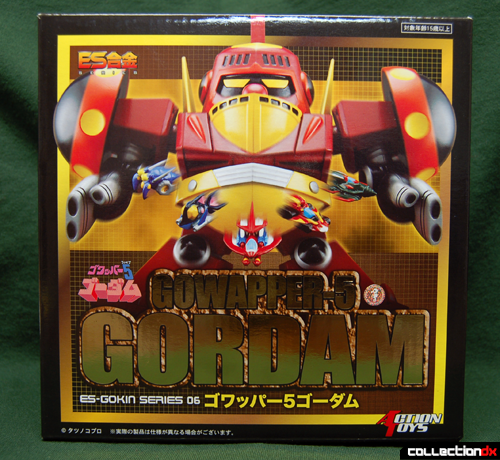 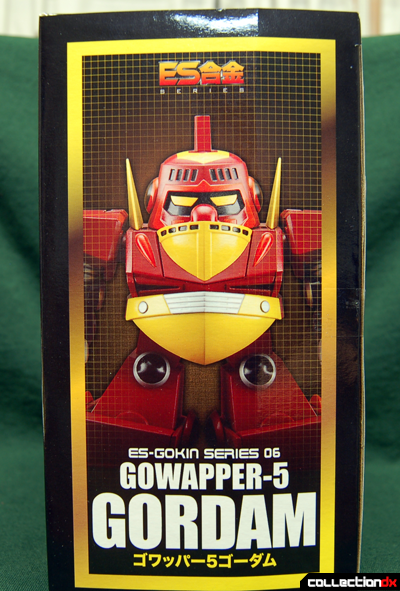 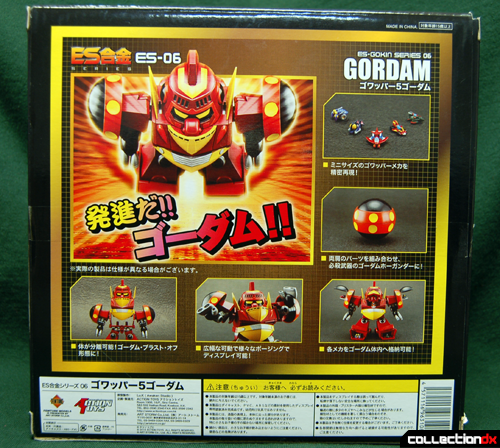 The ES Gokin Gordam comes in a slick, if slightly large box.  The whole thing is nicely done, with gold foil lettering on the front.  The photos are a bit ‘eh’, but functional.  I really miss the days where robot packaging had specially-painted artwork.  The toy comes in a two-level vacuum tray affair; one level holds the toy and few accessories, the other holds the stand parts. 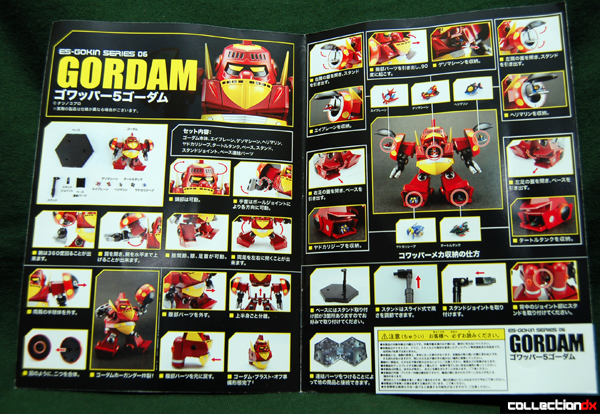 A nicely printed instruction manual includes confusing information on only some of the features (we’ll get to that) of the toy, with no English printing. 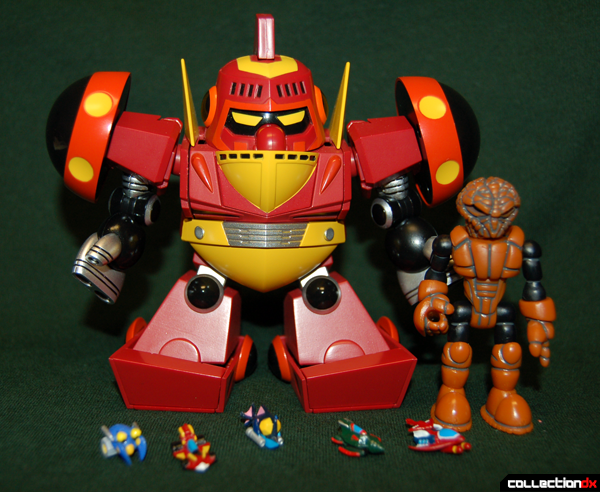 Gordam comes out of the spacious vacuum tray safe and sound, ready for action.  The mohawk on the head slides back into position, I believe both for the sake of fitting in the box, and for some features not discussed in the box.  Standing next to a Glyos figure, you can see that Gordam stands around four inches tall, but is wide, bulky, and chunky.  Accessories are limited to the two sphere-half pod things that mount on the shoulders, and five really small, sharply painted PVC mini-vehicles. 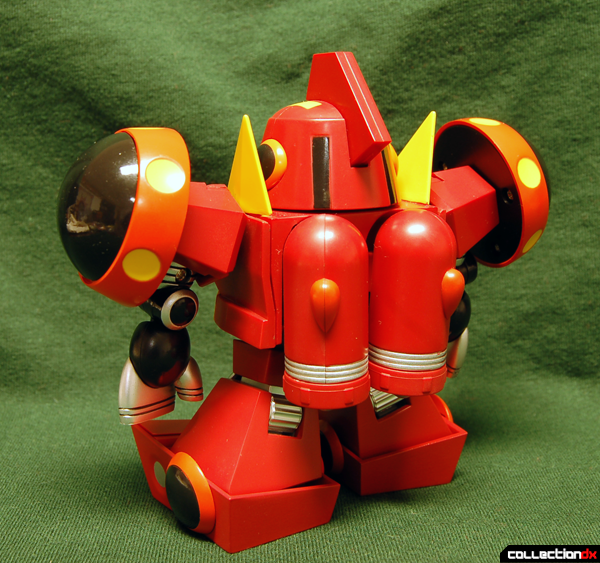 Gordam is made from hard plastic with a matte finish and semi-gloss painted details, with a good amount of diecast metal.  The main part of the feet, as well as the huge lower legs, and some part of the torso are all metal with a matte finish that perfectly matches the plastic, avoiding what is usually a huge sticking point for me.  The metal lower extremities give Gordam rock-solid balance and great heft.  The only PVC parts on Gordam are the hands. 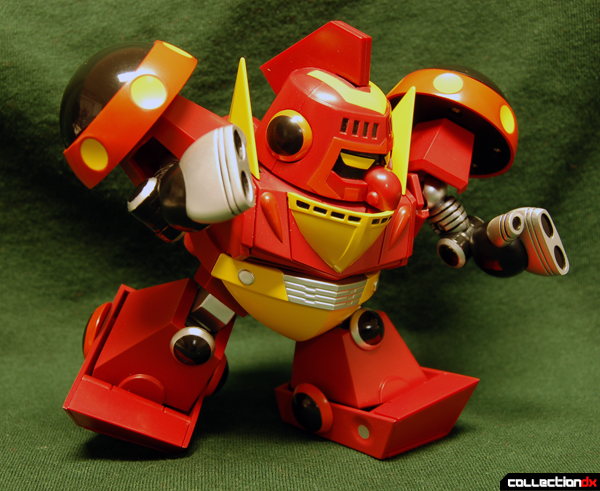 The articulation is awesome.  The shoulders, wrists, hips, and ankles are all nice, tight ball joints.  The knees ratchet nicely, and the shoulder armor moves all over in order to not hinder the arms at all. 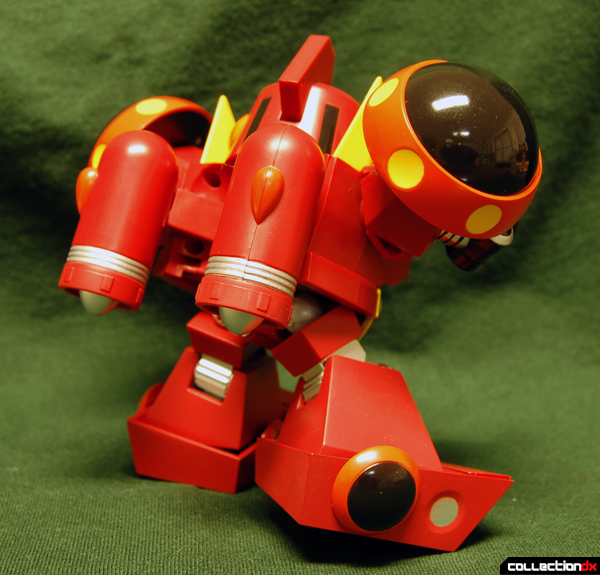 What is great about this toy is that, while most SD designs are an acquired taste, Gordam is so dumpy to begin with that he almost does not look SD as an SD toy.  The proportions are awesome, and Gordam looks spot-on! 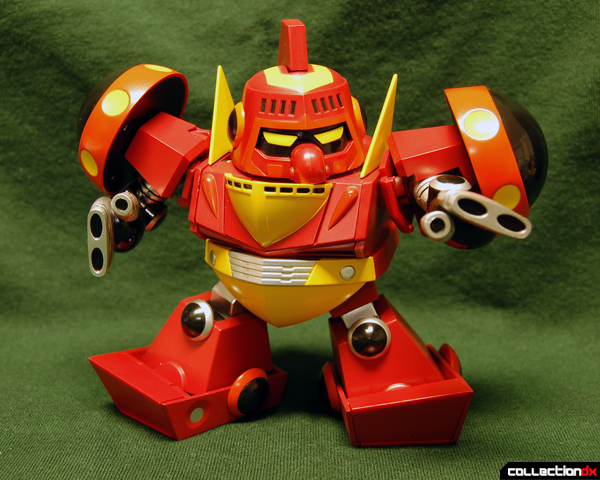 I love how the shoulders can be flared out with those big pods, making Gordam look really aggressive and mean, even though it is a totally dorky robot. 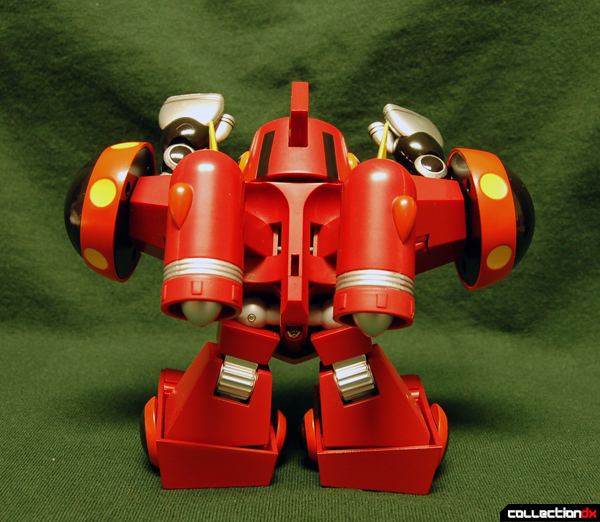 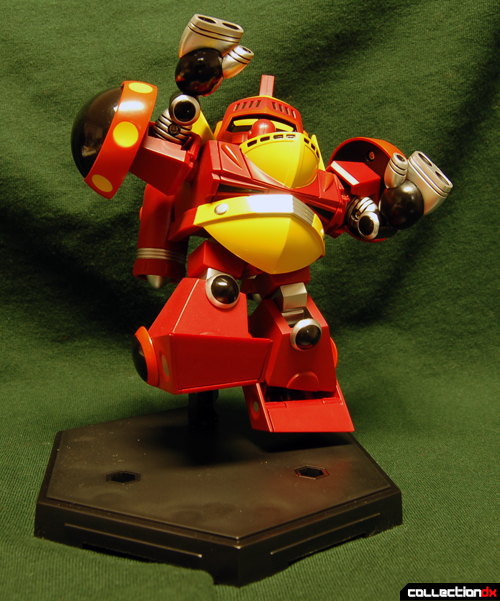 Gordam features deployable jet-pods that extend in a couple of directions, and feature a cutesy molded flame detail.  Gordam can be attached to the display stand, which comes with a peg-extender to fit in between the jet pods.  The stand is OK, but not amazing, and wobbles a bit with the heavy Gordam mid-flight.  The stand also comes with a clip that allows you to attach multiple ES Gokin bases together. 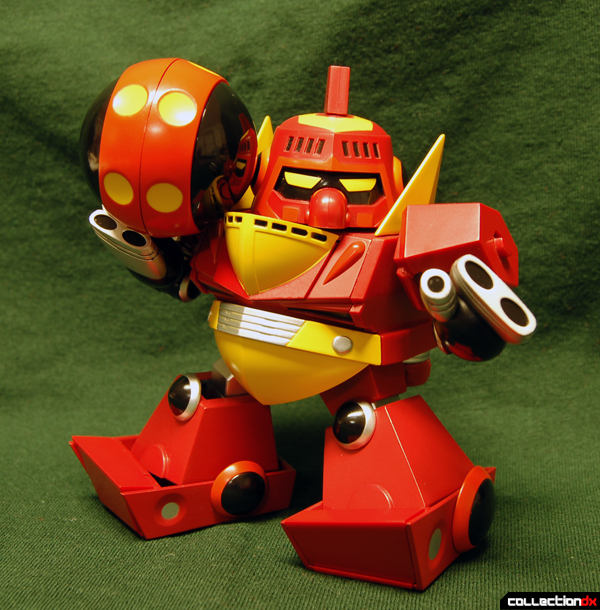 The pods on the shoulders attach securely, but can also be removed and hooked together to make some kind of spherical weapon.  In the instructions, Gordam is shown holding the ball in a physically impossible way. 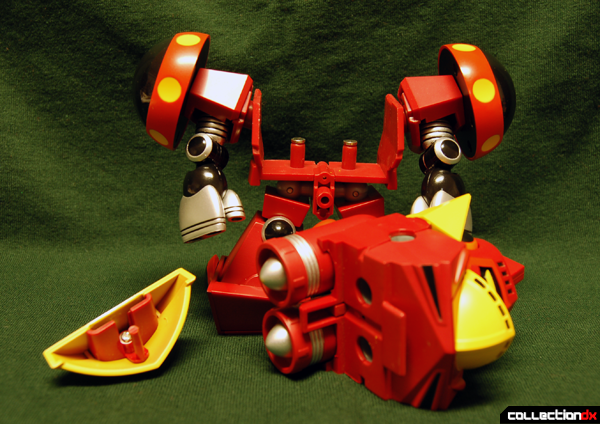 Gordam has one weird feature that serves no purpose for just the toy in the box.  The yellow waist piece pulls off, and the torso block slides up and off of the body.  The block features ‘hip’ holes and shoulder holes that are not used, but, weirdly enough, feature magnets inside the torso block!  One set of images released by Fewture has revealed that there are going to be add-on sets for Gordam that must transform him into other modes from the show, all hinging on this central torso block.  I assume this also explains why the mohawk is movable, as well as the ears being spring-loaded depressible.  I like the idea of having toys of whatever other modes Gordam had, since the format serves the design really well, but the idea of only being able to display one mode at a time without buying extra base figures really turns me off.  I’d rather each box were a stand-alone affair, even if they all came with the same torso block.  I suppose I should just be thankful that they are all separate boxed items, so I can just enjoy Gordam by itself.

Remember those five mini-vehicles from the first photo?  I have no idea what their deal is, because I have never seen the show.  We have… 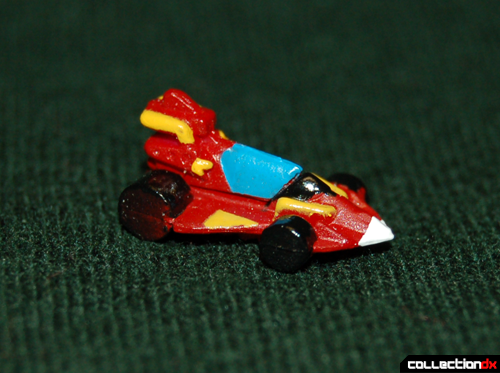 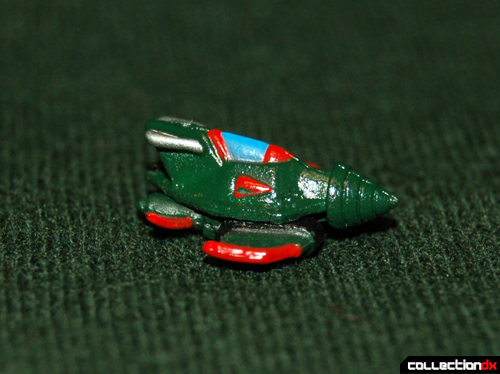 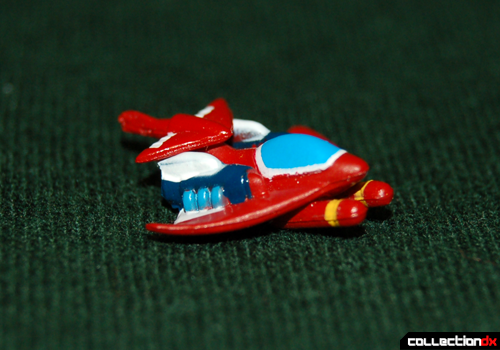 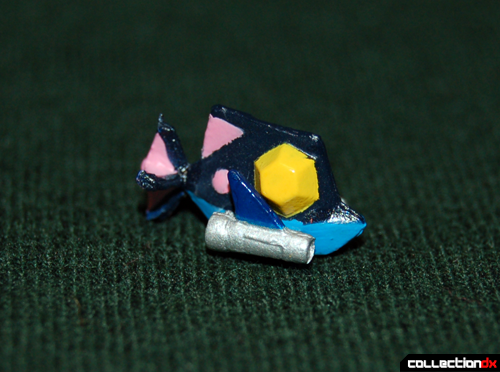 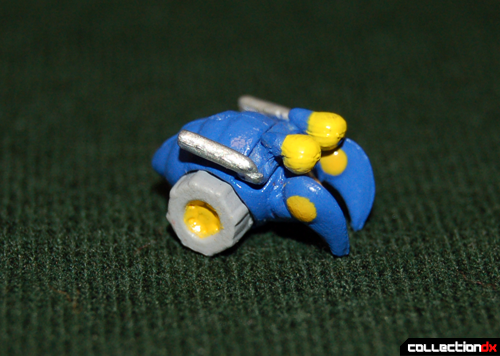 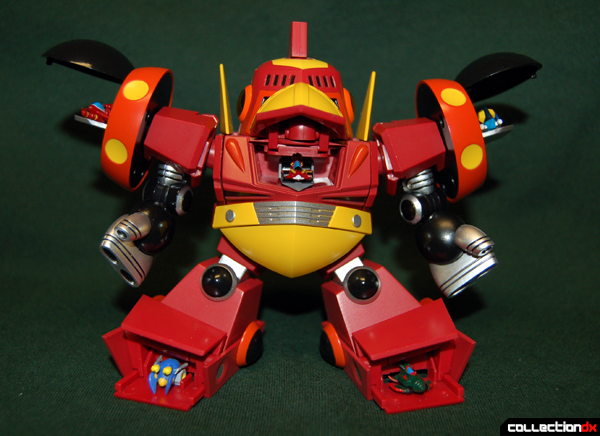 They are actually really neat; however, and dock into specific spots on Gordam and can be stored on the figure while playing with it.  Each docks in to a specific spot, and those docks can extend or deploy to make it look like the ships are ready for launch.  They all peg in nice and solidly, except for the crab tank thing in the right foot, which is a little loose in its slot, and flops around and can slightly hinder the ankle movement.  Not a big deal, but annoying when all of the other vehicles fit in rock solid and do not hinder anything.  I am a sucker for playset-type figures like Metroplex from Transformers, so being able to store and display all the mini ships in Gordam really appeals to me.

I do not know anything at all about Gowapper-5 Gordam, but this toy is fantastic.  The finish is immaculate Fewture standard.  The articulation is great, the proportions really work for Gordam, and all the little ships make for a neat feature that does not take away anything from the base figure.  As a stand-alone box, Gordam is a blast, with no annoying accessories to keep aside.  I’m glad whatever accessories that are coming are being sold separately, so I can enjoy Gordam as just a great robot figure which looks spunky, aggressive, and classic!

Again, todays review sample was provided to us by HobbyLink Japan.  If you dig the review please check them out for this item and many other cool gokin! 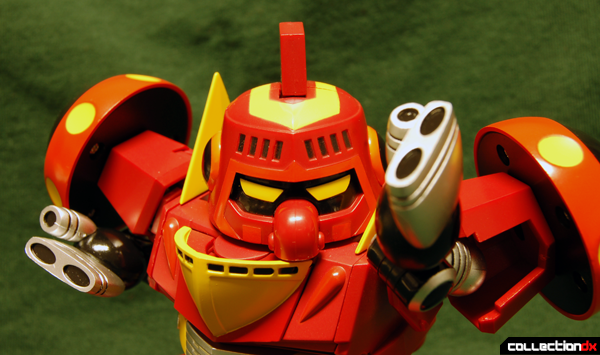 Wow this set is awesome. Totally blown away by the box and execution of the figure itself. He's way dorky but that's very much what makes this figure cool. Not sure if ill be getting the add ons. Sounds to complicated. Great review and photos. The green background reall works with the figures color too. Makes it fun

He looks great. I would have flipped out about this a few years ago, when SD gundam was on US shelves and I was really into the SD thing. Is this the same series that gave us that awesome SD Jeeg?