Getter 2 comes in a Getter-Fabulous box as is the norm with these ES Gokins. The word "Getter" is done in foil. Real pimp. In fact Getter 2 is very much dressed like a 70's pimp. 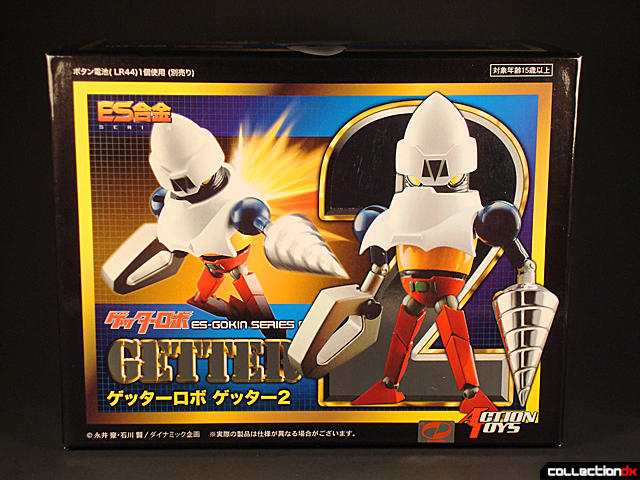 The back of the box is just as fancy with all the bright photos and graphics with a bunch of Japanese I can't read. 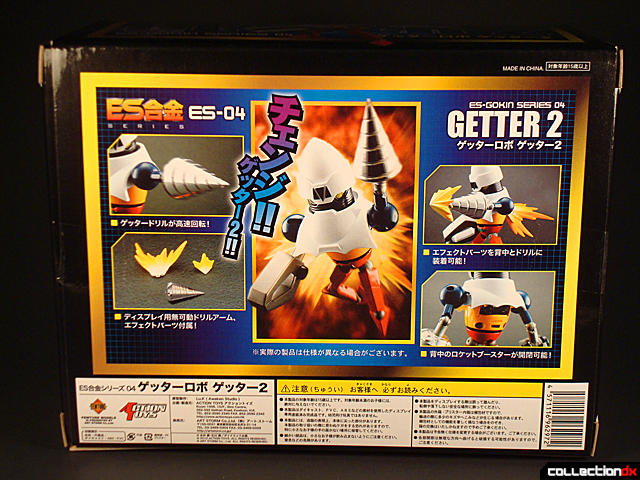 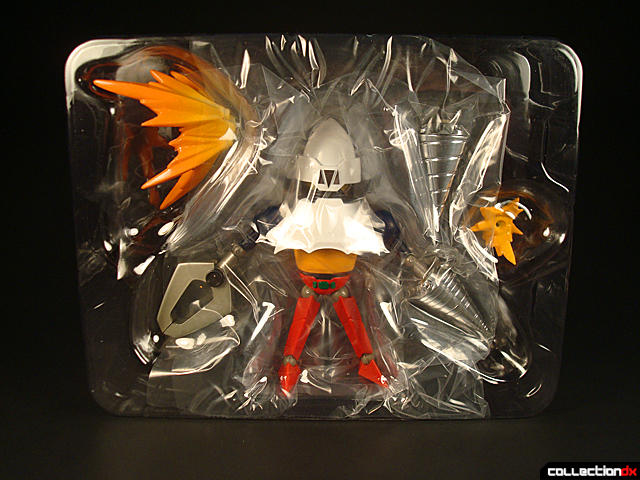 Wow, this figure is pretty tiny. It's got some really teeny legs. Is that bad? Not really. It's still a nice figure. If your only other ES Gokin is Goshogun, you may be surprised at the size difference. The figure measures in at about 110mm. Diecast is limited to the white "poncho" and the torso. The rest of the figure is made out of ABS and pixie dust... wait, no, just ABS. 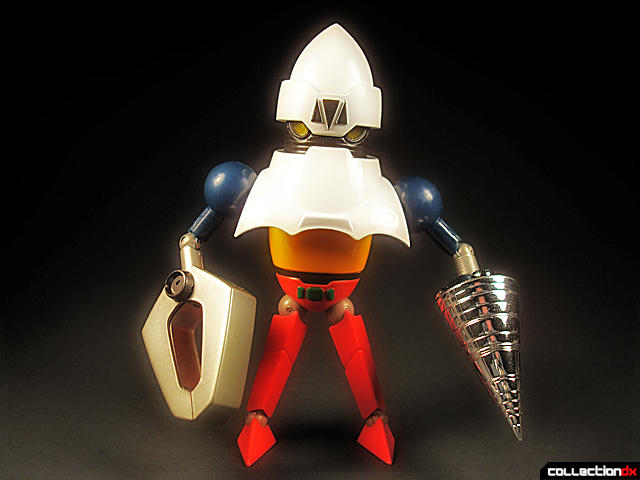 The back of the figure is almost exactly like the front. Except it's the back. 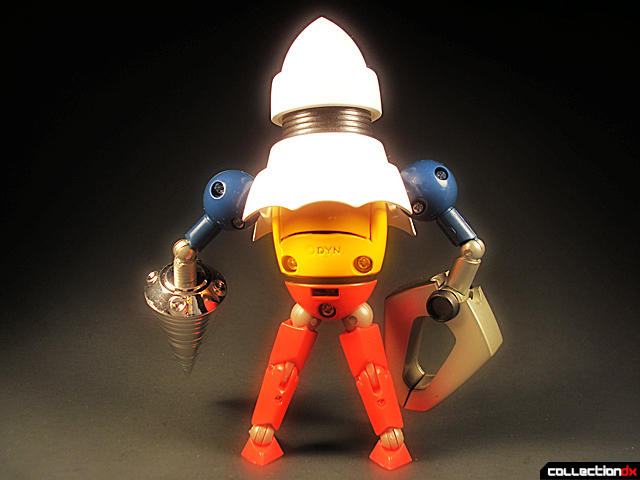 As simple as this figure is, it has some decent articulation. I love how they implemented a chest joint.

The head is on a ball joint. Here is the range of the vertical movement of the joint.

His claw hand opens and closes to your hearts content. 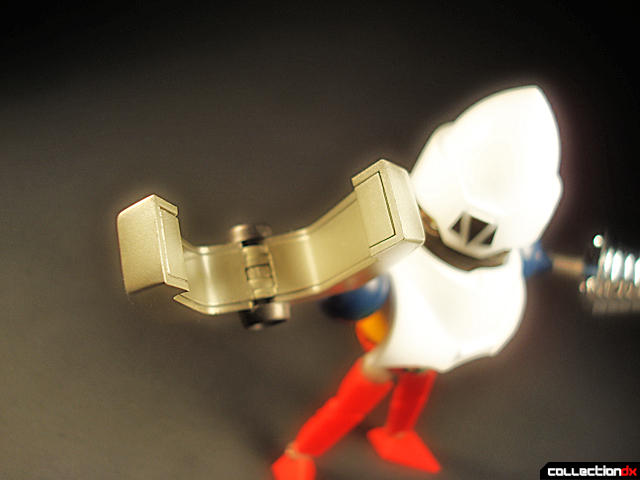 The legs allow a good range of movement as they are well articulated. The ankles, knees and upper thigh have a good range although the upper thigh gets limited at times due to the point at the top of the leg. Speaking of the legs, they don't look as "high-end" as the rest of the figure because they are molded in color instead of painted, but they sure are fun to pose. 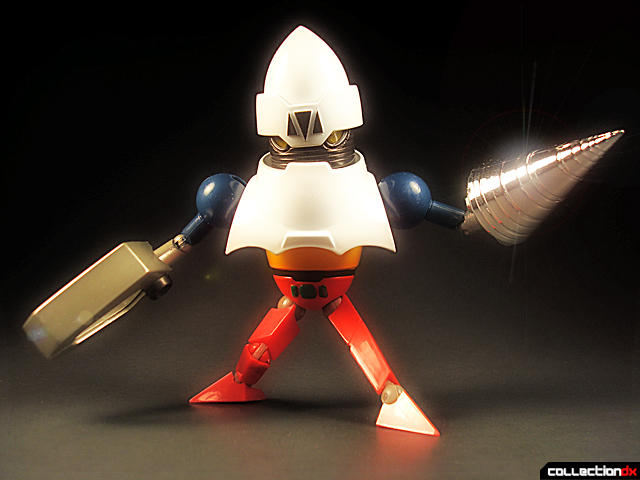 If you turn Getter 2 around, you will find nothing. However there is a panel on his back. Open it up and you will find a pair of boosters! 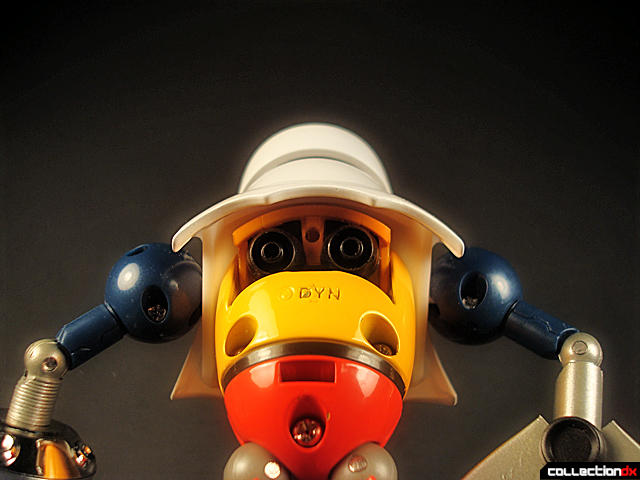 If you want to give the boosters a blast-effect, the included PVC piece is just what the doctor ordered. It's a little on the roundish/soft side, but it does the job. I wish it would have looked more like the one on the front of the box. 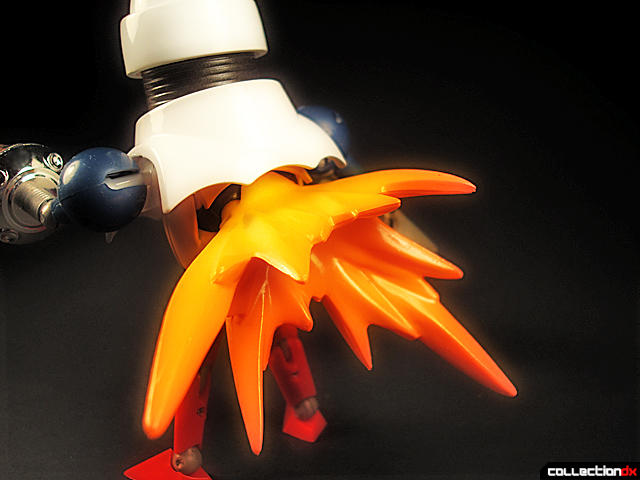 There is even an included PVC effect piece for the tip of the drill. 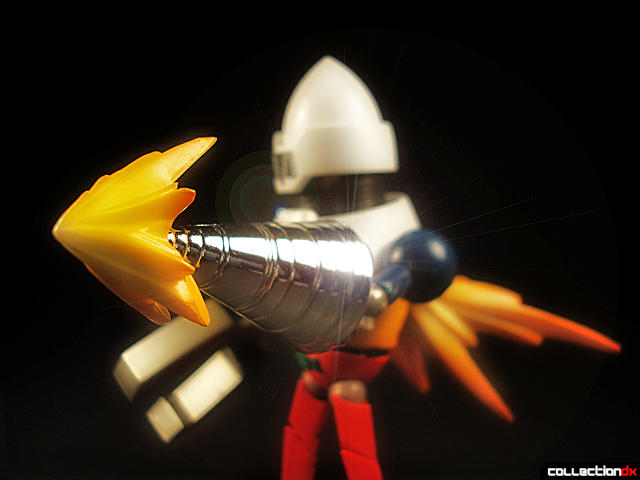 I saved the cool gimmick for last. He comes with an alternate powered drill. 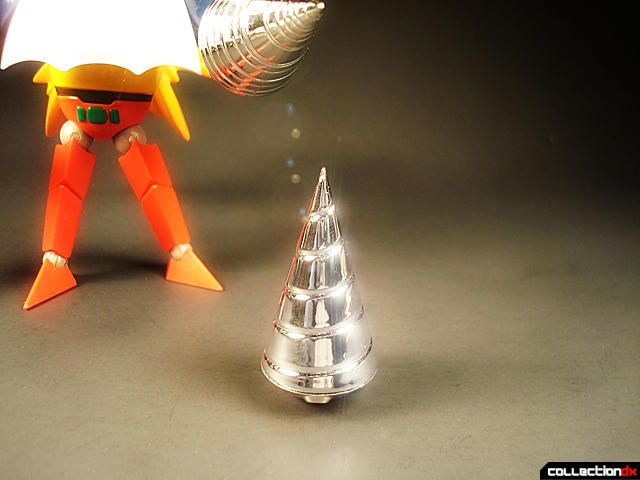 Yup, I said powered. So if you got some button type batteries, you get to take advantage of this gimmick. 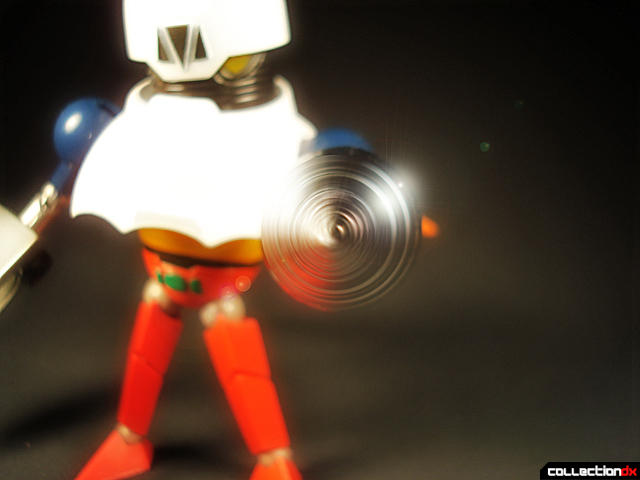 Overall it's not one of the stronger ES Gokins in my opinion and that may be due to it's simplicity. The powered drill scored lots of points with me. I love how they are giving each figure battery powered gimmicks. My specimen had a few paint chips around the screw holes probably due to a sloppy factory worker, but for the most part, the detailing is well done. All the releases so far have cemented me as a fan of this line. Can't wait to see what they do with Getter 3 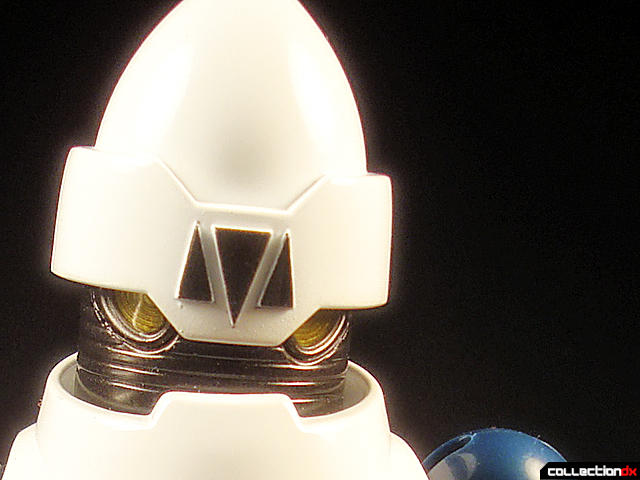 Powered drill? If they can do it, I can do it.

Powered Drill? That is insane! How fast does it spin though?

Thats right folks, a powered drill. If you search youtube "ES Getter 2" there is a couple of videos showing off the gimmick. It spins at a decent speed. Its all self contained in the drill. Really really cool

Have to say a big piece of me loves these babies, great reviews BTW...but the small kiddish theme keeps them out of my collection...which is good because I can ill afford starting another branch of fewture stuff:)

yeah believe me, I couldnt stand SD figures but I came to realize my assortment of SD figures was growing...kinda creeped up on me. Now I'm stuck! Cant get into Gundam SD though

I have a few question in this line... before i buy it... already saw some in a place i frequent

1. how many figures have been release so far and have been announced... I also heard bad stuff about this line as it gets delayed... allot!

3. is this line a long one? like maybe last for about a few years? like chogokin... cause its a far lot of anime robots that they can make.

4.saw your reviews so far so goo... but what about jeegs head is it removable? and why getters dont get the 3 jets?

Hi, Jeeg's head is removable. Unfortunately I have no intel to answer your other questions.