A funny thing happened at the recent "Micro Summit" when I was checking out JoshB's collection. My wife actually sincerely liked the Chogokin Drossel. She must have brought it up in conversation about every other day which is strange since she is not a collector. Nor does she have to be to like it, after all it's cutesy and Disney related. Unfortunately the Chogokin Drossel was sold out. Ebay was out of the question since they were waaay marked up. She then ran into something much cuter while doing a Drossel search online... Needless to say, I did not mind helping her acquire this item. This is the Nendoroid version which is basically a super deformed version of Drossel. Here you see the window box which shows Drossel and all her accessories. The box is also windowed on the sides although there is really nothing to see clearly form the sides. 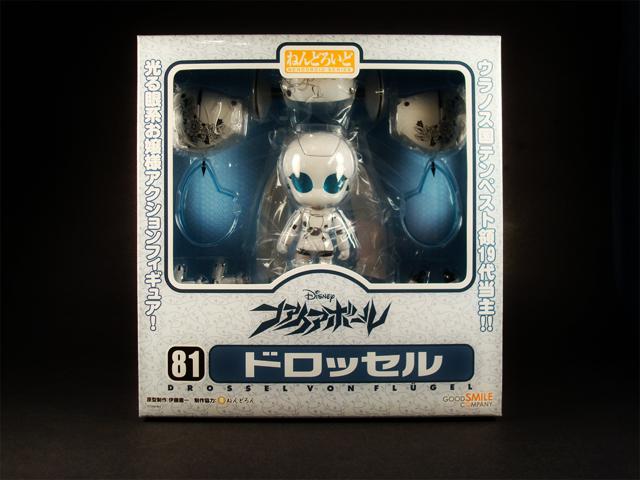 Once out of the box, you will notice the figure is very glossy. Paint application on mine is good, tampo markings are sharp but some of the smaller non tampo paint details are understandably not so sharp. The included clear stand comes in very handy because she does not like to stand on her own. The stand is a little fidgety around the waist, but they molded a little seat to aid in supporting her. 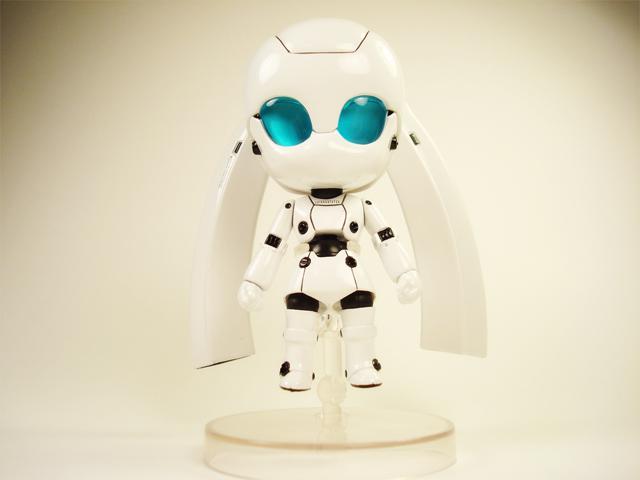 On the backside, you can see the detailed markings that have been applied. Some markings were too small to photograph, but were surprisingly sharp and legible. 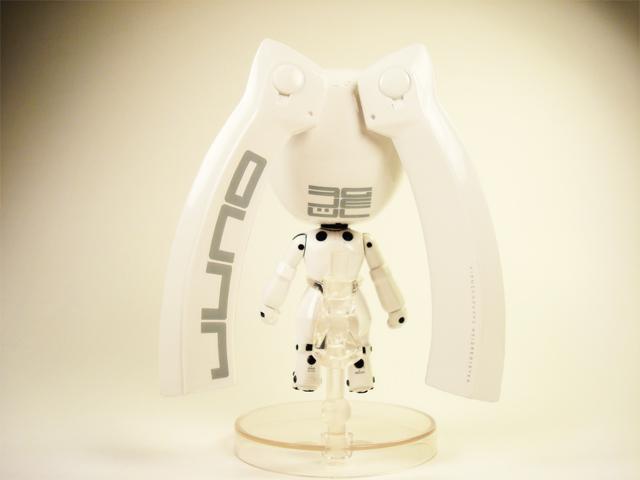 One cool feature of this figure is it's light-up eyes. They have a nice, soft, even glow. Nothing like the Laser beam eyes of the Chogokin version. 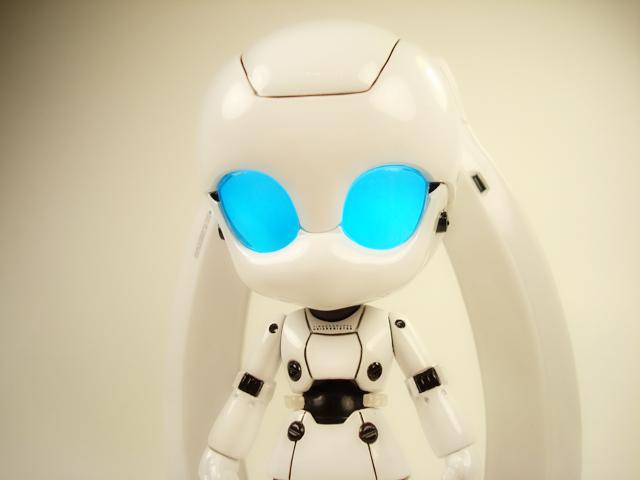 To get the LED feature to work, you need to pop off the back of the head and remove a battery tab. Fortunately this is the last time you will open the head until the battery runs out because the switch is on the outside on this version. You can see the switch at the bottom of the head and its simple electronic setup. 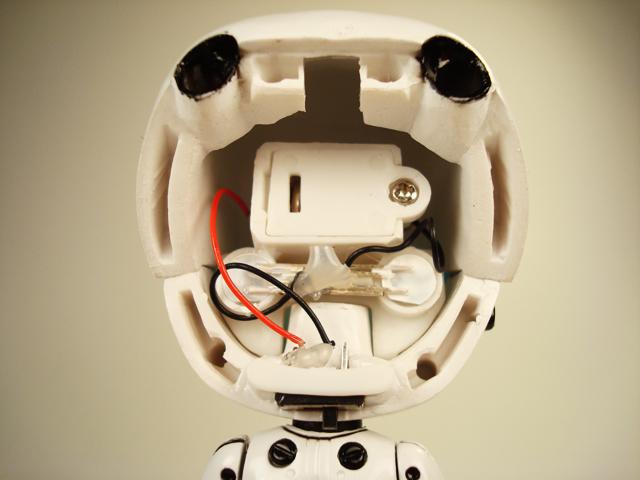 She comes with a pair of headphones called "Belinda" which simply wrap around her head. No head swapping here folks, you can retain the light-up feature while using the optional head pieces! 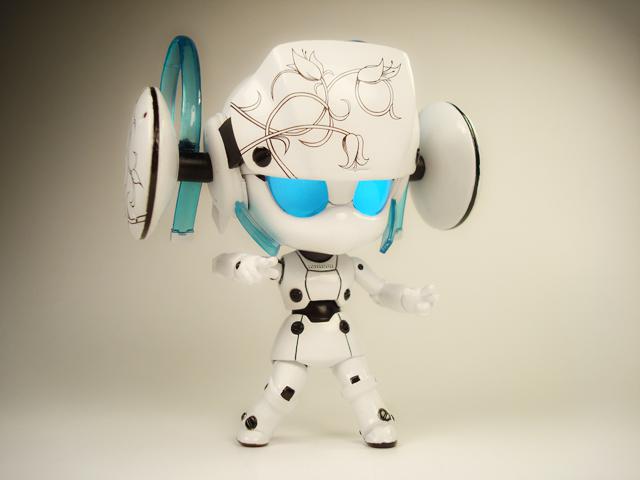 Here second head piece is called "Obruchev". What's cool about this version is that the wings fold out from the head piece and the boosters are built in. Fitting this on the head requires a special block piece that plugs into the back of the head by removing the "ears" 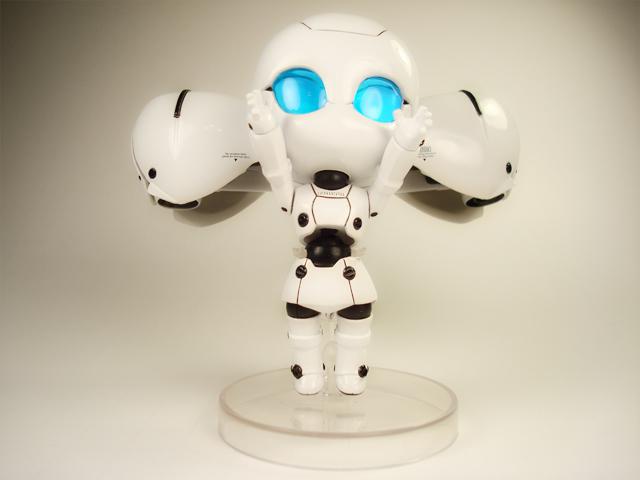 To pop out the flight unit, there is a hidden button on each side of the interior of the head piece which pops the flight unit out. Its disguised as part of the interior detail which is nice. Since the instructions were also cleverly hidden in the box, I didnt read them. I failed to find the button and instead resorted to pulling them out by hand. This in turn cause one of the latches to get weak and not stay in anymore. After a tiny bit of super glue, shes good as new. In other words no matter how simple a figure looks, it usually a good idea to check out the instructions to avoid messing up your toy. So again, just push the button to pop the flight unit out and fold out the wings. Here she is in all her flying glory. 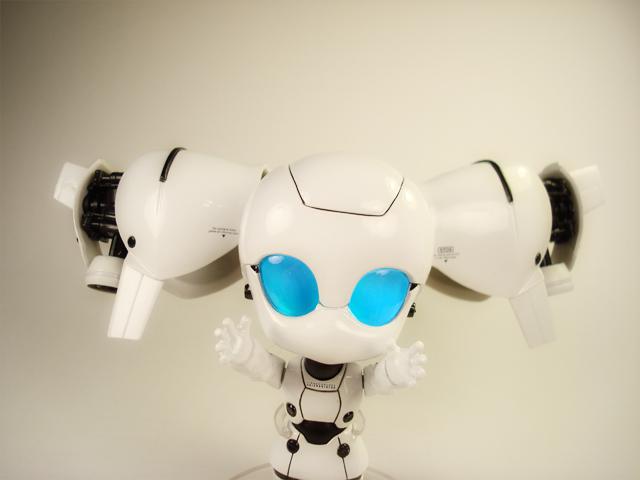 Check out the floral design on the back of here flight unit head piece. 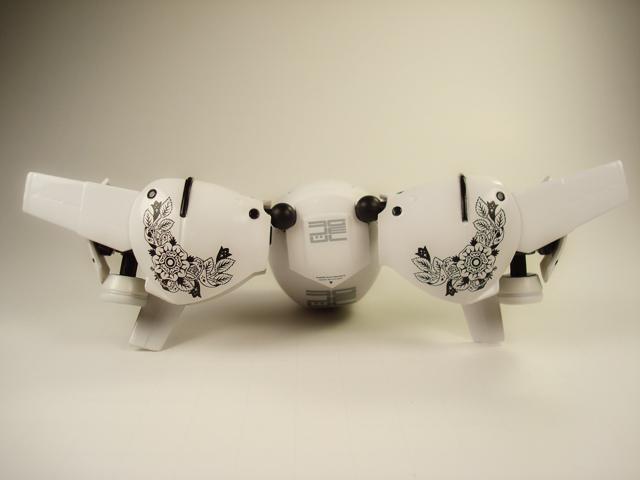 So lets get into its construction. The figure is constructed solid PVC and ABS. Curiously it has Revoltech style joints but without the ratchets. Each joint has a smile which hints on the manufacturer's name: Good Smile Company. These joints are found wherever there are joints except for the shoulders. The arms simply plug in with tabs! 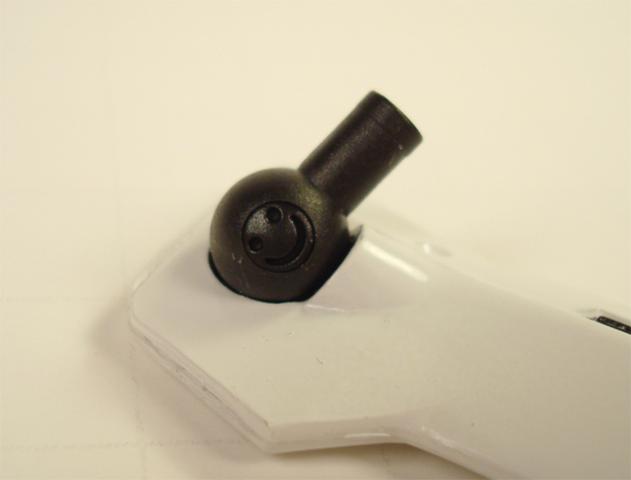 Here you can see how the arms are designed to attach with tabs as well as the hands. Off to the left you can see the block piece which attaches to the back of the head to hold the flight unit. The alternate legs come with their own joints which is nice. 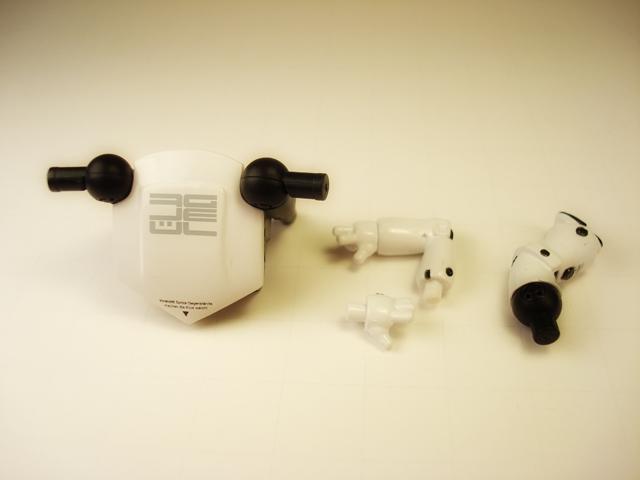 My biggest complaint is that there are no elbow nor knee joints. The set come with alternate legs and arms that you need to switch around to achieve your desired pose. Very annoying if you plan on playing with it. It also has alternate hands which are also held on with plugs. In their effort to achieve a simple design, they compromised real time articulation. Either that or it was a cost cutting measure on an already pricey figure. The lack of shoulders also kills articulation. Most of the poses you want can be had by swapping arms and legs but seriously, $40 and you have to parts swap like crazy? For the price of two you can have a crazy awesome diecast version. On the other hand, you can change head gear and retain the LED feature, which the Chogokin can't brag about. The switch is on the outside and not noticeable. The flight unit is built in and requires no assembly. You also have the whole deformed thing going on if you're into that. My wife thinks it's a baby Drossel. Overall I like it and my wife loves it. That's what it really came down to for me. Fortunately my persistence paid off and I found a Chogokin Drossel for her too without paying "teh market" price. 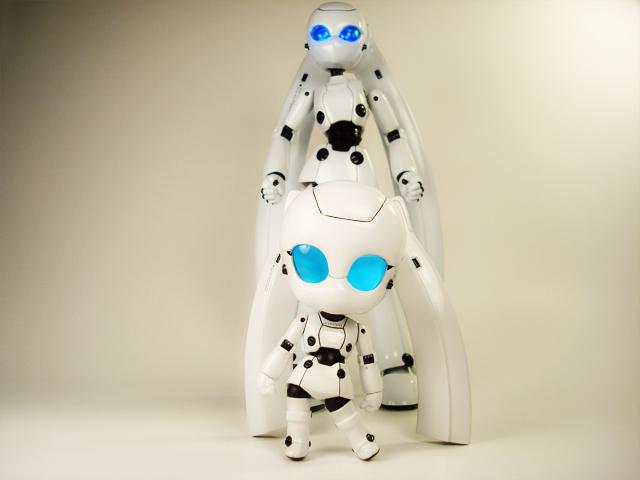 you know "wife" equals don't want to admit I like the darn thing...just kidding nice review...this character getting lots of play here...bought the bandai version because of it...and least "offensive" of the female chogokin out there...(mazinger angels...)

Well this one ended up being real cool, but really it was mainly for my wife. The Chogokin however, I admit I would definitely buy for myself, its awesome. Almost didn't want to give her that one!

these nendoroids are not meant to have great articulation the are mainly display pieces that look great and can be brought around anytime for a great photo shoot. and being an sd design, there is no way to place joints on this thing

I'm assuming this is typical of the Nendroid series. But If size is why it doesn't have joints, that just doesn't fly with me. I've seen much smaller figures (even the crappy quartich avatar figure which is small has articulation) But if it is designed this way because of its collectible/display nature, then that would make more sense. I guess I expected elbow and knee joints for a $40 figure especially one based on a robot. Still I like it a lot, its a nice piece. LED feature is great.