With TRON LEGACY in theatres, I find it only fitting to review some more TRON toys.

First up we have CLU’s Lightcycle. If you haven’t seen this on shelves much, it’s because it’s a WalMart exclusive.

Contrary to popular belief, it’s not a repaint; it’s an entirely new toy.

The box sports the same 3/d vision effect as the Sam’s Lightcycle. Look through the holes at the bottom, and see a stereoscopic image of a lightcycle. The box features the same “try me” feature as the other, and the similarities don’t end there. Take a look at the top of the box: 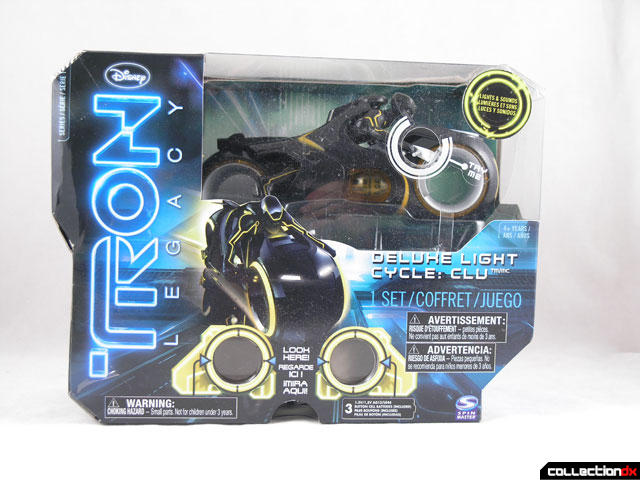 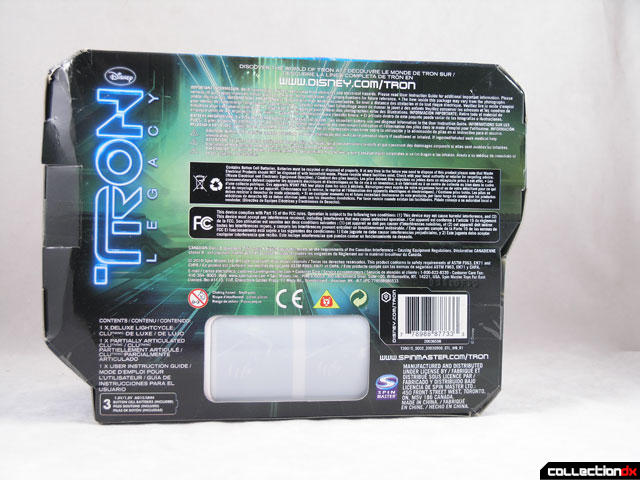 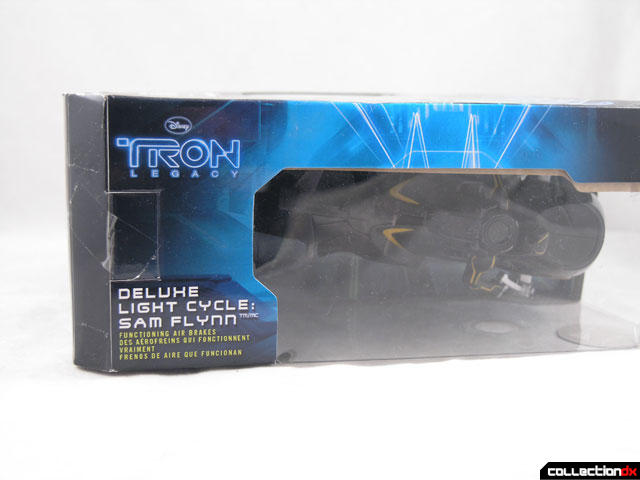 Notice anything different? It still says Sam Flynn Light Cycle. Just another example of the QC issues that plague this line.

Take the toy out and throw the box away. Seriously.

The Lightcycle features rubber tires and the same gear driven motor as the other one. The body of the cycle is an entirely new sculpt, this time wrapping around the driver. 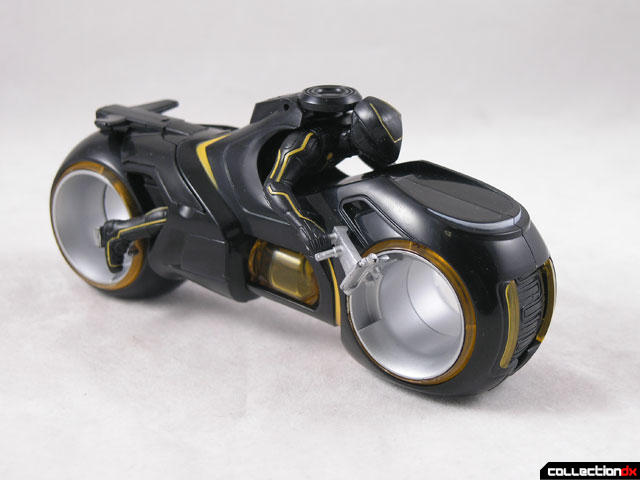 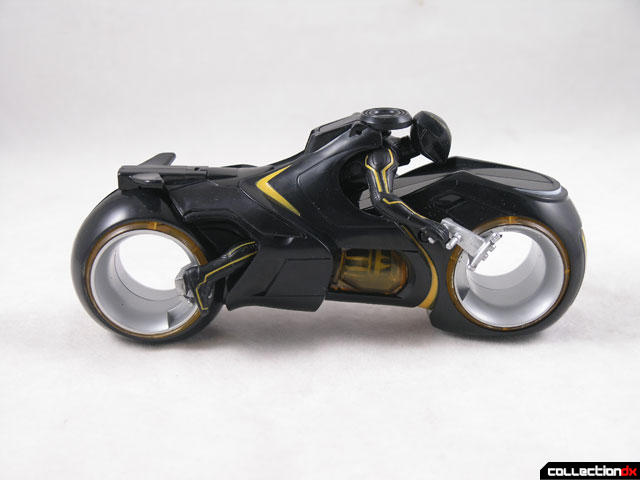 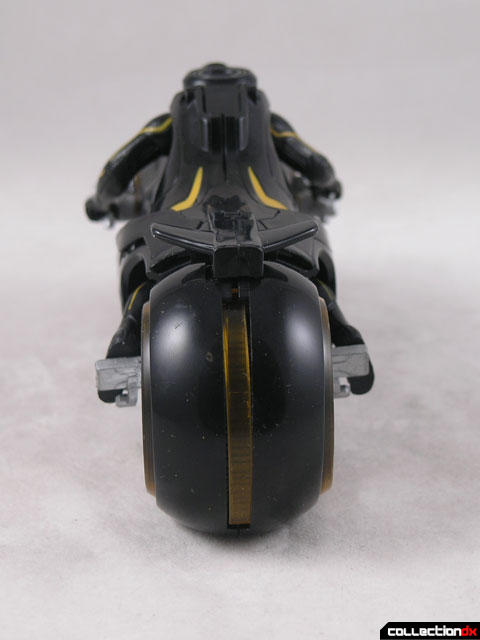 The toy comes with a non-poseable clue figure that fills the spot well enough. 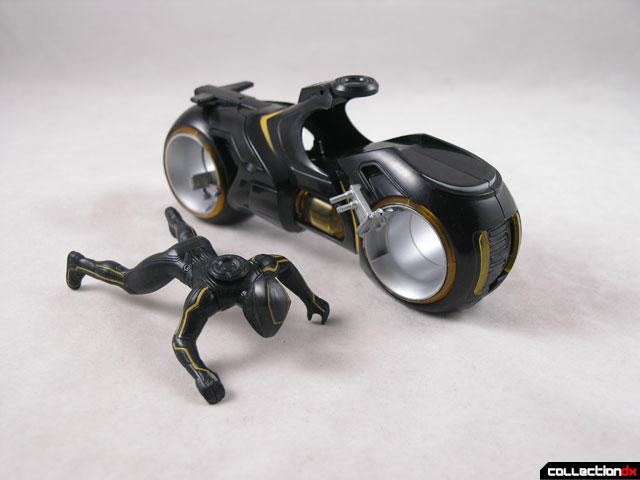 Other gimmicks on the vehicle include the three air brakes on back, the middle one being a bitch to get open, and the others, a bitch to stay closed once you open them. 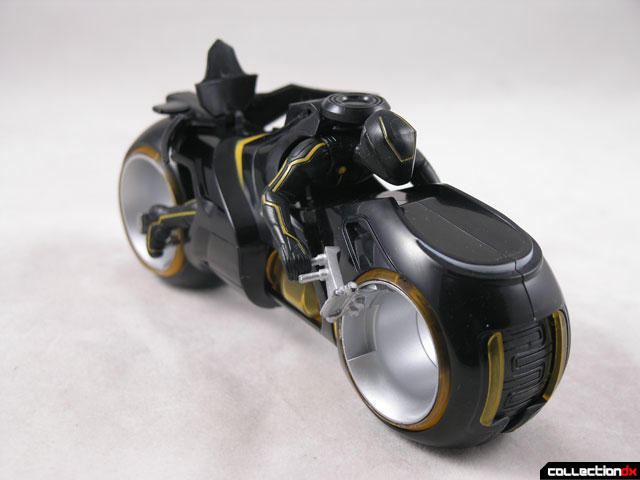 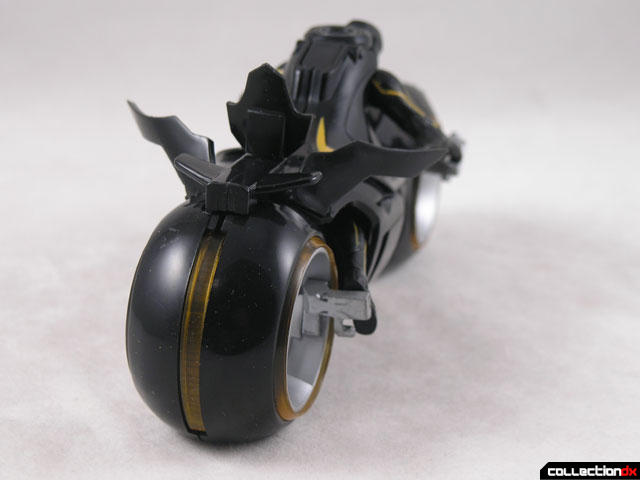 Of course, the vehicle lights up. Underneath the vehicle is a three-position switch for on / off / try-me. In play, the switch should be set in the on position. This causes the lights and sound to activate when you move the figure. A different set of lights and sound are supposed to activate when you insert a real figure that presses against a trigger on the seat. However, I could not get any additional lights or sound to activate. 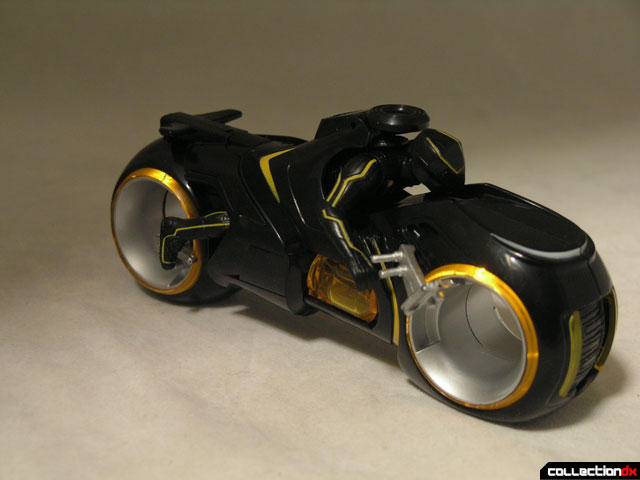 I had the misfortune of buying a CLU figure so that I could try it with this vehicle. This was not a fun process. The idea behind the gimmick was solid, but something got lost between the board room and the toy. 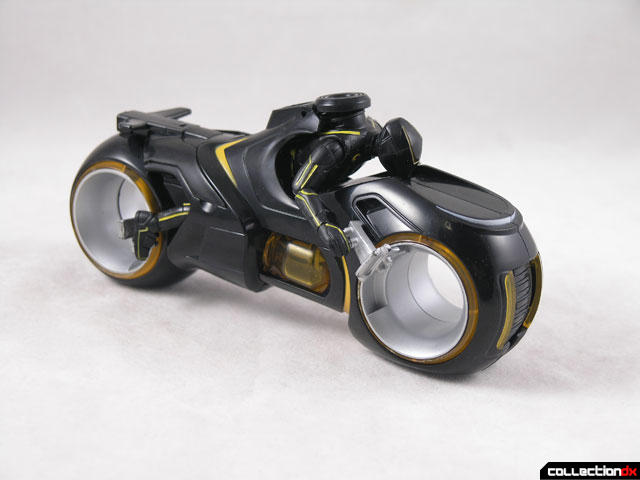 CLU barely fits in the space provided, and limbs popped off each time I tried. The light button on the back of the CLU figure is supposed to rest underneath the pressable panel on the top of the cycle, but I could not get them to line up. 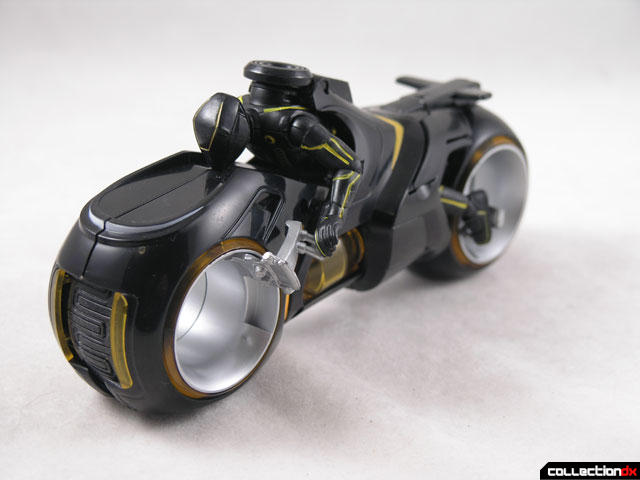 The placeholder figure has a removable helmet that is in a riding position, so I decided to swap it with CLU’s head as the instructions show. On my Rinzler figure, when I tried to move the head, it broke. Fortunately I had no problem removing or replacing the head. 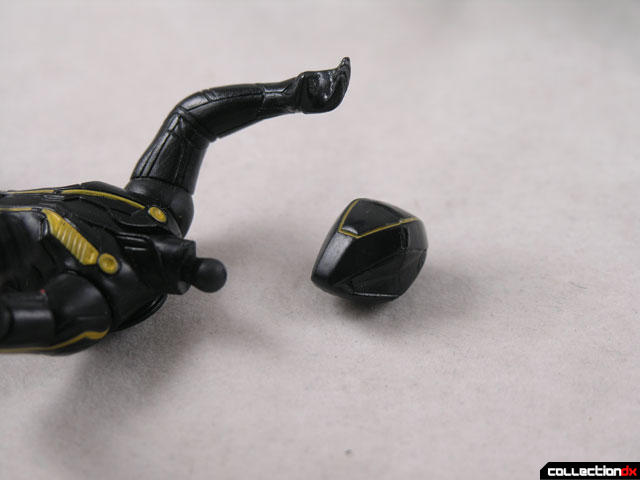 However, once on there, it looks like crap. The dummy figure has a tilted neck that makes it look like a natural pose, the poseable figure does not. He looks like he is staring down into the bike, as opposed to looking out in front of it. 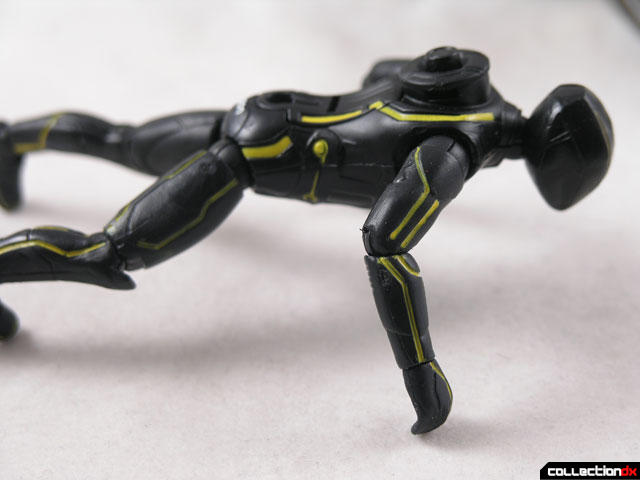 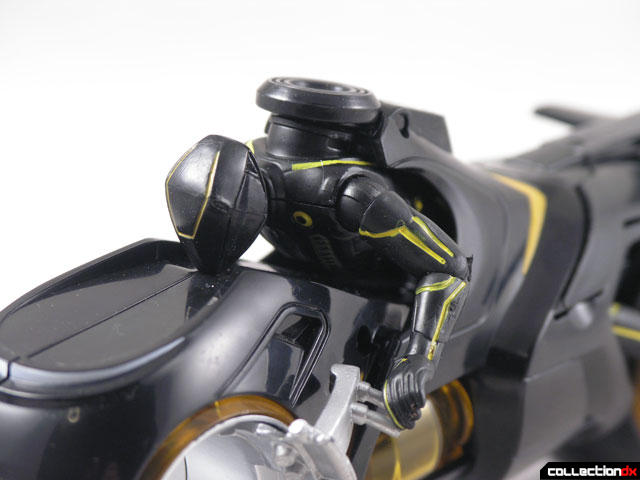 Despite the flaws with the sold-separately figure, I do kind of like the bike. With the dummy figure in place it looks great, and feels solid and fun.

Skip the figures, pick up the vehicles.

2 comments posted
Josh, will there be a

Josh, will there be a large-sized Recognizer? Or any new toys of the previous film?

Yeah, the figures aren't so great - but my sons love them. I have, of course, bought em most of the line. The recognizer carrying case isn't much but at least it's a toy reco and my 5 year old carries it everywhere with the 3 inch figs and die casts inside.

I figure it is practically my duty to buy these toys. TRON toys at retail! A few years ago it was beyond imagining. I hear the second wave of figures and vehicles are hitting shelves now, including Light Jets.