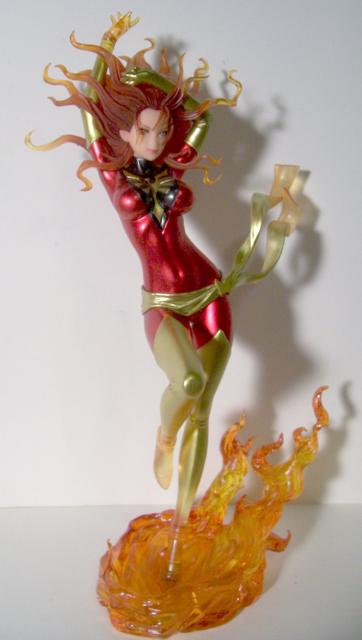 Character Background. Dark Phoenix is arguably the most popular character created during the famous Chris Claremont/John Byrne run of Marvel Comics’ Uncanny X-Men in the late 1970s/ early 1980s. Its become well known over the years as the "Dark Phoenix Saga"-and since its usually "required reading" for superohero comic book history, you can find collections of it pretty easily. 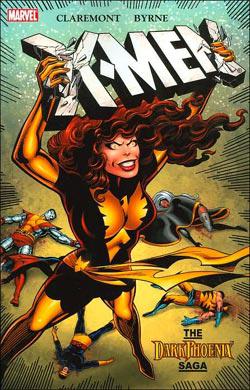 Dark Phoenix began as Jean Grey, a mutant with telekinetic abilities. She was one of the founding members of the original X-Men. For the sake of brevity, I’ll skip over the comic book continuity and simply say that during an escape from an orbital space station Grey acquires a tremendous boost in her power level that transforms her into Phoenix (in the green and yellow costume), the most powerful member of the X-Men. Phoenix is corrupted during a conflict with the Hellfire Club, an enemy of the X-Men and is transformed into Dark Phoenix (red and yellow costume). An entity that is so powerful, she devours a star and annihilates a whole civilization in her wake. 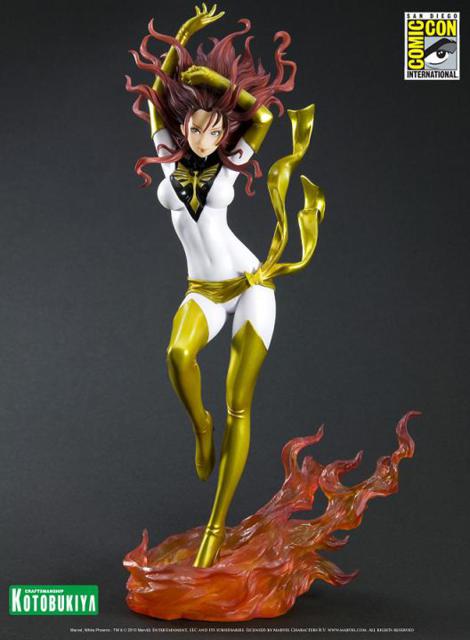 In addition to the Phoenix and Dark Phoenix color variants shown below, a special white-gold variant of Phoenix from the 2010 San Diego Comicon is also available.

Review. So, the Phoenix and Dark Phoenix statues are the same sculpt but with different colors. Dark Phoenix is the more striking of the two figures and so she will be the primary focus below but I'll jump back and forth where I think comparisons are appropriate.

The Bishoujo statues have a four color window box. 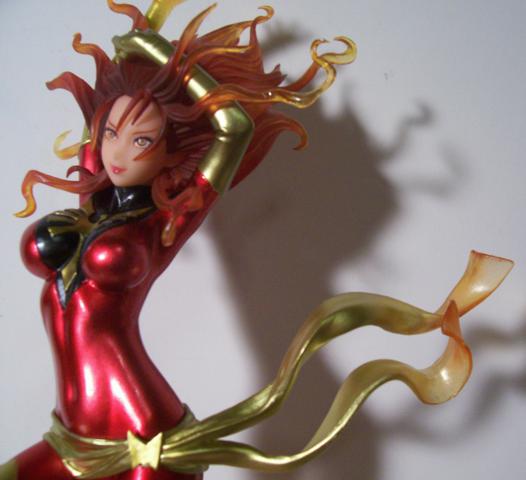 This is a statue with no posability and no cast-off parts. This statue sculpt is…wow! A good resemblance with all of the uh..enhanced reimagining needed for adding that “pretty girl” element. Plus the sculpt on the face really gives her some character that is consistent with what's shown in the comics. 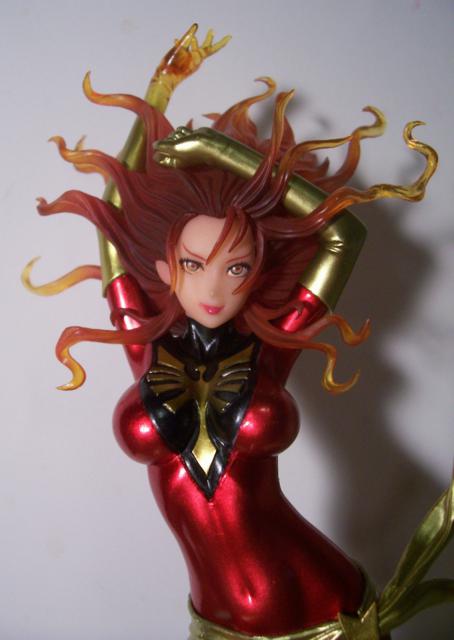 Details like her boots and hair look properly layered and not just glued on or attached. 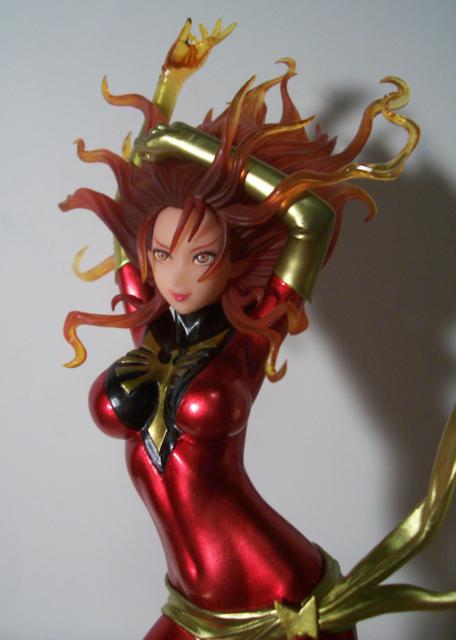 Generally speaking, I’m very impressed by the paint job. Very clean with no bleed or messy edges. Her rear is finely sculpted where it counts! but oops! looks like a minor defect on the rear-leg boot. 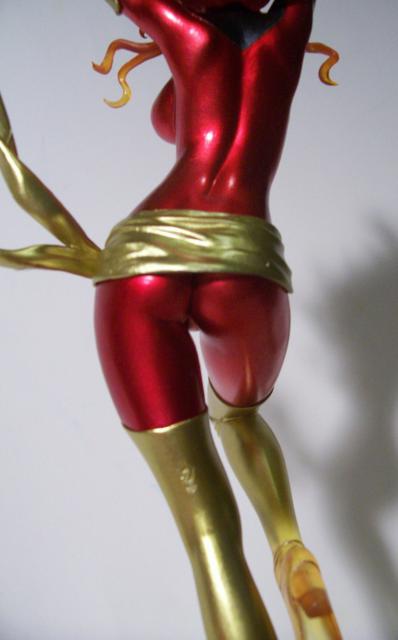 Dark Phoenix is somewhat superior (IMHO) to the Phoenix version in that a number of the parts are translucent rather then solid colored. The feet/boots and the flaming base for example. 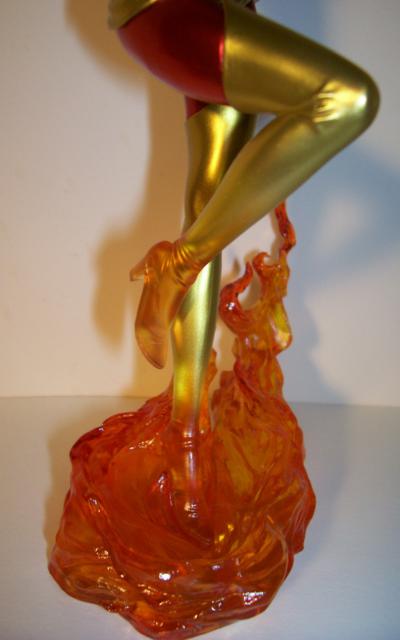 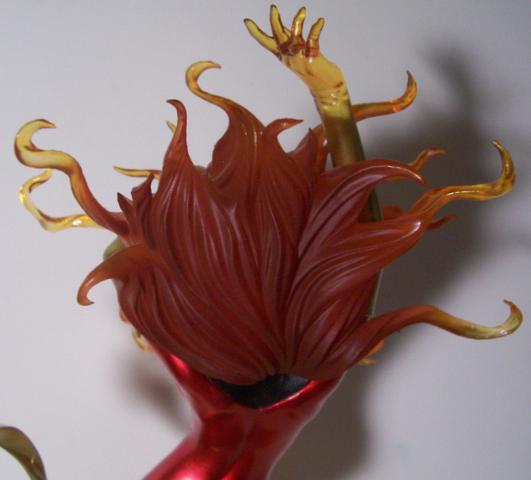 The statue is fastenend tightly to the base with a screw on the bottom. Comparisons with the normal Phoenix variant..

The most obvious and striking difference is in paint. Dark Phoenix has a glossy, burning red-orange versus the rather dull green paint used on Phoenix.

there is also slight but very effective difference in the facial expressions of the two with Phoenix displaying a slightly more benign expression then her dark counterpart. Frankly, for a mass produced statue, I think this is a huge accomplishment.

A good job on the details of her sash and the phoenix pin on her abdomen is a nice addition that isn’t part of the original.. Although it begs the question, why does the galaxy’s most powerful telekinetic need a pin to hold her sash in place??

Here are further comparisons between the solid opaque versus the red translucent bits. The transition is subtle in Dark Phoenix.

Final Comments. Both variations are very nice and in my opinion if ya' had to choose one? Go with "Power corrupts but it looks damn sexy" and Dark Phoenix.

I've REALLY been enjoying the Bishoujo line since it launched. There's a lot that I like about the Kotobukiya statues relative to the Ame-Comi statues produced by DC Direct, both in terms of sculpt and being truer to the original character design. The 1:8 scale works to each figure's advantage with more mileage from the quality over quantity approach.

Its been my observation that sometimes the Ame-Comi statues' unique "anime reinvention" theme backfires with fans who really just wanted a mature sexy version of an already established character and not one that stepped out of a moe style Sailor Moon anime.