Get your Cure Marine at HobbyLink Japan!

At this point I don’t think that it’s any secret that I am a big fan of Cure Marine from HeartCatch! Precure. Is my eagerness for this magical girl slightly unhealthy? More than likely, but I’m not one to question myself so I don’t think much about it.

Let’s go back a few years, before I started getting into Precure. Even a few years ago I was browsing sites like AmiAmi and HobbyLink Japan, keeping an eye out for the various statues and figures that were coming out of Japan. I still remember coming across Megahouse’s Excellent Model series, and for the most part that was a line that featured a lot of Gundam characters, Queen’s Blade, and Macross as well. However a few of those figures didn’t quite seem to fit in with the rest of the figures that Megahouse was producing. Those figures were the first releases from Excellent Model’s HeartCatch! Precure line. Although at the time I did not know what those statues were and didn’t give them a second glance, I now am very fortunate that Megahouse has recently rereleased these figures in this past December. It is a very good time to be a HeartCatch! Precure fan in that regard.

Cure Marine comes in a standard figure box. Much like other figure boxes, the box is able to simultaneously look both nice and cheap at the same time. The sides have some nice close up shots of Cure Marine and her fairy partner Coffret. 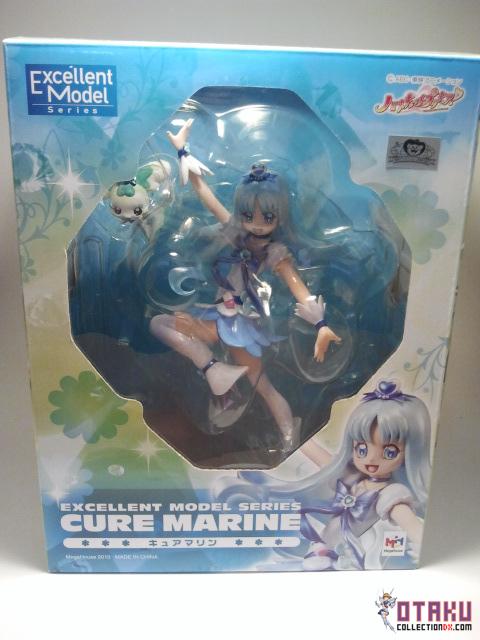 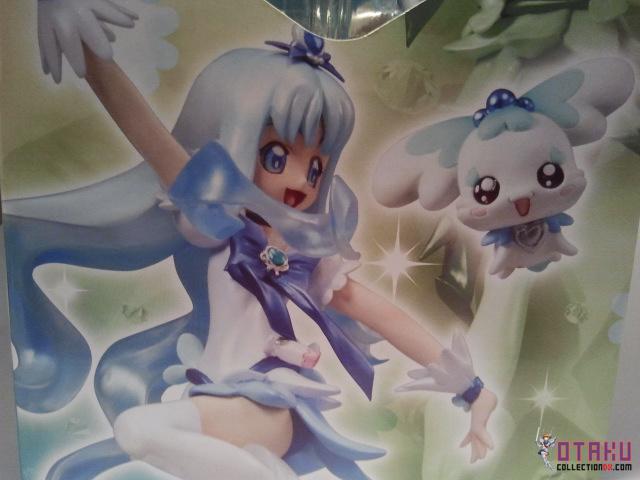 Out of the box, Cure Marine is easy enough to get situated. Just a single foot peg and Cure Marine is all set to go. One thing to note is that her base is actually a blue Heart Seed. It’s a nice little touch and very much appreciated, especially to someone like me who is not a big fan of bland stands. 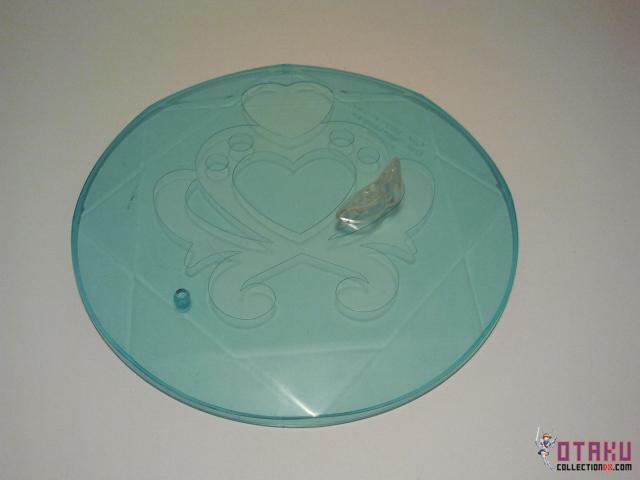 A concern that I had about these figures was that HeartCatch! Precure has a very distinctive aesthetic and style to it. With that in mind, it’s very difficult to capture that style in a three-dimensional form. I think that Megahouse’s sculpt is slightly off from the animation model, but is able to capture the same style in its own form. Cure Marine is very lithe and slender, but at the same time super dynamic and exciting as well. Her mid-stride pose, and her flowing hair does an excellent job of making it seem like this magical girl really did just pop out of the television screen into sculpted form. 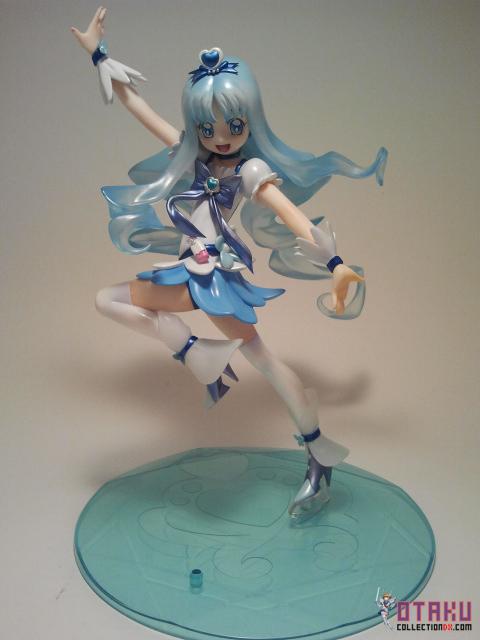 The sculpt and detail on Cure Marine is pretty fantastic. This figure is particularly pleasant to the eye. Her stockings and dress are done in a nice glossy white, and it really shines under the light. The accents of her costume like her bow and hairpiece have a really nice metallic blue that adds a load of depth and detail to it. 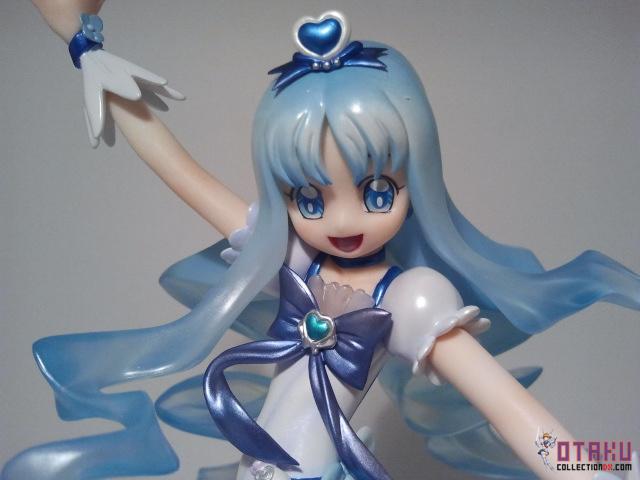 Her skirt is done in a nice textured form, with a nice little flower petal motif as well. 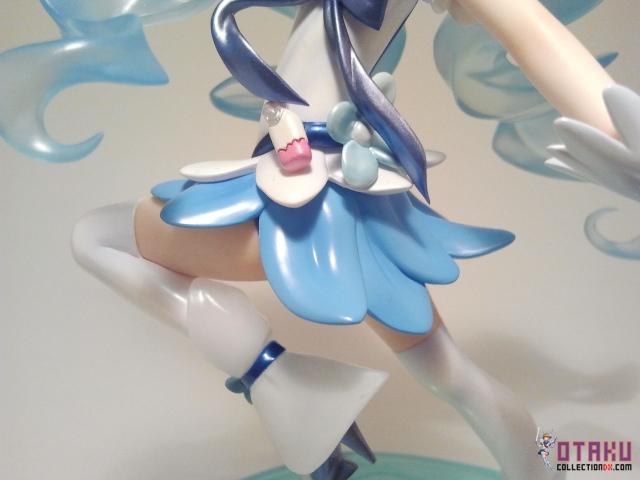 Marine’s hair is also particularly interesting. Although at the top it is fully painted and detailed, it’s actually clear plastic that has been painted over, and the further down the hair you go, there is less paint applied to the hair sculpt. The end result is a very well done frosted look. Her hair manages to seem luminescent, wispy and, well, magical. 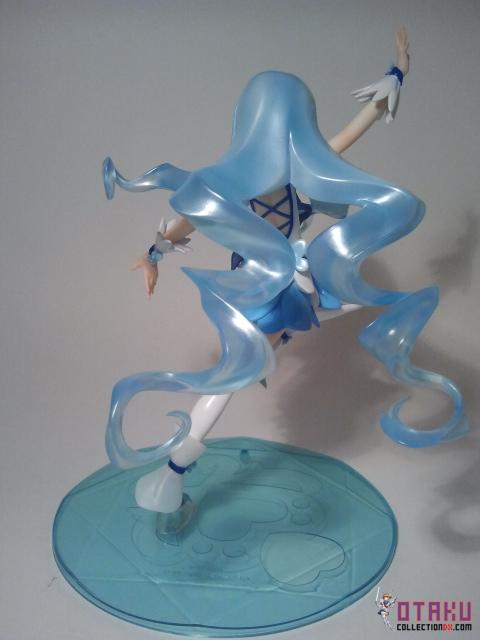 Another bit of detail that I found rather well done was Cure Marine’s midsection. I don’t know if this was intentional on the part of Megahouse, but Marine’s midsection is twisted and contorted in a pretty bizarre way. However I think that manages to capture a part of the style of HeartCatch! Precure, and is instead a positive to the statue instead of being a negative against poor sculpted detail. 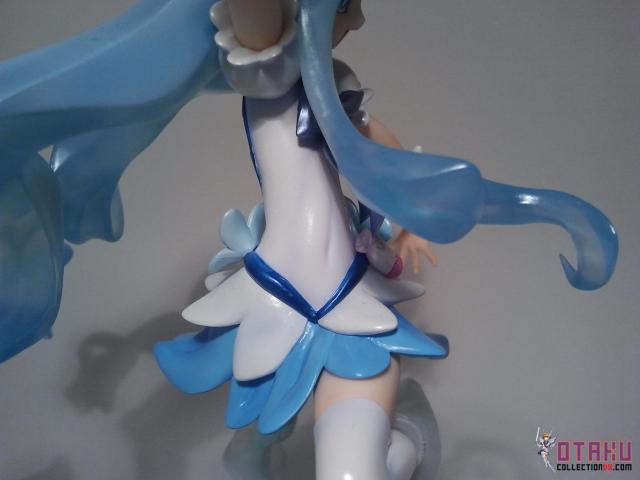 No details are left missing on this figure at all. Not even the tiny little flowers that Marine has on her wrists and ankles! 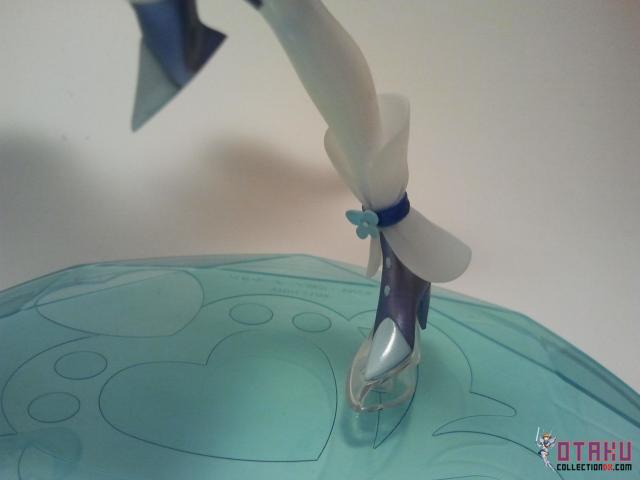 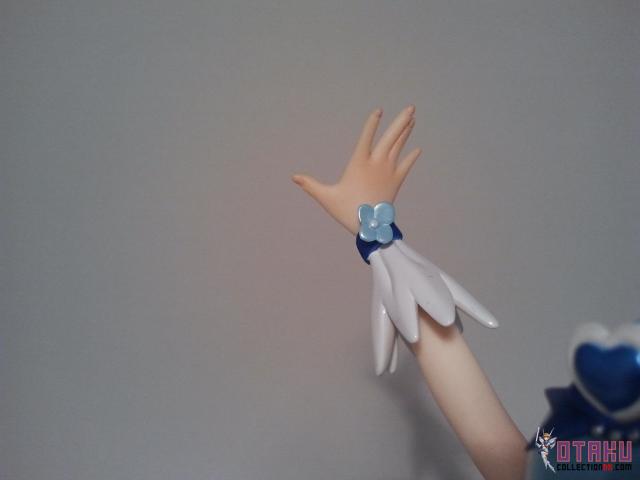 Of course one of the most important parts of any figure is the face, and Cure Marine’s face is very well done. Her eyes are perfect and have just the right twinkle to them, and her smile is wide and excited. Her smile even has a slight curl to her lips at the corners as well, and it really helps bring her expression to life. Notice that even her earrings are sculpted and painted, despite the fact that they are barely visible in any direction. 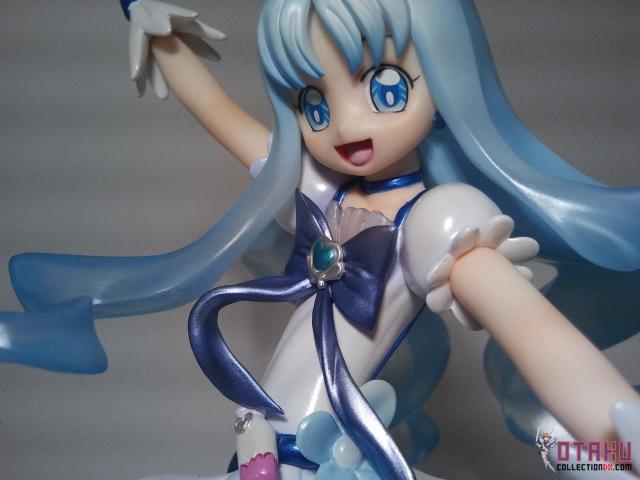 Like other Cure Marine releases, this figure also comes with Erika’s fairy partner Coffret. There isn’t much to say about this except that he’s kind of adorable. He’s painted with a nice soft white and green to make him seem particularly squishy and fuzzy in appearance. However his little hair accessory is done in the same metallic blue from before and adds some extra shine to him, keeping him from being too dull or boring. 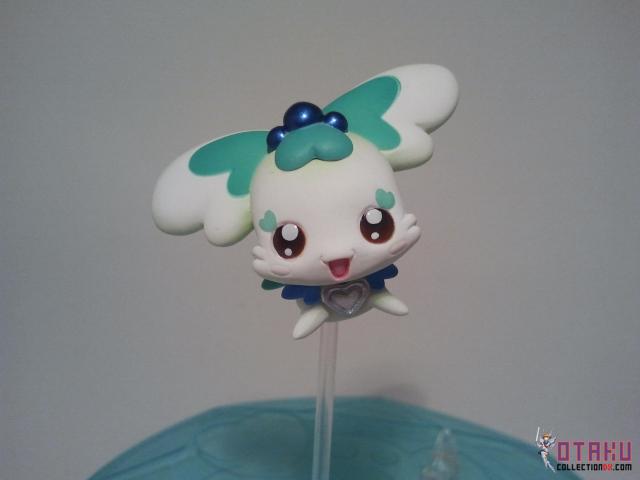 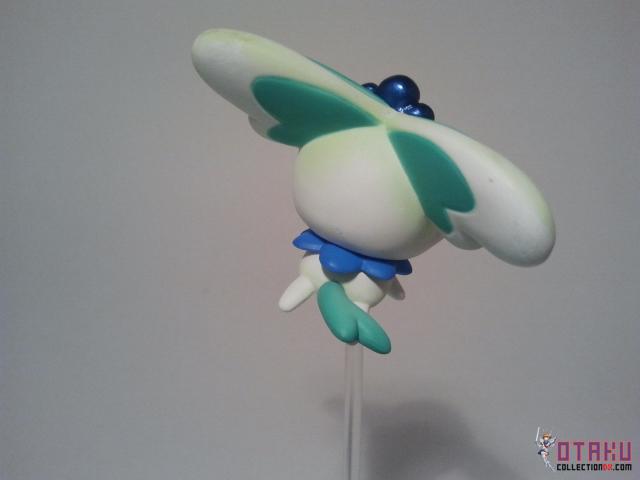 Coffret pegs into the stand using a clear stand piece and fits on well. With both Cure Marine and Coffret in place, this figure really shines as a display piece. The two of them have so much life and excitement to them, and it really does look fantastic. 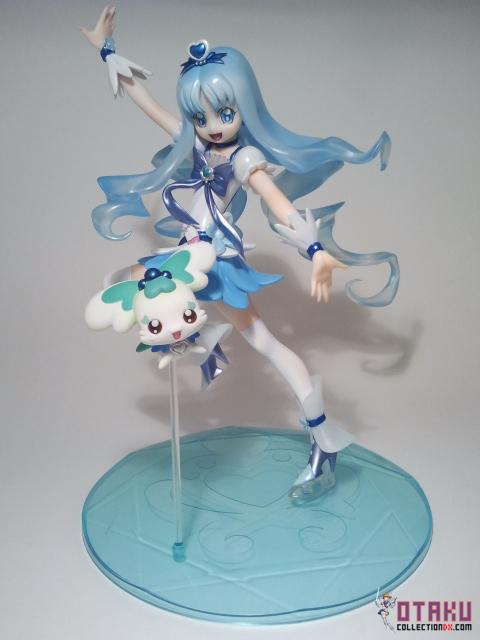 I do worry slightly about the figure tilting over time. Initial production photos showed Cure Marine supported with an additional brace for her knee so that the base supports her, but that was not included. All I can do is have faith that this figure will not warp over time. 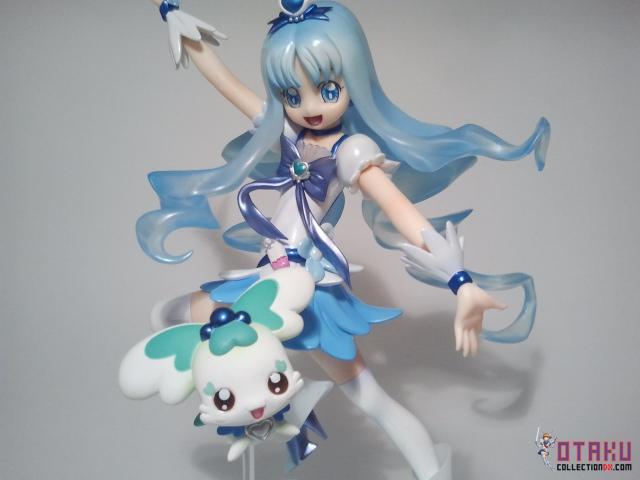 If you’re like me and think Cure Marine is awesome, this figure is pretty much the high point for Cure Marine collectibles. The detail, sculpt, and paint are all incredibly well done, and is an outstanding piece for any fan of Cure Marine, Precure, magical girls, or just anime in general. She is absolutely worth picking up. 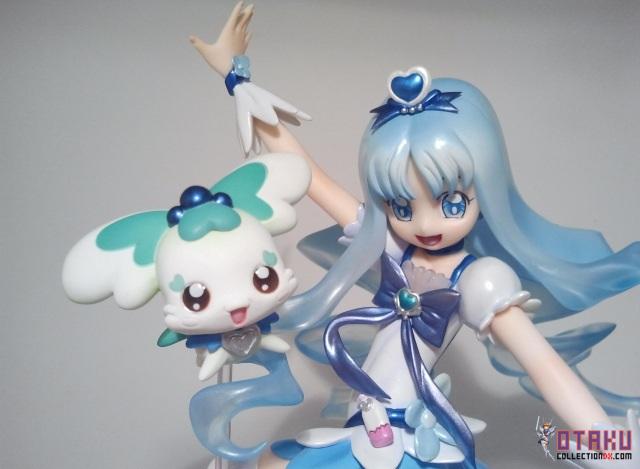 Get your Cure Marine at HobbyLink Japan!