Who here missed out on Konami’s diecast Gurren Lagann? Raise your hands. If you could see me, you would see my hand is way up. I hesitated on purchasing it and missed out on an awesome release since I am not about to pay current aftermarket prices.

Thankfully, I found peace in a smaller, not-so-expensive release by Bandai. It's part of their Composite Ver. Ka series. This particular figure has been sculpted by Hajime Katoki. Alas, it is not of the metal variety but I grew fond of it regardless. I know there was speculation of it’s materials and whatnot, but when it was finally revealed that it was a plastic figure, I was a bit disappointed, compounded only by the fact that it had tribal tattoos all over it. 1992 called and they want their tattoos back. Look, there's nothing wrong with tribal tattoos. I wanted 'em back in the day, but I also had long hair, oversized flannels and Doc Martens. Now I wear polos with white sneakers...and I have no hair... and the hair bit is not by choice.

Anyway, you're here to read about a robot toy, not fashion advice.

This release comes in the standard Ver. Ka box which is a nice window-type design showing the figure and accessories. A nice touch comes in the form of the name screened onto the window of the box to give it a nice high-end feel. 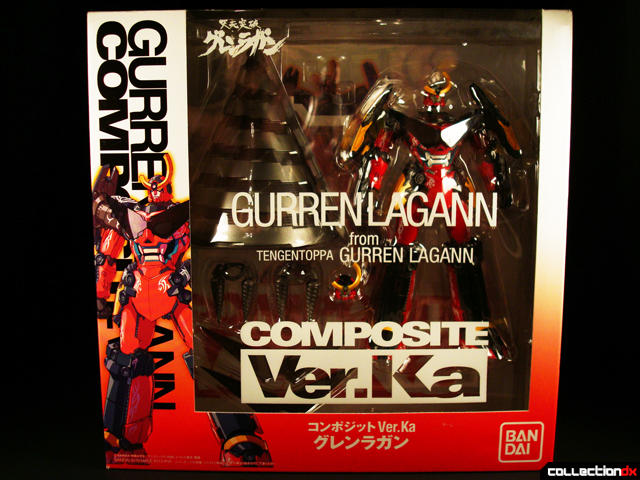 Inside you’ll find the ever popular clear plastic trays which are the norm nowadays. Styrofoam would be out of place here. Everything is neatly laid out and snug. 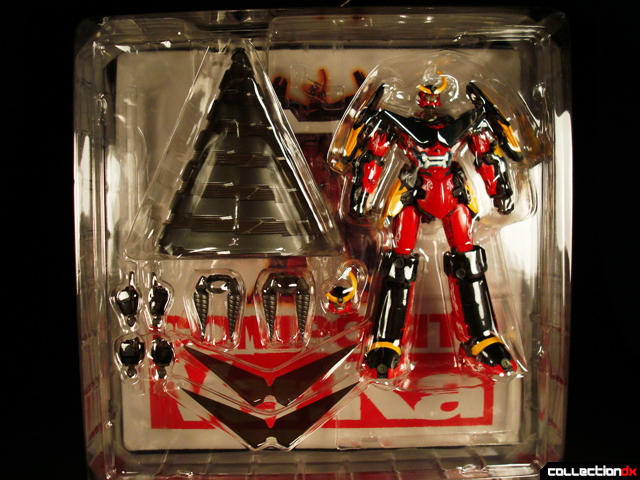 Once I pulled the figure out, I was delighted by the solid feel of the figure. Its hard to tell if any part of this figure is hollow. Most of the mass is centered in his chest. He stands at a pleasant 6.25" tall and very stable. 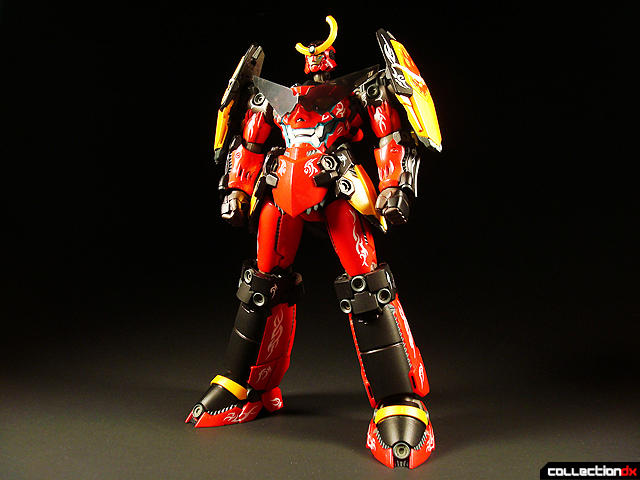 If we spin him around, we can see the detail on his back. 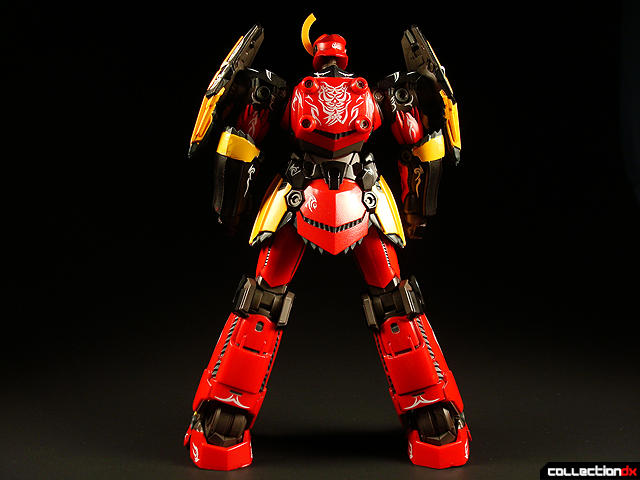 Now lets get up close and check out his some of the tribal tattooage he's sporting on his back. His tribal tattoos have been a very controversial subject. I hated it at first but I learned to live with it. If I had a choice, I'd choose no tattoos. 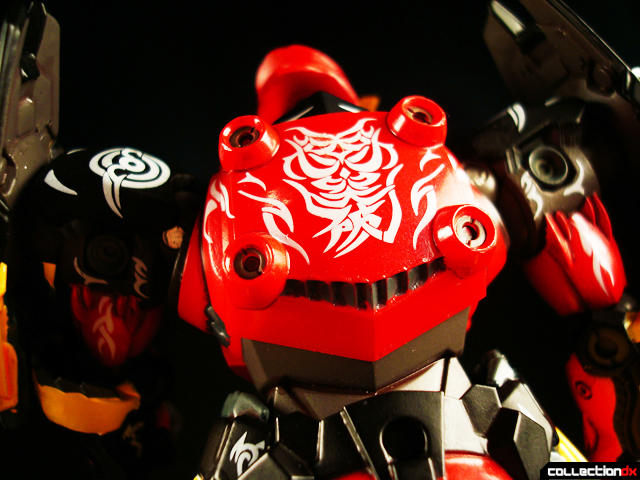 Here we take a closer look at his face and check out his expression. 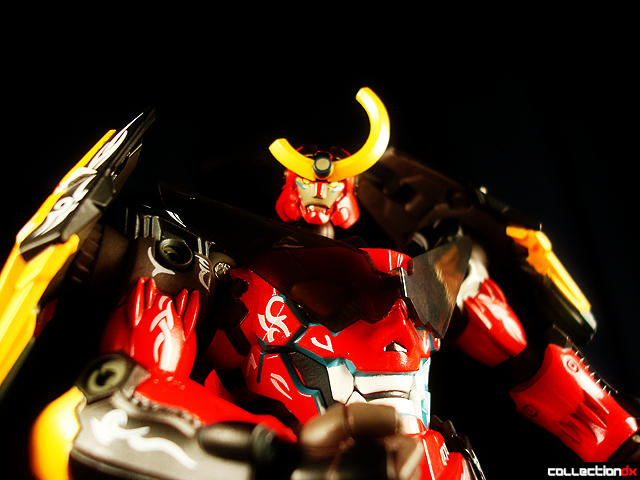 If you don't like that expression, you can choose from another for a total of two. You have to swap heads to change expressions. There is PO'ed and extra PO'ed. ("angry and more angry", for those readers who are not familiar with my lingo. I apologize. After all I am from friggin' Jersey) 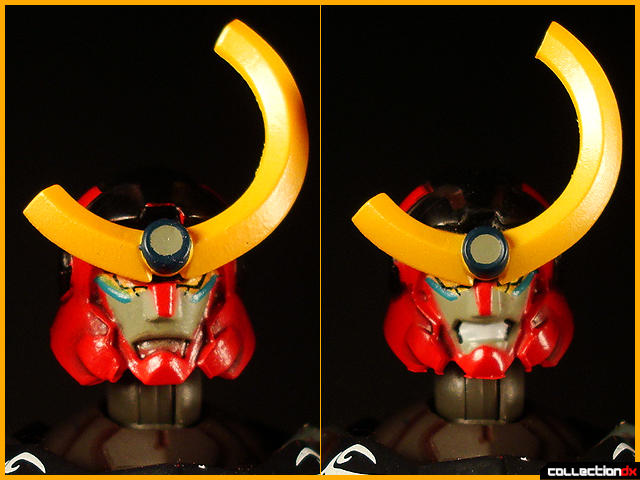 While swapping heads, you will notice a familiar looking joint. It's similar to a Revo joint but without the ratchets. There are grooves molded in to hold the head in better. 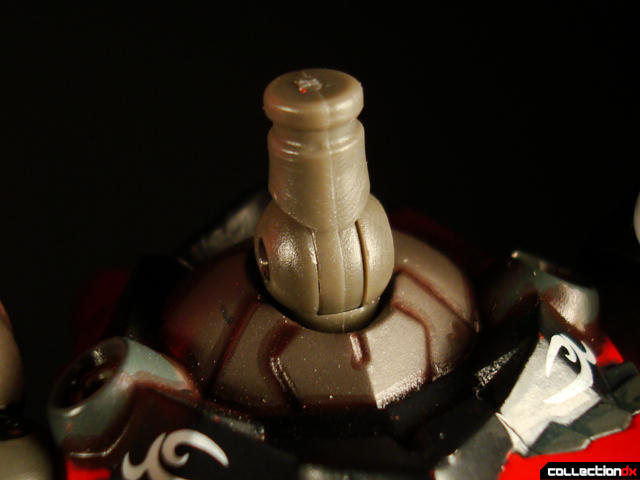 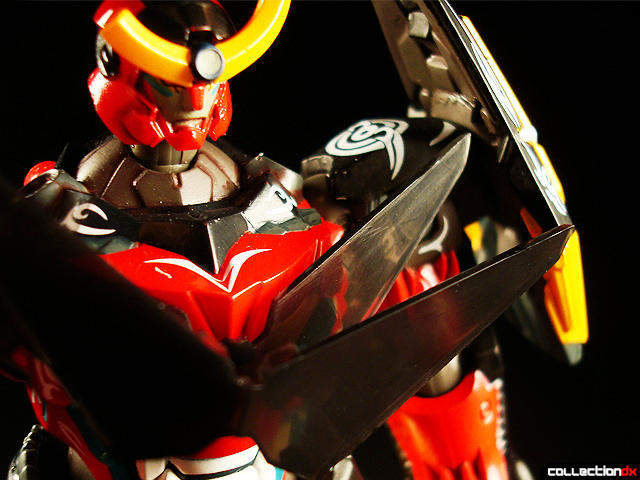 Once you remove the sunglasses completely, you can use them as weapons. Boomerangs to be more precise. 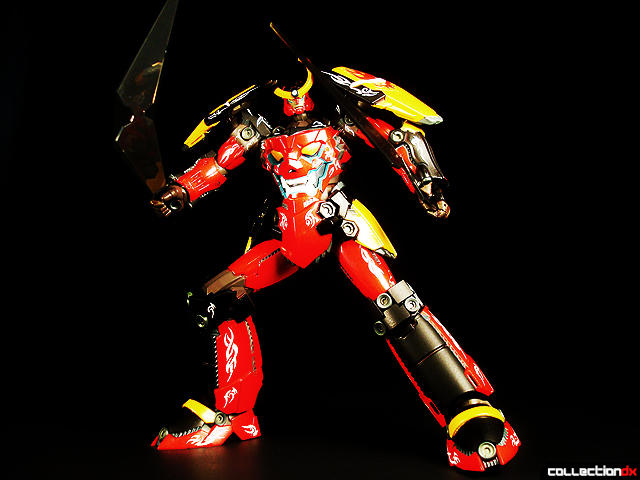 Gurren Lagann loves to point at the sky! 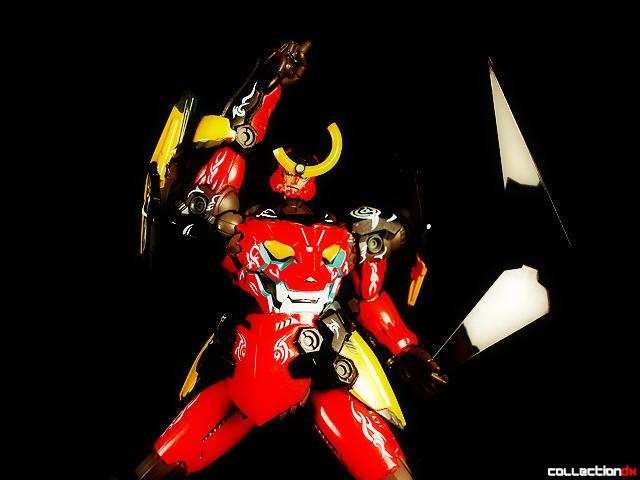 While we have his sunglasses off, we can get a closer look at his big face detail. 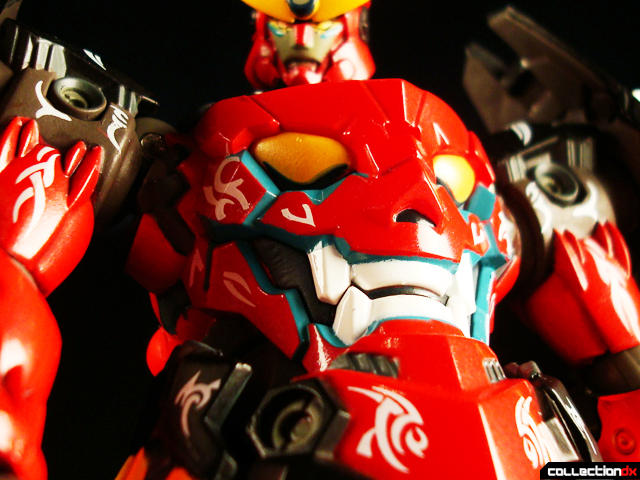 There is just something plain cool about a robot with a huge face on his chest. Normally if a robot has a face on it's chest, it's of a lion which is cool, but an angry humanoid face always scores high points.

I've shown you some up close shots of his details but there's a couple of things that stood out that I liked. One is the super nice matte finish of the paint used on his shins. Very nice and sharp molding with perfect paint application. 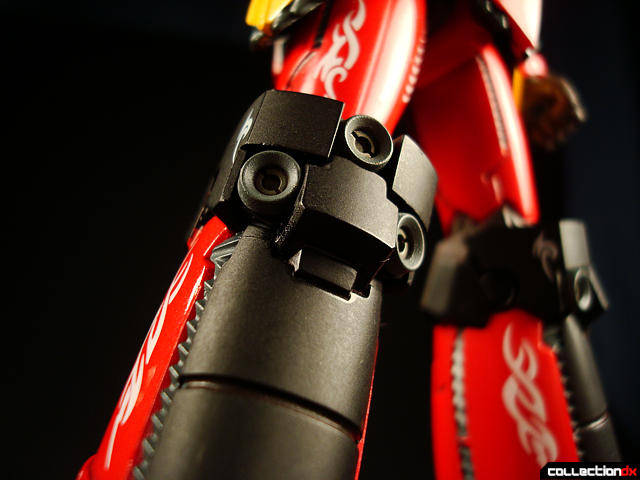 Another thing I liked was that they "weathered" the fists. I wouldn't expect a figure of this size or price range to have such detail on his fists, but he does. Some high end gokins don't even get this treatment. 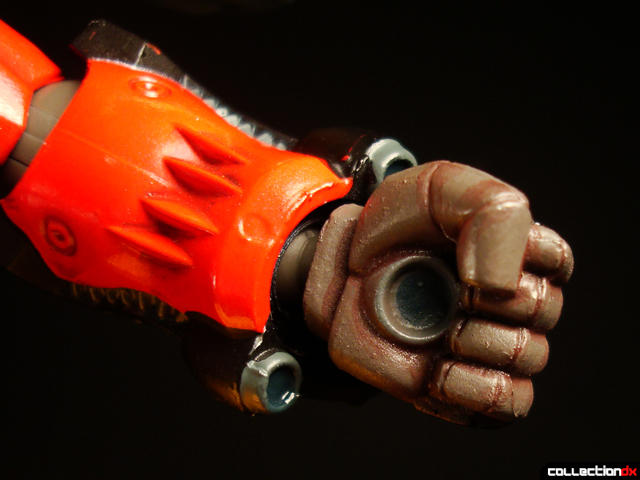 How about accessories you ask? Well not much except for a couple of small drills and a drill that's almost as big as he is! So how does can a small figure support a boring tool of such massive proportions? Easy. It's hollow. 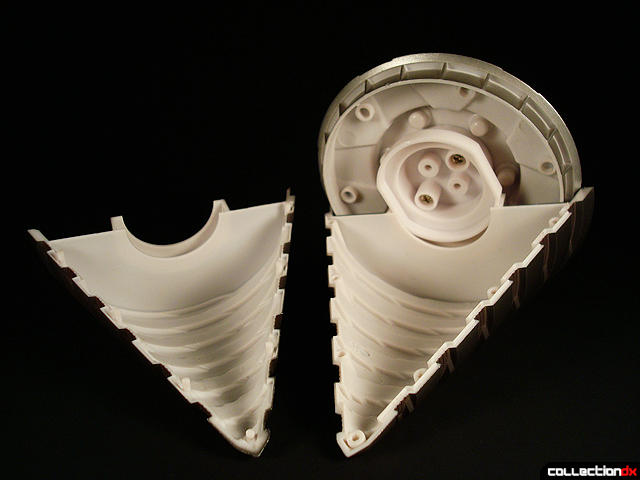 Once you join the two halves together, which are precisely molded to minimize seamlines, you can pop it onto his wrist and point it at the sky. He easily holds it up, however I haven't had it long enough to know if the joints will loosen up and have trouble maintaining this pose. 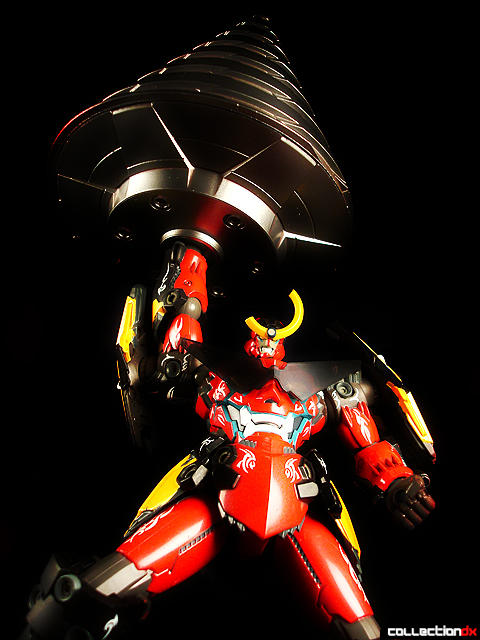 So say you want to show off some mid-air poses, what do you do? Well Bandai has been generous enough to include one of their classy white stands. Gurren Lagann rocks out on his stand via his convenient butt-hole. I'm very glad I can stand on my own. 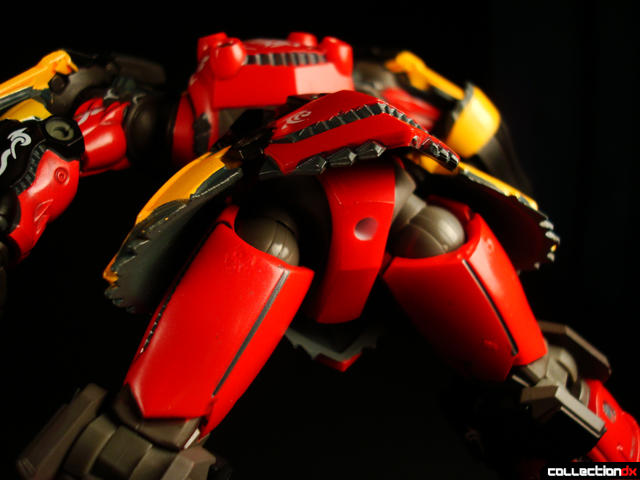 Once he is comfortably on his stand, he can show off his dual hand drills and execute a mid-air pose. 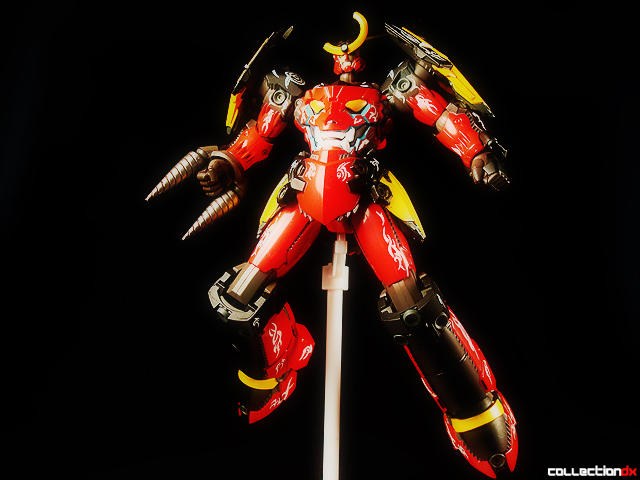 I prefer a classic pose when displaying mine. Don't be boring like me, I'm old and bald. Take advantage of the stand and use your creativity. 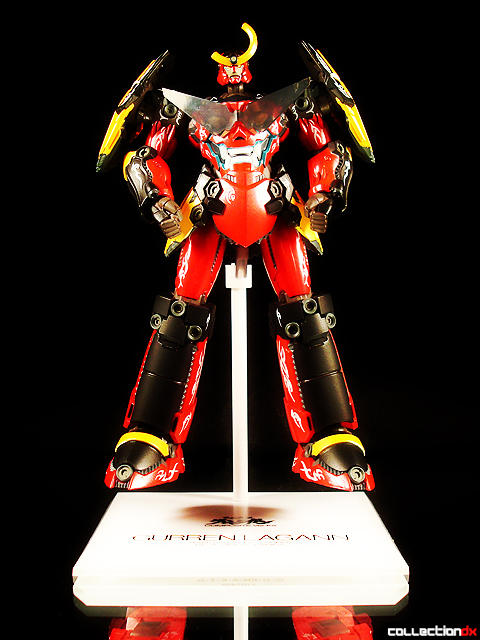 So, I've shown you what's going on and what to expect, but what is my overall reaction to this release? Well, not making comparisons with this and Revoltech figures is tough, being made of PVC and all, but right off the bat, you know this figure is more solidly built and has a more expensive feel than a Revoltech can possibly hope for. It's not greasy, it's bigger, joints don't pop off, paint applications are superb (I love that word) and it looks right at home next to my other bots in my display case of which 98% are of the die-cast variety. I guess it's not fair to compare but I assume lots of people will want to know how it stacks up to the competition.

Now excuse me while I pull out my old flannels and Docs and rock out to some Stone Temple Pilots.

4 comments posted
So is most of the body PVC or

So is most of the body PVC or ABS?

You know I tried figuring out what parts are PVC and what is ABS. There are varying textures everywhere but its overall a firm PVC feeling material. Its not rubbery at all.

I kept reading flannel as fannel. It probably has to do with Katoki's name being somewhere on my screen.

Just got into the show, and I am trying to decide which figure version to get, thanks for the helpful info! Not digging the tribal tattoos though.