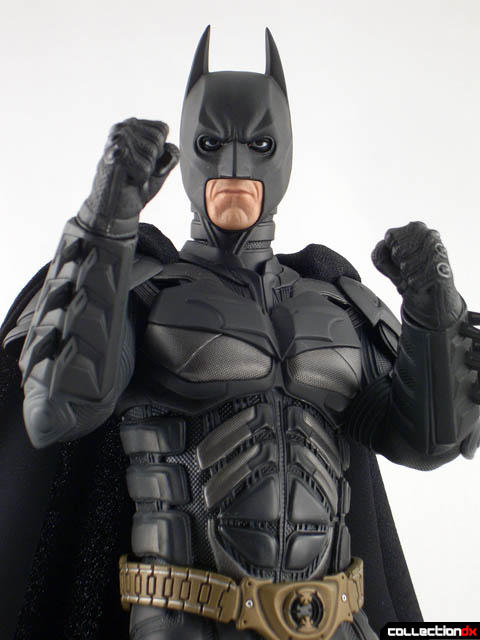 Christopher Nolan's big-screen reboot of the Batman mythos has pretty much changed what audiences and fans have come to expect of "superhero" movies. Well, Hot Toys does the same with 1/6 scale figures. They raise the bar on detail and craftsmanship and have completely changed what I expect of a collectible of this size and scale. When I saw they were doing a Dark Knight Batman I got pretty excited to get my hands on it. Now that I have it I am happy to report it lives up to expectations. 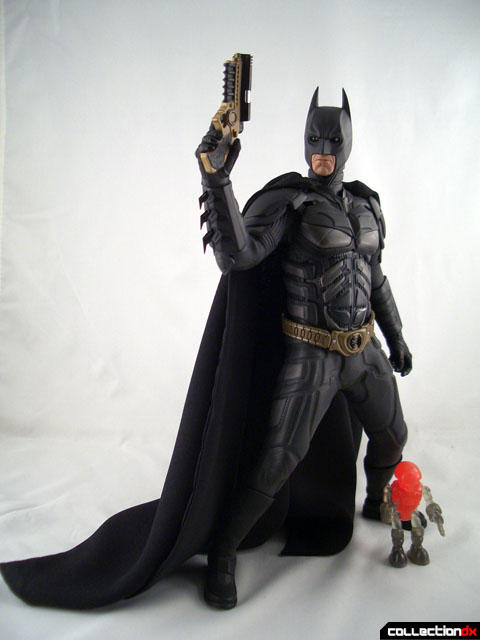 Hot Toys has consistently made some of the most spectacular 1/6 scale posable figures available on the market. Collectors and critics alike have hailed their products as some of the best on the market. Not content to rest on their laurels, they upped the ante with their MMS (Movie Masterpiece Series) DX line by throwing in more accessories you can shake a stick at as well as adding the very clever P.E.R.S. gimmick to this line.

You know you bought something special right from the get-go as Hot Toys packed the Dark Knight in a deluxe style package.

The box is covered in a shiny material with the bat-symbol on the front in foil printing.

The lid is held in place with a magnet to hold it together securely. When you open the lid you are presented with a text biography on the inside lid and covering the nested foam trays is a lid with three Batarang replicas. These are made of plastic with VERY sharp corners.

Hot Toys really did include every conceivable accessory they could in this release. Nothing Batman was seen using during the course of the film, The Dark Knight is excluded.

Packed in the top tray is...

Packed in the bottom tray is...

Batman's cape is made of cloth and is huge!

Clips are located where the cape attached to the suit, giving it the lean, neckline hugging effect of the cape in the film.

It's so well executed and dramatic.

As you can see, Hot Toys spares no expense. You pay a bit more for their stuff compared to other 1/6th scale figure manufacturers out there, but you get oh so much more for your money. 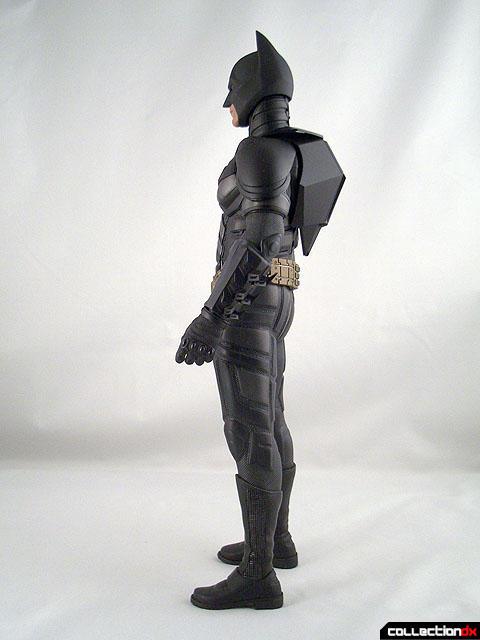 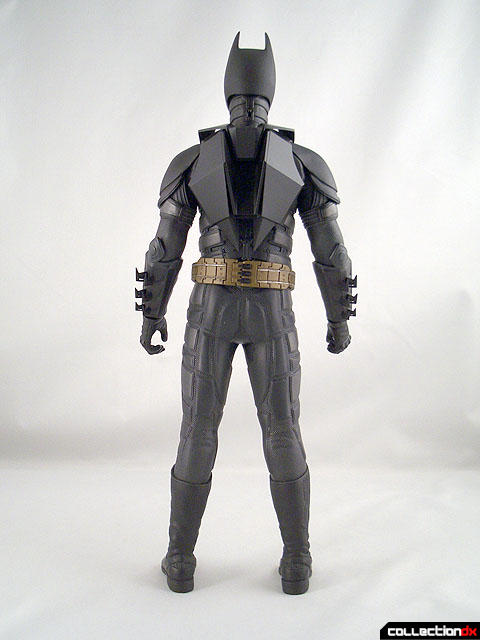 The suit is exceptionally detailed and film accurate. Honestly, it looks like the actual suit from the film. 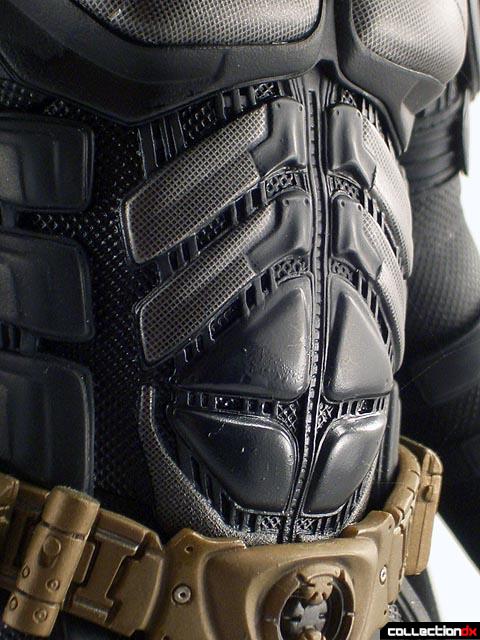 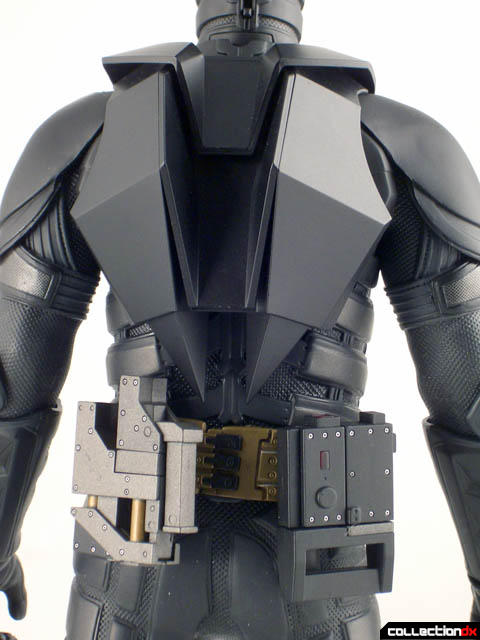 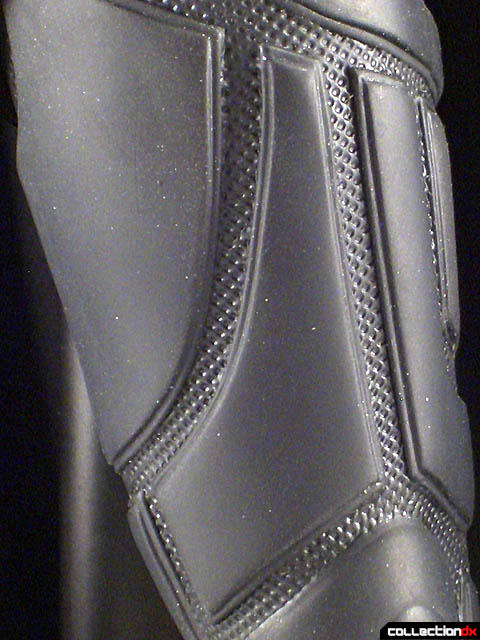 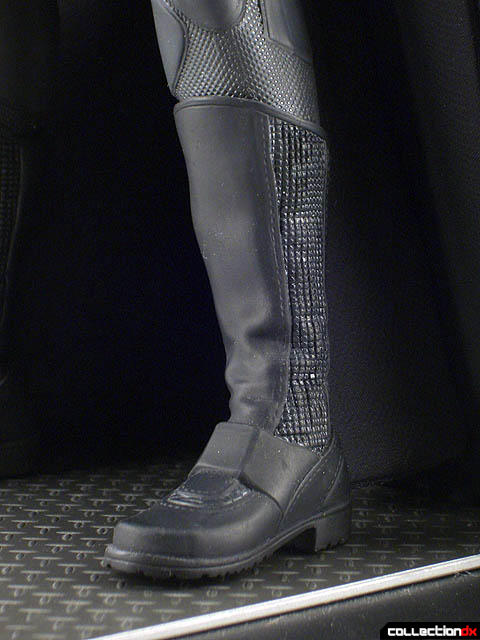 The majority of the upper body armor, shoulders, and forearms are a hard ABS plastic with the rest of the suit being a softer, flexible rubber.

That rubber, however, does limit some of the posability. For example, if you bend the knee to get him in a crouching pose the leg springs back to a neutral pose. It's not a deal-breaker and not completely unexpected for the design of the suit.

Bats comes with two heads. The first is a battery operated “light-up eyes” sonar head as seen during the finale of the film. This head includes the neck, which docks into the body.

The P.E.R.S. Head is the real winner in this set. PERS stands for Parallel Eye Roll System and allows you to position where the character’s eyes look. It brings a whole new level of display options to the table. 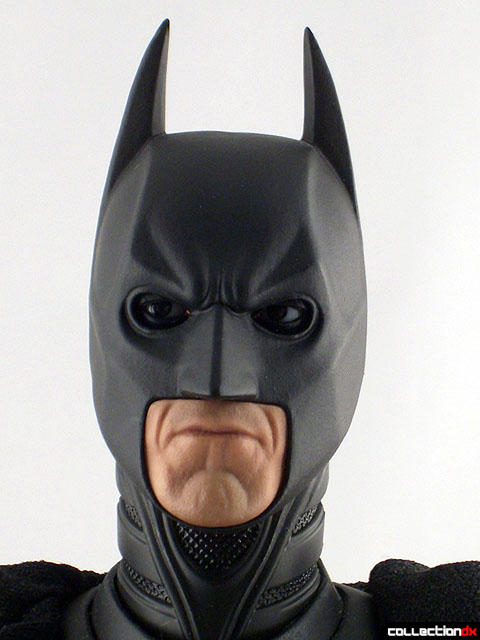 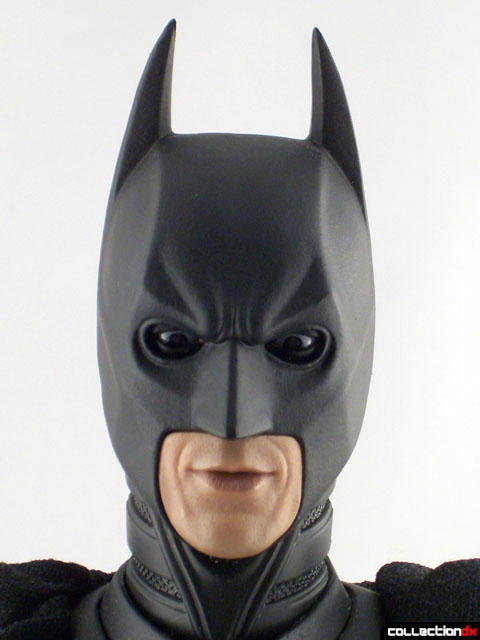 You can adjust the eyes by using the provided tool to reach into the head and “grab” the nub that moves the eyes.

Once positioned, you attach the magnetic neck to the body and then the head. The magnet in the neck is very strong and will hold the head in any pose without fear of it falling off.

Being a MMS DX release, this comes with a bigger, light-up, themed base. Two spotlights are positioned in either corner and can be moved and repositioned for a more dramatic lighting effect. A nameplate of the character is located on the front of the base.

Yeah it's pretty much the Batman figure any fan of The Dark Knight would want.

They cost more than average 1/6 figures, but they are so well worth it. I don't know how many times I have to say it, if Hot Toys announces a character you love for manufacture, pre-order it immediately or it will sell out while you sit on the fence.

If you’re a big Batman fan, forget buying 20 different action-figures. Instead you should just buy one Hot Toys Batman and be done with it.

14 comments posted
I just can't do it.

"If you’re a big Batman fan, forget buying 20 different action-figures. Instead you should just buy one Hot Toys Batman and be done with it."

I totally agree with you over 100%. This piece outshines them all including the Revoltech version. I think it deserves the Hugo Award for best SF collectible presentation of the year. I would love to see what Hot Toys would come out with other DC figures like Green Lantern, Superman and Hawkman.

I totally love the design of this batsuit ; it's almost like Sam Fisher's Splinter Cell sneaking suit, and this figure does justice to this design. The headsculpt, face texture and paint app are simply amazing for a toy ; the mouth & chin look very natural.

The only nitpick would be the neck ; the neck is just a tad too long imo.

I am not agree with you, and this batman figure is the perfect example about that.

First, this Batman is a great figure and it is the best Dark Knight Batman figure until now,... but ...it had or has a big problem. The abdominal area has residue of oil. And after saw you images, definetly you have the same problem. In some cases wasnt a big deal but in other cases ruined the figure totally

you can see the sideshow topic of this problem here:

So I think if you dont want to lose your money, is better if you see first the review of other collectors and if all is ok with the figure, you can proceed to buy it! because you could get a surprise!

The oil was the straw that broke the camel's back, and why I sold mine. After a few months I found another figure and it had the same exact problem, but much much worse. I liked TDK but not enough to keep this figure.

Also, there are two other common problems with this figure that really need to be mentioned, or tears will flow:

The sticky grenade gun: This thing will break in a heartbeat. It is super fragile and it seems like moving the parts around only makes it more stiff and fragile. Be careful!

The rubber suit: On my first figure a combination of using the stand and a deep wide-leg pose over the course of three months, caused the rubber suit to rip at the crotch.

No high-end toy is perfect gentlemen. There's bound to be flaws here and there but not severe enough to cry timber on a totem bound to fall on soil. Based on the results I've seen from that link, a portion of the owners who bought The Bat-Dude weren't bothered by the oil residue. They just simply cleaned it out. Besides, if there's one or a dozen Bat-Dudes that's got the major warning signs of a lemon, just e-mail the Hot Toys customer service & they'll fix the problem. I don't see why they wouldn't take yes for an answer.

That oil is a sign that the suit may degrade over time. I've had it on a few bagged Marmit vinyls and the oil, if not cleaned up, gets tacky, and then dry, ruining the figure.

And I can only speak to MINE as well... which had the issues mentioned.

No one expects you to speak about things that didn't affect you- why get defensive Atom?

I don't think anything I posted was an insult to you, but more commenting on the toy's issues.

Why is it a problem for someone to disagree?

It looks fantastic but I just can't get around that price tag. It just cost so much and I'm out of extra cash as it is.

it needs a grappling hook.

very tempting toy to get if you can get past the sticker shock.