I have to admit that the luster of Revoltech had been wearing off. Too many characters I didn't care about, and too many big-boobed girly figures. I had once thought CollectionDX would cover them all, but once the spin off lines started, I knew that just wasn't going to be realistic. It's hard for me to get excited about Revoltech Professor Layton, you know?

A new line of Revoltech came out, however, and that line I am interested in. Sci-Fi Revoltech covers characters from classic and modern science fiction, as opposed to Anime or Manga. Think classic Japanese monster movies, and even American science fiction. This I like.

Baragon comes from the classic Japanese Kaiju flick "Frankenstein versus Subterranean Monster Baragon", known in the US as "Frankenstein Conquers the World", or simply "Frankenstein vs. Baragon". Released in 1965, this film features a Nazi-resurrected Frankenstein’s Monster fighting Baragon. This is one of my favorite classic Kaiju films, so I was very excited to get this.

Baragon has appeared in other Toho Kaiju films, but it is the "Frankenstein vs. Baragon" appearance that this figure is based on.

The box is really, really nice. The presentation is classy, with a very old-school feel to it. 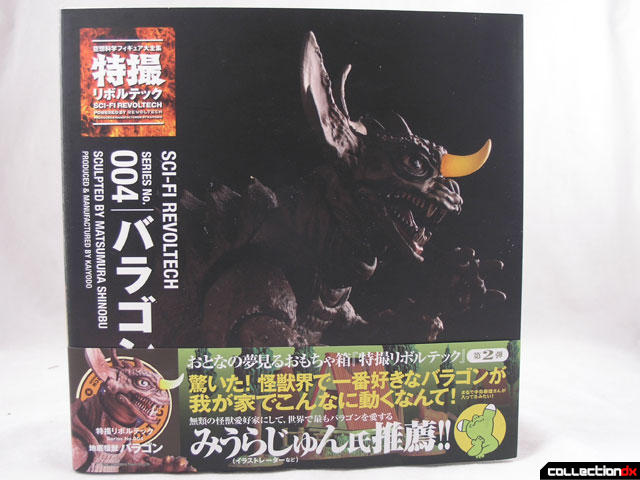 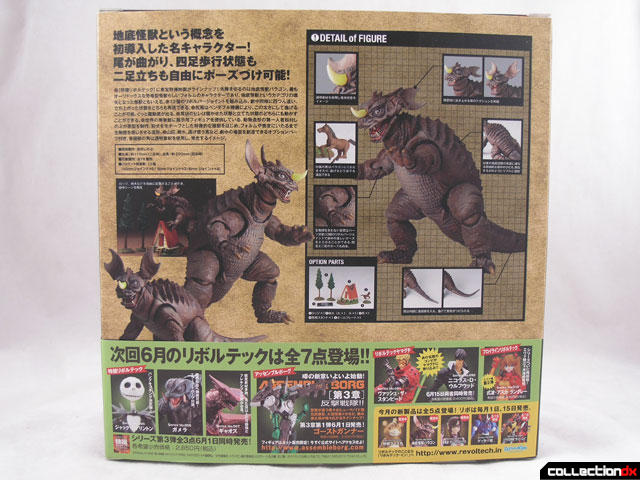 The front cover opens like a book, and inside are images from the film and some history of Baragon. Opposite the inner cover is a clear window, showing Baragon and all his accessories. 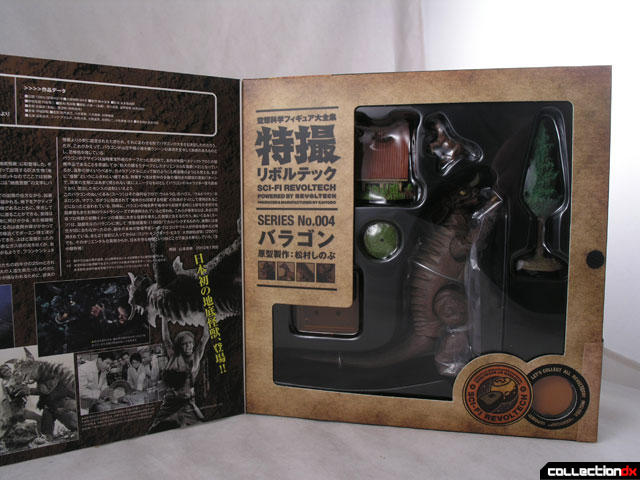 Baragon is self contained - with no swappable hands or accessories. Kaiyodo is going with a very "realistic" look with this line, so no cheesy energy blast effects. What are included though are bits of scenery from Baragon's appearance in the film. 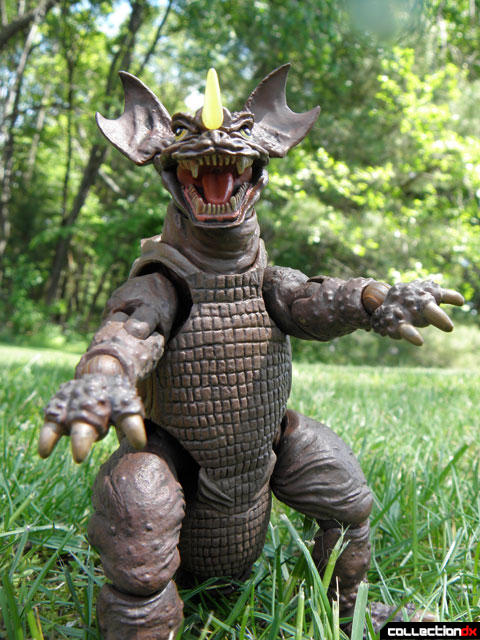 The figure is nicely articulated, although I wonder about some of the joint choices. 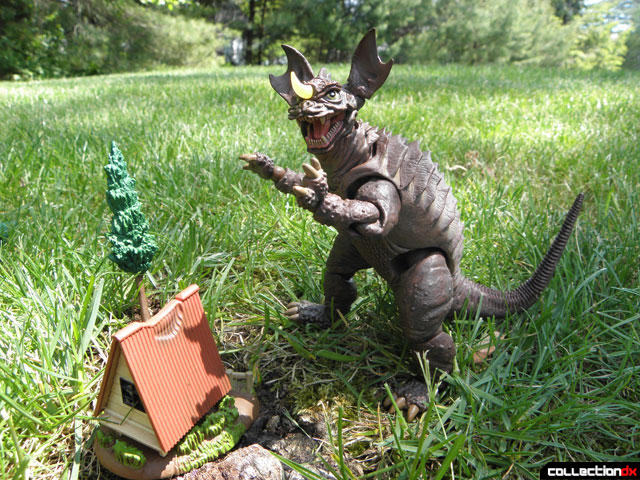 Starting with the head, Baragon has an articulated jaw and ears, both not Revoltech joints. The horn is a frosted translucent plastic which looks great when illuminated. 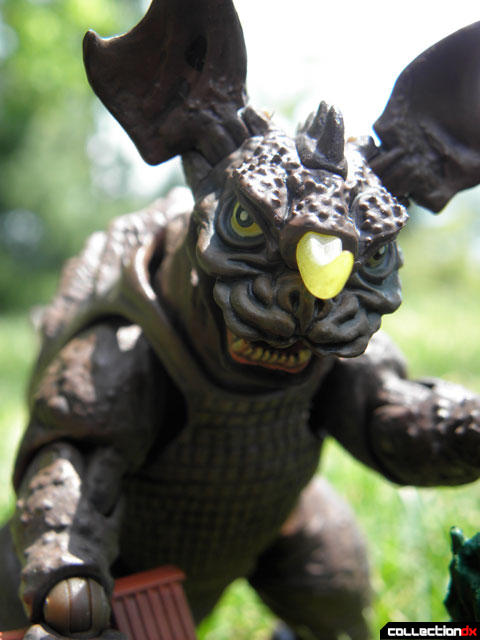 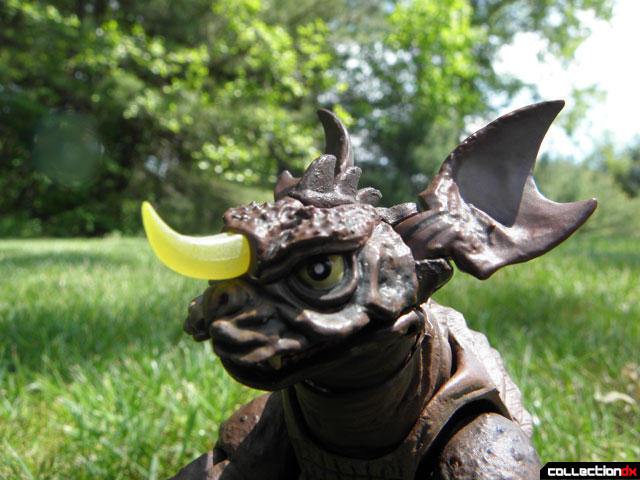 The neck is a multi-articulated segment surrounded by plastic ring that allows for a full range of movement without looking Revoltech-ish. 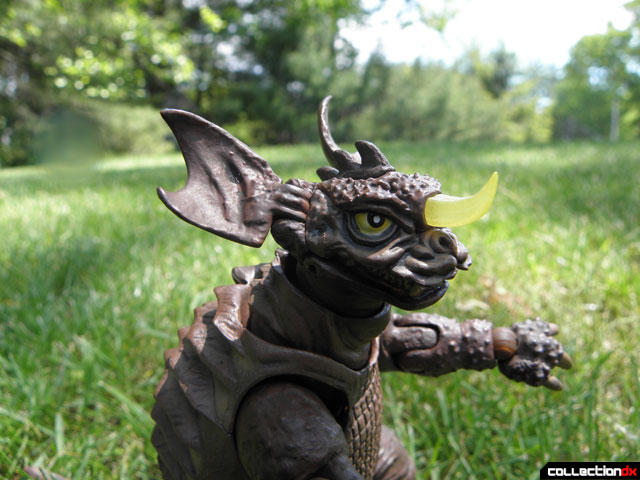 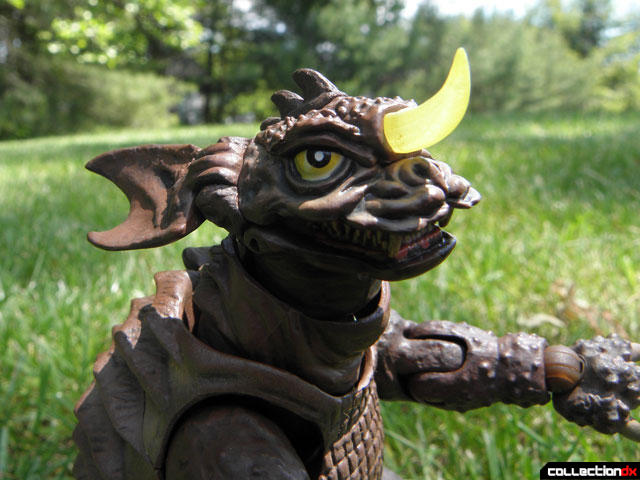 Shoulders, elbows and wrists are articulated, but only the shoulders are Revoltech joints. 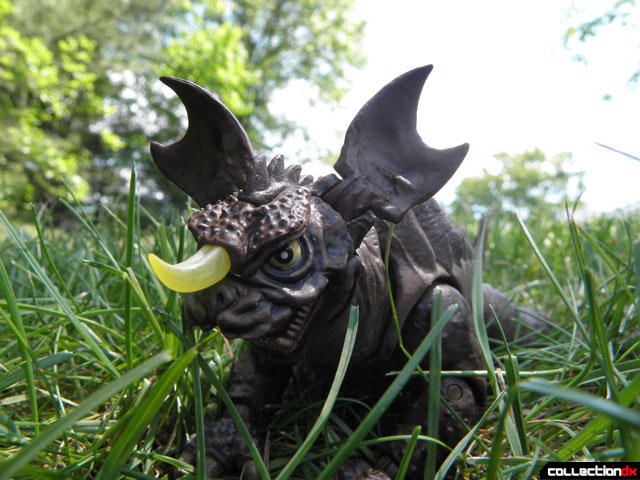 The legs have Revoltech joints in all three points of articulation; the bulk of the upper legs, however, limits movement a little. Still, it can do all the poses one would expect from Baragon.

The tail is a long rubber tail with a bendy metal rod inside. The whole unit connects to the main body with a Revoltech joint. Some have commented that the bendy rod inside does not run the full length of the tail and thus is only posable to a certain point. This is true, but it really does not hinder any movement. Baragon doesn't really need to curl his tail tightly; he's never seen hanging from trees or anything. 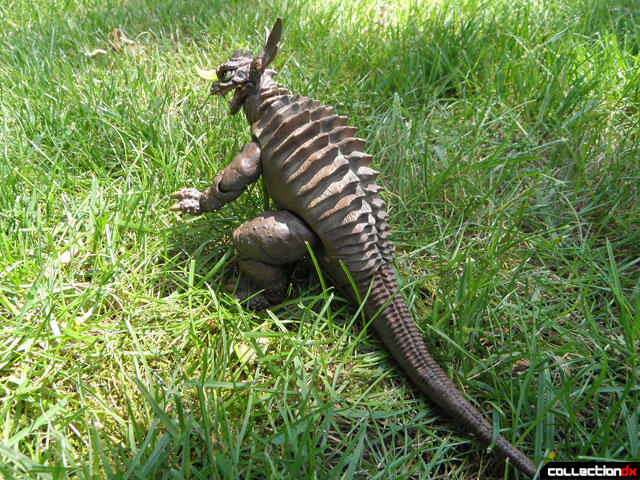 Baragon is solid and cool, but he’s made even cooler with the addition of the environmental accessories. 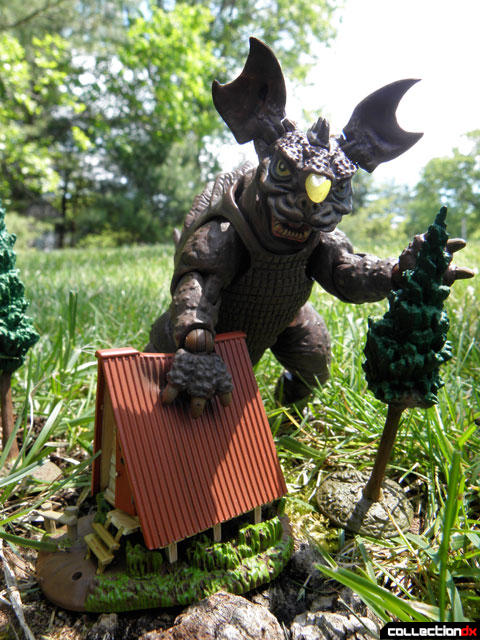 In the film, Baragon is wandering through the woods when he comes upon a small town. Baragon of course devastates the town, including a horse in a stable.

The set includes a farm house (with dented roof), two trees, a horse, and a stand for the horse. The horse can also be attached to the base of the house as well. 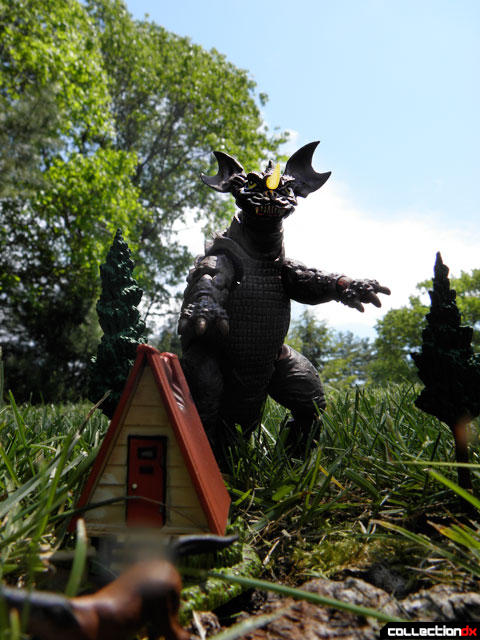 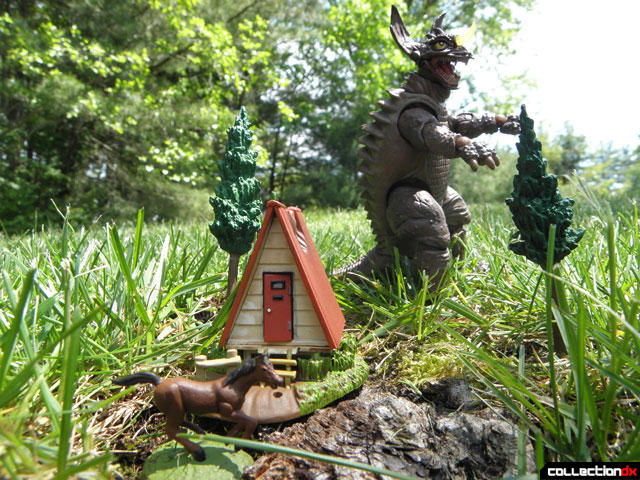 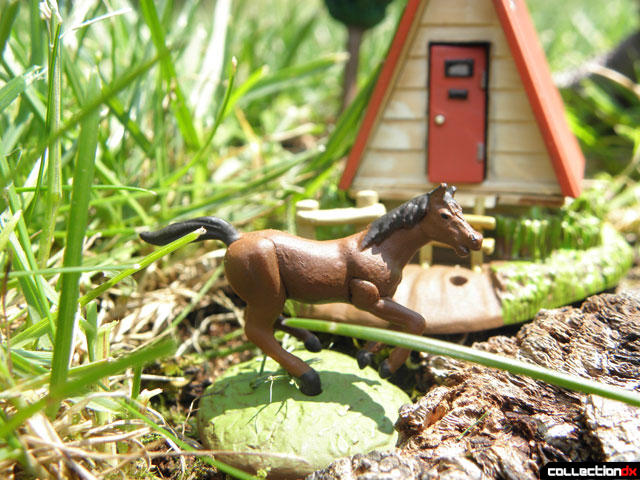 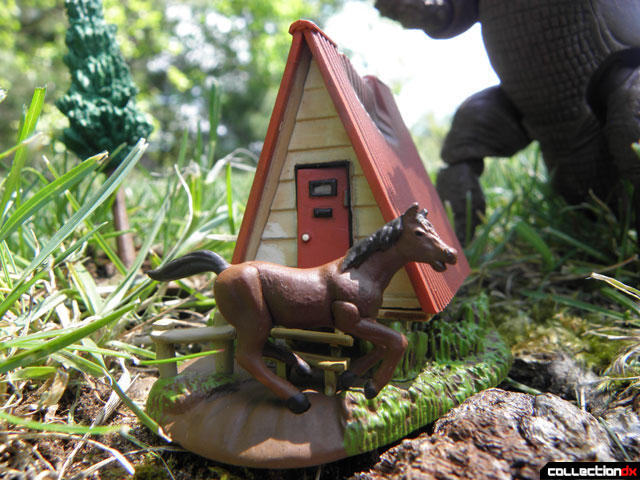 The dent in the roof is to simulate Baragon's handprint. 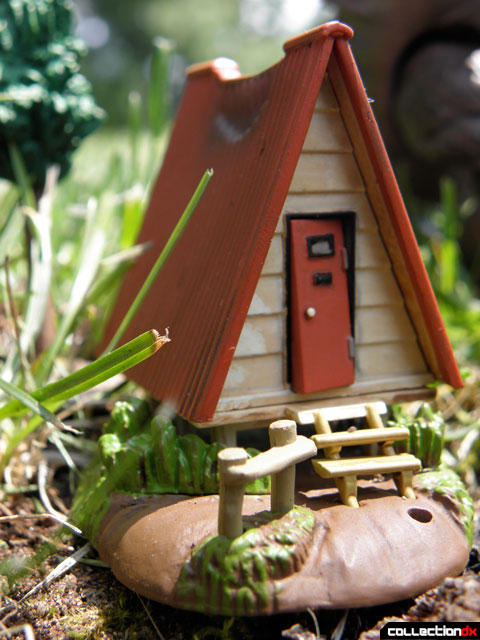 I had a lot of fun with this set, and I look forward to getting more Sci-Fi Revoltech, especially the Toho Kaiju ones. 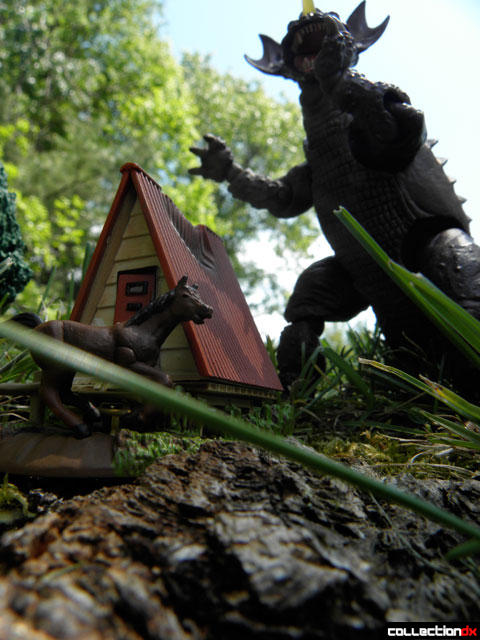 Awesome figure! With awesome accessories too!
I hope there will be Godzilla and Mecha Godzilla...

"It's hard for me to get excited about Revoltech Professor Layton, you know?"

There aren't many Revoltechs that grab my attention but this sci-fi line looks like its gonna be great. I was waiting for a review of this before I snagged it. I can't wait to see what else this line holds in the future.

Yeah when the revoltechs first came out I thought they were really awesome, now there just so so and the prices have gone up considerably from when they first were released. I will say the new sci-fi line looks awesome. I love all the Kaiju there doing now. I cant wait to see Gamera and Daimajin.

Ironically, the last Revoltech I bought was Starscream, I think....until Professor Layton drew me back in. HA!

A sci-fi line does sound great, though. I wonder what US figures they may do...?

Baragon looks great! Yes, more Toho characters would be awesome! Well, Gamera and Gyaos are on their way to be released... in the meantime, how about Toho Frankenstein to go with his buddy here. After that, make it Godzilla TIME!!!

Nice toy. I'm a big fan of figures that come with little accessories, they really give a sense of scale & they add interest.

Wow...you summed up Nick Adams as "the white guy in this show" and Pillow Talk? I kinda don't know what to say...

I'll be looking forward to these new sci-fi releases, and recently nothing that they have released has caught my attention or i really don't know the series to actually take notice or care. The Kaijus are really looking out to be something i want to collect. Another note, does anyone else find the batman head sculpt a bit off? Not the helmet one, but the other head.

That neck? Definitely. At first I thought it was just a weird prototype, but it was in the official pictures too.