Andromeda Shun is one of the five main Bronze Saints in Saint Seiya. Shun is the crybaby brother of Ikki. As young kids, Shun and Ikki are adopted, along with other orphans, by the Graude Foundation.  The Foundation aims to train the orphans in order to become Saints and retrieve the Cloths that reside in various locations around the world. Shun has the misfortune of pulling the worst location assignment: Death Queen Island.  His brother Phoenix, however, knows that such a pure soul as Shun would not survive on that island that is described as hell on earth. So Ikki, being the protective older brother, takes Shun’s place. Shun is then assigned to Andromeda Island, where he undergoes training to obtain the Andromeda Cloth.

The box for this releses in the standard book-style box of the Saint Cloth Myth line. 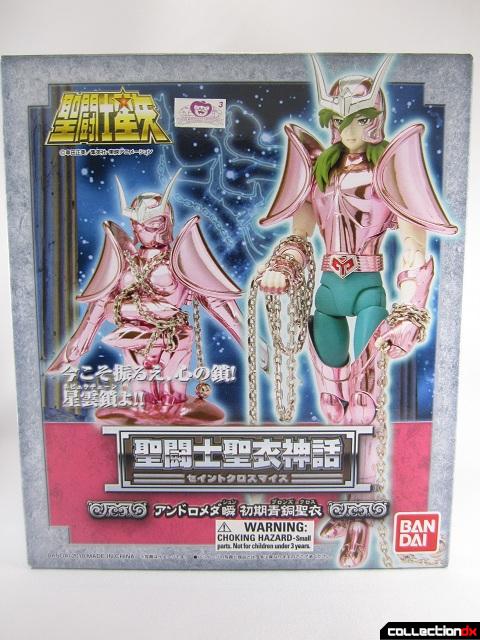 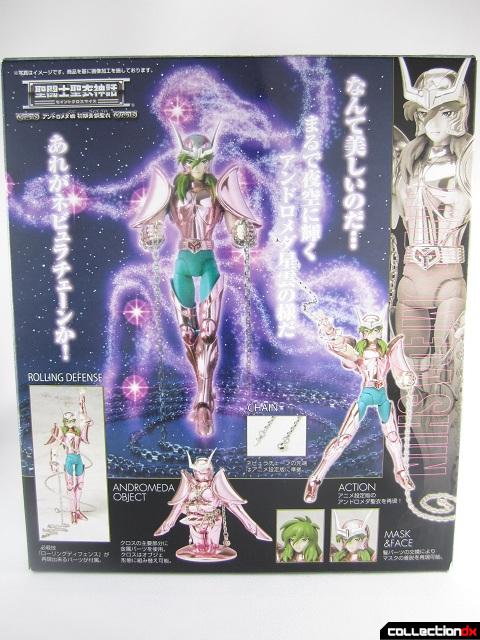 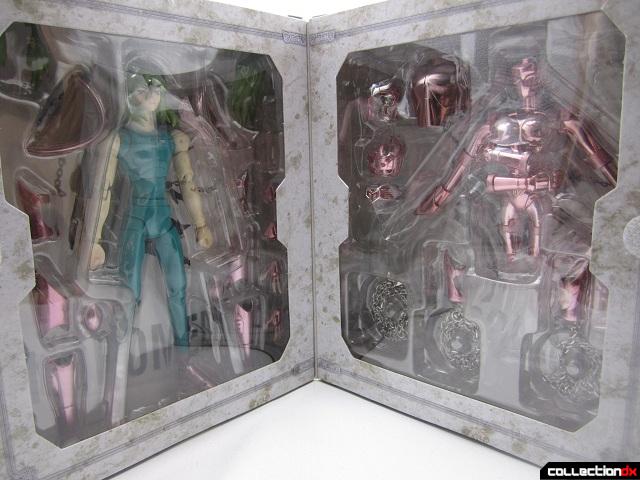 Shun's armor represents Princess Andromeda, who in Greek Mythology was chained to a rock as a sacrifice to the monster Cetus. Hence the chained-female form of the Object Mode. 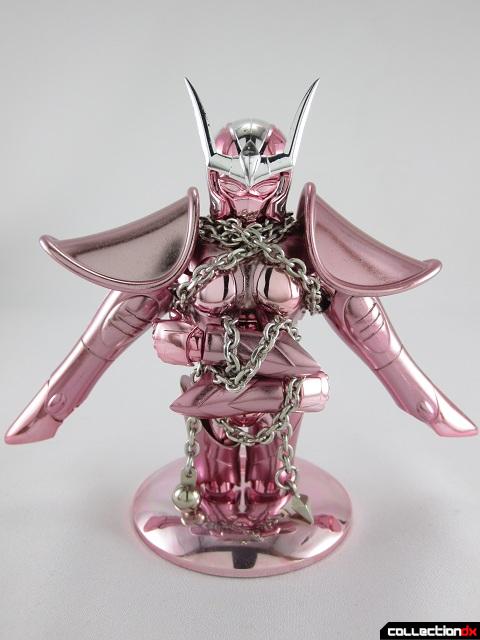 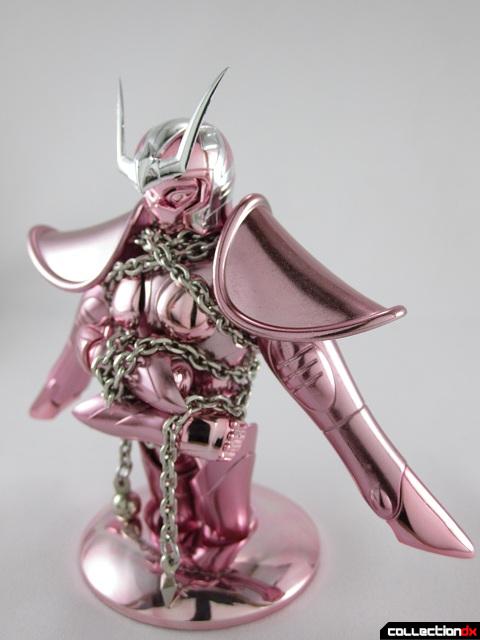 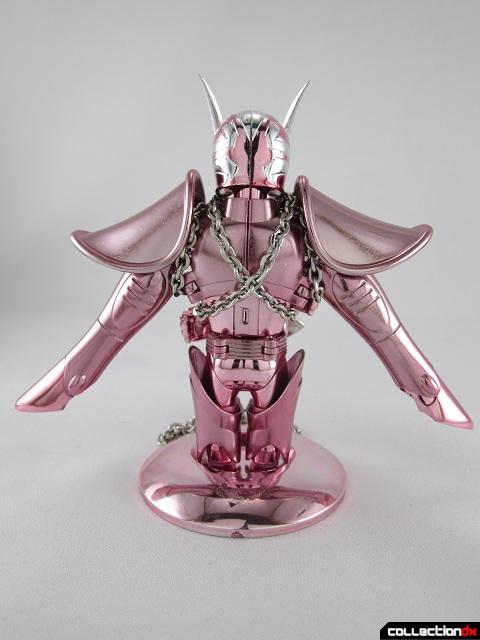 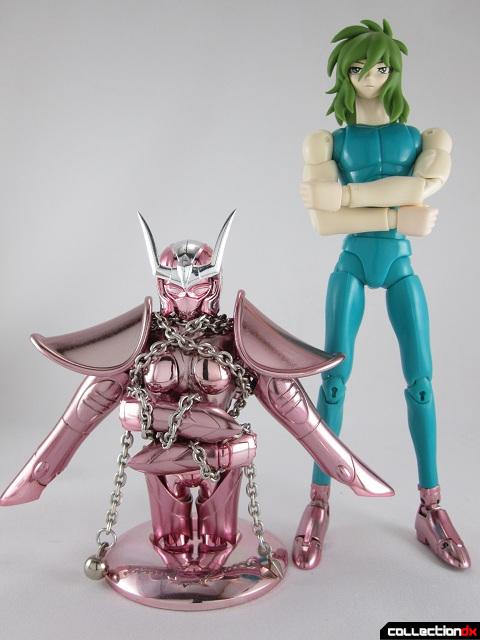 The chains for the Andromeda Cloth are said to be the very ones that were used to shackle Princess Andromeda. 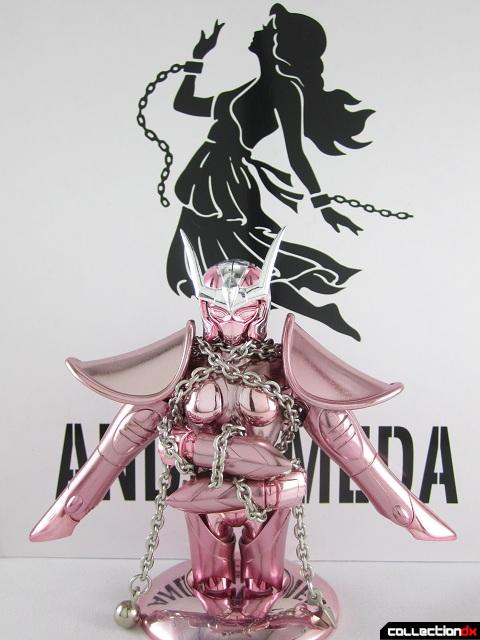 Shun is sporting a Generation 3 Saint Cloth Myth body, which means plenty of articualtion for the figure. 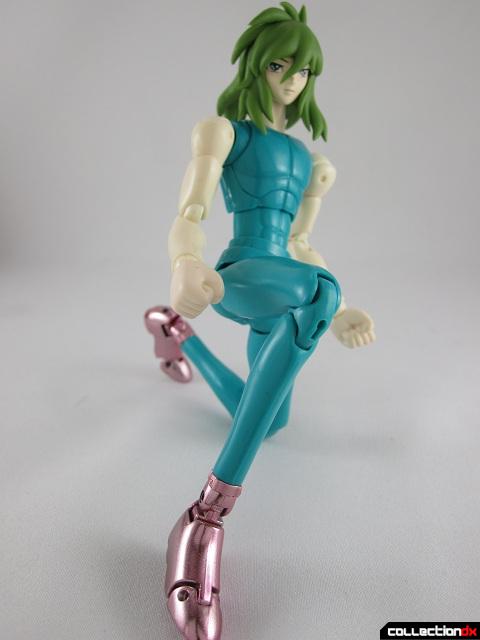 The Andromeda armor, along with Shun’s feminine looks, can cause people to confuse him for a girl; but Shun is in fact a dude. His girly looks, however, have made Shun the perfect candidate for many Yaoi Doujinshi (fan-comics aimed at female audience that focus on male relationships, in their many forms).In fact, the all-female, manga group, CLAMP started out as amateur artists drawing Saint Seiya Yaoi Doujinshi.

Although Shun is a gentle soul who is reluctant to fight and hurt others (a quality that later plays a major role in the story), he is quite strong. When he is pushed into a corner or is forced to defend his friends, Shun can hold his own ground.  During the Sanctuary Arc, Shun uses his chains, which can traverse time and space, in order to break the illusions of the Pope over the Temple of Gemini, allowing the Bronze Saints to advance in their race against time to save Athena. 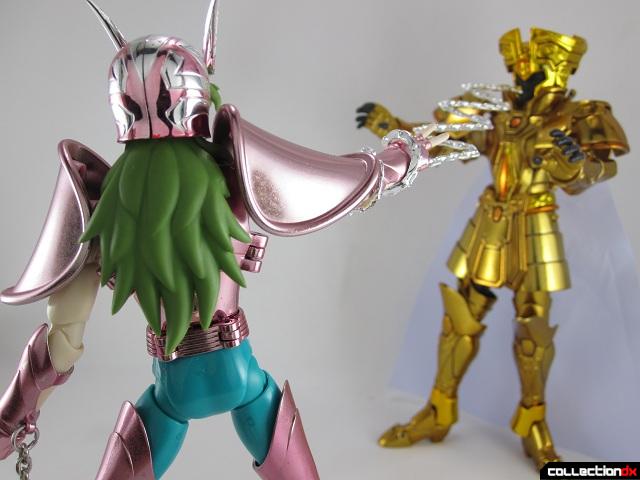 Shun later proves that he is not a one-trick pony who needs to rely on his chains to fight; when he unleashes a deadly attack of highly compressed air known as  the Nebula Storm on Pisces Aphrodite, the Gold Saint guarding the very last Temple of Sanctuary. 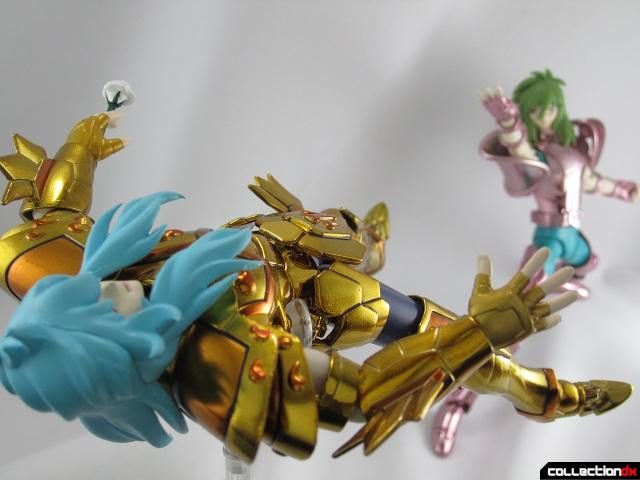 This armor is modeled after Shun’s first armor in the anime series. 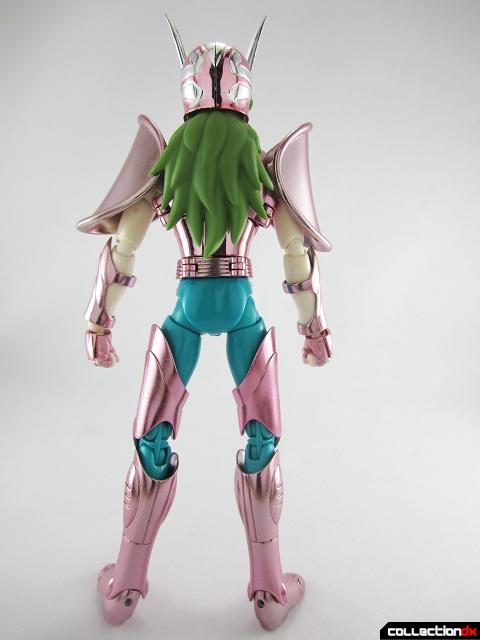 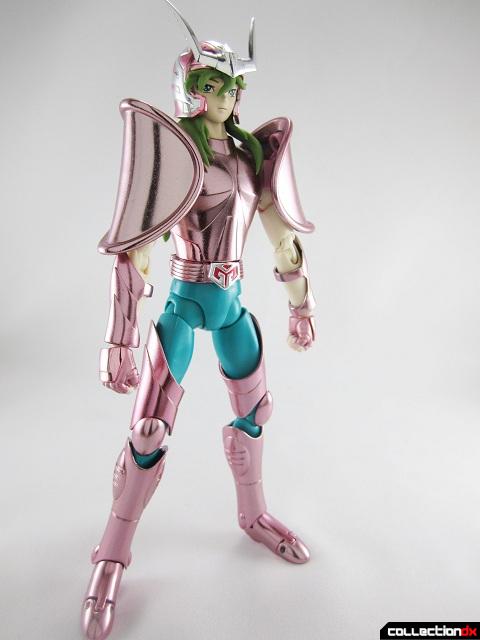 Andromeda comes with two sets of arm guards. One set has his signature chains attached to them. 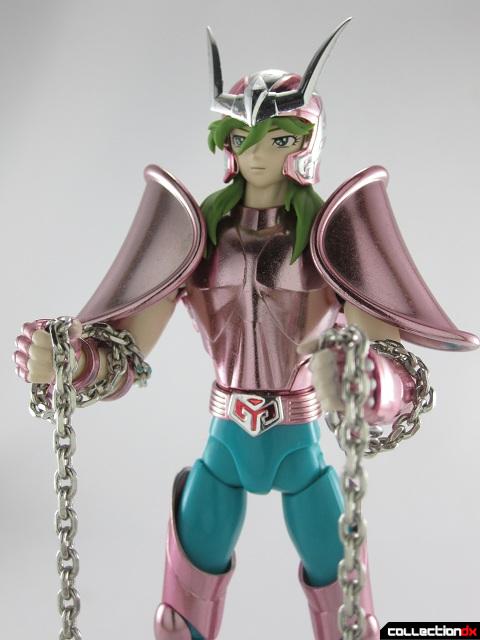 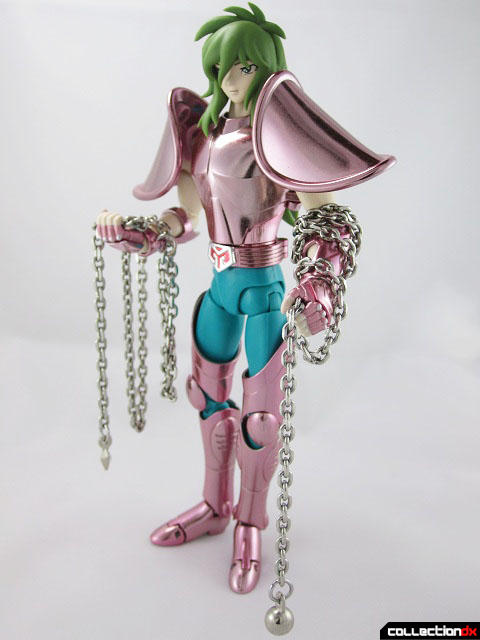 One thing that I wanted to do with my Andromeda figure was pose him making circles around himself with this chains. In the show this move creates a deadly defensive perimeter around Andromeda, who could viciously attack anybody that dared enter into his space.

The back of the box clearly shows the figure being posed in this manner.

This is the closest I could get to posing Andromeda like that . I had to use his extra chain for the Object Mode and a little camera magic. 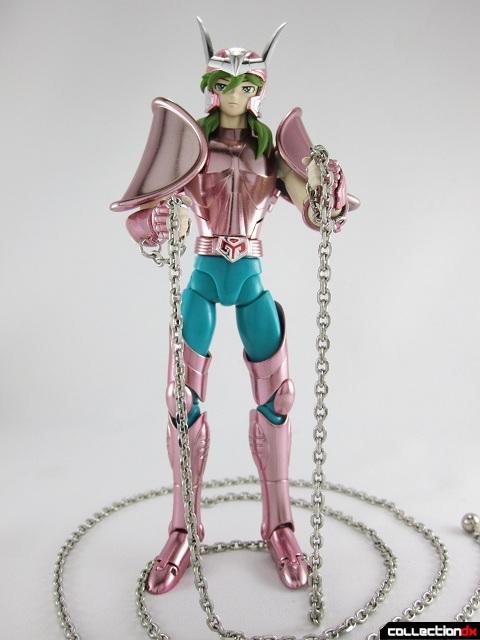 Then this shot was taken using only the chain that is provided for the armor. 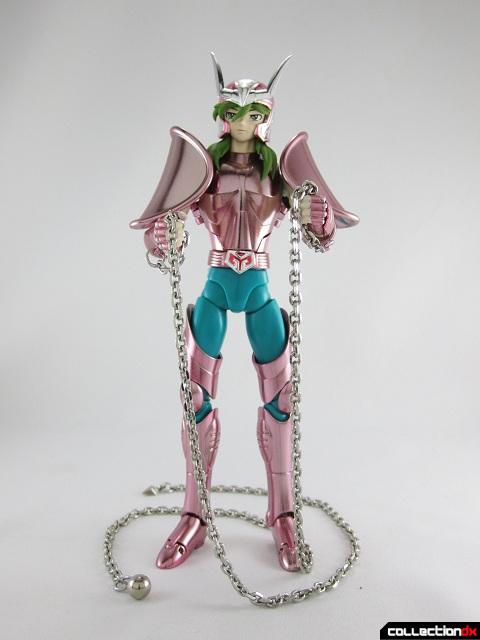 Nowhere near the intimidating defensive perimeter that Shun can create in the show. Anybody else ever bummed when toy makers show us cool promo pictures or box art, only to find out the figure can’t deliver?  This was one of those moments for me.

The other set of armguards do not have any chains attached, but allow you to attach a couple of effect chains. The one for his left hand is a spiral chain that mimics Andromeda’s Rolling Defense. 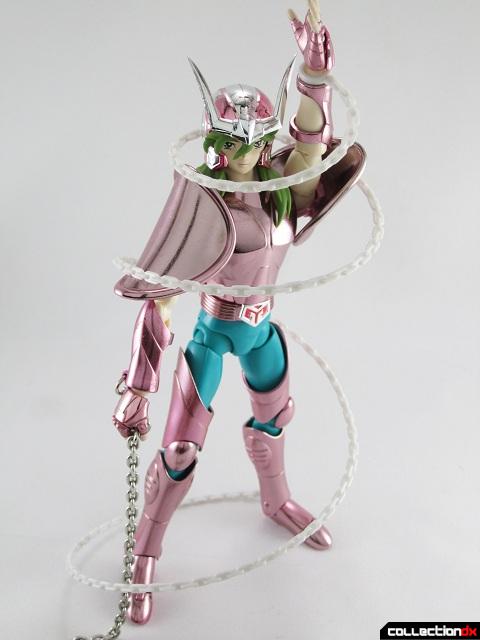 Aesthetically it looks is pretty poor.The light grey/white of the chain, combined with the soft plastic material, the lack of holes in each chain link, make it look very little like a chain.  While I realize that a metallic silver paint would probably break due to the stretchiness of the chain, I don’t get why Bandai didn’t give the chain a darker grey paint job , like they did with the V2 Andromeda.

The other effect chain, the right hand’s Thunder Wave chain, fares much better. This one has a metallic silver paint job and individual links, making it look like a real chain. 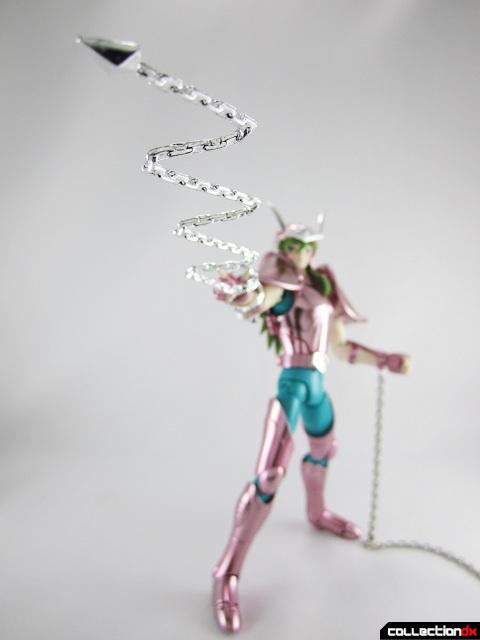 Unlike some of the other V1 Bronze Saints, Shun’s face sculpt is an improvement over their Final Bronze Cloth (V3) Counterparts. His face and hair sculpts are a bit sharper. Another subtle difference in the face sculpt is that the line used for the mouth is black, making it look more masculine than the V2 and V3 releases that  used pink. 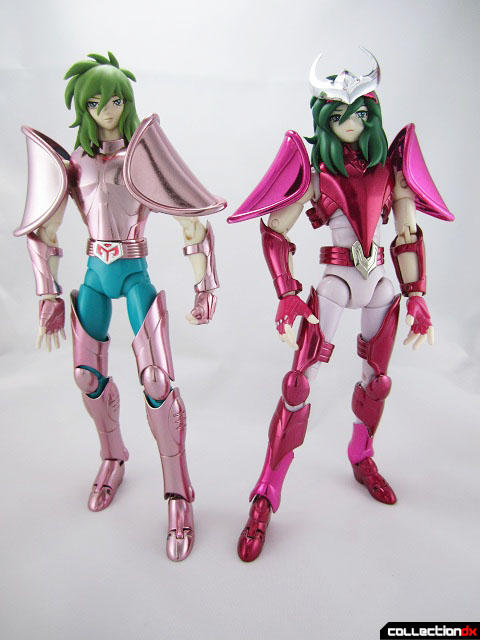 While the head is a slight step forward, Bandai took a step back with the color of the hair. Bandai decided to go with a lighter green , unlike the dark green of the other two Bronze Cloth Andromeda releases; makign this release a little innacurate since Shun's hair color is a dark green in the show. The hair color of this release  is a shade of green akin to Ophiuchus Shaina's hair. Heck, this release of Shun could pass for Shaina’s twin brother! 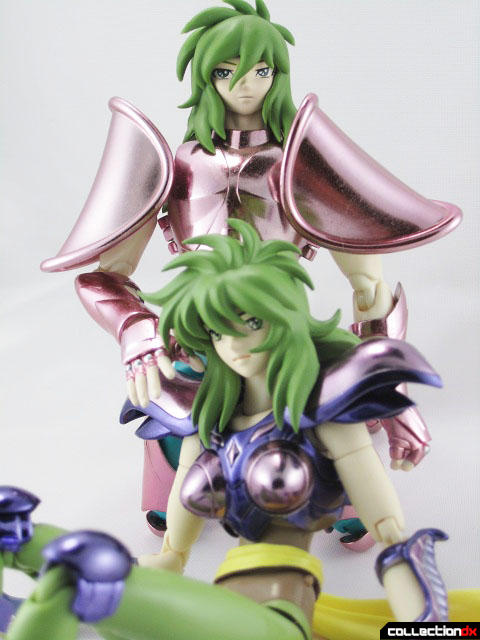 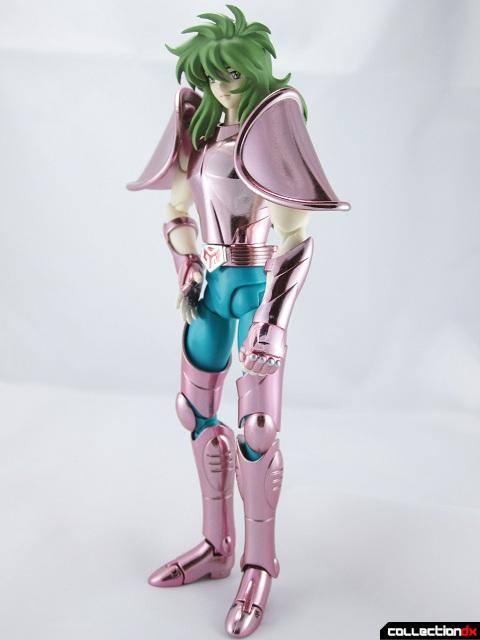 Another design flaw that I found with this figure was how Bandai engineered the armor for the lower legs. It flares down from the front, and goes back around to the back. The issue with this is that the armor covers the ankles of the figure. This leaves very little room for the feet to move laterally. You are left with feet that basically point towards whatever direction the lower leg armor is facing. It almost feels like his lower legs are wearing a cast. 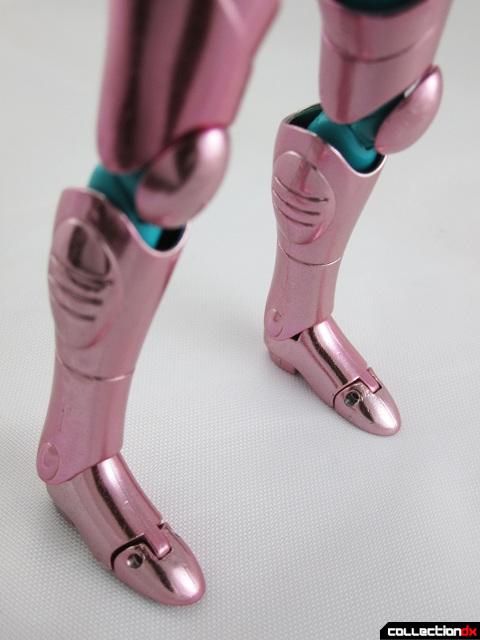 This release of Andromeda Shun is chock-full of diecast!  Only the helmet, the armor the wraps around the lower back and abs, the buckle, and the covers for the top of the hands are made of plastic. The rest of the armor, including the non-effect chains, is made of metal. 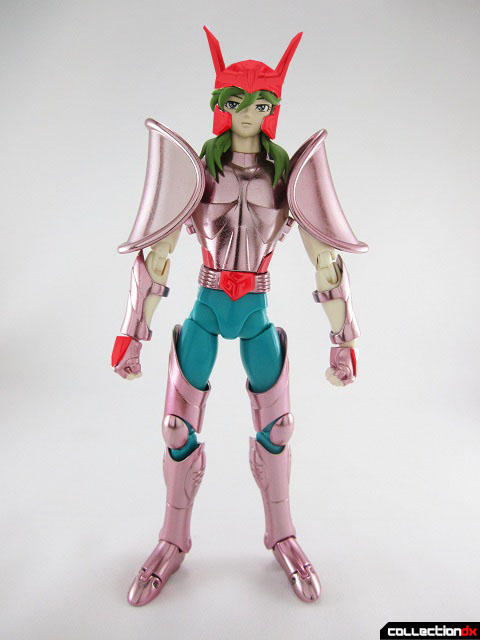 The charm of this release, however, comes from the fact that this is the armor that Shun wears the most in the series.  As a kid growing up with this show, this is the armor that I remember the most. Sure, I was impressed when they revealed the V2 armors at the beginning of the Asgard Chapter, but just looking at this figure reminds me of all the great things that happened in the during the Sanctuary arc.

I dig the 'reverse diecast diagram." Keep up the great SS reviews!

Ah, this was the only guy I bought when they brought them over to the US awhile back. Except the one I got was in black armor with blue underneath (one of the basic figures without removable armor, though). Really like the simple armor design. I'm assuming the one I got was some sorta evil version, though, since he looked all angry 'n stuff.

Enthusiast- Thanks for the words of encouragement, and I will keep the Saint Seiya reviews coming; my goal is to cover all of the canonical Saint Cloth Myth releases . So just about every figure except the Asgard characters, the Steel Saints and Crystal Saint. Nothing against these characters, or their Saint Cloth Myth incarnations, but I had to draw the line somewhere ( for the sake of my wallet).

Alexx- You are correct. The one that you got was Black Andromeda , one the henchmen of Phoenix Ikki,