If there's three things in life you can count on; it's death, taxes, and Macross toy repaints. While many of the Valkyrie fighters are officially colored in several exploitable schemes, the YF-19 from Macross Plus has at best a measly two variations that have ever had screen time. Which brings me to one of my favorite exercises in toy making and that is when the guys in charge just start making stuff up to squeeze a few more releases out of a toy. While a lot of people certainly bought the main release and maybe a few picked up this guy from a bargain bin, that's only two color variations. There's about a few dozen VF-1 variants, the other Valkyries need a little helping hand.

And if you were curious as to where the name "Double Nuts" comes from, here's the story straight off the back of the box:

The fourth YF-19 prototype incorporated further design tweaks based on testing by done with the third prototype. This particular prototype was used heavily in testing Fold Booster operation in deep space. While the second prototype did some testing with the Fold Booster, further deep-space testing with the fourth prototype was done from the ARMD Class Ship "Raihou." Testing continued even after the VF-19 was put into production. Because of this, the VF-19P Patrol craft was a viable evolution of the design. The third and fourth prototypes use a similar paint-scheme with the orange changed to a more traditional blue. Lastly, the No. 4's test pilot was Captain Amy Cunningham who was a direct descendant of the VF-0's test pilot, Oliver Cunningham. As such, No. 4 was given the nickname of "00" or "Double Nuts." 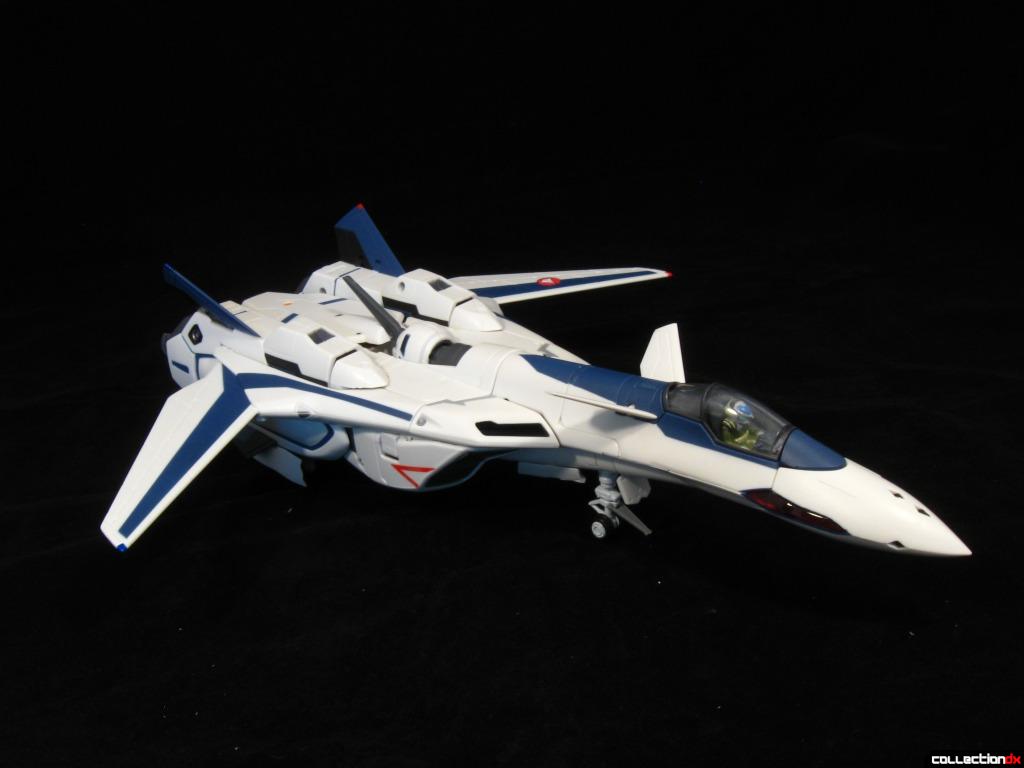 And so we have the Double Nuts. While the overall paint scheme is not much more than a palette-swap of the standard YF-19, it is still quite pleasing. The whole body of the airplane is done in a matte white plastic. Also you can see the pilot figure is now done in a more traditional green flight suit. Captain Amy sure is a real looker inside the cockpit. 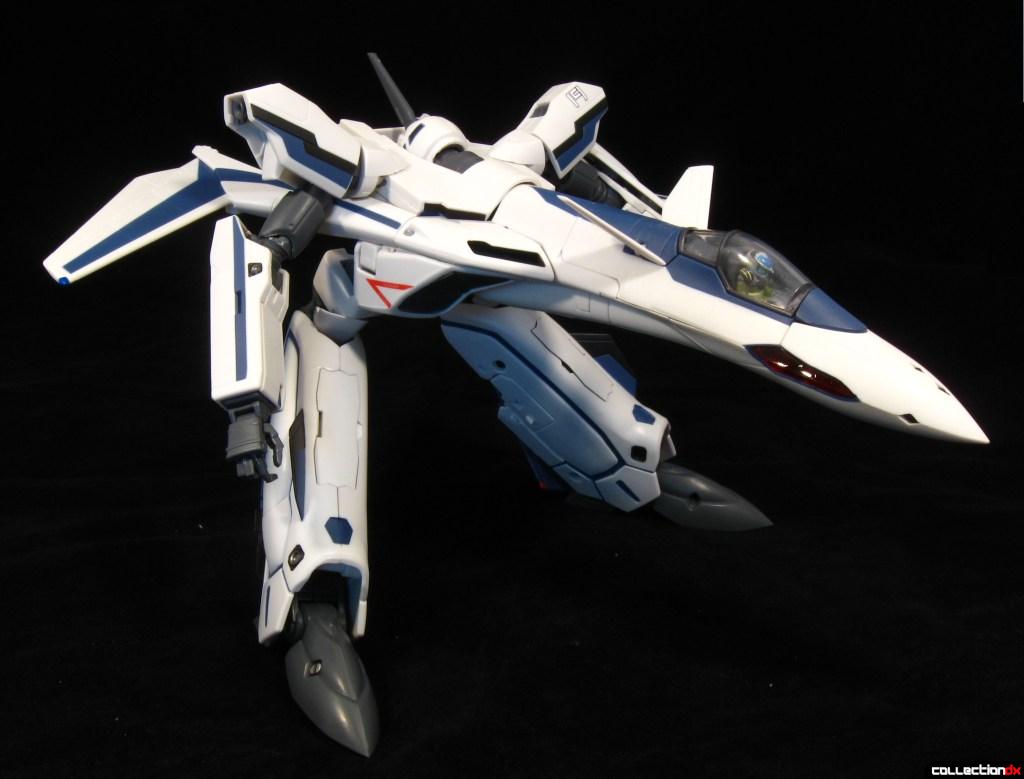 Gerwalk mode is where some of the subtle improvements to the toy are put to good use. Yamato has touted that the current wave of YF-19 toys have much tighter joints and I can certainly feel it in this toy. They didn't really change the design so much as tweaked the tolerances and improved the overall build quality. 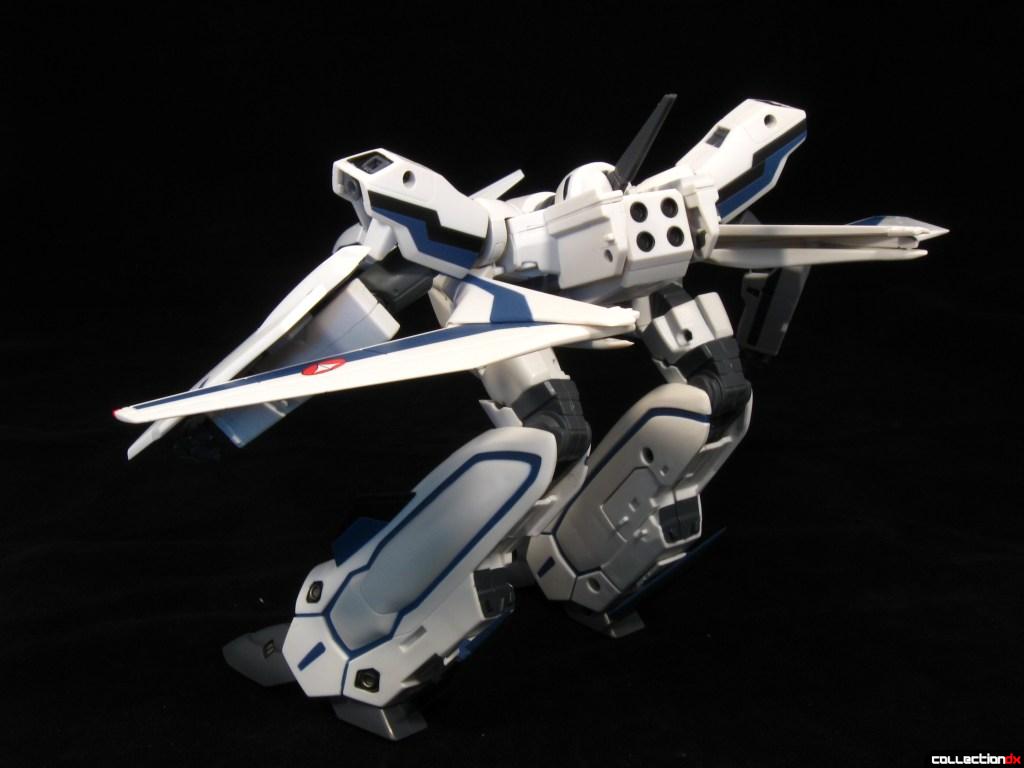 With just the tighter joints, Gerwalk hangs together somewhat better than the previous releases. The torso and arms still simply hangs over the wings, but this is more of an issue with the base design. Still, the tighter joints make even this mode more stable. 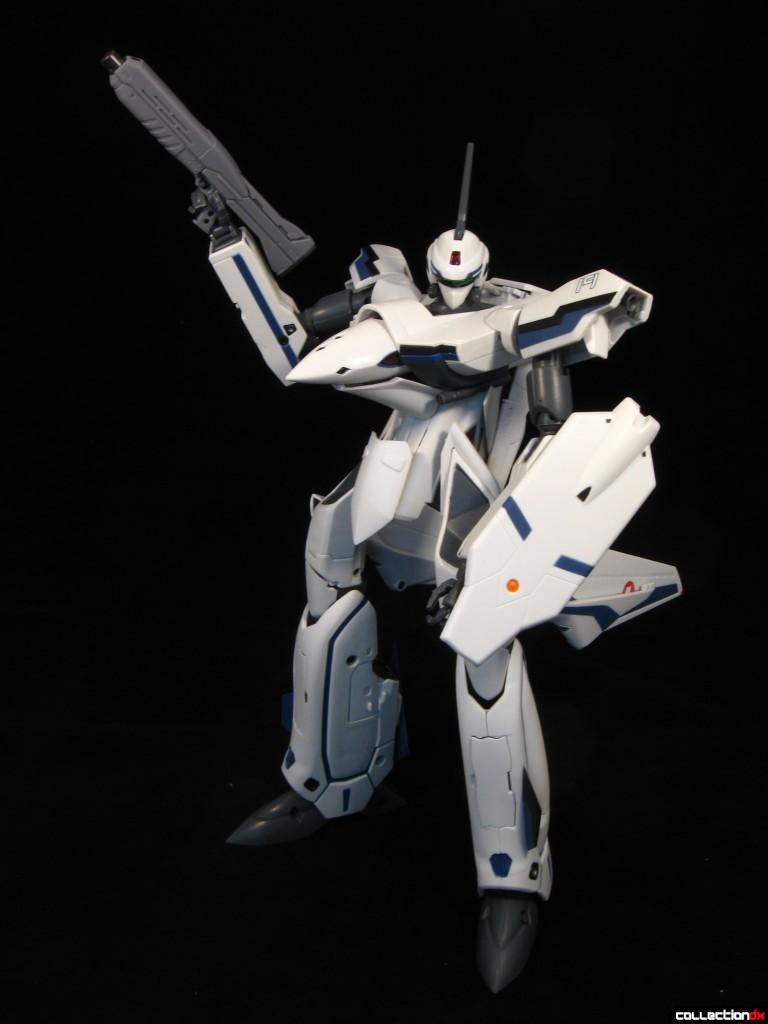 For me there is something about these colors that suit the YF-19 design even better than the standard tan. The white warrior stands over a foot tall and comes with its signature gunpod and shield. 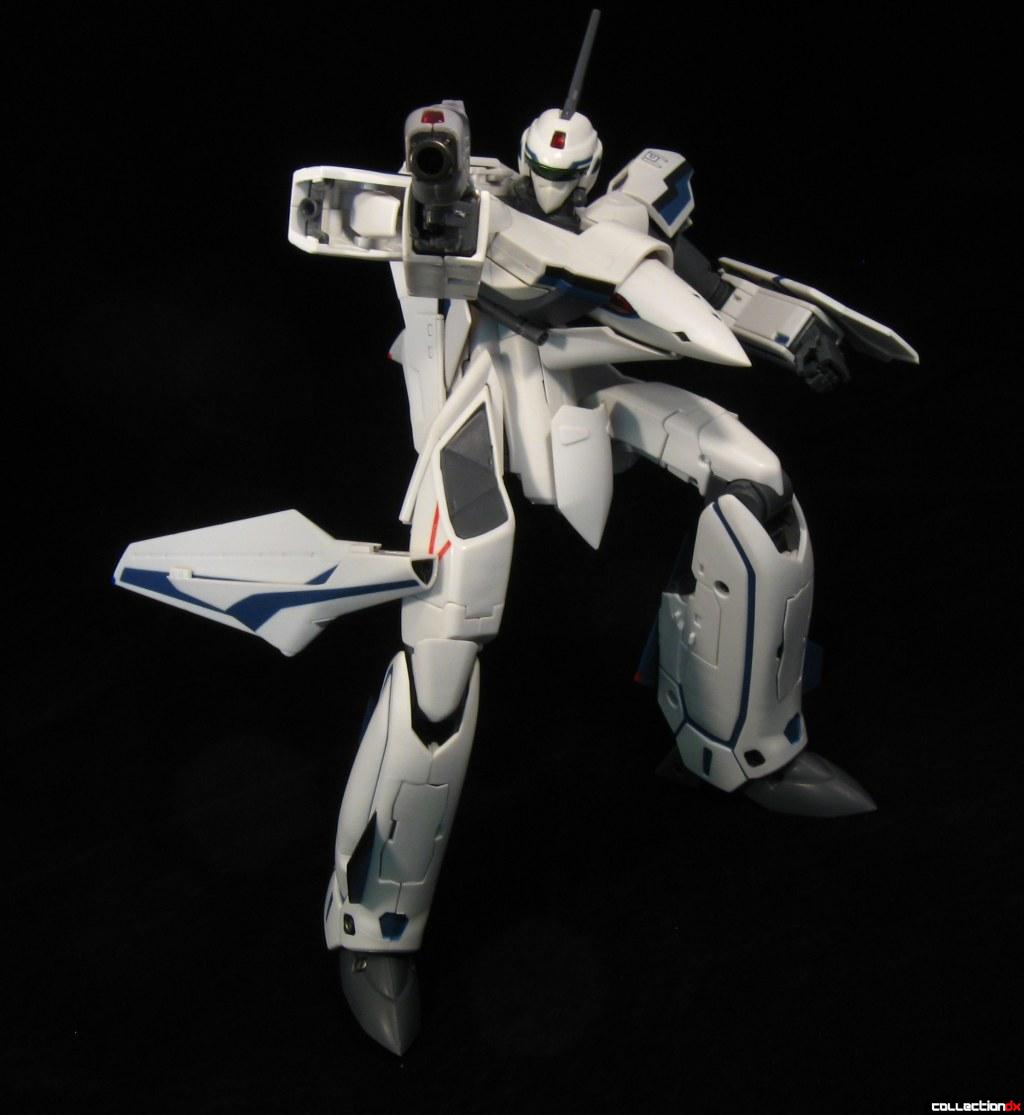 The tighter joints are an immense improvement for Battroid mode, allowing the figure to maintain a dynamic pose. 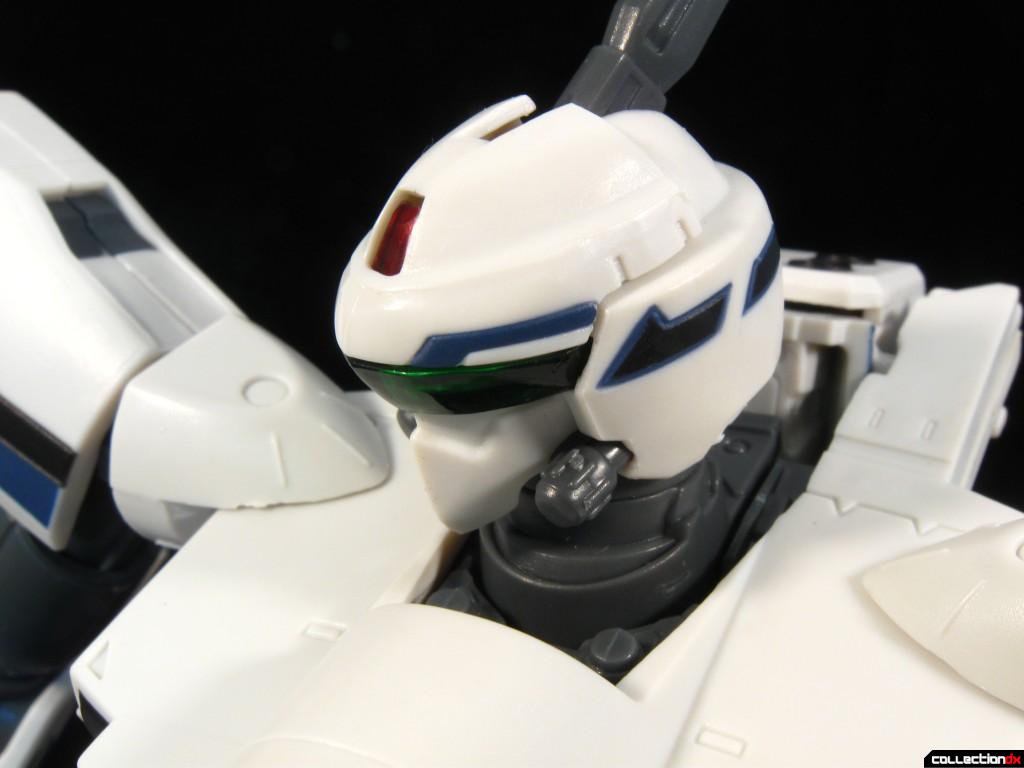 I absolutely love this color scheme. From the whole body and right down to the face, it all just works with this design. I do have one small nitpick and that is the clear parts are a bit too "rich" in color. On the 25th Anniversary YF-19 you can see the eyes beneath the visor, whereas the Double Nuts's solid green doesn't let any detail through. Still, it does look damn good. 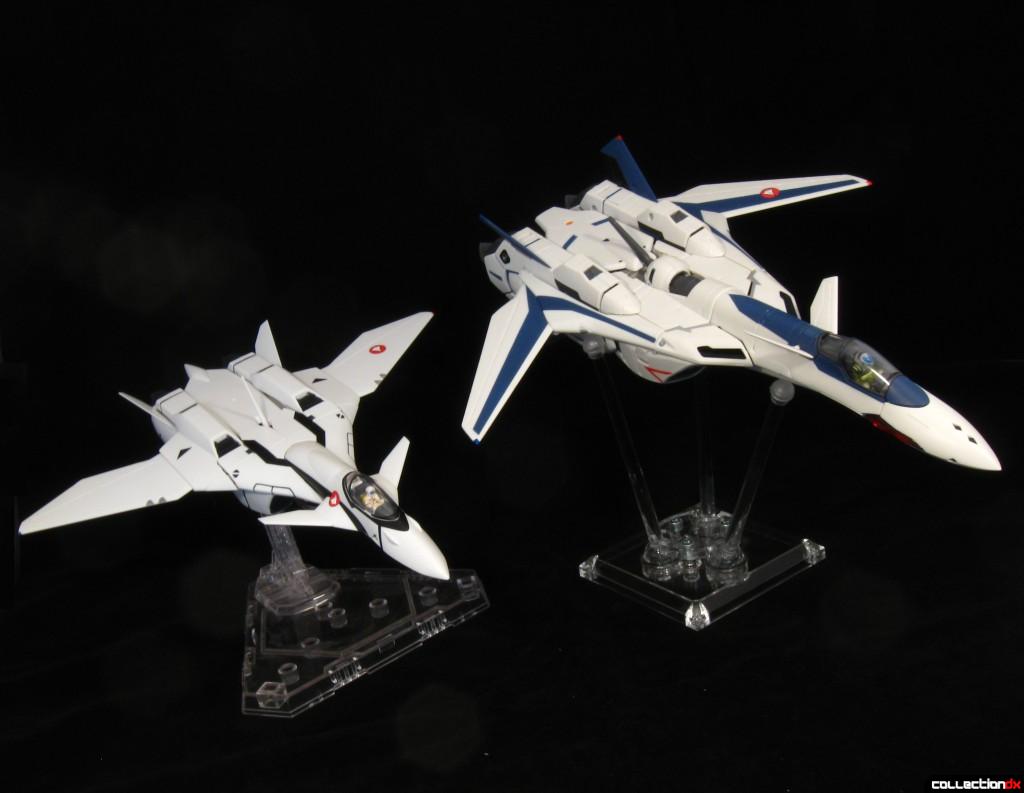 Double Nuts really fits in well with other white Valkyrie toys. You can almost see this one leading a squadron of the excellent VF-11 toys. 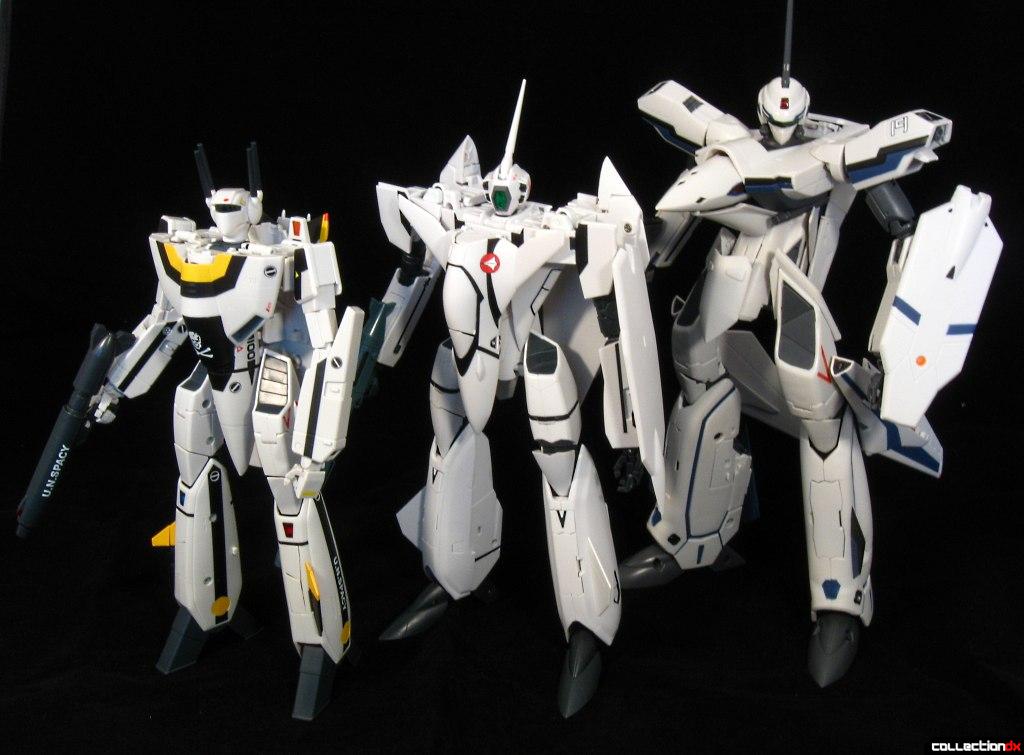 In many ways the VF-19 is one of the true successors to the VF-1, and the Double Nuts represents Yamato's toy line as it matures into the next standard for Macross toys. Having designed and produced six totally different Valkyries for their 1/60 scale Perfect Transformation line, we have seen the coming of a stable line of figures that can and are being re-released again and again to meet demand. I enjoy both my YF-19 toys and I feel that the Double Nuts is a fine addition to my squadron.

17 comments posted
The Double Nuts is still my

The Double Nuts is still my favorite YF-19 toy representation.

I'm a total sucker for the blue/white paint scheme on VFs. Max's TV VF-1A is my all-time favorite, and this looks like a good match for that. I've never really liked the YF-19's battroid mode, but this could tempt me...

You'd have to be DOUBLE NUTS to pass on this awesome toy! Ahahahurhurhurder.

It's the best color scheme for the YF-19, it really brings out the beauty of the design. I have my eye set in this thing since it was first announced, sadly it's on the very expensive side for me and have yet to see it on sale.

But I won´t loose hope that one day I might get it, I also loved the GFFMC Z plus blue, after reading the review here on CDX and watching how awesome that thing was. I remember thinking how unlikely was to get such a cool Gundam, yet almost a year after I was able to purchase one!

Thanks for the review of this Valkyrie. Now I know it's totally worth getting it.

The Double Nuts and the GFFMC Z Plus Blue go well together. I think the Z Plus blue's got a brighter white than Double Nuts which has a tint of grey to the white. Nevertheless, they still look good together.

I got a pair of YF-19 (Duuble Nuts and Bird of Prey) in Hong Kong for almost exactly USD100 each ;) but the 25th anniversary black version is a bit more pricy, about USD130.

These things go on sale from time to time, check often and browse on the internet, a good way is to copy the Jap charcter of the name and try google with it, you sometime get real bargain by doing so -- I got my 1/12 purple scopedog for 5000 yen (shipping not included)

That's pretty informative tip to save on some Otaku tax for customers. Thank you alchemo, I'll keep that in mind when I'm shop-surfing.

I'm not too hot about the 25th anniversary stuff. The color schemes remind me of tar & licorice bars.

The YF-19 was and still is my least favorite Valk design, but in the interest of having one to go with my YF-21, I went with this one. I love it. Never was on board with the brown paint scheme...but this one rocks.

Well, It does feel good to get the latest items especially if it is an item you really like. but sometime if you are willing to wait a bit you'll get it with a bargain. I got nine 1/12 ATs and except the Brutish Dog I got all of them under or around USD100. even the Scopedong II with round-mover.

Certainly sometime you end up without the item that you want - I did not buy the GFF Metal composite 1002 Psycho Gundam when it was released and I never find it until now.

Anyway, the Double Nuts is exceptionally good looking and the Bird of Prey is not bad either. joints are firm also. As I really don't like the 1/60 rendition on the YF-21 and VF-22, I can get more of the YF-19 instead (don't have the original one though).

I'm really glad to see the gunpod straight. Some men might be distracted by "new color schemes" or "tight joints" but I know where my priorities are: phallic machine cannons on giant transforming airplanes.

If you're talking about the stand with the 3 pillars on ball joints, those are from www.flightpose.com

Did they add any locking mechanisms or latches to hokd it together? As I recall, nothing holds the parts rogether during Gerwalk on my reissue, among other such prblems. They should also strenghten the racheted feet; they collapse under the weight with both the 19 and 21 reissues.

This toy is the same as the original release in terms of construction. The joints are just tighter.