Rarely do I hate a toy. I can usually find some redeeming value in most every toy I get, or be able to find some reason why one type of collector would want it. You have to respect, at the very least, the work someone put into making the item in question.

That is unless the person put in charge of the toy was HITLER. 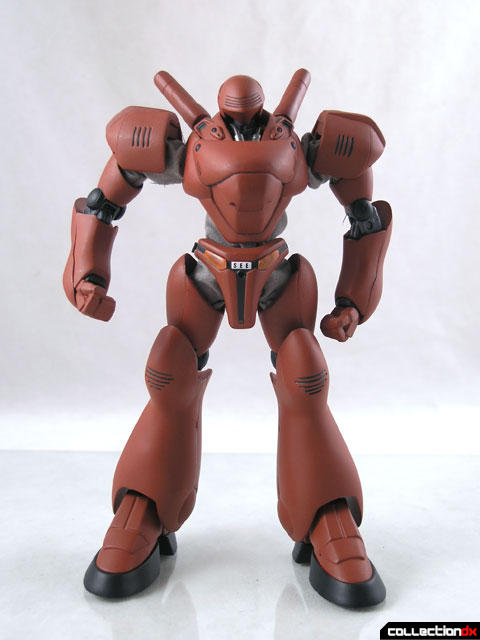 That’s how I feel about the CM’s Mechanical Action Series Brocken Labor (OVA VER). I feel as though Hitler came back from the dead, or maybe possessed the soul of a designer over at CM’s while making this toy. One would think that any toy would go through SOME sort of review process before making it to market, but apparently this one got out of the factory and into stores without one competent person looking at it. It fails on almost every level. 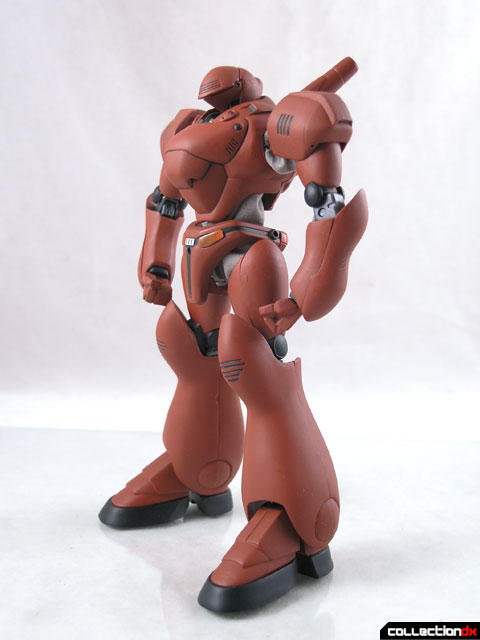 The thing that kills me is that I should have known. After the debacle that was the AV-0 peacemaker, I just should have stayed away. Then this came in a box of samples, and I figured I would give it another try. I mean, they had to have learned some kind of lesson from the first one, right? 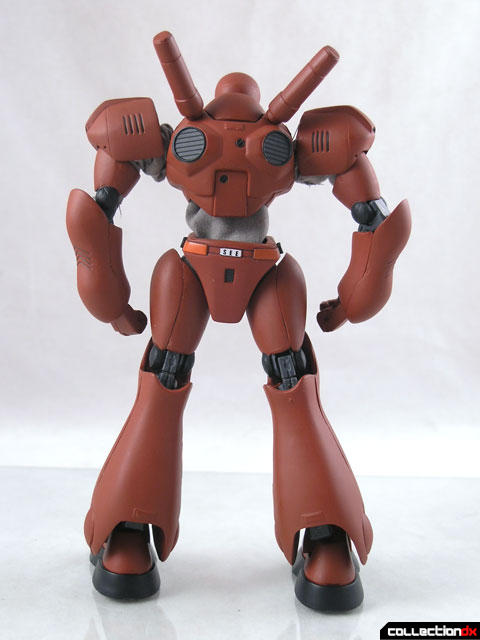 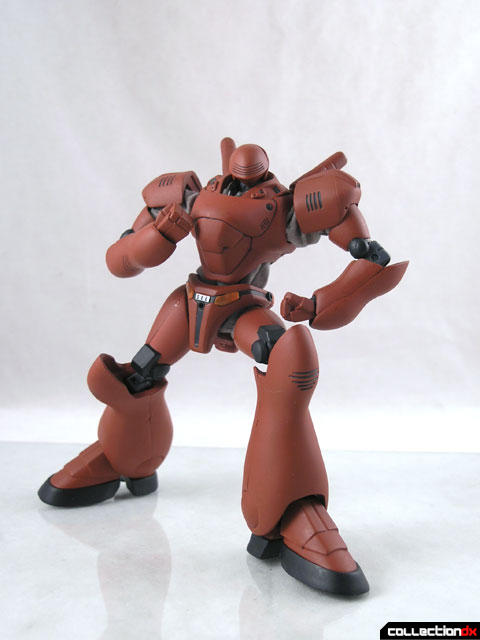 Not only did they not learn a lesson, I think they actually made a crappier toy.

The idea behind the MAS is a sound one. Make cheaper toys of less important characters that are in scale with those that got the Brave Gokin treatment. With the proper material and construction, this would not have been a bad idea, as each of CM’s Brave Gokin releases is great. 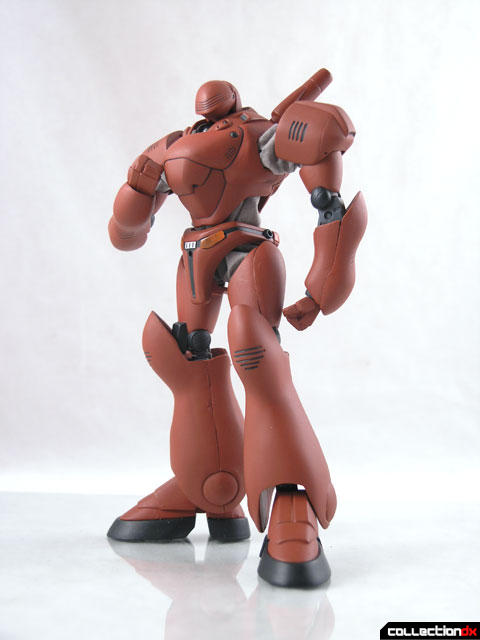 Each item in the line (at least the Patlabor ones) is made out of heavy, doughy PVC with a common joint system and cloth joint covers. Think of it as an oversized Revoltech, but none of the joints can hold any weight. Each joint is just too small. 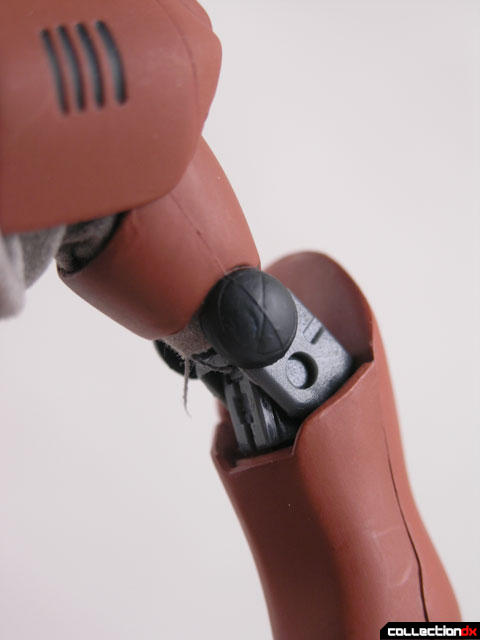 Lifting the toy out of the tray for the first time, the legs and an arm just fall off. They aren’t broken, they just disconnect. Repeatedly. Get one leg on, the other falls off. 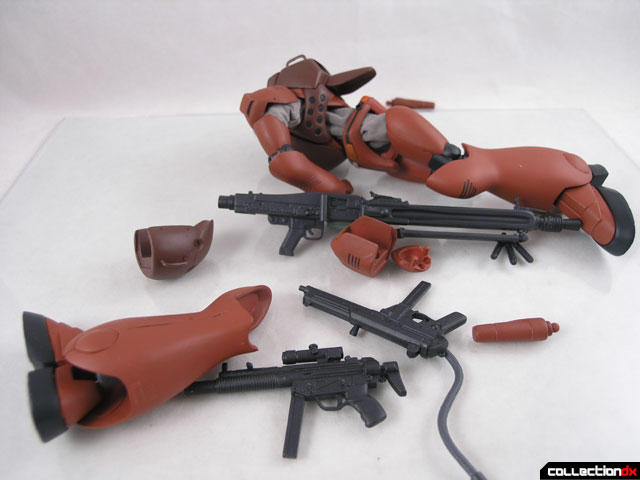 A tried-and-true method to tightening up loose joints is to put clear nail polish on each joint, let it dry, and reassemble. I took the entire figure apart and coated the joints. 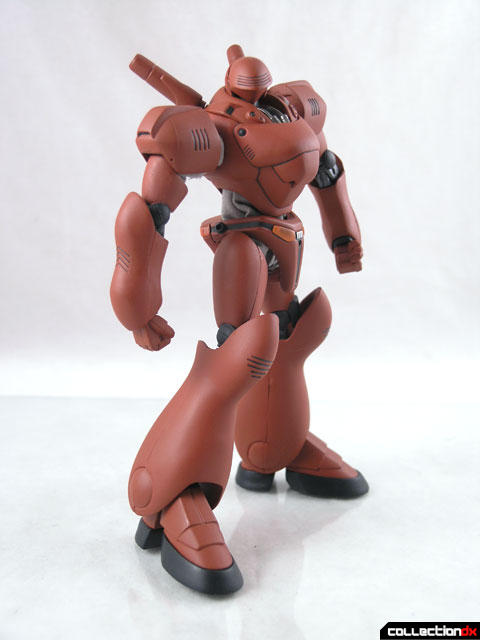 Some joints are hidden behind cloth sheaths, so they are inaccessible. That does not keep them from disconnecting. At times the shoulder will disconnect, looking like someone just broke a bone beneath the skin. The cloth is glued to the parts, so if you just can’t get the part to stay, you will inevitably tear the arm off in frustration. 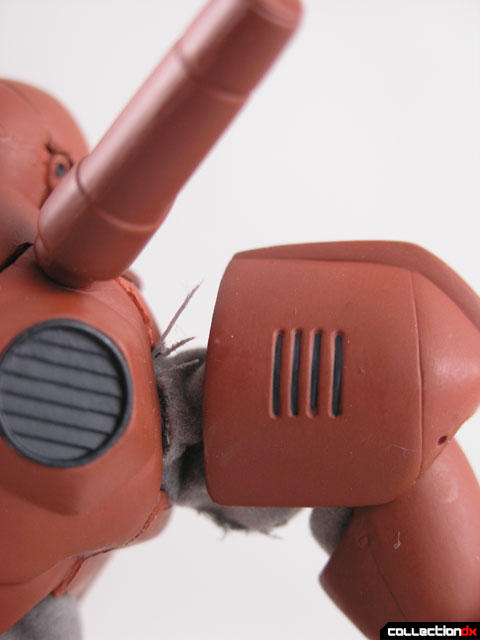 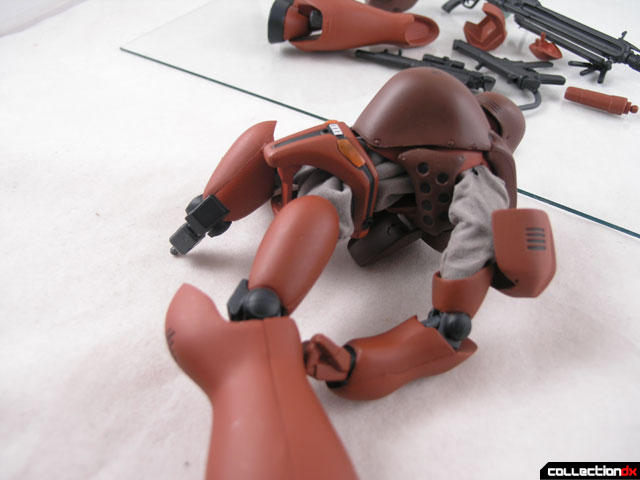 The nail polish does little to tighten the joints. The arms and legs are solid PVC, which can get quite heavy. Each is molded out of two solid parts that are glued together, with obvious seam lines and glue spots. 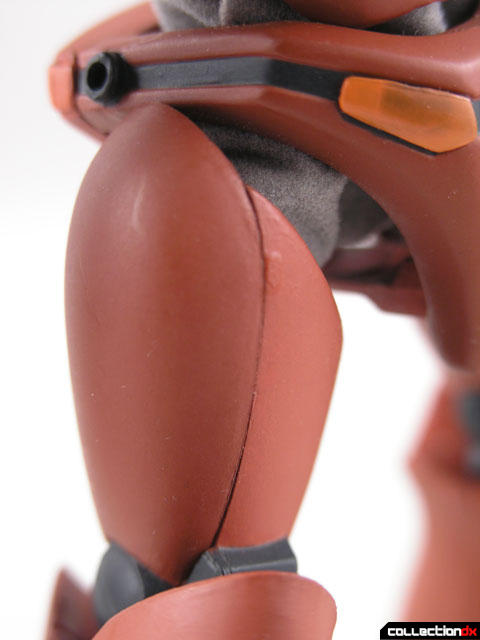 The parts finish is a matte red, which apparently picks up every bit of oil from the Chinese factory workers. Out of the box, it looks like crap. 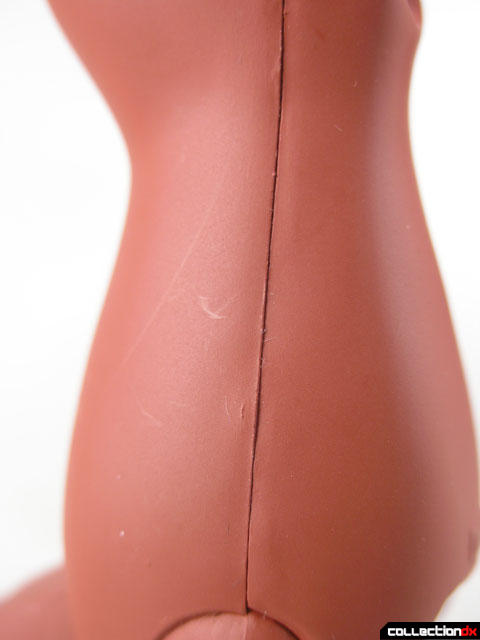 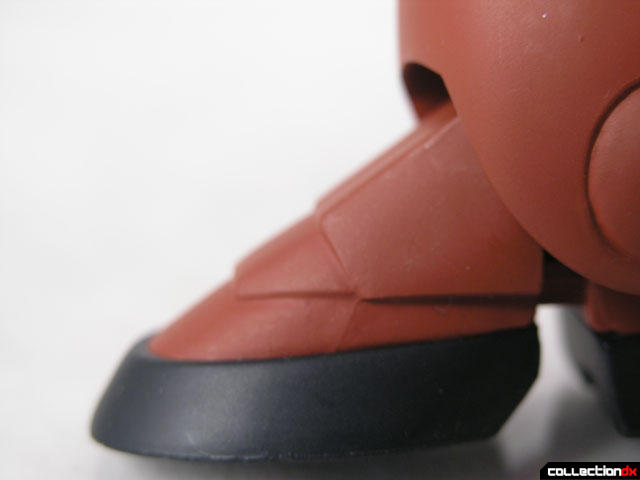 Wait, the suck does not stop there. The Brocken Labor comes with a set of optional armor parts that has its own share of crappiness. 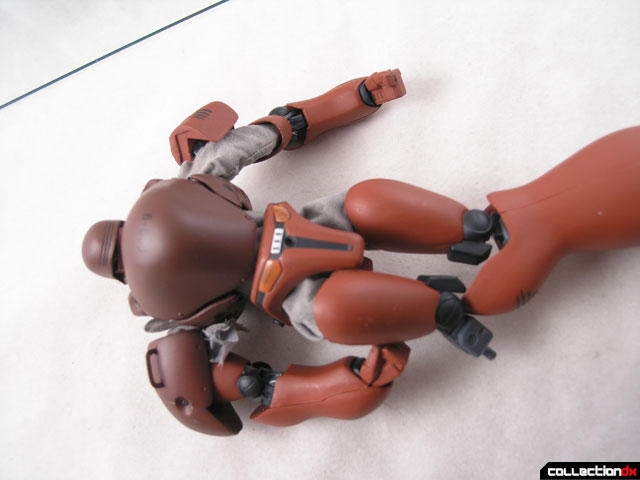 The part that connects around the chest looks like it was not sprayed all the way, with missing paint on the back. 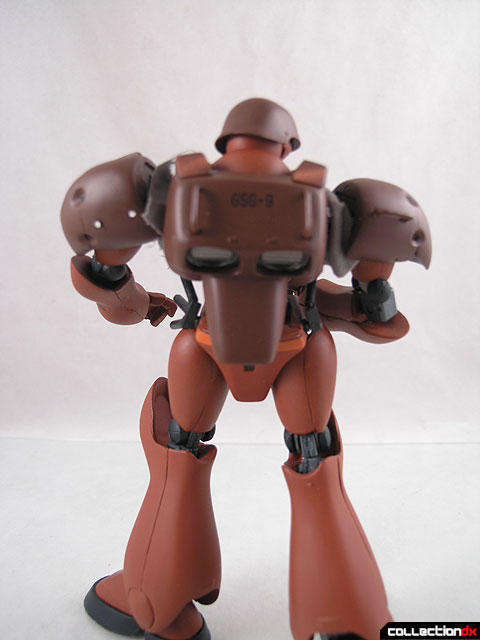 Probably the most frustrating parts were the shoulder armors. Instead of clipping OVER the existing armor, you have to replace the parts. Of course, they are on tight, so you will without a doubt dislocate the cloth-covered joint, or even worse, tear the arm right off, like I did. 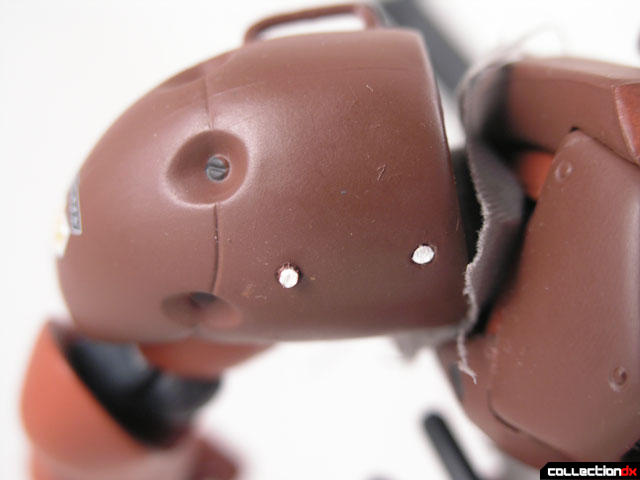 There’s an alternate head cover that is hard to get on, and when it is on, looks like a German WWII SS robot soldier. See, I told you – HITLER. 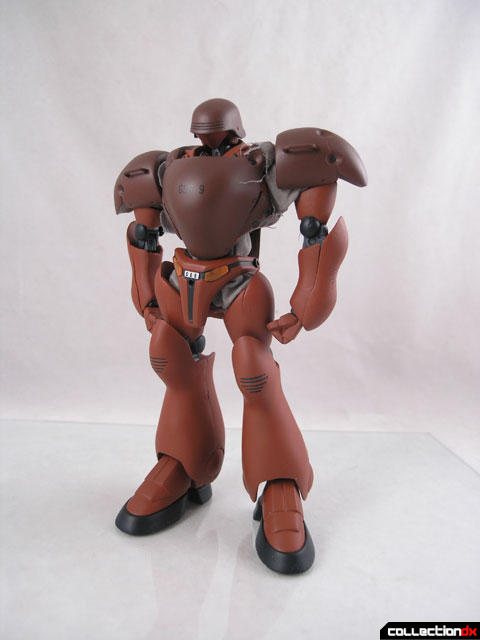 All of these things make me rage to no end. What makes it worse is that I actually really like the design of this thing. 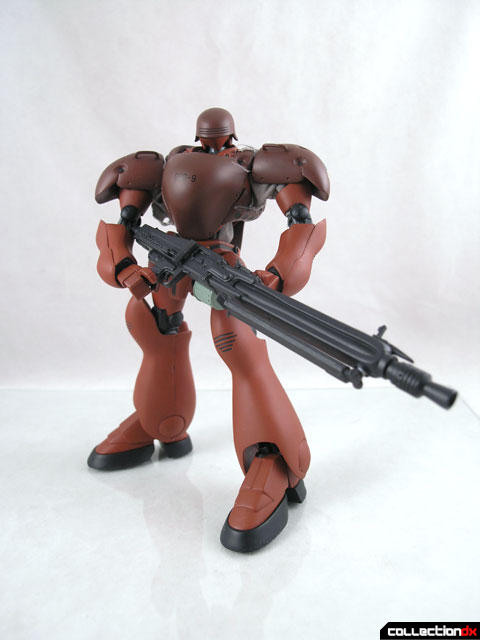 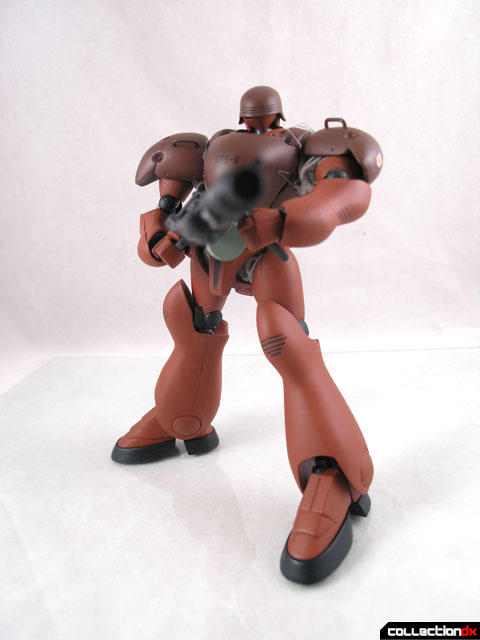 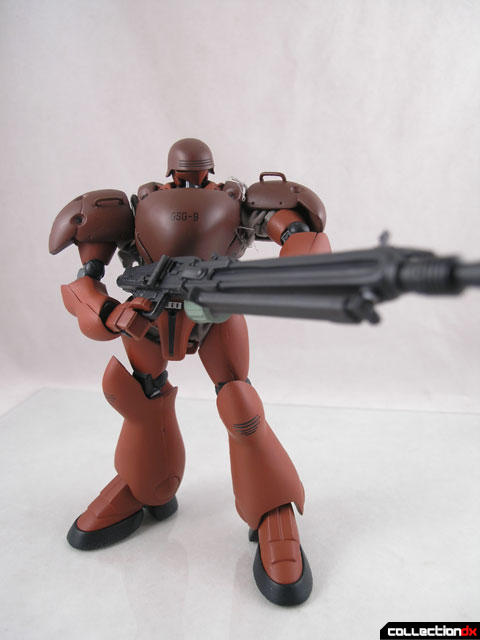 If it were done in metal and constructed properly, it would be a FANTASTIC toy, but like this, I just want to feed it to my dog. 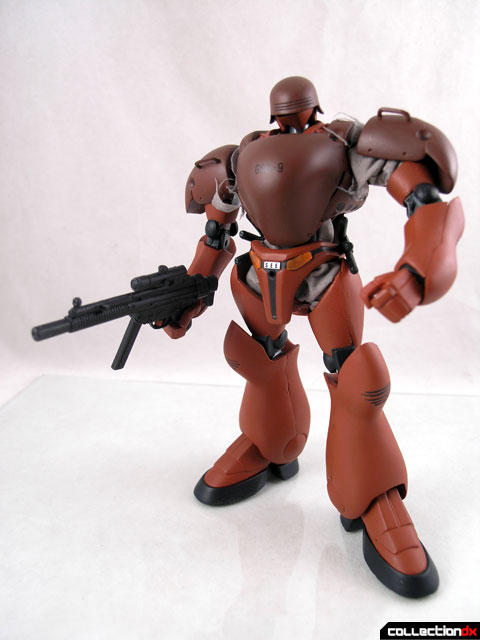 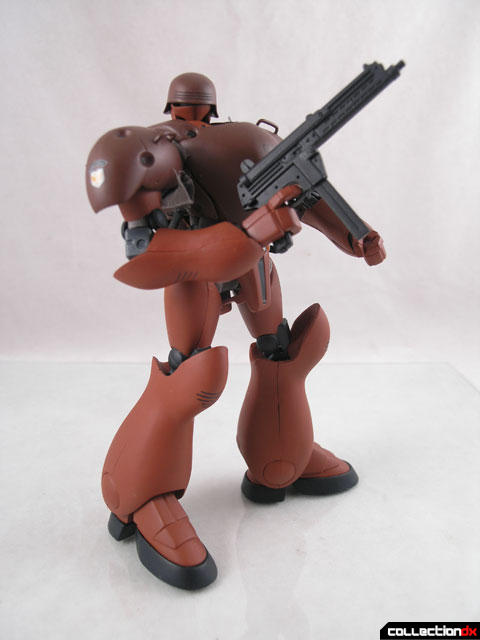 I would recommend you stay away from this toy at all costs. It’s a nightmare.

Oh, the irony is not lost on me that it is called “Brocken Labor”, which is close enough to Broken Labor.

16 comments posted
I do not understand how the

I do not understand how the company that made the Brave Gokin Ingrams can also make these. They must have two different design teams or something. The soft PVC detail and the mold lines are hideous.

More like Broken Labor, amirite? Think of the resources that went into designing, manufacturing, delivering this thing to market. They had to know it sucked. Like Ben says, It seems like there's a huge disconnect between CM's consistently terrific gokin, and their consistently awful non-gokin product.

what a mess of toy, you did well showing this terrible figure, I would never buy somthing like that, if you waste your money, definetly you sacrifice yourself for us!!.

anyway i could get this off you?

Bah, nothing worse in toy collecting than getting a figure that looks fantastic, but falls apart if you so much as touch it. That was my problem with the original MSiA GM figure. I loved it, but it fell apart at the drop of a hat. Worst MSiA I have.

I almost wish there was an unrated version before you had calmed down. The bit at 4:32 about needing "a screwdriver to stuff all that..." had me almost in tears laughing. Multiple times....I could play it now for the 7seventh time and still laugh. The disgust comes through and rightly so. I've seen nearly all of your reviews and this one is my favorite.

I appreciate reviews that help me avoid dodgy toys.... but in this case, me being a Patlabor fan means I'm still interested. Still, I really do hate crappy toys, but since this one looks so cool & I generally only pose & then display my toys in my display cabinets, for the right price he may be worth picking up... especially with the strong aussie dollar at the moment, he, he.

I got a theory for you Josh, do you think that you've bought a prototype toy that CMs decided not to beta-test it and mass produce it anyway? It's not a far stretch from a possibility.

Its not a prototype ALL mas are that crappy

Yes....of course they are....i guess that's because they're based on a shaky template that probably hasn't been beta-tested. They would've been less crappy in the open market if they're casted out from a second or third template that feels quality confident.

I have not laughed harder on your video review in a while. Most of the CM's non-metal toys are like that I think. I bought the balking and it was the same way. The toy actually fell apart before I took it out of the box. It was ridiculous and it was $75! I ended up burning it during a camping trip. I stick with the known good brands, Figma, Revoltech, Robot Soul.. haven't had problems with these toys. (My recent purchases of figma has been spotty though, a few of the joints were too tight and the peg ends up breaking when I tried to turn it.) Good luck with the Broken Brocken.. LOL

I got this toy in blue some years back courtesy of an HLJ sale. Out of the box, trying to move one leg, the joint came loose, causing it to flop and dangle like an eel with a broken spine. Hearing reports of how the parts would disconnect themselves, I thought to myself "I can deal with this" and tried to get it back together, but nothing worked. I ended up shredding the cloth surround on the hips only to discover, no, the parts hadn't simply disconnected - the soft plastic workings of the joints had simply sheared themselves in half when I had attempted to turn the leg.

Broken labor indeed. Even though I managed to get a replacement for the defective piece, I've returned all the parts and the dismembered shambles of the toy to its box where it will someday be given away to an aspiring customizer who doesn't know better, or used as a shim to prop up a piece of furniture. Everything in this review reflects the rage and disappointment this toy inspired in me.

HAH. I hadn't actually had a chance to watch the video review for this toy before posting prior; I find myself even more in agreement. The TV version is, in fact, as much a piece of shit as this one is. This toys is probably one of the most loathed figures I own, sadly, considering that the Ingrams (I have three!) are some of the most revered toys in my collection. I really wish this could be a better toy because I love the Brocken, as I love all the mecha designs from Patlabor, but this one really took the cake for its sheer ... incompetence. Procuring this toy after getting one of the CM's ingrams is like ordering dessert after the most succulent filet mignon you've ever tasted and getting a plate of artificial sweetener packets that the chef has taken the time to take a crap on before sending it out to you.

that you have to say the S word...

I laughed as hard if not HARDER at a time when of one your staff did the video review for Bandai's similar product of the 1/100 VF from Macross frontier.