People have often complained that many of the mobile suits in Gundam look the same. In 1999, series creator Yoshiyuki Tomino came back to helm Turn A Gundam, a radical departure from previous series both in tone and aesthetics. Everyone complained that it was too different. In no place is the reason for this more immediately apparent than in the design of the show’s various mobile suits and mobile armors. From the massive WaDom to the extremely lanky Flat, the designs created for the show have a certain roundness and asymmetry to their designs that clash with the traditional bulky rectangular limbs seen in most Gundam shows. 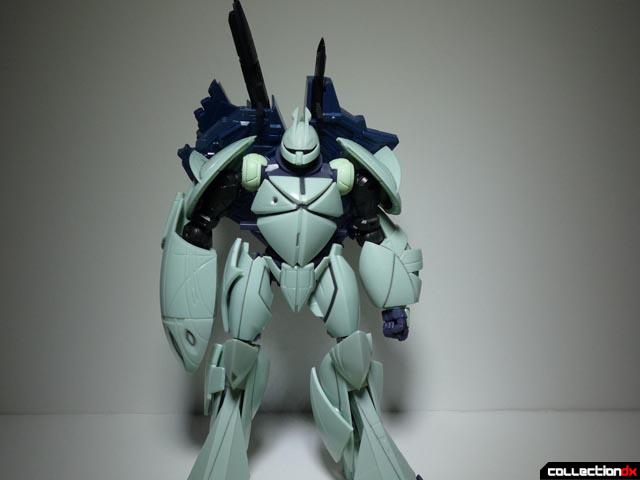 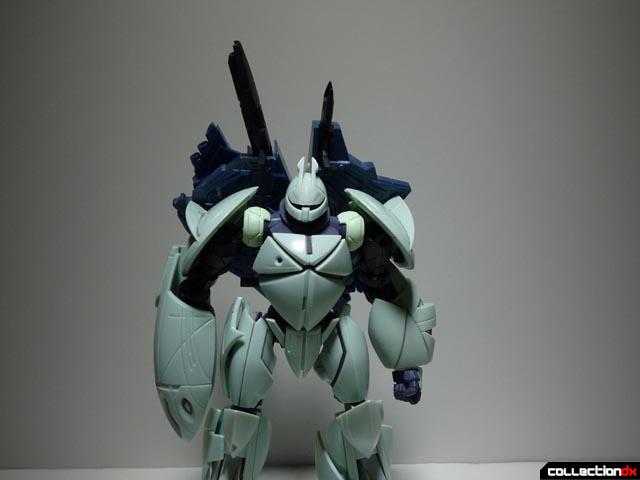 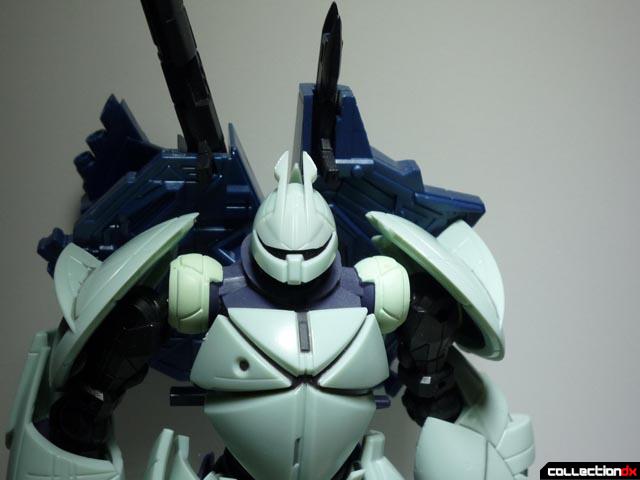 Like the titular Turn A, the Turn X was designed by beloved futurist Syd Mead, and prior to its Robot Damashii debut the only other “toy” merchandise of it was the non-scale model kit released to coincide with the show. I’m going to admit right now that I have a bias; I love the designs from Turn A Gundam and the Turn X is my favorite. It even has its own suitably ominous and haunting theme song for when it finally makes its debut (amusingly named “Black History”).

This is a review of the toy not the show, however, so let’s see if Bandai did the design justice.

The Turn X was a fairly early entry in the Robot Damashii line at number 11, so it doesn’t benefit from the experience the design teams have gained over time. One notable problem is that the bulky backpack and large shoulder pads hinder some of the arm articulation. I’ve actually had the ball joints pop out at the shoulder a few times, but they easily pop back in. Articulation on the right arm is also somewhat hindered by the Turn X’s giant crab claw/seed pod thing. The poor bastard will never be able to clap his hands. Fortunately you get three left hands to make up the difference; a closed fist, a gun holding hand, and an open hand for reaching, waving goodbye, or begging for change. 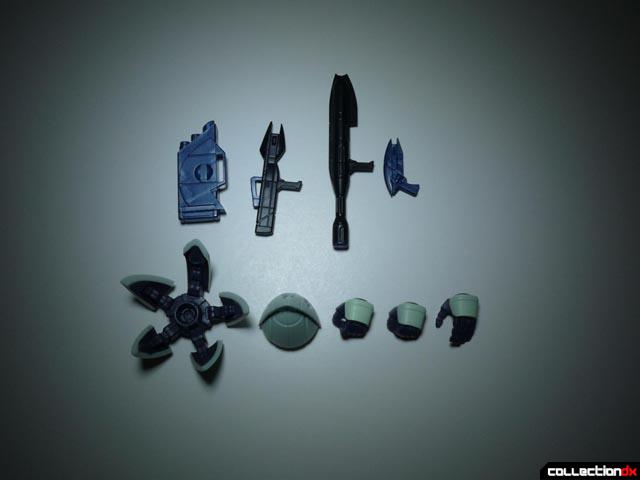 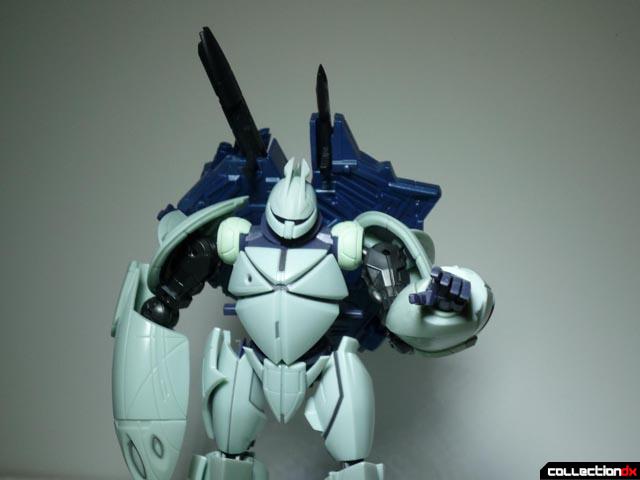 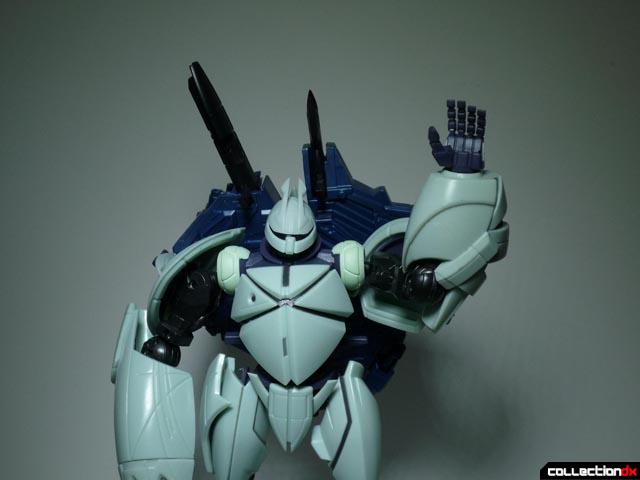 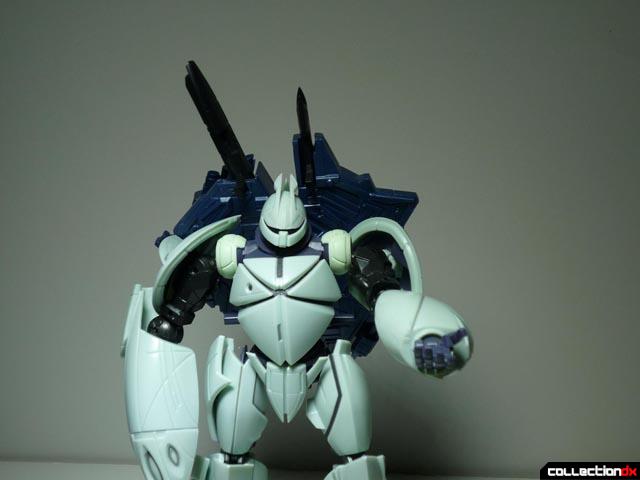 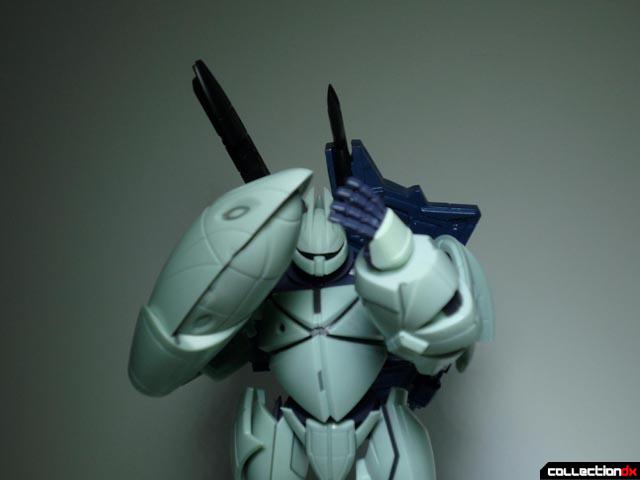 The tip of the right arm can actually be removed to reveal a ball joint underneath. You can then put on either the closed or opened version of the claw. In the show this can be used for a close range sparking attack, or a large beam saber can be generated out of the middle. The Turn X doesn’t actually carry any handheld melee weapons. 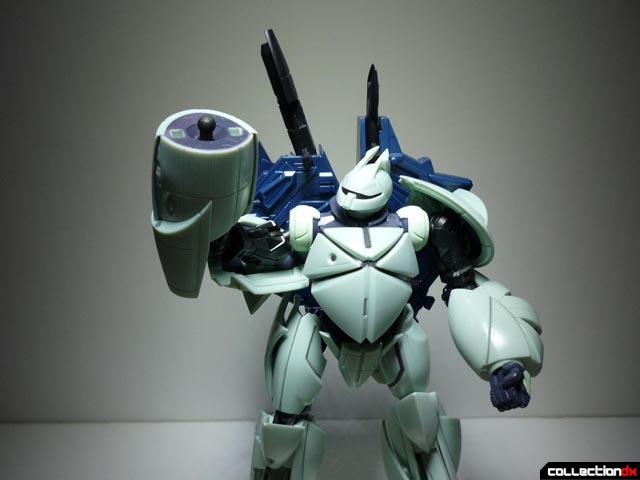 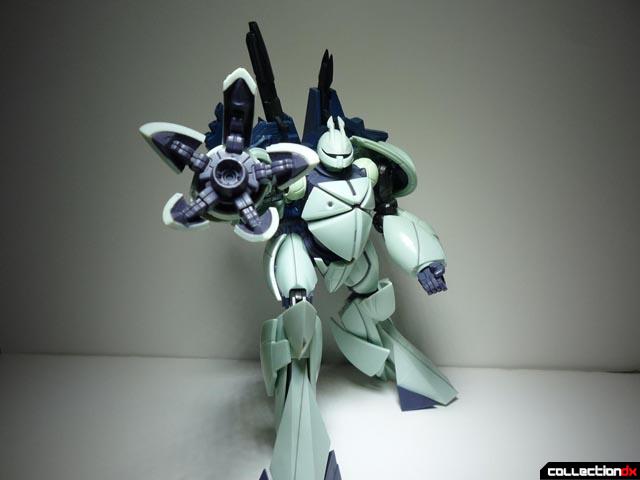 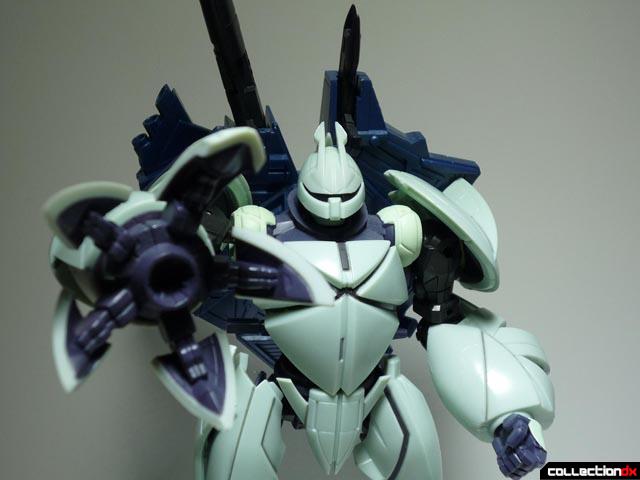 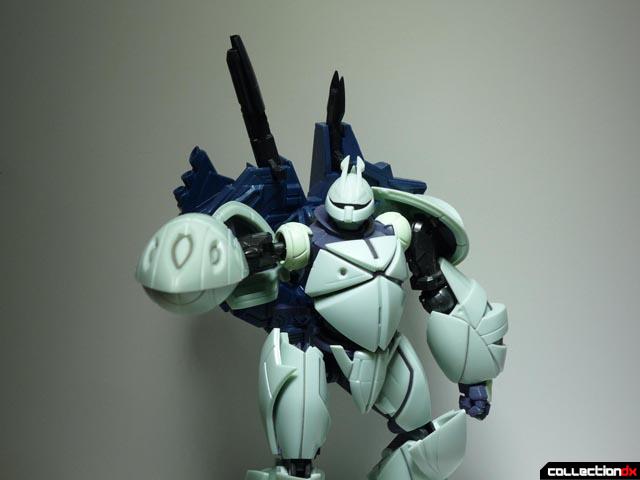 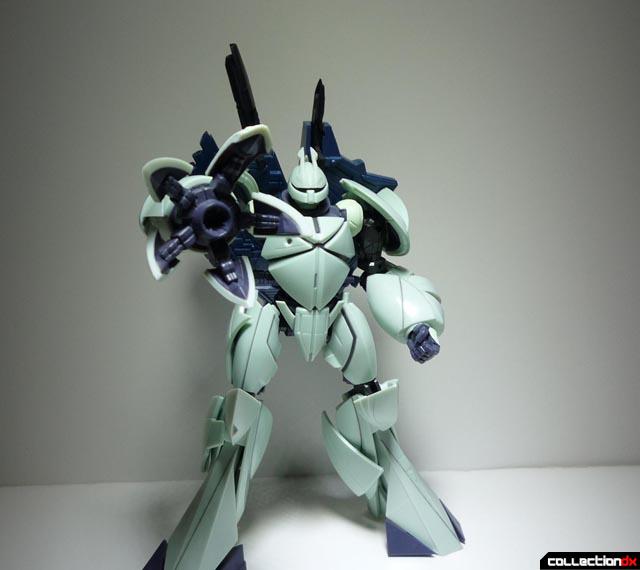 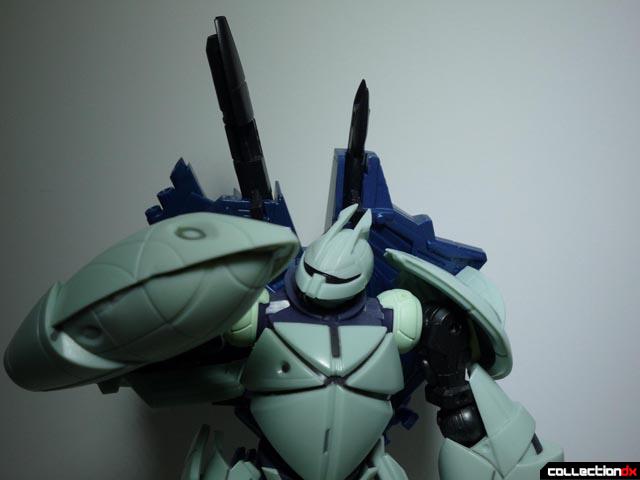 You do get a nice little armory, however, in that giant purple backpack. The backpack can’t be removed, but it can be swiveled up and down. There are places to holster a beam handgun, beam rifle, beam bazooka (noticing a pattern here?), and a handheld rocket launcher. The way the rocket launcher fits into the hand makes it look more like he packed a box of missiles for lunch. The rocket launcher has a rather thin handle and can only be held in the open hand; I cracked mine trying to get it into the gun hand. 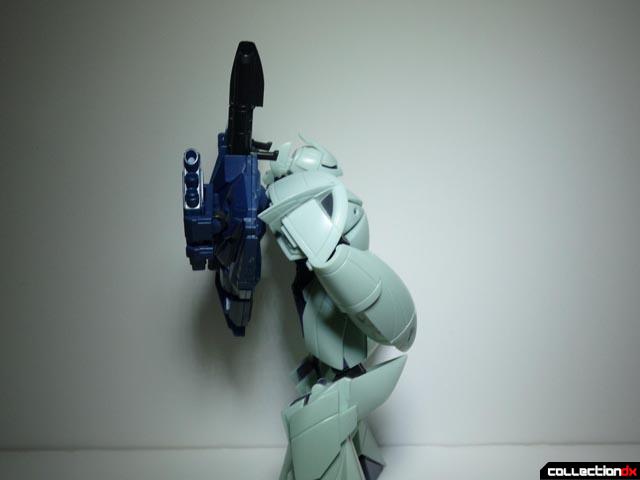 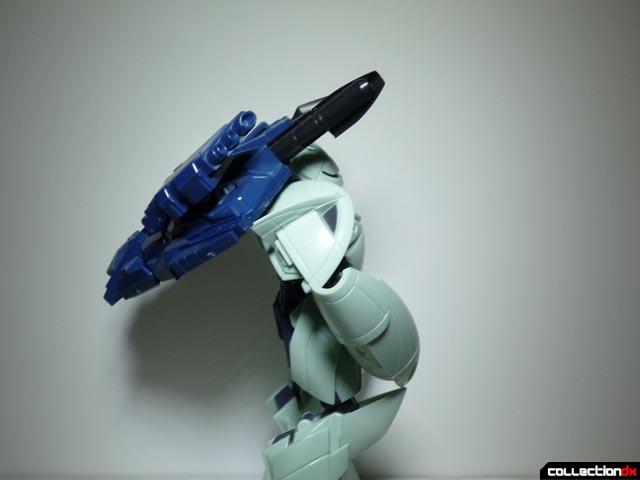 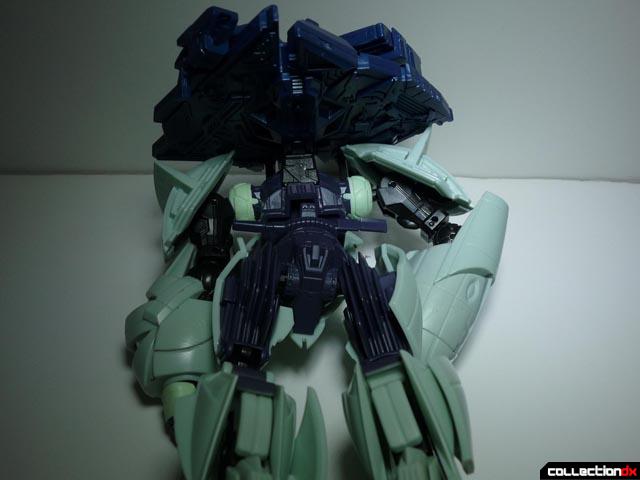 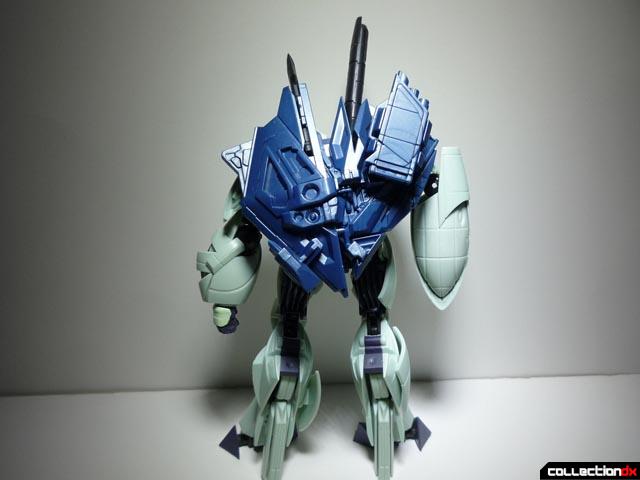 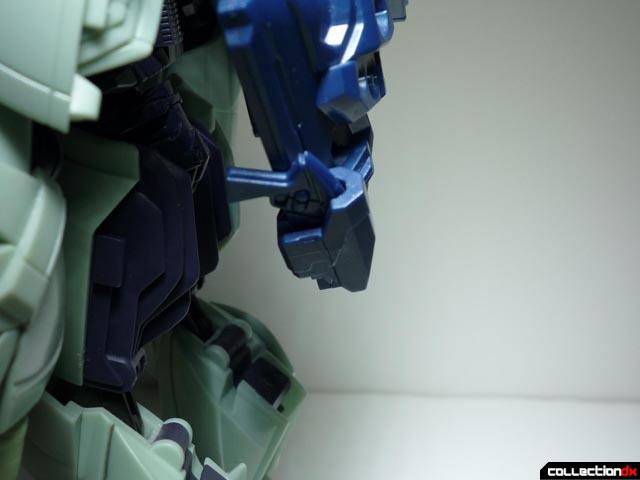 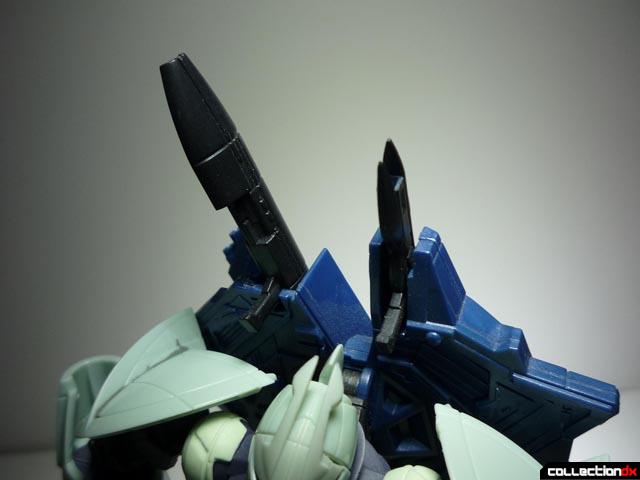 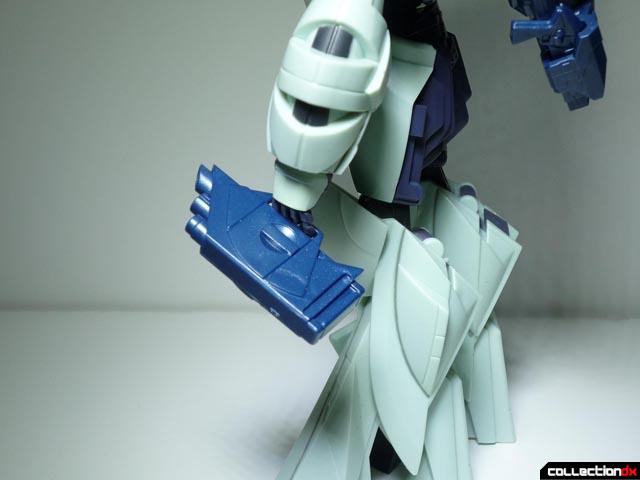 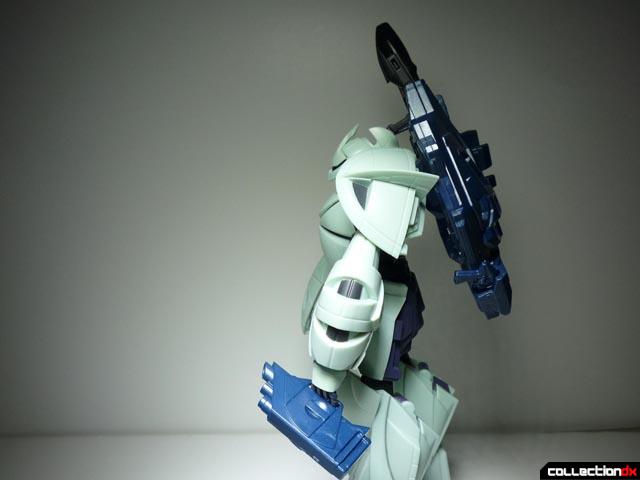 The handgun is kind of diminutive compared to everything else, but you could put it in a sideways gangsta grip and pose the Turn X in a Mexican standoff if you were so inclined. As for the beam rifle and bazooka, they fit the design, but there’s nothing particularly eye catching about them. You can have it stand there holding a comparatively small gun. Still, it’s neat to imagine the Turn X pulling out one weapon after another as it exhausts their ammunition. 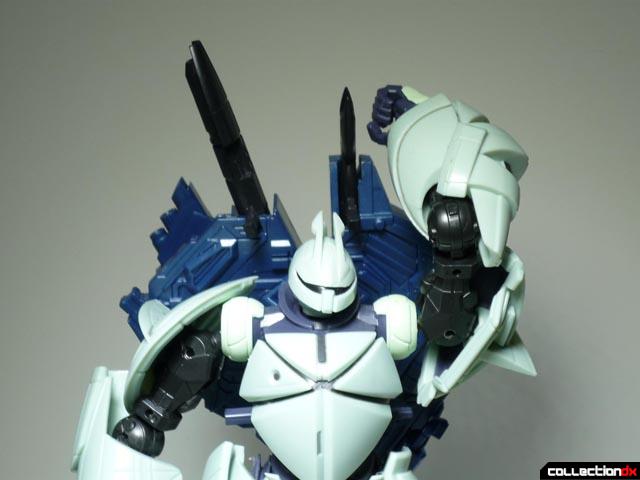 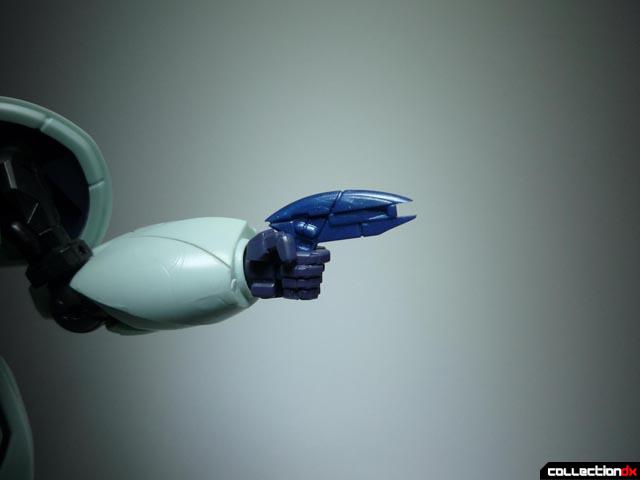 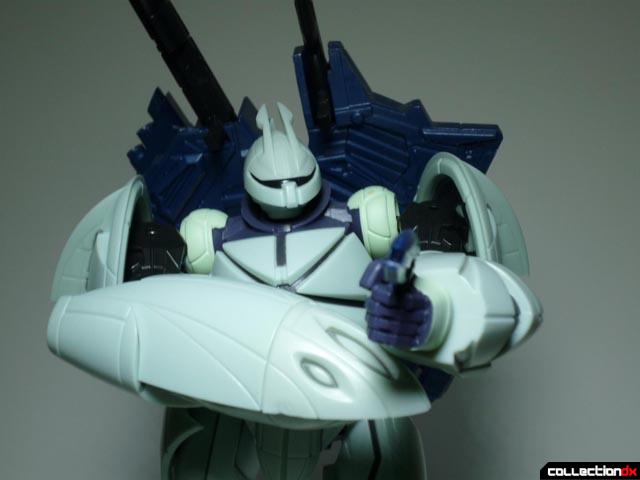 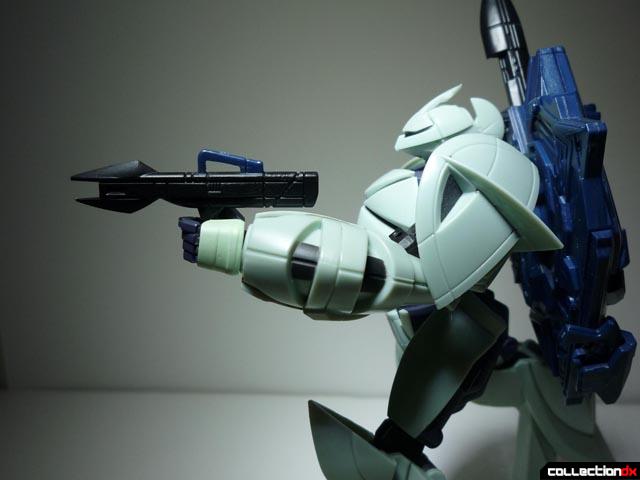 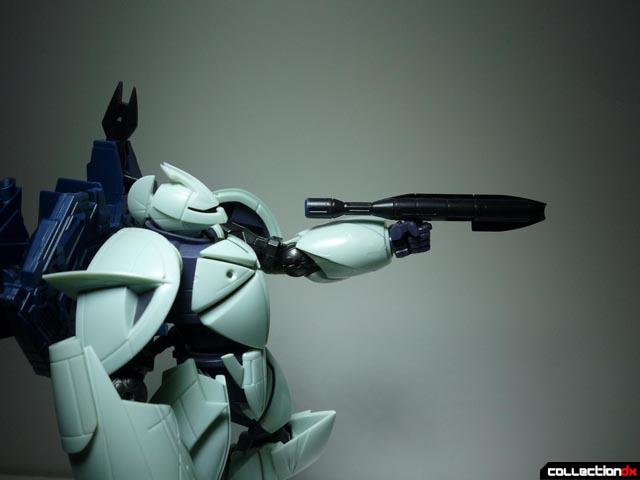 Another cool feature from the show was the unit’s ability to separate its head, torso, and limbs which could then fly around independently and fire lasers from all angles. That feature isn’t included, but you can’t blame Bandai for not adding the extra cost of a stand for each body part.

If you don’t like the mint chocolate chip ice cream color, the Turn X was also released in a limited “Moonlight Butterfly” version with translucent plastic with a bluish tint. It also comes with a stand and a set of butterfly wings with the coloration of the aurora borealis (it might sound silly but if you’ve seen the show you know that the moonlight butterfly is no joke).

Despite the shortcomings it’s still a solid release from Bandai. There’s just nothing else quite like it. I wish that Bandai/Sunrise would let more outsiders do designs for their shows, but due to Turn A’s “mixed success” that probably won’t happen anytime soon. I can give the toy a recommendation, but I would like to preface it by saying that I don’t think it’s worth the $40-50 a lot of people seem to be charging for it now unless you really like the design. Then again, the odds of getting another high quality Turn X toy anytime soon are kind of low so you might want to take what you can get. 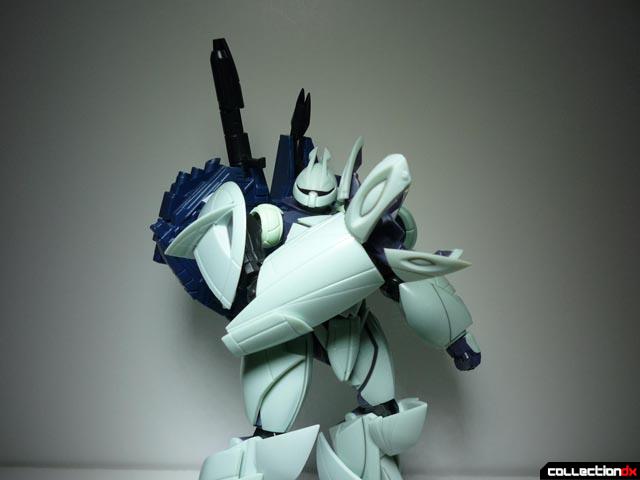 Thanks for the review! I bought the Turn-A, but I've never actually seen the show. Thought it would be cool to get the rival as well, and it honestly looks pretty damn cool!

Thanks, I'm still trying to improve the quality of my photos but I'm sure I'll get there eventually. The show is fairly interesting, I would say the premise is the best part but it can be incredibly slow even for a Gundam series. The Turn X is hands down my favorite enemy design though; I've had quite enough of the "bad guy Gundams" with unnecessary pointy bits and useless transformations.

Great review! I didn't like the Turn-X design a lot at first, though I loved Turn-A Gundam in general, but I had to get this to match beam sabres with the Turn-A and I'm glad I did - in the metal (well, plastic!), I found I actually really liked the design. It reminds me in some ways of the "Elite" designs from the Halo series.

One thing to watch for is that the pistol is incredibly small and does tend to fall out of its holster!

Alexx, Turn-A might not be for everyone but I personally feel its probably Tominos masterpiece - more so than even Gundam Zeta or the original series! It has its issues (Tomino does like to jump around and not explain much), but treated as a pulp-feel science fiction saga, I feel it actually stands up well to many classics of the genre - and I don't just mean in the anime medium, either! It certainly makes for a more interesting, less travelled Gundam road than the efficient but slightly soulless super-highways of recent Gundam series...

It's a pretty good figure, but I think the design is both its' biggest ally and weakness; the legs are often awkward to pose and frankly, Turn X didn't do much but float around and occasionally Shining Finger stuff so he kinda looks awkward with his weapons.

Couple of corrections - the backpack is removable (if an unnerving exercise) but it's show inaccurate to do so, and the Turn X does break down into almost all the pieces for what's apparently called the 'Bloody Siege' attack... which, uh, still looks like a load of plastic chunks flying around etc.

Spectacular show though; as long as you go in knowing that it's more a historical/steampunk-esque drama and not the traditional OHHHHH PRETTY EXPLOSIONS EARTH'S GRAVITY WEIGHS YOUR SOUL DOWN LOL!!!!! fare, then again Zeta's one of the worst anime I've watched so don't trust me.

Really, because most people I know (as well as myself)consider Zeta as the best gundam series made so far. You do realize the whole "gravity weighs down your soul" thing is just a metaphor?

Anyway, I should be talking about the toy, not a mostly unrelated series. While I love Turn X's design, the lack of the usual robot spirits fare articulation and effect parts for the shining finger makes me want to wait(hopefully not in vain) for an eventual Master Grade kit release.

I get it's a metaphor. It's just Tomino is so incredibly artless with it. People like Ikuhara, Masaki Yuaasa and Sho Aikawa can get away with it because they generally don't hammer it in for 50 episodes, and combine such ruminations on life with intriguing visuals; Zeta instead has two points - the totalitarian Titans are truly terrible and OUR SOUS CANNOT ESCAPE THIS SITUATION that it repeats ad infinitum, stated by contemptable characters who provoke cheering upon their deaths.

Galaxy Ranger- Try using multiple light sources for your pictures. It helps a ton in improving the picture quality by reducing those pesky shadows.
Great review by the way! Turn A gundam is one of my favorites. The designs were so funky , but they worked.
Btw, it looks like the Kapool from Turn A is going to be in the 4th Gundam Unicorn OVA.

The one that will appear in Unicorn 4th OVA is Capule, Neo-Zeon MS from from Gundam ZZ, not Kapool from Turn A. It's just like Zaku II and Borjanon relationship though, so they're actually not very different.

Ah, if only we could know the story behind that bizarre, arbitrary distinction. Capule is kind of a cooler name anyway.

I always figured it was just Sunrise doing their randomly pick English spellings out of a hat trick. With the Borjanon, there was an in-show reason for the name, and despite the slight mechanical differences to the original Zakus I and II, I always figured them to be one and the same. That said, what I didn't get was why the Zssa became the Zssan, but let's face it, Turn A is pretty open to interpretation.

Cool. I learned something new.

Nice review. Yeah the Turn X is really one of those figures you buy purely for the design rather than the accessories. Did anyone ever try cramming the beam part from the RD Transam Riser into the open claw to simulate the Turn X's beam saber?