Even with Cowboy Bebop being very popular internationally, it still is one of those Japanese anime's that you either love or hate. I am definitely from the love side of this equation.

I first was introduced to this show years ago on Cartoon Network's Adult Swim late night programming. The first episode I saw was one that put Spike against an obese, genetically altered hitman with a crazy smile. I forget the name of the episode, but it mesmerized me so much that I became an instant fan of the show.

I proceeded to buy all the Cowboy Bebop episodes and the movie. I watched them all over the course of a couple of days and I was very bummed when it was over. I felt like I had lost a dear friend.

To help me through my grieving process, I searched for any cool Cowboy Bebop related merchandise. Unfortunately, at the time, none was to be had except the odd figure (most of them being girly figures of the female character Faye, half nude). I was truly crestfallen.

With that being said you can imagine how excited I was to learn that Bandai was producing a Soul of Popynica version of Spike's famous Mono Racer, The Sword Fish II! I knew that when our samples from Bandai came in, I would make it my mission to be the one to review this ship and add it to my personal collection. Check out the video below to see the Sword Fish in action and you'll see why I love this ship!

So, today I am proud to bring you the latest Soul of Popynica release, the PX-05 Sword Fish II. Oh, in my excitement I almost forgot to thank Bandai and Toynami for sending CollectionDX today's sample.

On to the review!

The Sword Fish II arrives to you in the standard, aesthetically pleasing SOP box you see below. Inside the box is Sword Fish with all accessories, neatly placed in a vac-u-form plastic trays (not shown). 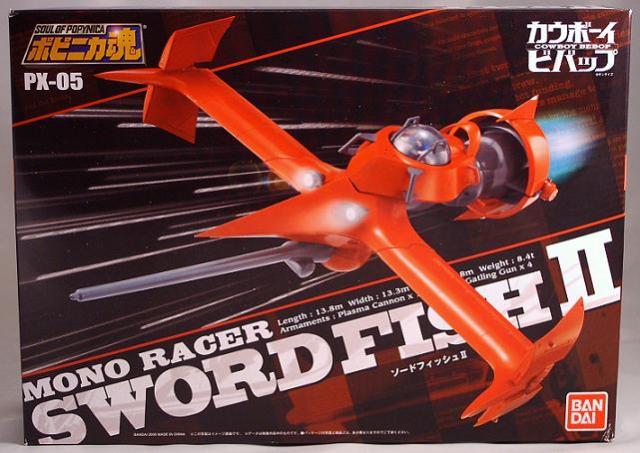 So, what's included in the box you ask? Just look at the photo below, it is taken directly from the instructions. Please note that you will see all the stuff that is in the photo listed below it.

The Sword Fish II is made from a nice mixture of quality plastics and die-cast metal. Its wingspan is 8 inches and the length is 9 inches from the tip of the plasma cannon to the tail. The die-cast metal content is not much as it only weighs in at about 6 ounces. I will point out the die-cast content as well as the features further along in the review.

Let's start off with our hero, Spike Spiegel in the cockpit pod. The pod is very small at just about 1-inch diameter. Being this small, you can just imagine how tiny the Spike figure inside is. I apologize for the pictures below, it was very hard for me to get a really clear picture because of the size and the way the sphere reflects light. I will say that you can see some detail on Spike, such as his blue suit with trademark, rolled up sleeves. You also can make out his yellow shirt under his suit and his spiky hair. However, you can't make out any facial detail. 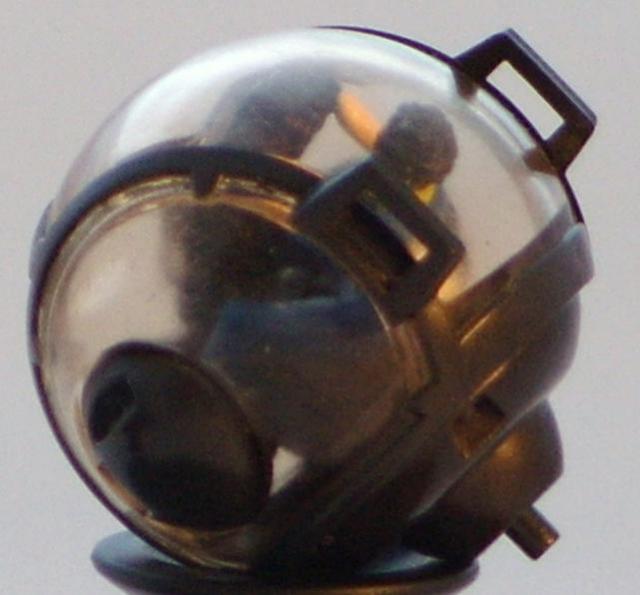 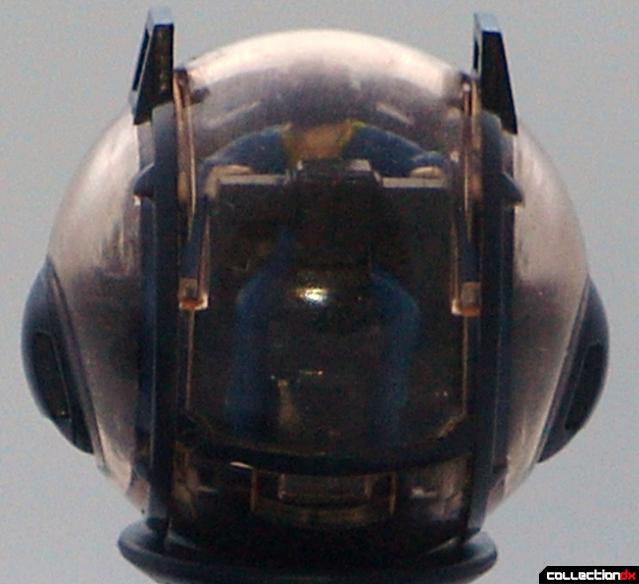 Now let's check out where you place this cockpit pod in the Sword Fish. You simply open up a hatch that allows you to place the pod in the ship. You will notice that the details are not left out. Just check out the light brown leather looking material on the inside of the cockpit hatch. Note* be careful with opening the cockpit, The hinge feels rather flimsy and may break if too much force is used.

Now that we have Spike positioned in his pod aboard the Sword Fish, you will notice the fit is really nice and still allows the pod to be pivoted from side to side. 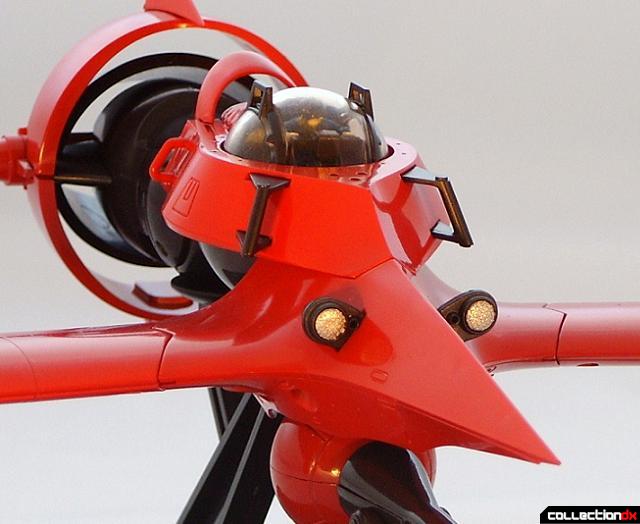 When the Sword Fish isn't airborne, it can be displayed on any hard surface using its landing gear. The front landing gear conveniently fold into the wings, just like a WWII fighter plane. Unfortunately, the rear is only removable. Once removed you are able to affix a cover over the exposed area that the rear landing gear once resided. Note* the rear thruster pivots up and the rudder at the bottom of it is fold-able to allow clearance for the landing gear.

As you can see in the next two photos below, storage of the Sword Fish is a snap. Simply pull the wings out from the fuselage and fold up. Just like in the anime!

Looking at the underside of the Sword Fish, I wanted to point out what is metal. The bottom of the cockpit area is die-cast as well as the sphere and barrel of the Plasma Cannon.

Speaking of the Plasma Cannon...You are able to pull the Plasma cannon down away from the fuselage allowing 360 degrees of movement. the barrel is also able to pull forward from the sphere (not shown)

Get ready for take off! With the provided stand you can display the Sword Fish in flight. Isn't it a thing of beauty? Truly an exact replica of its anime counterpart. 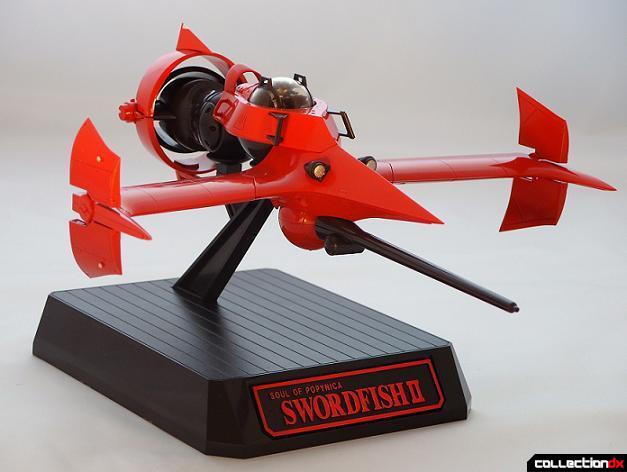 The Swords Fish isn't without a couple more gimmicks to show. Check out the moveable fins at the tips of the wings. These fins are completely adjustable. However, I must caution you, the point of rotation is plastic and feels fragile, so be careful!

Lastly, we have the air brake feature. The air brake basically folds over the engine nozzle. Thus, redirecting the flow of the engine's nozzle forward, creating a braking effect. Very cool and accurate to the anime.

In conclusion, I really like the Sword Fish II because of its anime accuracy and the fact that I love the show. These facts allow me to overlook the few flaws it has. I feel it is a great display piece a nice addition to my collection. If you are a fan of Cowboy Bebop, you will love the PX-05 Sword Fish.

10 comments posted
I always liked the

I always liked the aesthetics of this fighter and I see Bandai put some real effort into this set. Great review!

The episode you remember is probably Pierrot le Fou. It's a good 'un. Good review, too, but it's a bit too simple for my taste. Too few accesories to misplace.

Great review, Its always nice to see Cowboy BeBop toys as there are so few but I wish it had some more metal content.

I have the Bandai Swordfish model kit for CDX review on the back burner right now which is a great little kit, nice to see the differences between the two. Cowboy Bebop was the series that got me to believe in anime again and eventually got me to start writing reviews for CDX. I owe a lot to that series!

Looks great but I dont get why they made it red when it's clearly salmon pink in the show.

That was probably the best episode in the series, my favourite was the episode where they pull the NASA space shuttle out of retirment & modify it for a runway take-off. Cool toy, but I must admit the shows vehicle designs don't really lend themselves to being made into three dimensional toys, great review!

With this and the SoC Big O, we're this much closer to getting newer versions of every toy from Bandai USA's Anime Collector line from years back.

It's just too bad we'll never, ever see another piece of merchandise based on Outlaw Star: I never did buy the ship from that line.

I dunno, we might get the Outlaw Star. After all, it was popular enough for a thirteen episode spinoff sequel/prequel/AU thing, wasn't it?

I did not know that they made a sequel. After looking around one was made called angel links. Set in the same universe but doesn't feature the crew of the outlaw star. A actual sequel was scrapped for some reason.

Anyway after seeing more pictures of The Swordfish II it looks more desirable.

I've been a fan of Cowboy Bebop since I first saw it on a cable channel (that channel was called Locomotion back then, is Animax now). I thought it was the best anime ever (and still hold the same opinion, just check my nickname ^ ^). The characters are great and the story is interesting, entertaining and quite hilarious in several episodes, also the design of the mono spacecraft, specially Spike's Awesome Swordfish. From that moment I tried to find something to collect of the show but, beside some resin statues of Faye and a long "out of stock" swordfish model from Bandai, there were no more things to choose from.

Until Bandai announced it's Soul of Popynica Swordfish. I knew I had to get it and I'm glad I did, is an excellent representation of Spike's ride and has all the details and moving parts to show it just like you see in the anime, it looks fast and ready to take off at any second. It's a must have for any Cowboy Bebop fan or anyone who likes it's design