Go Nagai's Super Robot anime Mazinger Z was extremely popular with children in South Korea during the 70's. So, with this in mind, Kim Cheong-Ki, a Korean director, wanted to create a Korean hero for Korean children. In order to emphasize that this new Super Robot is Korean, it is able perform the traditional martial art, taekwondo... hence it's name, Robot Taekwon V! From Wikipedia

Robot Taekwon V is a South Korean animated film directed by Kim Cheong-Ki and produced by Yu Hyun-mok, the prominent director of such films as Obaltan (Aimless Bullet) (1960). It was released on July 24, 1976 , immediately becoming a mega-smashed hit in the late 1970s, and consequently inspired a string of sequels in followng years. Robot Taekwon V was released in the United States in a dubbed format under the name Voltar the Invincible. Robot Taekwon V became the first Korean film to receive full digital restoration treatment in 2005. In Japan, it is known as a plagiarism of Mazinger Z.

On to the toy! Taekwon V comes in a very unassuming black corrugated cardboard box measuring 2.5" deep x 9" wide x 11" long. The packaging is very plain as you can see in the pictures below. The box only has few markings in silver and red type, letting you know what awaits you inside. The thing that I would like to emphasize about this rather boring box is its weight. The box weighs in at a hefty 2.5 pounds. You know what that means, die-cast! glorious die-cast metal goodness! 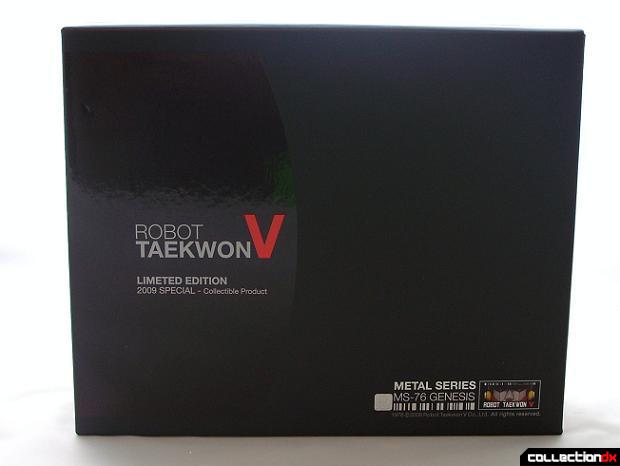 Upon opening the box you are greeted with Taekwon V encased in his very own Soul of Chogokin style Styrofoam sarcophagus. Also included in the box is 2 plastic trays of accessories and the instruction booklet. Now if I only could read Korean... 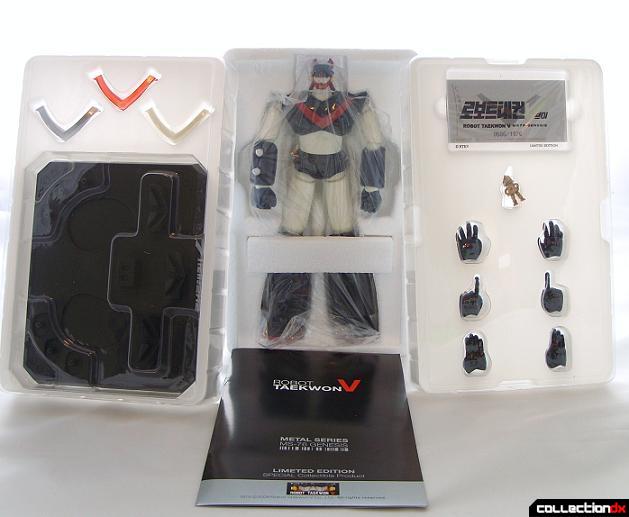 The accessories included are:

Towering over the SOC GX-01R Mazinger Z, Taekwon V stands 8.5" tall and weighs 1 lbs, 7 ozs. due to its mostly die-cast construction augmented with PVC and ABS. Since the Japanese feel Taekwon V is a plagiarism of Mazinger Z, I figured I would give you a few pictures of Taekwon V with Mazinger Z. Note that he can do Mazinger Z's famous, arms up, fists clenched pose really well. 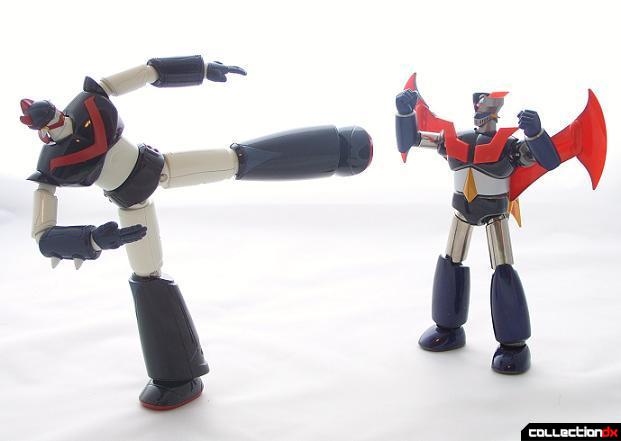 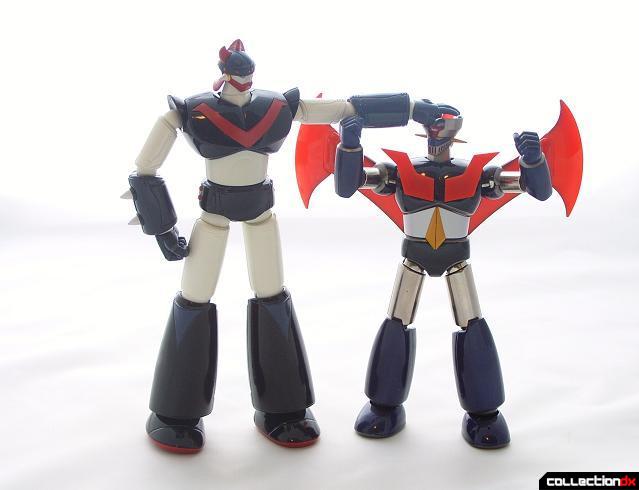 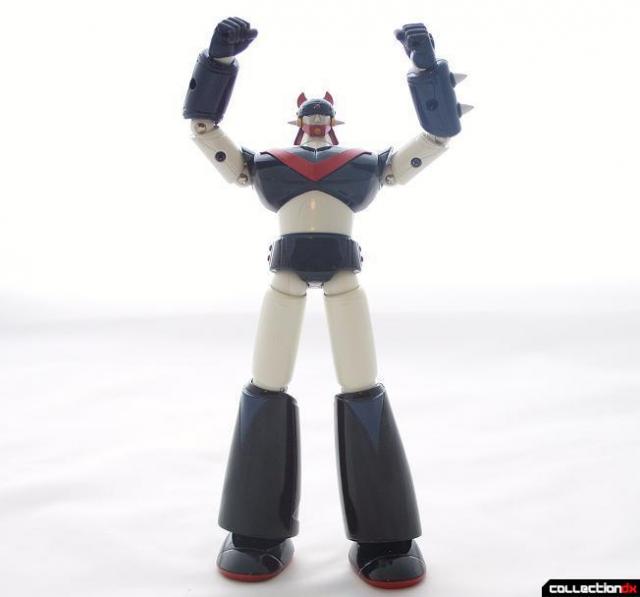 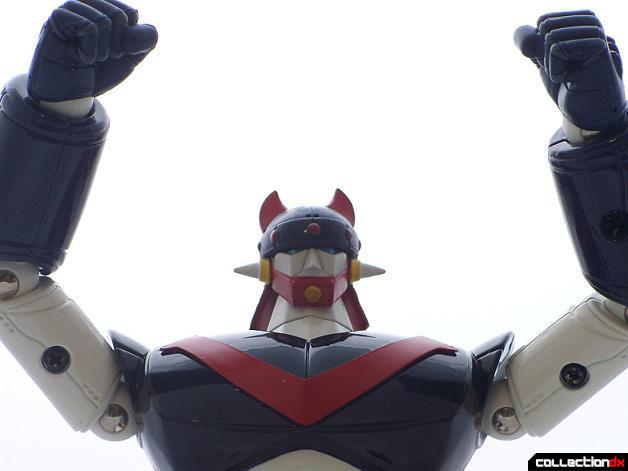 Well, like the picture below suggests, I too am now bored with comparing Taekwon V with Mazinger Z. I totally think Taekwon V would kick Mazinga Z's butt...LOL! 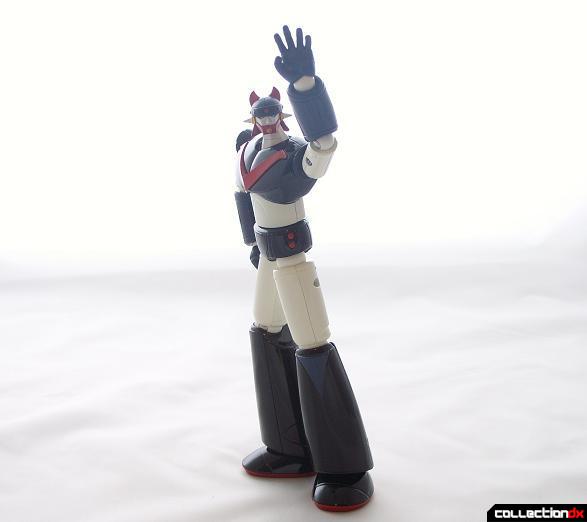 Moving along, Taekwon V has all the nice tight and ratchety joints that we now expect from any high-end chogokin, allowing him to be posed in many ways. He also has a waist joint! All I could think of when looking at the picture below is that song by Right Said Fred, "I'm a model you know what I mean and I do my little dance on the catwalk!" 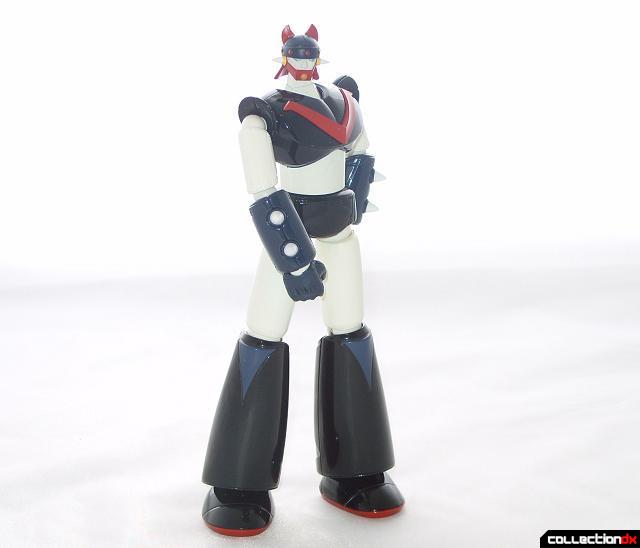 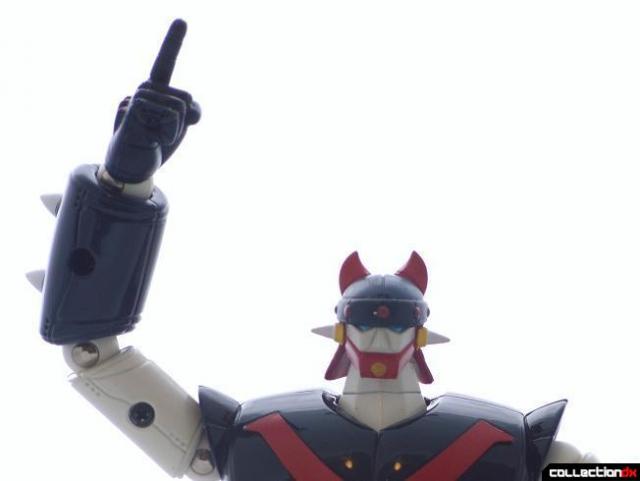 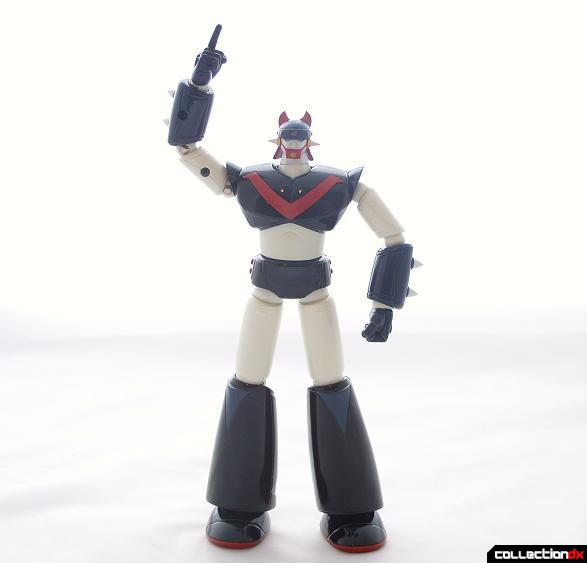 Here is the only flaw that I could find with the figure, that is if you even consider this a flaw. Damn ugly exposed screw holes! I hate them! I guess I can let this go because the figure is so great in many other ways. And let's face it, the figure looks great when viewed from every angle except its backside. 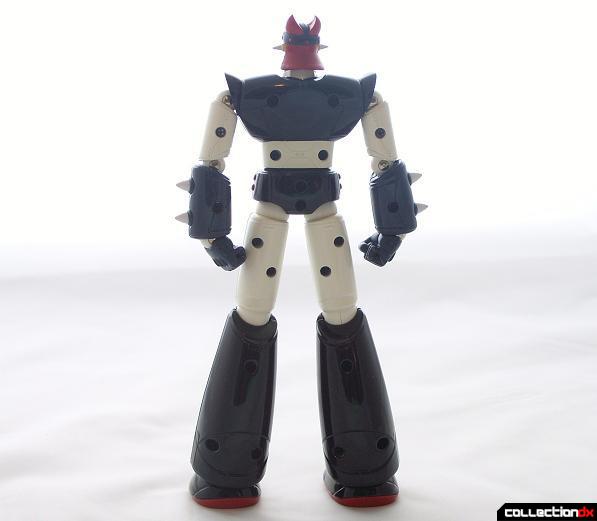 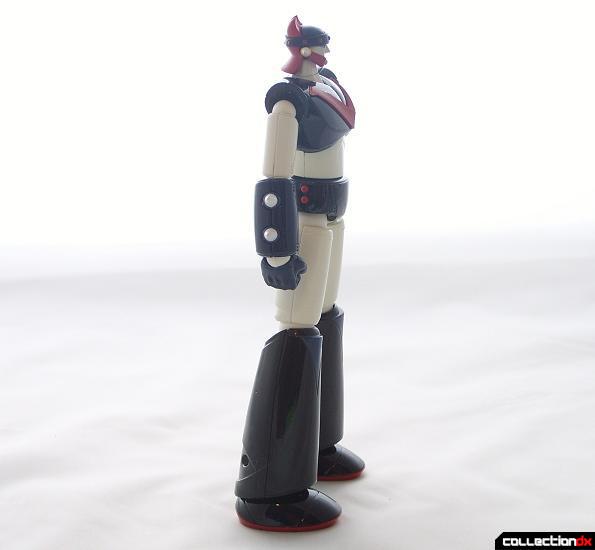 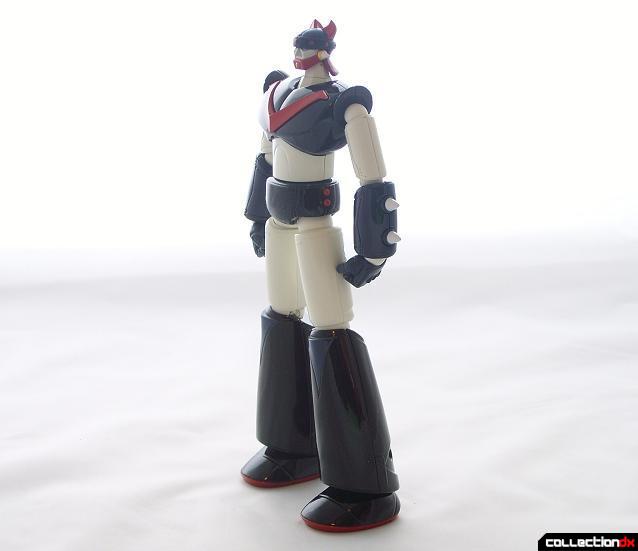 Here is Taekwon V atop his base with all the included accessories mentioned above. As you can see he displays really well and will fit right in with other SOC's you may have in your collection. 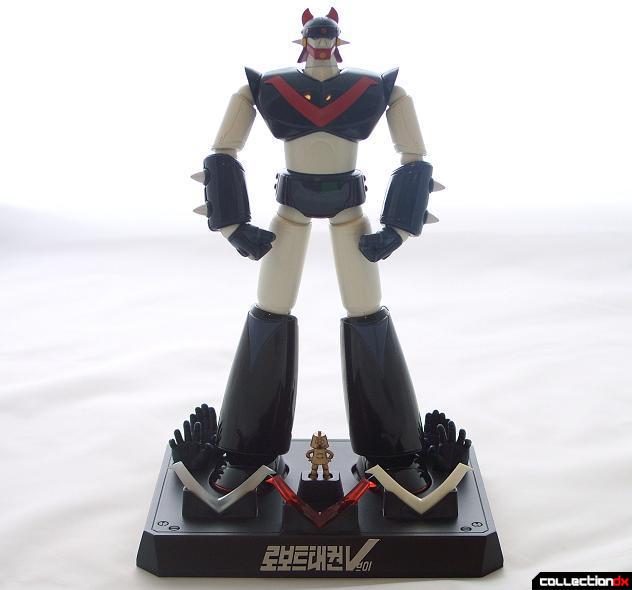 I wanted to give you a nice close-up shot of the little die-cast metal Tin-Can Robot Cheol mini figure. From what I gather this is supposed to be Taekwon V's pilot's little brother wearing a home-made robot suit with a tea kettle head. Tin-Can Robot Cheol is the comic relief element in the TV series. 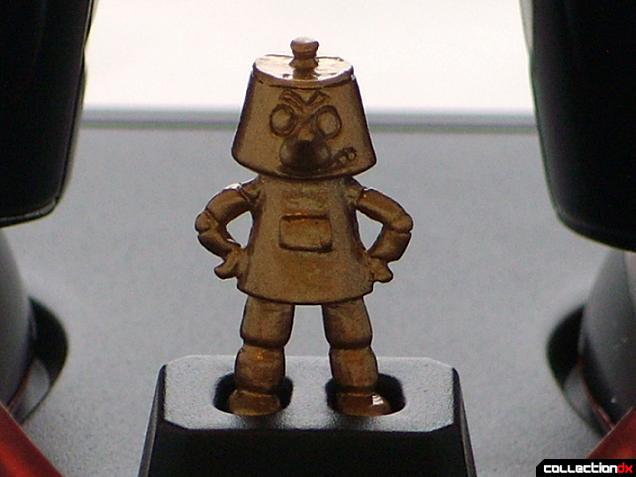 Lastly, Taekwon V is proudly displaying his autographed certificate of authenticity. You will notice that my figure is number 586 of 1976 produced to commemorate the year that Taekwon V was first released in Korea. 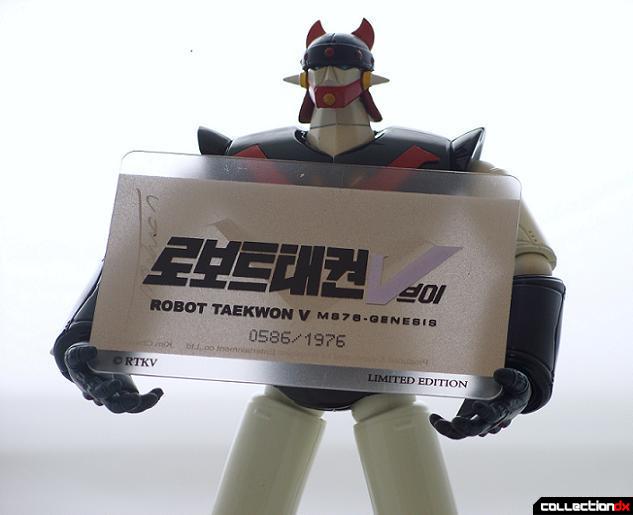 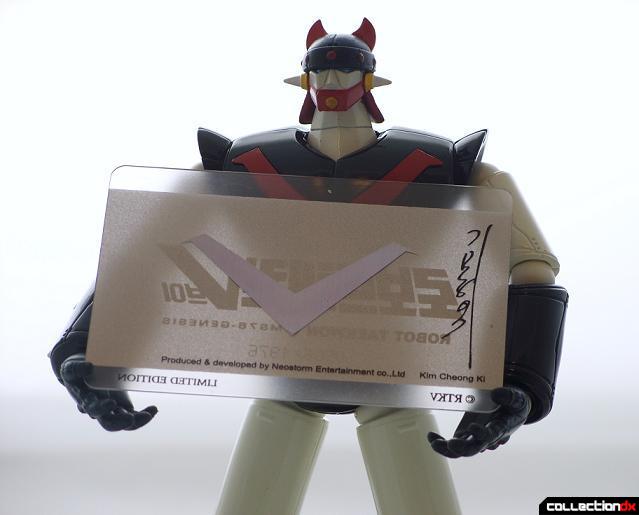 In closing, I would like to say that if you like modern chogokin this is a must-have. Even more so if you are into the more obscure characters. With only the very limited number of 1976 being produced, the original MSRP of $110 is quite a bargain. The figure is sure to go up in value. Heck, last time I looked, it was going for around $160 on eBay. Grab it before you have to pay with your first born son! You can click on the eBay links we provided below.

16 comments posted
Its about time!

Its about time somebody reviewed this generally unknown Chogokin! This is an awesome figure and all die cast to boot, why they didn't produce a regular version I don't understand as 1976 is such a small number. I'll just wait for the korean bootleg version! LOL

I'm actually pretty damn surprised this exists, but dear lord is it glorious. If anything, from the films, Taekwon V is far more of a ripoff of Uchuu Senkan Yamato, IMO.

His cat ears are kinda funny, though.
---
Humanity calls out to me, Kamen Rider Stronger, etc.

To be honest, I never knew this mean (Korean)bastard existed. The diecast model is exquisite. I also liked the YouTube clips. The animation reminds me more of Astroganger but the 'V' on his chest is clearly a plagiarism of Great Mazinger. All in all the robot is too cool to be true. Personally, I don't consider the screw holes as a flaw. Great review. Thanks for sharing.

I also have a soft spot for Taekwon V and if I were still buying gokin, I would have been all over this piece. I have to think that there is a vintage Korean jumbo out there somewhere, outside of the King Of The King, but as yet, I've never seen nor heard of one. :( Will have to settle for finding that 22" modern vinyl one of these days.

"why they didn't produce a regular version I don't understand"

They did make a plastic version, actually, which is just a little smaller but has slightly better articulation and slightly different coloration.

Thanks for the link!

At best, Taekwon V is simply inspired by the Dynamic Pro robots (Mazinger, Getter, etc) that dominated the 70's mecha scene. The unfortunate problem is that it spawned numerous animated features that do ripoff Japanese anime directly. Poor Taekwon V had his head ripped off an placed on everything from Xabungle to God Sigma.

I demand to see this toy with Taekwon V's head on Xabungle.

Though the series is pretty bad, even compared to others of it's day, this robot is awesome. I like that he's taller than the Mazinger SOC, since Taekwon is a 'bigger and better'Korean semi-ripoff version of Mazinger anyway. Love the review of this mostly-unknown robot.

Love the juxtaposition of a totally ripped-off design (let's face it, that is Mazinger with a few very minor tweaks) being given such a high-end SOC-like presentation! It's rare that a funky bootleg style design gets such nice treatment. I'd be all over this, too, if I was still buying a lot of diecast.

My only problem with it, and it does bug me, is that he looks like he's wearing a ball gag. No joke. I can't escape that imagery. Maybe that is based on a cultural mask or something, but it just doesn't work for me. :-(

Who knew South Korea could put out such quality(Best ripoff ever) damn near on par with SOC.....drooling.

I'm Jealous of Dan getting this... Although I think my ultimate holy grail may now be a bootleg NORTH KOREAN toy.

Well I'm Jealous that your going to Morphy's, So Ha! LOL

Its like Mazinger and Frankenstein Junior had a baby...

Are those hands mostly copied from the SOC Mazinger as well?