In 2015, Earth is under attack from mysterious, powerful beings called Angels. Their origins and goals are unknown, but the focus of their attacks are on the post-apocalyptic, high-tech metropolis of Tokyo-3- a city designed to be a hidden fortress for the secret headquarters of the United Nations special organization NERV. What makes the Angels such an imposing threat is their ability to project and manipulate AT Fields- natural, invisible, omni-directional defensive shields which cannot be penetrated by any physical attack or weapon, including the most powerful N2 bomb. Learning of the Angels’ existence years earlier, NERV constructed a small group of advanced biomechanical robots called Evangelions to fight the Angels. However, only 14 year old children are capable of merging their minds on a near-spiritual level with the 700’-tall armored humanoids. Shinji Ikari is only one of a select handful who has been able to accomplish this. ...But he does not care. He has been push aside and ignored ever since his father abandoned him when he was four years old. And he does not care if he dies or lives, or if humanity dies or lives. Together with two female pilots in their own EVA Units- the confident, confusing redhead Asuka Langley Shikinami; and the curiously silent, red-eyed, blue-haired Rei Ayanami- the abandoned son of NERV’s Supreme-Commander must face his inner demons and find the courage to go on protecting humanity while fighting to preserve what little is left of his own!

A full twelve years after its debut in 1995, the anime series “Neon Genesis Evangelion” has remained a staple in Japan as one of the most dramatic and controversial; its fan-base ever vigilant for debate, answers, and new material. 26 episodes for the original series ended with pains after behind-the-scenes difficulties forced it in a different-than-planned direction, and so two films- “Evangelion: Death and Rebirth” and “The End of Evangelion” (both 1997)- sought to fix the deflated final episodes, but succeeded only in adding fuel to the fire. And so, in 2006, Studio Khara- founded by Evangelion’s creator, Hideaki Anno- took on the challenge of refreshing the work that had been started by Studio Gainax over a decade earlier, and bringing it to full blossom on the big screen. No longer restricted by a limited TV budget, the four films collectively known as “Rebuild of Evangelion” cover the length of the entire series- inviting new viewers, pleasing previous fans, and expanding & trimming all 26 episodes into four bite-sized chunks. Additionally, acting as a type of reboot for the franchise, “Rebuild of Evangelion” seeks to rewrite the ending of the original series and further expand what was not possible before- including new special effects-sequences, more-detailed scenes, and generally grow from both the mistakes of its namesake & long-standing fan input.

14-year old First Children Rei Ayanami is the designated pilot of the yellow-and-white prototype model Evangelion Unit-00, and one of the main characters in the series. Oddly, little is known about her or her background, other than her peculiarly pale white skin, naturally-red irises, and short powder-blue hair. Many in her school consider her odd as it is- unconcerned, disconnected, philosophical, and usually has little to say about anything, or show any signs of enthusiasm. Equally so, Shinji and Asuka find it hard to work with her for similar reasons despite being her teammates in trying to protect the world from the Angels! Perhaps the only person that Rei will open up to and interact with like any other human girl is Shinji’s estranged father, Supreme-Commander Ikari. But maybe her silence and lack of connection with the outside world are due to her near-death experience when attempting to Activate Unit-00 several weeks earlier, as the giant armored humanoid went out-of-control & trashed the testing facility. However, being connected to the Evangelion Project for far longer than the other two Children, Rei has always seemed to have both this quiet temperament and undefined relationship to Commander Ikari.

As the first film, “Evangelion 1.0- You Are (Not) Alone”, approaches its finale, Rei- and Unit-01’s pilot, Third Children Shinji Ikari- are waiting for the time to begin Operation: YASHIMA in order to destroy the 6th Angel Ramiel. In a short lull before boarding their Entry Plugs, they have a quiet moment amidst the storm of activity behind them. Having been seriously injured by the same Angel the day before, Shinji’s confidence is low, he fears that he may not have the courage to go on, and his [second] failure to destroy the Angel will be the doom of humanity. Rei, continuing to keep neutral and her feelings to herself, simply states that what happens cannot be changed, and it could go either way. While this scene is almost-identical to how it appears in Episode 6- “Rei II”, much of the dialogue and camera angles are different. It is from this moment that the EX Figure is based. 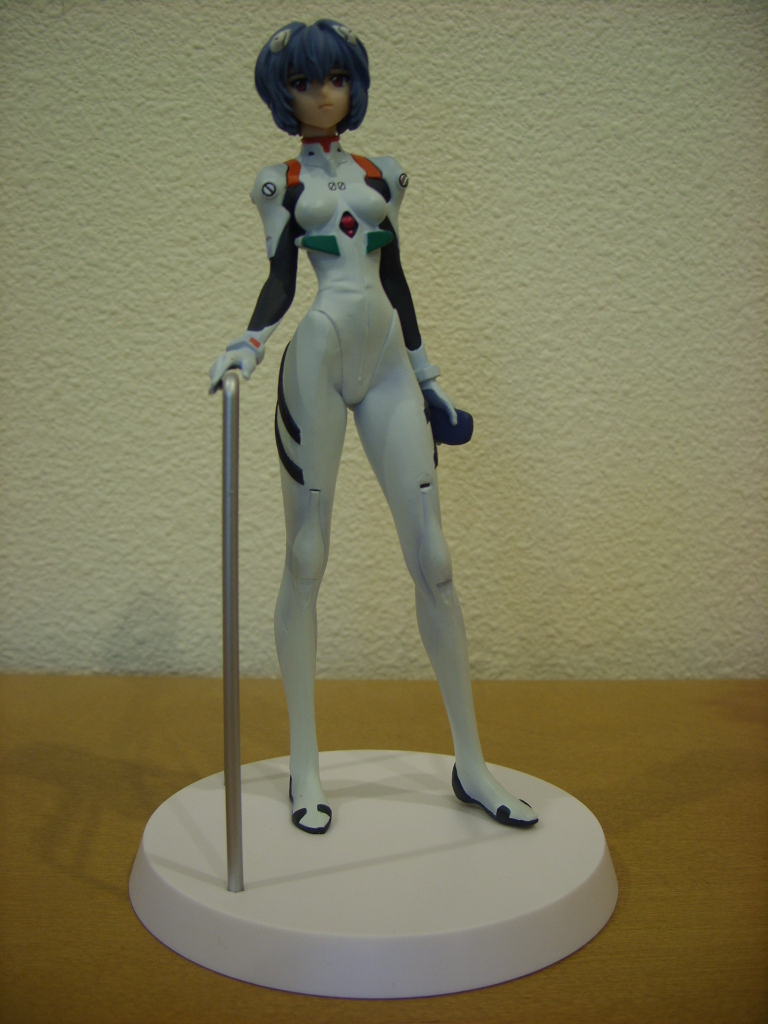 This figure of Rei Ayanami is fixed-pose, and she stands comfortably on a simple white round base, with her hand resting lightly on a handrail. While the base, handrail, and most of her body is ABS, her hair and both arms are PVC. But the difference in materials is only noticeable at close-range and with careful examination; the entire figure is painted and so none of the original plastic coloring seems to be exposed. Her body retains the same design-style used for all female characters in the series- long legs, pointed nose, and a prominently-busty chest [for a fourteen-year old].

Rei is dressed in her standard white & black skin-tight Plug Suit, with her designated EVA Unit’s numbering (00) on both her chest and small backpack. Only her head is uncovered. Common details include the small white integrated backpack, multiple life-support monitors along the front of the torso (both below and between her breasts), and the suit’s vacuum On/Off switches on both wrists.

She is also wearing the A10 nerve receptor headset that is standard required equipment, which ties the Children mentally to their massive humanoid constructs. But the headset only appears as two small white bumps in her hair. Rei’s short blue hair is painted PVC, with her stamped red eyes easily seeing through the two parts in her bangs. 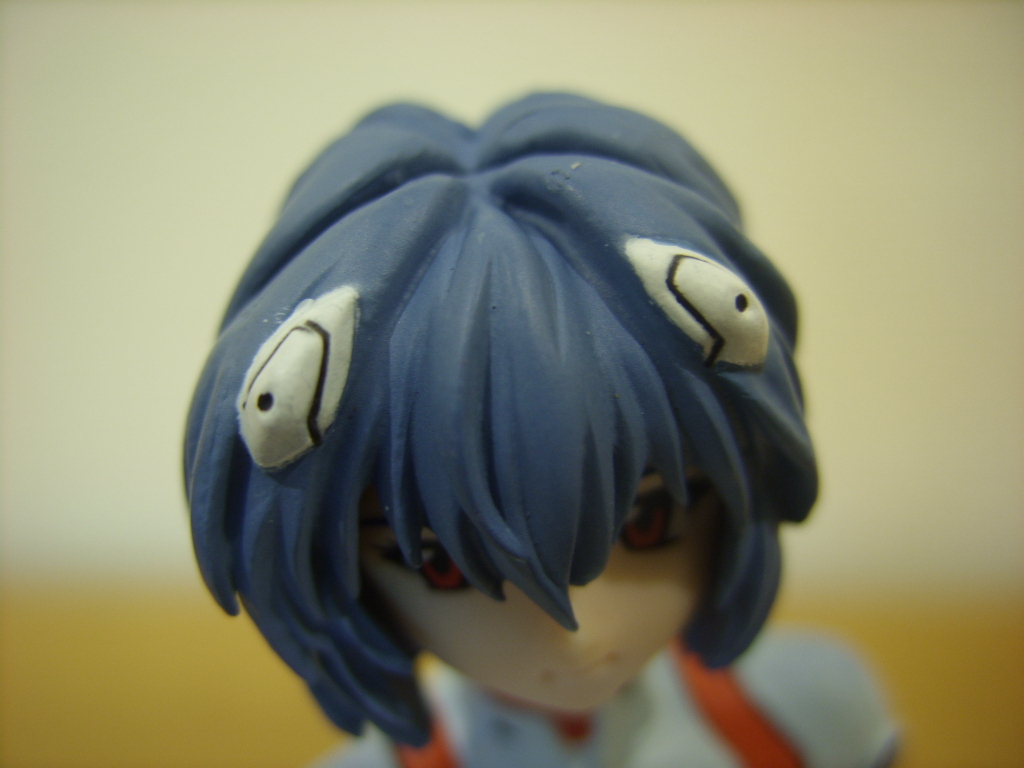 Since Rei is standing on an elevated platform in the scene, an ABS handrail is fixed to the base, and she has her right hand resting on it. In her left hand, however, is a non-removable accessory that doesn’t make much sense for the scene. For the character, Rei keeps Commander Ikari’s broken glasses since he rescued her from her Entry Plug the day that Unit-00 went out-of-control. While she keeps them at home, on this particular figure she is holding them in a dark blue container in her left hand. 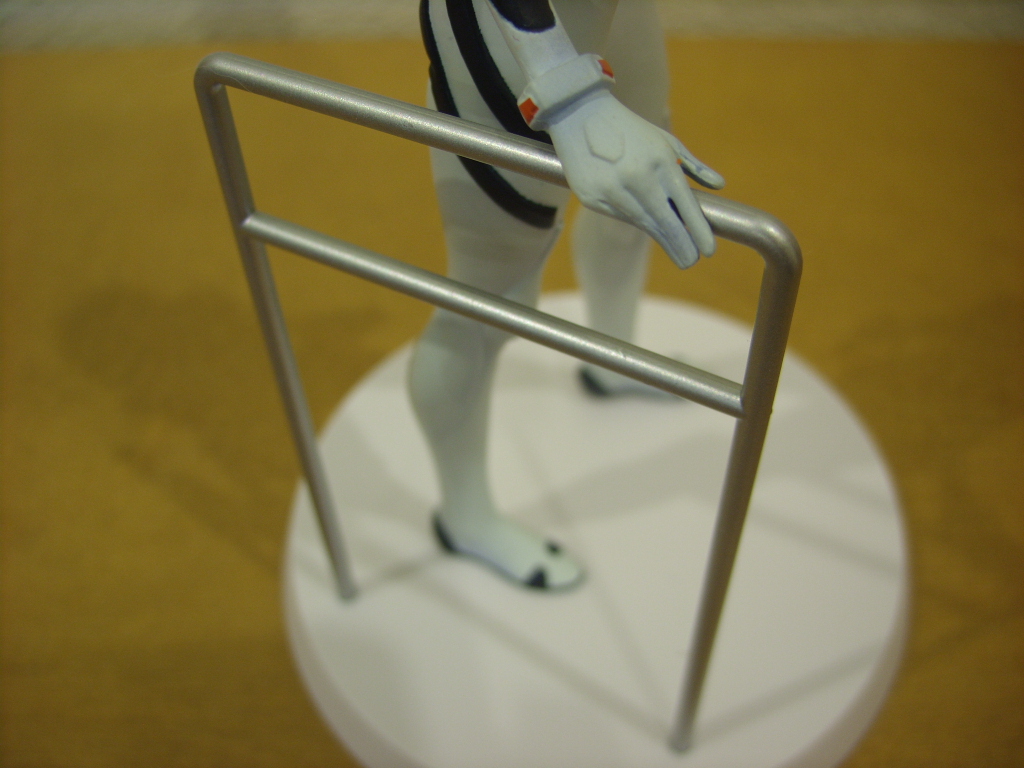 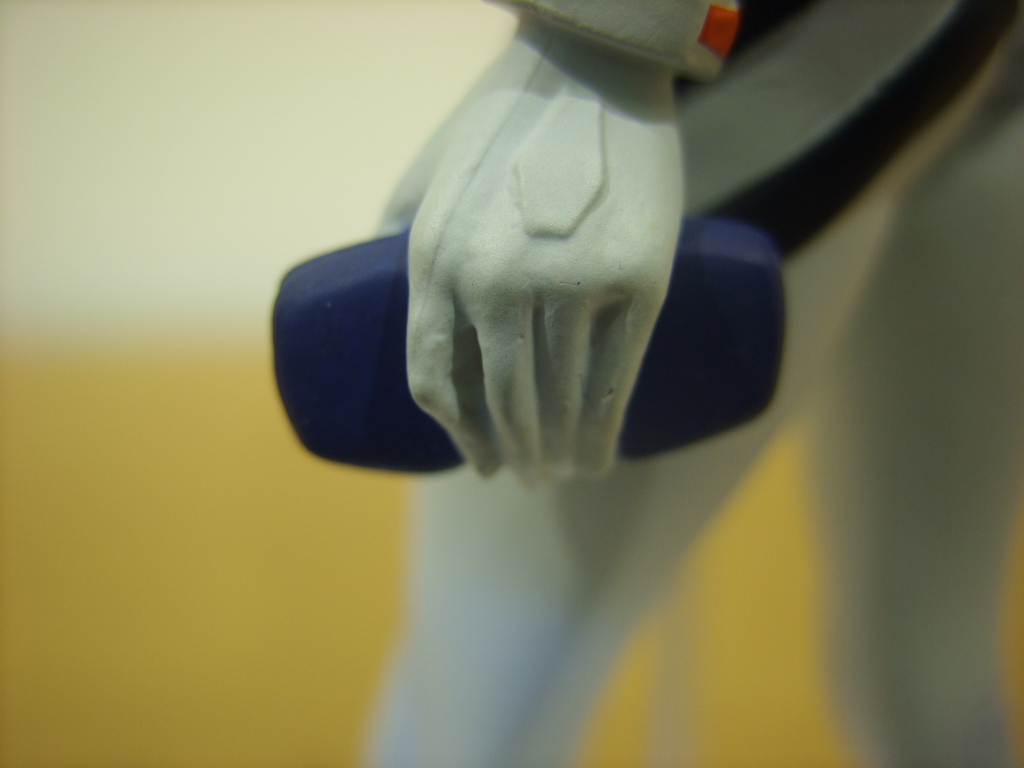 The molds on this figure are good, and there are no obvious gaps between the various pre-assembled parts; even the seam in her hair is fitted well. However, I do have one beef with this figure. As stated earlier, one of the design traits of all female characters in Evangelion- regardless of age or standing height- is that they have proportionately-longer legs. Well, in this case, Rei’s legs are way too long. What I mean is, she is supposed to stand noticeably shorter than Misato, and compared to the companion EX Figure Misato Katsuragi, she’s only 7½”. While this makes her an inch shorter than the Misato figure (appropriate to how they compare in both the series and movies), the length of the figure’s legs just seem too long. And even though she’s supposed to be thin as a stick (she’s 14, so what do you expect?), the long legs seem to throw the rest of her off because it makes her seem too thin proportionately everywhere else. (It’s like she’s of a smaller scale from the hips-up, and of a larger scale from the hips-down!) Now, maybe this is just the style used by the sculptors at Sega, but with the impressive work on the Misato figure, my expectations were let down a little here. Additionally, even though Plug Suits hug the Children like there’s no tomorrow & leave very little to the imagination, there’s a slightly-odd crease along her stomach which doesn’t quite fit her pose. This may be a simple QC error, but considering the quality of the rest of the figure, and that other areas don’t have creases where they should logically be, it is noticeable.

Overall, for the price, you get a good representation of the character. Paint apps do not bleed over, and sculpts are accurate save for the two small exceptions above. The handrail will not bend or break unless you put pressure on it (so don’t!) and both of her arms are PVC, so if she falls there’s little to worry about. And even though she is a small-sized character to begin with, at 1/6th-scale she takes up equally little room on your shelf. That’s not surprising really, since the EX Figure Rei Ayanami set is frequently found in UFO catcher game machines across Japan. 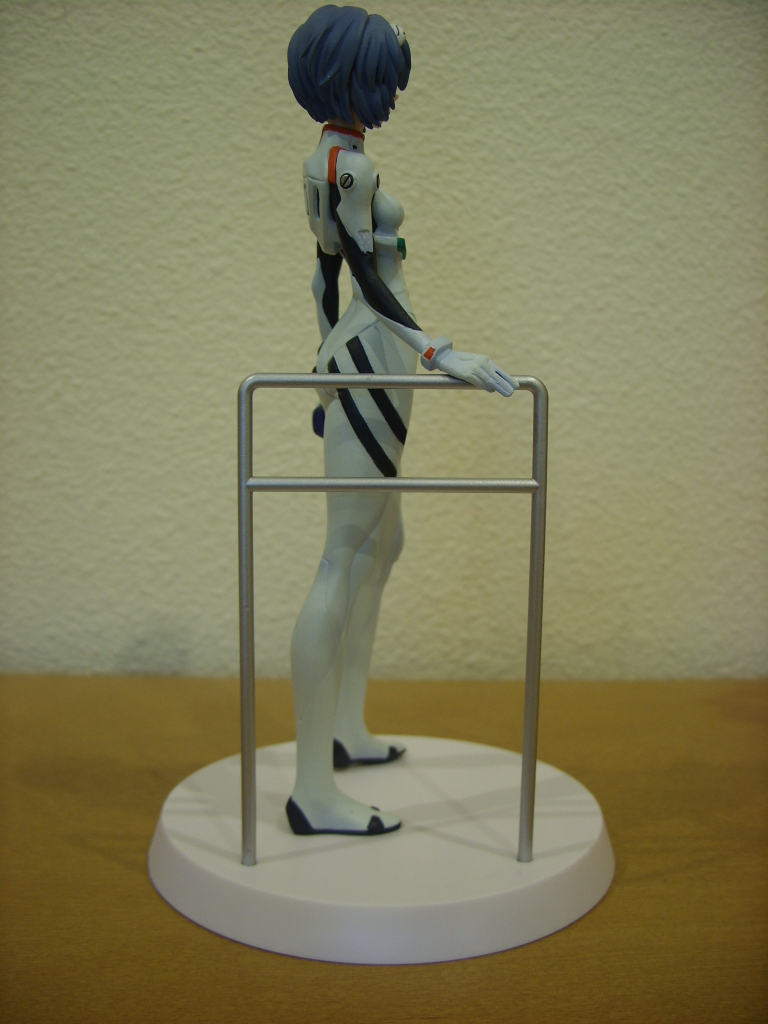