The original Starship Troopers novel by Robert A. Heinlein featured futuristic soldiers armed with exoskeletal powered suits that made them look like mechanical gorillas. Decades later, Kazutaka Miyatake of Studio Nue drew a version of the suit for a Japanese edition of the novel -- this design was later used with slight revisions for the 1988 Starship Troopers (Uch? no Senshi) anime.

This Marauder toy was originally packed in with a special limited edition release of the Starship Troopers 3 DVD. Limited to 7,000 pieces, the set originally retailed for 7,700 yen in 2008. 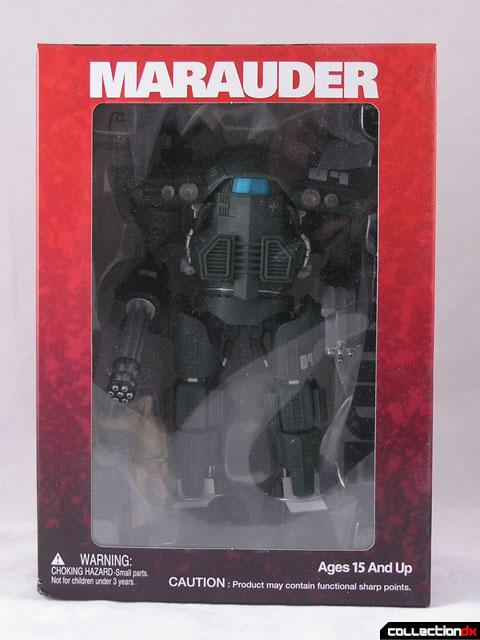 It was released by Yamato USA without the DVD, in special packaging for the US market in 2009. Ironically, there is a limited edition DVD set in the states that has a different, much lower quality Marauder included with it. 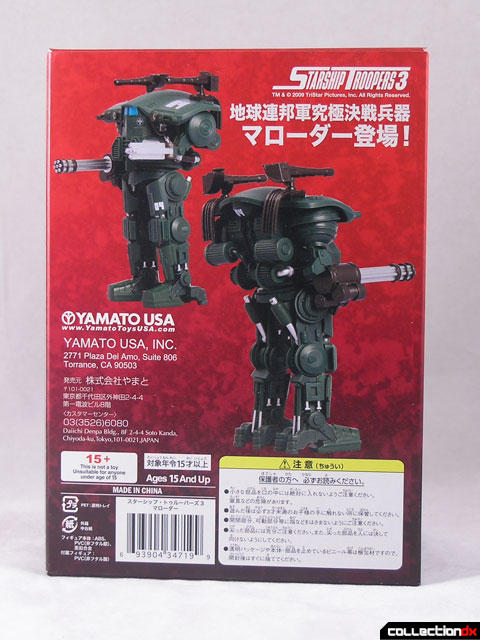 The Marauder toy is a simple action figure with a satisfying weight. The thing is solid and durable. Not that you would want it to, but it could take a shelf dive and survive no problem. 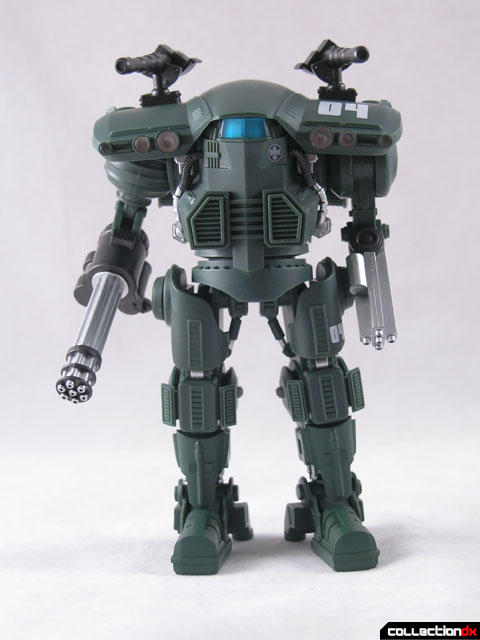 The whole toy is cast in a drab olive green with no weathering. Paint detail consists of logos and warnings. Other parts are painted or molded in color. 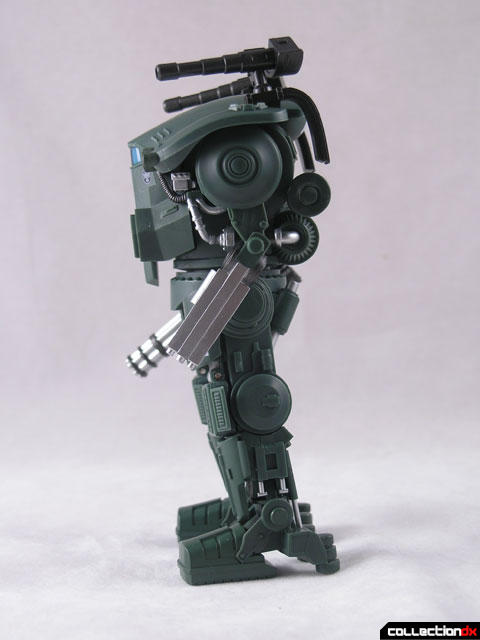 The body is one big block of plastic. There are no hatches or inner compartments. Two guns swivel on the top. The windows are translucent blue plastic but there is nothing behind them. Various pipes are molded in color. 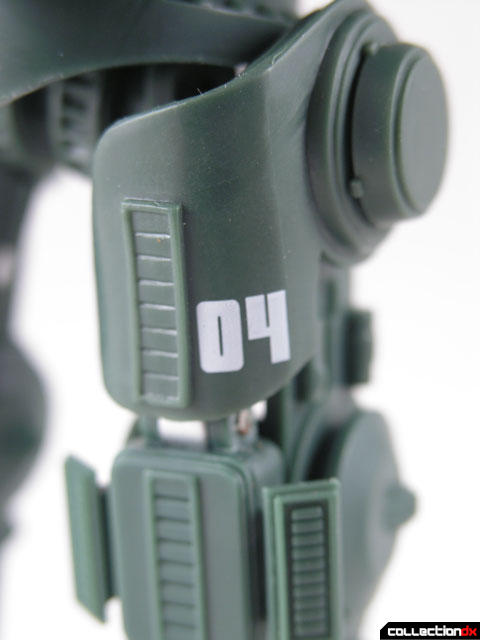 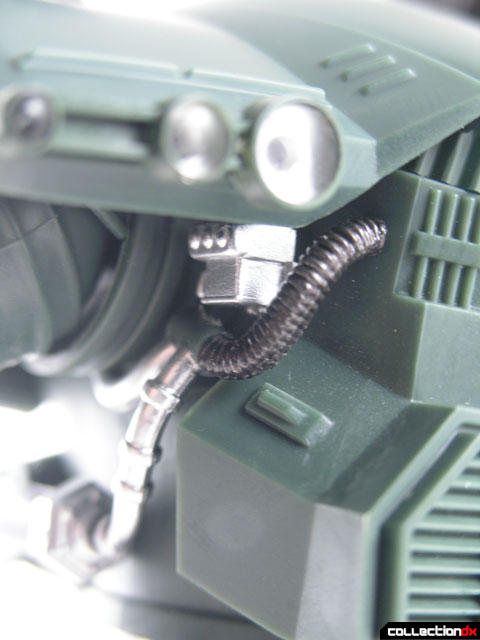 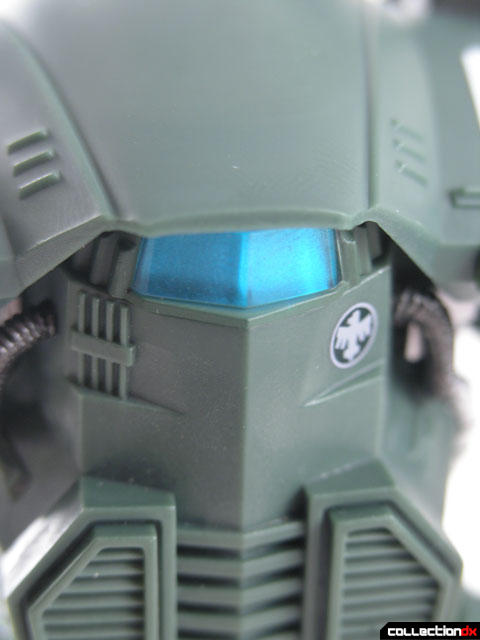 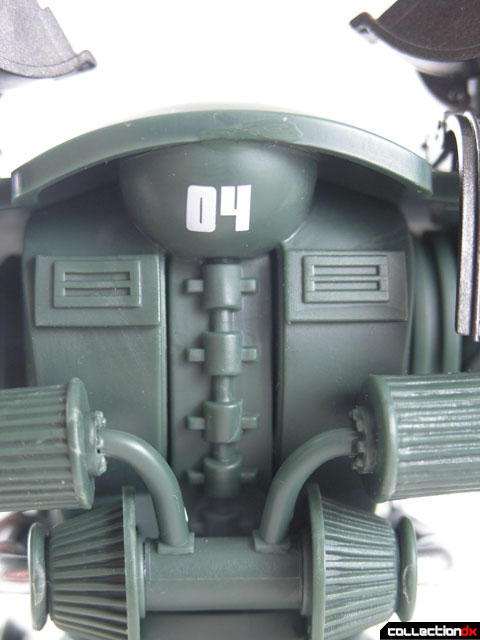 Each arm rotates, but not the full range of motion you would like. The right arm has a gatling cannon that is attached by a ball joint at the shoulder this arm actually has a great range of motion. The barrel can turn. The left arm can swivel back and forth but does not rotate at the shoulder. 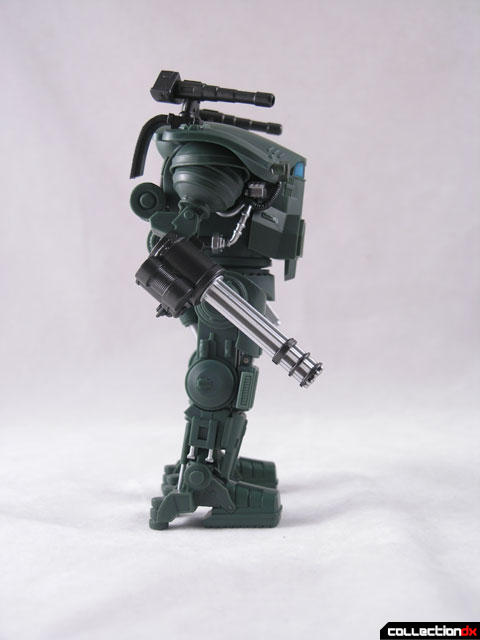 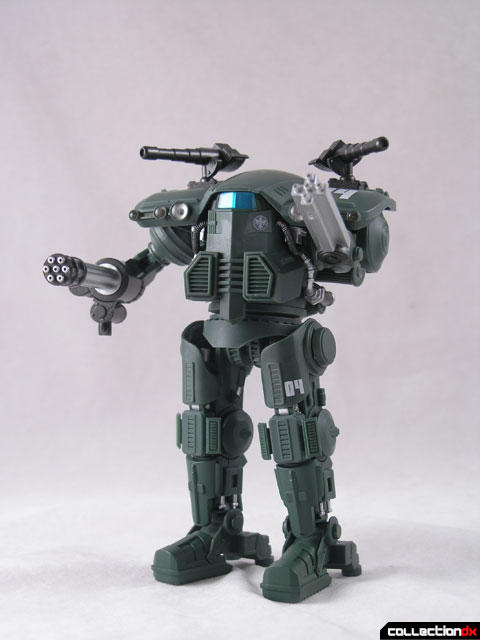 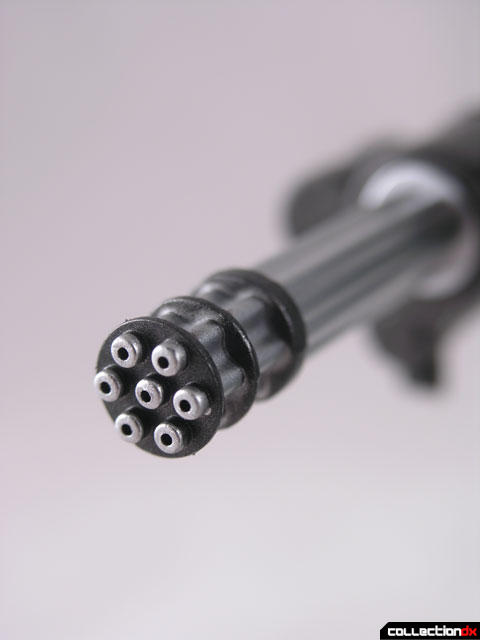 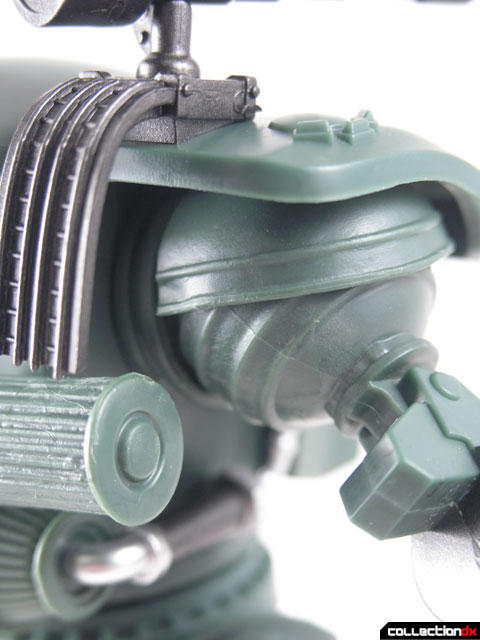 The toy can pivot at the waist. 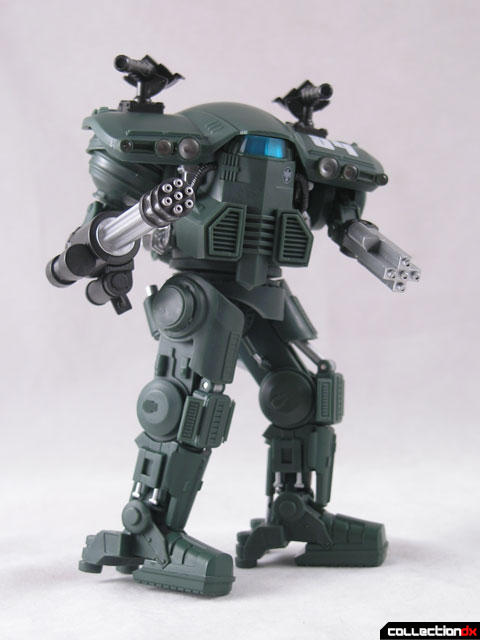 The real joy here is in the legs. I am a sucker for working leg pistons, and this toy’s got them. You’ve got a multi-segmented knee featuring working hydraulics, and then a super articulate ankle with hydraulics in the back. It’s a very cool touch. The feet can get a little loose, so be careful of it toppling over. 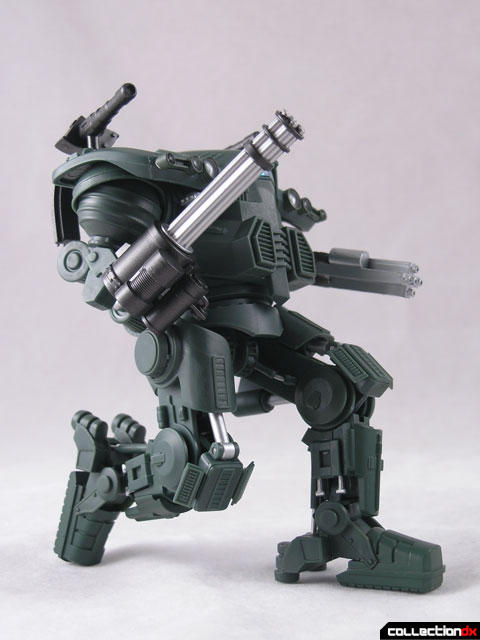 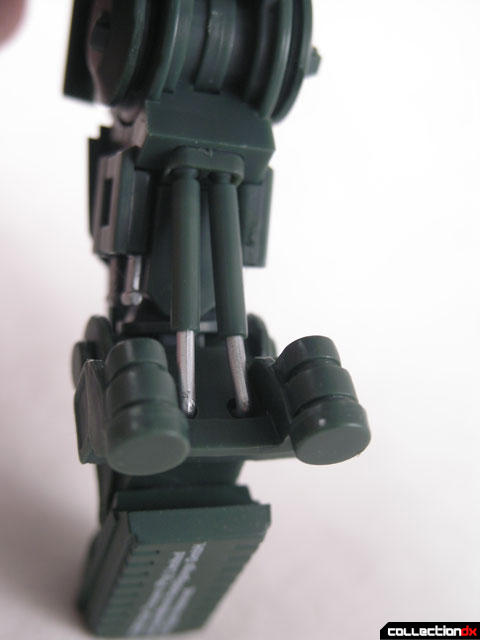 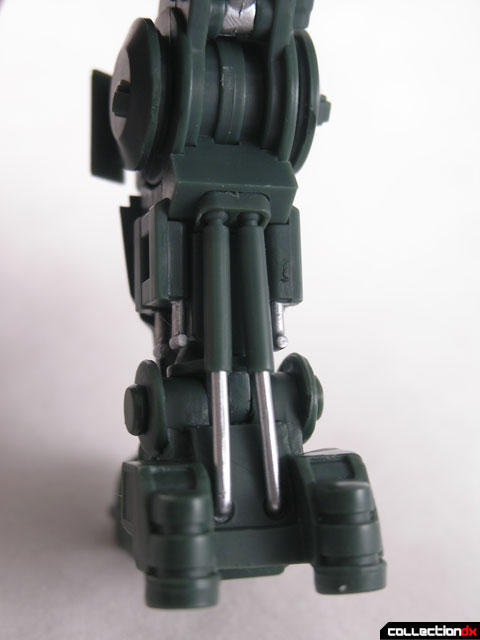 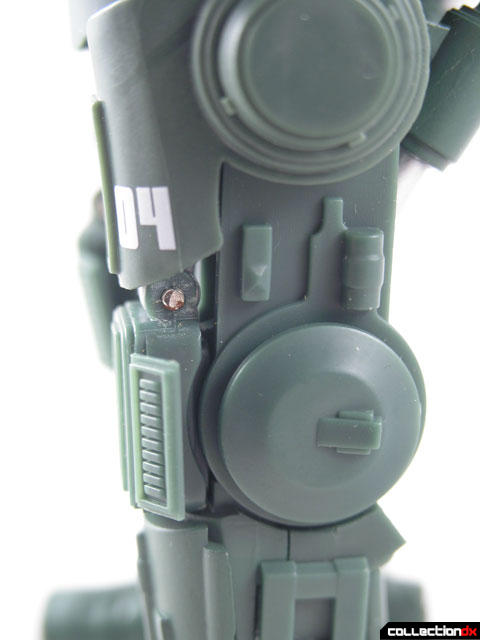 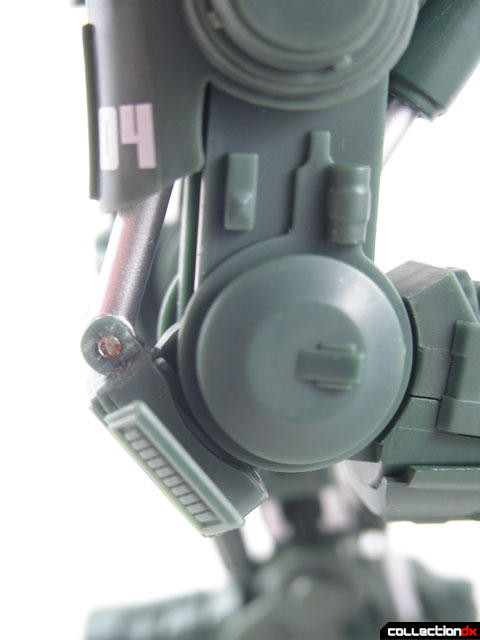 Most of the toy is made out of hard plastic, maybe POM? With PVC and ABS parts. But there is diecast, most noticeably in the pistons and the feet. This toy does not contain enough metal to be considered gokin though. 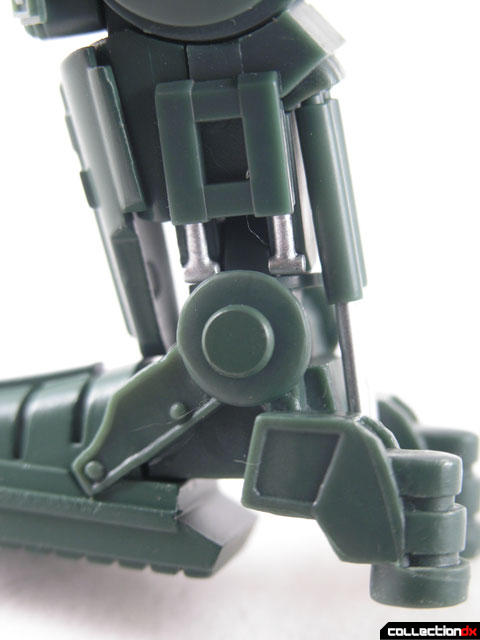 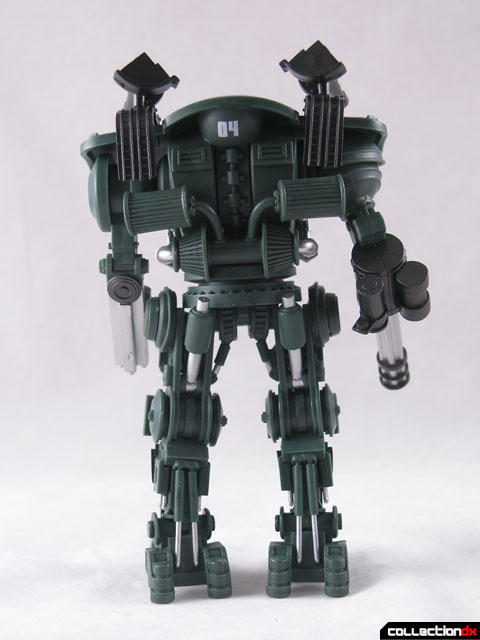 Included with the toy is also a soldier figure, posed as if he is leaning up against the powered suit. The figure and suit are supposedly in 1/36 scale, so they can be added to dioramas with other similar scale military models. 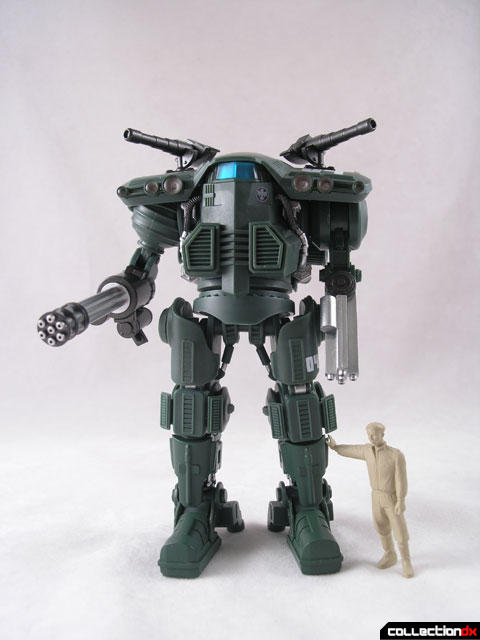 It’s somewhat big (6 inches), it’s heavy, and it’s (relatively) affordable. Kudos to Yamato USA for bringing this toy over to the states. I just wish though that there was some kind of opening cockpit or something... 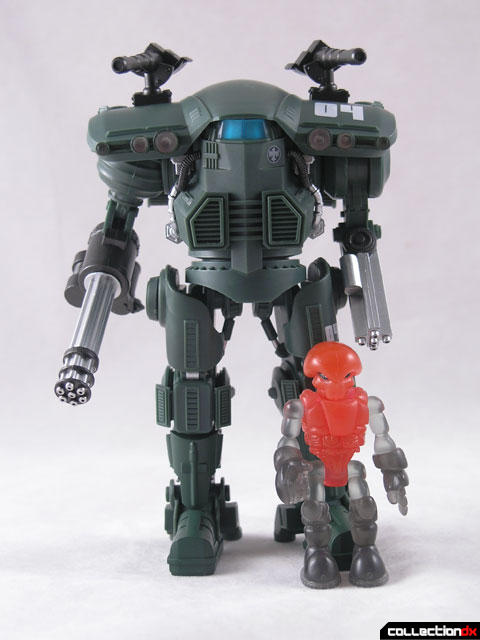 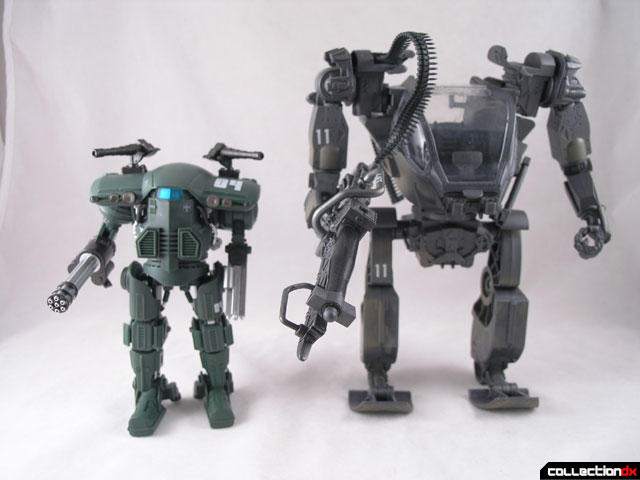 the suit ill be a bit smaller. But it;s good enough. If just they made the suit from district 9...

Kind of a weird choice of pose for the little figure, to just have him chillin' like that. Not necessarily bad, just not something you see everyday.

Having not seen ST3, the left arm looks like a carbine or dart launcher.

I like this design specifically because it doesn't have a solid-impenetrable-armor-look to it- just cheesy plates bolted on a complex internal structure. Exposed pistons & servos (I agree, awesome!) and ammunition clips helps emphasize that.

As you point out in that last photo, I'd take a Marauder over the "Avatar" AMP Suit any day because it provides more user protection, has more weps, and doesn't utilize stupid moon-shoe feet. While I love exo-skeleton slave-labor control systems like the AMP utilizes, I gotta say the Marauder just looks more bad-ass.
------------------------------
CollectionDX Staff

Even if I liked this toy, & I don't. I wouldn't want to own something that came from such a bad movie.