For my first official review for anime.collectiondx.com I would like to do something a little different. Instead of getting into the fine details of the anime in which these vehicles represent, I would like to give you a little background on these radical machines.

Well, I guess I can say that these 1/64 scale collectors cars are adorned with the characters from the anime Magical Girl Lyrical Nanoha Strikers. Samples were provided to CollectionDX by Aoshima. You can get these great cars HERE, as well as other anime related items. 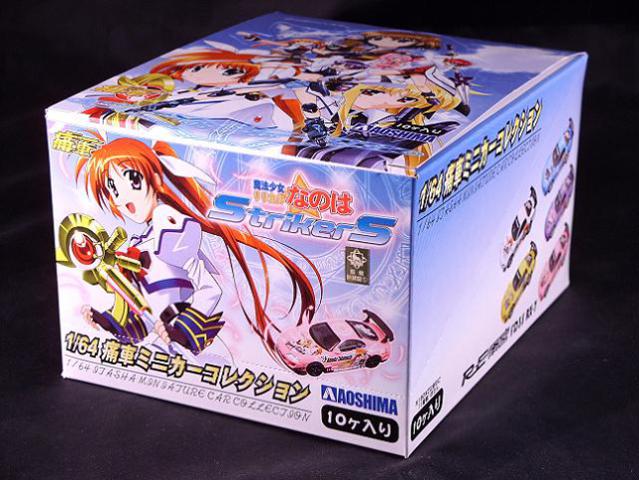 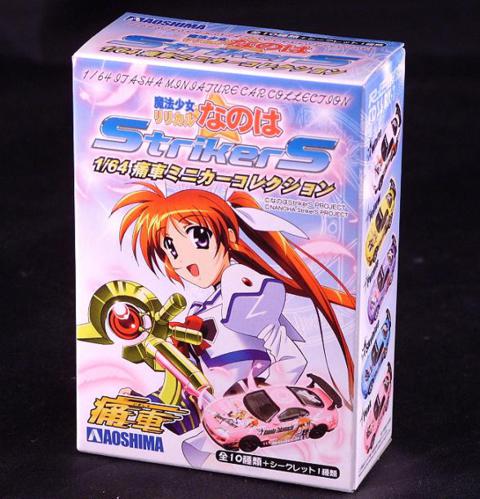 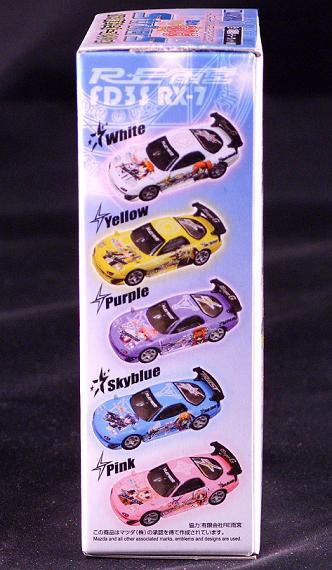 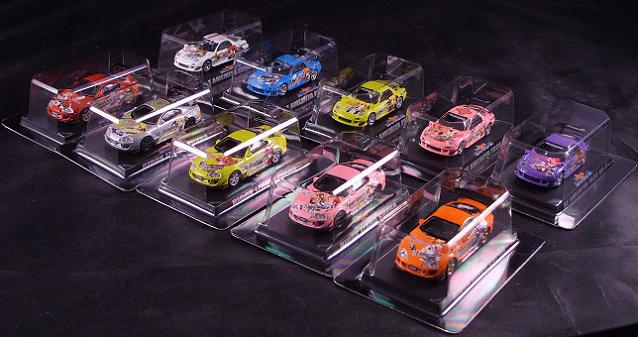 Aoshima has recreated the third gen. RX7 in 1/64th scale diecast. The replica is a faithful reproduction in every detail to the original car, with the addition of ground effects, great rear spoiler, highly detailed graphics package, custom gold 5 spoke rims, and flawless paint.

Here are the statistics and a little history about the RX7:

The Mazda RX-7 is a sports car produced Mazda from 1978 to 2002. The original RX-7 featured a 1146 cc twin-rotor Wankel rotary engine and a sporty front, mid-ship, rear-wheel drive layout. The RX-7 was a direct replacement for the RX-3 (both were sold in Japan as the Savanna) and subsequently replaced all other Mazda rotary cars with the exception of the Cosmo.

The original RX-7 was a sports coupe. The compact and light-weight Wankel engine or rotary engine is situated slightly behind the front axle, a configuration marketed by Mazda as "front mid-engine". It was offered in America as a two-seat coupe, with optional "occasional" rear-seats in Japan, Australia, and other parts of the world. The "occasional" rear-seats were initially marketed as a dealer installed option for the North American markets. The RX-7 made Car and Driver magazine's Ten Best list five times.

The third and final generation of the RX-7, was an outright, no-compromise sports car by Japanese standards. It featured an aerodynamic, futuristic-looking body design (a testament to its near 11-year lifespan). The 13B-REW was the first-ever mass-produced sequential twin-turbocharger system to export from Japan, boosting power to (252 hp) in 1993 and finally (276 hp) by the time production ended in Japan in 2002.

Series 6 (1992–1995) was exported throughout the world and had the highest sales. In Japan, Mazda sold the RX-7 through its Efini brand as the Efini RX-7. Models in Japan included the Type R, the top-of-the-range Type RZ, the Type RB, the A-spec and the Touring X, which only came with a 4-speed automatic reducing power to (252 hp), but the others ran on the standard (261 hp) engine with a 5-speed manual gearbox. Only the 1993–1995 model years were sold in the U.S. and Canada. Series 6 came with (252 hp) and (217 ft·lb). In the UK only 124 examples of this model were sold through the official Mazda network, Only one spec. was available and this included twin oil-coolers, electric sunroof, cruise control and the rear storage bins in place of the back seats.

Series 7 (1996–1998) included minor changes to the car. Updates included a simplified vacuum routing manifold and a 16-bit ECU allowing for increased boost. In Japan, the Series 7 RX-7 was marketed under the Mazda brand name. The Series 7 was also sold in Australia, New Zealand and the UK. Series 7 RX-7s were produced only in right-hand-drive configuration.

Series 8 (January 1999– August 2002) was the final series, and was only available in the Japanese market. More efficient turbochargers were installed, while improved intercooling and radiator cooling was made possible by a revised frontal area. The seats, steering wheel, and front and rear lights were all changed. The rear spoiler was modified and gained adjustability. The top-of-the-line "Type RS" came equipped with a Bilstein suspension and 17" wheels as standard equipment, and reduced weight to (2822 lb). Power was (276 hp), with (231 ft·lb) of torque as per the maximum Japanese limit. The very limited edition Type RZ version included all the features of the Type RS, but at a lighter weight (at 1270 kg). It also featured custom gun-metal colored BBS wheels and a custom red racing themed interior. Easily the most collectible of all the RX-7s was the last 1,500 run-out specials. Dubbed the "Spirit R", they combined all the "extra" features Mazda had used on previous limited-run specials. They still command amazing prices on the Japanese used car scene years later. Sticker prices when new were 3,998,000

There is also a "Touring Model" which includes a sun roof, and Bose stereo system. Compared to the R1 and R2 which both don't have a moon roof, and they have an extra front oil cooler in the front bumper, and other race modification equipment.

If you liked the above RX7 you'll love this next car! Aoshima has reproduced the 4th generation Supra as a Import Tuner model In 1/64th scale Adult collectible. Complete with custom anime graphics, flawless paint, and a beautiful ground effects package. This 1/64th scale diecast car would be a great addition to any collection. I love the minute details such as the intercooler sitting in the front spoiler, the the right hand drive interior, custom rims, headlight and tail lights.

Here are the statistics and a little history about the Supra:

The Toyota Supra is a sports car/grand tourer that was produced by Toyota Motor Company from 1979 to 2002. The styling of the Toyota Supra was derived from the Toyota Celica, but it was both longer and wider. Starting in mid-1986, the Supra third generation became its own model and was no longer based on the Celica. In turn, Toyota also stopped using the prefix Celica and began just calling the car Supra. Due to the similarity and past of the Toyota Celica's name, it is frequently mistaken for the Toyota Supra, and vice versa.

The Supra traces much of its roots back to the Toyota 2000GT with the main instance being its engine. The first three generations were offered with a direct descendant to the 2000GT's M engine. All four generations of Supra produced have an inline 6-cylinder engine. Interior aspects were also similar.
a naturally aspirated 2JZ-GE producing 220 hp at 5800 rpm and 210 ft·lb at 4800 rpm of torque and a twin turbocharged 2JZ-GTE making 276 hp ( and 318 ft·lb of torque for the Japanese version. For the export model (America/Europe) Toyota upgraded the Supra turbo's engine (smaller, steel wheeled turbochargers, bigger fuel injectors, etc.). This increased the power output to 320 hp at 5600 rpm and 315 ft·lb at 4000 rpm. The turbocharged variant could achieve 0–60 mph in as low as 4.6 seconds and 1/4 mile in 13.1 seconds at 109 mph . The turbo version was tested to reach over (174 mph) all-stock, but the cars are restricted to just (112) mph in Japan and (155) mph elsewhere.

As an iconic sports car, the Supra has appeared in numerous video games, movies, music videos and TV shows. Some of the most notable appearances include the Gran Turismo, Need for Speed, and Midnight Club series of video games and the 2001 film, The Fast and the Furious.There is a lot of news about the return of the supra in 2010. 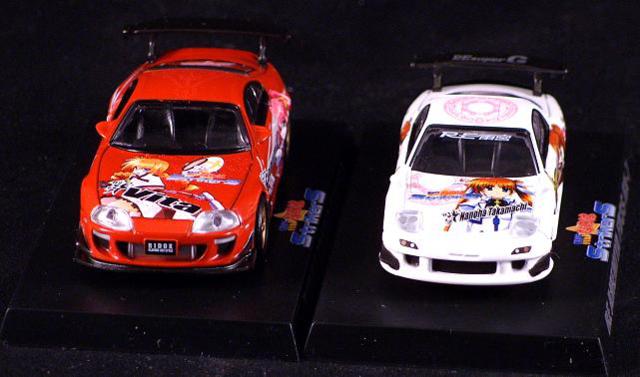 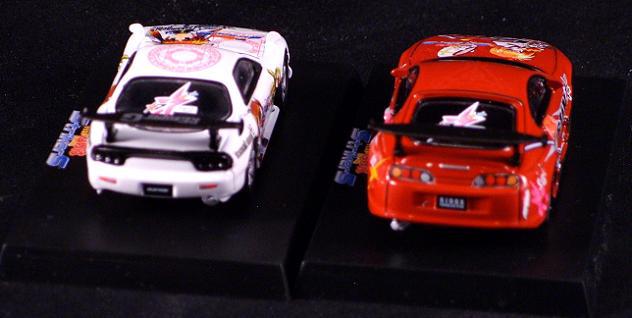 In conclusion, every time I pick up I these cars I am amazed with the quality and detail. I feel for the short amount of money spent, you cant loose! Aoshima has done a great job as these cars would make a great addition to any Otaku's anime collection.