Today I will be reviewing the Lian/Lion DX re-issue, made by Sonokong/Takara. The sample for today's review was provided graciously by our friends over at Big Bad Toy Store.

Without getting into too much detail....Lian or Lion (depending on where you grew up) appears in the anime, Brave Command Dagwon.

Lian is a sword-shaped old robot kinight warrior (now don't laugh) from a world of sword shaped robots that have been exterminated by the evil Sargasso a long time ago. Lian is not only a mighty warrior but he is the mentor of Gunkid. Lian is also utilized by the Dagwon team as a very powerful weapon to defend against the evils of Sargasso as seen in the video below.

To start off with, the packaging is a nice change from the usual heavy corrugated cardboard box with great pictures of the toy. It has all those same qualities mentioned above plus it is also a window box. I love the window box, it lets you see exactly what you are getting. I wish all packaging was like this. 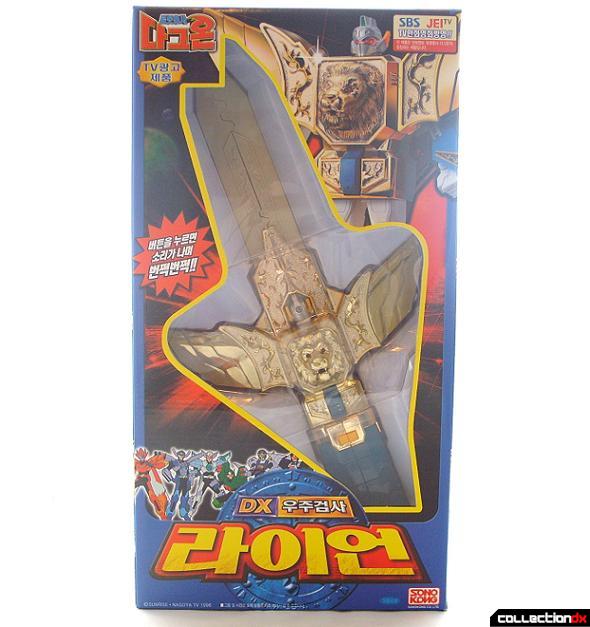 Lian stands just under 9" tall at the top of his shoulder pads in robot mode. The figure is comprised mainly of plastic with a flexible PVC blade and weighs in at slightly under 13 ounces. Lian is very sturdy in robot mode due to the fact of its simple design and use of quality materials. Unfortunately, the simple design also makes the toy very limited in articulation. The only parts that move are the elbow joints. 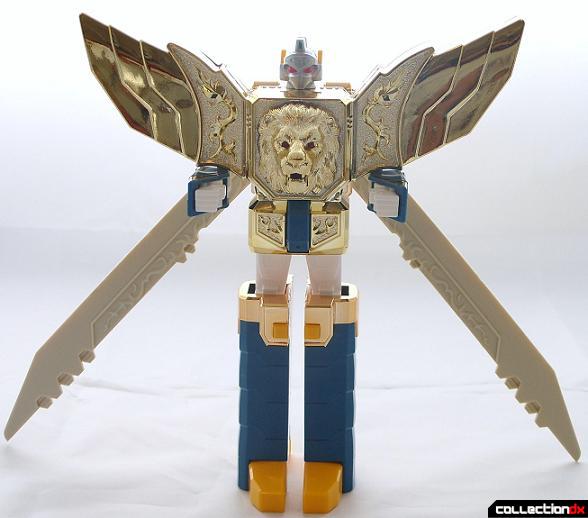 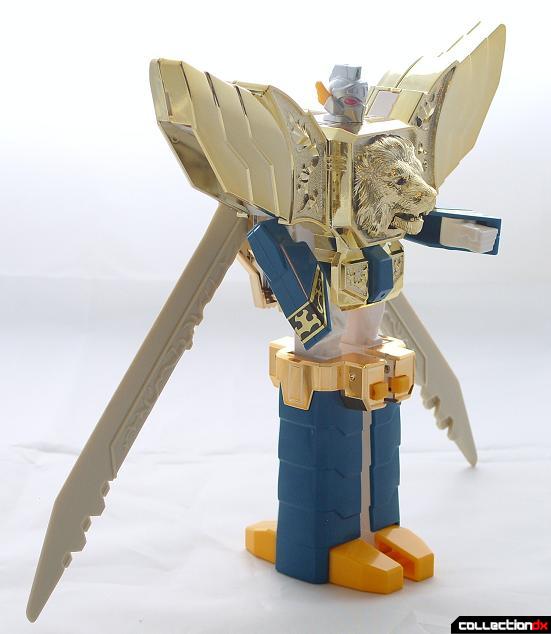 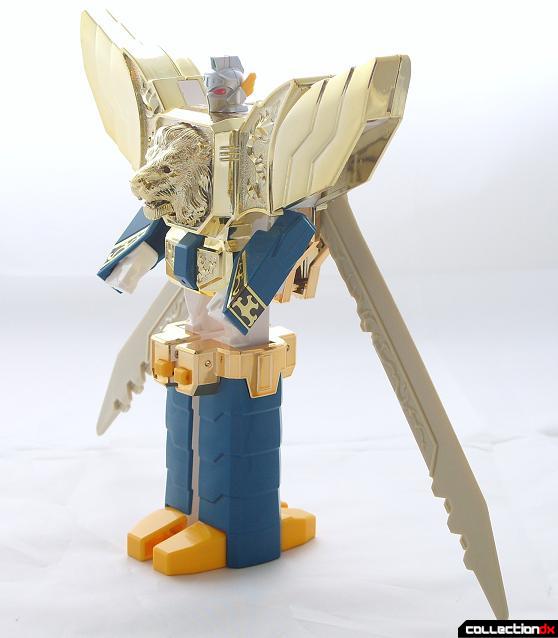 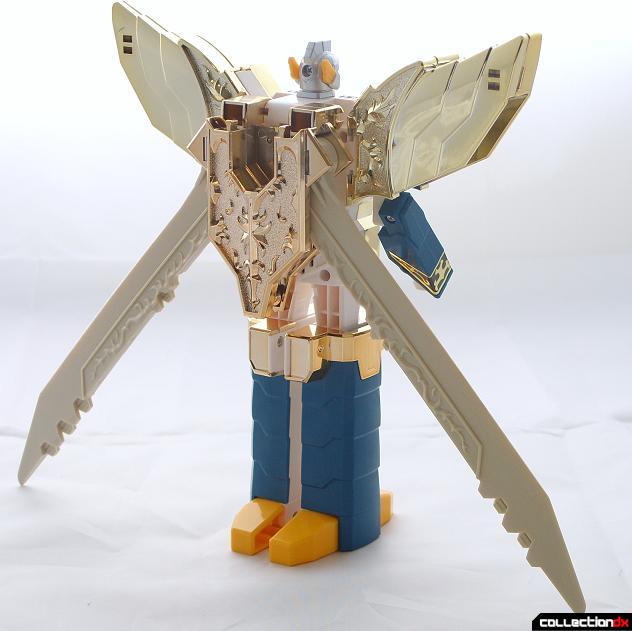 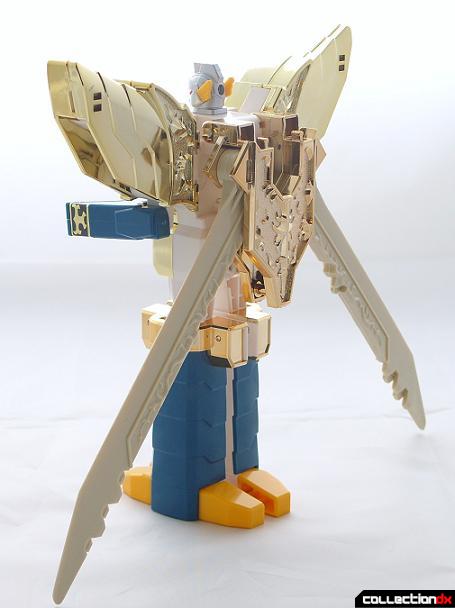 Here is where Lian makes up for the lack of articulation. Just check out the well detailed lion head that adorns his chest and the ornate marking that are on the shoulders, waist and his forearm gauntlets. In my opinion, he looks very medieval, which lends to the back story of him being a very old robot knight. 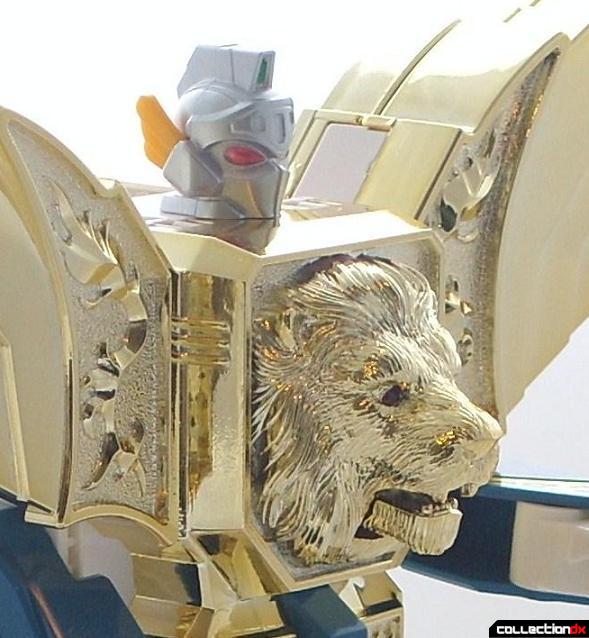 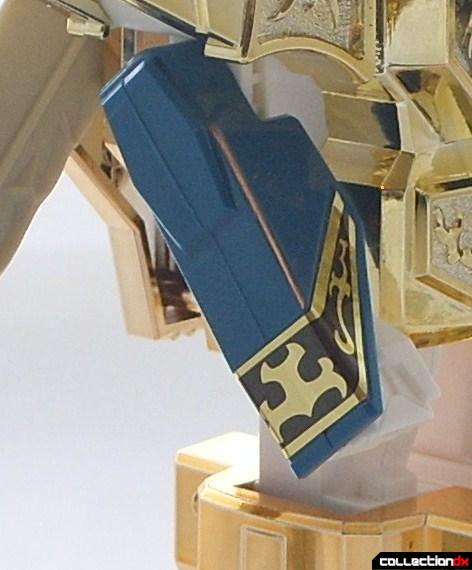 Another feature that makes up for the above mentioned shortcomings is the lion roar / lion eyes light up gimmick. You are gonna have to imagine the powerful roar that sounds when you press either the lower part of the lion's jaw or the center cod piece. I'd roar too if you touched my cod piece, LOL. Along with the mighty lion roar, the lion eyes will light up bright red as seen in the second photo down below. 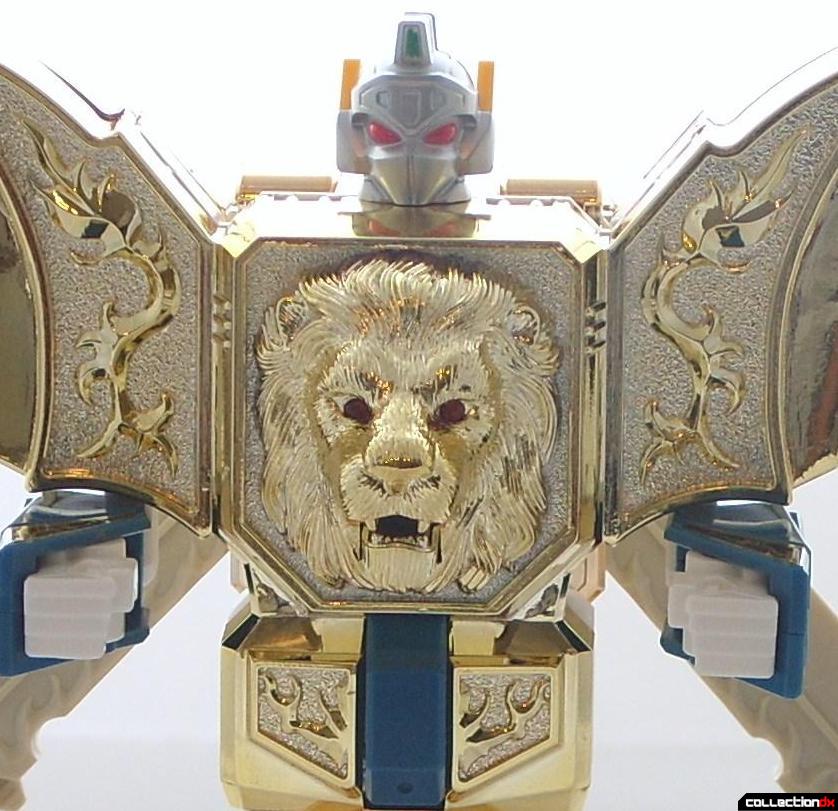 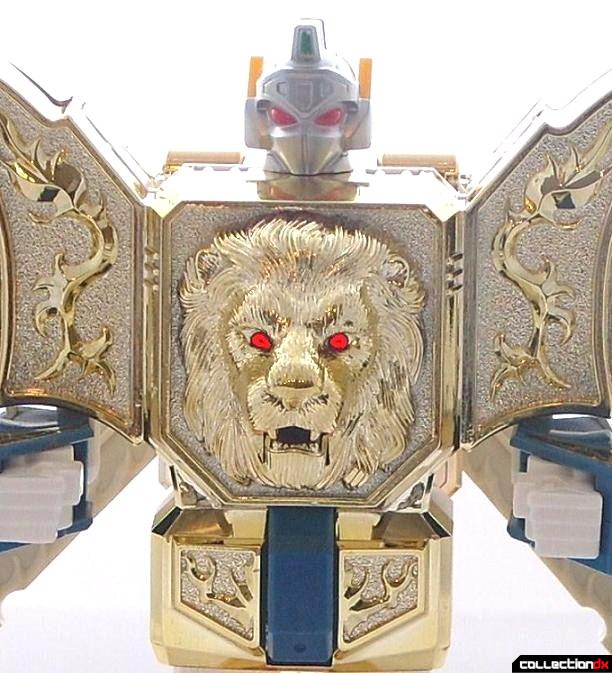 Lian is approximately 17" in sword mode. Of the 17", only 6.5" of it is the blade length, making proportions a bit exaggerated. I have nothing much to say about this mode because, to be honest, the sword mode is my least favorite mode. I just can't get past how ridiculous it looks, especially when it is wielded by Super Fire Dagwon (as seen below). Note* the third photo down shows the connection point for being held by Super Fire Dagwon as well as the speaker for Lian's mighty Lion roar. 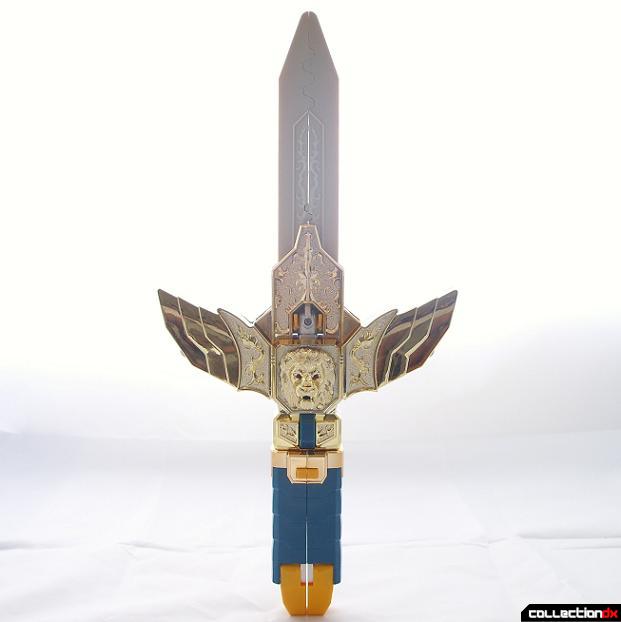 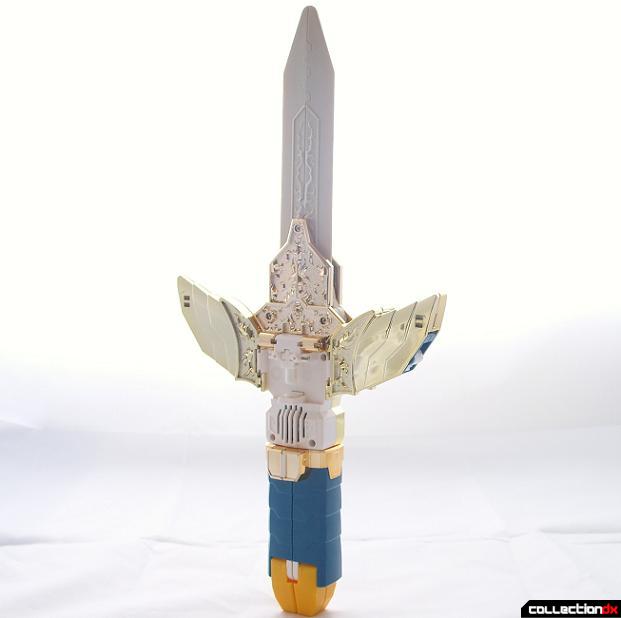 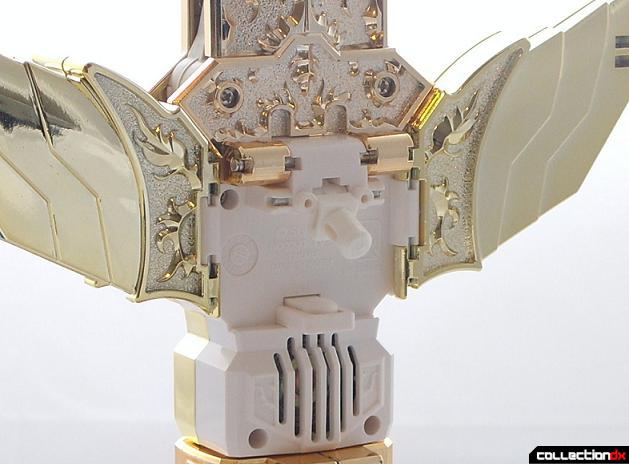 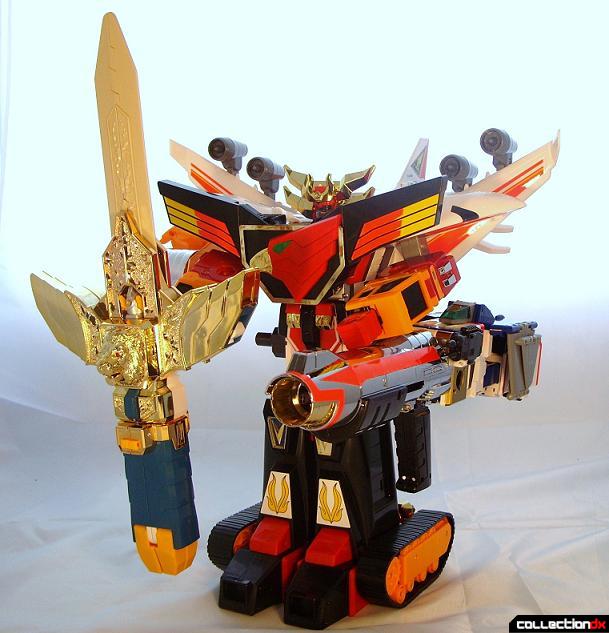 In conclusion, I actually do like this toy. It has some decent play value and is very well made. The only thing that I wish was different would be the sword mode. I really wish the toy designers could have come up with a way to make the blade longer and able to collapse down to a smaller size for robot mode. Let's face it, the sword just looks bizarre, more like an overly ornate knife.

CMs might do a tiny Lian figure for their Dagwon set. That'd be most rocking.

I don't know about the combo robot, but these two accessory bots (Gun Kid and Lian) are pretty sweet!

I'm sure i've seen bootlegs of this...

What are the two pin joints on the back of the shoulders for?

Good Eye! Glad you asked that. Those pin joints allow the back of the shoulders to open up, this is where the 2 AA batteries go, one in each shoulder.

The batteries are in the shoulders???

Strange, I would've thought they'd put them in the legs or under that lion head...

Just want to say good job, but your desription of his back story is a little wrong. His home world was destroyed by Ark Seijin. Sargasso is a prison for intergalactic villains whic got taken over by said prisoners. lian only becomes Gunkid's mentor part ways through the series wen he convinces the other Dagwon members to spare his life and that he would personally teach him how to behave on Earth.

Lian looks awsome. The design of the lion in his chest is outstanding, though i admit the photo of you showing off the light feature did make the Lion look a little scary, but that's not your fault. On it's own the sword mode would look ridiculous, but combined with Fire Dagwon or Power dagwon would make him more awsome then on it's own. Another superb review. :)