Little Busters is another one of those Japanese franchises that spans a variety of media. Most popular as a visual novel, Little Busters has also had Manga adaptations and even a radio play. In fact, it's had pretty much everything BUT an anime.

Komari is a childish character, and that comes across well in this figure. She embodies the Moe character in almost every way. 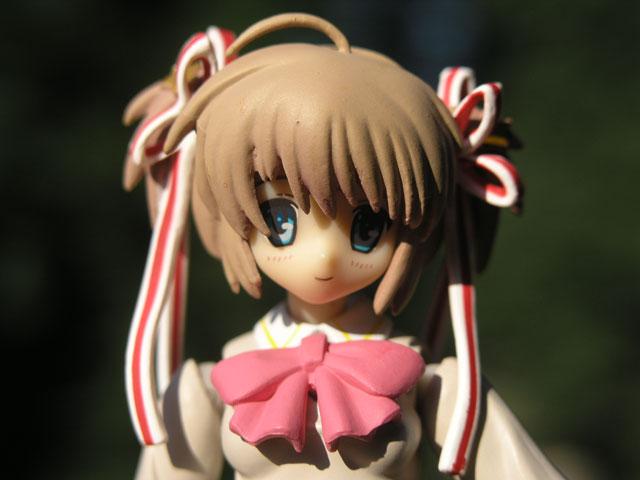 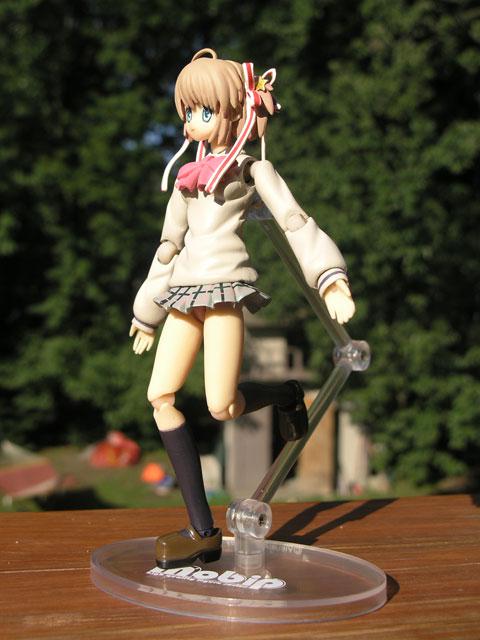 This is the first release in Aoshima's Mobip line, and once can't help but draw comparisons to Figma figures. The joints, articulation and construction are eerily similar. Articulated figures are all the rage, and I couldn't be happier. The heightened competition makes for more characters licensed, making the assortment of characters on the market virtually unlimited. 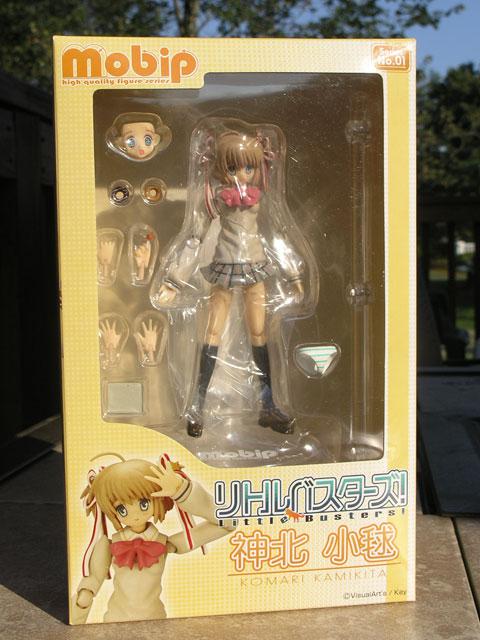 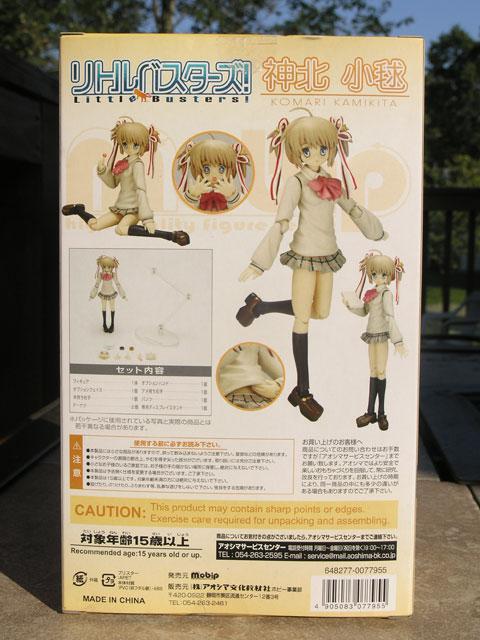 The good news is that the Mobip figure is just about as good as a Figma. The price point is a bit lower, and you will of course only find these characters as Mobip toys. 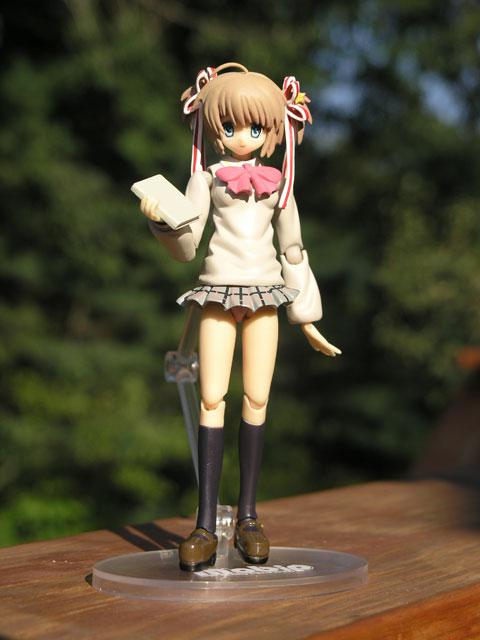 The figure consists of a central core body with rubber clothing over the torso. Each joint is a swivel joint similar to Figma and the like. The joints are tight and hold well, but the color of the joints don't always match up to the skin tone, especially in the knees. 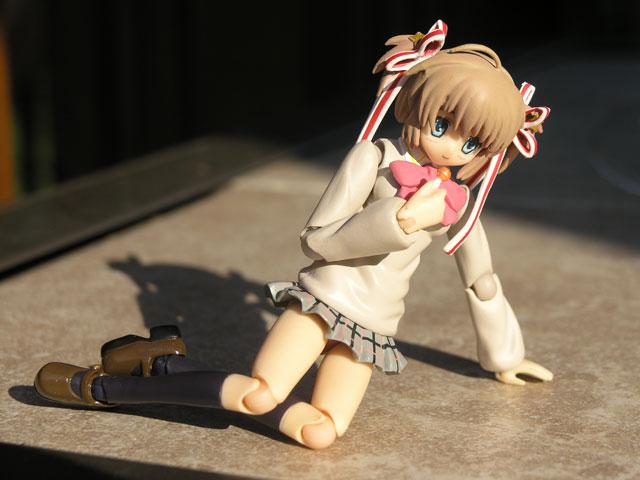 Komari comes with a bunch of accessories, some odd, some downright pervy. As my name may suggest, one of the best is the removable panties. The panties that come with the figure are pink and rubber, and it also comes with a spare set of white panties. 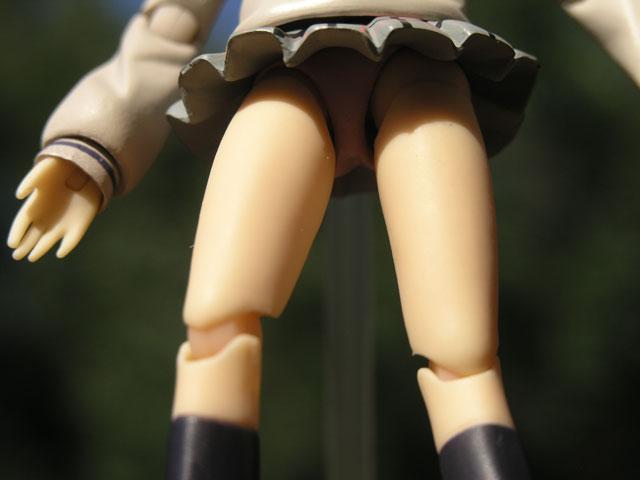 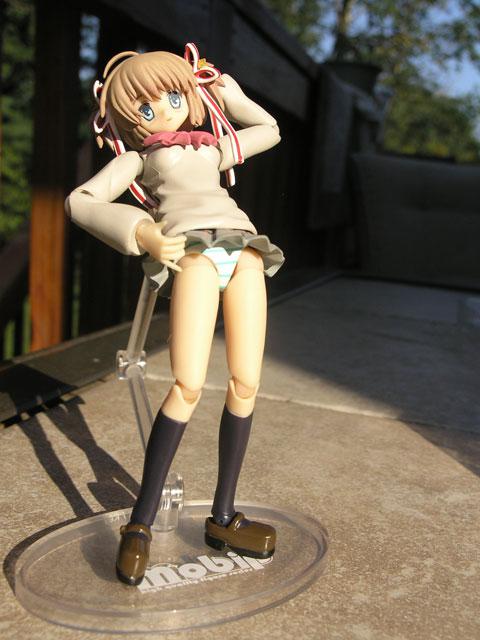 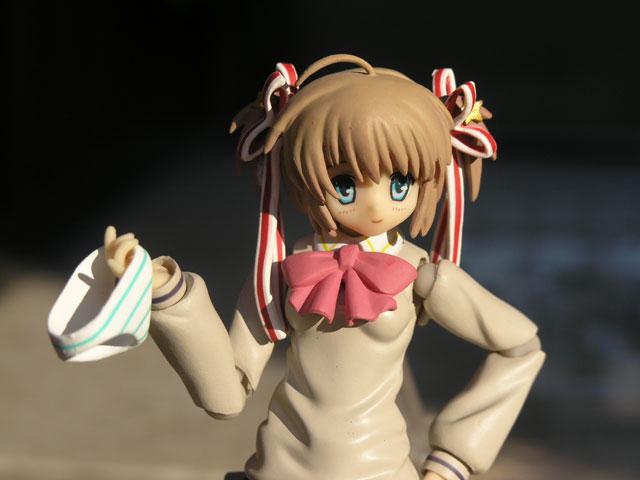 To remove them, you have to remove the legs, but they re-attach easily. And in case you were wondering, she's not anatomically correct, I checked. 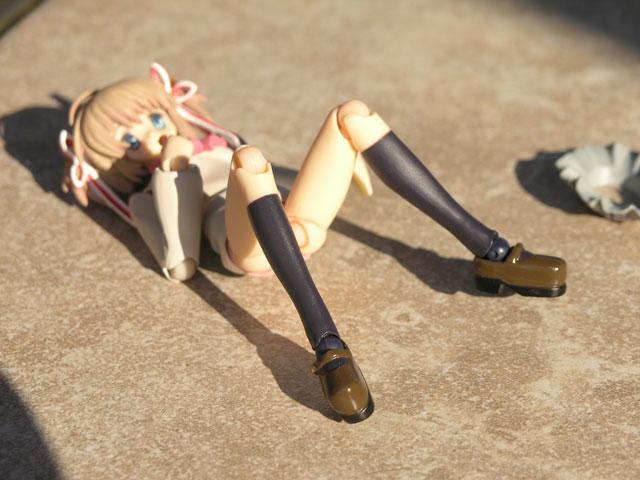 Oh, did I mention there was a Little Busters H-Game? 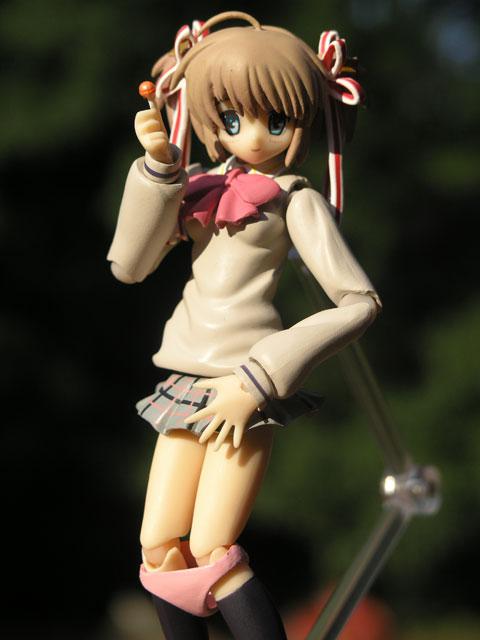 So yeah, other accessories include two donuts (MMM donuts), a few variant hands (one including a lollipop), and a book. The book is keyed to fit into the grasping hand. 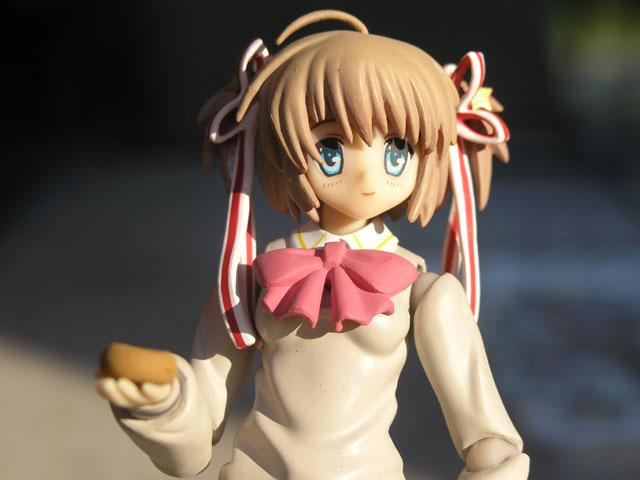 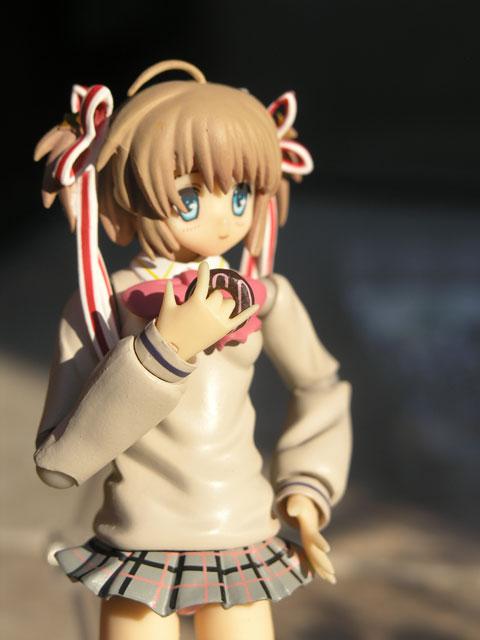 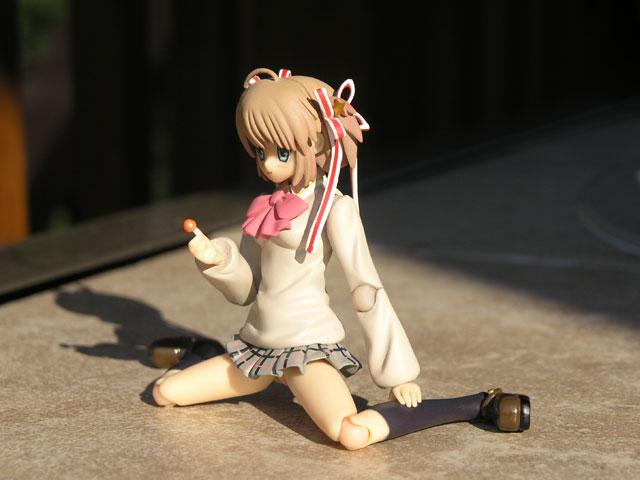 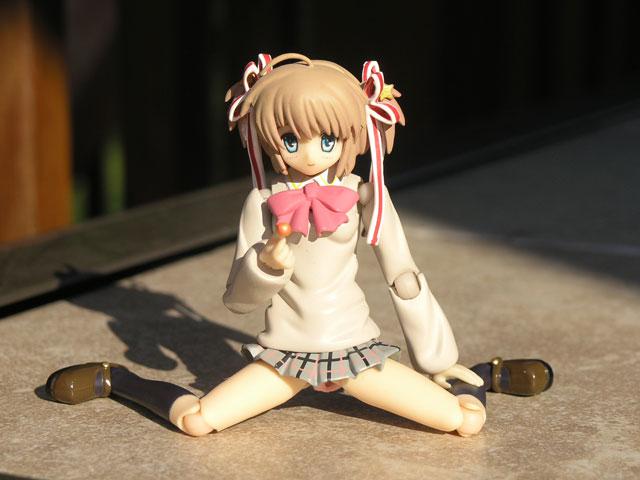 The figure features a variant face to go from her normal doe-eyed look to a starry-eyed look. 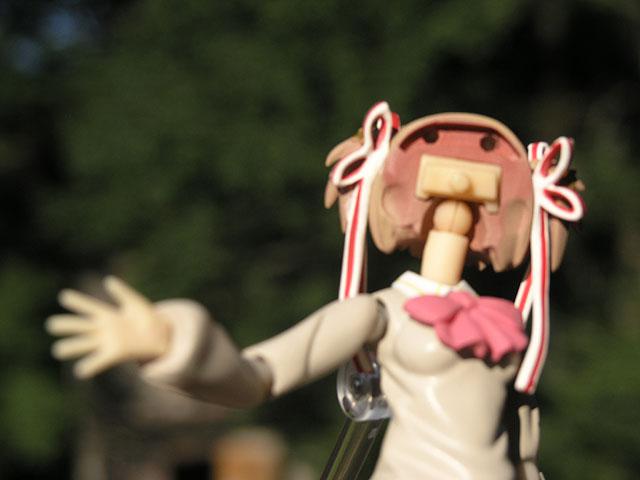 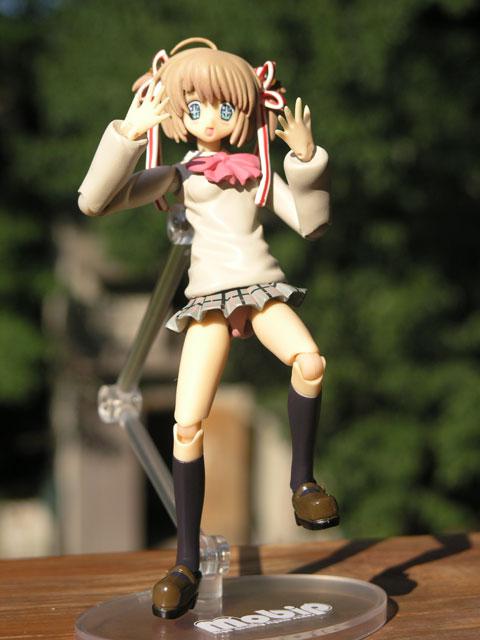 One standout feature of the Moebip line is the stand. Each stand is clear with the logo printed on it, and a sturdy clear articulated arm plugs into it. The arm then plugs into the figure's back and can support almost any pose. 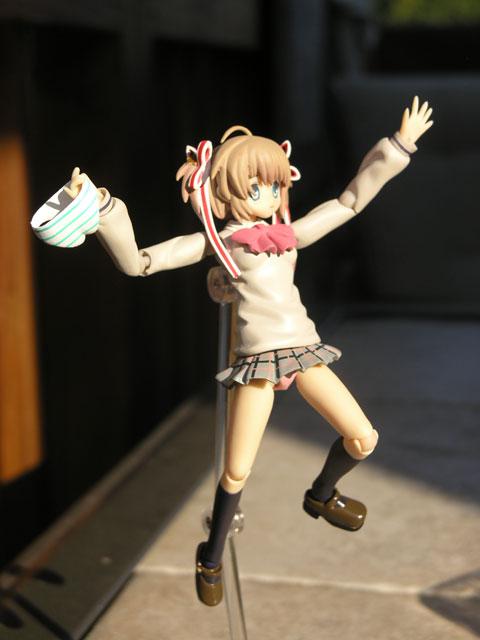 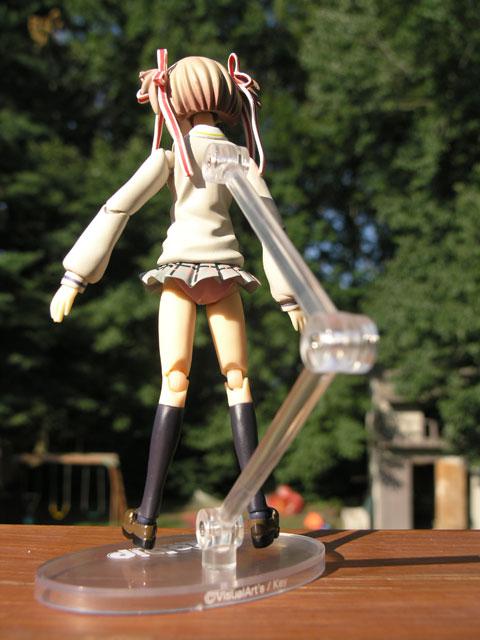 I have to admit, posing this made me feel funny.

So yeah, it's a noble first effort for Aoshima in the poseable figure market, but nothing groundbreaking.