While the Terminator Salvation movie was pretty good, the toys looked pretty terrible. I didn't give them a second look at retail, and now I regret it. Because I dismissed the line, I missed out on this jem of a toy.

It wasnt until I was over a friend's house that I was showed this toy, and seeing I was smitten, he gave it to me.

The Harvester is a giant robot created by Skynet that "harvests" the remaining humans of the surface on the planet. It's arguably the greatest scene in the movie.

As far as toys go, this one is pretty great. 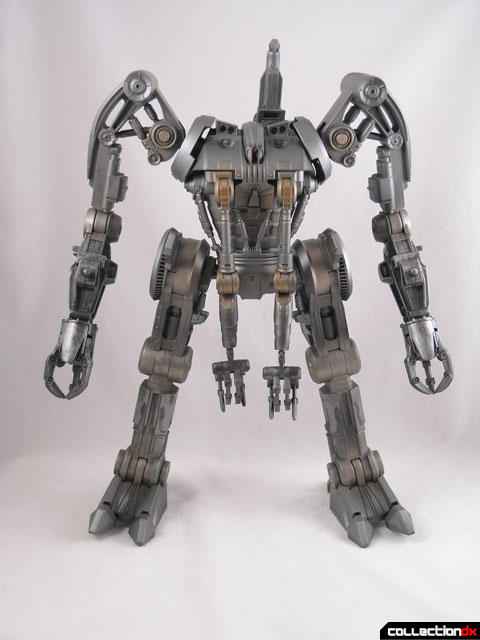 It comes in exposed packaging that really allows you to touch it and activate all of the play features. The downside of that is that the cardboard parts are flimsy and are often mangled. Removing the toy is harder than you would expect due to the abundance of twist ties. Come armed with cutters. 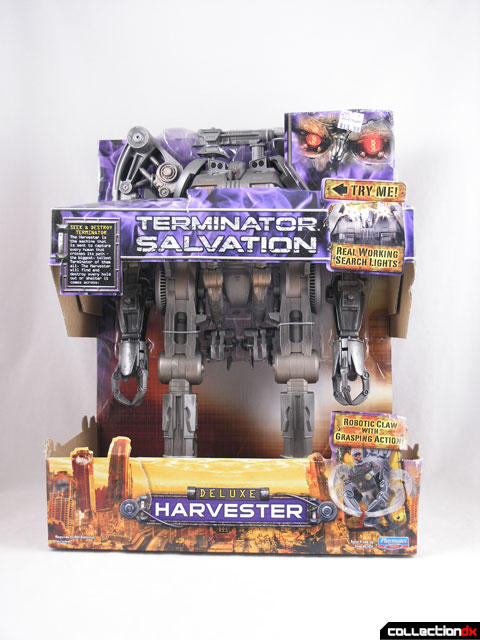 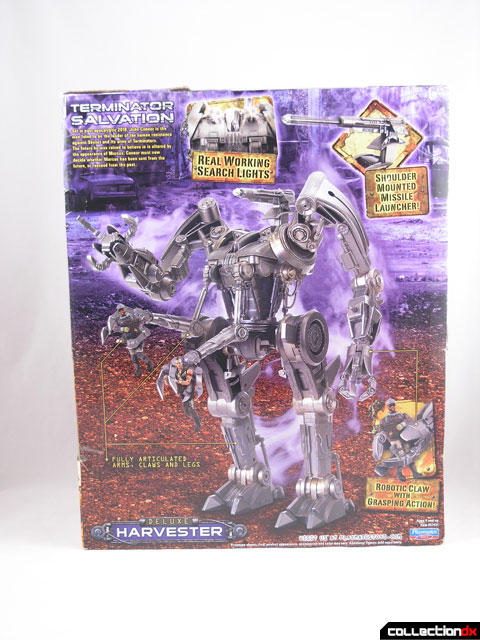 The toy is glorious. It is better than it has any right to be. 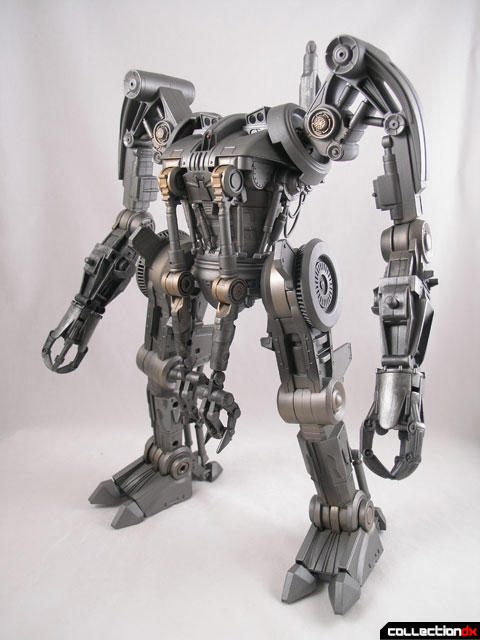 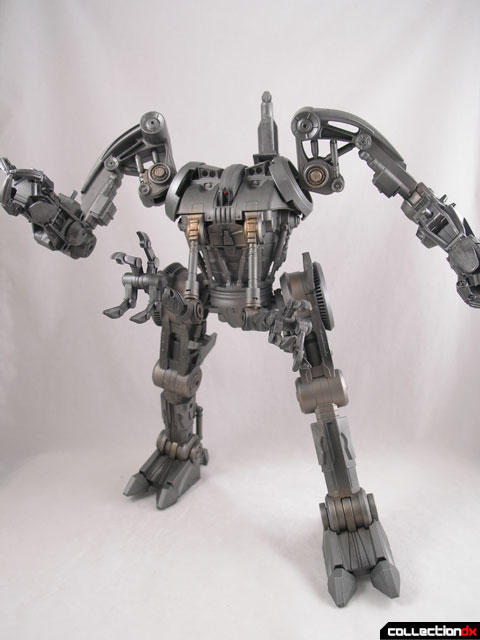 This mechanical behemoth stands fourteen inches tall, and is fully articulated and loaded with gimmicks. Construction is rock solid. 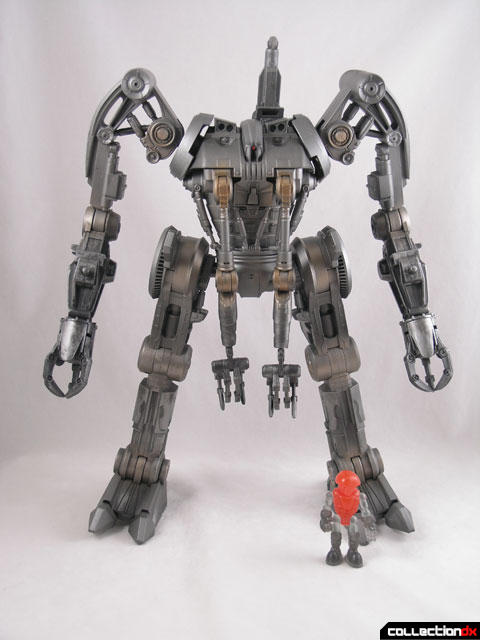 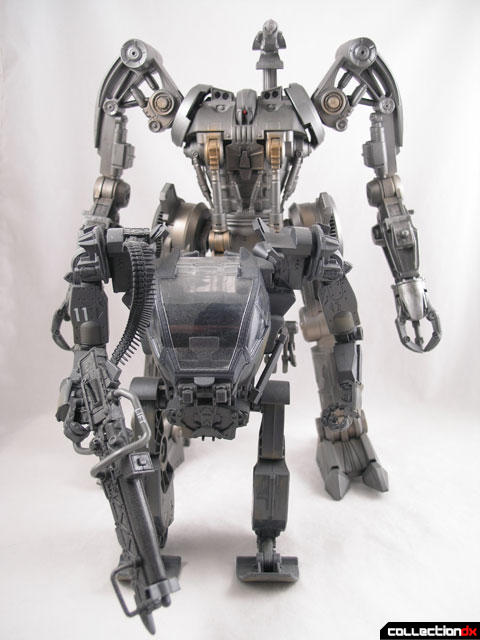 Articulation is great, with a few awkward points. Each shoulder can rotate and rasie and lower with clicky solid joints. The arms bend at the elbows, but there is no swivel joint. 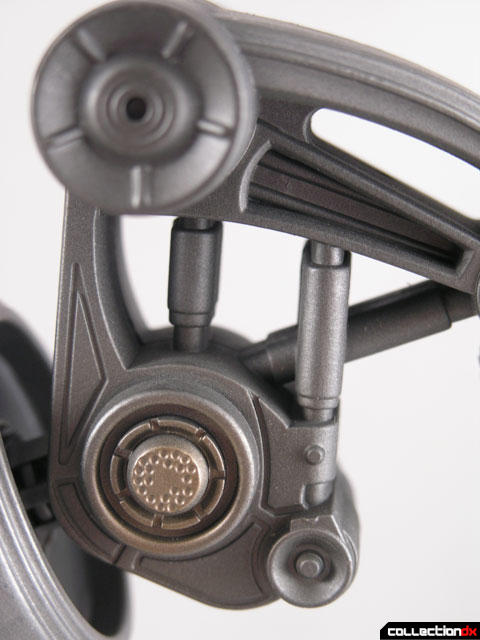 At the end of each arm is a claw with spring loaded fingers. Press a button to open them, and the tension in the claws will hold onto most anything. The claws also turn freely. 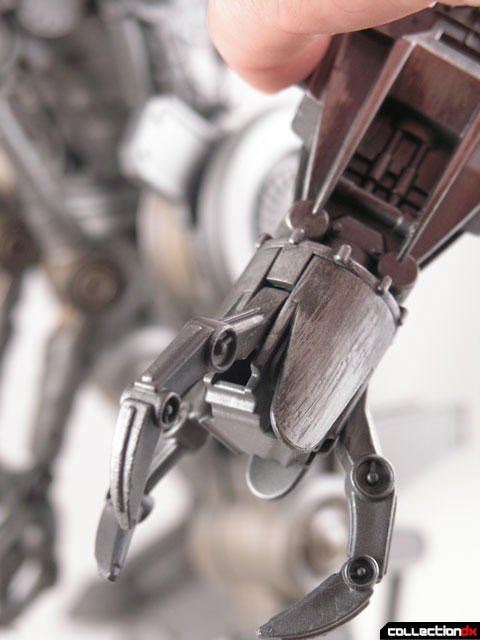 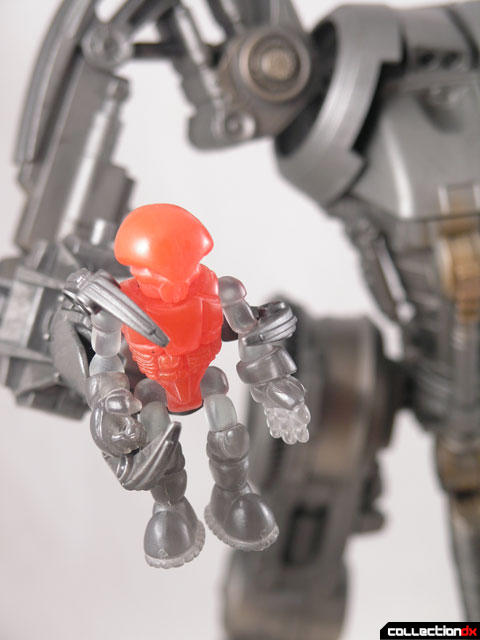 Press the head down and a missile launcher springs up from the back. Press the button on top of the launcher and the missile fires off. 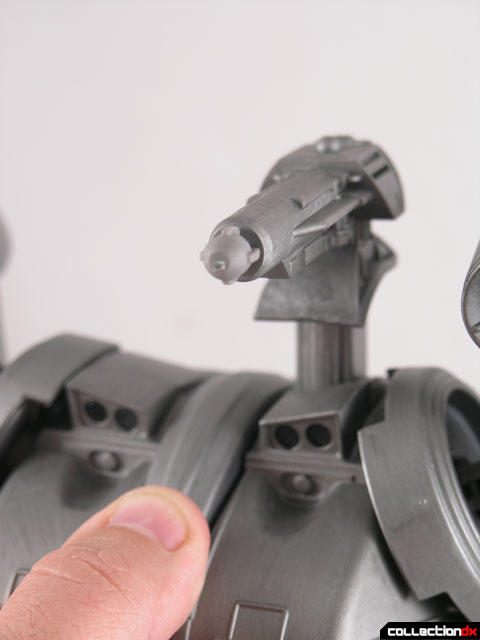 Below the head, press another panel and the search lights on either side of the head light up. 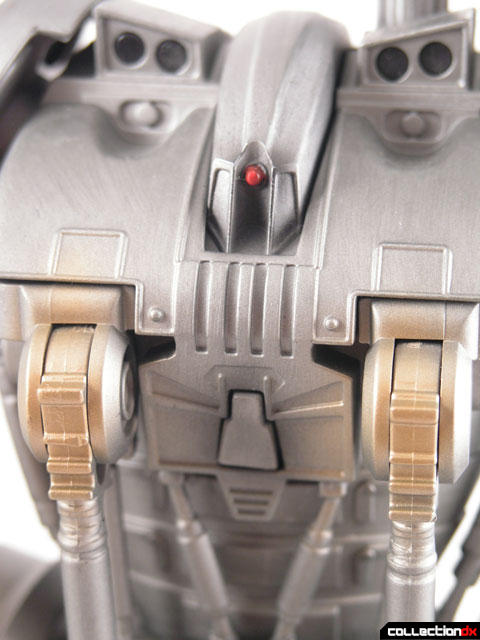 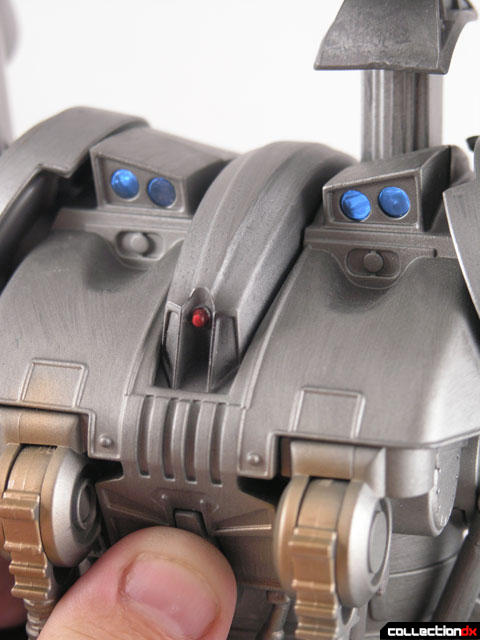 Also on the chest are two articulated arms that end with moveable claws. These arms are jointed at the chest, elbows, and wrists, and they swivel in two places each. 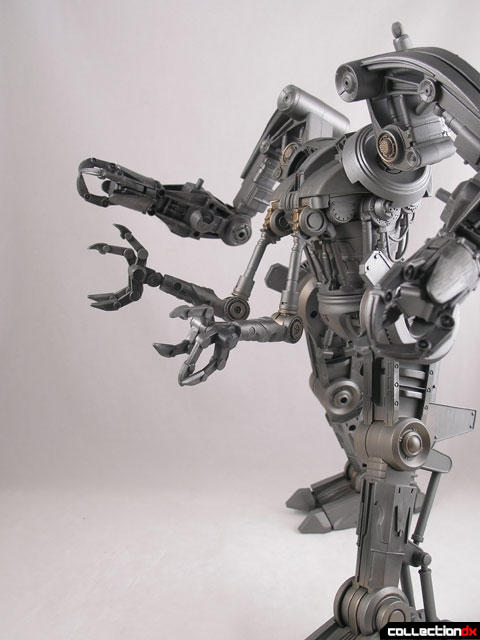 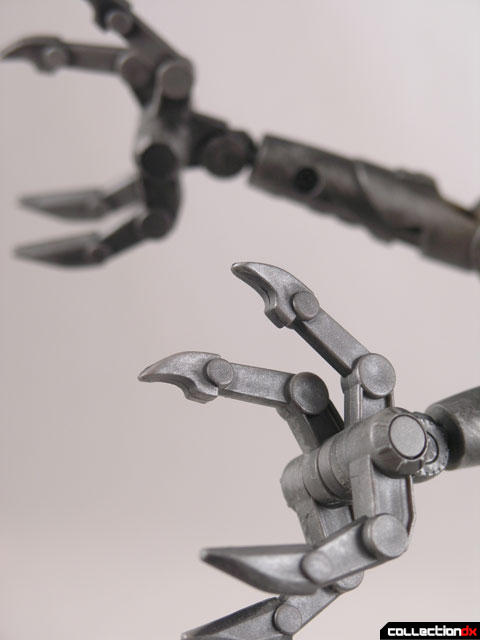 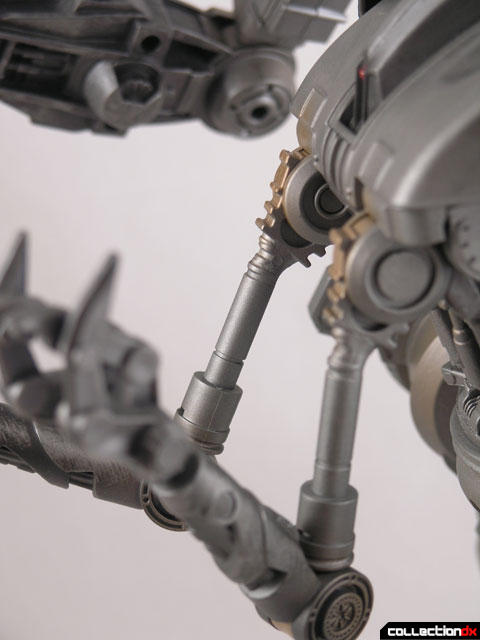 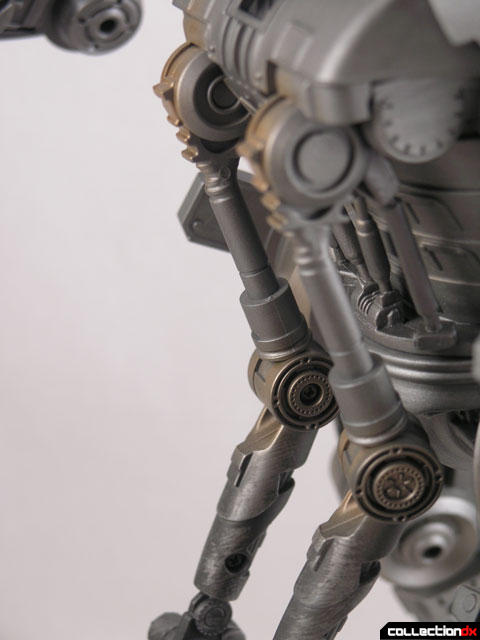 The Harvester swivels at the waist, and each leg has a fantastic two way clicky joint. 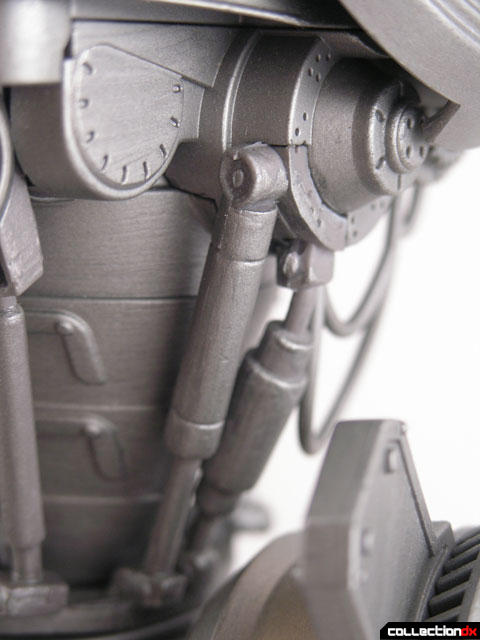 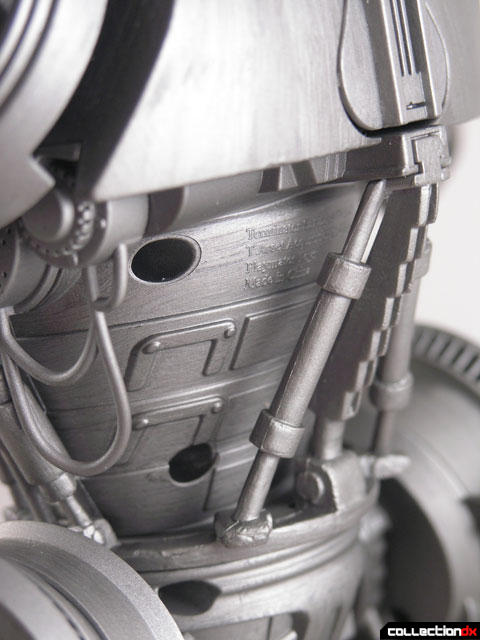 The legs are an odd subject. They are supposed to bend backwards at the knees but honestly, it just looks so much better with the legs bent normally. Unfortunately the knees are designed with limited "proper" joint movement and a wide range in the wrong direction. What does this mean? It means he can fall over easily if you try to pose him in the pose shown here. 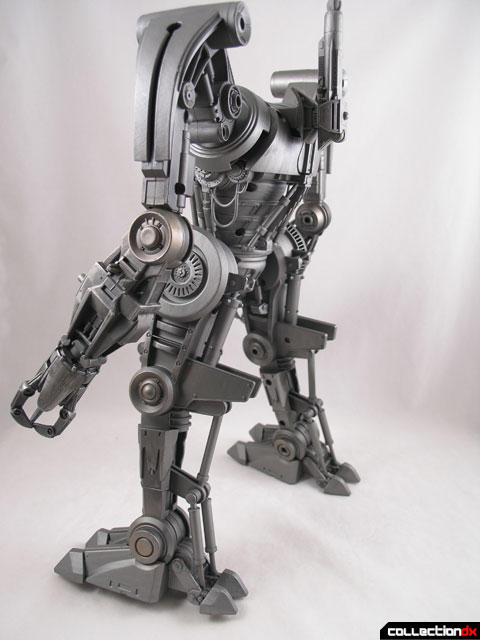 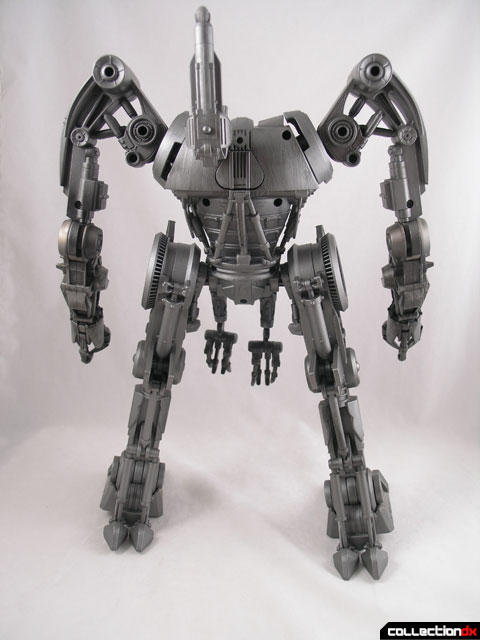 The feet are great, with working pistons on the backs. 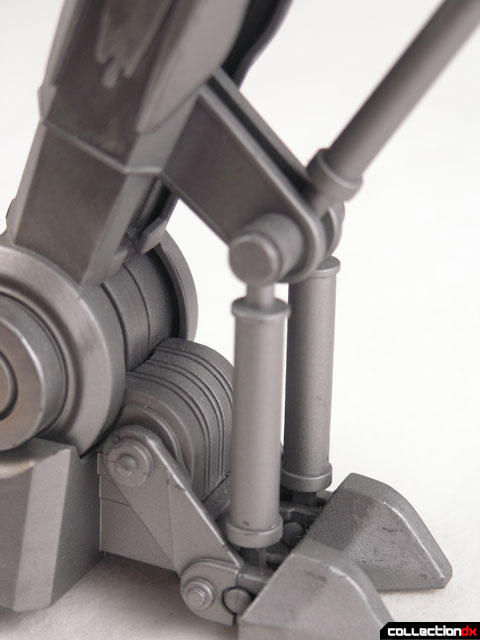 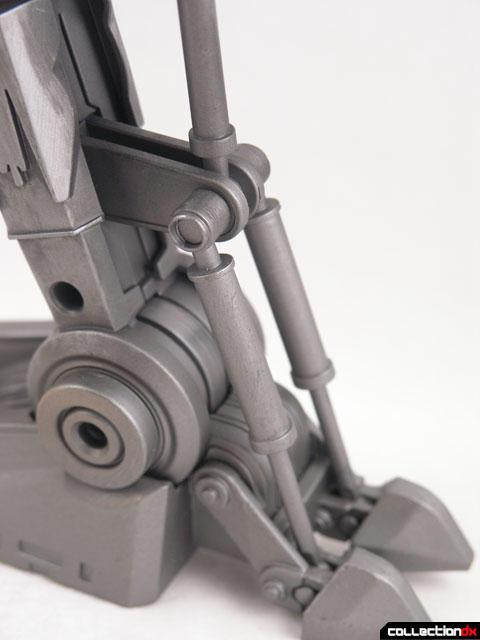 This thing has presence. It is simply a great toy. It's the rare thing that transcends the property it comes from and stands on its own merit. 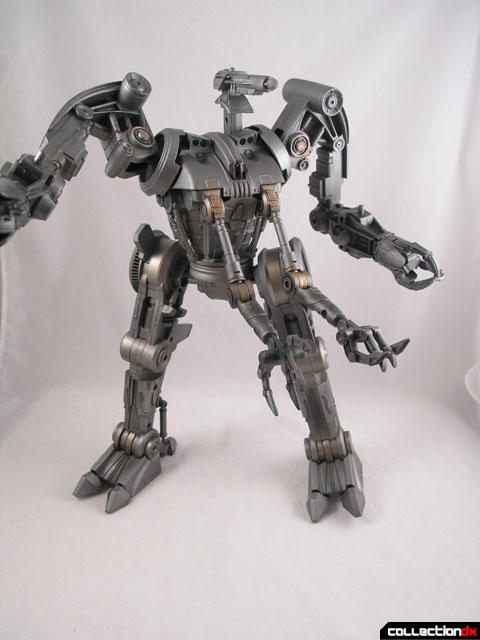 If you see one, do not hesitate, grab it.

4 comments posted
AWWW! What the heck? I

AWWW! What the heck? I didn't know this came out! I remember seeing and ignoring most of this toyline, but thinking to myself: "if they come out with a harvester, I may get it." But I never saw that thing! How the heck did that pass me up?

Aw dangit, now I'm gona have to hunt that sucker down...

Hunt it down? don't you mean travel back in time to when it was first built then "tarminaaaaaaaate it" oh don't your bike and sunglasses. hehe

What are you, CRAZY?!

....course I'm not gona forget my bike and sunglasses. GEEZE.

I would like to use this machine to go back in time and destroy an entire village of Saint Seiya figures. Does this make me a bad guy?