Hello fellow readers of Anime CollectionDX. This is this will be my first review for the site (I did a review of SOC SPEC L-Gaim on the regular CollectionDX site).

Haruhi Suzumiya is the first revoltech release by Kaiyodo from the hugely popular anime "The Melancholy of Haruhi Suzumiya" (which was derived from novels and even had two different manga adaptations). Actually, the first Haruhi figure they did would be the one the Haruhi Suzumiya figure in winter school uniform but that was an exclusive that came with the Haruhi dancing game for the Nintendo Wii. This figure is under Kayodo’s Revoltech Fraulein (German for “young lady) line of articulated female character figures. 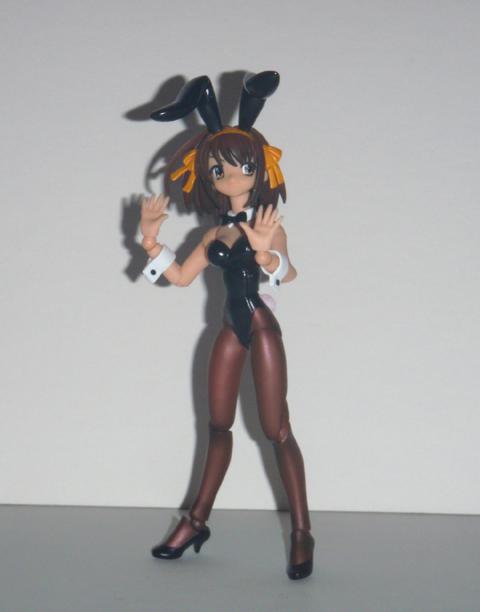 The figure is Haruhi depicted from episode “Live Alive” in which during the school festival the singer/ guitarist having lost her voice when she was supposed to go on stage, Haruhi goes up instead while wearing a bunny suit (much to the shock of Kyon). From there, she sings “God Knows” which quickly impresses the crowd.

The figure stands at six inches (not including those rabbit ears). It is quite articulated using Revoltech joints in the shoulders, wrists, torso, head, hips and feet. The biceps, elbows, thighs and knees are standard hinged and swivel joints. 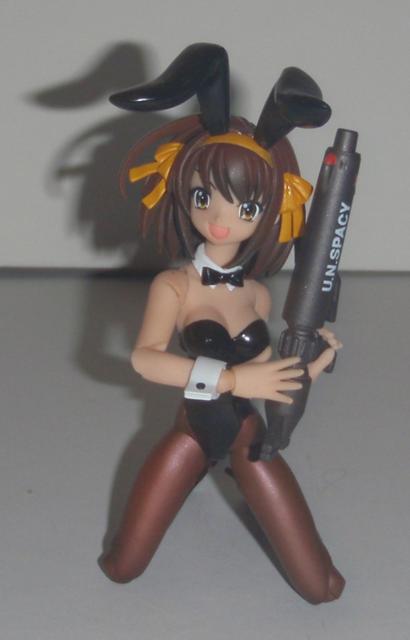 She comes with a multitude of accessories. They include fourteen hands (yes, that many although one pair has their own hinged joints and doesn’t use the revoltech joint in the wrists), three faces (normal closed mouth, open mouth happy and close eyed open mouth as if she was singing loudly), an electric guitar, a sign for her “S.O.S. Dan” club and a stand. 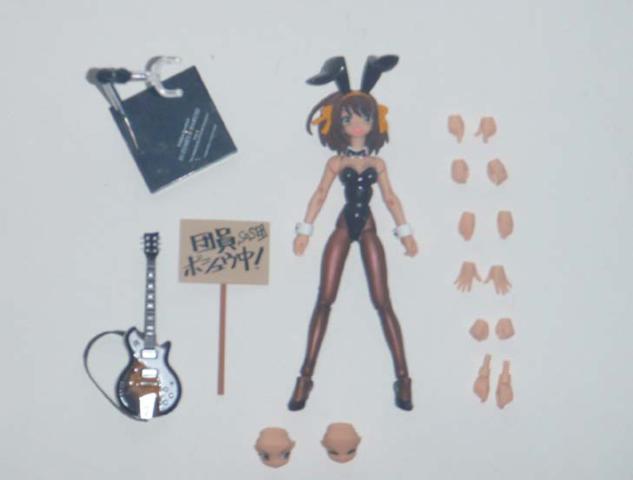 To change the expression, you first have to removed both the back part of the hair and the bands. Then you have to actually pull out the entire head to change it with another. This proves to be a bit more troublesome as it also kinda dismantles the little Revoltech joint in the neck so I suggest you take it slow and hold that joint while you wiggle to pull off the head. I wouldn’t change heads often if I were you but I don’t think there’s a danger of breaking the joint as long as you’re careful. 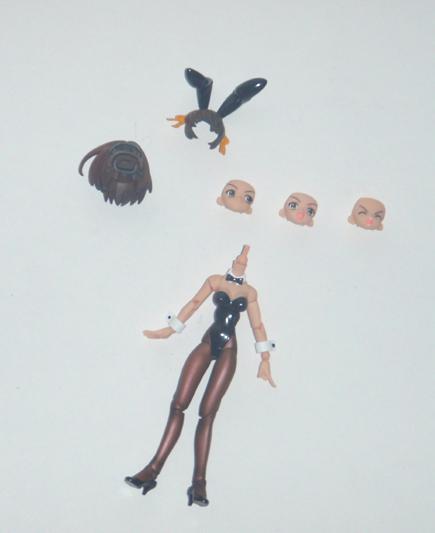 Articulation is quite good. She is able to bend in all the major joints. I wish the knees were able bend a little more (maybe in the future, the Fraulein line will have those double Revoltech joints like in the newer Evangelion figures I hope). Due to her lanky nature, the figure’s hips are kind of wobbly. The waist is very narrow. There’s two Revoltech joints there. One is on the upper part, the other is in the lower abdomen (but because the stomach is all one piece, you can’t separate that part). 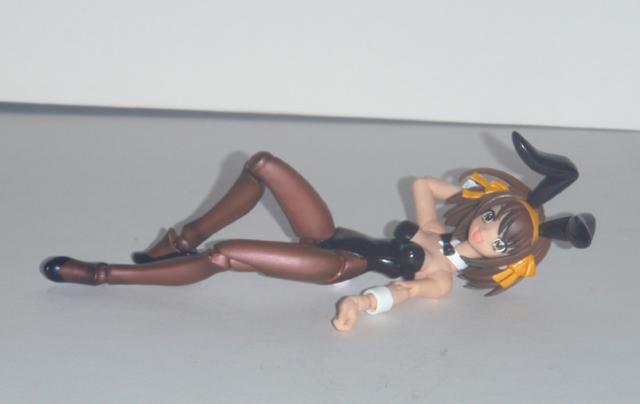 The stand it comes with well, it could have been better. It’s the type of stand that wraps around the waist. You have to have it high up on her torso to get a snug fit. I really wish that the stand had pegs (and peg holes for the feet). The regular Revoltech releases have this so why not the Fraulein? 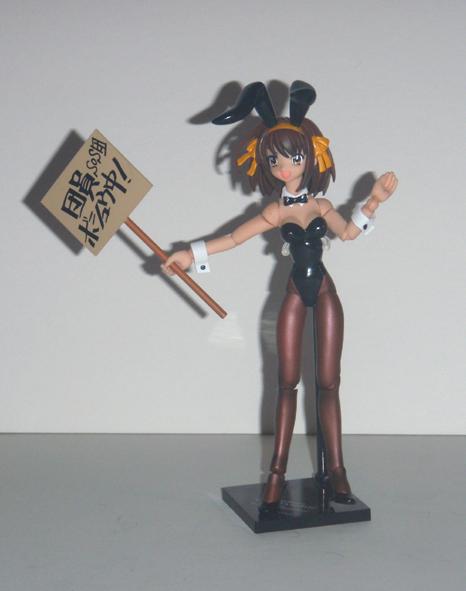 I’m not entirely sure what the signs reads other than it being about the S.O.S Dan club (probably to have others in the school join it). It fits in the fists designed for it but what’s great is you can also fit a spare MSIA beam saber (I must have a hundred of these). 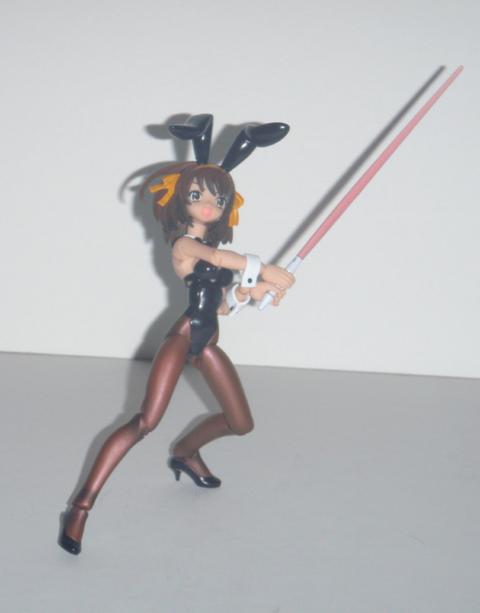 The real draw, accessory wise, is the electric guitar. First take off the head to wrap the strap around her. Put in her right hand that has the guitar pick. The left should have the open hand designed to grasp the “neck” of the guitar. 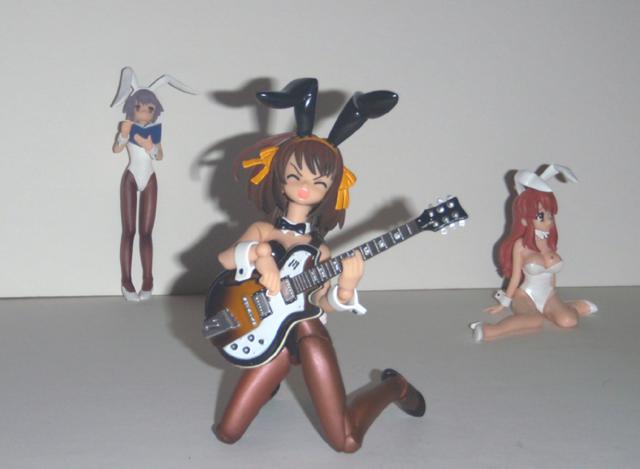 Having open hands is great for making her hold other Revoltech (or any figures for that matter) accessories. 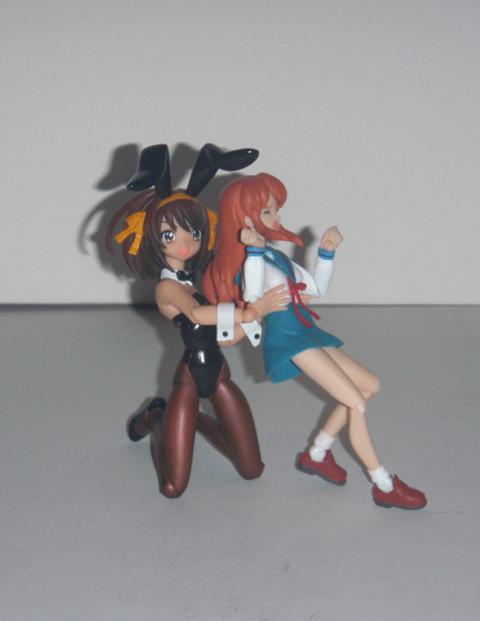 If you’re wondering is this in scale with the figma Haruhi Suzumiya line the answer is no. The Fraulein is much bigger by about an inch. It’s up to you really which line you want to collect. Although the figma’s are tighter in their joints, I fear for the joints breaking if handled too rough. The Revoltech is sturdier and I don’t have to worry about the wrists breaking like on the figma (although if you make the hole a bit bigger on those, that isn’t much of an issue). Also pics I’ve seen of the figma’s shoulder joint breaking scare me, although thankfully that hasn’t happened to any of my figmas yet. 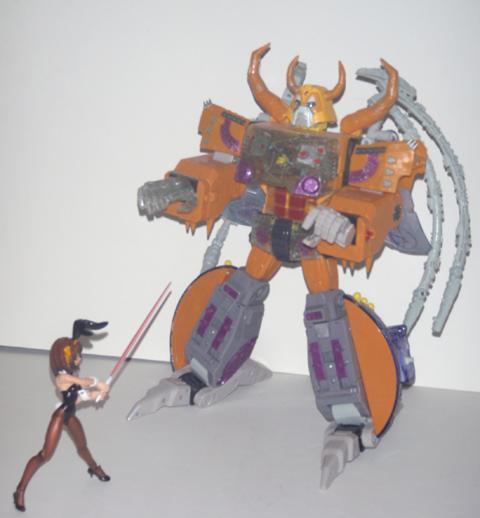 Overall I think that this is a nice figure. This is my first foray into the Fraulein line and it doesn’t disappoint even though it has a couple of flaws like the slight floppiness and that the stand should have had a foot peg.