Rex drives Machine #3, also known as the Granite Grinder- a small vehicle with caterpillar tractor treads. It features a single large twin-pronged hydraulic jackhammer, which vibrates back-and-forth quickly to break up boulders that may have slipped past some of the Power Miners’ larger drills. It can also move for extended times away from the main mining teams along with the Stone Chopper and Mine Mech thanks to its natural gas tank and larger hydraulic fluid cache, leading the charge with its large removable spotlight to shine the way. A pack of dynamite blasts apart rocks that the machine punches through. Then the fragments can be collected by the Mine Mech and placed in the Granite Grinder’s towed rock sled for analysis back with the main team by Brains. It is fortunate that Rex designed the Granite Grinder to be durable and compact because it means when he’s driving it, he can avoid serious damage from rock monsters and the boulder that they hurl at him! 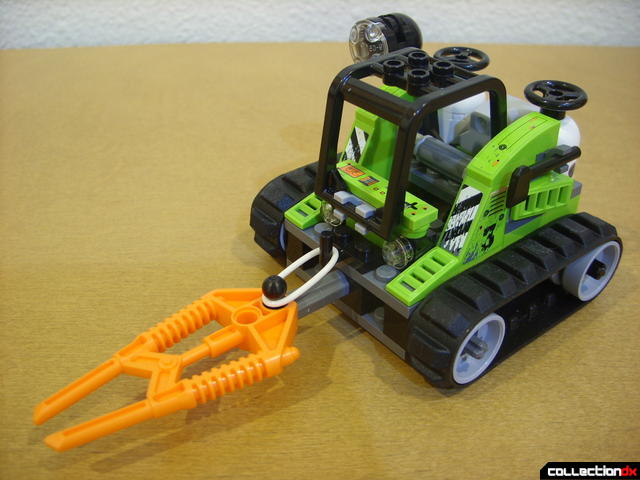 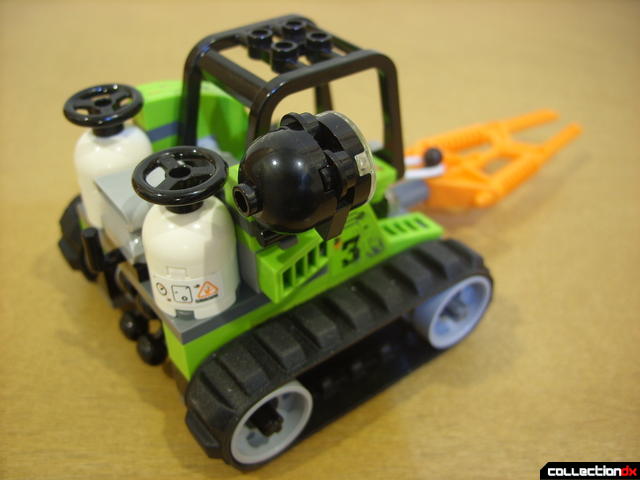 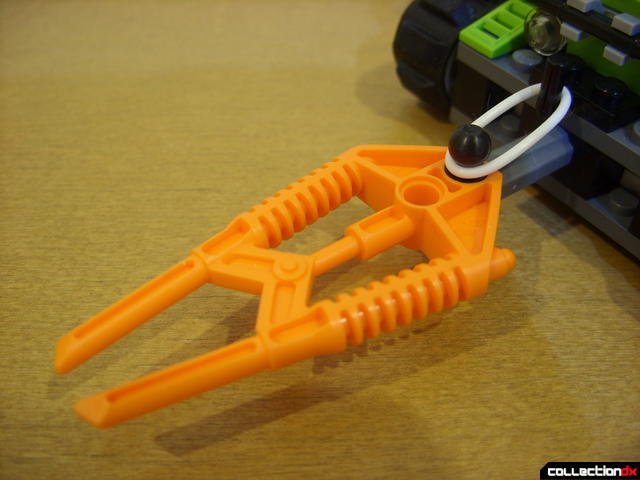 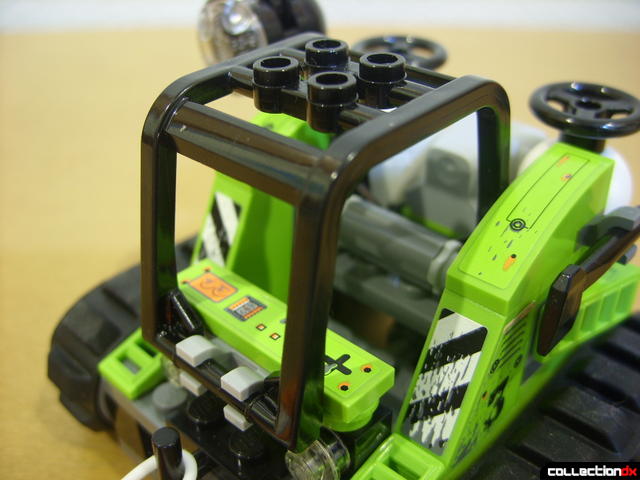 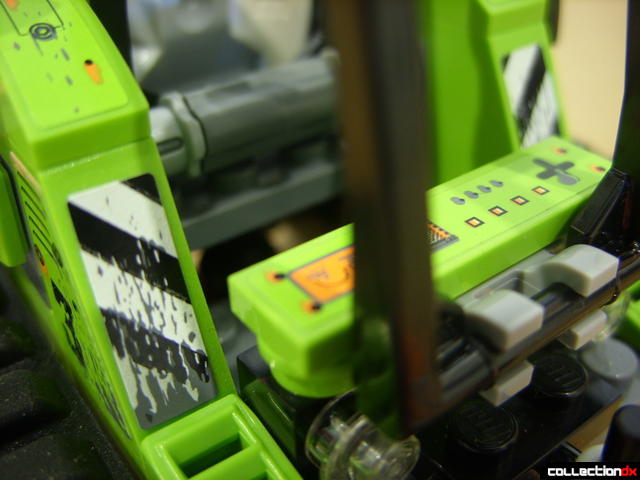 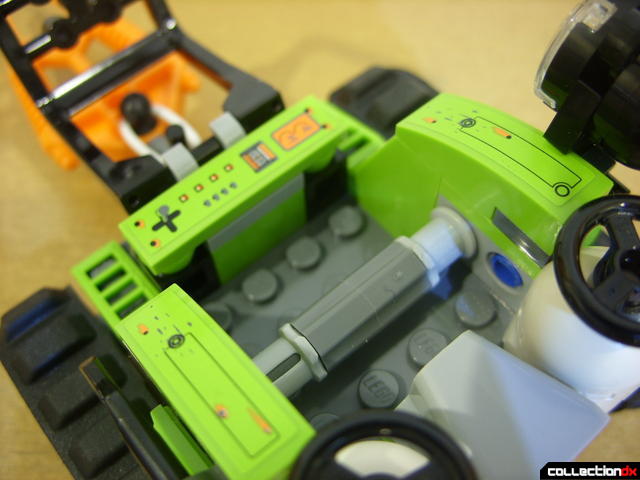 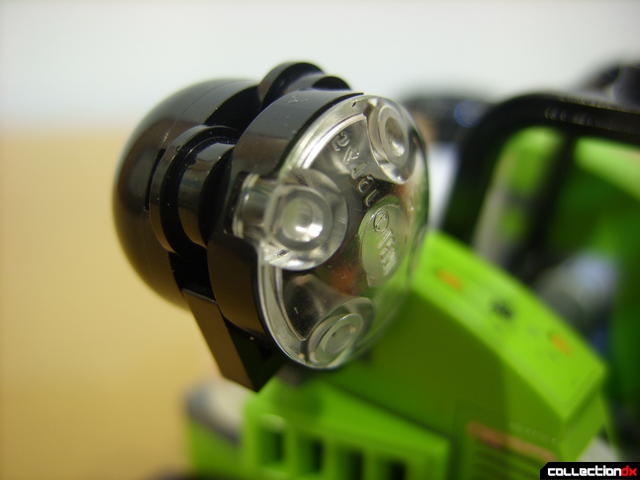 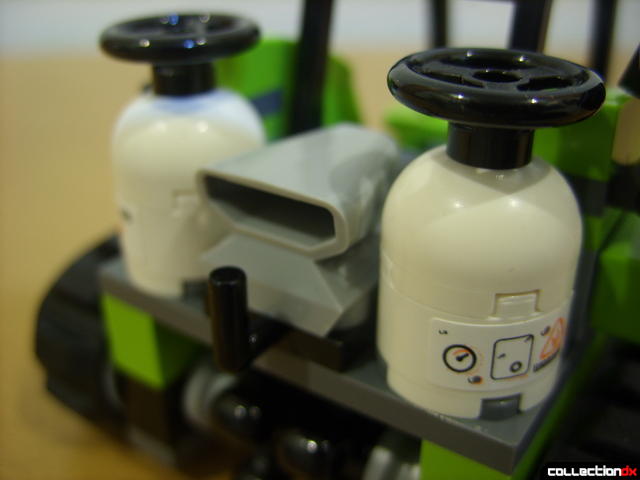 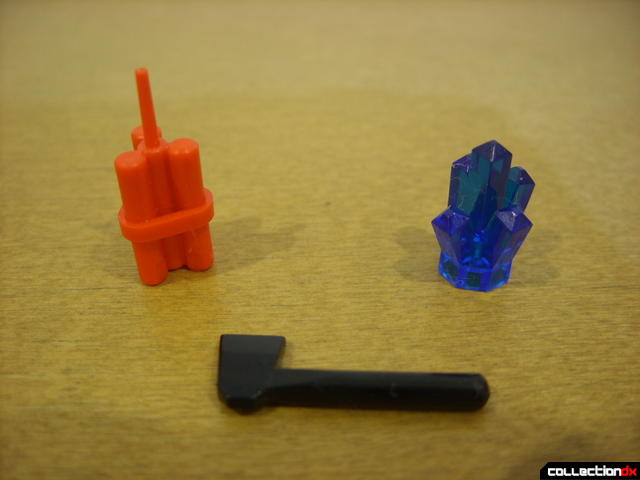 The rubber tractor treads are tied together by a Technic rod, and cannot twist independently of each other. 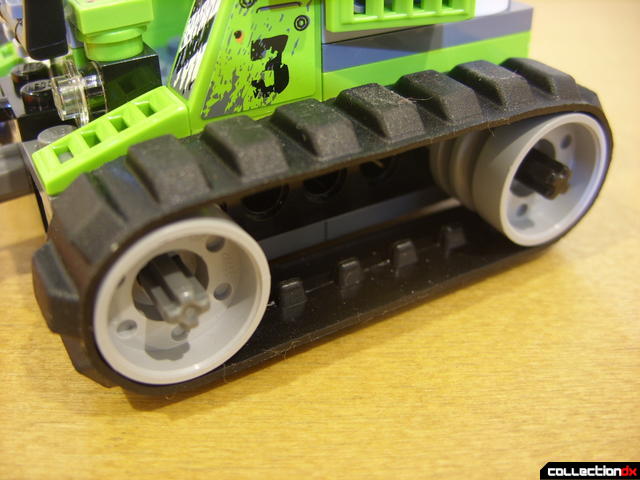 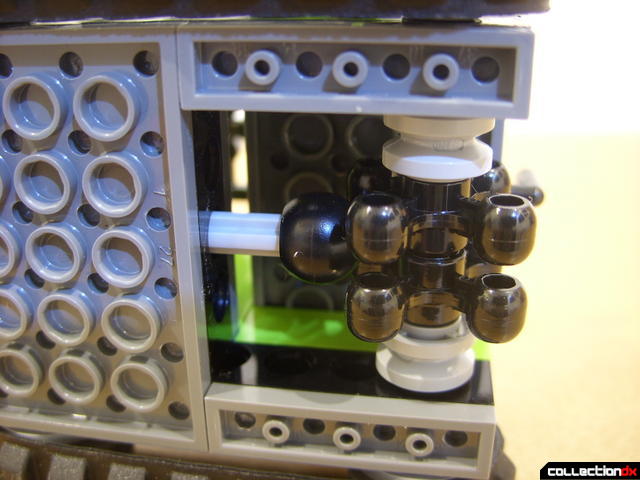 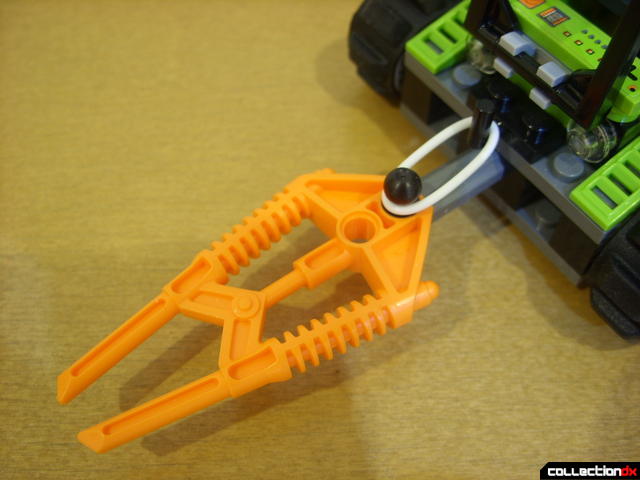 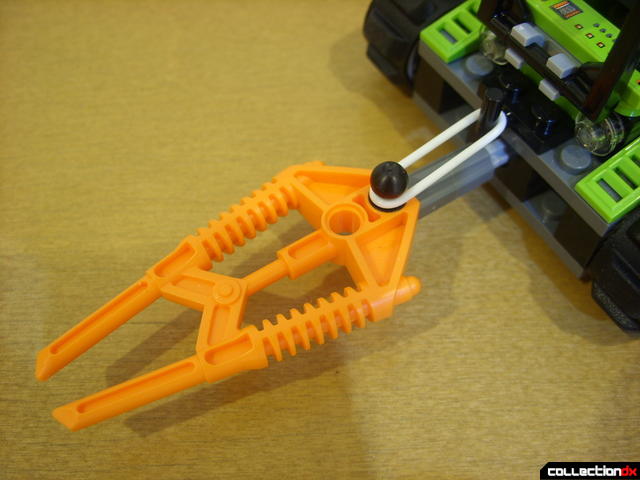 The two tanks in back can be removed. 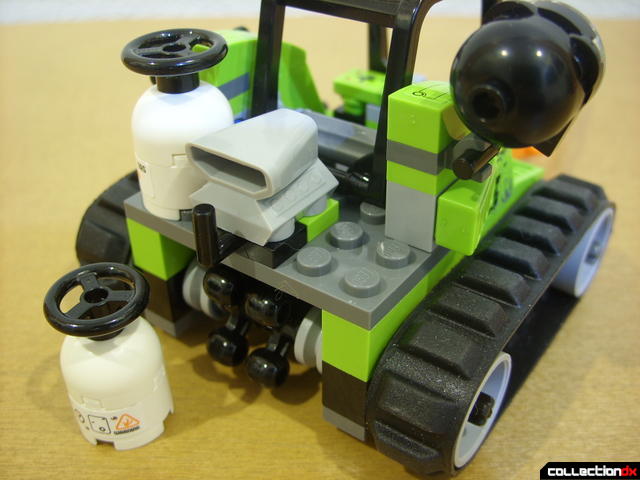 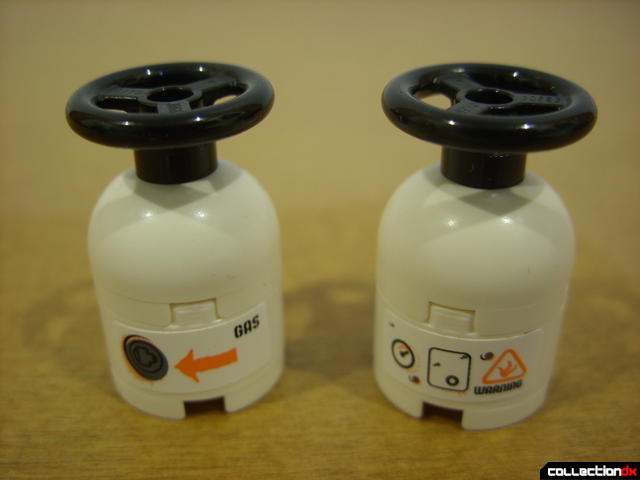 The rock sled’s plastic chain can be hooked onto the back, and dragged along behind it. 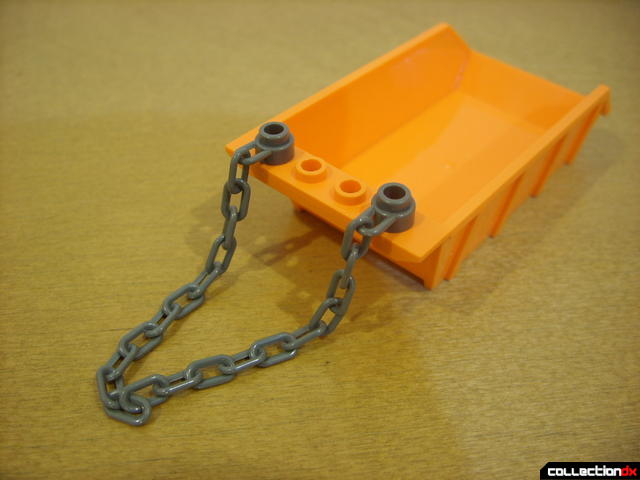 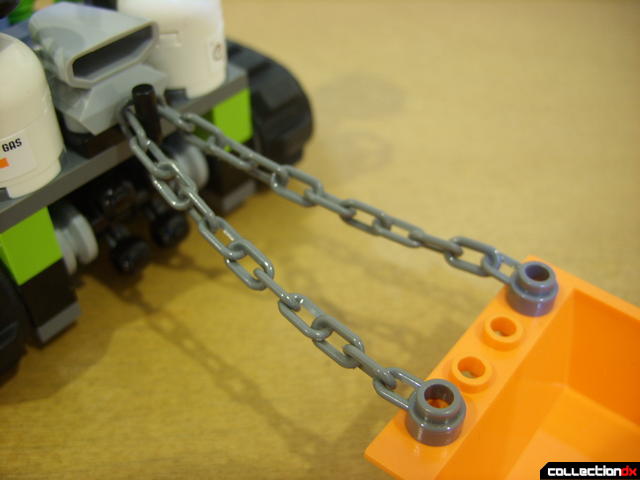 LEGO Set #8958 comes with the first version of the Rex minifig. The back of his helmet hides his second facial expressions- a look of surprise; (His helmet is capable of accepting a fold-down visor, but this set does not come with one.) 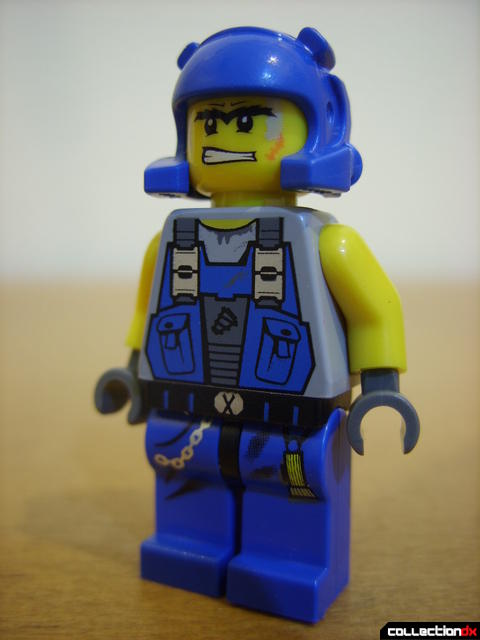 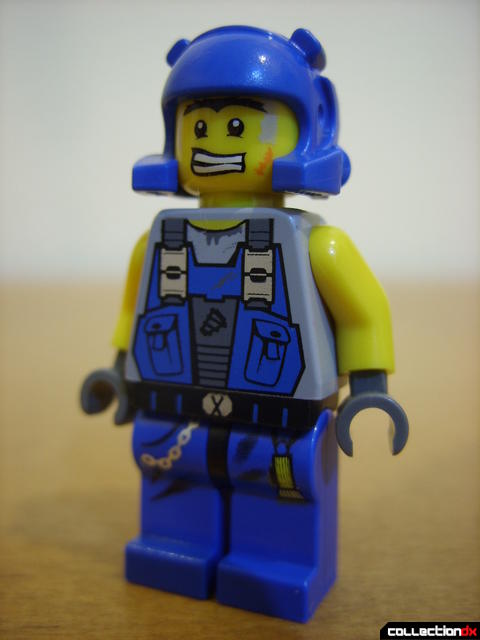 -with three larger unique ones appearing in separate sets [that have been released so far]. They all have larger bodies and arms. 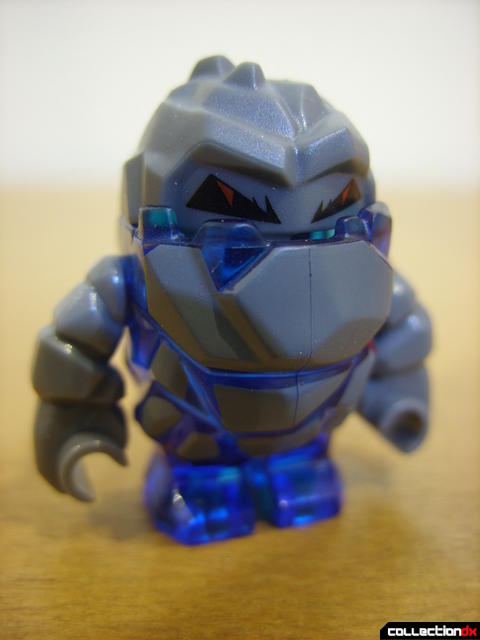 LEGO Set #8958 comes with a single Glaciator rock monster minifig. His arms can swivel at the shoulders, and his hands can accept any minifig accessory. His head can be hinged upwards, and one power crystal can be placed inside! 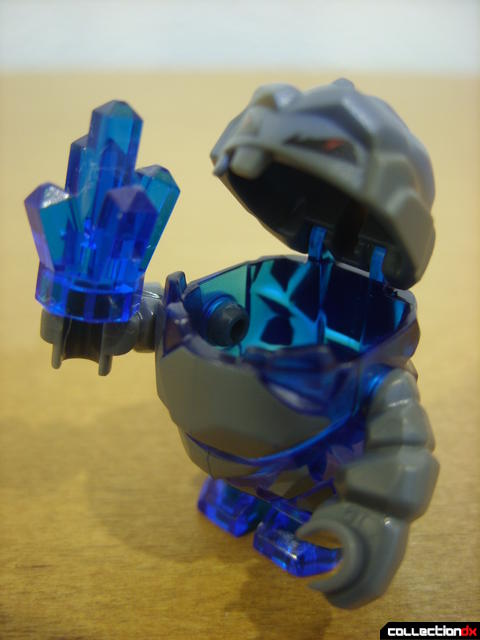 Wow- LEGO’s third attempt at a fictitious underground/mining theme… just that now they have dedicated characters rather than generic minifigs. And a collecting gimmick in the form of multi-colored monsters. And it takes place on Earth rather than on an alien planet on the other side of a wormhole in another galaxy. I digress… I stand by my position that small LEGO sets offer up just as much fun as the larger ones. This one has a single feature, if you don’t include the retractable roll cage. It rolls around easily on any flat surface, but it isn’t that bad an issue that the tractor treads don’t swivel independently of each other. That the tanks have an internal support so that you can remove them is also nice. Really, the only part that I kinda scratched my head on was the rock sled. While the chain was nice, why not put some wheels on it so that it doesn’t actually drag on the ground collecting lint and dust and getting scratches on it? Great, detailed little set. It reminds me of one of those small commercial-grade excavators you see sometimes. The Granite Grinder is a win in my book. Highly recommended! 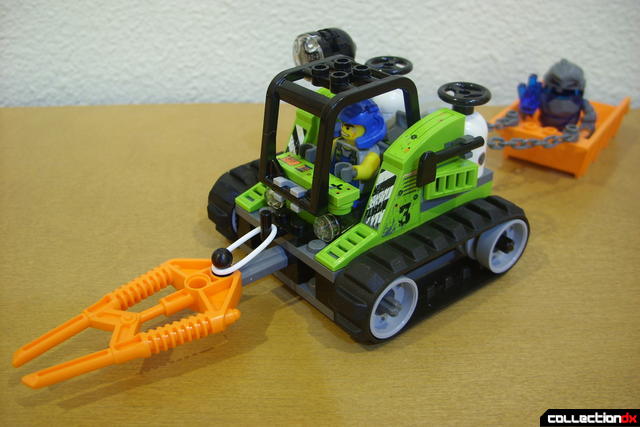