Golgo 13 is as much an icon in Japan as Doraemon, Gundam or Yamato. He's been around for a long, long time, and has appeared in various media such as manga, anime and film.

He first appeared in a Manga in 1969 and is the longest running adult manga in Japan. He's a hitman for hire - he's a total badass and a total mystery. He's been around so long that his visage has moved beyond the realm of otaku and can be seen in commercials and other common goods. Hell, there's even a Golgo 13 pachislot machine.

Golgo 13 is kind of a big deal, but is hardly known outside of Japan. Sure, we got some anime and manga, but it never broke out into the mainstream. I guess you would have had to have been there. 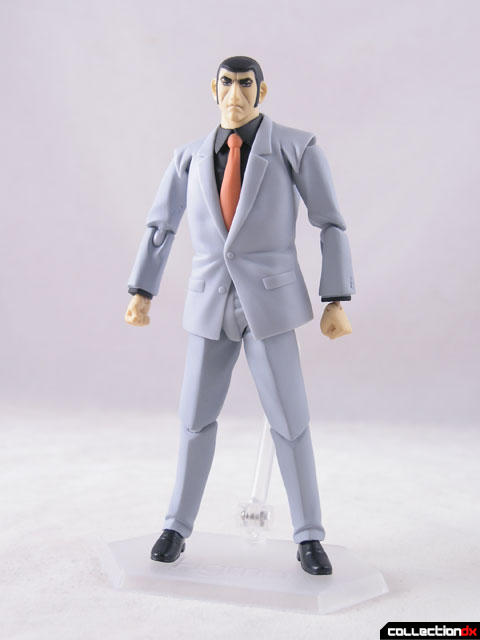 Golgo looks like he stepped right out of the comic. I am glad to see Figma doing something different. This bad boy is very cool. 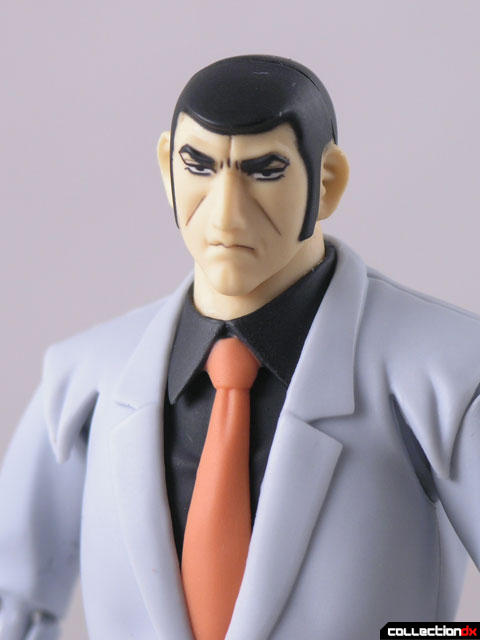 The box is your typical window box, with a few plastic trays inside. The tray supports Golgo and some of his accessories, but behind that, there is a cardboard separator, and then the parts for the di:stage. Before we get to the stage, we'll talk about the figure.

Golgo comes with an assortment of weaponry, hands, gimmicks and a stand. 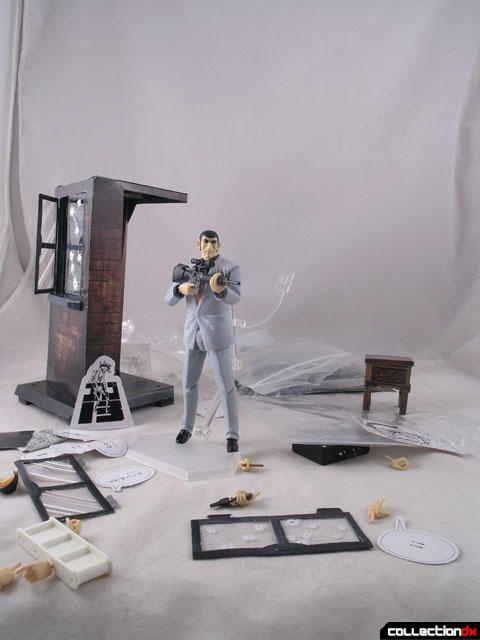 The figure is highly articulate, and looks fantastic in most poses. The nature of the suit allows for a wide variety of poses. The jacket, shirt and tie are all separate pieces, creating a multi-layered effect. 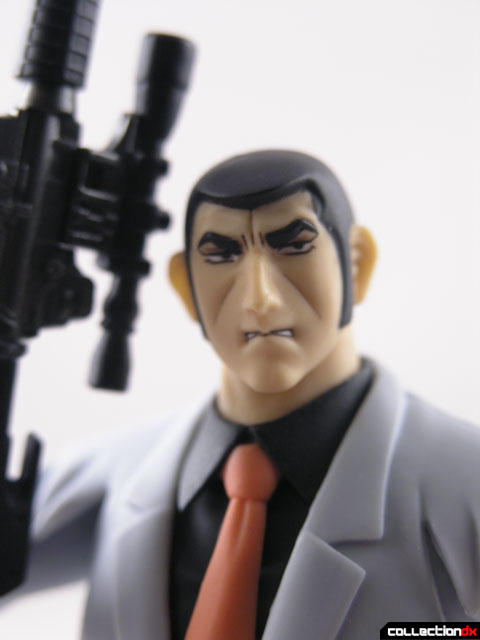 Most of the joints are ball joints, and posing is not hard, but the stand helps if you want to get a little more dynamic. Each hand is stored on the signature Figma hand storage unit, a block of plastic with slots for the hands. Unfortunately, some of the holes are too big, and the hands fall right out. The hands can swap out easily, and some of the hands have special purposes.

For example - the cigar smokin' hand. The cigar is a separate accessory that can be inserted into the hand. 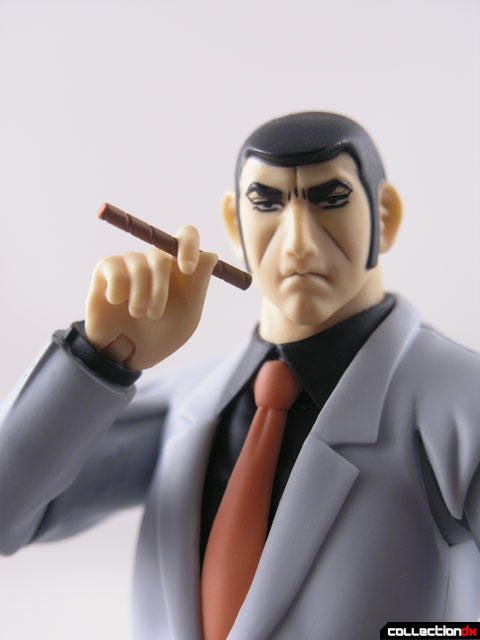 Several of the hands are designed to hold Golgo 13's weaponry. The right angled wrist is for when Golgo has his M-16 out and lined up for a sniper shot. The left open hand is to support the barrel. The other gun holding hand is for the pistol. Golgo 13's main weapon is a customized M16 rifle. The rifle can disassemble into four separate pieces - Barrel, scope, body and buttstock. The connections between these pieces can range from solid to tenuous. Be careful with the buttstock, if you bend it it will snap right off (mine did). The pistol is a standard 38 caliber revolver. Another accessory is the briefcase. this case can open to reveal two padded compartments that store the components of the rifle. The set also comes with papercraft inserts that lay over the compartments to make it look as if the suitcase is full of money. The papercraft parts come in sheets that you have to punch out and fold. These include accessories, word balloons, and the parts for the diorama.

For the word baloons, Max Factory did a neat thing and created a clear holder that snaps onto the Figma stand. On this holder, you can place random things such as word balloons. Unfortunately, the clip here is not tight, so you have to wedge something in behind whatever you put in here to keep it from falling out. This now brings me to the di:stage.

When I ordered this, I thought the di:stage was the whole thing - base, walls, ceiling, and maybe it came in panels that you snapped together. Wrong. The di:stage is the square base with all the little connection parts. The rest of the diorama is made out of paper. I had to put this thing together. It took me hours, and pissed me off to no end. I wanted a toy, not a craft project. But no, I had to steal one of my kids glue sticks and build furniture. Not happy. And since I don't read Japanese, I had no idea how the thing worked with di:stage, and as such, had no idea what I was talking about on the video. I now know that the small connector parts that come with the stage help anchor this, or any other, backdrop you use with the di:stage system. But once I got it all figured out, I have to admit, it looked cool. It comes with a little table, and even your choice of broken or unbroken windows. A backdrop is also provided so you can have something behind the base. It is also worth noting that the standard Figma stand can plug into the di:stage as well. Golgo 13, is a great little figure, and it is nice to finally have a version of this iconic character in my collection. The diorama is a pain, but the figure is great. You can get your Golgo 13 Figma at Anime-Export.com

Compare this to the Avatar-Col. Miles Quaritch sculpt, and you understand my disdain for Mattel's latest 3-3/4" offerings. (Granted there is the price difference.)

I see myself getting this one. A++

While I can see the frustration in an unexpected papercraft project, the end result looks really great, and is a great idea as to how to provide some affordable scenery with a toy.

Golgo 13! Thanks for the review, Love this guy, First ran into him when I played the NES game, glad this figure is out there. I keep sidetracking this purchase but hopefully not much longer

I remember the movie, "Golgo 13: The Professional", from WAAAAAY back. In fact, it may have been the first time I saw animated boobs! Heh...how far we've come... :P

Anyway, I just cannot get into this figure. The head sculpt is killing me. Dude looks like Curious George. Granted, I've never read the comic, but I sure don't remember the gimungous simian ears from the movie. Coupled with that low brow and damn...totally chimpanzee!

And I suppose you do like the Avatar-Col. Miles Quaritch head sculpt??? lol

Heh...certainly not! But then again, this retails for about $40USD!! That's four time more than that Avatar crap. Now, granted, this toy is *easily* MORE than four times better, but I hold Japanese toys to a higher standard of quality (and price!) anyway. ;)

I love this figure so much. After all of the different moe figures that the line has covered, I feel that they've given props where props are due. I really want to play the old NES game again because of it.

Is the woman under the sheet in the background. Now that's detail.

I'm disappointed that it doesn't come with a horrendously-rendered 3D helicopter accessory. Maybe it'll be a con exclusive?

It's funny how in America,the licensed video game adaptation of this show is a million times more popular than the show itself.

I'm kind of torn on the base. On one hand,I have a strong desire to call any paper action figure accesories B.S. just on principle. On the other hand,it looks insanely awesome when it's all set up.

As long as it's a high enough quality paper-card and well printed (like this one looks to be), I don't see what the difference is between a paper DIY backdrop and one made of printed plastic flats... other than what the price difference would be. It seems like a great way to throw in a pretty dramatic added bonus to the figure without increasing the price probably at all... if it had an elaborate plastic backdrop with it, it'd cost an extra twenty bucks and people would Baaaawww to no end that they didn't want to pay for it.

You don't see what the difference is between plastic accessories and paper ones?!?!?
I could make a paper diorama myself,using photoshop,or even just old fashioned markers and sharpies!

Well yeah but, they probably wouldn't look as good. I meant as a pack-in with the figure. You could totally release stand-alone diorama bases, or the really elaborate pack-in dio bases on some of the early Marvel Legends figures, but that raises the cost. The paper backdrop here looks really good... not even just serviceable, but good, and at probably almost negligible cost to include.