Nope...you can't. With the way the series was going, however, you knew that there was going to be some gimmic involving the ultimate forms. In episode 20, you finally catch a glimpse of the "Final Kamen Terminal K-Touch" and it's involvement in granting Decade his "Complete Form." One thing led to another (I'm a sucker for DX henshin toys, even if the series wasn't the greatest) and today I would like to share a look at Bandai's "Final Kamen Terminal DX K-Touch."

In the package, you get the "DX K-touch", a belt clip and 2 cards. 2 AAA batteries are required and are not included. 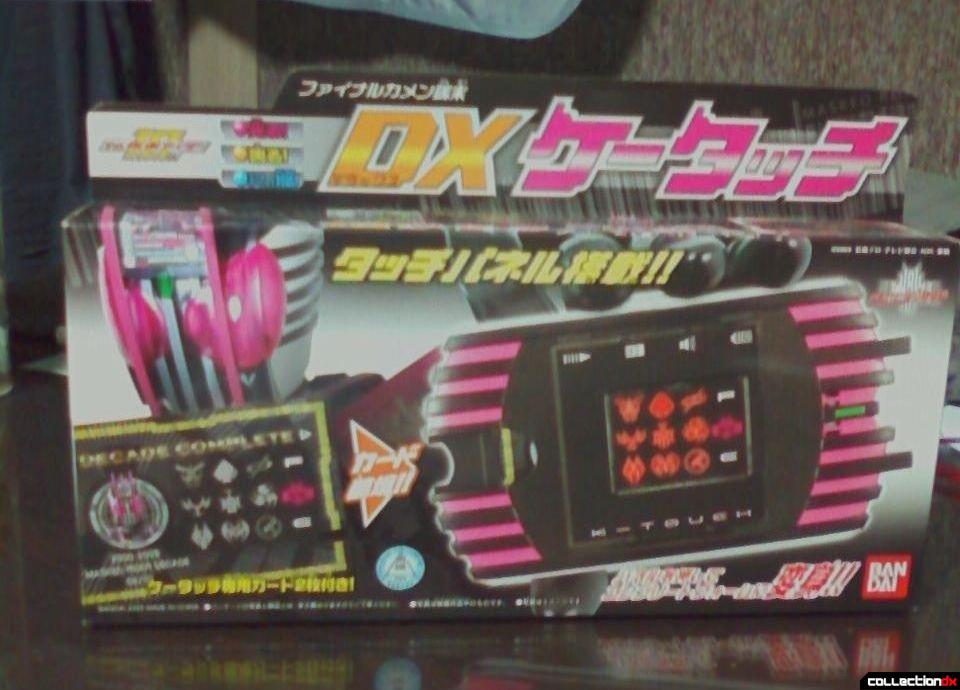 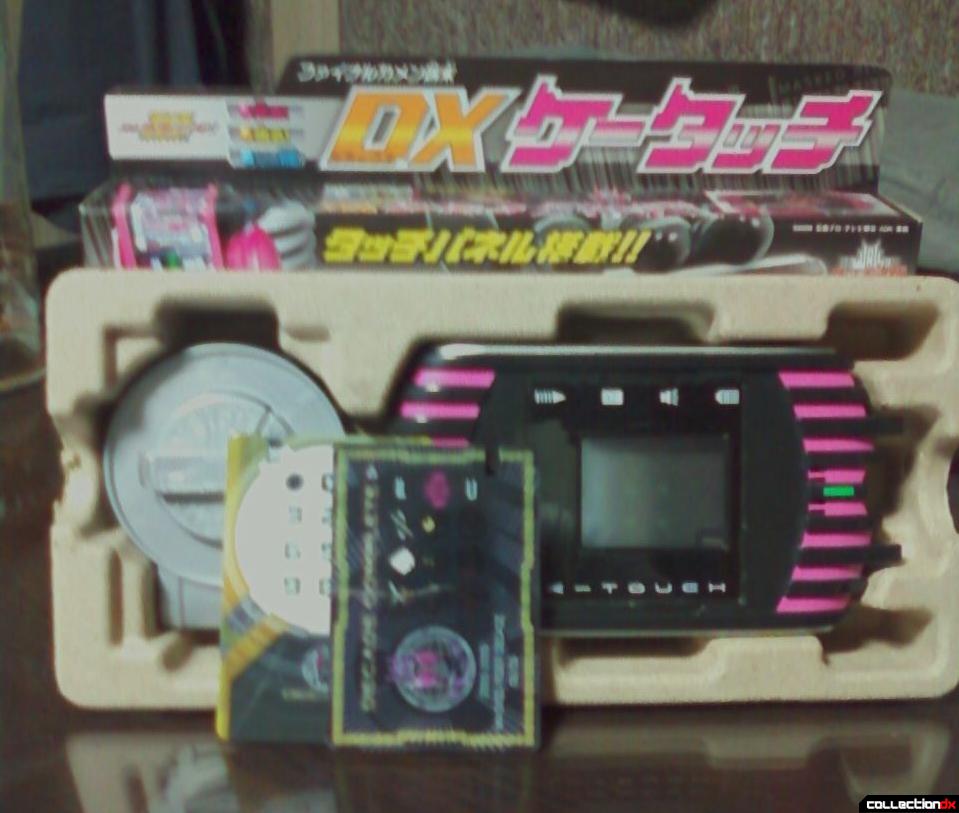 First, the K-touch. From the printed markings, I'm guessing this was supposed to be a touch-screen phone of some sort. The "Decade" influence is obvious with it's resemblance to his helmet and the faux green LED next to the speaker. Except for the power switch on the button and a transparent release button on the top, there are no other visible external buttons or toggles - the clear window in the center commands all the attention.

Power it up and a 3x3 grid of LEDs light up and you are greeted to a tune that resembles the start-up jingle of a Macintosh. It's very relaxing. On the screen are 12 "buttons", that is 12 spots where unique contact is detected. Pressing or holding any of these will result in an audible "click" and one of 13 lightshows. The exception is the button in the lower right hand corner, which will always function the same way, whether either card is inserted and even when there is no card inserted. This is essentially a 2 stage volume switch and holding this button will play the start up tune again, but at a lower volume. From this point on, all sound effects will be played at the lower volume until you use the switch again or you restart the k-touch. 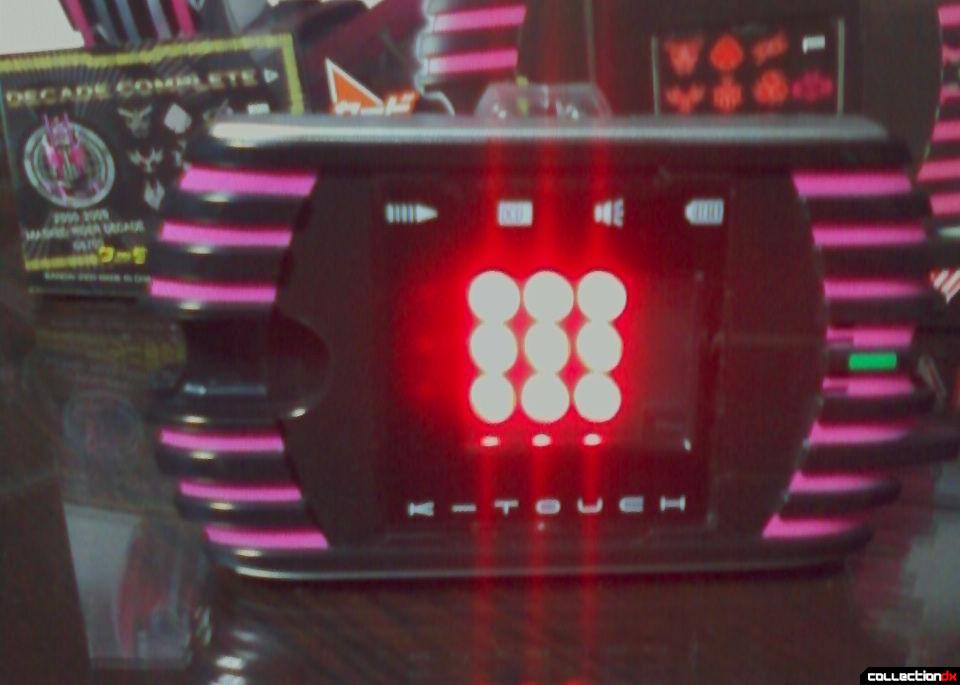 The belt clip lets you attach the Decadriver and use it's functions by pushing on it, rather than rotating it in the buckle. This frees up the buckle for the K-touch. To fit it, you have to pull the handles apart to rotate the link and just snap the K-touch into place. To release the K-touch, press on the large transparent button at the top of it. The belt clip fits the K-touch as well. 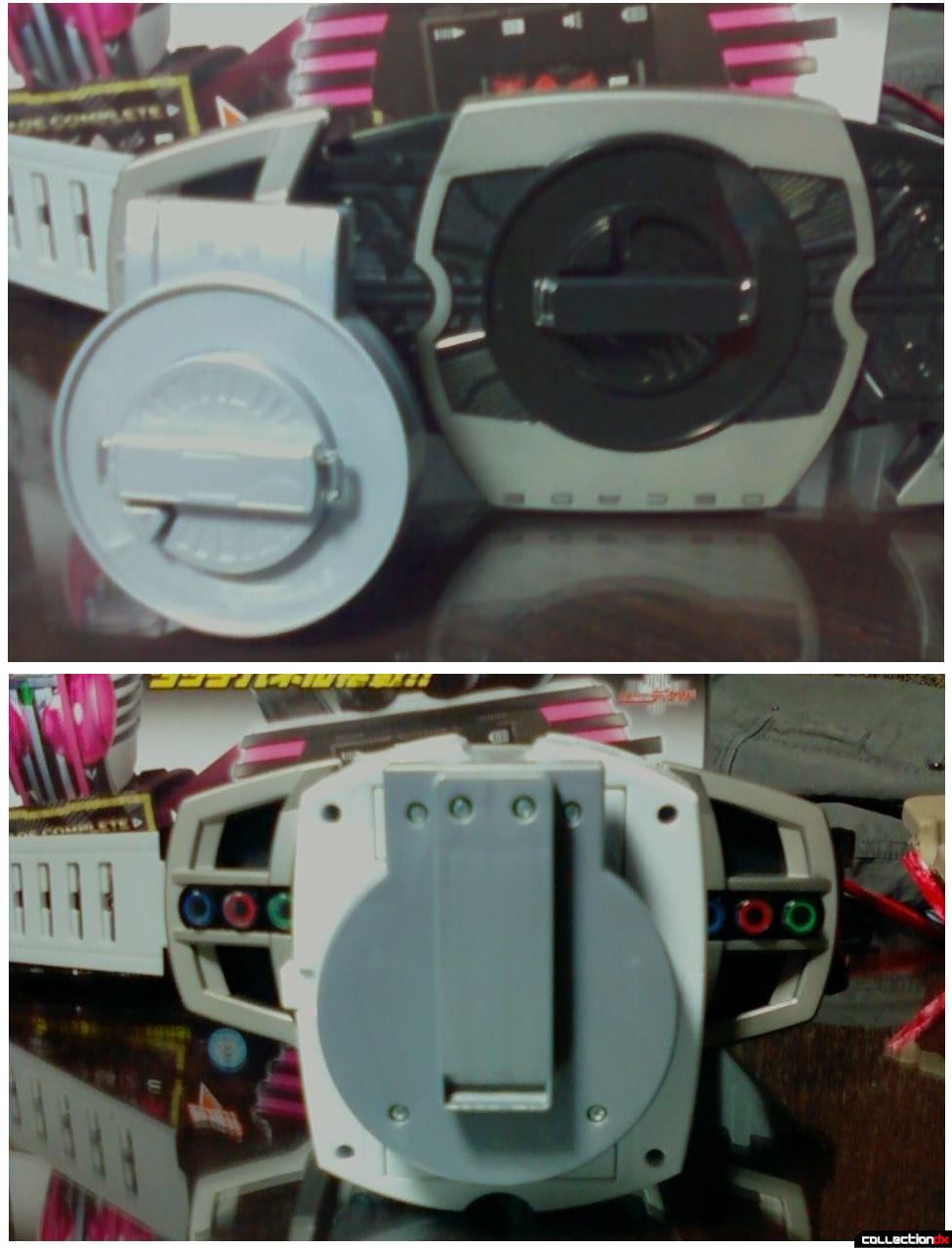 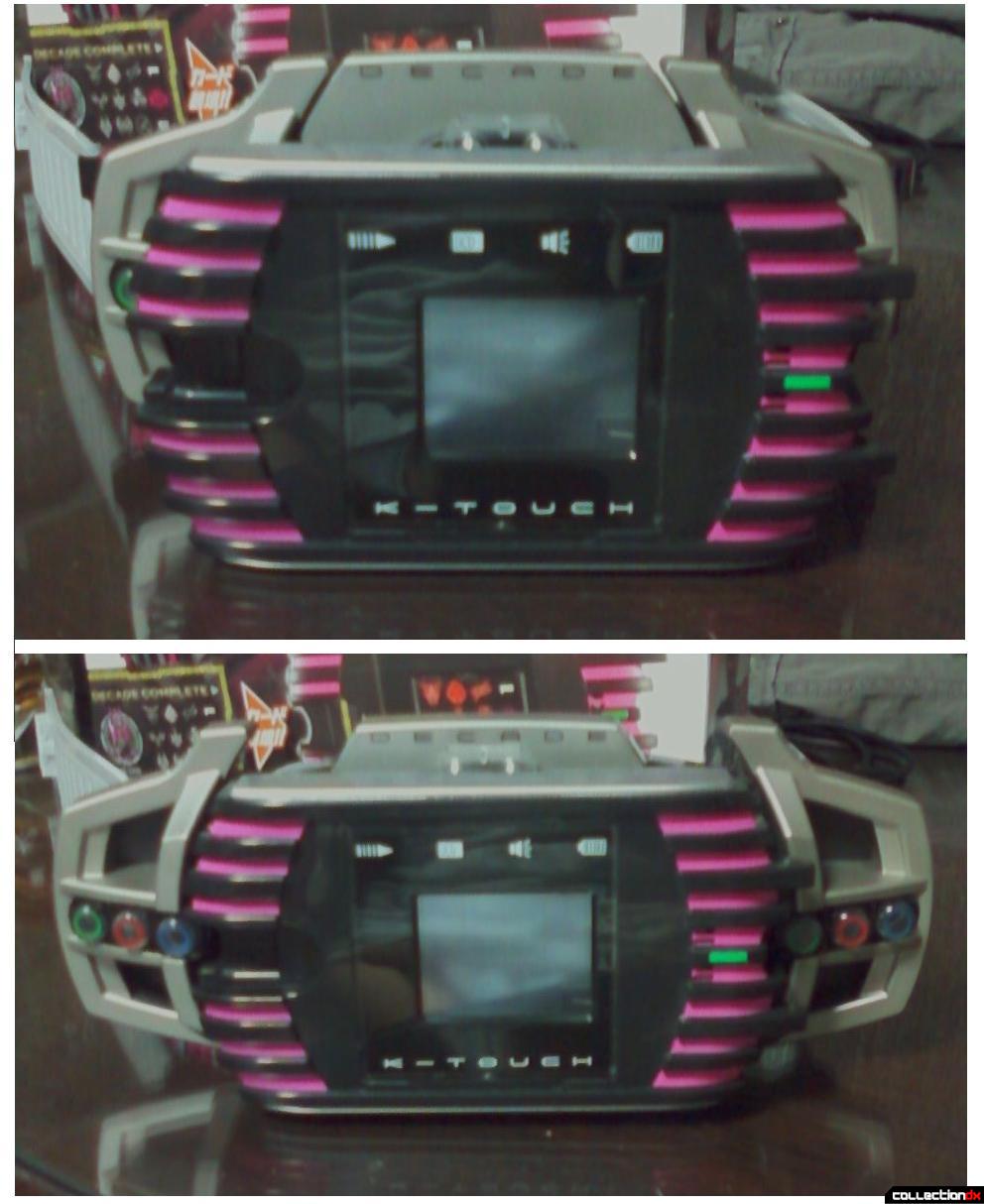 Onto the cards. One card has a number pad (rather odd positioning of numbers if you ask me) and the other has the emblems of the 9 previous primary riders, as well as Decade's emblem, an "F" and a "C" key. Unlike other Kamen Ride cards, these are made of rigid, transparent plastic. The details are printed right onto it. These cards do not function with the DX Decadriver (due to the lack of working barcodes) and give an error when inserted. It is also safe to assume that these cards will not function with the Ganbaride arcade game. Instead, the cards have a notch cut into the upper or lower right hand side. This is how the K-touch "reads" the cards - the cards are inserted into the K-touch notch side first and will determine what sound effects the K-touch plays. Inserting either card will give you the familiar start up tune. The sound for a card's removal is recycled from the Decadriver.

We'll get the number-pad card out of the way first, before we move onto the Decade Complete card.

The number-pad card delivers exactly what it promises...it's a number-pad. Next to either side of the "0" is the "enter" and "cancel" key. The K-touch says any number you press on the pad. Punching in the year of a Heisei rider's show makes the K-touch announce that Rider's name with the "Final Attack Ride" stutter. For example, when you punch in 2+0+0+0 and press enter, K-touch says "two-zero-zero-zero...Ku-Ku-Ku-Kuuga." Alternatively, you can hold any digit and it will do the complete sequence ending with that digit. Holding "1" gives the same results as punching in 2+0+0+1 manually. Pressing or holding "enter" when an invalid combination (or no numbers) are entered results in a short ring-tone..and that's all you're getting out of this card.

Onto the Decade Complete card. Press any of the Rider's emblems (other than Decade's) and K-touch will announce their names. The emblem becomes illuminated and will flash continuously. This stops after a couple of seconds and K-touch goes back to idle. You can continue to press and light up all the emblem to start the Decade Complete Form transformation. Once all 9 emblems are lit up, a ring tone plays and all the lights flash. Press Decade's emblem to complete the Complete Form transformation with the light and sound action from the show. Summoning riders is done the same way as in the show. Press any of the Rider emblems and then the "F" key above Decade's emblem. The K-touch will then announce that Rider's Ultimate form and play a sound. So, for Kabuto, it says "Kamen Ride...Hyper." 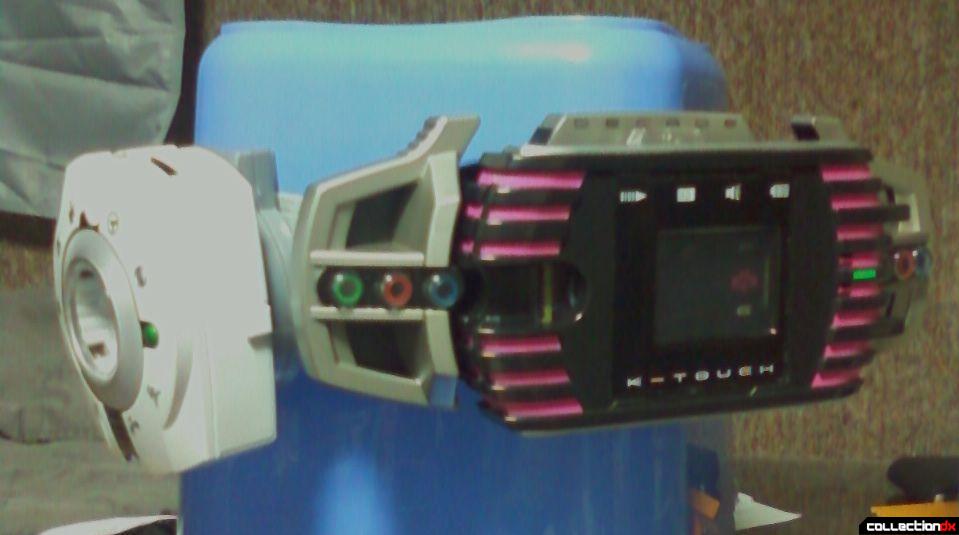 A couple of tidbits - you can skip pressing any or all emblems and press Decade's Emblem to start the Complete Form transformation. Also, you can press any number emblems and then press the "F" key to summon the Rider whose emblem was pressed last. You can also do this after all emblems are lit up and the ring tone is playing. Pressing the "C" key plays a variation of the start-up sound and returns the K-touch to idle mode. Pressing the "F" key now will give an error sound (same sound as if no emblems were pressed).

So now that you have the details, just how is the toy?

That depends...I really like the touch screen~ish feature and it's connectivity with the Decadriver. It sounds good and feels very playable. Unlike the Decadriver, it seems to have all sounds from the show. The volume switch was a nice addition i didn't expect. The belt clip was nice too and gives you something else to do with your Decadriver.

On the other hand...it quite a bit different from the show's counterpart. Because Tsukasa never uses the K-touch in his civilian form, it is sized for Decade's buckle. This would mean the K-touch is scaled down for the smaller DX Decadriver. When compared to the show's prop, the screen and emblems are much smaller. The screen indents a bit while, on the show, it is flush with the front of the K-touch. Also, the screen uses pressure to detect contact and you cannot slide your finger across the screen to activate emblems, the way Decade did in episode 20. 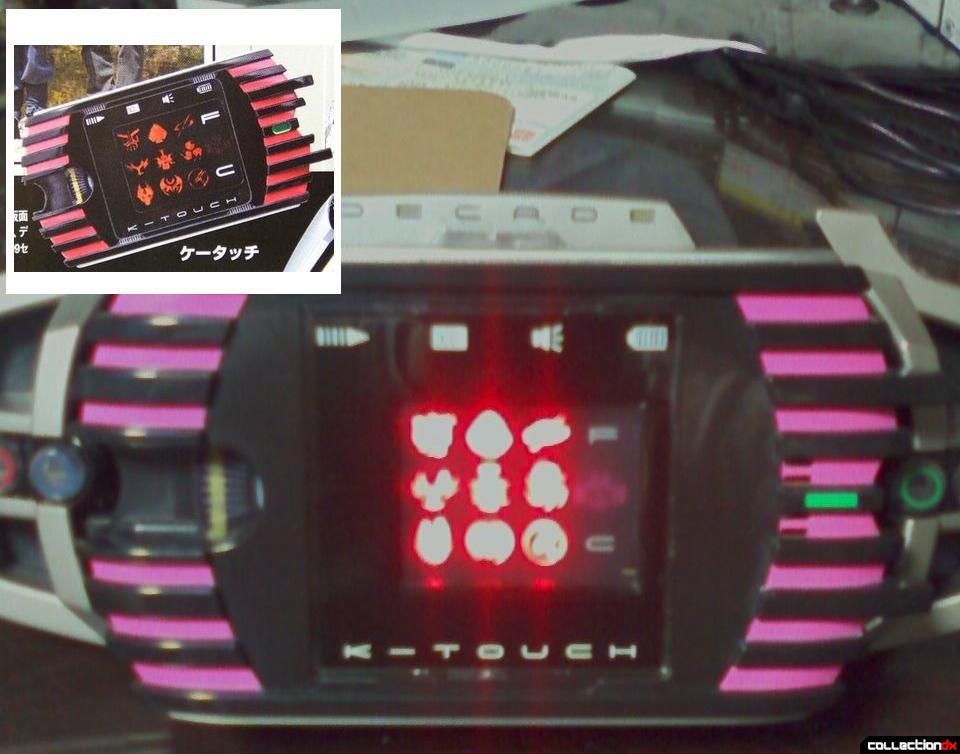 Other than that, it's not bad. Like many other "upgrade" items from the DX henshin series (for example Hyper Zecter), the features are quite limited, compared to the "signature" DX item (Kabuto Zecter). However, they stand by themselves and do not require the "signature" item for enjoyment, although any enthusiast who purchases an "upgrade" item is likely to have the "signature" item anyway. As far as maintaining Decade's "Theme" goes, this piece feels a little out of place, compared to other items from the series. The only connecting feature is the card, which does not function with the Decadriver or the Ganbaride arcade game.
So, if you like the show, this is a definite buy. If you simply like Kamen Rider toys, but hate the show, it's still a worthwhile item (mainly because of the touch-screen gimmick and the references to older Riders). Otherwise, it's an easy pass.

Nice, but no video review ? I'd love to see it in action