This figure was provided by Hobby Link Japan. Hokuto No Ken is one of the most iconic Shonen manga series. Unfortunately it is where some of the worst aspects of the genre got started. After the end of the original TV series, you'd think there would be no more to it right? Well despite beating the big bad, Kenshiro still had more adventures ahead of him in the magical land of Shura. I never really watched Hokuto No Ken 2 so I don't know a lot about Falco. He's pretty much your typical Hokuto no Ken character, a big beefy dude armed with a mysterious and powerful martial art who may or may not die a manly death filled with manly tears. As a Revoltech figure, he is up to par. 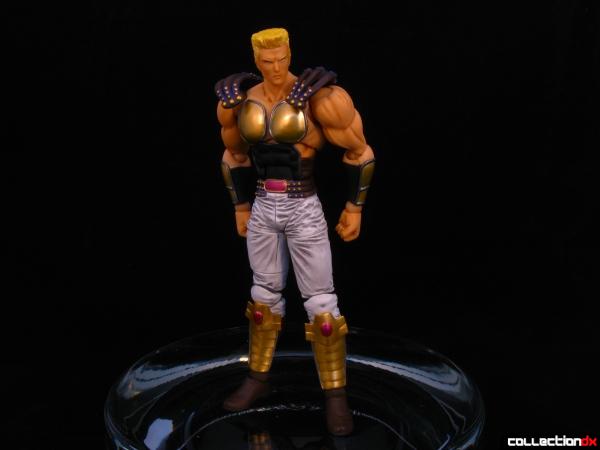 The basic figure is no different than the previous Revoltech Hokuto no Ken figures. Falco features numerous Revoltech joints and a slick paint job. 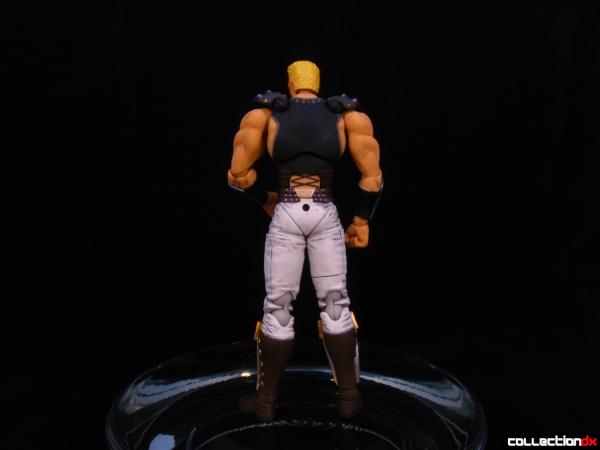 Every detail is recreated. Even his strange corset looking back brace. 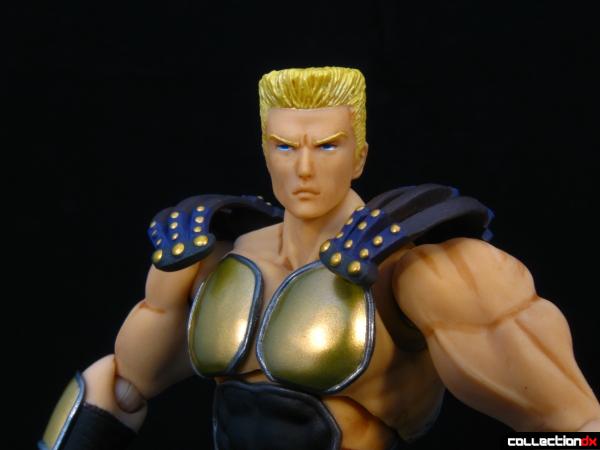 The paint on his face is nearly flawless. 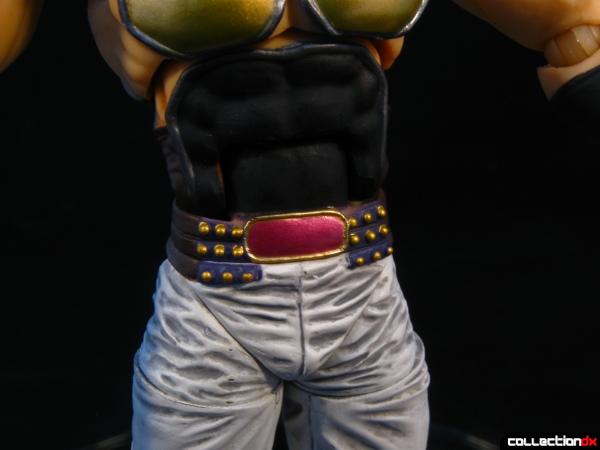 Taking a good look at his crotch shows off the figure's impressive detail. Everything from the belt to the highlighting on his paints is crisp and vibrant. 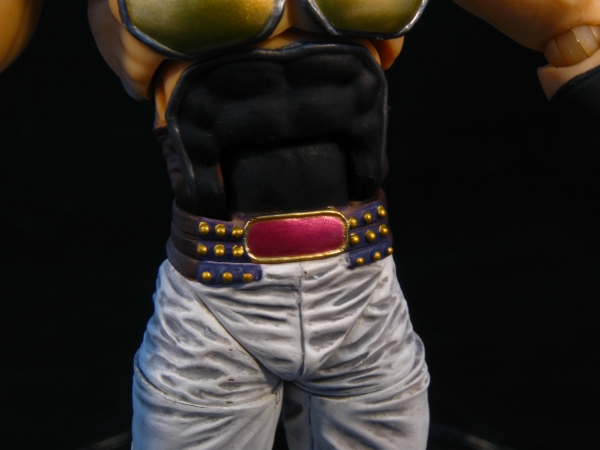 You may have noticed an extra seam on Falco's right thigh. This is to replicate his prosthetic leg. At one point in the series, Falco amputates his own leg in exchange for the safety of a village. Ever since then he has gone on to show that Hokuto no Ken is an equal opportunity Shonen series as the lack of major body parts will never stop a true badass. 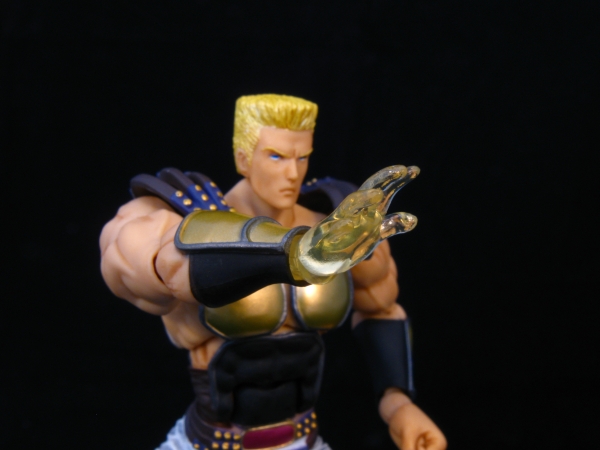 Speaking of fake limbs, this figure comes with a separate fixed-posed arm with a clear hand. This arm contains an LED which is supposed to represent Falco's ability to fire energy blasts from his hands. So I guess that means Falco joins Danboard as one of the few Revoltechs with a light-up gimmick. The arm itself has no articulation but the wrist, elbow, and shoulder are molded to resemble Revoltech joints for the sake of consistency. 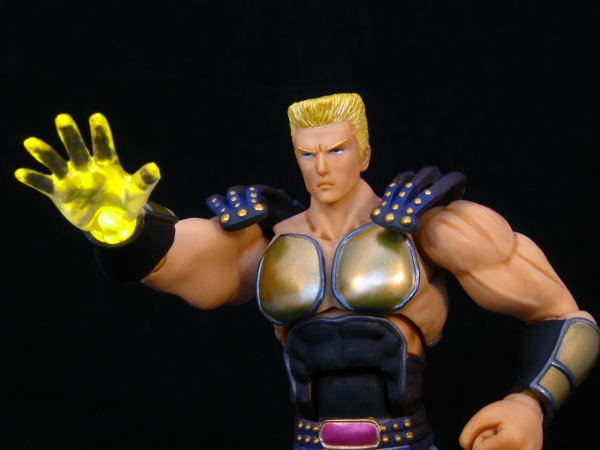 This hand of mine glows with... naw too easy. 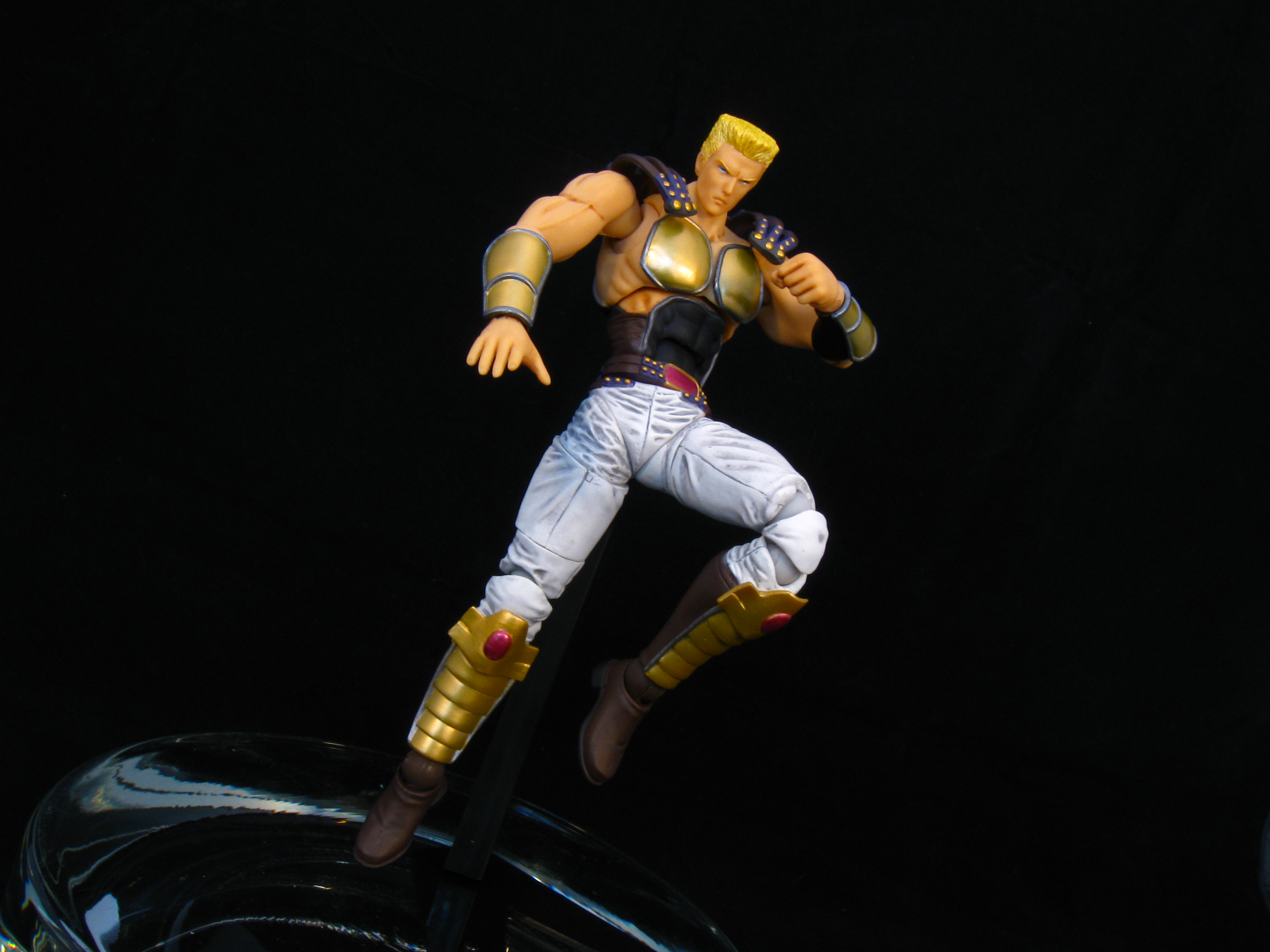 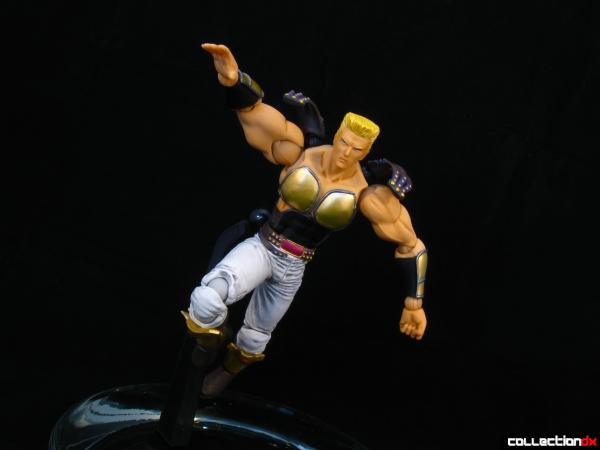 And has typical Revoltech articulation. 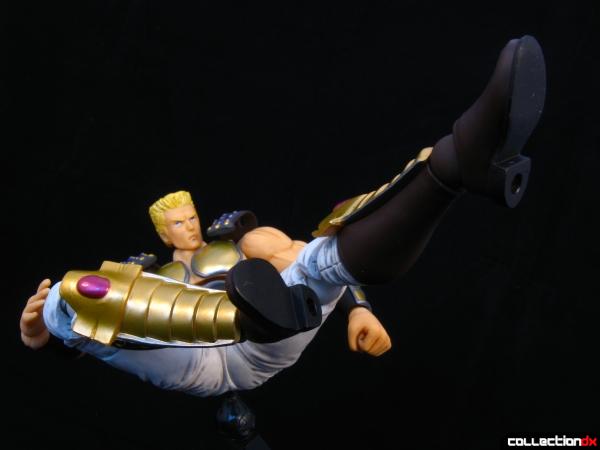 Now I'm not sure if Falco does a flying kick, but with Hokuto no Ken it's generally a sure bet he did at some point. Overall, this is another top class Revoltech figure. If I have one major complaint, it is that few of his optional hands fit right out of the box and require some modification on the part of the buyer. I really wish this guy was all set right out of the box but oh well.

A Falco reference? In my CDX? VF5SS, you win the site.

It was more Josh's idea.

I meant to tell you before, it's definitely the bet culture reference on the site.

Falco is 100% anime accurate! However, I miss his cape with the Maltese cross and the golden shoulder armour.