One interesting aspect of the Muv-Luv universe is the continued existence of the Japanese shogunate that coincides with how their world differs from ours in ways other than giant robots and killer aliens. The way all three of these things come together is the way Japan protects its emperor from being eaten by aliens with its own Imperial Royal Guard which is staffed mostly by those of noble birth. To give pilots in the Royal Guard a bit of an edge in battle, they started using an upgraded version of America's F-4 Phantom called the F-4J Kai Zuikaku. Also known by its Japanese designation of Type-82F, the Zuikaku is named after an aircraft carrier from World War II. The name itself translates to "fortunate crane." 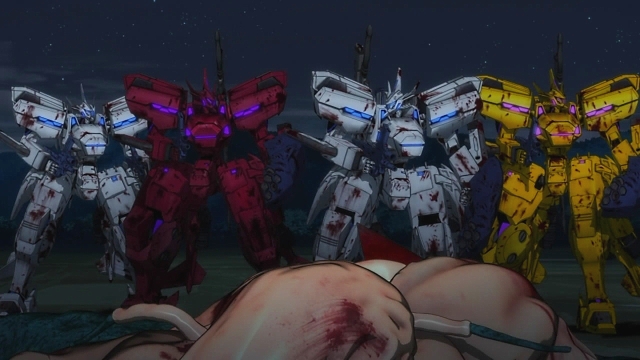 A small team of Zuikakus try to survive the BETA's invasion of Kyoto. A young Yui Takamura pilots the yellow TSF on the right.

The Volks version of the Zuikaku was the first limited release in their 2009 wave of A3 toys. At that time it wasn't specifically tied to the Total Eclipse anime, but the design would later show up in the show's original opening episodes where it was portrayed as Yui's Tactical Surface fighter in her first real battle against the BETA. The red one was piloted by Yui's commanding officer. The different colors reflect the heritage of the pilot with red reflecting someone who is a samurai and is close to the members of the ruling house. Of course the BETA, being an enlightened alien race, will kill anyone and anything regardless of color or social status. 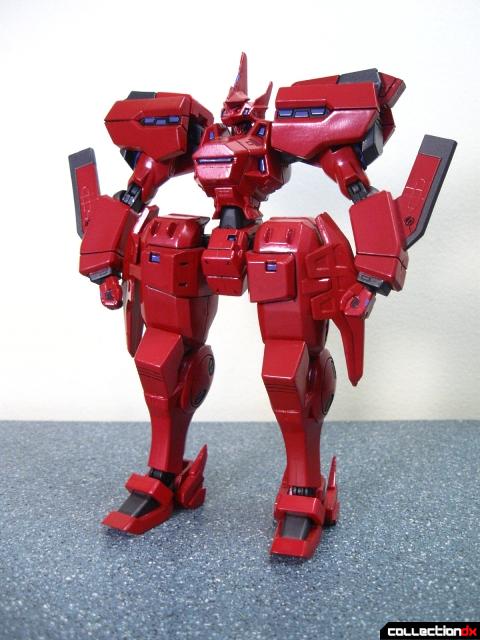 If there's one thing I absolutely love about this figure is the downright sublime coloring Volks used to bring this TSF to life. It is a truly royal red paint that shines with a glossy finish. It's just a wonderfully deep and rich color that looks great on display. Like most A3 figures, the Zuikaku stands roughly seven inches tall and is made primarily out of thick PVC plastic. There are two more variations on the figure, one being done in an equally royal blue and the other being a more subdued charcoal black. 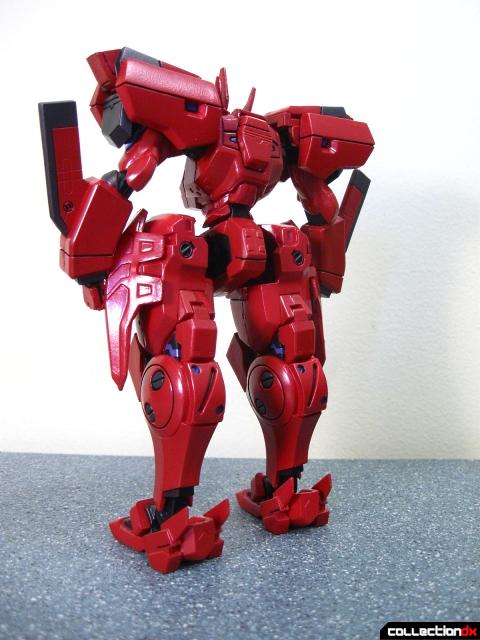 Due to the inherent chunkiness of the design, the Zuikaku feels quite thick and substantial even for an all plastic toy. 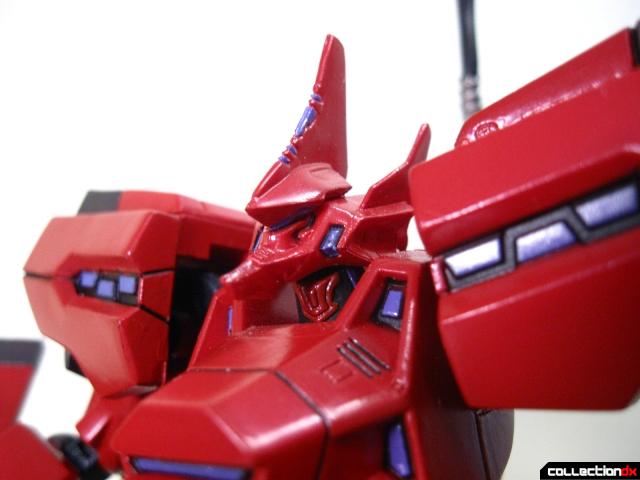 The figure is well sculpted with many details being picked out with powerful purple for the sensors and a good gray for the highlights. The more ornate head design is meant to reflect this machine's higher social status. 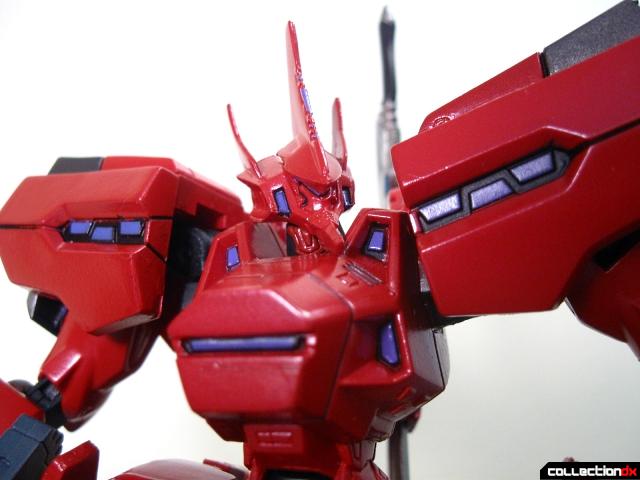 Unlike the standard Phantom, the Zuikaku has slightly better neck articulation and is not always looking down by default. It does still angle downward when you move it to either side but the leaner head design manages to work with this limitation and look rather intimidating. 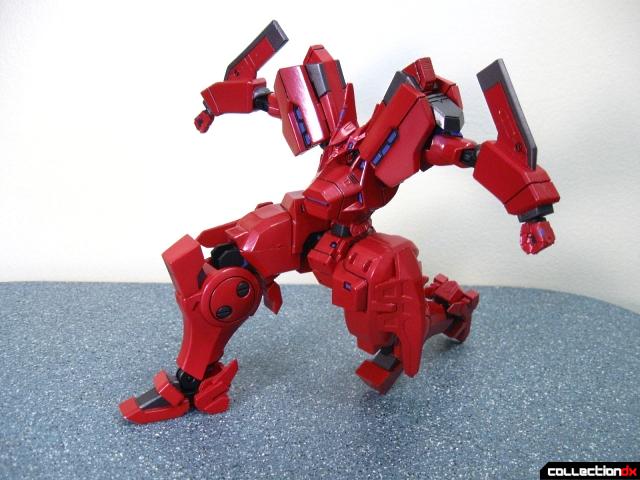 Articulation wise the Zuikaku is a major step up from the standard Phantom in almost every way. Most notably its knees are actually useful for doing more than just a mild squat. The slimmed down legs coupled with a hinged plate covering the back of the knee lets the Zuikaku do a respectable kneeling pose. The arms are slightly less capable than the Phantom's if only because you cannot rotate the forearms to get a tighter elbow bend nor do the shoulder pauldron hinge up so you can play with the inner bicep joint to get a full upward bend. On the plus side the front and back of each pauldron slides in and out so the shoulders can swing in and out without knocking into things. Each pauldron can also hinge up independent of the arm itself. Check my video for a better demonstration of how this figure moves. These A3 figures are all designed differently so it's always a real discovery to see how stuff works. 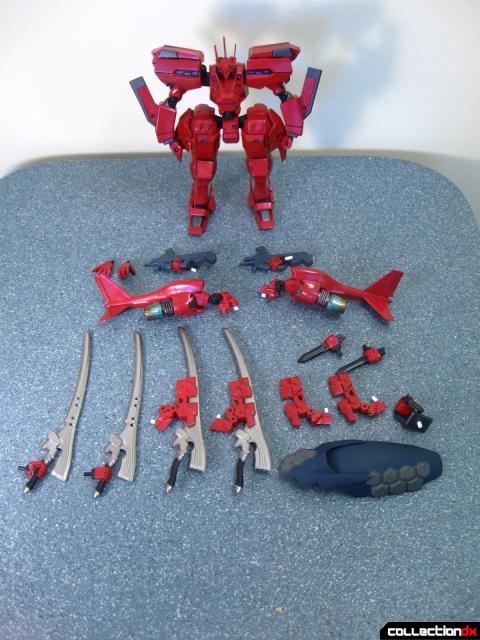 Accessories wise, the Zuikaku is definitely loaded for bear with four swords, two guns, two knives, and a shield. Of course in the typical A3 manner all of these are either attached to a hand or stuck on a mount pylon. 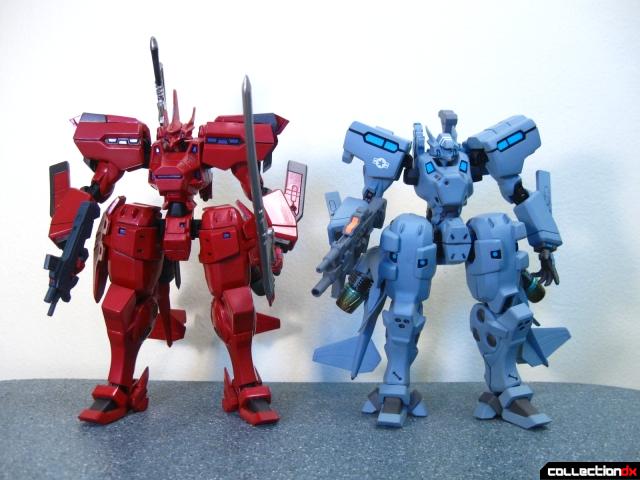 Here's the F-4J Kai Zuikaku with its predecessor the F-4 Phantom. Despite one being based on the other, the figures themselves are completely different. Every single part from the head, the chest, the arms, and even the thunder thighs have been redesigned. 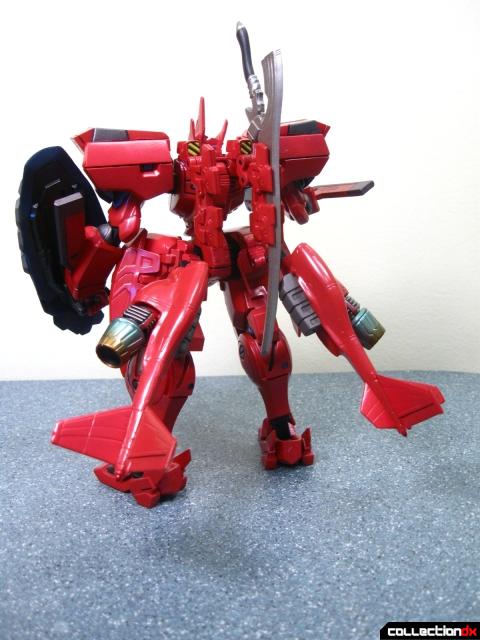 The only thing both figures share is the type of jump units attached to the back of their upper thighs. One of my friends thinks these jump units are the best looking ones and I must agree they have the right amount of jet fighter funk while still looking like part of a giant robot. Each most around on its mount with a single clicky A-Lock joint. 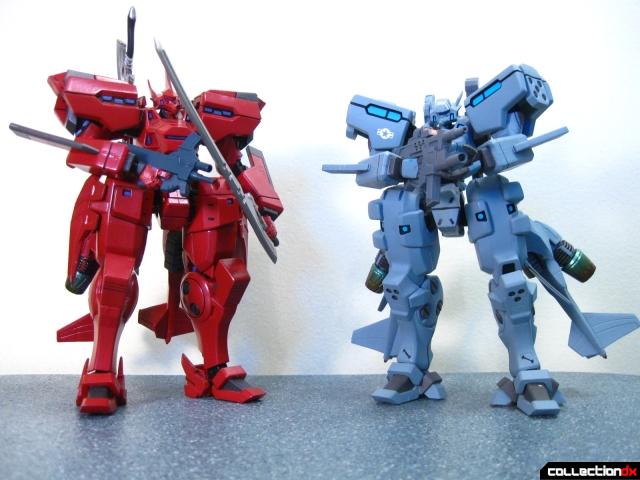 With all of its upgrades and changes, the Zuikaku is considered a 1.5th generation Tactical Surface Fighter and is almost on par with a true 2nd generation machine. While these two figures were released the same year, the Zuikaku is for the most part more ambitious and better designed. 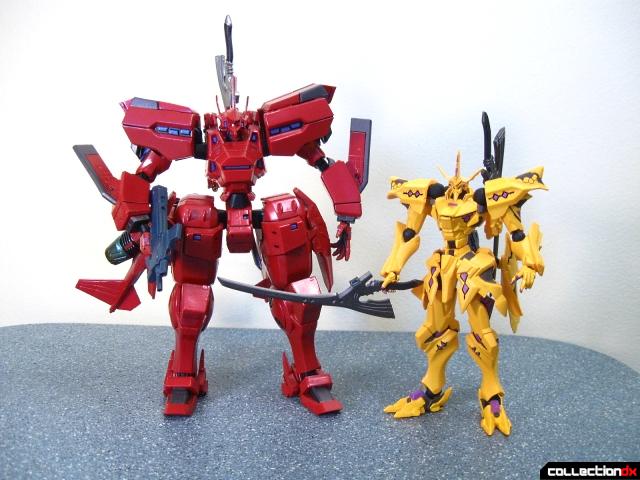 Story wise, the Zuikaku is meant to be the predecessor to the Type-00 Takemikazuchi TSF's which are also used by the Imperial Royal Guard. In fact the Zuikaku's designation of Type-82 refers to the year it was deployed (1982) with the Type-00 replacing it in the year 2000. 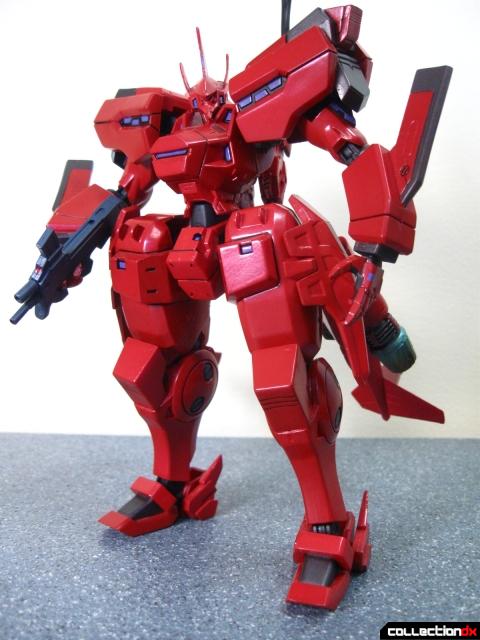 If I sound like I'm gushing it's only because I really love the look of this figure. It successfully combines the chunky presence of the Phantom with the extra flair of the Takemikazuchi. The Zuikaku has got that royal swagger thanks to its improve articulation. 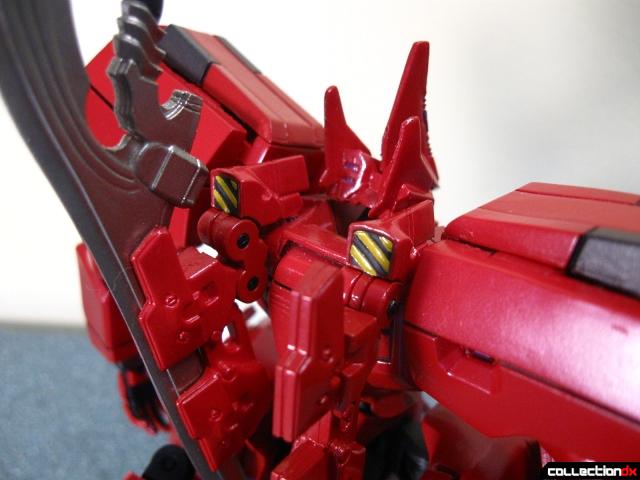 Like most Japanese TSF's, the Zuikaku is normally equipped with one or two swords that store in their own specialized mount pylons. Detail wise, I really like the caution marking on both the full and empty mount pylons. I can just hear a technician saying to some neophyte, "Do no stand there lest you be crushed by Giant Robot Sword Delivery System." The two mount pylon types differ in that the bare one only has a single hinge joint while the ones with a sword have two hinges. 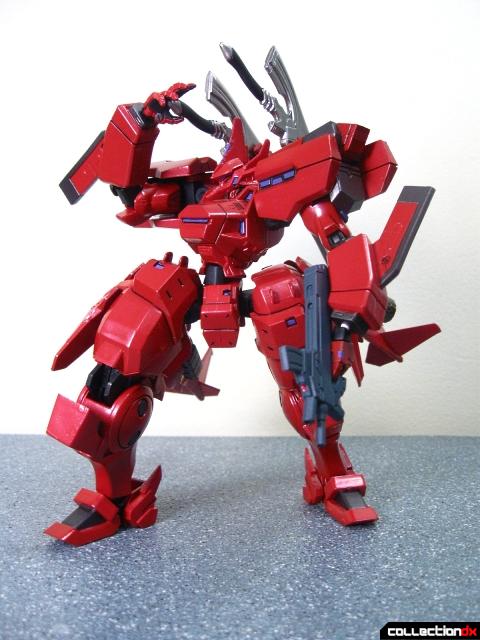 The end result is you can depict your Zuikaku reaching up and drawing a sword from its mount pylon and then swap out the hand for one with a sword in it and replace the sword bearing pylon with the empty one because in the end these figures are designed more resin kits than toys. It's pretty amusing how there is a full sword in each pylon that only exists to get glued in between the prongs. 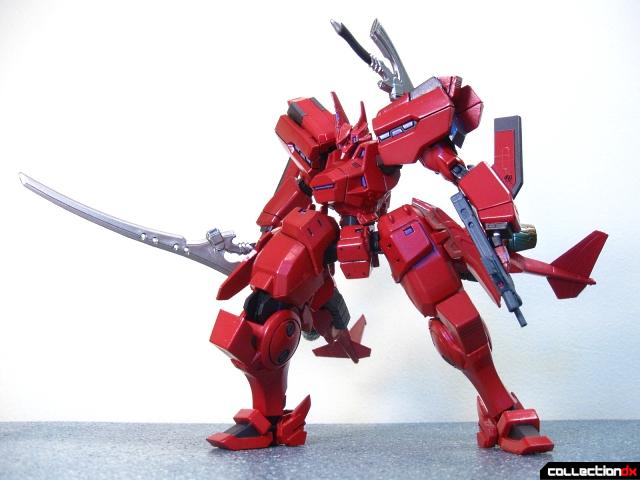 Silly toy design aside, the Zuikaku carries its swords without any problems and wields them with a striking sense of gravitas. The figure has a pretty good sense of balance too thanks to its excellent ankle joints and better weight distribution over the regular Phantom. 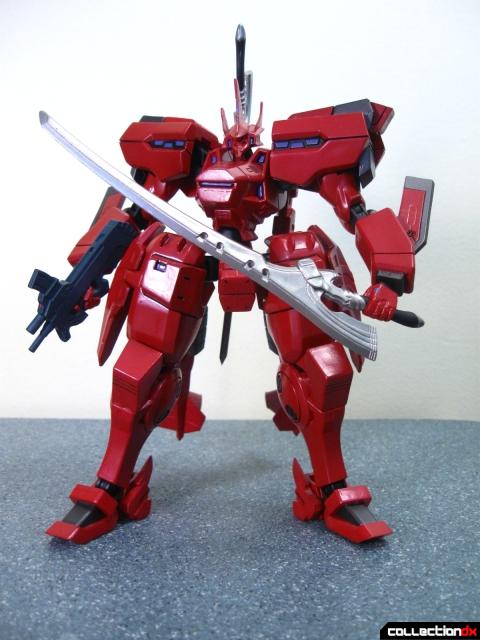 When you got it you just have to flaunt it. 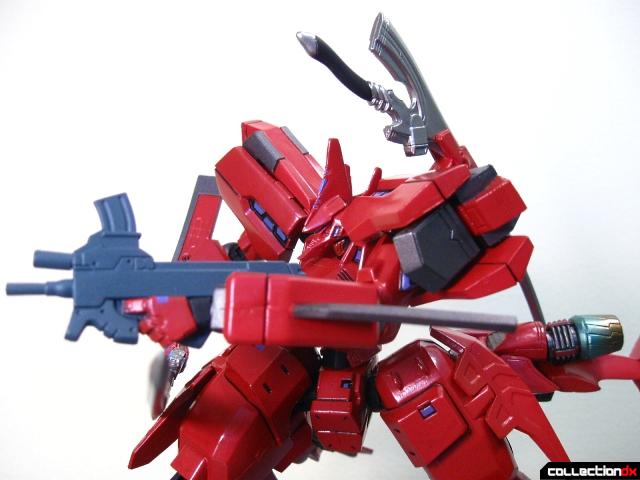 The standard issue Type-87 assault cannons look good in the Zuikaku's hands and even feature the peculiar pistol grip just like the real life P90 that inspired their design. 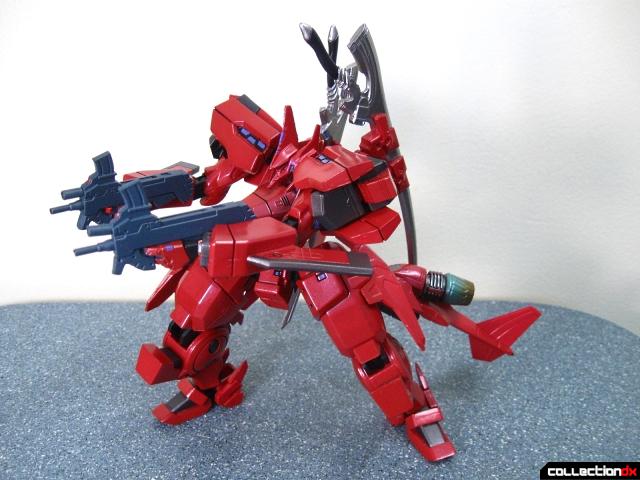 You get a pair of Type-87's because while one gun is fun, two is woo-tastic. 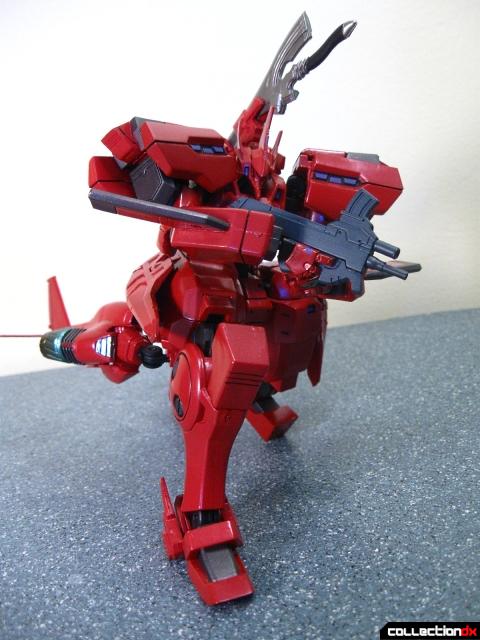 Even fully loaded the Zuikaku can still kneel down relatively easy. 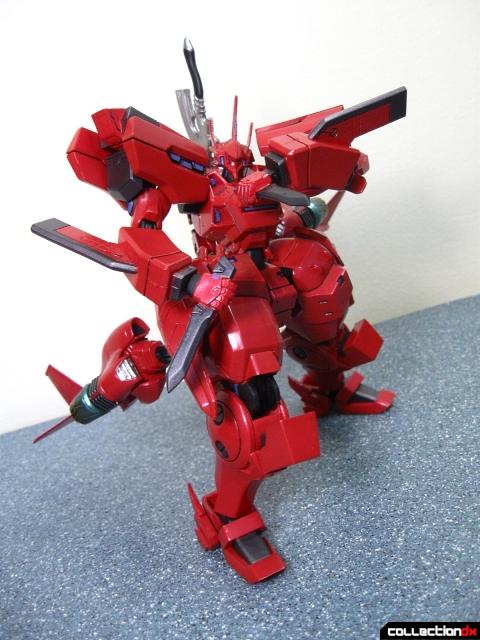 Like the regular Phantom, the Zuikaku comes with a pair of dagger wielding hands that grip the knives with the blade facing downward. It's better for CQC. 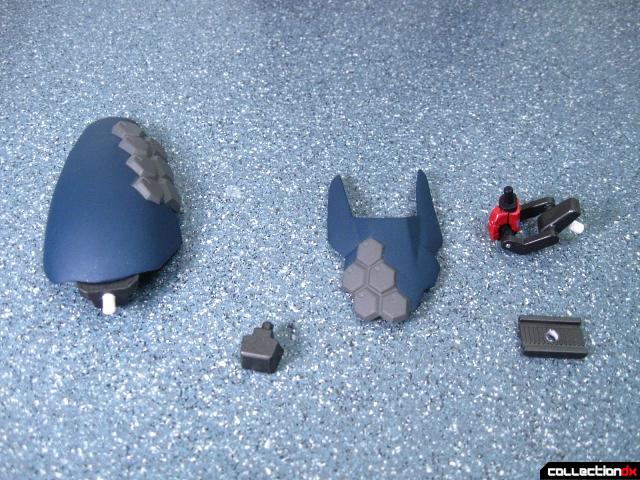 If there is one accessory I was less than pleased with its the shield or "supplemental armor." It breaks down into multiple parts in order to facilitate its main gimmick and to replicate a simple sliding handle. The little gray piece that serves as a spacer when the shield is in normal mode is difficult to remove and required some freezer time before I could get it out. The main portions of the shield are made of thick plastic and feel pretty substantial. 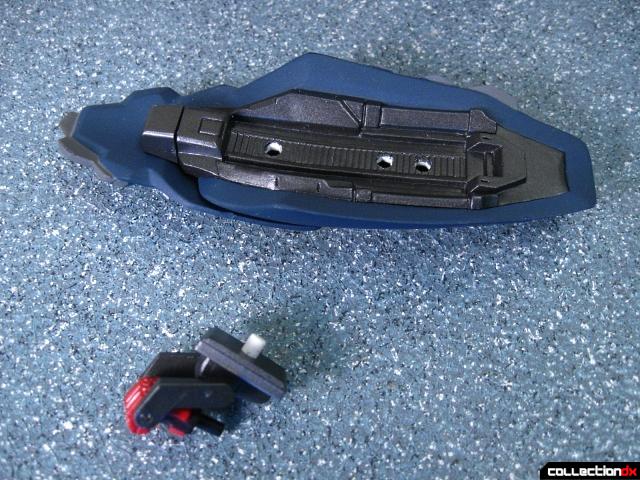 Also the extra holes for pegging in the handle seem to be a little too small. This isn't a huge problem as I found the upper positions kind of awkward but it makes me wonder what's the point of them being there if they barely work in the first place. Also I need to point out that the manual makes it clear that the shield's handle only rotates where the hand is attached. It does not rotate where the handle meets the shield mount and would probably break if you didn't know this and tried to force it. It's hard to tell but that part is one solid piece. Years of Gundam models has taught me otherwise, but Volks doesn't play by anyone's rules other than their own. 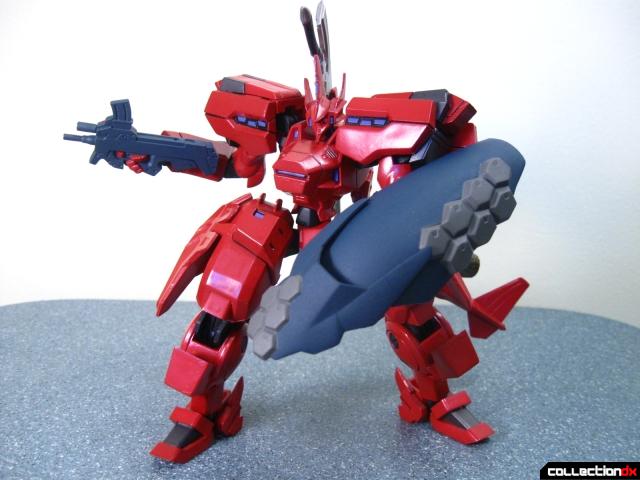 The end result is a shield that certainly looks the part but is a little too heavy for the arm joints to work really well. You can definitely rest it in a defensive posture but doing more requires careful consideration. 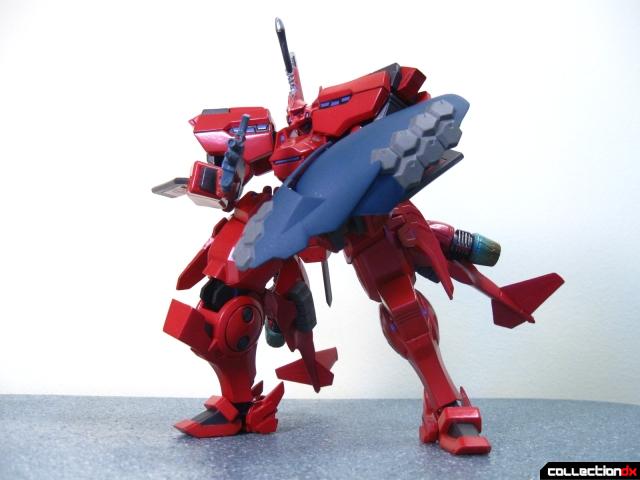 The little gray panels on the shield are actually reactive armor plates that explode when enough force is applied to them such as when a Grappler-class tries to claw a TSF to death. This is used to knock an attacking BETA off guard so the TSF can finish it off with gunfire or a swift sword swipe. 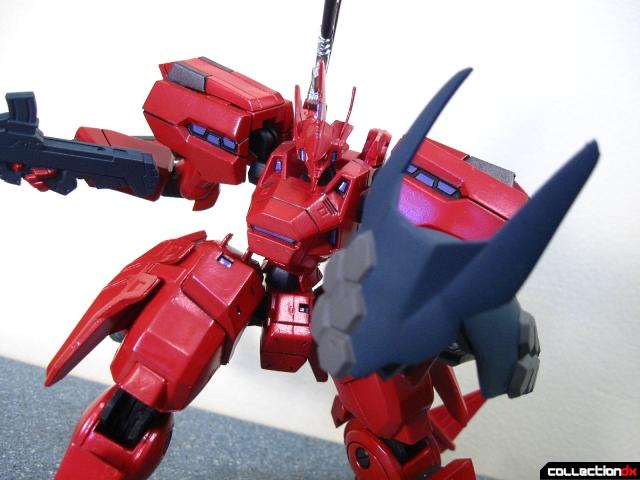 Because of this feature, the shield is also designed for offense with the front being capable of flipping down like a set of explosive brass knuckles. 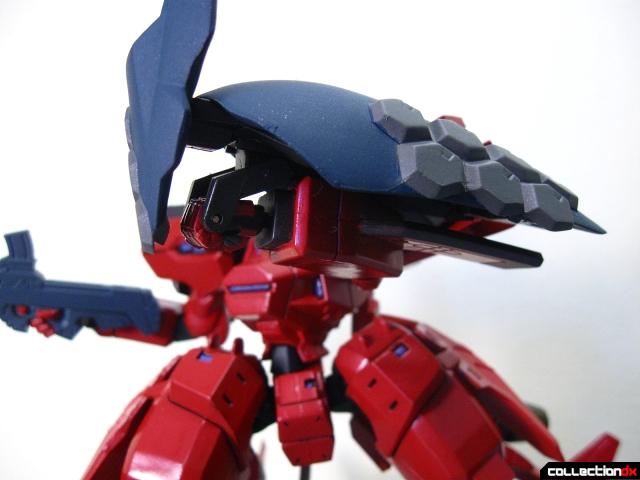 To do this on the A3 figure, you simply remove the gray spacer piece and plug the front section of the shield directly into the remaining portion. Again it does work but I'm kinda of leery of the fragility in the non-moving section of the shield's grip so I tend to rest the whole shield against the arm for stability. I was looking forward to doing some more KLONK action but I didn't expect the shield to be too beefy to wield effectively. 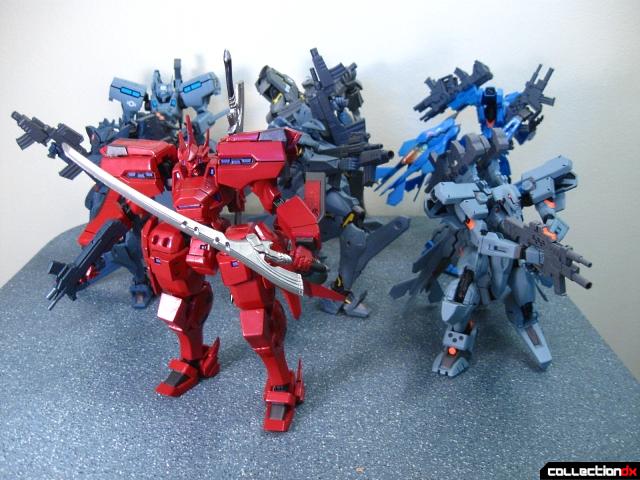 Much like how the Takemikazuchi stands out among in my Revoltech collection, the Zuikaku's royal red is a striking departure from the more standardized grays, blues, and more grays used on my other A3 figures. I had been eyeing a Zuikaku for a little while and happily jumped on one I saw at Entertainment Hobby Shop Jungle. The Zukikau's seem to be running around 4500 to 6000 yen in the aftermarket but are a little rarer than the others. It's definitely one of the standout pieces in the line both in terms of design and the glorious color.