Armor Plus is a new line of action figures by Bandai. It appears to be a mix of everything they have learned making Saint Cloth Myth and S.H. Figuarts figures over the past few years. Pulling from different series, Bandai is setting out to make a line of armored action figures. The first two out of the gate where this Alto Saotome from Macross Frontier and Rekka Ryo from Yoroiden Samurai Troopers. I am taking a look today at Alto. 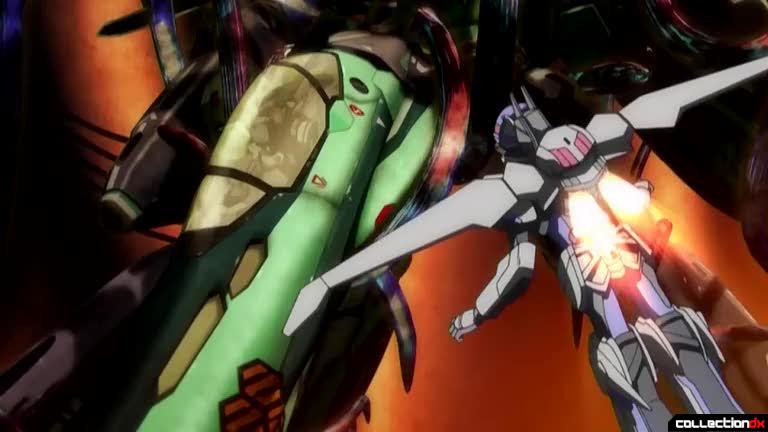 The ladies of Macross are turned into sexy, fixed pose statues while the guys of Macross are being made into action figures. Bandai kicks off a new line of figures called Armor Plus and the first in the series is Alto Saotome and his ExGear. 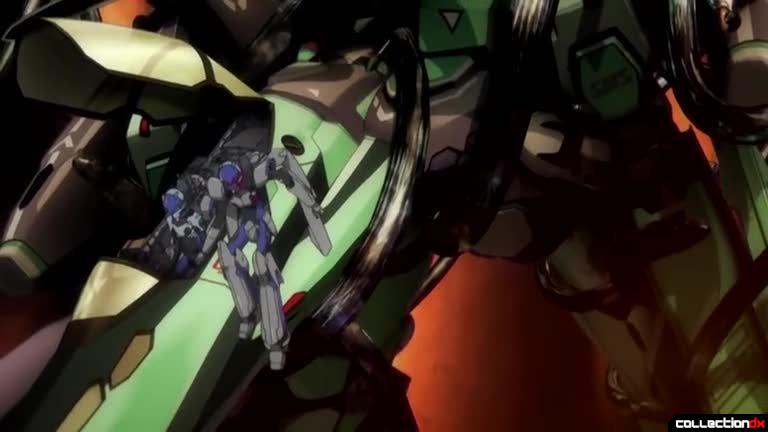 What the heck is an Ex-Gear you might ask? In a nutshell, it's the Macross equivalent to a Mospeada (Cyclone), an emergency survival mecha but instead of transforming into a motorcycle it transforms into a cockpit?! Sort of... 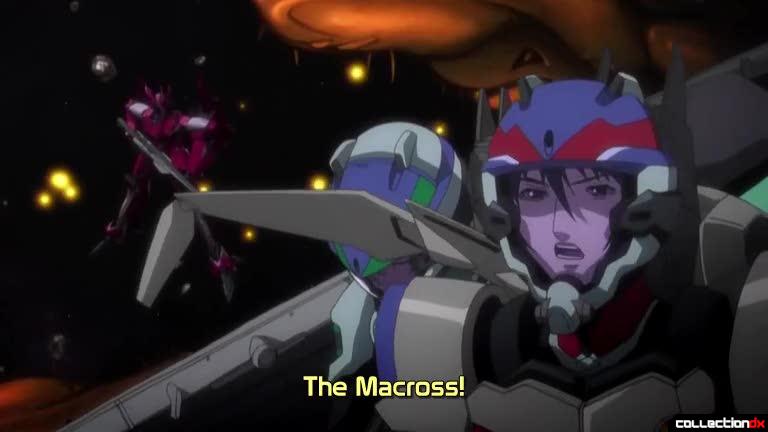 It is basically a powered-armored suit that forms the cockpit of the VF-25 Messiah's and provides the pilot's interface to the ship. When the pilot must eject, this suit equips to the pilot allowing them atmospheric flight for up to 15 minutes and survival in space for up to 3 days.

The package is the usual Japanese window-box with lid decorated with four-color art and images of the toy. Nothing dramatic here, it's basic and utilitarian.

Surprisingly, the inside lid features a lot of detailed information about the mecha in English.

Inside the box we get:

Alto Saotome is the main character of Macross Frontier. Born in space in the Frontier colony he dreams of being able to fly in an open sky and to get out from under the shadow of his father's legacy. Alto was a popular Kabuki dancer until he left it behind to pursue his dreams of flying.

The figure is more akin to an S.H Figurearts style figure with over 40 points of articulation. Paint detail is excellent and applied with precision with no over or under-spay anywhere. The only complaint about the figure is the ankles. They're a wee bit spindly. The figure is all plastic with no die-cast metal anywhere.

The Ex-Gear itself assembles easily and can be attached to the provided stand in its cockpit mode. Again paint detail is excellent with no signs of under/over-spray.

Of course, you can actually sit Alto into the cockpit.

It is primarily plastic with just the front panel of the leg armor being made of die-cast metal. Ironically this ends up working against it when you put the suit on Alto. But more on that in a moment...

Transformation is pretty straightforward but is a bit fidgety particularly with the arms. You have to make sure the arm piece lines up correctly otherwise you will pop the hands off when closing the arm parts.

The fully transformed Ex-Gear is beautifully done here. Sculpt detail is very good and everything sits well on the figure. Parts stay on and do not fall off leaving it with a nice solid, toy-like piece that can be picked up and flown around.

The Ex-Gear can be displayed on the stand to mimic flying poses but the lower legs weigh just enough to keep them from staying where you pose them. The weight weighs them down over time. Not a huge complaint, I may have just gotten a figure with looser hip joints.

The leg thrust panels do rotate on the unit.

The wheels on the bottom feet do not roll.

The figure remains fairly pose-able even with the Ex-gear equipped and looks good on the shelf. While I do like this I'm not overly excited about getting any more of these. One is kind of enough... unless they do Luca's and include a Sheryl with removable panties... (you'd have to have seen Mac F to get that.)

13 comments posted
What would really make this

What would really make this figure perfect would be realistic hair and a sound box featuring clips from the series.

An emergency escape pod that does not transform into a space fighter? Don't think I've ever heard of that before, but it certainly sound refreshing.
So the Messiahs are slave-labor robots that mimic the movements of the pilot like the VF-2SS is, rather than the typical sit-in-a-seat-and-move-levers-and-foot-petals design they used for the VF-1 through -19 Valkyries?

Eva,if you haven't seen this show,you should definately check it out. This is probably the best mecha show this decade,maybe excepting Diebuster. I know I'm going to get flamed for this by someone,but I honestly feel that while Gurren Lagann is a good show,it's a little overrated,and Macross F should be more recognised. Just my opinion,but at any rate it's worth watching.

Macross F: Best Mecha Show of the Decade? Are we all of a second ignoring Turn A Gundam, RahXephon, Kotetsushin Jeeg, Mazinkaiser and Overman King Gainer? Admittedly, two of those are very subjective (Jeeg and Gainer) but seriously? I try not to RAAAAAAAGE often, but there's way better stuff. Firstly, EVA has to watch Timeranger!

Wow! This is a cool looking figure!

I still have not seen Macross Frontier, but that suit looks really awesome.

nice review and pictures! I have this too and I like it even though I have not seen the show. unfortunately I have huge hands so when I tried fiddling with separating the two chest piece halves to take the armor off, I snapped one of the tabs off. I fixed it by drilling out the tab spot then filling it with epoxy and the placing the remaining tab piece in. Worked like a charm. Just be careful when securing and removing the armor. Make sure figure is seated correctly. Mine also had a floppy wing :(

take issue with the best mecha show of the decade bit, too. IMHO it's not even the best show of the past couple years. Gundam 00 would take that honor.

If you haven't watched Turn A Gundam yet, I highly suggest you do. The best thing about it is that it isn't a Gundam series, more like a random Tomino show Sunrise slapped the brand on to. I suggest you don't watch it if you aren't confident in your sexuality, though.

If you pop the shoulder pads off the Alto figure, you can get a bit more shoulder articulation for the arms.

Review is better than the toy.
Ill start by saying I've never watched the shows (I'm sure I've seen a few but never followed).
I saw this figure and liked the idea of a figure with armor suit that can fly. What's not to like right?!

I started putting this guys armor on and it was a mess. Some parts are too tight others too loose. To be honest I didn't even finish before I said fk it and put the few pices I removed back in the package. I will try again, but my point is I was disappointed. I'm also amazed that Atom got the pics look so good, I hope I can manage to get mine together to put him in my display case.

I just opened him last night so I am still a little heated while i write. Ill be sure to update this if/when I get back to him. If I dont sell him. (If anyone's interested let me know)