Evangelion really gets some premium treatment from Kaiyodo as of recently. I once said that Revoltech must be one of the very few if not only toyline that has portrayed EVERY single possible variant of these biomechas you can think of... ok, I won't deny people behind Mr. Yamaguchi do like to annoy us every now and then by making some of these variants webshop exclusives that are pricey and number-limited (New Movie Edition Unit 00 and 03...you evil fiends!), but the fact remains: if a new version of an Evangelion Unit pops out somewhere, you can bet your money Revoltech will introduce it at one point. This truth covers the field or Rebuild Of Evangelion as much as any other NERV-related subline... so when this evil and crazy variation of all-famous Eva Unit 01 showed up in Evangelion 2.0: You Can (Not) Advance, it was just a matter of time before Yamaguchi-sama put his talented sculpting hands on this model. Just as it was a matter of time before we, CollectionDX, put OUR hands on this toy.

At this point I want to thank HLJ.com for providing us with this sample piece, we really appreciate it. Still, now that we got this fellow, it is our sworn duty to show him for the good or the bad... Before I go on, I need to mention one important thing. This review will be sliglhty different from my "classic" Eva 01 NME review, as this toy is 50 % old and 50% new. Logically, I'll concentrate mostly on what's new/ altered here, maybe pointing some other stuff as well... Enough of fascinating intro-banter, time to go a bit crazy! 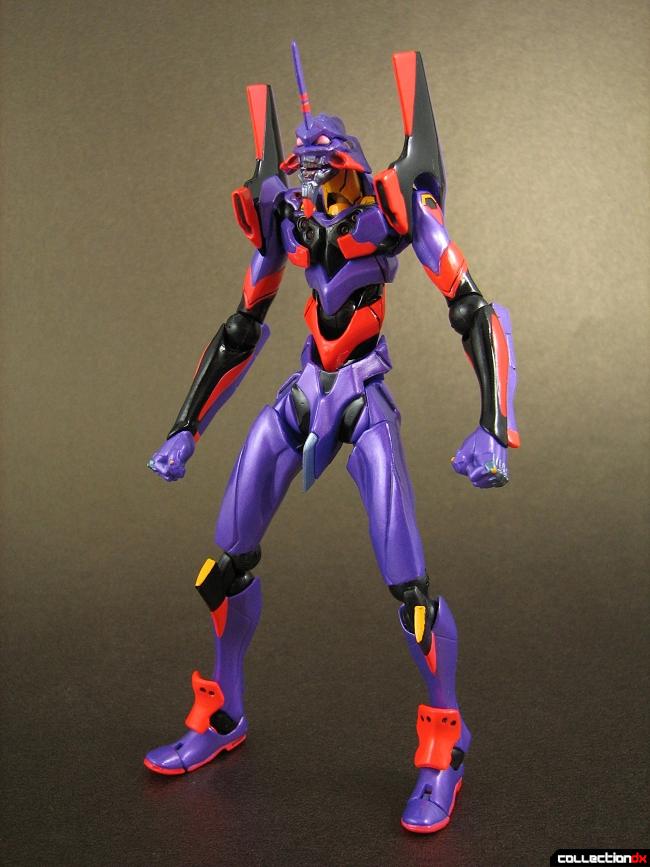 Disclaimer: this is not how this toy looks right out of the box, I put it into this configuration to have some sort of order in this article. And it looks almost exactly like the regular 01, with the only noticable difference being all the green touches turned deep, vibrant red and a new head, to which I'll come back in a moment. Otherwise, it's identical to normal Test Type, at least at first glance. 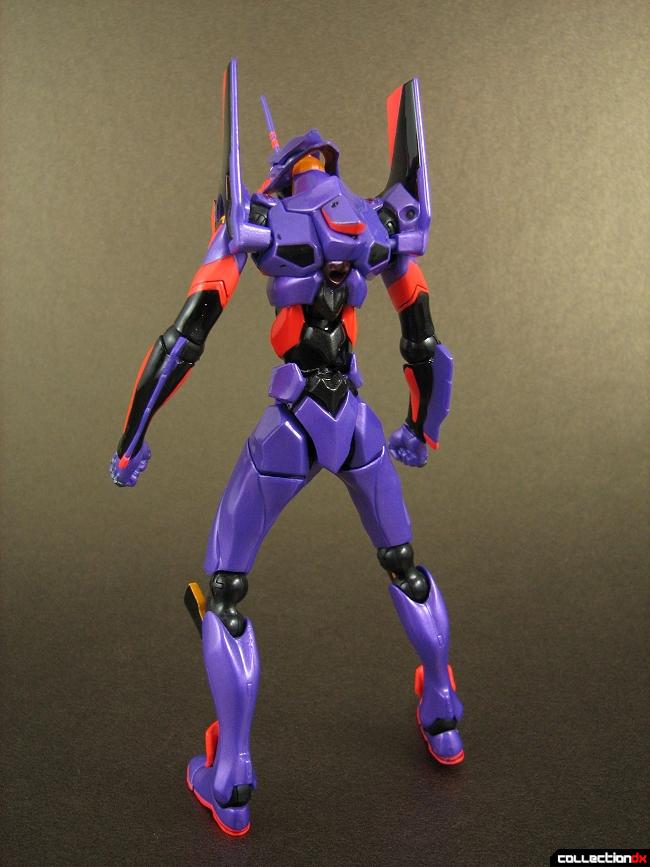 I'm sorry to say one of the returning features is the common Revoltech problem with standing straight without some fiddling... At least the hip/thigh joints on this one are tighter than on my normal 01 from Evangelion 2.0 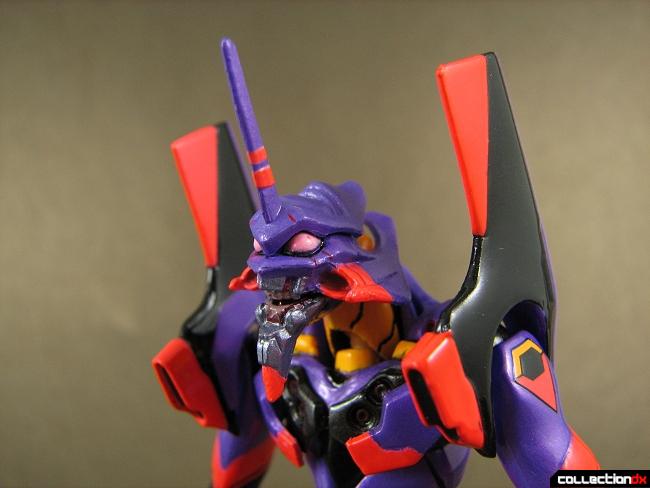 Soo... the first new thing on this release is the new head designed for Berserk/Awakening mode. It's here, because after 20 minutes of struggling I decided I'm not THAT desperate to have it swapped when I'll give it a far grander focus soon enough. Anyway, the new features of this head-piece are the bigger, disturbingly organic-looking eyes with pink/red overtones that overall play a huge part in giving this toy it's selling point feel of uncontrolled insanity. The other new thing present is the upgraded mouth that now shows that what we previously considered to be Eva's teeth was just two guards that covered the real, fully organic inner mouth, complete with reddish teeth, red gums and a tounge. And guess what? 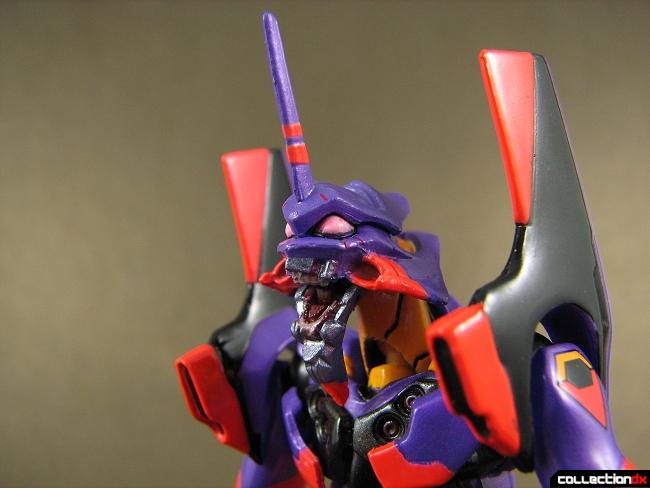 The mouth opens wide to allow Eva to howl it's pants-wetting scream of primal fury. I remember that moment... Evangelion really showed what it's made of back then. 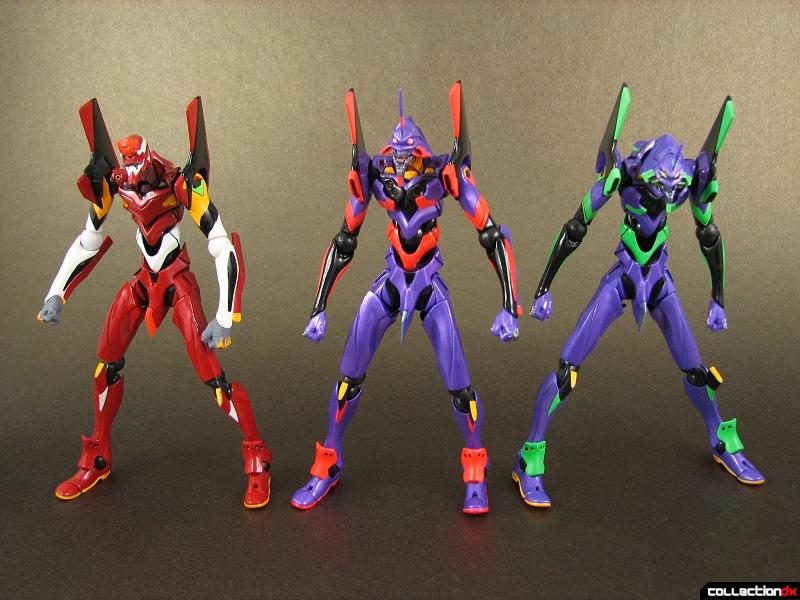 Before we go on, comparisons! Going from left, Eva 02 Production Model, 01 Awakening and 01 not-Awakening. Adorable trio, even if by the virtue of the Holy Plot these will never stand in the same place at the same time. 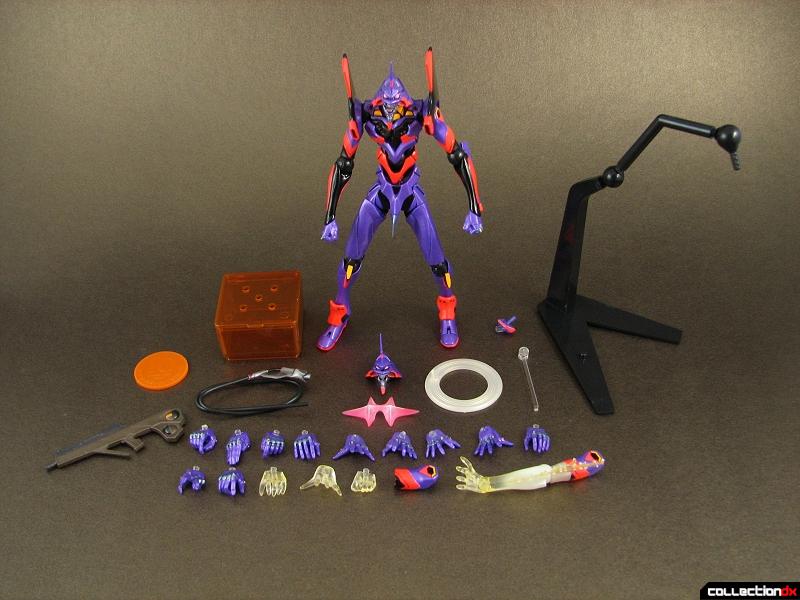 It is crucial to introduce what comes in the box along with the Evangelion itself. I'll split these into two categories, first one gathering what is recurring in other NERVed releases I came in contact with and the second that assembles parts dedicated to the Berserker. Off we go with group 1.
- 5-piece Revoltech DX base (base, arm, extender arm and two Revo joints), identical to my other two Evas.
- Revoltech coin worth 10 points. You can throw it away or choke that cousin that ticked you off with it. Unless you live in Japan where it gives you loyalty bonuses once you gather enough of these.
- Revo container for all those small annoying parts that you probably already lost.
- Pellet gun/ assault rifle. That one cute weapon of Eva that always proves ineffective against angels and thus gets destroyed first.
- Umbilical cable power supply. As always, is made of a wire coated in rubber and is fully adjustable, but I somehow doubt most of you will ever take advantage of that.
- 13 hands same with Eva 01 "standard"... however, it seems I wasn't the only one unhappy about the lack of tightness in the wrist-mounting plugs, as Awakening Ver. has the hands redesigned so that they are standard Revoltech plastic glued together with clear plastic plugs. This alteration makes the hands stay in place much better (I'll add one more picture here).

Ok, time to introduce the second group of parts and the Awakened form of 01... at this point please forgive my oncoming silliness (yes, I do give you a forewarning, there's lots of silliness ahead), but considering this is the craziest-looking toy on my shelf (representing the fury and amok incarnated chara-wise), I simply can't do this any other way. You have been warned. Proceed. 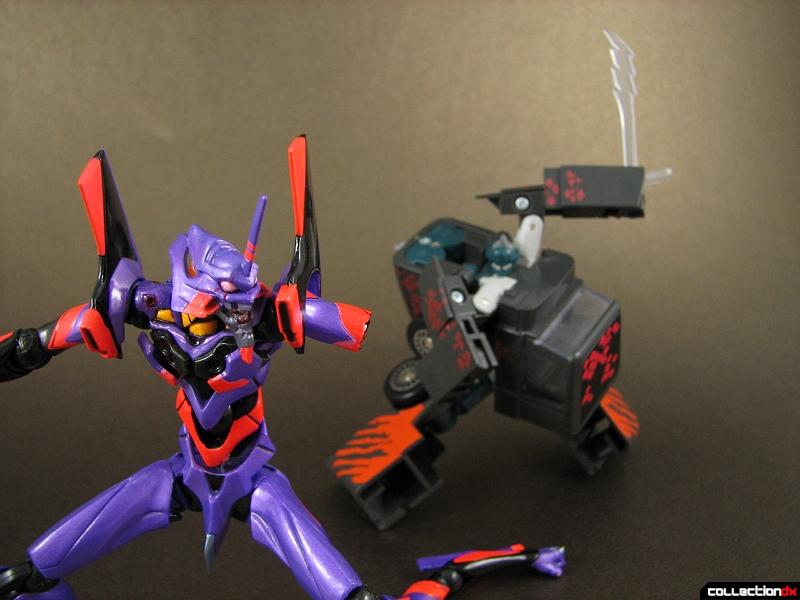 It was a good day for Eva 01...until that jerk Sizzle (Fireball in Europe) from Transformers Generation 2 came along and decided to test the sharpness of his bolt-shaped sword. One clean cut and one arm lands on the floor, it's as simple as that.

(Spoiler / explanation)
Actully, it was Zeruel's doing while Shinji faced him during a seemingly suicide mission to stop the 14th Angel from destroying the entire Geofront. Man, that was one hell of a fight and one of the most memorable moments of the NGE TV show, but then again, compared to earlier Angels this guy was almost invincible.

Anyway, that's right, we have an alternate arm-leftover. A nicely detailed one, showing a really clean cut of a razor-sharp blade. Not the best accessory for those with small inner anatomy tolerance, as this piece has a horizontal cross-section showing Eva's skin, biomass and bone. Nice level of details. 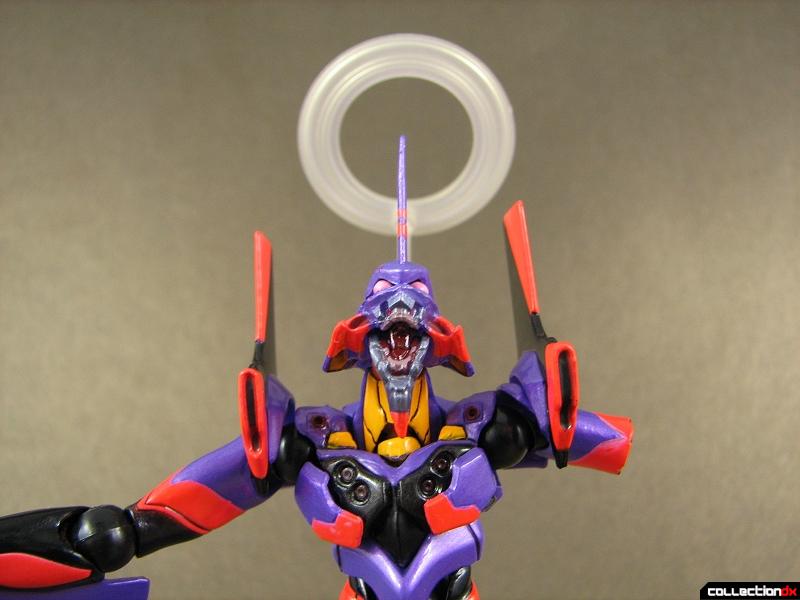 Eva didn't take the sudden change in its anatomy all that well and is, putting it mildly, very displeased. No Transformer will mess with the ultimate bio-weapon and live to tell the tale. This image show an accessory that's actually a three-piece. The halo is on a transparent arm that attaches on to an alternate plug capsule hatch that has a hinged post which allows the whole construction to swing back and forth. Personally I leave this out of the Berserk configuration as an Eva with holy attributes is simply a walking paradox to me... that and it's blocking the view of my other two Evas usually posed above it on stands. 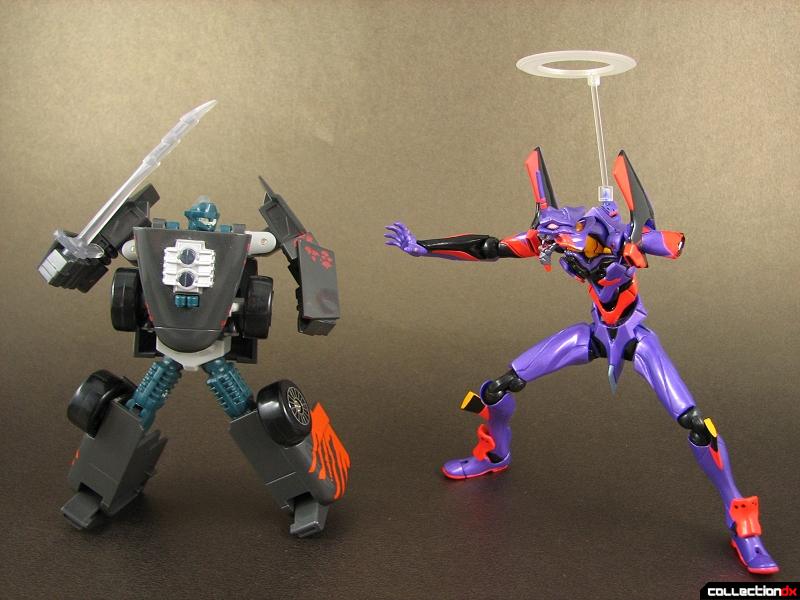 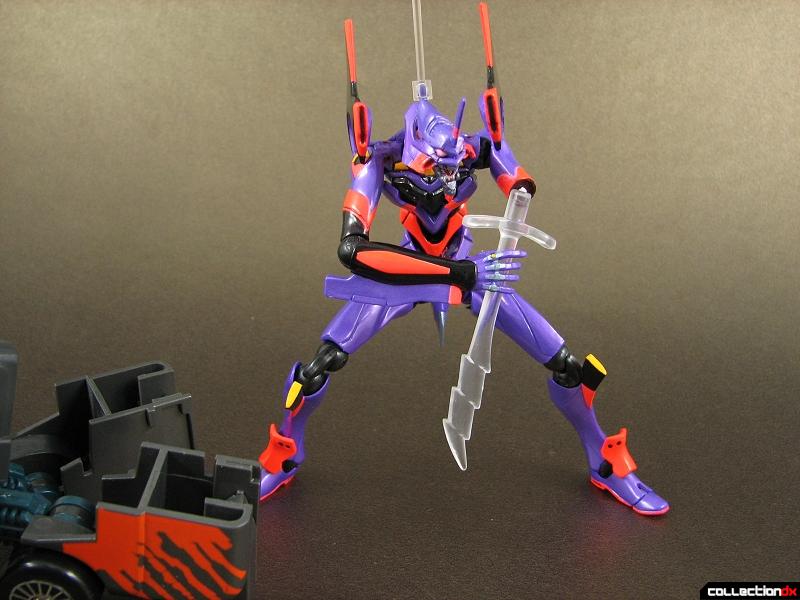 "Thought so! Now let's see if we can put this piece of junk to a better use..." 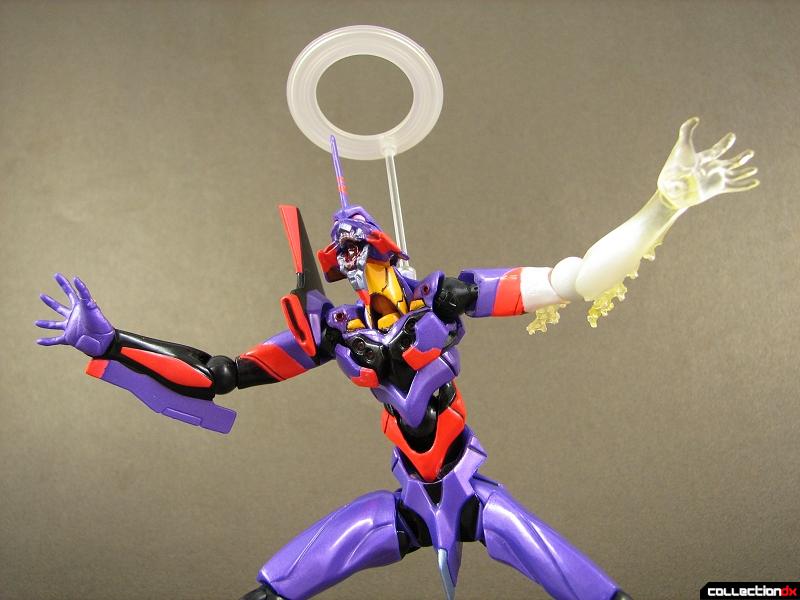 "I have ze arm baaaack! And itz bettah!!" 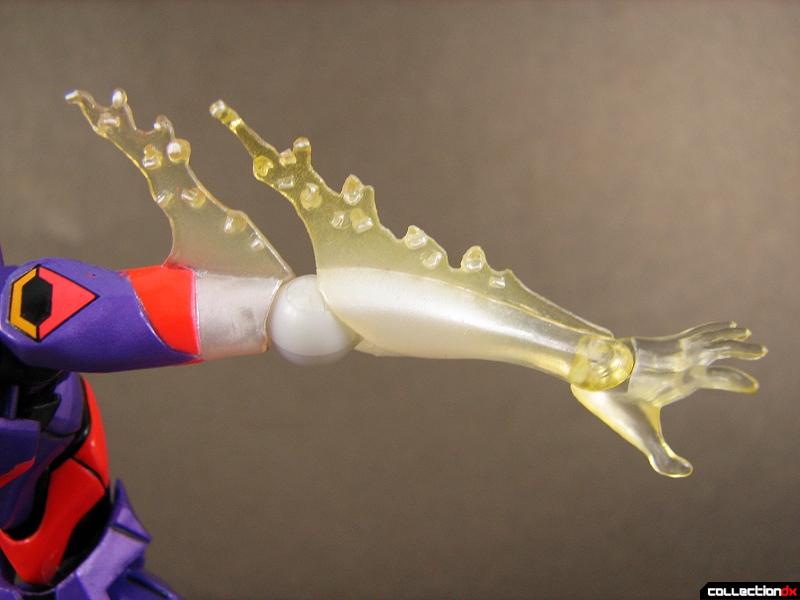 Actually, the new, angel-like arm is an interesting one. It's made out of an odd but neat mix of white and transparent plastic, with a slowly fading gradient in the middle of the forearm. The whole limb has also some sort of energy waves emanating from the arm (again, no Evangelion 2.0 knowledge here, I watched just the TV show). As a whole it looks very nice, though you can see that Kaiyodo won't be dishing out transparent revo-joints any time soon (white looks out of place, but a transparent one wouldn't hold for too long without cracking and braking down). 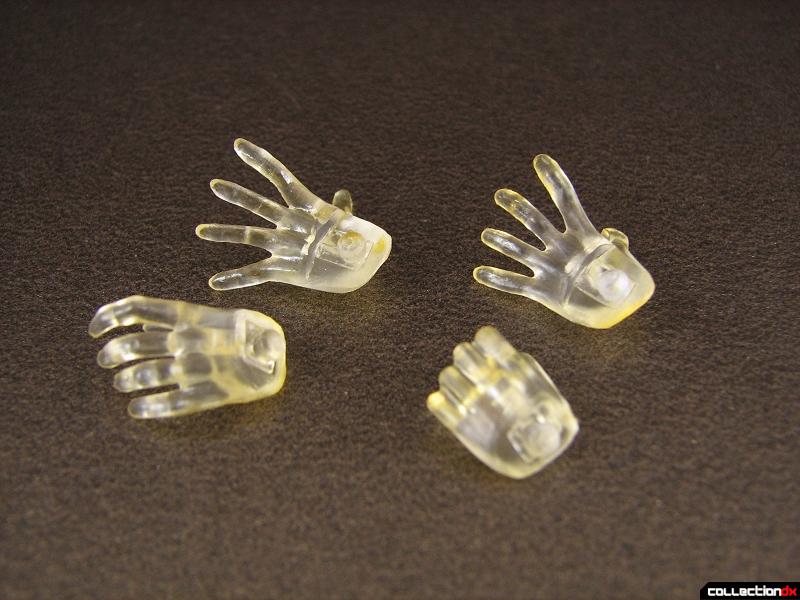 For this new arm we get four new hands that basically mirror the standard-issued manipulators, just with a cool transparent/weak yellow effect. Like all hands of this model these are two-piece and so far are very sturdy and tight. 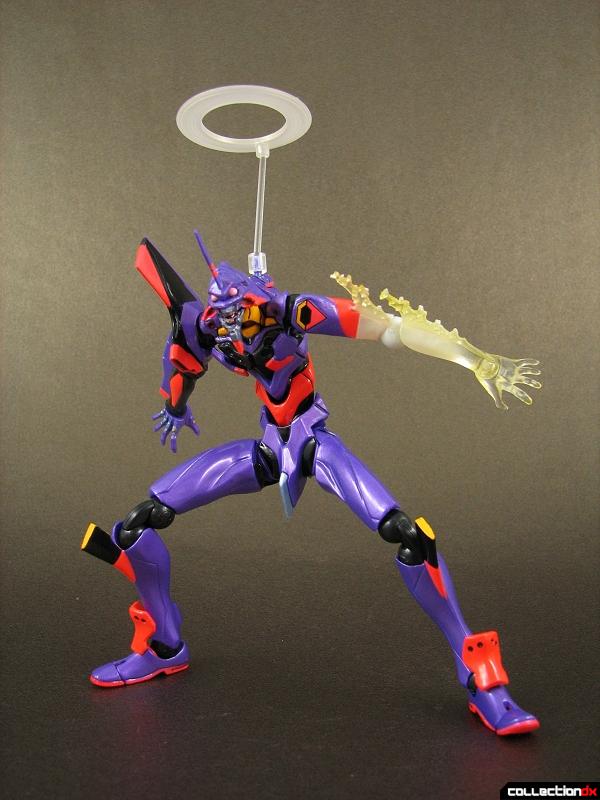 The good thing about the add-on pack is that it doesn't change the weight balance in the slightest, allowing us to access all the crazy poses of Evas we tested out since my review of standard 01. 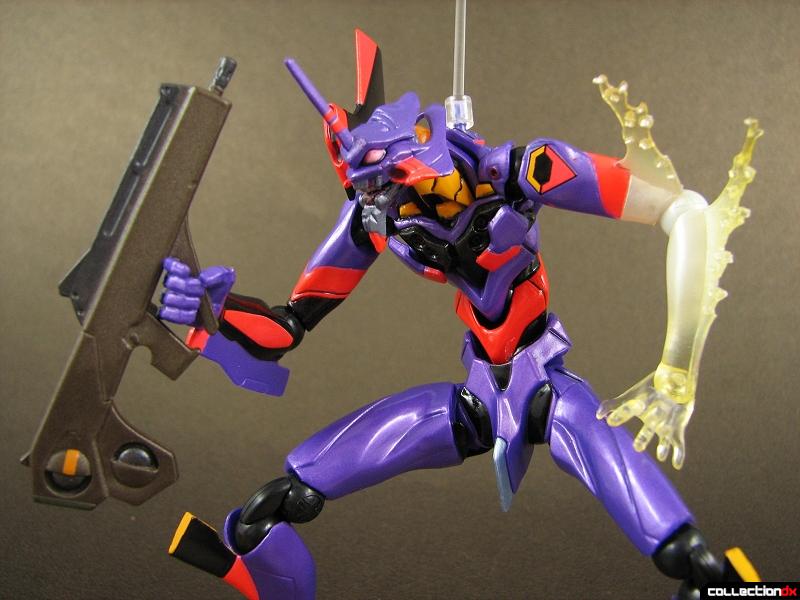 "LOL u kiddin me? Who needs a rifle when I have da Angel Hand! I don't need to shoot at that Zeruel bozo, I -eat- wiseguys like him for breakfast!" 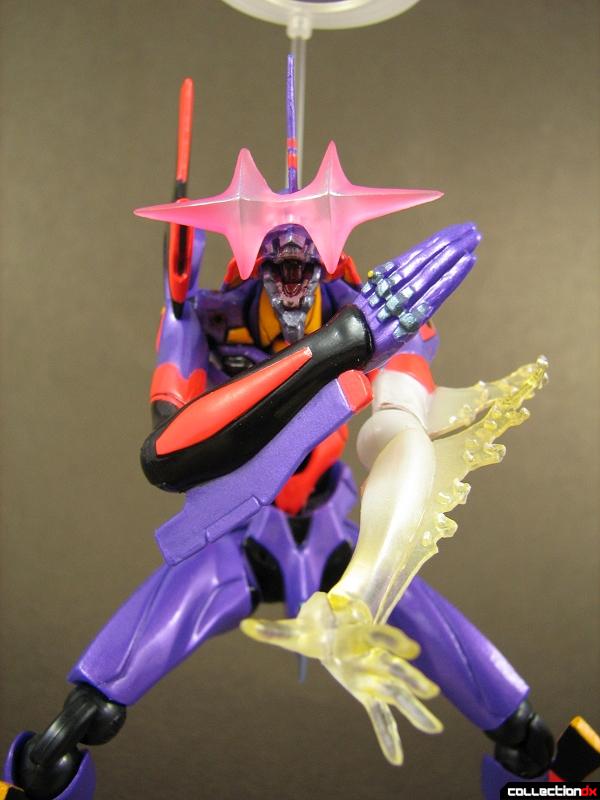 Remember that nasty attack that many Angels including Zeruel have? The one when their eyes light up and a cross-shapes explosion that tears ground till some 15-storeys below goes off? Now Test Type can do that too.

It kind of reminds me of Kamina's glasses, you simply put this on Eva's nose and hope it won't fall off: it just sits there, no pegs or docking mechanisms whatsoever. And you do have to put them in the right way, these are not symmetrical in vertical axis.

And the pose? Yeah...um, I was kind of inspired by Ultraman ^^ 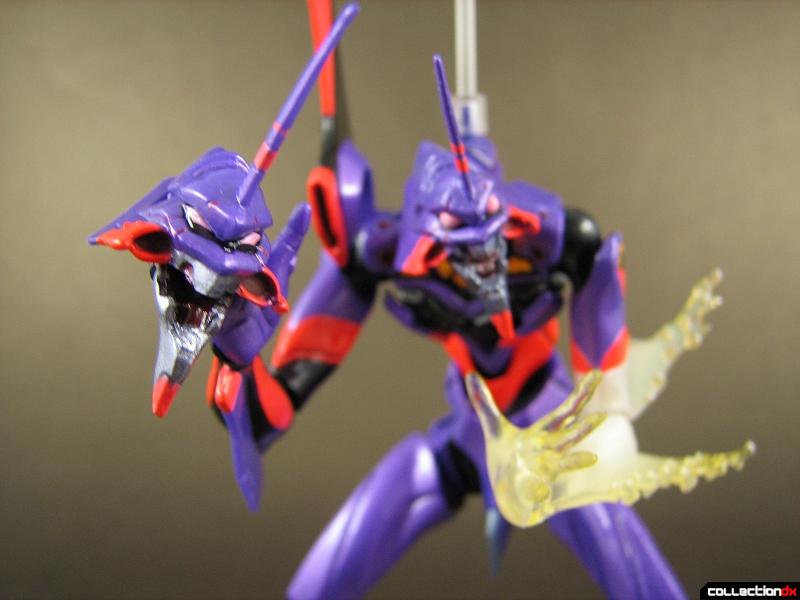 And now, the second head that goes with non-berserk form of this toy. It's an exact copy of 01 Standard's head minus colours and I usually keep it off the figure... or rather, I never actually managed to put it on. The double neck joint of this Eva is so tight at the spinning points that I was constantly afraid of snapping the whole neck in the process, so I finally gave up entirely. 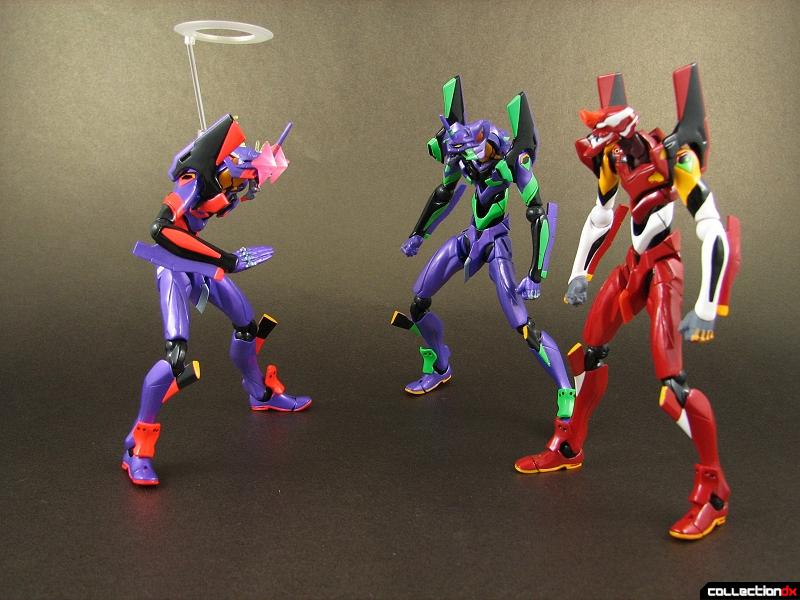 'Umm... so that's what I change into during that time of the month? Dude, is that awkward or what!" "Shudup and prepare to go down! All your S2 Engines are belong to me!" 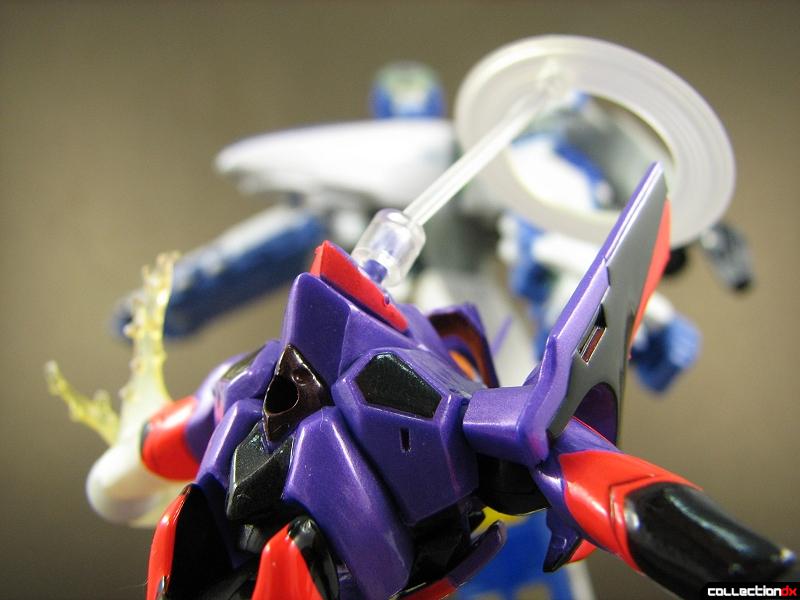 "Halt, you evil fiend! Your foul actions will continue no more for I am Rail Racer... I mean JRX... and I'm here to put a just end to this farse of a fight!" "Bring it on, Thomas! I already ate your God Fire-something buddy and a dessert is just what I'm looking for now!"

Hmm, supposing Transformers and Evangelion world-collide, shouldn't these to be of similar size? I wonder who'd win then... 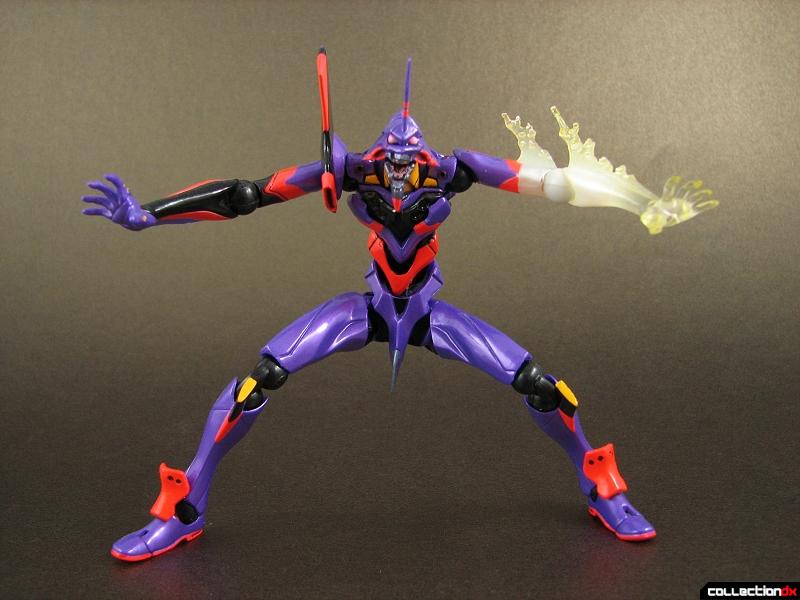 So.... conclusion time. It is a solid and well-executed toy for the most part, still not perfect, but has much tighter joints and the hands don't fall out at a drop of the hat like it happens sometimes in my Eva 01 Standard. Also it's interesting to notice that we got a new expansion pack consisting of new arm, new back-piece, second head and four new hands...all at the cost of only Eva's swords, with everything else left intact from the standard issue of the Violet Devil.

Now, the other question is whether is worth picking up. Depends. Mostly on two factors. A) do you have a normal Eva 01 already and B) Are you a fan of this mode.

In my case A) Check (got 01 and 02 for some 15 dollars each) and B) Not-check. I have nothing against Berserk Eva but the amount of the change is not satysfying enough for me to support a purchase idea. But that probably depends on you personal toy/ mecha fetish and the amount of love you harbour for Evangelions. I just wanted to have a sample of Evangelion mechas on my shelf and standard releases worked more than well for the purpose

Anyway, if you DO decide to snatch it, it should serve you for long years to come.

We'd like to thank Hobby Link Japan for providing us with this toy .

Oh, and one more thing. 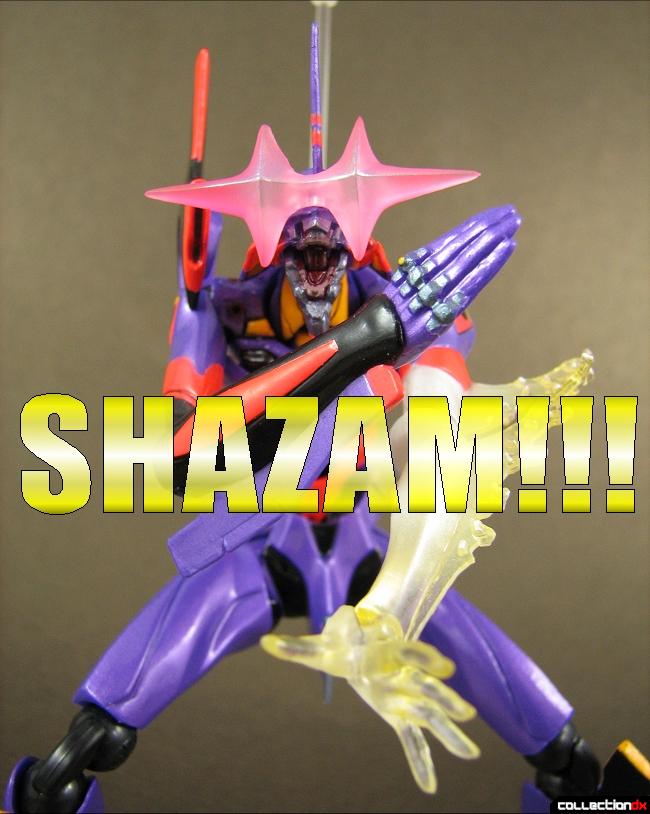 Man, I really wanna read this review and look at these pictures, but then it would totally spoil it for me when I FINALLY get to see 2.0-! I made that mistake with the series, and have regretted it ever since... >.<;

Man, Sizzle ALWAYS gets in the way, doesn't he? That toy has been chasing me down since I was a kid.