Energer Z is the protoype Mazinger Z, the first of Doctor Kabuto’s giant Robots to be powered by Photon Energy and be made out of Super Alloy or… CHO GOKIN. 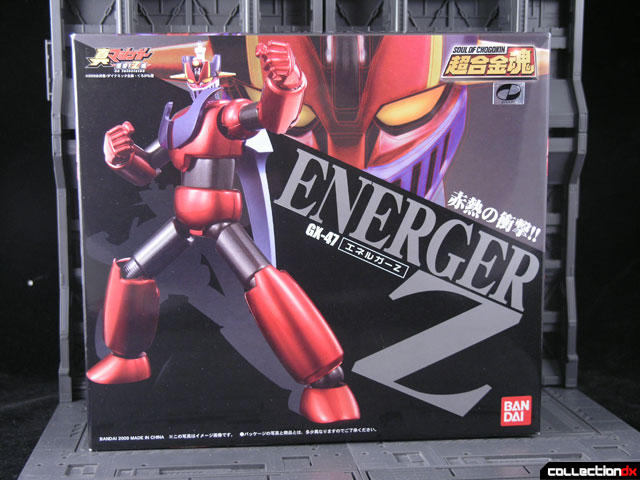 This version of Energer Z comes from the 2009 Shin Mazinger TV Series. Energer Z is available at HobbyLink Japan 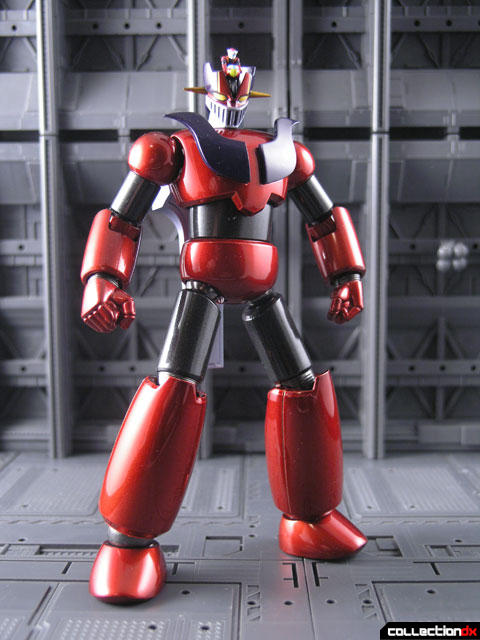 Piloted by Tetsuya Tsurugi, Energer Z fights both against and alongside Mazinger Z. It’s hard to explain. You’ll just have to watch.

The story may be confusing, but the toy is not. The toy is simply beautiful. 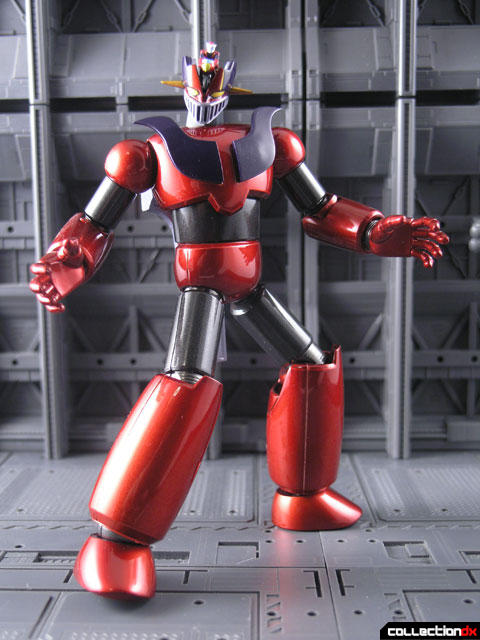 Sure, it’s basically the same as the GX-45, with some different paint and parts, but it is just so damn beautiful. The thing looks like a hot-rod.

The head is all new, and features not one but two different characters on motorcycles. In the series, Energer is piloted by both Tetsuya Tsurugi (Great Mazinger Pilot) and Koji’s dad, Kenzo Kabuto. Both motorcycles secure to a peg in the head, or to a spot on the display stand. 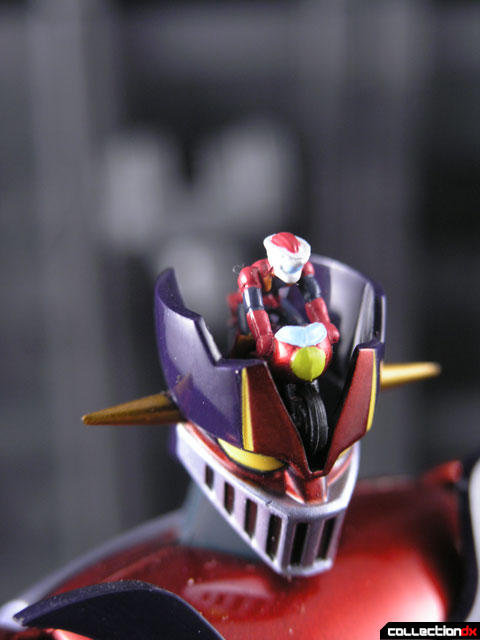 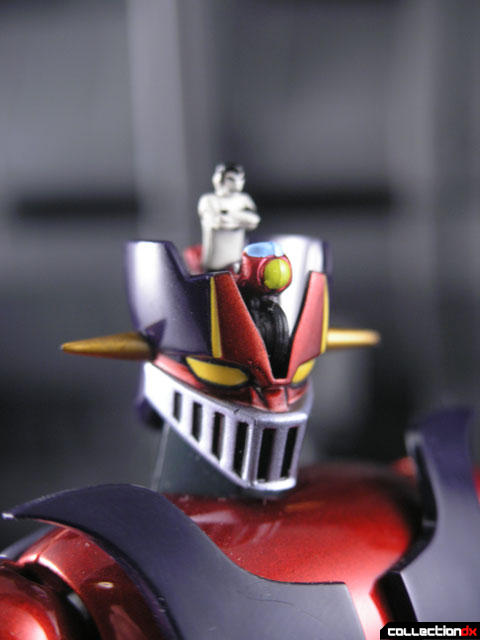 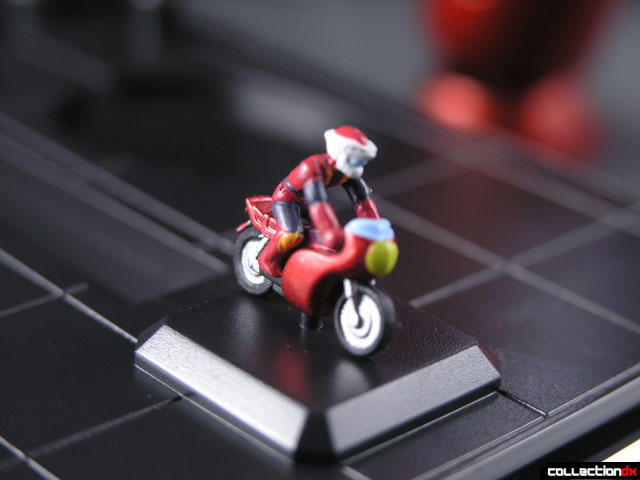 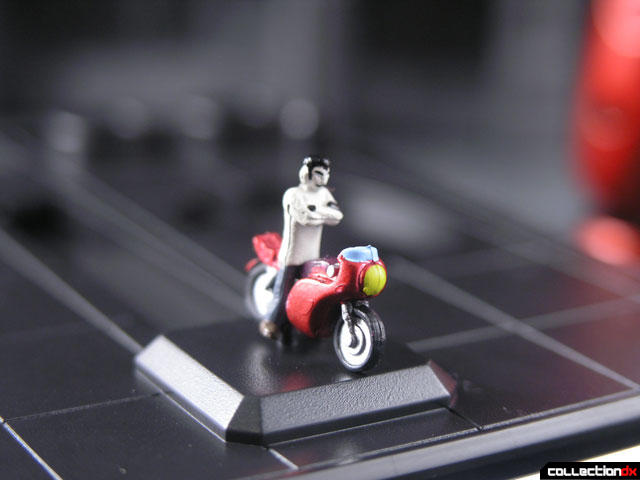 Other changes include a ramp on the back and different chest decoration. 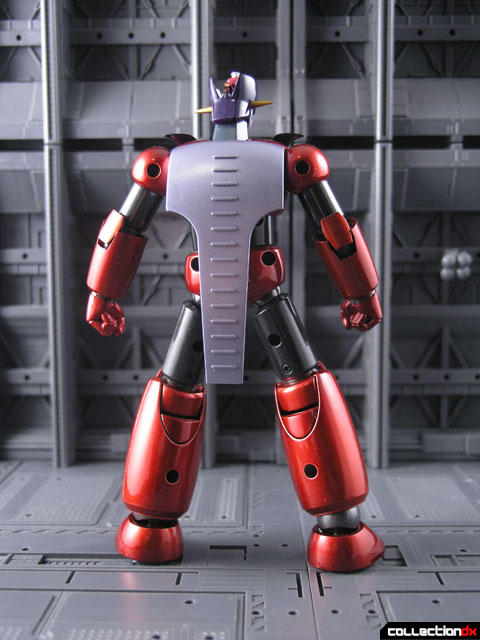 Other accessories include open and closed fists and rocket powered arm launchers. 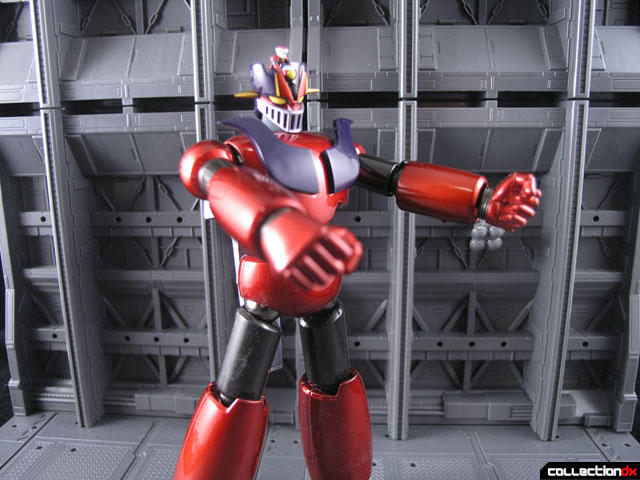 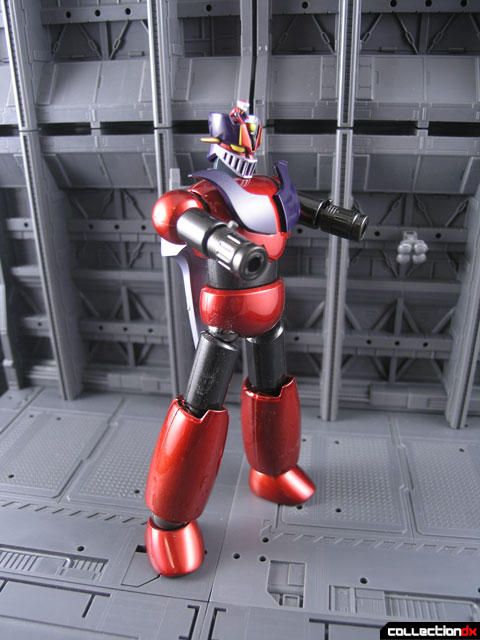 Now you may be thinking, didn’t we already get a Energer Z? Well, yes, we did, but that is an entirely different toy than this one. No parts are re-used between the two. The old one comes from a Manga, and this one comes from the Shin Mazinger TV Series. 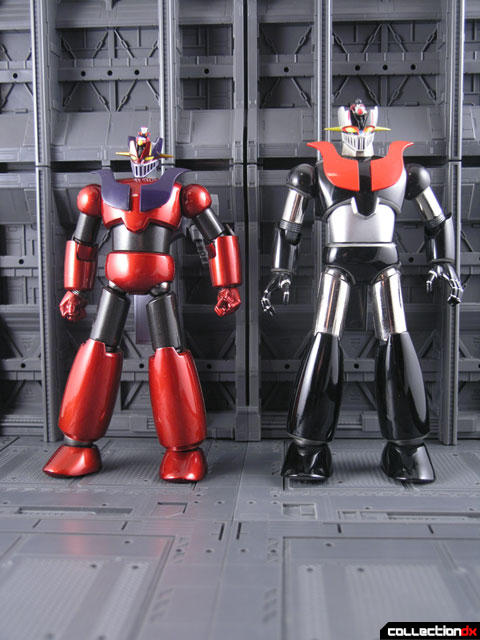 Energer Z may not do much, but he is super-poseable, loaded with metal, affordable and gorgeous. There’s no reason to not get him. 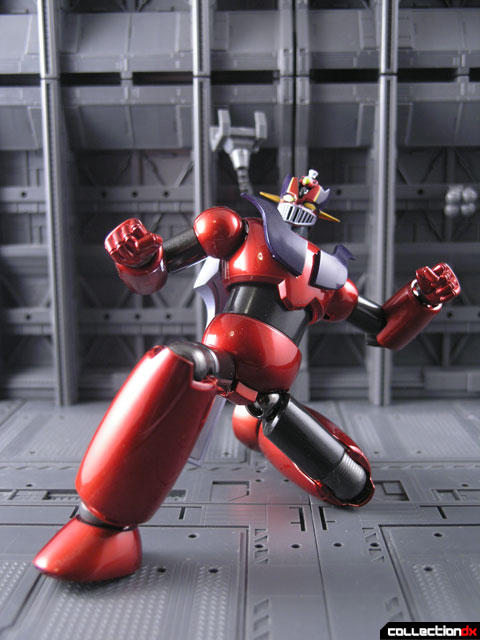 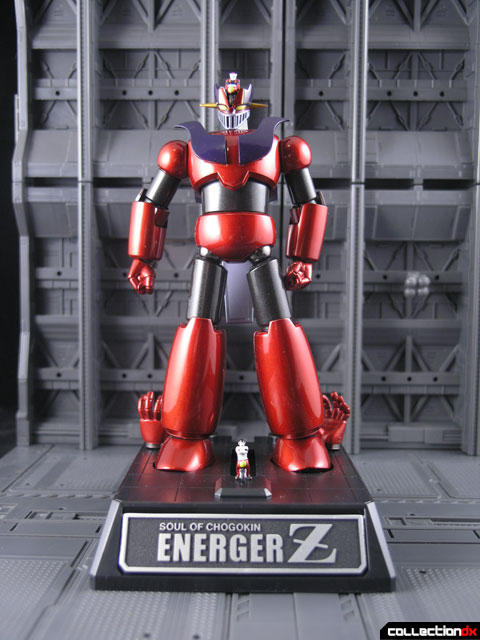 19 comments posted
Four new SOC's, all of which

Four new SOC's, all of which are mazingers. Why do they waste their time on four mazingers? Why not make two mazingers and two other things?

It sure look beautiful,The red and black paint looks awesome too :)

Do the motorcycles falls off easily like the GX-45 hover pilder?

They are very secure on mine.

Considering that I almost bought the GX-45 Mazinger to displace my frustration over the plastic legs and feet of my GX-49. This GX-47 is probably a good fix solution. Those legs and feet ARE diecast on this one right? I never thought we would have to start confirming this, but I'm wary of Bandai now.

Well Josh... I just opened mine and guess what? PLASTIC FEET. Wheeee! Another plastic foot-job from Bandai. Not hard to believe, but I have now purchased two S.O.C.'s that I was told had metal but were indeed plastic feet. Damn man?

Maybe you got a DX version or something. Take a look at that plastic sprue flash on the back bottom edge of the feet. Can you feel the temp. difference between the plastic/metal? I sure can.

Very tempting to pick up even if I'm not all that familiar with Energer Z. It's probably also worth mentioning that HLJ has it currently on sale for only $45 and change.

First off, unless the photos are off or my monitor settings suck, but that ain't no hot rod red. And that purple used on the chest/back and the dark grey on the upper limbs go horribly with it.

Plus the pilot scale looks totally awkward to me. Granted, this may be a problem with the animation model, not the toy...but Tetsuya looks huge up there, on his bike. His body is almost the size of the entire Hover Pilder on Maz Z (that's assuming the two robots are the same size).

Totally agree! The pilot/motorcycle scale is terrible on this particular figure. The color sucks too, taken that the total screen time spent as a "RED Energer" in the anime is less than two minutes. That's why I purchased a second set of Shin Mazinger and Energer and switched the head and chest plates. Now I have an Energer that matches the one in the series...

looking at the Energer Z in front of me here and in pictures, I gotta say the pictures dont do justice for the color, The color is a deep metallic wine red..sort of what you find on some hot rods, hence the descriptive Josh used. I was a little put off by the purple as Sanjeev said but I guess it doesnt bother me as much now since Ive been looking at it for months. That said at 45 bux, its a bargain!

Thanks for the additional info about the color. I once had Aoshima's deep metallic red New Getter 1, and it was notoriously tough to photograph. That shade of red just kept looking washed out in the pics. Eh well!

The weird scale issue still bothers me, though...

Anyway, that said, $45 is pretty damn amazing! Especially seeing as how the pre-importation retail is closer to $75! ;)

It is a lot different when you have it up close and personal. I picked it up cheap via AmiAmi, and even my wife likes it. The color may be a tad strange for a Super Robot, but it works real well. I think the only plastic may be the head and the hands, and even with the motocycle being too big, it is a fresh take on a classical character.

I have the GX-01R and now this one, and I don´t think I will ever need another Mazinger.

Yeah I've been lucky with my Mazinger choices and that I haven't got a 'double' of the same character. I've got the GX-01, GX-01E and GX-45A.. three the same, but different Mazingers.

One day when I have the money and space, i'll try collect every variation, but for now I'm happy. I dare say there shouldn't be need for another Mazinger SOC release for awhile.

I was actually at the last screen before checking out at HLJ for this guy. Hard to beat the price, but then I realized I'd want all the other more expensive SoC as well! I think I'll stick with Revoltech for now, it's all I can afford on a poor teacher's salary!

I picked up my energer off my shelf today and noticed some scratches on the folding panels on his legs I was wondering how it got them so I was looking at the legs after bending the knee to the point where I collapsed the panel I discovered doing so scratches the panel and the scratches are rather deep from VERY gentle hadling of the figure now even though it's not very noticeable it does bother me I wonder if GX-45/49/51/52 have this problem as well?

I had the exact same issue with my Energer Z. I have the GX-45 and have not had any scratches occur. I think it may have to do with the screws in the legs not going in as deep on the Energer Z as they do on the Mazinger Z.

Thankfully I got mine form Hobby Link Japan and I noticed the scratches almost immediately after the first time I bent the legs. I e-mailed Hobby Link and they payed to have it shipped back and sent it to Bandai for repair. I finally got it back this last week. I have not bent the legs again though as the screws still look like they are not as deep as the Mazinger Z's.

I took a picture to show Hobby Link:

I bought one for peanuts, damn it's nice in person, It has the paint finish of a much more expensive toy.

I was really disappointed with this guy. The colors are much darker than I thought they were going to be and I was expecting something a little more vibrant and colorful.

I fired his fist once and the mechanism is doing something weird where the fist/arm won't lock into place again. I ended up having to switch it out with one of the normal arms.

The ramp on his back has fallen off about 20 times already with only some very light handling. I was going mad between the ramp and his buddy Raideen having something fall or collapse each time I breathed on him in the display shelf.