If I had to make a wager, I would guess that JoJo's Bizarre Adventure is probably something most people have heard of, but have had little exposure to. The story is made up of fairly self contained arcs about the global adventures of different members belonging to the Joestar family bloodline. Moving across five generations and then some, the comic has been running in serialization for near on 27 years.

Originally debuting in Weekly Shonen Jump alongside titles like Dragonball and Saint Seiya, JoJo has not reached the same heights on English speaking shores (for a number of reasons probably), with only the third arc of the manga, an OVA series (also based on Part 3,) and Playstation and Dreamcast ports of Capcom's JJBA fighting game (again, also based on Part 3) receiving official English translations.

In fact, a lot of people's JoJo familiarity may stem from an old flash animation (specifically the last selection, be aware that link features sound) and subsequent internet memes about one of the series' most iconic and influential villains, the vampire DIO.

It's possible things are changing though. The recent anime adaptation has just hit season 3 (no prizes for guessing which arc it covers) and streaming site Crunchyroll has begun broadcasting the series, including the first seasons, outside of Japan. Furthermore, the most recent video game, a spiritual successor of sorts to the original fighting game that features characters from every Jojo up through the current Part 8 is also getting an English release on the Playstation Network within the next month.

There are a lot of factors that make the series a tough sell; the use of "bizarre" is justified, and it's very unlike its Jump peers, mixing together equal parts violence with references to prog rock and high fashion. Above all, its length can be daunting; it's the second longest running comic in the Jump family, with the first being 1976's Kochikame. Even so, a little more exposure can never hurt, so let's look at some toys.

There have never been a wide variety of choices available to JoJo fans looking for their toy fix. Kotobukiya produced a line of action figures back in the 90s, but for something a little more modern, the Super Action Statue line by Medicos Entertainment is the only game in town. Where better to start looking at this line than with the charismatic bloodsucker named after Ronnie James Dio and the band bearing his name? 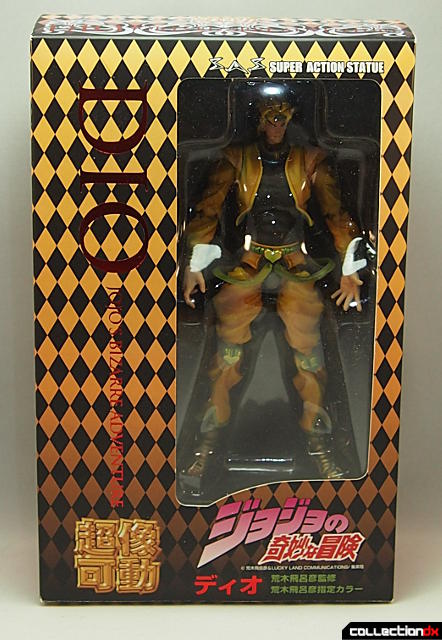 Once a poor English commoner by the name of Dio Brando, DIO comes in a stylish windowed box with his name and JoJo's Bizarre Adventure embossed in metallic red. The box also mentions that both the figure's sculpt and color scheme were supervised by JoJo creator Hirohiko Araki.

On first examination, DIO looks really great. The sculpt is dead on, and there's a lot of shading and blending going on in what looks like a really simple color scheme. 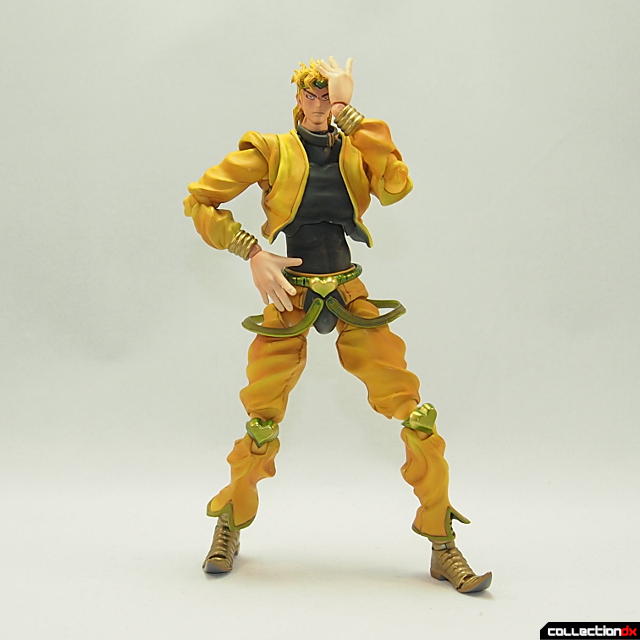 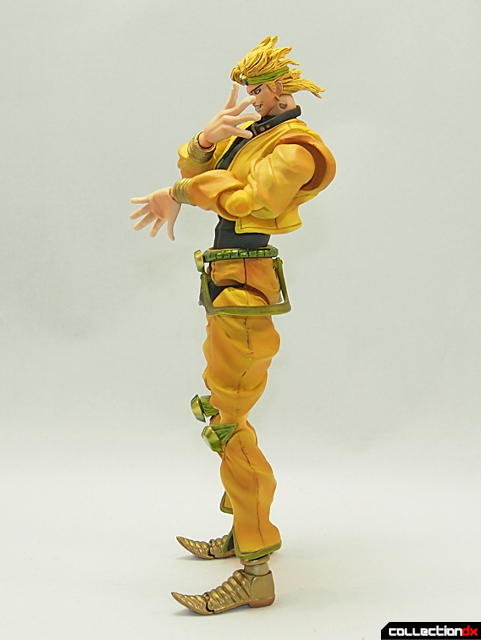 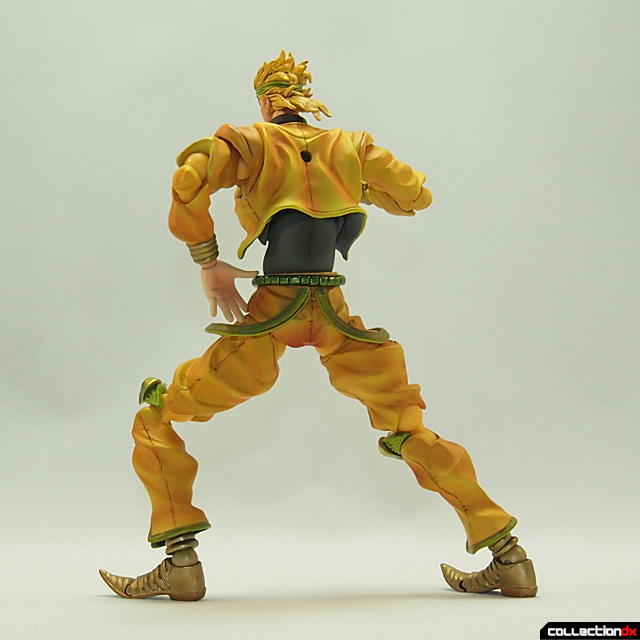 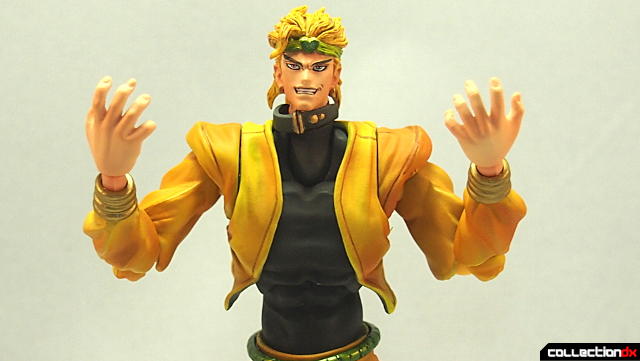 
Poseability isn't anything amazing, but it's passable. One of the selling points of this series are the joints, which are lightweight yet sturdy due to being made out of nylon. It seems that Medicos prioritized the ability of the figures in this line to be able to pull off it most of their iconic poses. 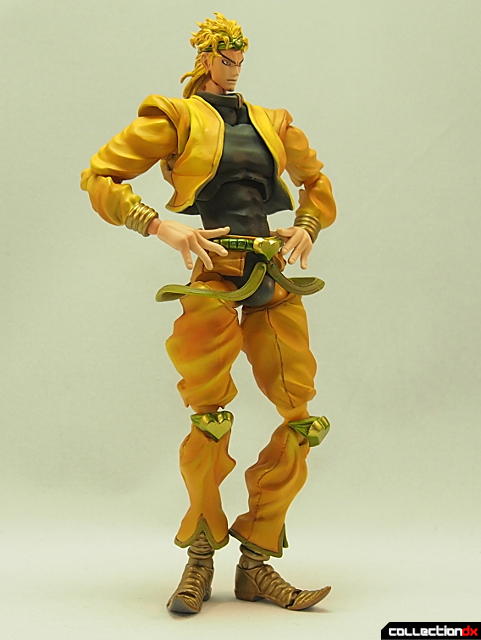 The result is that the limbs, and even the position of the joints aren't symmetrical, so the figure ends up looking great in some poses and off in others. His legs are slightly different lengths, so it can be hard to get a neutral pose. With that said, there are very few neutral poses in JoJo's Bizarre Adventure so it kind of works out. Generally speaking though, the range of articulation on these figures was kind of limited in the early releases and improved as the line went on. 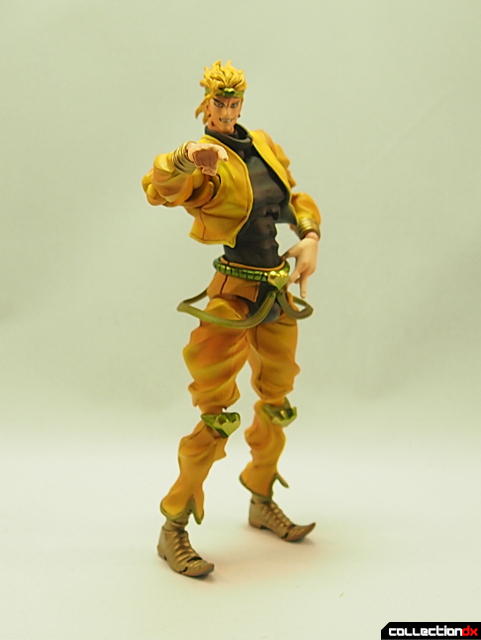 The importance of pointing at your opponent is the first thing you learn in JOJO 101. 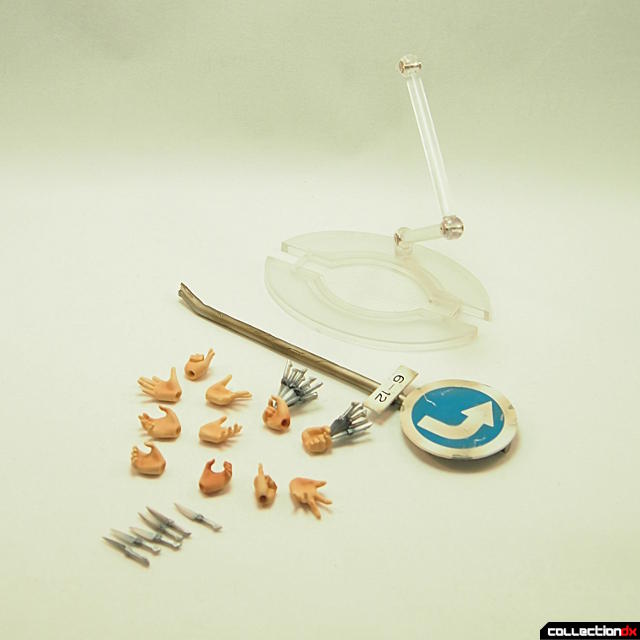 He also comes with a lot of accessories, which is an area of this line that I often feel is pretty lacking.
The stand has a swivel arm and uses a standard 3mm peg, and it has the series logo etched in relief on the base. There are some more tricks to it, but those won't come into play until a later review. 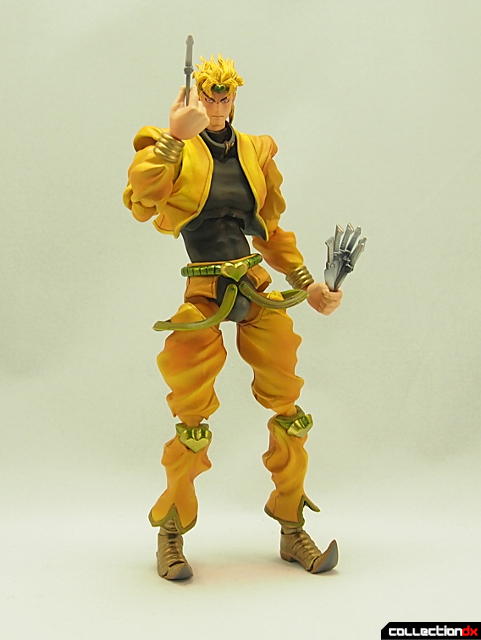 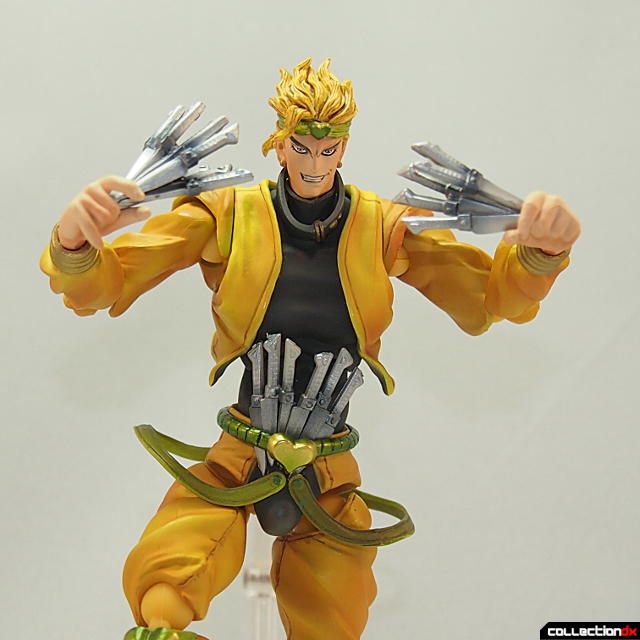 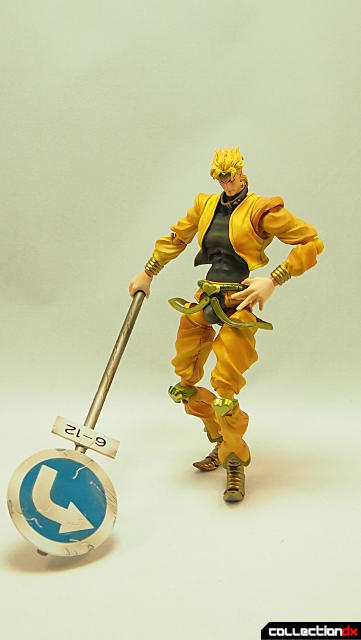 Sometimes you have to make do with what's on hand when carrying out an unplanned beheading. Please first consult your local traffic code to see if this is legal in your area.


Things start to come apart a little upon further inspection. This line is no stranger to QC problems, unfortunately. The first thing I noticed was that there was paint damage on one of DIO's extra heads, with some pretty significant chipping on his chin and cheek. 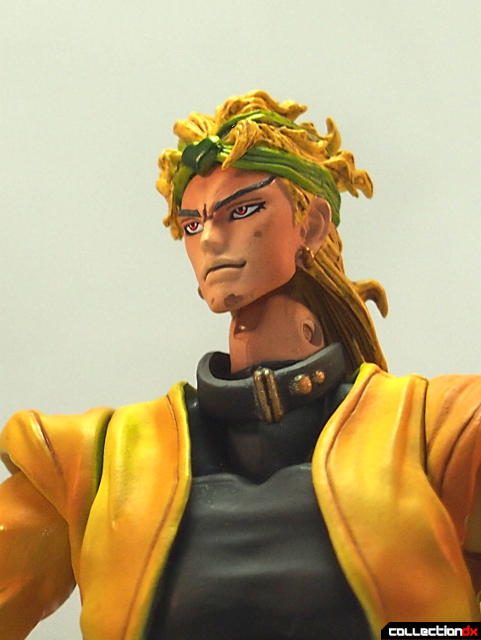 After that, I found that the swivel hinges on both toes were broken out of the box. The joint on the left foot is just hanging on, and it's super loose. On the right foot the joint looks like it's been crushed, so it can barely move at all. Does this make it hard for him to stand up? Incredibly.

There are also some pretty rough looking gaps in the seams of his legs and crotch. 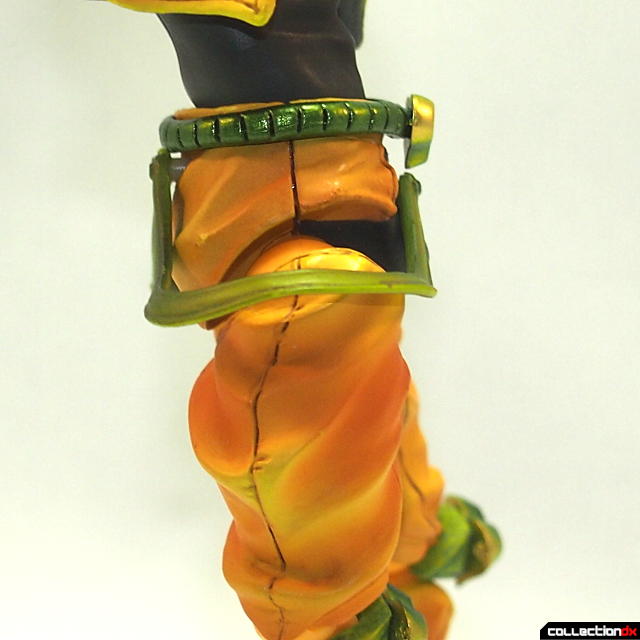 And then I have some issues with the joints themselves. There's a lot of flex, even in the larger knee and elbow joints, and in trying to rotate them the joints often end up bending in directions that they're not supposed to go. This is exacerbated on other SAS figures that I have, where the jounts are really bendy. In some cases it really feels like a struggle to get into some poses. Nylon, it turns out, is maybe not the best material to use in this case, or maybe it's just Medicos's construction.

The SAS line is sized and priced similarly to action figures from Bandai and Max Factory, but it doesn't quite have the same level of polish. Just based on my own experiences, I'd say that people new to collecting this line should expect some paint issues as the norm. Furthermore Medicos is a much smaller company, and smaller production runs have led to some pretty high aftermarket prices, which makes it sting even more. Thankfully, DIO has been reissued a couple times now, and the days of $100+ DIO's are gone. He can still be easily found new for around his original retail price.

To really shine though, DIO needs his buddy. Since I'm only happy when reviewing toys lines whose abbreviations create abrupt exclamations that can be said in disdain or irritation, let's begin a new journey. 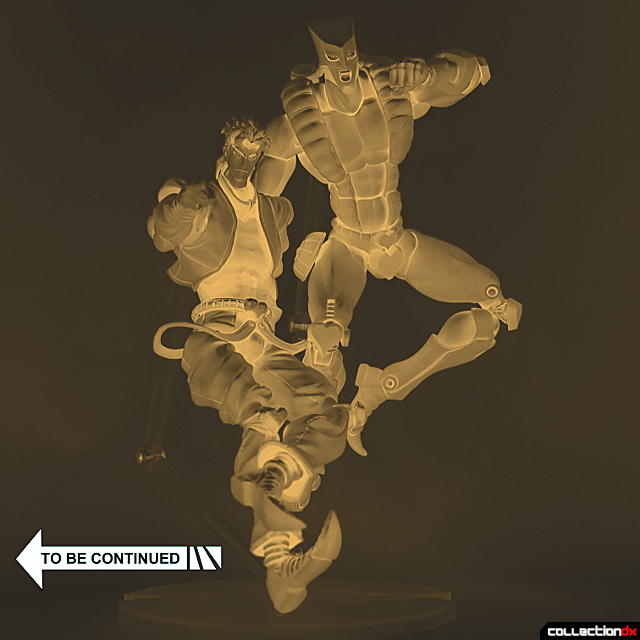 When I saw the picture on the front page of CDX he seemed very very yellow. After seeing the review he doesn't seem so yellow.