So when Ken offered up the Broken version of Pegasus Seiya I initially thought I would pass on it as I already had the Appendix for the Pegasus Cloth (Final Version) which gave you pieces to display the cloth busted up. But Ken insisted I give it a try and I am glad I did. It turns out for the Saint Cloth Myth collector it really helps ties things together thematically. 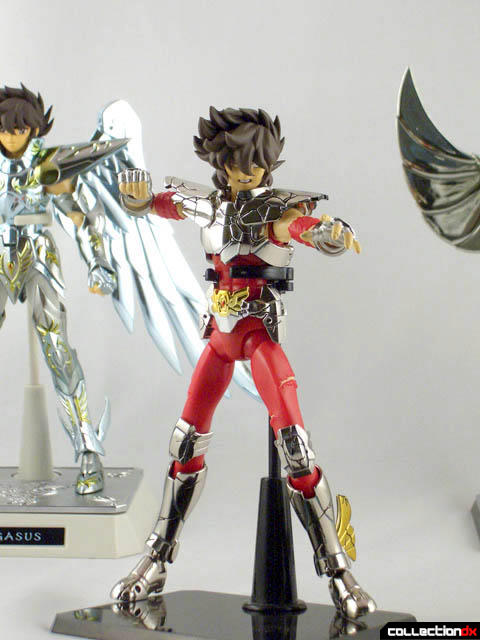 This is the Pegasus Cloth from the end of the TV series and very beginning of the Hades Saga – Sanctuary Arc OAV's before being repaired. 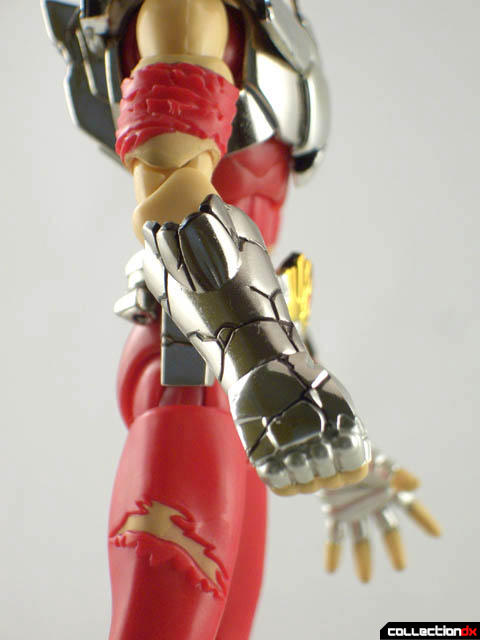 Saint Seiya is basically an Eastern take on the Greek and Roman mythology. The story is original but uses the Greek/Roman pantheon of Gods to tell it's tale. Each god in the Saint Seiya universe has “Holy Warriors” that don mystic armor and fight on their behalf. Poseidon has his Marina Generals, Hades has his Specters and Athena has Saints. 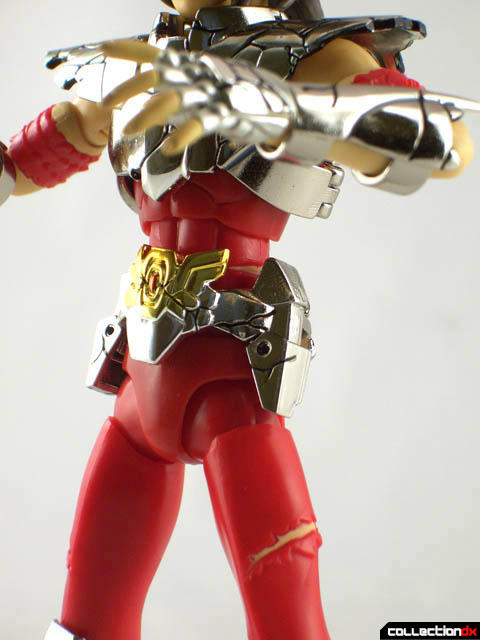 Athena's Saints are tiered in three levels of strength; Bronze (the weakest), Silver and Gold (the strongest.) The shows main characters are 5 Bronze Saints (Pegasus Seiya, Cygnus Hyoga, Andromeda Shun, Phoenix Ikki and Dragon Shiryu) have their cloths damaged and then repaired early on in the series by more powerful Saints giving them an advantage every time they face odds that would normally be beyond their capabilities. 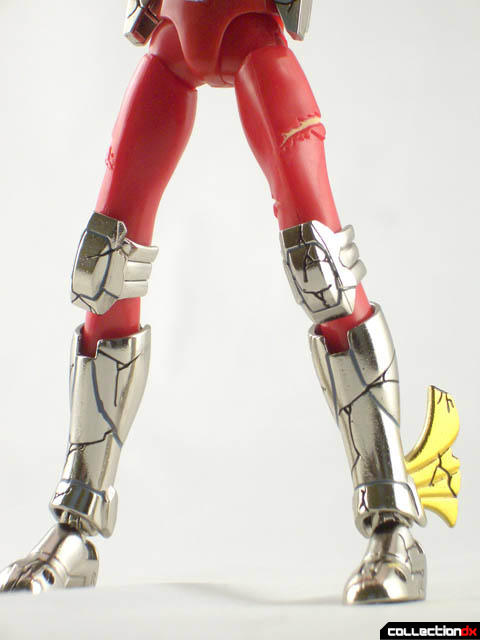 This cycle of damage and repair is one of the central plots of the series, ultimately evolving their Cloths to a Divine level, or God Cloths if you will. So as a collector who displays his SCM's thematically I found that Broken Seiya tied things together very nicely. 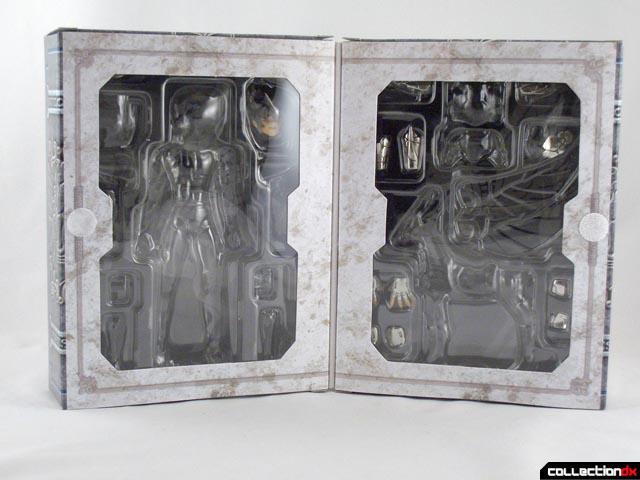 The box is the standard Saint Cloth Myth book style package. It's almost identical to the previous Pegasus Cloth release but it's a much darker gray color scheme instead of the lighter gray of previous Bronz Saint releases. 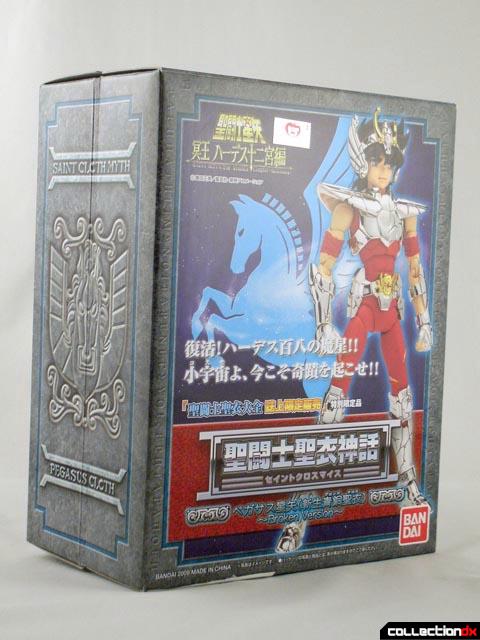 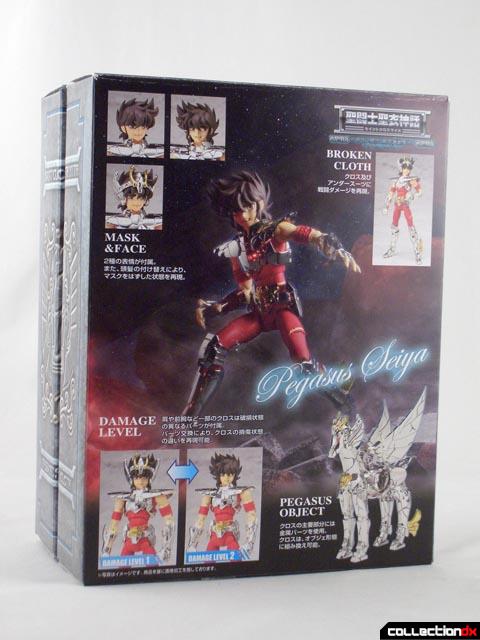 The figure itself is similar to a Type-3 body but appears to be a new sculpt (would that make it a Type-4 body?) with much more detail in the abdomen as well as torn clothing in the legs. 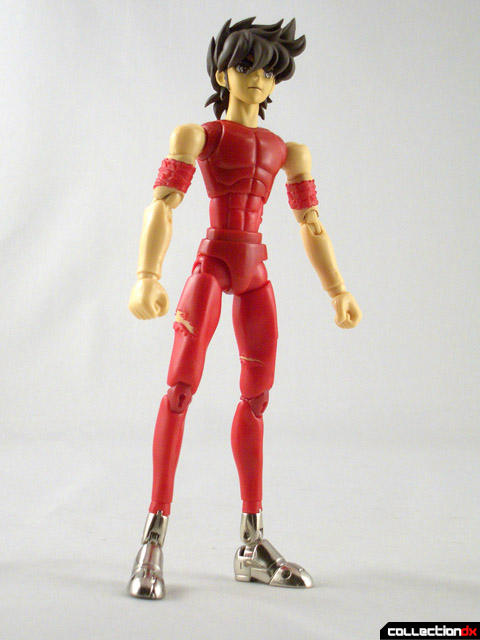 The body also appears to have had it's waste articulation limited a bit, which may actually be a good thing as some Saint Cloth Myth get really loose in the waist after posing a few times. Which can make standing up straight an issue for those with less armor around the torso. 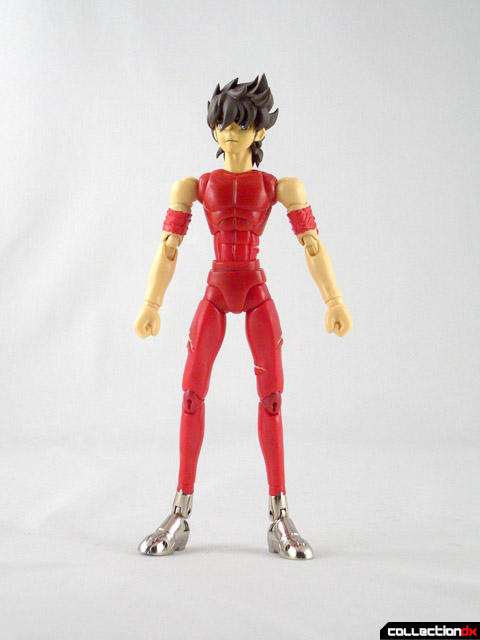 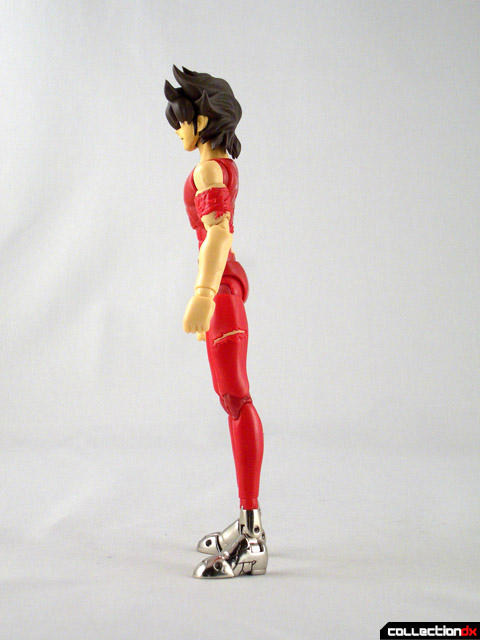 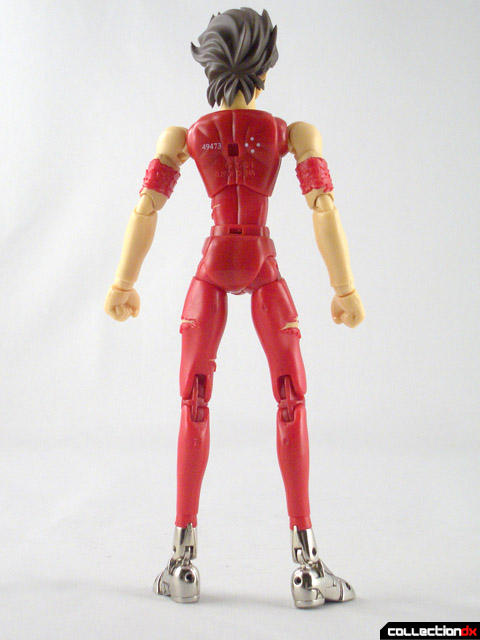 Being the Pegasus Cloth the armor forms an object or Statue and this release does that just fine. 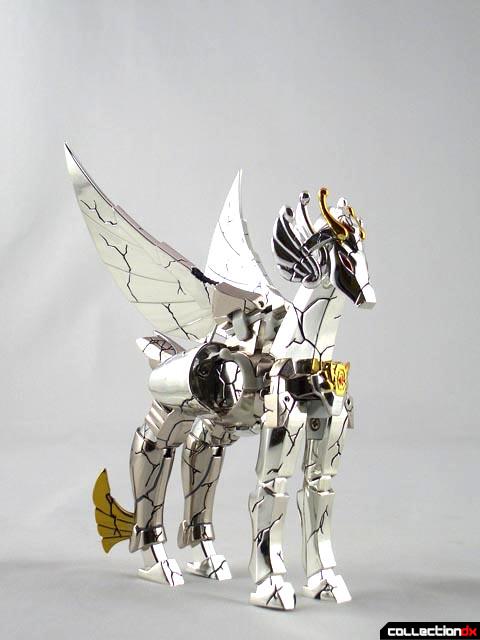 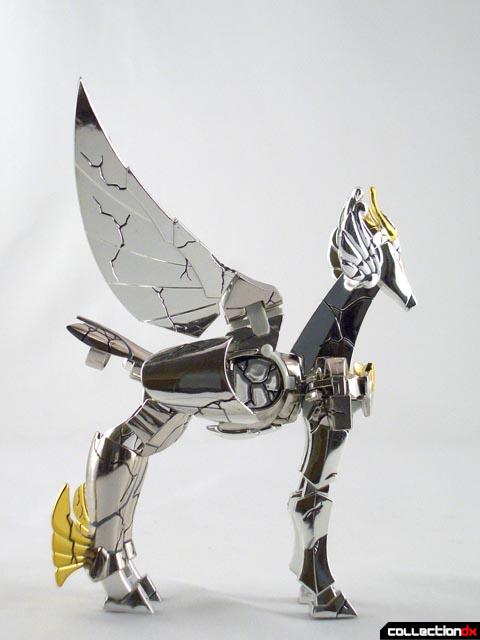 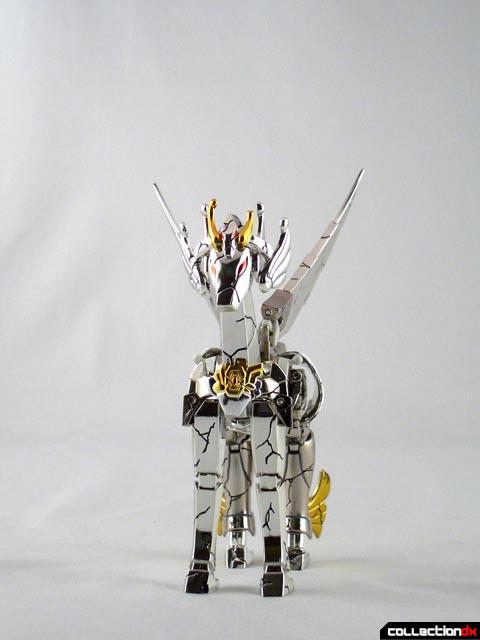 The Cloth itself is mainly plastic with just the main part of the chest plate and leg/knee armor being diecast metal and the rest of the outfit is all plastic.

They include 2 levels of damage. Level 1 and Level 2. Most of the pictures here feature the level 2 damage giving him the really busted up look. 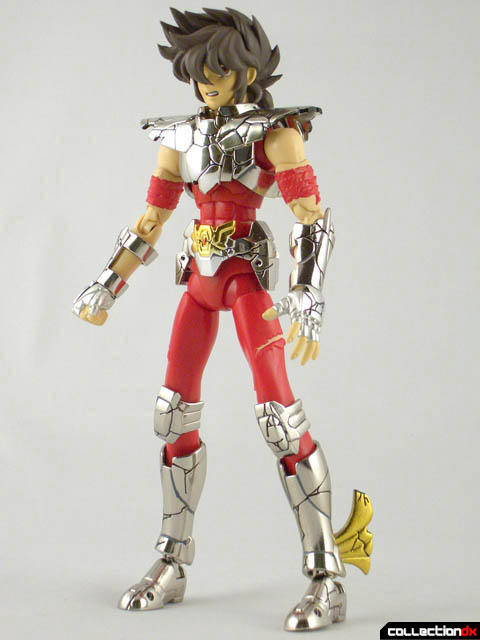 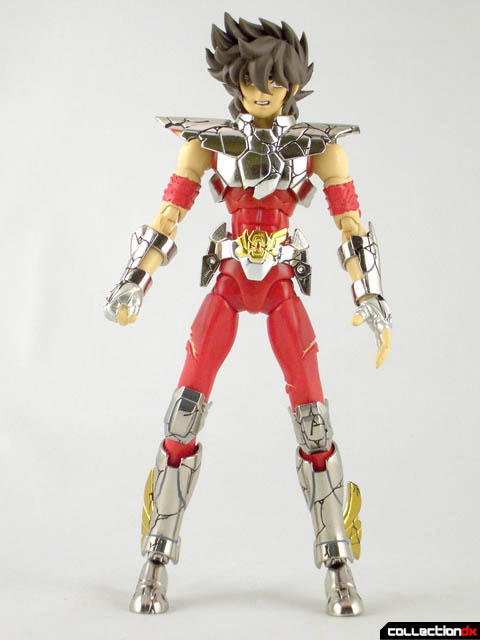 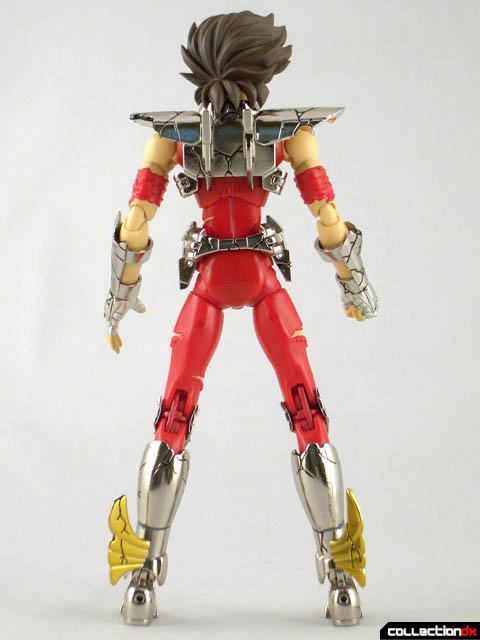 I must say, once I got him out and set him up I kind of “got it” and saw how he thematically ties all the different Seiya releases together. 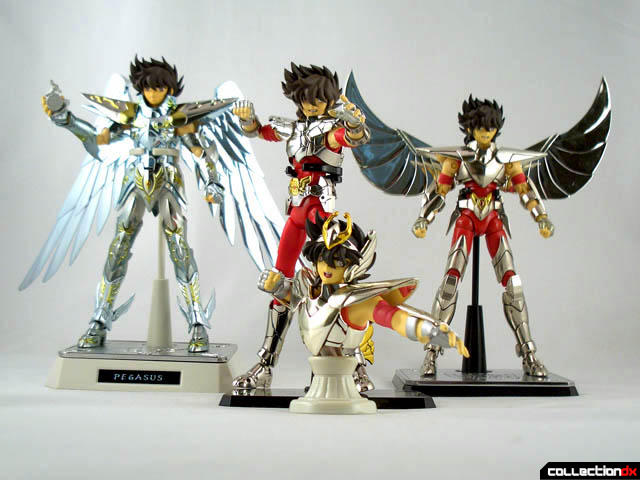 This was initially a Japanese magazine mail-in and included a metal plate for a display stand but sellers in Hong Kong are given the chance to sell the limited Japanese releases in small quantities or in this case without the metal plate. 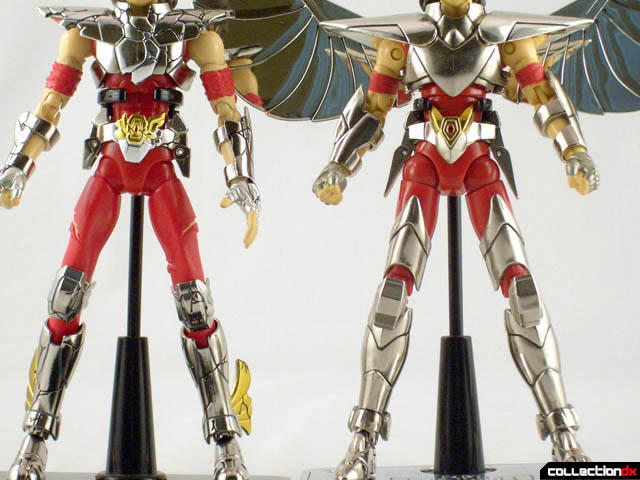 For general collectors I'm of the opinion it's a pass as it's a bit too “inside baseball” so to speak. BUT, if you are a Saint Cloth Myth fan grab it while you can, it makes a nice addition to the collection and ties things together nicely.. 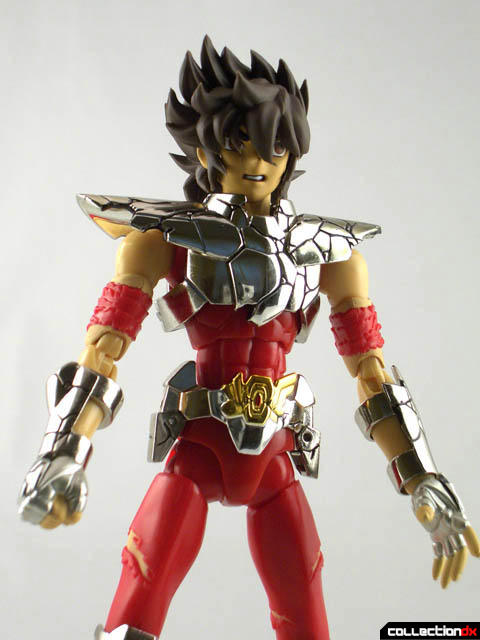 HD video embedded below for your entertainment...

That face sculpt is really...something.

EDIT: Actually watching the video it seems like it looks a lot better "in person." In still photos, Seiya's expression just looks kinda...well...special.