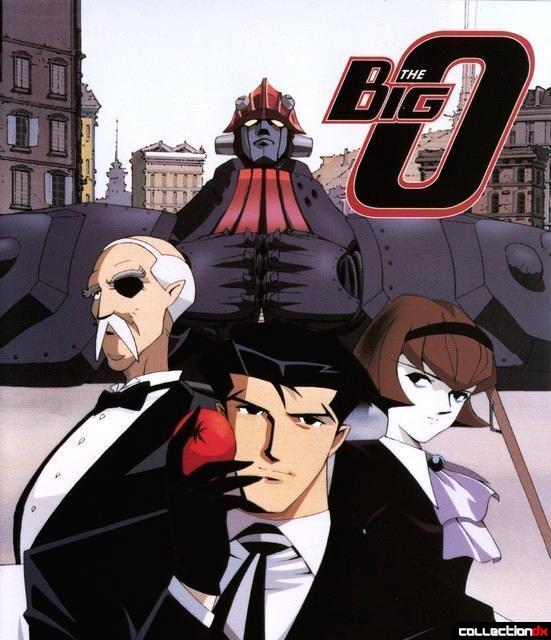 Today I will be reviewing Bandai's GX-48 Soul of Chogokin, "THE BIG O". You can pick this item up at Big Bad Toy Store or just click on the eBay links at the bottom of the page for a direct link to the item reviewed today.

The Big O arrives to you in the standard, aesthetically pleasing SOC box you see below. Inside the box is The Big O in Styrofoam and all accessories in plastic trays (not shown). 20bet telecharger ios Honestly, it is just what you would expect when opening a high-end modern chogokin collectible. 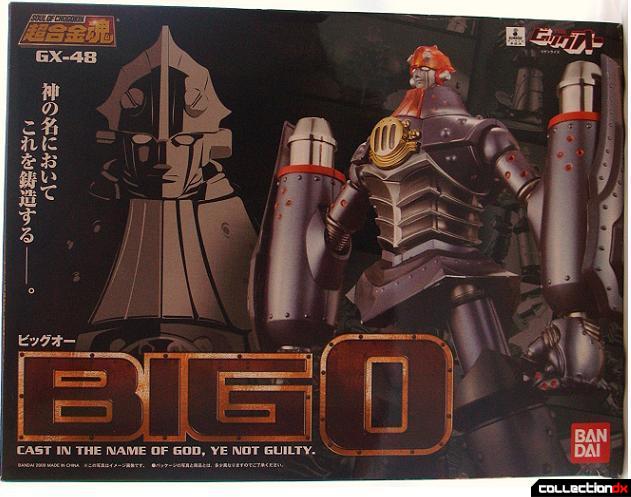 So, what's included in the box you ask? 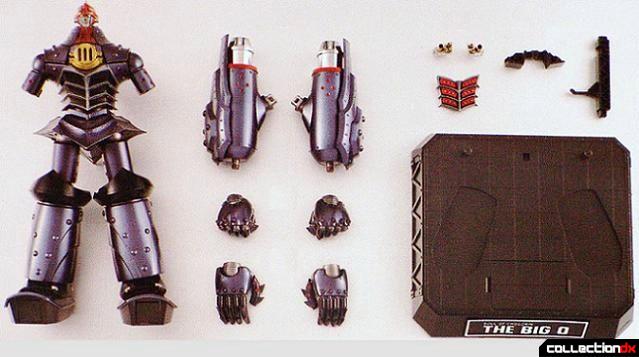 After some very minor assembly, you are rewarded with the impressive figure you see below 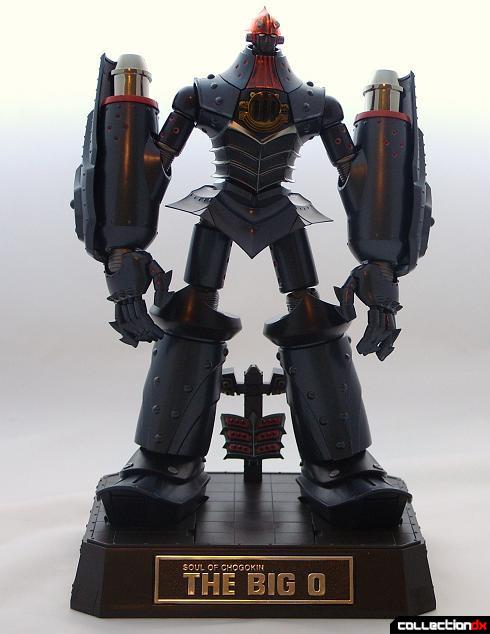 Big O is made from a mixture of high-quality plastics and die-cast metal, weighing in at a hefty 1 lb 4 oz. For those of you that are hardcore die-cast fans, you can find plenty of the good stuff in the chest, torso, upper arms, thighs, and the bottom of the feet. Also, let's not forget that die-cast is used throughout the figure, in the joints, etc...

Not only is Big O heavy, but he is also pretty tall at nearly 9 inches from head to toe. Here you see a shot of Big O with the GX-01R SOC Mazinger Z. You can really see the scale of his massive size in this comparison photo. 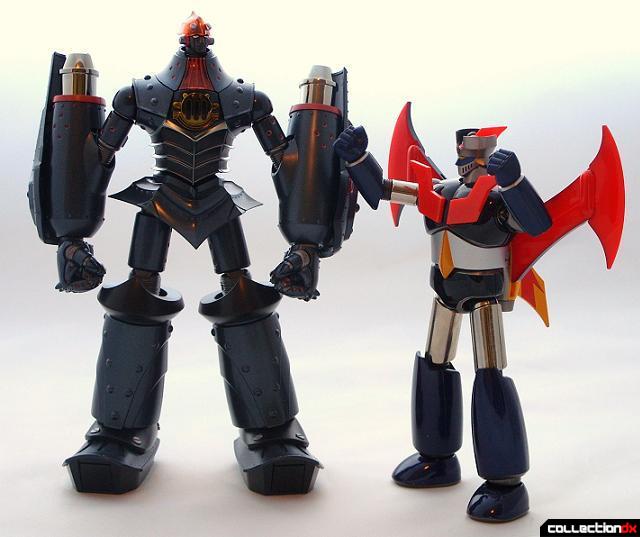 In the next three photos, I would like to take a brief walk around the figure. Please note that Big O's sculpt is very anime accurate and he really looks great from every angle. I even don't mind the exposed screw holes in the back because they sorta fit in with Big O's "steampunk" aesthetics, with his boiler like chest and all the rivets. Also, note that in these photos I have Big O with his open articulated hands. 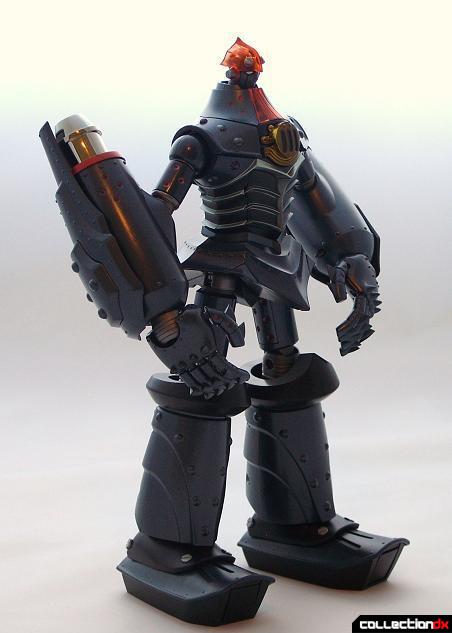 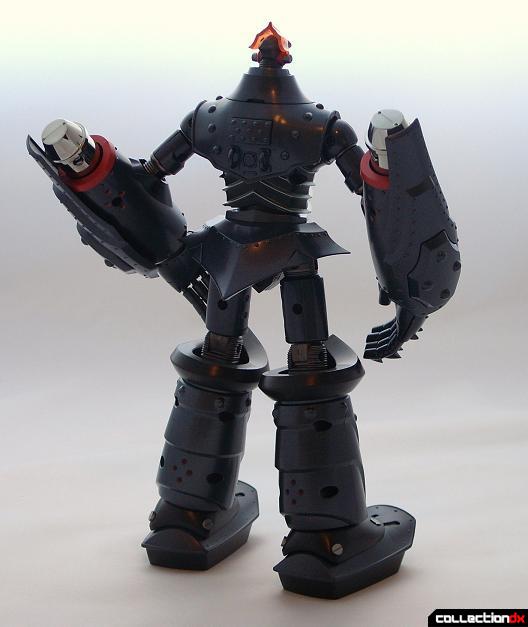 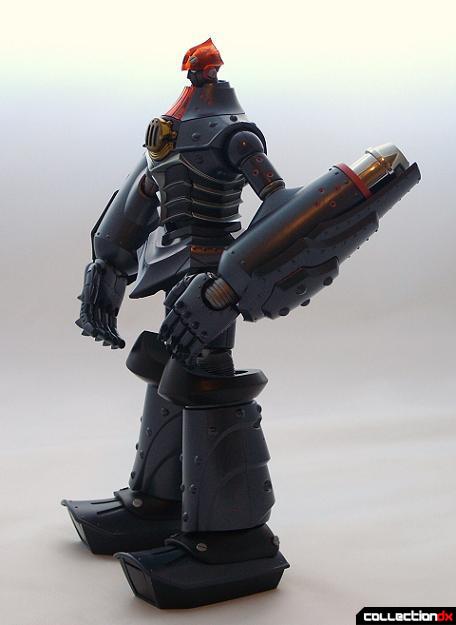 Moving right along to what I consider the "good stuff". Of course, I mean the gimmicks/play value.

First off, we have the "Cannon Party" upper chest cannons and the "Missile Party" torso missile cluster. Both parts are easily swapped out and affixed. You basically remove his original torso piece and lift his upper chest and attach said pieces. No, I did not come up with either of these bizarre weapon names. I actually took them right off the back of the packaging. Party weapons... LOL! 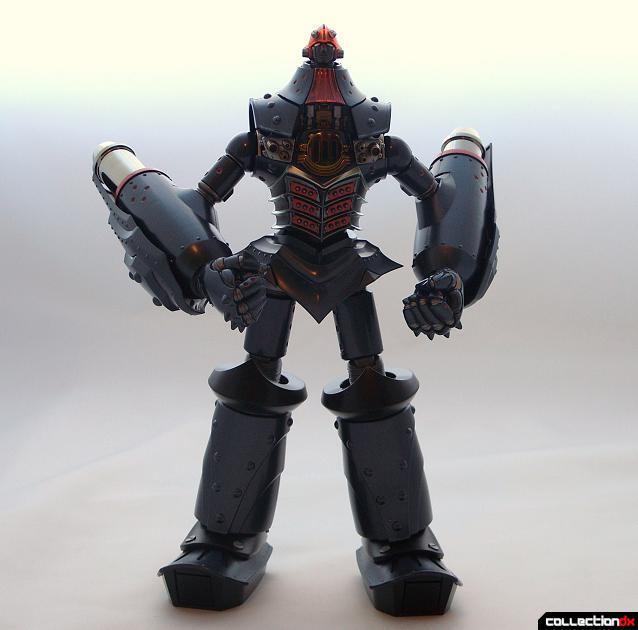 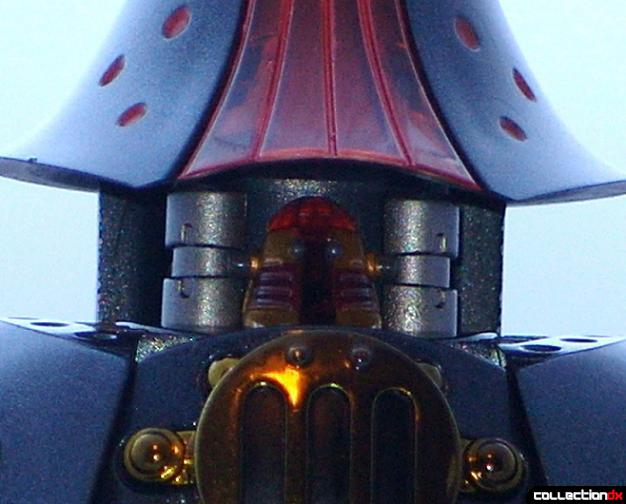 Next weapon is the "Sudden Impact", piston punch gimmick. You use this weapon by simply pulling back on the chrome-plated arm piston until it clicks. It releases with some pretty decent force when you push on Big O's fist. Its a pretty cool gimmick and it is one of my favorite things from The Big O anime. 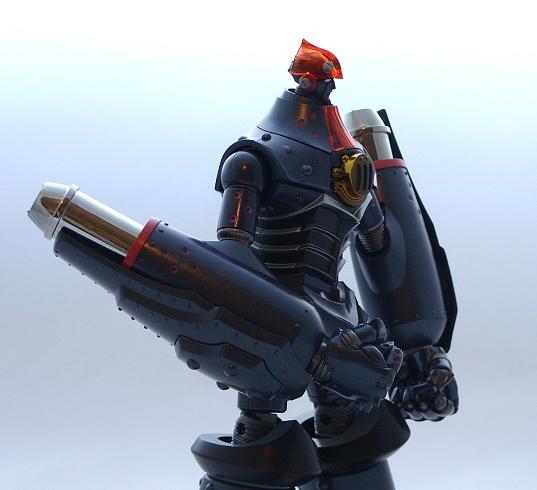 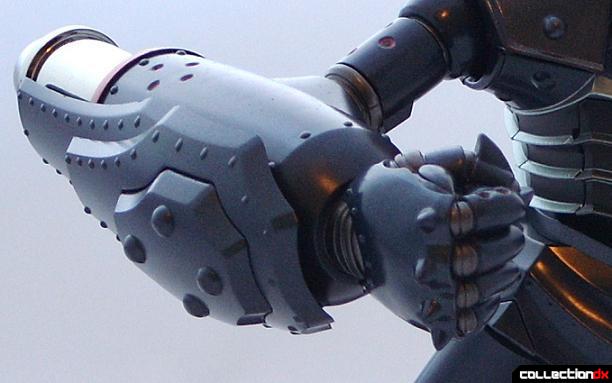 Another really cool gimmick is that you can pull up on Big O's collar area to reveal Rogers cockpit! The cockpit is very hard to see in the photo, but I assure you that it is just like the anime, right down to the translucent red pieces. You can totally picture Roger in his command seat with Dorothy next to him.

The next few photos I would like you to check out the detail of Big O's chest and head, Notice that his face has that anime accurate blank stare. Also, check of the translucent red piece that adorns the top of Big O's head. I also love the gold chest piece, it totally reminds me of a steam boiler. 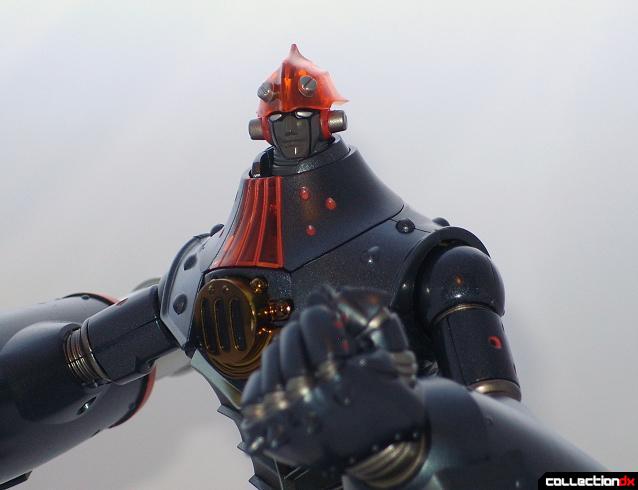 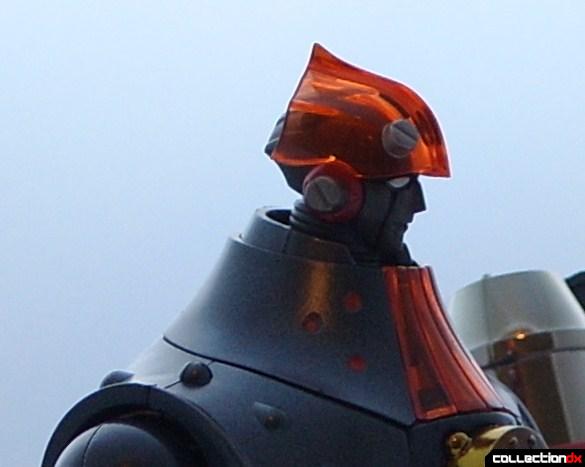 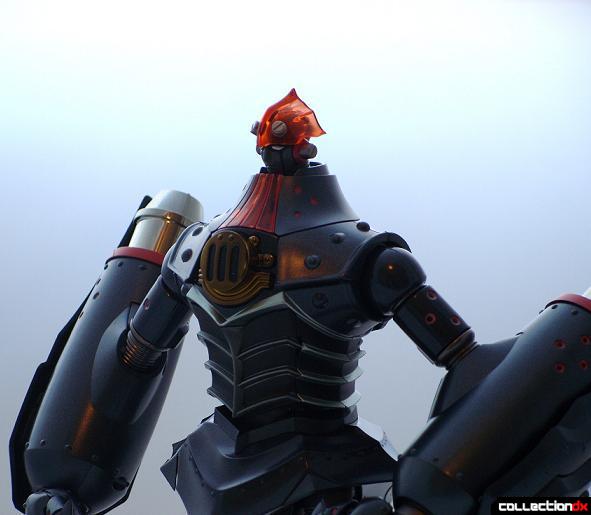 Well, he is a really nice gokin', but is he poseable? The answer would have to be yes! The Big O features a ton of articulation and is very sturdy in any pose because of his nice and tight, ratcheting joints. Big O features 13 points of articulation and even has a waist joint. In the second photo below you will see that some of his impressive articulation is achieved via an extendable area between his legs that allows for greater movement. Big O also has extendable knees for the same purpose. 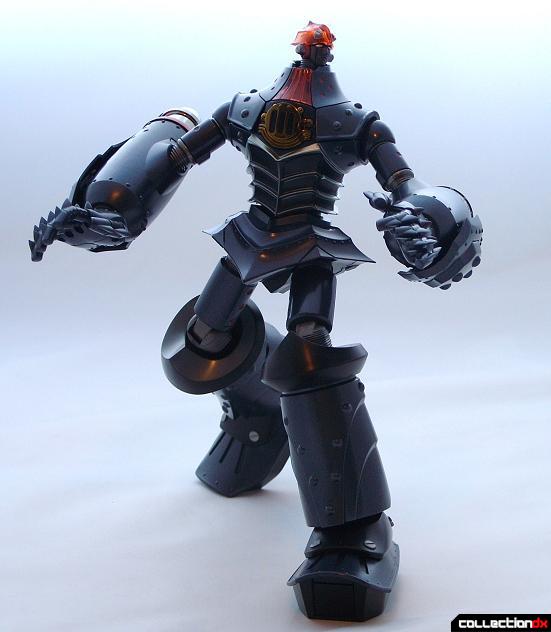 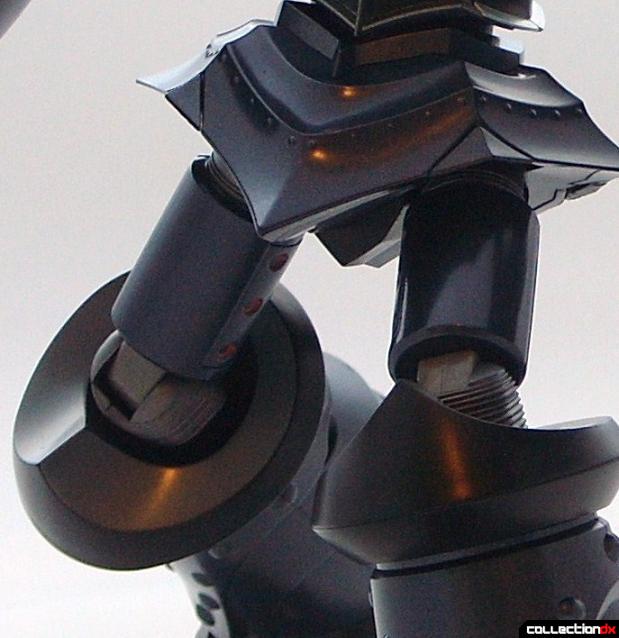 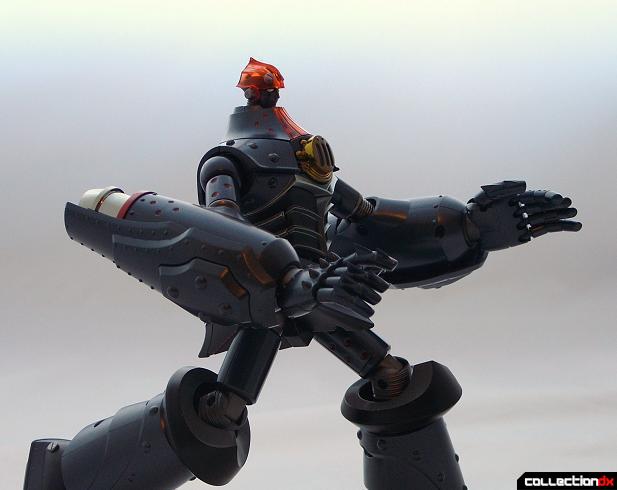 I apologize for the blur and my sausage finger for being in this next photo. I wanted to show you the cool spring-loaded suspension piston in the ankle. This totally reminds me of the old Takara Dougram figures that had suspension in the legs. 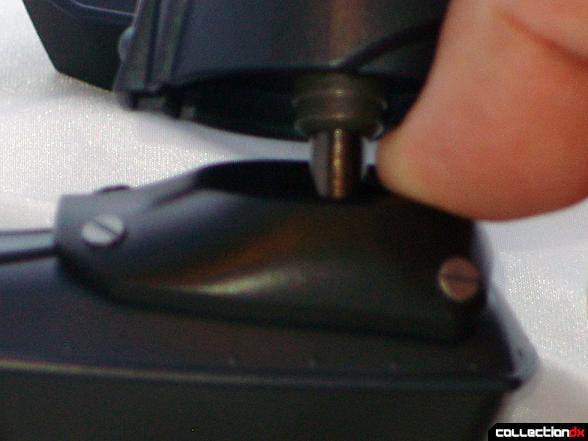 I almost forgot this cool gimmick. On each foot is a small hatch that you can store Rogers car inside of. Just like the anime! Yes, they do sell a weapon add on set that will be reviewed here on CDX in the future. In that review, you will see Rogers sleek black car that fits into the foot. 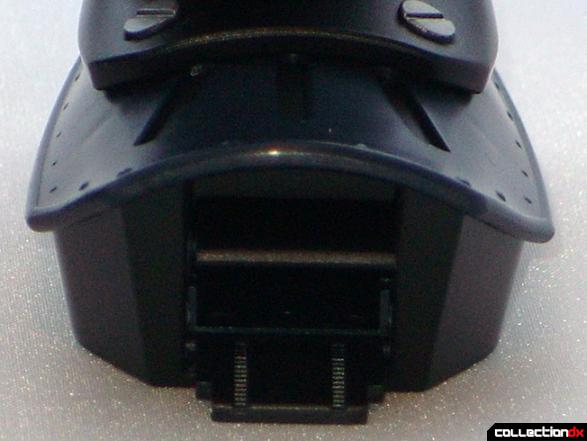 In conclusion, I really love this figure and I have to recommend it to everyone who is a fan of The Big O. It truly is the best toy replica of this iconic figure to date. The only suggestion I have is that you track down the weapon add on set to really make this figure complete. 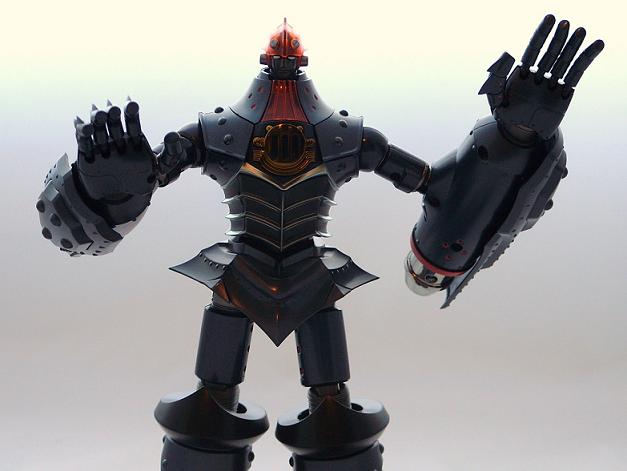 12 comments posted
this is a great toy. I

this is a great toy. I usually think the SOC's come with too much kibble, but Big O feels a little anemic to me. Bandai obviously split up the intended accessories, maybe to make the base figure more palatable, which is fine. But they couldn't include Roger's car? I'd pay an extra nickel for the car. However, Big O is one of my favorite robots of all time, and I'm just happy to have a sweet gokin of him. Terrific review!

I have to agree, This set should have atleast included Rogers car... Maybe they will release a with everything included in the future. Knowing Bandai, they probably will.

I really would love to see Big O's nemesis, Big Duo done in the SOC treatment, However I doubt that will ever happen.

I haven't handled this in person, but after reading this review a few thoughts come to mind:

1. The pistons in the arms BEG to be metal, yet they are not.
2. The expanding chest gimmick could have totally been built in, the parts swapping seems like a cop-out
3. I really, REALLY hate that you need to get the chains and weapon effects separately, as an exclusive. That will add over $100 to the price of this figure, which in my mind is totally unacceptable.

Otherwise, though it looks really nice.

like the chains and car add on but have seen for almost equal to what I paid for the figure...which for some chains and couple of translucent fist and a little black car is totally unacceptable...

Right now I hate all the collectors who can afford this toy. Big O is one of my favourite robot series in anime and a great example of retro-futuristic mechas in prime shape. So it's only logical that I want one, just like I want a Yamato's VF-1S... Eh, good to have dreams, right? :P

I too own this figure (and will own the Expansion Parts set as well as soon as it ships out to me from Japan!) and love it to death. Far and away the best Big-O ever made.

That said, I would've liked to see the "articulated" hands feature fully articulated fingers instead of only bending at the knuckles. I also found that the figure requires a surprising amount of force to swap the hands.

Releasing the whole damn thing together would've been nice too, but being the poor, pathetic little man that I am, I reluctantly caved and splurged on the Expansion Parts set when the preorder came around, fearing that its value would only go up once the orders were closed.

The Big-O is one of my favorite mecha ever, and one of my favorite mecha shows, so you can bet that I'm very excited to finally be "completing" this excellent Soul of Chogokin release. While I think the shenanigans with breaking up the parts will keep most casual mecha and gokin fans away, I really do hope the big (har har) fans of the show like me will have soldiered ahead and given this guy a place in their collection.

Hi delta7890. I agree with you on the hand swap. Most likely due to the piston gimmick that allows the peg to recede into the forearm. I have also noticed that on my figure, the waist is very hard to turn from side to side. I actually thought it might break when I first tried to move it.

Err... excuse me everyone. Haven't you guys forgotten somebody significant that makes this piece worth the 169$ sale?

I'm talking about The Big's pilot...

Just think about this for a moment; what good is this SOC steam-mech worth without a cool dude like Roger Smith to pilot it? More than that, what about a R. Dorothy or a Butler Norman to add to this Gokin?

This Big-O is impressive and beautiful, but it's INCOMPLETE.

The SOC Bandai team ought to know better to leave those characters OUT of this piece.

it's THE CHARACTER itself that makes this piece worth the money.

A gimmicky neck opens the cockpit without a small pilot figure to put inside Big-O ? It's...

It makes the Yamato's Chogokin Giant Robo look like a saint because it comes with Daisaku & Ginrei in 2 exclusive variants.

I mean c'mon here guys. 8 years of waiting and they pulled this stunt by leaving Roger out of it?!

Not big enough for the man who carry it's weigh.

For the man is NONE.

I'm very grateful for the review Dan. I love Big O, we all love Big O, but you've got to admit--this black beauty is lifeless without it's pilot, it's tomato, it's spark, it's charm. A charm called Roger... THE MAN.

I don't think the scale of this figure warrants a Roger Smith to go with it. Do you own the Chogokin? That cockpit section is very, very small, about the size of the fingernail on my pinky. A little Roger Smith would be smaller than a grain of rice! And in cases where pilot figures are provided that are grossly out of scale with the intended machine (such as the old Anime Collectors' Big-O toy) I just find it kinda cheap and tacky.

I won't dispute Roger Smith's badassery, but there's just no way they would've been able to include him in this set without making him far larger than he should be.

The car really should have been included...

Wish i could get one. but the only thing holding me back is the fact that to complete the set you have to buy an expansion pack. That and there are no villans from the series that could be used for a battle.